Chemokines and their receptors are important molecules mediating leukocyte migration and infiltration. Abnormal expressions of tumor-associated chemotactic factors in tumor tissues are significantly related to cancer progression, lymphocyte infiltration and specific anti-tumor immune responses. Recently, many studies have shown that the chemokine CXCL13 and its receptor CXCR5 were abnormally expressed in cancer tissues and contributed essentially to cancer progression (1). In the present review, we summarized the expression pattern and clinical significance of CXCL13/CXCR5 axis in human cancers.

Chemokines and their receptors

As small molecule peptides with a molecular weight of 8–10 kD, chemokines can specifically activate and recruit white blood cells (2,3). The amino acid composition of chemokines has a specific cysteine (Cys) motif. According to the characteristics of the conservative arrangement of Cys motifs, the chemokines can be mainly categorized into four subgroups (CXC, CC, C and CX3C) (4,5). Up to date, most of the chemokines belong to the CC and CXC subgroups, while only two C molecules and one CX3C molecule have been reported. Chemokine receptors are a group of G protein-coupled trans-membranous receptors that mediate the ability of chemokines and contain seven transmembrane domains (6). Chemokine receptors could be found in various immune cells, endothelial cells and neuronal cells, and each receptor has a retention region that binds to the corresponding chemokine ligand (7). The chemokines can participate in the physio-pathological process of infectious and metamorphic diseases, and chemokines as well as their receptors can also promote angiogenesis, tumor cell proliferation, survival and proliferation, involving in the process of organ-specific metastasis of malignant tumors.

Chemokine CXCL13 and its receptor CXCR5

CXCR5, also known as Burkitt’s lymphoma receptor 1 (BLR-1), is a member of the chemokine CXC receptor family, which is mainly distributed in peripheral mature B cells as well as in a small number of CD4+ or CD8+ T cells and the skin-derived migratory dendritic cells (8). CXCR5 has seven transmembrane domains, and it couples with GTP2 protein to form a transmembrane receptor. CXCR5 is an important molecule that enables B lymphocytes to home to lymph node follicles and to promote lymphoid follicular formation and lymph node development. CXCL13, also known as B cell chemokine 1 (BLC1), is a ligand of CXCR5 and a member of chemokine CXC family. The coding gene of CXCL13 is located in 4q21. Generally, CXCL13 is secreted by stromal cells in the B cell region of the secondary lymphoid tissue and expressed on the membrane of the follicular dendritic cell. CXCL13 can recruit B cells and directly regulate the maturation and development of B cells in vivo, and can participate in the transmission of immune system signals (9,10). CXCL13/CXCR5 axis contributes to the homing process of circulating naive B lymphocytes to lymph nodes, promotes the construction and the development of secondary lymphoid tissue, and facilitates the B cells to differentiate into functional B Cells. Recent studies have also shown that CXCL13 and its receptor CXCR5 not only are involved in maintaining the homeostasis of tissue environment, but also participate in the occurrence and treatment of autoimmune diseases as well as the repair of trauma (11-13). Moreover, many studies also showed that the CXCL13/CXCR5 axis played a fundamental role in regulating tumor occurrence and development, and herein we reviewed these studies and summarized in Table 1.

Sun et al. (15) have shown that CXCR5 is highly expressed in human gastric cancer cell lines BGC-823, SGC-7901 and HGC-27. The tissue microarray and immunohistochemistry have also shown that CXCR5 is highly expressed in human gastric cancer tissues, and its expression level is significantly correlated to tumor size and overall survival rate of the patients, therefore the examination of CXCR5 may have a great importance in the prognostic prediction of gastric cancer. Ding et al. (14) also confirmed that CXCL13/CXCR5 axis played an important role in the migration of CD40+ MDSCs to gastric cancer tissues, indicating that the expression of CD40 can up-regulate the CXCR5 expression and promote the migration and recruitment of MDSCs to cancer tissues. Wei et al. (30) also showed that higher CXCL13 expression level was associated with larger tumor size and poorer prognoses of gastric cancer patients, and could serve as a predictive biomarker of response to postoperative adjuvant chemotherapy in these patients.

Wang et al. found that CXCL13 is over-expressed in 62% of smokers and 45% of non-smokers in lung cancer patients (23). Mouse experiments also confirmed that the key carcinogen benzopyrene could induce the CXCL13 expression in lung epithelial cells, indicating that the important role of CXCL13/CXCR5 in PAH-induced lung cancer (23). Singh et al. (24) found that CXCR5 expression in lung cancer tissues (both squamous cell carcinoma and adenocarcinoma tissues) is significantly higher than that in adjacent normal tissues, they also showed that nuclear and membrane CXCR5 expression were higher in adenocarcinoma tissues in contrast to squamous cell carcinoma tissues. Moreover, serum CXCL13 levels in lung cancer patients were significantly higher than that in healthy controls (24). Thus all these data suggest that the CXCL13/CXCR5 axis can affect the progression of lung cancer, and both CXCL13 and CXCR5 can be used as bio-markers for lung cancer.

Cha et al. (29) investigated the pathogenesis of diffuse large B-cell lymphoma, and found that the peripheral CXCR5+CD4+ T cells could promote tumor cell proliferation by inhibiting lymphoma cell apoptosis. Moreover, CXCR5+CD4+T cells could promote the tumorigenesis via reducing cytokine IL-12 and enhancing IL-10 secretion, indicating that CXCR5 signaling plays an important role in tumor development in this malignancy (29). Kim et al. (28) examined the serum level of CXCL13 in patients with extranodal NK/T-cell lymphoma and analyzed its correlation with the Glasgow Prognostic Score as well as its prognostic significance, and the increased serum CXCL13 level of the patients is significantly correlated with the poorer PFS and higher GPS, larger tumor burden and poorer prognosis. Therefore, the serum CXCL13 level can be used as the prognostic indicator and a potential therapeutic target for these patients.

Sambandam et al. (34) reported that the c-Myc activation through CXCL13/CXCR5 axis signal pathway could stimulate the expression of RANKL in stromal or preosteoblast cells, which implicated that CXCL13 could serve as a potential therapeutic target to prevent invasion of bone/osteolysis in oral squamous cell carcinoma. Duan et al. (35) have conducted a 5-year follow-up of patients with hepatocellular carcinoma and found that the serum level of CXCL13 was significantly increased in cancer patients compared with healthy controls, and the immunohistochemical staining results also showed that the percentage of CXCR5+ or CXCL13+ cells in poorly differentiated patients was significantly higher than that in well-differentiated patients, and thus CXCL13 could be served as a potential biomarker for the recurrence in patients with liver cancer after hepatectomy. Del Grosso et al. (36) found that the malignant neuroblastoma cells could express CXCR5 and the Schwanno blast cells could express CXCL13, and the CXCL13 produced by stromal cells may contribute to the generation of an environment in which the malignant neuroblasts were retained.

Numerous studies confirmed that the abnormal expression of CXCL13/CXCR5 could be found in human cancer tissues, and CXCL13/CXCR5 axis plays an important role in the regulation of cancer cell proliferation, migration and metastasis (Figure 1), and thus contributes to the cancer progression and the prognostic prediction of cancer patients. In future, the validation of CXCR5 and CXCL13 as useful biomarkers for cancer diagnosis and prevention, and the potential value of clinical application of CXCL13/CXCR5 axis blockade as an effective therapy against human cancers still merit further investigation. 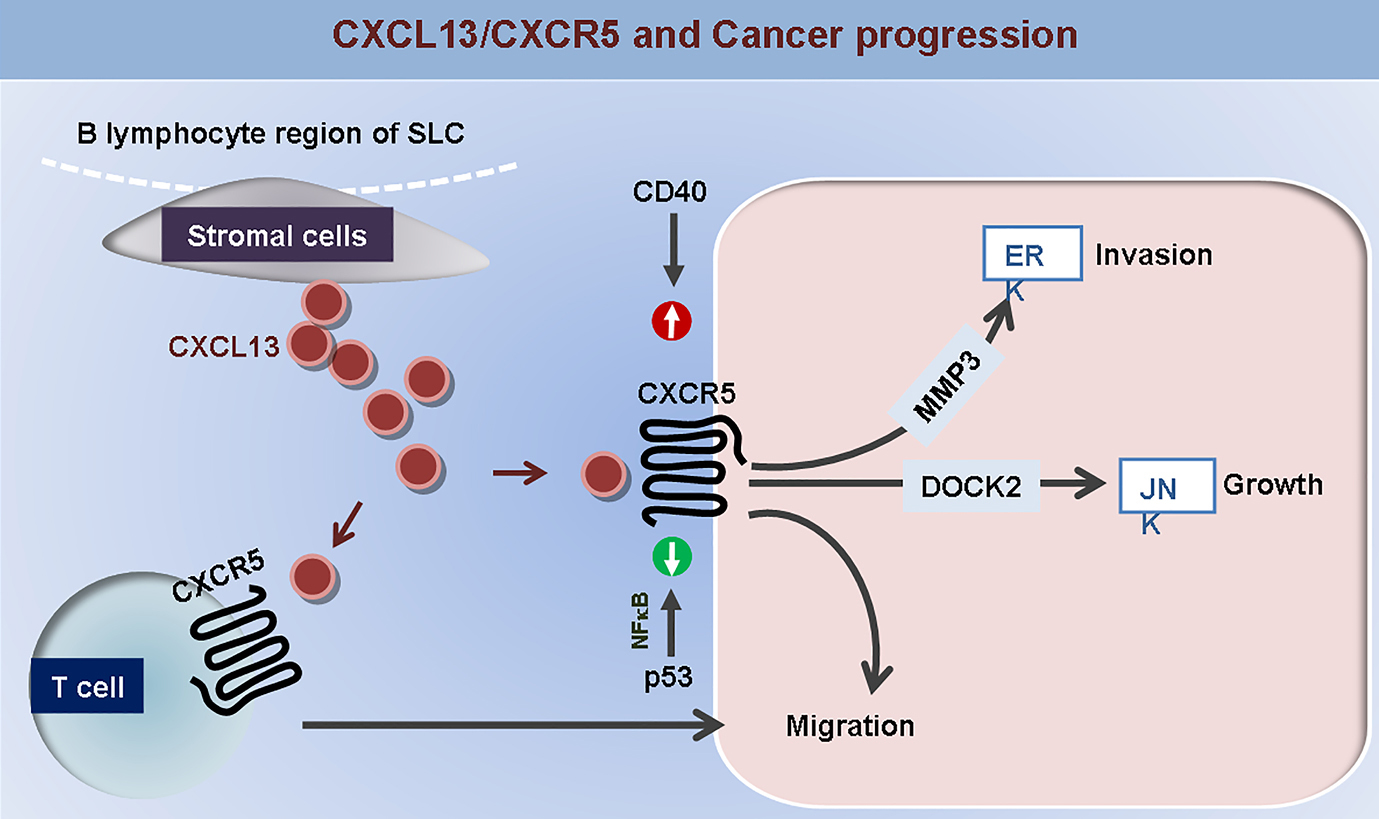