Keratoacanthoma (KA) is a well-differentiated, yet progressively growing skin tumor with dome-shaped papules and a keratinous plug in the center. Although it is regarded as benign, KA shares histopathological features with squamous cell carcinoma (SCC) (1). There are several types of KA: solitary KA (self-healing, with three phases: a growth phase, mature phase, and fading phase); multiple KA (Ferguson-Smith disease, Muir-Torre syndrome, and Grzybowski’s generalized eruptive KA); and several other KA variants [giant KA, subungual KA, intraoral KA, and keratoacanthoma centrifugum marginatum (KCM)] (2). Mohs surgery is considered to be the first-line treatment for KA (3), and relapse seldom occurs if the lesion is removed completely (4). Additionally, KA “metastasis” has been found to be mostly a misdiagnosis of SCC (5). While neurological infiltration can be seen in KA patients, it has not been found to influence the prognosis of patients with KA (6).

KCM, which is characterized by progressive lesions including annular plaques with central healing, is a rare variant of KA that was initially described in 1962 (7). Several KCM lesions in one patient can be diagnosed as multiple KCM, which is an extremely rare disease that is occasionally described among KCM cases. Because of the multiple lesions, treatment and prognosis of patients with multiple KCM can be different from that of patients with solitary KCM. Here, we report a typical case of multiple KCM in a female patient and review the published literature.

A 63-year-old female attended our outpatient department because of multiple enlarged plaques, which she had first noticed 11 months earlier. Initial papular lesions (Figure 1, forehead) had grown progressively in size but spontaneously resolved at the center to form marginal plaques (Figure 2, left cheek). She had type II diabetes mellitus for 10 years, and diabetic nephropathy was also diagnosed. 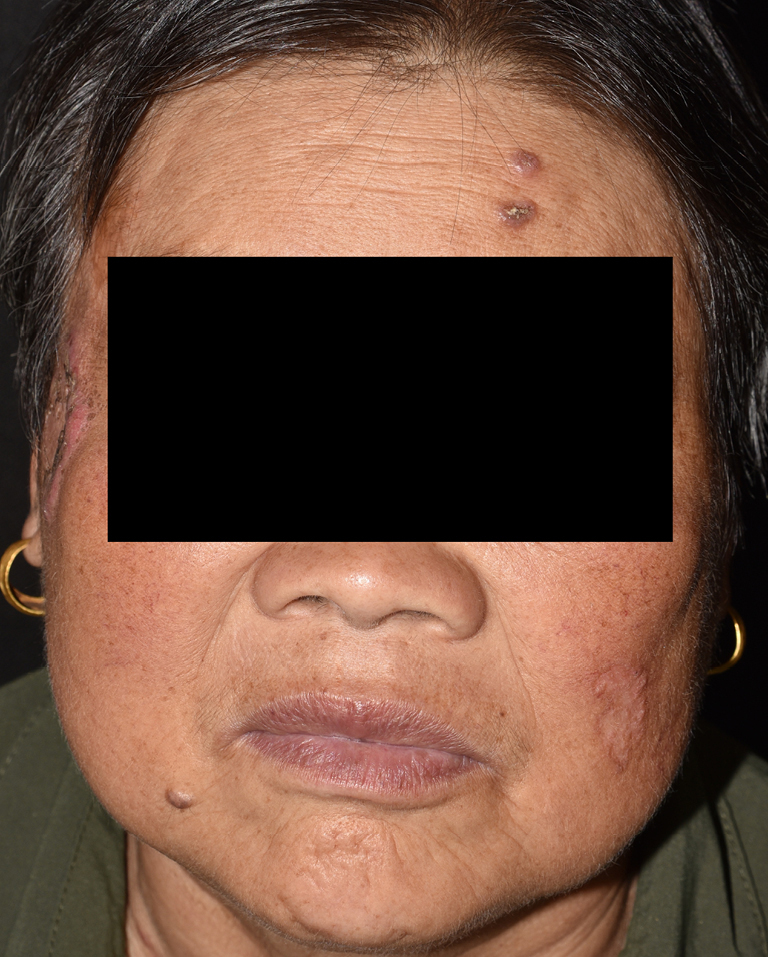 Figure 1 Scattered bronze papules with central plugs on the forehead. 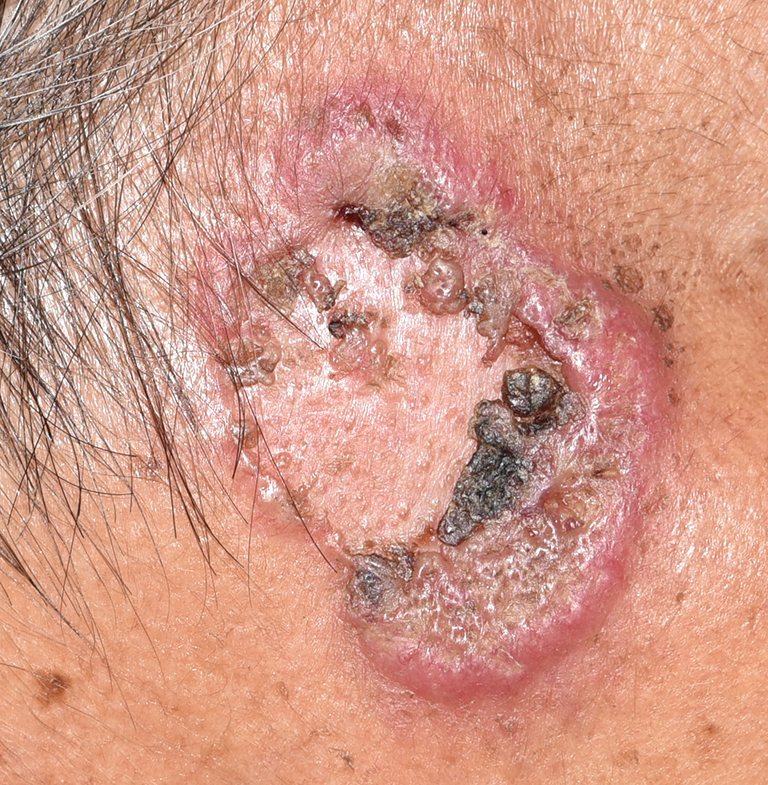 Figure 2 Erythema elevatum at the margins of resolved central lesions.

Physical examination showed crater-like papules on her forehead and erythema elevatum with centrally healing plaques on both her cheeks. No enlarged lymph nodes were found. Histopathological examination revealed a crater-like structure with enclosed keratosis in the epidermis (Figure 3). There was acanthosis, elongated rete ridges, and chronic inflammatory cell infiltration in the dermis. A mass of well-differentiated squamous cells was found in the dermis (Figure 4). Results of laboratory examinations showed serum creatinine at 112 mmol/L and gamma-glutamyltransferase at 74 U/L; human immunodeficiency virus antibody test results were negative. Rapid plasma reagin and Treponema pallidum particle agglutination test results were negative. No fungal hyphae or spores were found by microscopic examination. 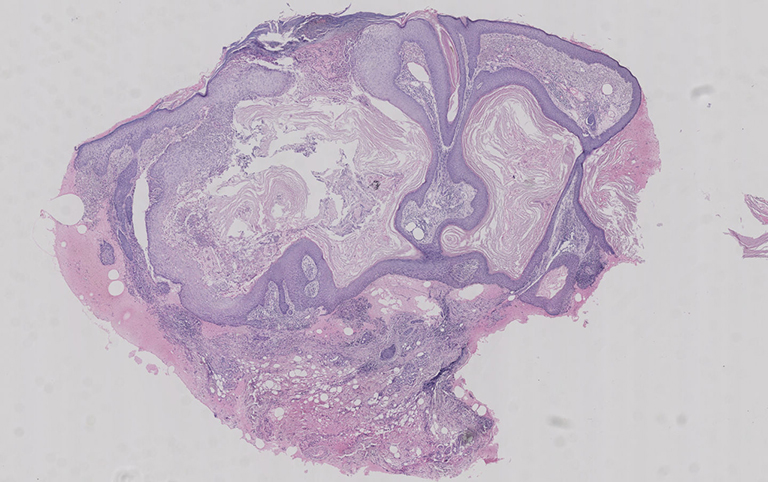 Figure 3 Acanthosis, elongated rete ridges and a crater-like structure with enclosed keratosis in the epidermis, and chronic inflammatory cell infiltration in the dermis (hematoxylin and eosin; magnification, ×10). 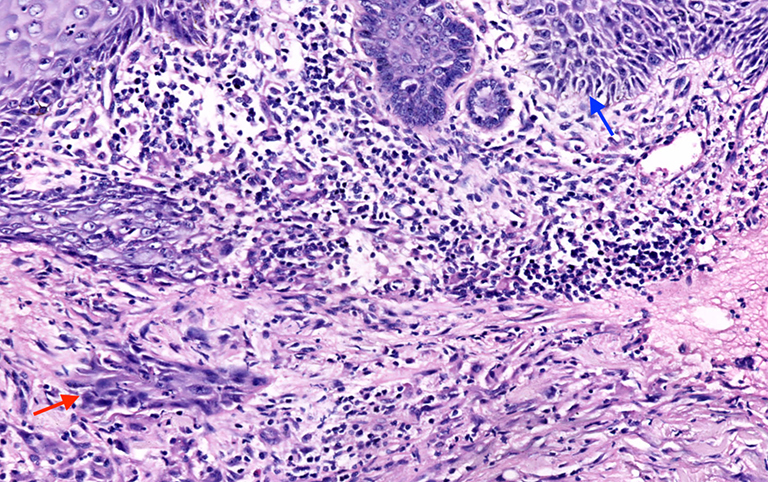 Because of her typical lesions and pathological changes, this patient was diagnosed with multiple KCM. The differential diagnosis in this case included fungal infection, basal cell carcinoma, SCC, and creeping perforating elastic fibrous disease. Imiquimod ointment was used instead of retinoids because of her abnormal liver and kidney test results. At 6 months, the skin lesions had not improved. All of her lesions grew in size with central healing and marginal erythema. She was lost to follow-up after 6 months.

The systematic review presented herein aimed to summarize the clinical characteristics of multiple KCM, with an emphasis on treatment and prognosis.

A systematic literature search and review were performed in March, 2018 (updated July, 2018) using MEDLINE, EMBASE, Cochrane, and SinoMed databases. Searches were structured to identify all article types including “keratoacanthoma centrifugum marginatum,” without time limitation. Following database searching, all duplicates were removed. The titles and abstracts of identified articles were then manually screened to assess their relevance to the review. Inclusion criteria were as follows: (I) the article focused on multiple KCM with individual case(s) reported; and (II) the full article could be accessed. After the first round of screening, full text articles were obtained and reassessed based on the inclusion criteria. Two reviewers (Y Wang and W Zhao) performed each screening stage independently. Differences in opinion were discussed and resolved with a third reviewer (L Li).

There were 126 initial search results from four databases. Seventy-nine articles remained after deleting duplicates. No clinical studies have been reported. Titles and abstracts were screened, and 14 articles were about KA (including two review articles) while 54 articles were about solitary KCM (including one review article). Eleven articles reporting multiple KCM were assessed further. One unavailable article was eliminated, and ten studies were finally included in our review (Figure 5). All of the included articles were case reports, and overall, ten patients were included in the analysis. 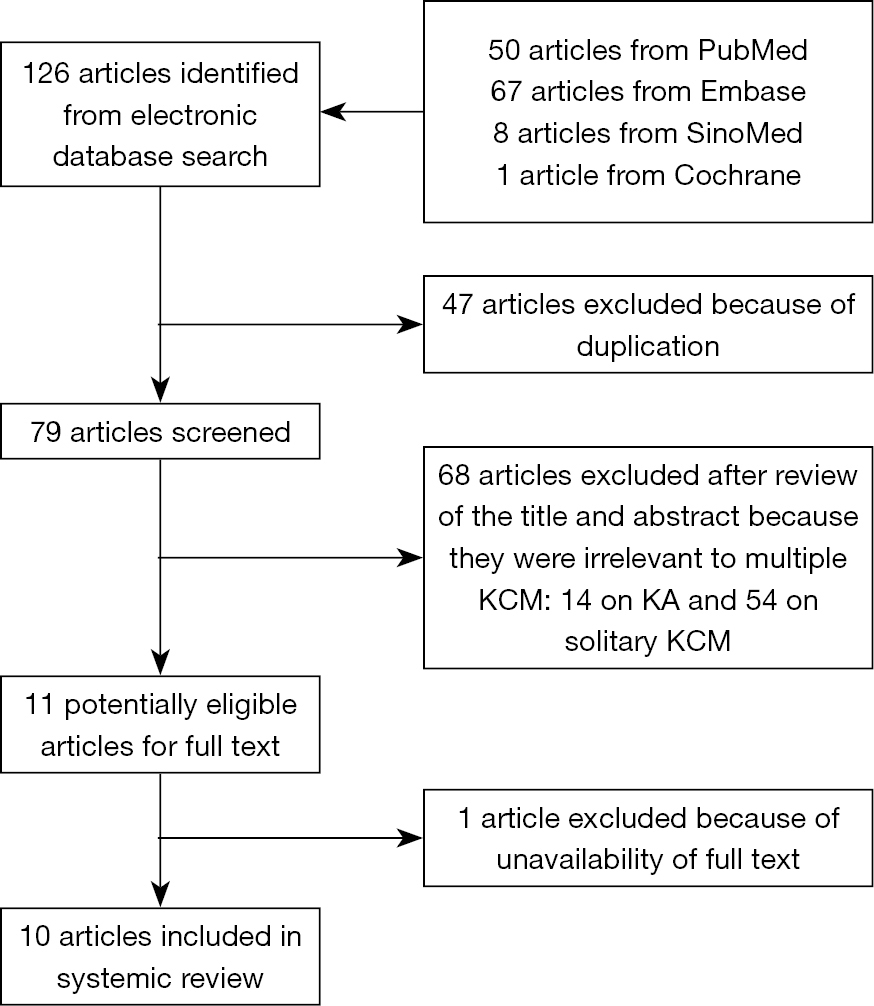 Clinical features, treatment, and prognosis are summarized in Table S1 (8-17). All patients presented with multiple papules, which subsequently exhibited progressive growth and coincidental central healing. The male-to-female ratio was 7:3. Various age groups can develop KCM (5–65 years). The course of multiple KCM before medication varied from 3 months to 30 years. Two patients reported themselves to have contacted kerosene oil/diesel or pesticide before they developed multiple KCM (90%). The limb extremities were the most common sites of multiple KCM lesions. No family members were involved in all reported cases. In regard to combined diseases, one patient had concurrent colic polyp, and one had concurrent schizophrenia.

Based on the ten articles that recorded patients’ treatments and outcomes, seven patients were treated with retinoids while two patients did not achieve remission (one had no response and one had partial improvement). One patient had severe side effects. The two patients who did not achieve remission during initial treatment were then treated with methotrexate (and prednisone) and their symptoms resolved. The patient with side effects was subsequently treated with imiquimod ointment and their symptoms resolved. Laser therapy was used to successfully manage two patients: one patient received combined treatment with a topical retinoid, and the other used an anti-histamine as a combination treatment. All patients were cured after therapy, and no relapse was found in patients who returned for follow-up visits.

Our case presents a patient with typical multiple KCM on the face. The patient was a farmer in her youth, so her face might have been exposed to sunlight and pesticides. Our treatment (topical imiquimod ointment) was ineffective in this patient, although similar treatment was reported to be successful in another KCM patient in 2007 (12). Our patient’s diabetic nephropathy posed a major threat to effective treatment using retinoids, as has been reported for KCM (18), including multiple KCM (16). No prognosis could be determined after 6 months, because unfortunately, the patient was lost to follow-up.

The pathogenic mechanism behind KA, including KCM, has not yet been defined. Clinically, KA is often related to ultraviolet radiation, occupational exposure to tar/pesticides, and human papillomavirus infection. KA can also sometimes occur at previous lesion sites such as wounds, eczema, psoriasis, and seborrheic dermatitis (1). Pathologically, cells differentiate into the outer root sheath of the follicular infundibulum, which differentiates KA from SCC, and develops from actinic keratosis. Keratin 1 and 10 are expressed at low levels, while keratin 14 and keratin 16 are expressed at the center of the tumor. Other potential mechanisms behind KA include abnormal chromosomes, H-ras gene activation, and lower Ki-67 expression at the tumor center compared with SCC and other lesions (19).

Our systematic review retrospectively summarized articles from four databases that describe patients diagnosed with multiple KCM. Thus, we discuss the characteristics, treatment, and outcomes of multiple KCM. Although multiple KA often occurs in family members, multiple KCM seems to arise individually, without family aggregation. Because KCM is recognized as a benign SCC, chemotherapy has not been reported as regular therapy (20). Instead, surgical excision is often used for solitary KCM. Multiple KCM is mostly treated with systemic or topical medication, especially retinoids. Immunosuppressants and/or corticosteroids can be used as a second-line treatment if the lesions are unable to be controlled. Laser therapy can also be used, combined with topical retinoid treatment. Although surgery is recognized as a first-line therapy in patients with solitary KCM (21), it is not suitable for multiple KCM because of the number, size, and location of lesions to be removed. In our patient, all lesions progressed before treatment and continued to progress when treatment was ineffective. Thus, no spontaneous resolution of multiple KCM was reported in the reviewed cases.

The progressive nature of KCM lesions makes its status as a benign tumor controversial. On the one hand, the clinical manifestation of KCM progresses quickly. Some uncontrolled KCMs progress into SCC or other malignant skin tumors, and some researchers believe that it is a benign type of malignant tumor. Additionally, few cases have been reported of spontaneous KCM resolution, making KCM a distinct variant of KA (which is able to spontaneously heal) that needs to be treated to prevent progression into cancer. On the other hand, KCM is also recognized as a benign tumor because it can be resolved by treatment with medication or surgery without relapse or metastasis. Additionally, little cellular heterogeneity is seen in KCM and the cells are mostly well differentiated.

Because KCM, especially multiple KCM, is an extremely rare disease, only case reports have been published to date. Further investigation is required to discover the underlying mechanism of this disease, and the most effective treatments. Determining the underlying mechanism of, and effective treatments for, multiple KCM could help us to better understand KA and other skin tumors of the follicular infundibulum.

Multiple KCM is more prevalent in male patients and on the limb extremities. However, as shown in our case, female patients with lesions on the face have also been observed. No family aggregation was found. Although multiple KCM progresses rapidly without treatment, proper treatment (including retinoids, immunosuppressants, and laser therapy) often leads to a favorable outcome.

We thank Jodi Smith, PhD, from Liwen Bianji, Edanz Editing China (www.liwenbianji.cn/ac), for editing the English text of a draft of this manuscript.