Cancer is currently one of the deadliest diseases known to man, and a major threat to human health. A reported 1,688,780 new cases and 600,920 associated mortalities are estimated to have occurred in the United States in 2017 between January and September (1). Due to diagnosis delays, disease recurrence and chemoresistance, the prognosis of cancer is typically poor and the survival rate is low (2,3). Therefore, current research is focused on identifying potential novel prognostic biomarkers for cancers (4-6).

Long non-coding RNAs (lncRNAs), longer than 200 nucleotides in length, are a class of newly identified non-coding transcripts (7,8). During the past decade, lncRNAs have attracted attention and prompted a series of recent studies due to their regulation of multiple cancer-related cellular processes, including proliferation, invasion, metastasis, angiogenesis, apoptosis and chemoresistance (9-14). This suggests that lncRNAs may turn out to be a promising biomarker for prognosis prediction in cancers (15,16).

X-inactive specific transcript (XIST), derived from the XIST gene, is a newly identified lncRNA which plays a key regulatory role in X inactivation during female mammalian development (17). Increasing studies have revealed that the expression of lncRNA XIST not only plays an important role in the differentiation, proliferation, and genome maintenance of human cells, but it is also involved in cancer cell proliferation, invasion, epithelial-mesenchymal transition (EMT) and metastasis (18). Recently, a growing body of research has shown that XIST is overexpressed in cancer, including non-small-cell lung cancer (19), glioma (20), ovarian cancer (21), and hepatocellular carcinoma (22). Despite this evidence, few meta-analyses have been adopted to determine the association between XIST and cancer prognosis. Therefore, we designed this meta-analysis to investigate the prognostic value of XIST in various cancers.

This meta-analysis was conducted in-line with the PRISMA guidelines (23). Literature from the PubMed, Cochrane Library, EMBASE, Web of Science, CNKI and Wan Fang databases were screened for articles published up to August 2017. The search included the following key words: “XIST”, “long non-coding RNA XIST”, “cancer”, “tumor”, “carcinoma” and “neoplasm”.

The inclusion criteria were as follows: (I) a study of any type of human cancer; (II) the association of XIST expression levels with overall survival (OS), recurrence-free survival (RFS), or description of clinicopathological characteristics; (III) the method of detecting lncRNA XIST restricted to reverse transcription quantitative polymerase chain reaction; (IV) patients categorized into low and high groups; (V) sufficient data available for calculating the hazard ratios (HR) and corresponding 95% confidence intervals (CI). The exclusion criteria were as follows: (I) case reports, reviews, meta-analyses, and duplicate publications; (II) studies not presenting data with relevant values; (III) studies only focusing on the molecular mechanisms of lncRNA XIST.

Two reviewers extracted the data from each enrolled publication, including the first author’s name, publication year, country of origin, type of cancer, number of cancer stage, detection method and outcomes. When the HR and 95% CI for survival analysis could not be obtained, we calculated the HRs and the 95% CIs using Kaplan-Meier curves and observed data based on the methods outlined by Tierney et al. (24). The Newcastle-Ottawa scale (NOS) for cohort studies was also conducted to assess the quality of involved studies by 2 authors.

HRs and 95% CIs were used to evaluate the association between XIST and cancer prognosis. Furthermore, odds ratios (ORs) and 95% CIs were calculated to determine the associations between XIST and the clinicopathological characteristics detailed in the included articles. The Cochrane Q-test and P values were utilized to assess the heterogeneity. If significant heterogeneity was considered present (I2 ≥50% and P≤0.1), the random-effects model was selected to calculate the pooled HRs or ORs; otherwise, the fixed-effects model was applied. The Begg’s test was used to test publication bias. Statistical analysis was carried out using STATA version 12.0 (Stata Corporation, College Station, TX, USA). P<0.05 was considered statistical significance.

We retrieved a total of 332 articles based on the aforementioned search strategy and removed 105 duplicates, as shown in Figure 1. Following title and abstract screening, 30 accessible full-text articles were identified. A further 18 of those 30 articles were excluded due to lack of data or incomplete data. Finally, 12 studies, comprising a total of 841 patients, were chosen for the final analyses (25-36). Table 1 summarizes the statistical analyses of the 12 studies. 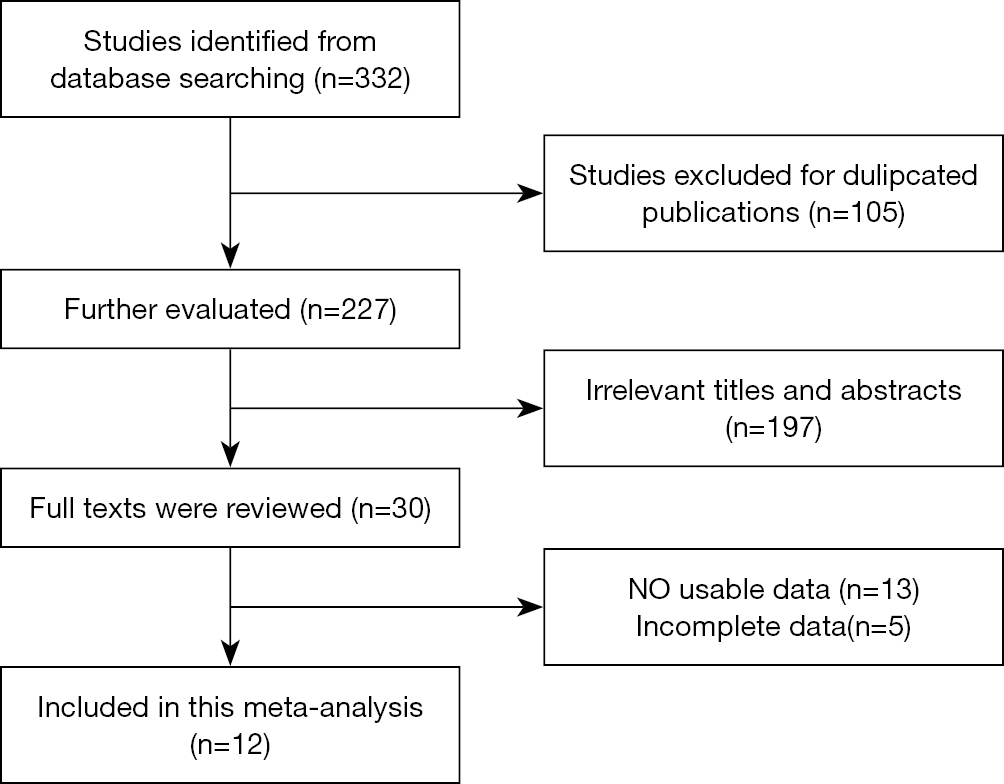 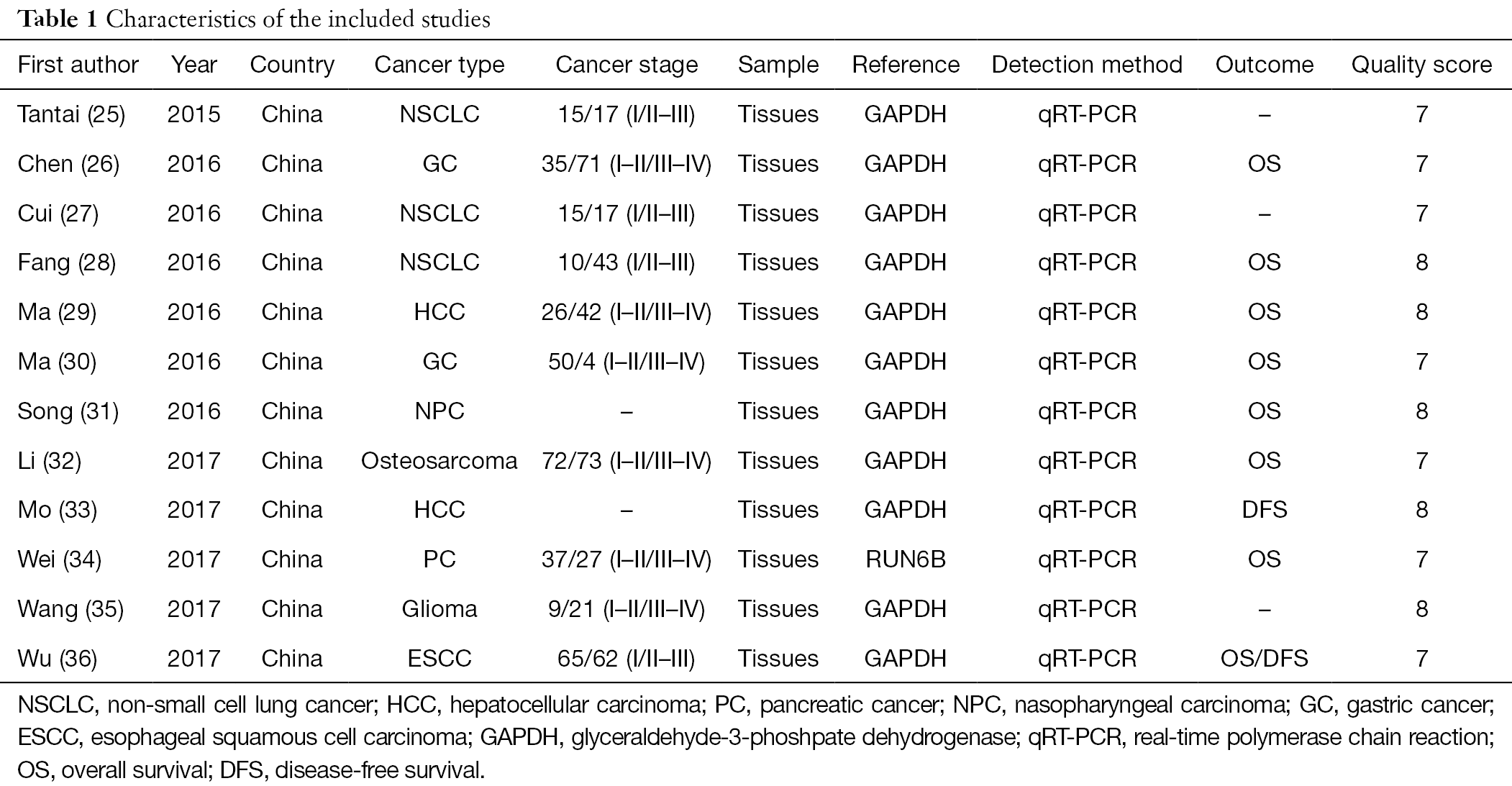 Association between XIST and prognosis 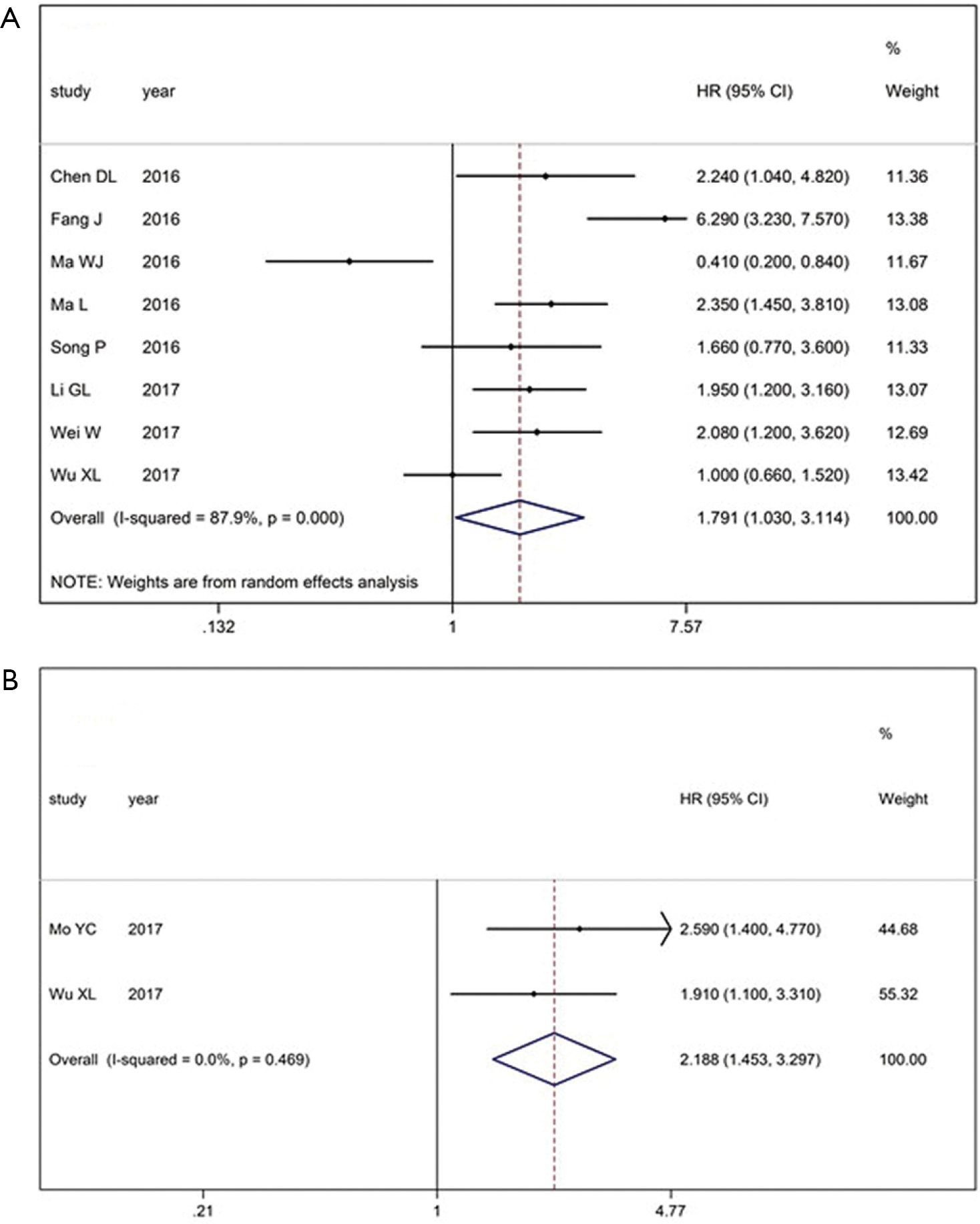 Association between XIST and clinicopathological parameters 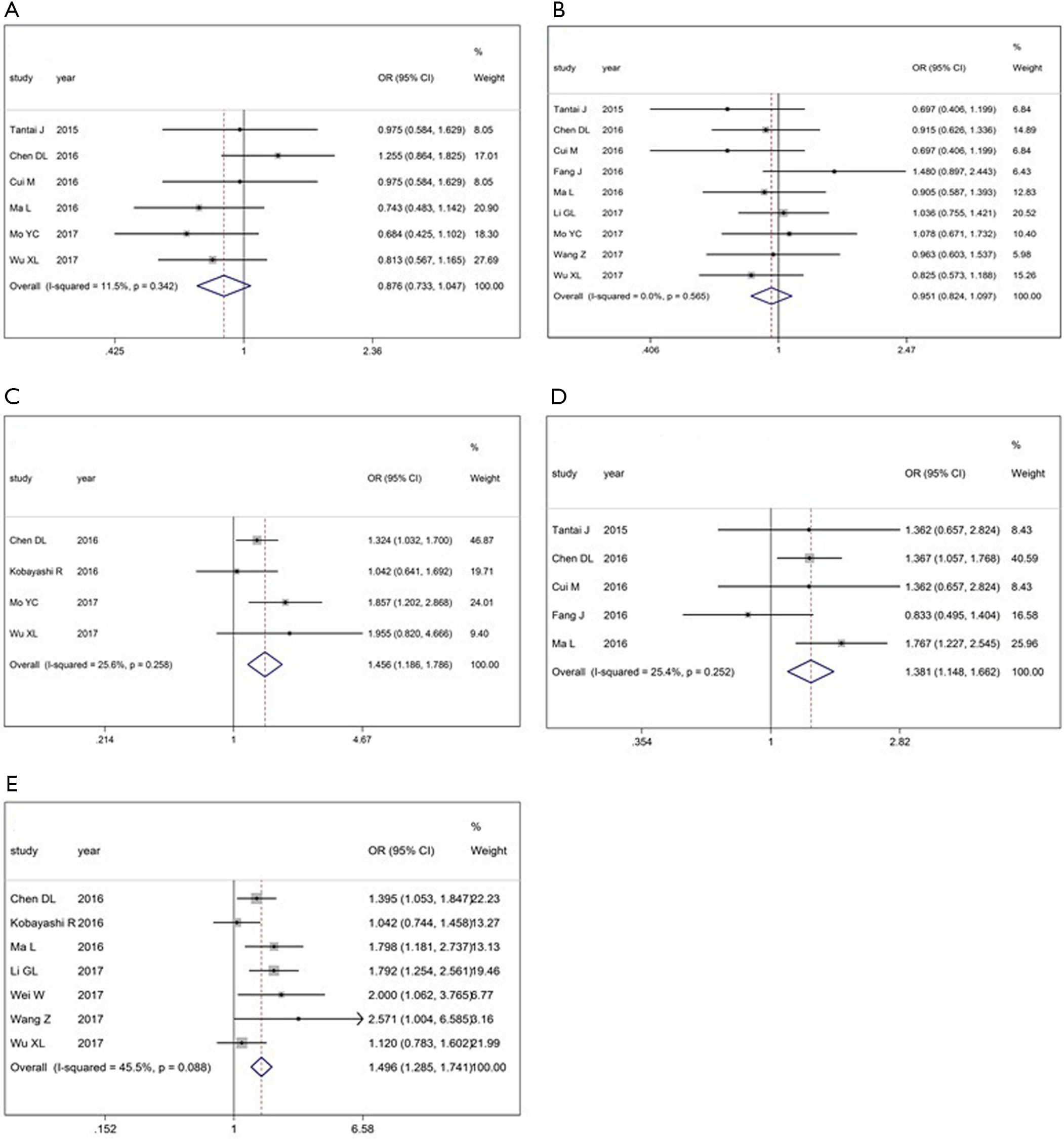 The Begg’s test was applied to assess publication bias in these studies, and no obvious publication bias in the studies was found (Figure 4). A sensitivity analysis was executed to determine whether any individual study affected the overall results. We found these results were not stable and more studies need to be involved in the research to validate the results in the future (Figure 5). 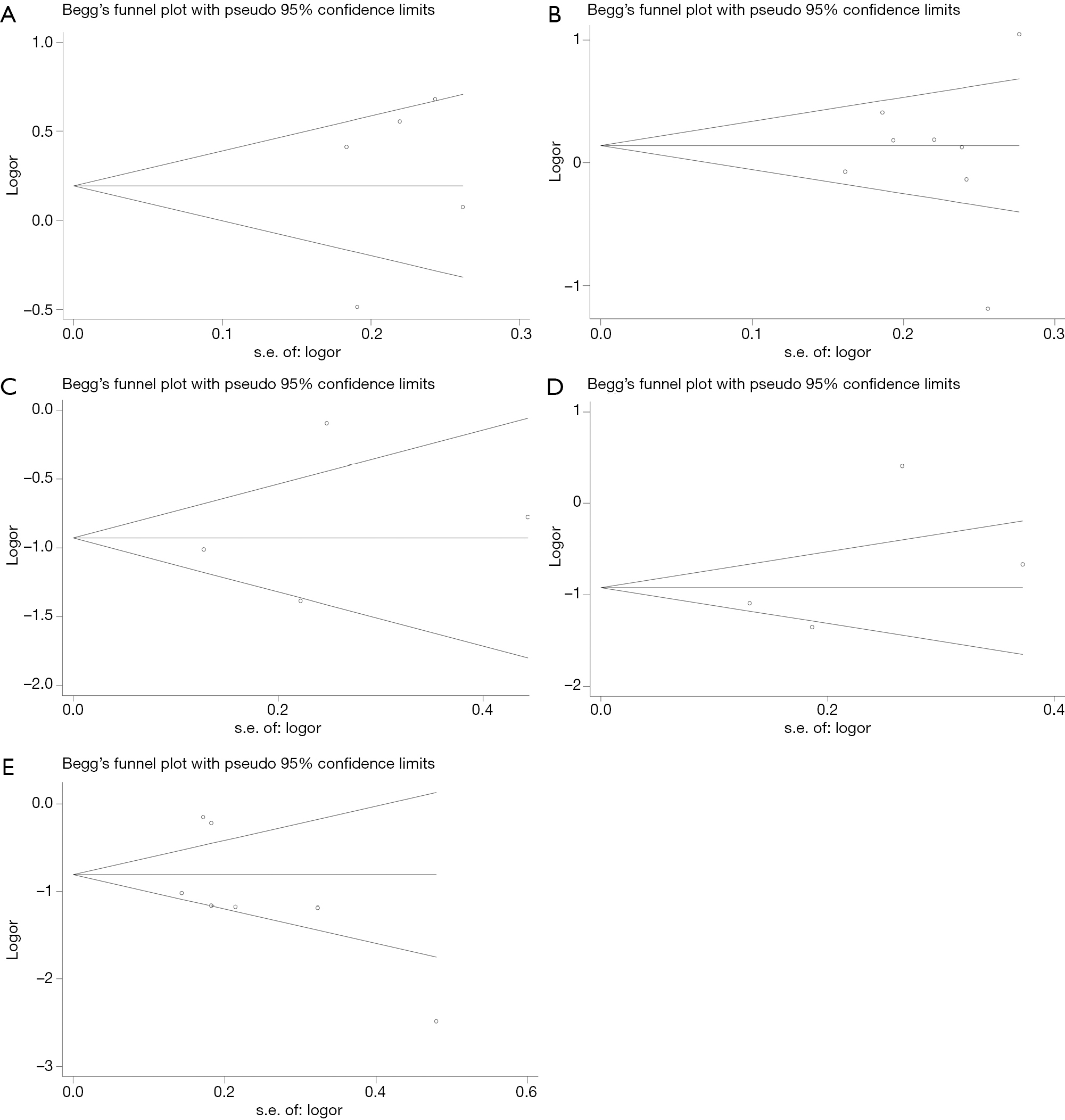 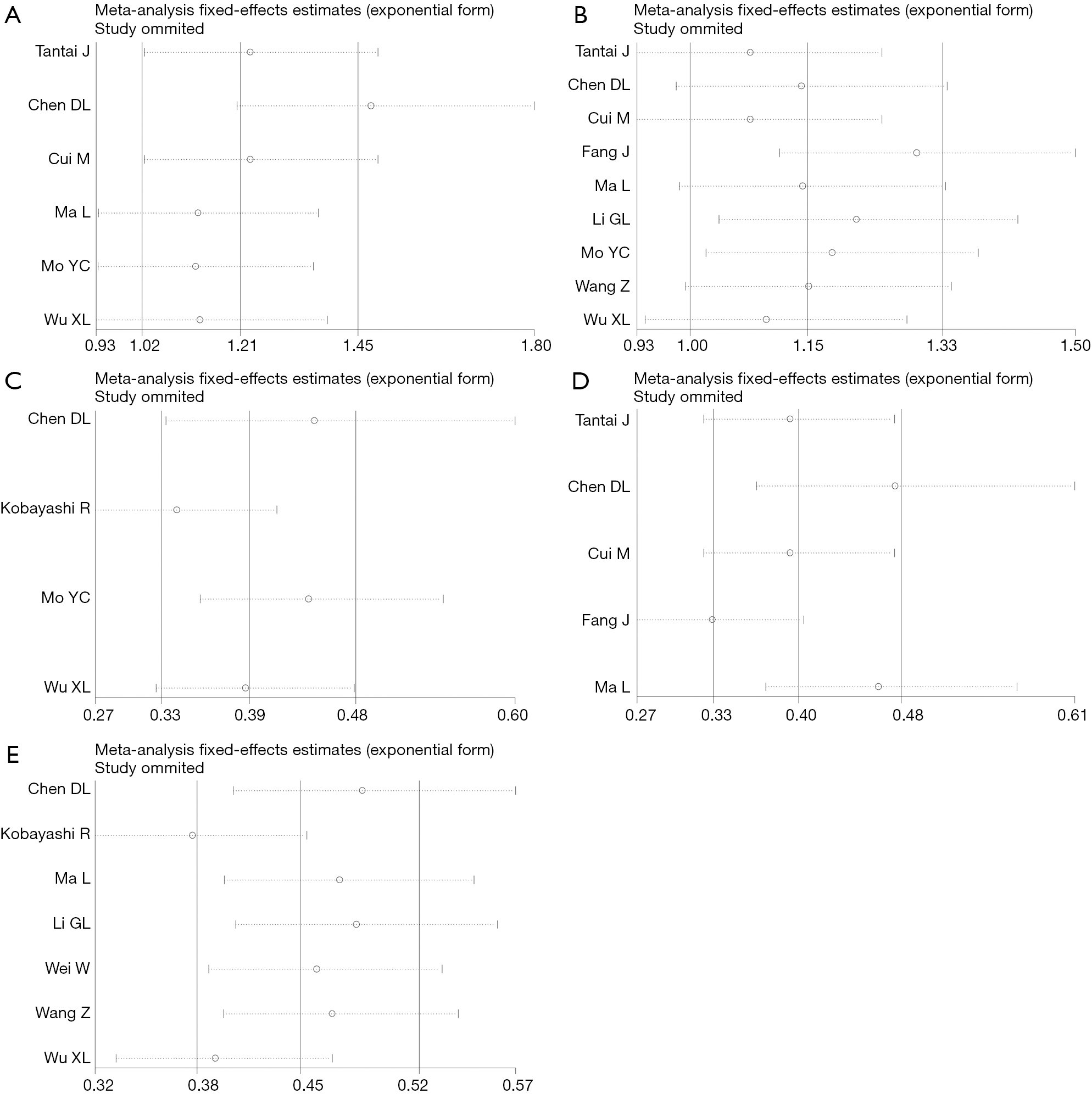 Recently, evidence from a growing number of publications have suggested that lncRNAs were dysregulated in various types of cancer and served key roles in the progression of various cancers (37-40). Moreover, lncRNAs may also be considered as promising biomarkers for estimating the prognosis of different cancers (41-43).

XIST, a lncRNA derived from the XIST gene, is a key regulatory factor of X inactivation in mammals (44,45). A series of studies have reported that XIST expression levels in cancer tissues are markedly high compared to those in the adjacent normal tissues (28,34). Accumulating evidence indicates that the expression levels of XIST affect cell proliferation, apoptosis, invasion and metastasis in various cancers (30,32,46). In one study, XIST was identified as an oncogenic lncRNA by competitively binding to miRNAs, thereby modulating the de-repression of miRNA targets (47). In addition to this, Wu et al. (36) observed that XIST contributed to the development of malignancies such as esophageal squamous cell carcinoma through competitive binding with miR-101 to regulate EZH2 expression. Moreover, Fang et al. (28) discovered that XIST knockdown could inhibit cell proliferation, migration and invasion via epigenetically silencing KLF2 expression in non-small cell lung cancer. From a prognostic perspective, high XIST expression was reported to be closely identified with poor prognosis in several types of cancers, including gastric cancer, pancreatic cancer, glioma, osteosarcoma, nasopharyngeal carcinoma, non-small cell lung cancer and hepatocellular carcinoma.

The purpose of this paper was to determine the prognostic roles of lncRNA XIST in human cancers. Based on the results, high XIST expression was proven to be significantly correlated with poor OS or RFS in patients with cancer. These results showed that XIST could act as a prognostic biomarker for OS or RFS in cancer patients. In addition, our findings demonstrated that high XIST expression was positively associated with tumor size, lymph node metastasis, and advanced TNM stage. Moreover, statistical analysis revealed that no obvious associations were found between high XIST expression and age or gender.

However, there were several limitations to the meta-analysis. Firstly, all the studies were from China, thus the results may not be applicable globally. Secondly, the cut-off level for dividing patients into high and low XIST expression groups varied among the different studies. Finally, available data were not deemed sufficient to validate the relationship between XIST and clinicopathological parameters, which requires further research.

In summary, our data illustrates that XIST is a novel prognostic biomarker for patients with cancer. However, further large-scale studies on specific cancer types are required to validate the prognostic roles of XIST in cancer.

Funding: This work was supported in part by the Natural Science Foundation of Shandong Province (No. ZR2015AL014) and the Fundamental Research Funds for the Central Universities (No. 15CX02064A).