Glioma is the most common lethal primary brain tumor, with a high recurrence rate, and high morbidity (1). Glioma usually infiltrates into normal brain tissues; therefore, it is difficult to completely eradicate it using common therapeutic strategies, like surgical resection, chemotherapy, and radiotherapy. Therefore, other novel therapy methods, such as biological targeting therapy, urgently need to be developed.

HHV-6A and HHV-6B are two variants of human herpesvirus 6 (HHV-6), which is a member of the betaherpesvirus subfamily. Specifically, among herpesviruses, the open reading frame ORF U94/rep is only found in HHV-6A and HHV-6B (2). U94 has strong homology with the adeno-associated parvovirus Rep 78/68 gene, which has an important role in virus integration, replication, and transcription (3). The amino acid identity of U94 to adeno-associated virus type 2 Rep 78/68 gene suggests that there might be some functional similarities between the U94 and Rep 78/68 proteins. U94 is not only a negative regulator of HHV-6 lytic replication, but also has an important effect on the maintenance of viral latency (4,5). Recently, it was shown that HHV-6 U94 possesses DNA-binding, exonuclease, and helicase-ATPase activities, which are required for HHV-6 chromosomal integration (6). Interestingly, several studies showed that U94, as a tumor suppressive gene, has anti-tumor activity. HHV-6 U94 inhibited transformation by the H-ras oncogenic protein and suppressed angiogenesis of blood and lymphatic endothelial cells (7,8). In addition, U94 inhibited the tumorigenesis of prostate cancer by altering fibronectin 1 (FN1) and angiopoietin like 4 (ANGPTL4) gene expression (9). Recently, Caccuri et al. observed that HHV-6 U94 downregulates Src, promotes a partial mesenchymal-to-epithelial transition, and inhibits tumor cell growth, invasion, and metastasis in breast cancer (10).

HHV-6 is characterized by an elective tropism for CD4+ T lymphocytes; however, the virus can infect several different cells, including cells of the central nervous system (CNS) (11). Previously, we reported that HHV-6 was detected in glioma tumor tissues (12). However, the roles and underlying mechanisms of U94 in glioma cells are unknown.

In the present study, we aimed to investigate the effects of U94 on the progression of glioma. The results suggested that U94 inhibits the proliferation, migration, and invasion of glioma cells. Furthermore, U94 significantly suppressed U87 cells tumorigenesis in a nude mouse model. These findings revealed that U94 has a potent tumor suppressor activity in glioma and suggested that U94 might serve as a novel target to treat glioma.

U94 lentivirus generation and cell infection

The full-length sequence of human herpesvirus 6A U94 (GenBank: MG894374.1:c134129-132657) was synthetized and purchased from GENEWIZ, Inc. (Suzhou, China). GENEWIZ, lnc. then cloned the U94 sequence into plasmid pHAGE-CMV-MCS-IZsGreen-U94 (with a His tag). HEK 293T cells (human embryonic kidney cells) were transfected with pHAGE-CMV-MCS-IZsGreen-U94 (with a His tag) and packaged into plasmids (psPAX2 and pMD2.G) using Lipofectamine 2000 (Thermo Scientific, Waltham, MA, USA) following the manufacturer’s instructions. At 48 h after transfection, lentiviruses were harvested and used to transduce U87 cells. The expression of U94 was confirmed using an anti-His antibody (Cell Signaling Technology (CST), Danvers, MA, USA) and Alexa Fluor 594 Donkey anti-rabbit IgG secondary antibody (Invitrogen) using an immunofluorescence assay as described previously (6).

The cell proliferation was determined using a Cell Counting Kit 8 (CCK-8, Dojindo, Japan). Briefly, U94-expressing U87 cells were seeded in 96-well plates (2,000 cells per well). After 24, 48 and 72 h, the CCK-8 reagent (10 µL/well) was added into the 96-well plates and incubated for 2 h and the absorbance was measured at 450 nm according to the manufacturer’s instructions.

The cells were seeded in 35 mm dishes (800 cells/dish) and cultured for 15 days. Colonies were fixed with pre-cooled methanol for 10 min. After washing three times with phosphate-buffered saline (PBS), the colonies were stained with 0.1% crystal violet (Sigma-Aldrich, St. Louis, MO, USA) for 90 sec. For the soft agar colony formation assay, cells were suspended in 0.3% low-temperature melting agar (Sigma-Aldrich) and plated on top of 1.0% solidified agar in 60 mm dishes (5,000 cells/dish). Fifteen days later, the clones were stained with trypan blue (Sigma-Aldrich). Colonies that were ≥1 mm in diameter were counted under a microscope.

The cells were plated in 6-well plates (104 cells per well). After 24 h, wounds were made in the confluent cell layer by scraping with a 200 µL pipette tip. After washing with PBS three times, the cells were incubated for 12 h. The wound-healing process was monitored under an inverted light microscope (Zeiss, Germany).

The Transwell migration assay was performed as previously reported, with some modifications (13). Briefly, 5,000 cells were suspended in 100 µL of DMEM medium without FBS and seeded into the upper chamber of the 24-well plate (Millipore, Billerica, MA, USA). Then, 600 µL of DMEM containing 10% FBS was added to the lower chamber. After incubation for 6 h, the filters were washed with PBS, fixed with pre-cooled methanol for 10 min, and stained with 0.1% crystal violet for 30 min. A set of images was acquired using NIS Elements image analysis software (Nikon, Tokyo, Japan).

Cell invasion assays were carried out as previously described, with slight modifications (13). The Transwell membrane was covered with 60 µL of Matrigel (100 µg/mL, Corning Inc., Corning, NY, USA) for 2 h at 37 ℃. Then, 2.5×104 cells in 100 µL of DMEM without FBS were seeded into the upper chamber of the 24-well plate. Then, 600 µL of DMEM containing 10% FBS was added to the lower chamber. After incubation at 37 ℃ for 24 h, the invaded cells were fixed with pre-cooled methanol, stained for 30 min with 0.1% crystal violet, and counted under a microscope.

All data were normalized to the expression of GAPDH. The relative expression was calculated using the equation, relative quantification (RQ) =2−ΔΔCt (Ct, cycle threshold).

U94-expressing and control U87 cells were inoculated (5×106 cells/spot) into the axilla of athymic nude mice (4 weeks old, female). Mice were weighed, and the tumor width (W) and length (L) were measured using calipers every 6 days. The tumor volume was estimated according to the standard formula: V = 1/2 × L × W2 (15). Twenty-four days after inoculation, the animals were sacrificed and the tumors were extracted. All experimental procedures were performed according to the guidelines of the Institutional Animal Care and Use Committee of Nanjing Medical University under ethical approval number #1701005-1 from Nanjing Medical University.

The data are presented as mean ± SEM. Statistical significance was determined by Student’s t-test. P<0.05 was considered statistically significant.

U94 inhibits U87 glioma cell proliferation

U87 cells were transfected with lentiviruses carrying the U94 gene, and the expression of ectopic U94 was confirmed by immunofluorescence. The results showed that ectopic U94 was mainly expressed in nucleus at 24 hours and in cytoplasm at 48 hours, but was expressed in both the nucleus and cytoplasm at 72 hours (Figure 1A). We next determined whether U94 affected the growth of U87 cells. As shown in Figure 1B, elevated U94 expression efficiently inhibited the proliferation of U87 cells at 72 h, as assessed using the CCK-8 assay. Furthermore, the colony formation ability of U94-expressing U87 cells was assessed by colony formation and soft agar colony formation assays. As shown in Figure 1C,D, the numbers and sizes of cell colonies were markedly reduced in U94-expressing U87 cells compared with those of the control cells. These results clearly demonstrated that U94 could inhibit tumor cell growth and colony formation. 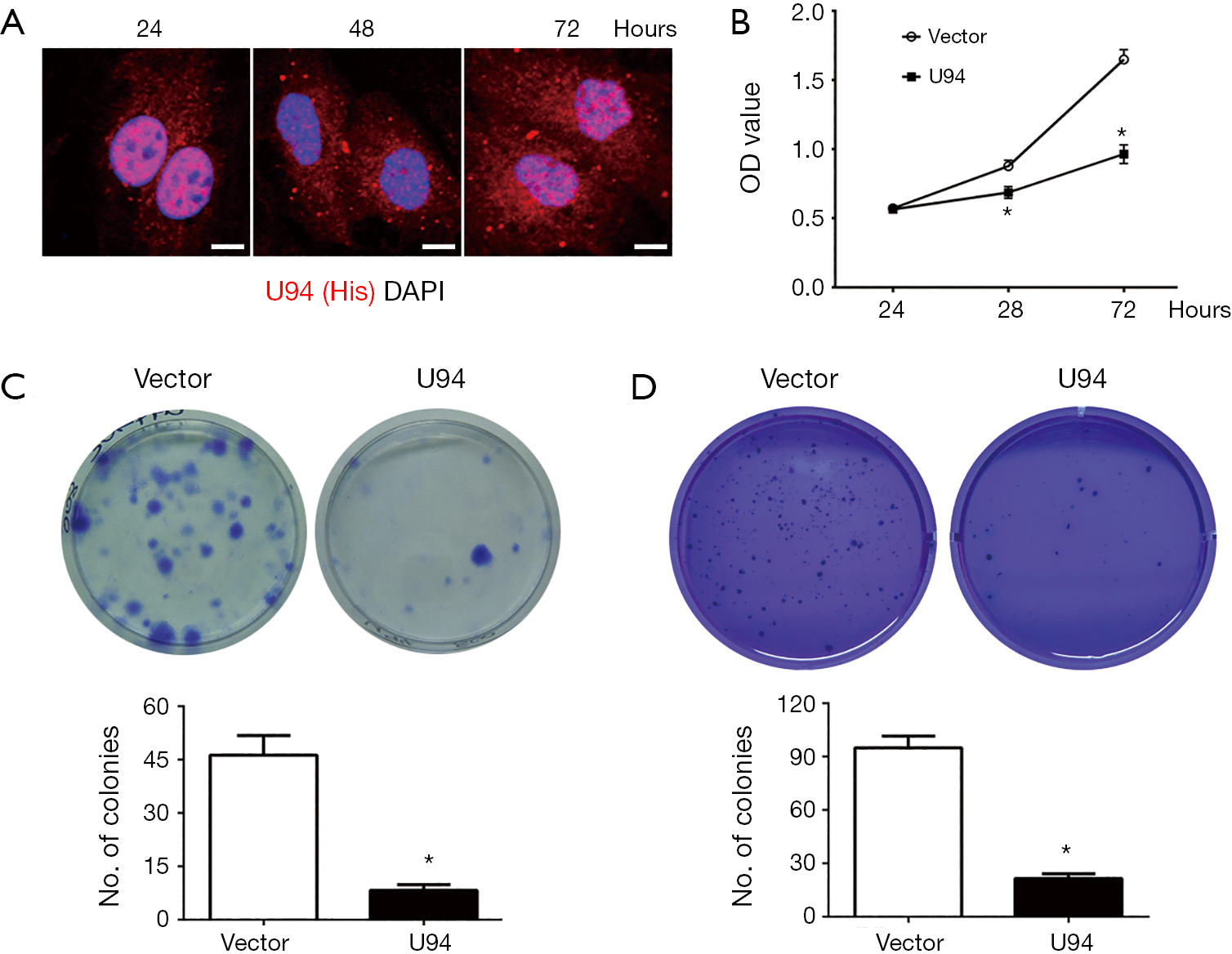 U94 inhibits U87 glioma cell migration and invasion

Next, we next explored whether U94 could influence the migration and invasion of tumor cells. Figure 2A shows that U94-expressing U87 cells could inhibit cell migration compared with the control U87 cells using a wound-healing assay. In accordance with the above results, a Transwell migration assay showed that the expression of U94 in U87 cells inhibited cell migration (Figure 2B). In addition, cell invasion ability was evaluated using the Matrigel-based Transwell invasion assay. The results showed that U94 also inhibited the invasion of U87 cells compared with that of the control cells (Figure 2C). These data collectively indicated that ectopic expression of U94 in glioma cells could significantly inhibit cell migration and invasion in vitro. 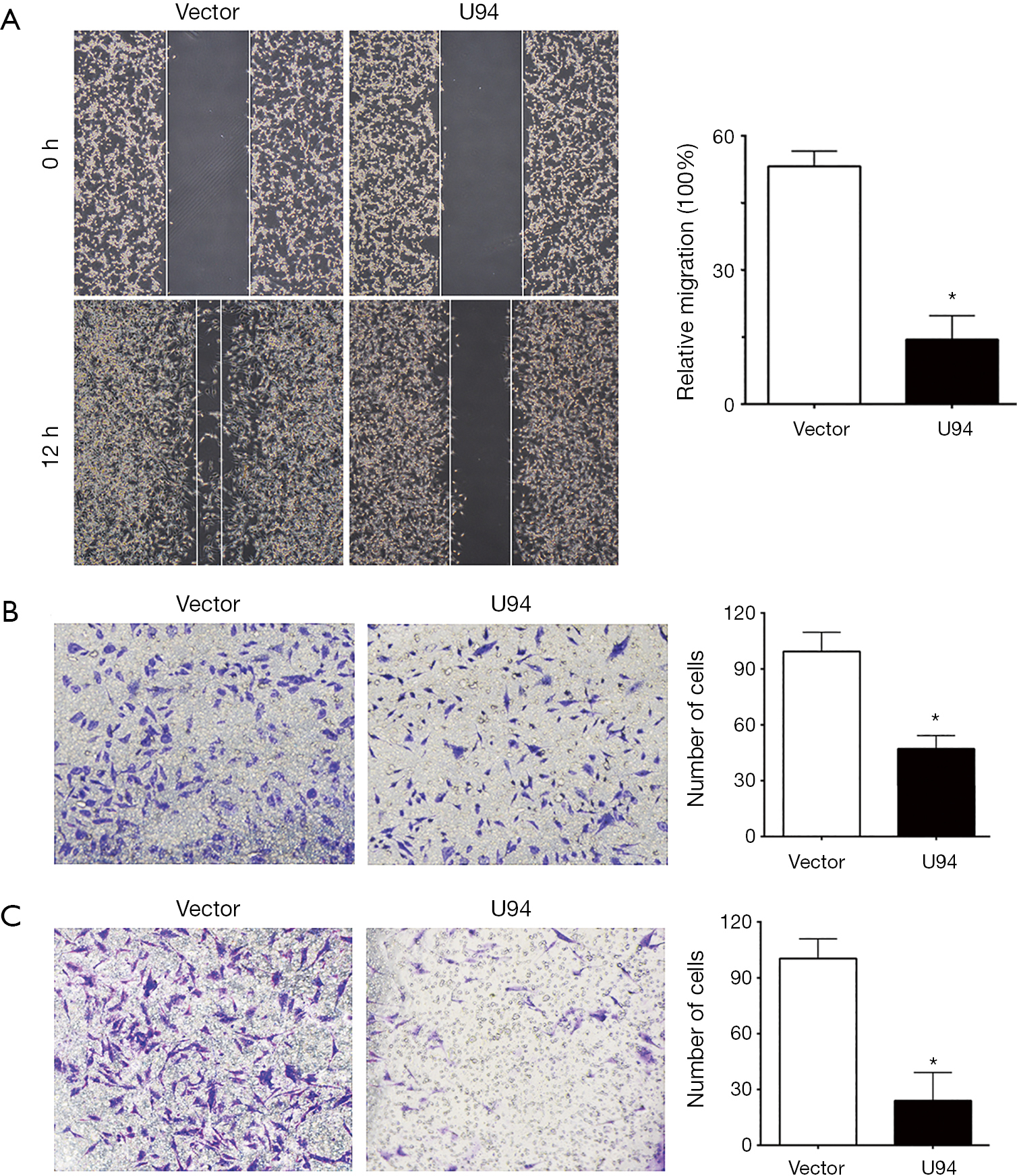 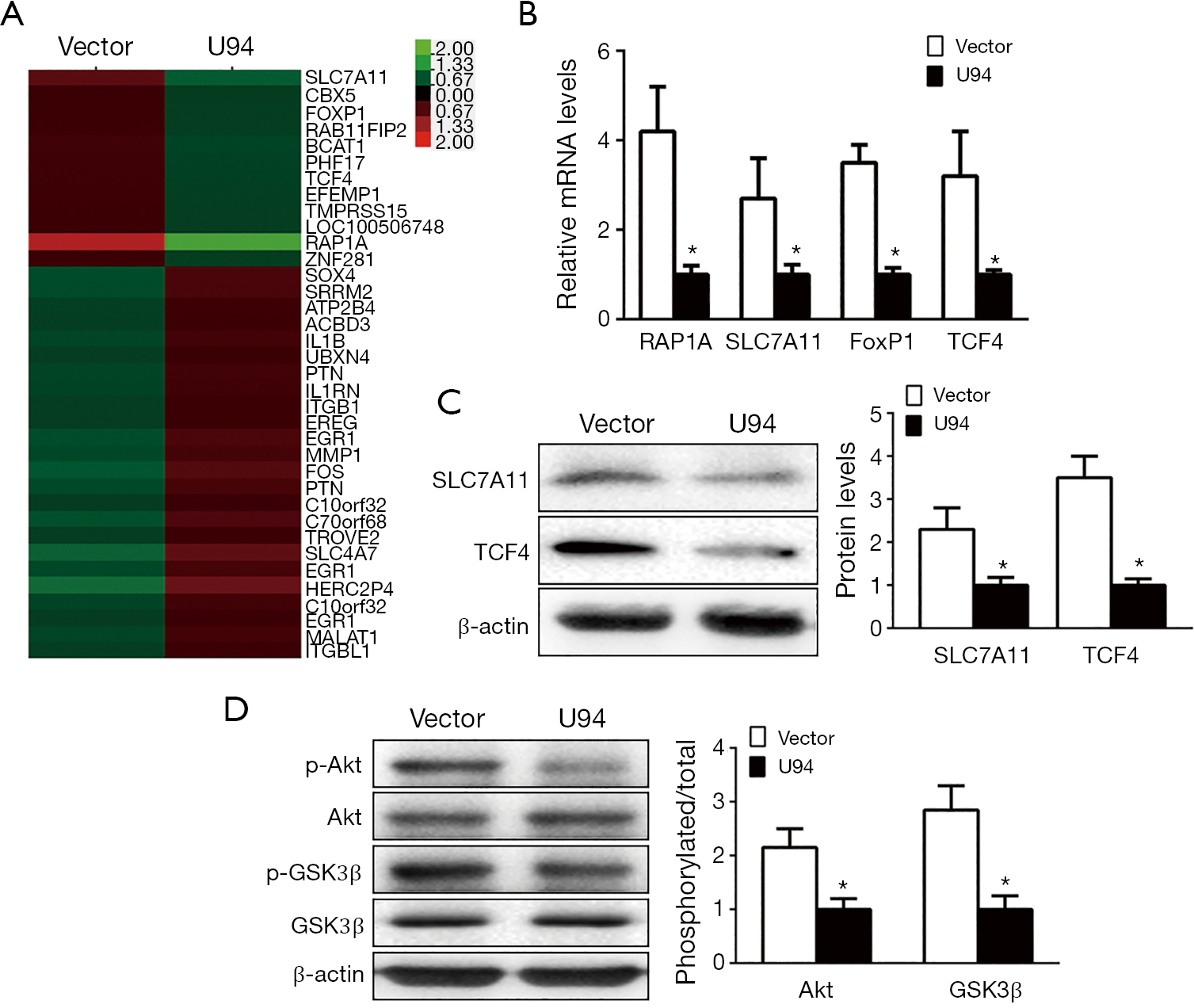 Ectopic expression of U94 inhibits U87 cell tumorigenesis in nude mice

We then constructed tumor xenograft models to determine whether U94 could inhibit tumor growth and tumorigenesis in vivo. U94-expressing U87 cells were subcutaneously injected into both sides of the chest of nude mice. Tumor growth was examined every 6 days. As shown in Figure 4A,B,C, the tumors increased progressively over time in the control mice. However, the growth of the tumors formed from the U94-expressing U87 cells was dramatically inhibited. The average weights of the mice showed no obvious differences between the two groups (Figure 4D). However, the average tumor weights of the U94-expressing U87 cells injection group were much lower than those of the control group (Figure 4E). 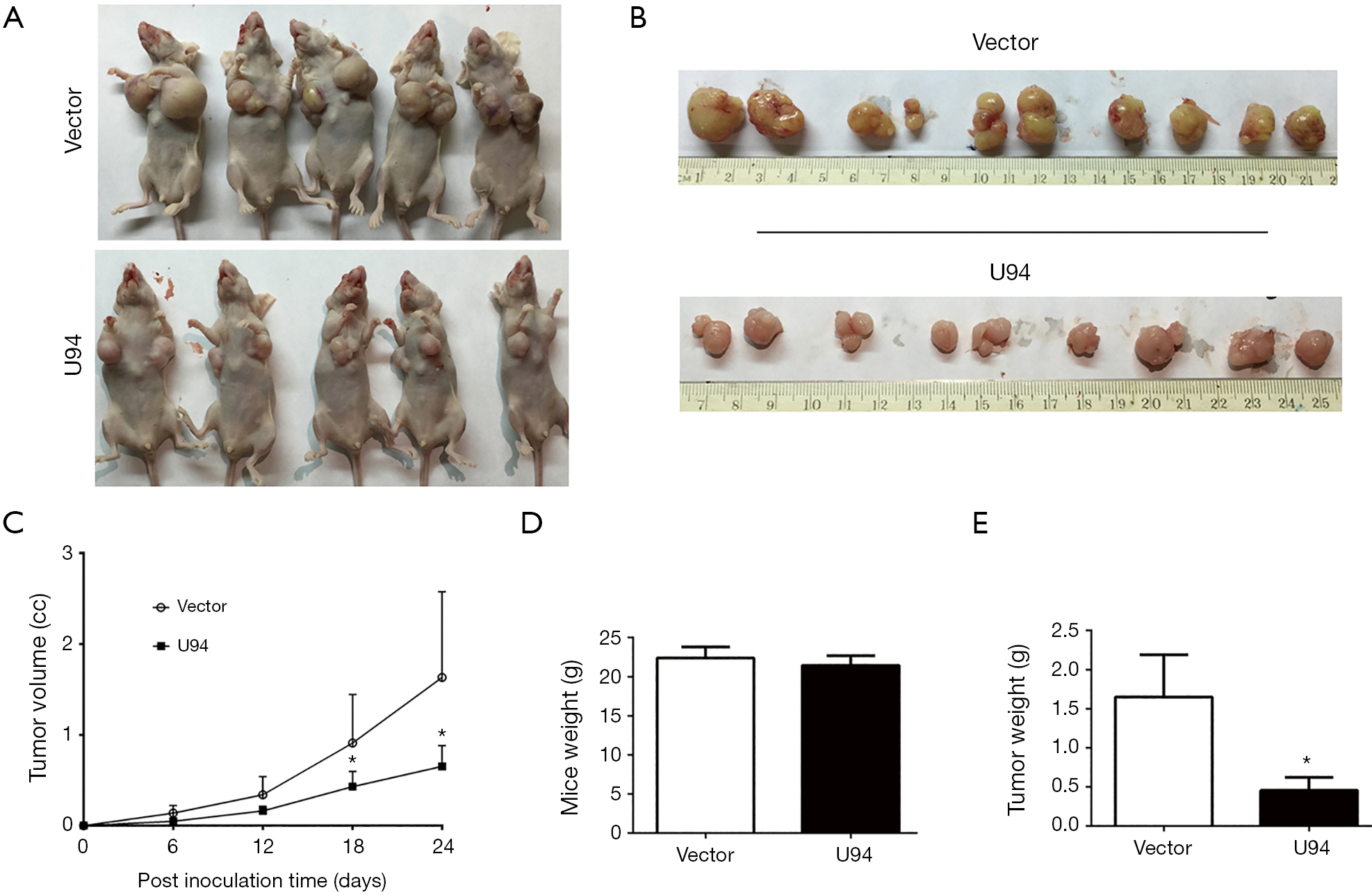 HHV-6 is a ubiquitous human herpesvirus, which latently infects almost all the adult population. The impact of HHV-6 latent infection on host physiological functions is poorly understood. Similar to symbiotic bacteria, the co-evolution of human viruses suggests that at least herpesvirus could symbiose with human hosts. Herpesvirus latency also brings a benefit to the host. Murine gamma herpesvirus 68 infection protects lupus-prone mice from developing autoimmunity (20,21). In the present study, we focused on HHV-6A U94, a latency-associated gene, and analyzed its effect on the progress of glioma. We demonstrated that U94 inhibited tumor cell growth, colony formation, cell migration, and invasion in U87 glioma cells. Moreover, in vivo experiments showed that ectopic expression of U94 inhibited U87 cells tumorigenesis in nude mice. However, the exact benefit of HHV-6A U94 to the human host requires further investigation.

To further explore the molecular mechanism by which U94 inhibits tumorigenesis in glioma, mRNA microarray and validation experiments were performed. Several target genes were identified, including RAP1A, SLC7A11, FOXP1, and TCF4, which are closely related to the occurrence of malignant tumors (16-19). RAP1A, a member of the Ras family, could activate cascade signaling, such as in cell proliferation, differentiation, and apoptosis (22). FOXP1, a member of the Fox family of transcriptional repressors, is elevated in primary human hepatocarcinoma cells, colon cancer, and diffuse large B-cell lymphoma (23,24). SLC7A11 is expressed throughout the brain and facilitates the entry of cysteine into cells in exchange for glutamate (25,26). SLC7A11 expression is elevated in ~50% of human tumors and increased SLC7A11 expression predicted poor survival in patients with malignant glioma (27). TCF4 belongs to the high mobility group DNA binding protein family and is particularly highly expressed in the brain (28). TCF4 activates Wnt signaling, which engages in cross talk with AKT/GSK3β signaling. In the present study, we found that U94 decreased the mRNA levels of RAP1A, SLC7A11, FOXP1, and TCF4 in U87 glioma cells. Additionally, the protein levels of SLC7A11 and TCF4 were also reduced in U94-expressing U87 glioma cells. These findings suggested that AKT/GSK3β signaling might be involved in the anti-tumor effects of U94 on U87 glioma cells. Consistent with the suggested involvement of AKT/GSK3β signaling, the western blotting results showed that U94 could inhibit the phosphorylation of AKT and GSK3β in U87 glioma cells. Although previous research has shown that U94 is a nuclear targeting protein in lymphocytes (5), we found that ectopic U94 was expressed in both the nucleus and cytoplasm in U87 glioma cells. Therefore, we speculated that U94 might be secreted outside the cells and could be taken up by adjacent cells. However, the more detailed mechanism of the anti-tumor activity of U94 in glioma requires further investigation in a future study.

The present study revealed a novel function of HHV-6 U94 in the inhibition of glioma. There are limited effective therapeutic methods to treat glioma; therefore, our results may provide an insight to develop new therapeutic approaches to treat glioma.

Ethical Statement: All procedures were approved by the Institutional Animal Care and Use Committee of Nanjing Medical University (Nanjing, China).