Patients with rectal cancers are known to have an increased rate of local recurrence and decreased survival time compared to patients with tumors of the upper colon. This is due primarily to the surgical constraints imposed by the location of the rectum within the pelvis.

Preoperative chemoradiotherapy (CRT) has been established as a treatment of choice for locally advanced rectal cancer after the 1990s. Compared with postoperative CRT, the preoperative approach was superior in terms of overall compliance rate, reduced toxicity, superior rate of local control, and sphincter preservation (1). Moreover, favored long-term outcomes have been reported in patients with good CRT responses and in particular, pathological complete response (pCR) is known to be associated with excellent prognostic outcome (2,3). Because of these advantages, preoperative CRT has become the preferred treatment for patients with stage II or III rectal cancer.

However, preoperative CRT is not equally beneficial for all patients with rectal cancer. Some patients display minimal response to CRT, whereas others show pCR. Patients expected to be poor responders should undergo alternative treatments early in the course of disease, thus also avoiding frequent CRT-related side effects such as enteritis, anorexia, thromboembolic events, and radiation dermatitis (4). On the other hand, prompt and clear-cut recognition of pCR patients could spare them unneeded surgical intervention, along with related functional consequences. Thus, prediction of response to CRT is very important for choosing the proper treatment option and avoiding unnecessary adverse effects and raising of costs.

Clinicopathological and radiological features have limited ability to predict response to preoperative CRT because of lack of sensitivity and specificity (5-7). Therefore, a wide variety of genetic and molecular biomarkers with the potential to predict the response have been investigated. For example, p53, epidermal growth factor receptor, vascular endothelial growth factor, thymidylate synthase, Ki-67, p21, Bcl-2, and Bax have all been reported to be associated with therapeutic response to preoperative CRT (8-10). However, the results have been controversial and inconclusive, and no specific molecular marker has yet been definitively proven to be predictive of response to CRT, so none have currently reached the clinic (5,6).

Cancer stem cells (CSCs) represent a small population of cancer cells, sharing common properties with normal stem cells such as the ability of self-renewal and multi-directional differentiation. Because of these properties, after undergoing radio or chemotherapy, the residual CSCs can rapidly proliferate to re-establish the tumor. In addition, CSCs can survive during anti-cancer treatment though various drug resistance mechanisms including the up-regulation of drug efflux transporters, represented by ATP-binding cassette (ABC) transporters (11-13). Therefore, one can assume that the expression of CSC markers or ABC transporters might be associated with resistance to anti-cancer treatment including chemotherapy or CRT.

In this study, we performed a pilot investigation to examine the relationship between the expression of ABC transporters and CSC markers in pretreatment biopsy samples and pathological response to CRT by postoperative histological examination of rectal cancer patients who received preoperative CRT.

A total of 76 patients with locally advanced rectal carcinoma were treated with preoperative CRT and surgical resection at the Department of Surgery, Seoul National University Bundang Hospital between May 2006 and December 2014. Histopathologic and clinical data were obtained from the medical records and pathologic reports of the patients. All patients were treated with preoperative CRT. The total dose of radiation in most cases was 45 Gy within 6 weeks, usually 1.5 Gy per treatment, five times per week. The total dose range was 40–50 Gy. Capecitabine- or 5-fluorouracil (5-FU)-based chemotherapeutic regimens were used in the patients with radiation therapy: capecitabine in 50 patients, 5-FU and leucovorin in 25 patients, and 5-FU alone in one patient. Pathologic stage was determined according to the grading system of the 8th edition of the American Joint Committee on Cancer. Informed consent from the patients and approval of the local ethics committee were obtained.

Classification of response to preoperative CRT

Tumor response to preoperative CRT was evaluated pathologically in postoperative specimens according to the Dworak regression grading system. According to these standards, the therapeutic effect was categorized into five grades: tumor regression grade (TRG) 0, no regression; TRG 1, dominant tumor mass with obvious fibrosis and/or vasculopathy; TRG 2, dominant fibrotic changes with few tumor cells or groups (easy to find); TRG 3, very few (difficult to find microscopically) tumor cells in fibrotic tissue with or without mucous substance; TRG 4, no tumor cells, only fibrotic mass (total regression). TRG 0, TRG 1 and TRG 2 were combined to form the chemoradio-resistant group (58/76; 76.3%) in comparison with the chemoradio-sensitive group (TRG 3 and TRG 4; 18/76; 23.7%). Representative photographs for each tumor regression grade are presented in Figure 1.

Statistical analysis was performed using the SPSS version 21.0 software package (SPSS, Chicago, IL, USA). The correlations between the status of protein expression and the clinicopathological features including tumor regression grade were analyzed using Pearson’s χ2 test and the Fisher’s exact probability test. Multivariate logistic regression analysis was performed to determine independent parameters associated with the response to CRT with the backward stepwise selection procedures. For the data on analysis of survival, the differences between survival rates were determined using the log-rank test. All statistics were 2-sided and a value of P<0.05 was considered statistically significant.

There were 29 (38.2%) females and 47 (61.8%) males involved in the study. The mean age was 60.4 years (range of 31–86 years). Abdominoperineal resection was performed in 15 (19.7%) patients and anal sphincter-preserving operation was performed in 59 (77.6%) patients. Transanal local excision was performed in 2 (2.6%) patients. Image studies using computed tomography or magnetic resonance imaging classified 4 cases as clinical T stage 2, 67 cases as stage 3, and 5 cases as stage 4. Sixty-seven cases were expected to have lymph node metastasis, and distant metastasis was revealed in 5 cases by image equipment. After CRT and surgical treatment, 58 (76.3%) cases were classified as chemoradio-resistant group and 18 (23.7%) cases as chemoradio-sensitive group. pCR was found in 8 (10.5%) cases. Lymph node metastasis was assessed in 74 cases and observed in 28 (37.8%) cases. Vascular, lymphatic and perineural invasion were found in 10.5%, 14.5%, and 21.1% of the cases, respectively. Fifteen patients (19.7%) showed local recurrence or disease progression after treatment. Table 1 shows the clinical and pathologic characteristics of the 76 rectal cancer cases. 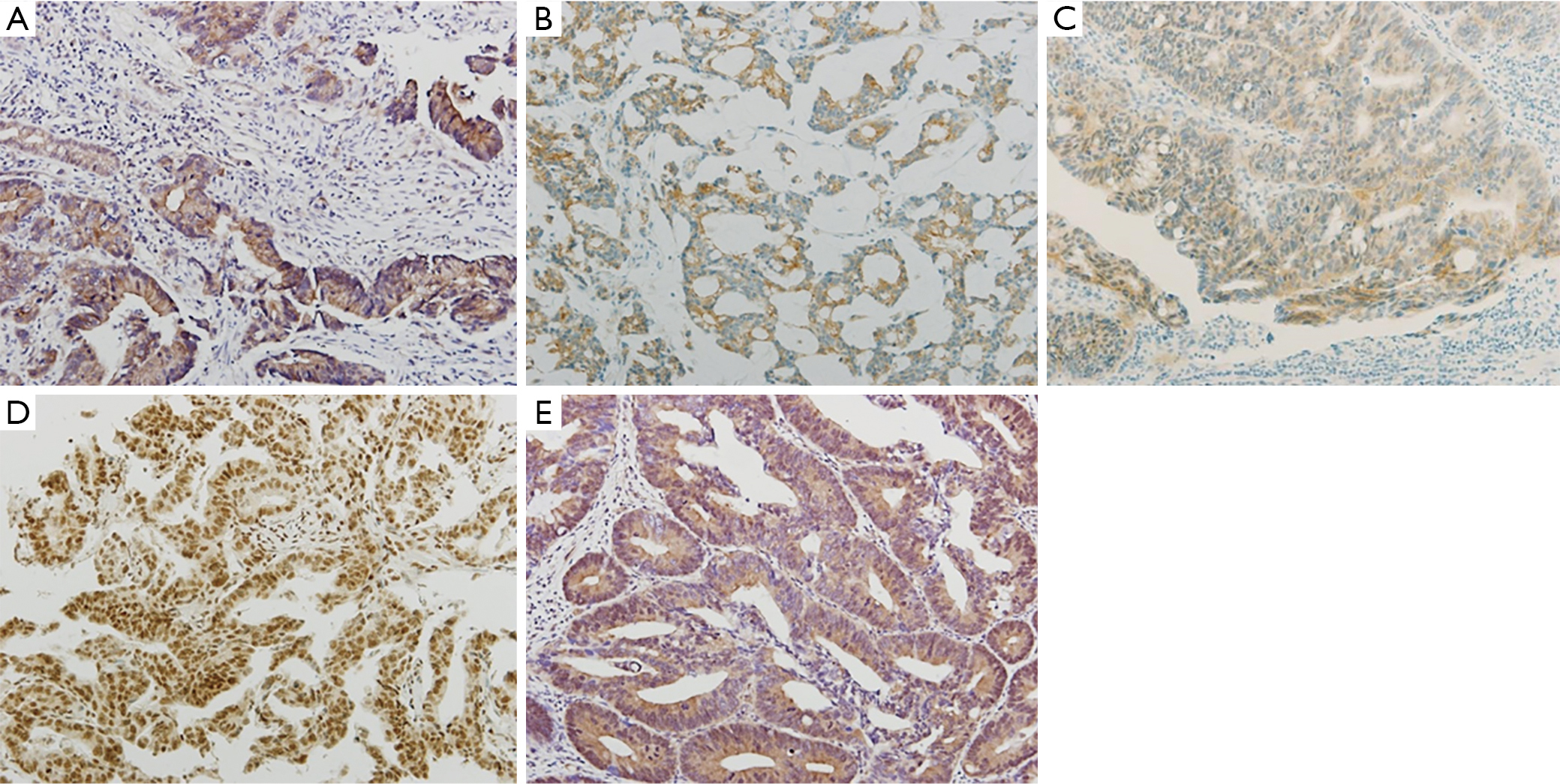 The expression of ABCG2 was frequently observed in chemoradio-sensitive group (P=0.042), while the ABCC2 was frequently expressed in chemoradio-resistant group (P=0.014). Other clinical parameters including age, gender, tumor location, and clinical TNM stage showed no significant association (Table 2). Multivariate analysis using protein expression and pretreatment clinical parameters such as sex, age, tumor location, and clinical TNM stage, indicated that the expression of the two proteins was independently associated with response to chemoradiotherapy (P=0.029 and 0.008, respectively) (Table S1).

Among the 56 cases with positivity for ABCC2, only 2 cases (3.6%) showed pCR, whereas 6 out of 20 cases (30%) without ABCC2 expression showed pCR. This difference was statistically significant (P=0.003). The expression of other proteins showed no correlation with pCR. Among clinical parameters, lower clinical T stage was associated with higher rates of pCR (Table 3). Multivariate analysis was performed using protein expression and pretreatment parameters including sex, age, tumor location, and clinical TNM stage, and only ABCC2 expression showed statistically significant association with complete tumor regression (P=0.008) (Table S2).

Perineural invasion and presence of metastasis in more than one lymph node had a significant association with shorter disease free survival (P=0.001 and 0.011, respectively). Cases with chemoradio-resistance or expression of ABCC2 showed tendency for shorter disease free survival than cases with chemoradio-sensitivity, however statistical significance was not found (P=0.130 and 0.246, respectively).

In the present study, we explored the suitability of ABC transporters and CSC markers as predictive biomarkers of response to neoadjuvant CRT in patients with rectal cancer. We found an association of both ABCC2 and ABCG2 with tumor response to CRT. Specifically, ABCC2 expression was higher in CRT-resistant tumors, whereas ABCG2 was more highly expressed in CRT-sensitive tumors.

Cell-based evidence for a role of ABC transporters in cancer resistance to CRT has been previously reported (14-16). Moreover, such a relationship has been found in breast cancer and esophageal adenocarcinoma (14,17-21). Furthermore, in colorectal cancer, clinically relevant transcriptional variations have been reported for various ABC transporters (22). In rectal cancer, association between resistance to CRT and ABCC3 was revealed by using patients’ samples and in vitro experiment (23). Immunohistochemical expression of ABCC4 was found associated with resistance of rectal cancer to CRT and single nucleotide polymorphism of ABCC4 also showed association with response to CRT in rectal cancer (24,25).

We found that ABCC2 is highly expressed in the CRT-resistant group, while CRT responders displayed relatively low ABCC2 expression. ABCC2 is known to confer resistance to a number of different anti-cancer drugs (15). ABCC2 positivity has been associated with chemoresistance of esophageal cancer (20) and with resistance to CRT in head and neck squamous cell carcinoma (26). Moreover, an in vitro study showed that ABCC2 is involved in drug resistance of colorectal cancer cell lines (27). On the other hand, a study addressing possible ABCC2-related drug resistance mechanisms in 5-FU-treated patients with colorectal cancer led to inconclusive results (28). Notably, a specific association between ABCC2 expression and the response to CRT of rectal cancer has not yet been investigated and, to our knowledge, our study is the first to report such a relationship. Our findings support the suitability of ABCC2 as a biomarker for the early identification of patients with poor response to neoadjuvant CRT, and who will most likely benefit from alternative treatments.

The expression of ABCG2 was previously shown to be associated with the response to 5-FU-based chemotherapy in breast cancer and metastatic colorectal cancer (19,29). We also found a relationship between ABCG2 expression and the response of rectal tumors to CRT. Notably, CRT-sensitive rectal tumors displayed a higher ABCG2 expression, compared to the CRT-resistant tumors. A similar correlation has been previously observed with another ABC transporter, ABCC1, the expression of which was found to be higher in responders to neoadjuvant chemotherapy, in esophageal adenocarcinoma (21). These results may reflect differences related to the specific type of anti-cancer treatment employed and kind of tumor.

The expression of two other proteins, the CSC markers SOX2 and LGR5, was also investigated in relation to CRT response in rectal cancer. SOX2 is known as a transcription factor essential for the maintenance of pluripotent stem cells (30) and LGR5, a cell-surface molecule involved in signaling, is considered a global marker of adult stem cells (31). A role of these two proteins in the response of large bowel cancer to chemotherapy has been previously reported. Transcription of SOX2 in residual rectal cancer cells after CRT was found to be significantly associated with poor survival (32), and metastatic colorectal cancer patients with low LGR5 levels showed better response to 5-FU-based treatment (33). However, in our rectal cancer patients, SOX2 and LGR5 expression was not associated with response to neoadjuvant CRT.

We believe that our study provides important information about the role of ABC transporters as biomarkers of CRT response in rectal cancer. However, one major limitation of our study is the relative small number of enrolled cases. Additional studies with larger numbers of will be necessary to ascertain the applicability of these markers in clinical routine for the prediction of rectal tumor response to CRT.

Funding: This work is supported by the Seoul National University Bundang Hospital research fund grant (No. 14-2015-009).

Ethical Statement: The study was reviewed and approved by the Ethics Committees of the Seoul National University Bundang Hospital (B1512-326/302).