Generally, metastasis is tightly associated with poor survival outcomes in patients with cancer (1). Thus, there is an urgent need to understand the mechanisms involved in cancer metastasis so as to identify new molecular targets.

Voltage-sensitive ion channels facilitate diffusion of ions down the electrochemical gradient across cell membranes in excitable cells and tissues, which have been implicated in a variety of oncogenic processes, from proliferation to metastatic cascade, and have been proposed as promising early functional biomarkers and prognostic factors in tumors (2). Among these ion channels, voltage-gated sodium channels (VGSCs) were associated with metastasis and poor prognosis in a variety of cancers, such as malignancies of prostate, breast, lung, and colon (3-5). VGSCs are composed of ten pore-forming α subunits (VGSCα) and several modulating β subunits (VGSCβs). Both VGSCαs (Nav1.1 to Nav1.9, and Nax) and VGSCβs (β1 to β4) play a critical role in regulating electrical excitability and tumor metastasis (6). Nav1.5 is one of the VGSCαs that is predominantly expressed in heart, being sensitive to micromolar concentrations of the tetrodotoxin (TTX); Nav1.5 dysfunction could lead to some cardiac arrhythmias’ diseases (7). Emerging evidence suggests that Nav1.5 is also widely expressed in non-excitable cells, including immune cells and cancer cells, and the up-regulation of Nav1.5 expression and activity contribute to tumor metastasis (3). In a previous study, we found the mRNA expression of Nav1.5 were significantly increased in highly metastatic ovarian cancer cell lines compared with those of low-metastatic cells, and increased Nav1.5 expression was associated with high histological grade and metastasis in ovarian cancer (8). These findings indicated metastasis-promoting effects of Nav1.5 in cancer.

Indeed, blockers of VGSCs are very effective in suppressing cancer cell invasion and migration (5). Local anesthetics, such as lidocaine and ropivacaine, have been indicated to be potent inhibitors of VGSCs activity and cancer cell invasion (9). Natural VGSCs blocking agents, such as TTX that blocks single sodium channels in an all-or-none manner on binding, are unequivocally toxic to mammals. TTX treatment could suppress migration and invasion of ovarian cancer cells in vitro (10). However, neither lidocaine nor TTX is isoform-specific, i.e., they inhibit VGSC isoforms unselectively.

The third extracellular region (E3) of VGSCα is diverse between different isoforms. An antibody recognizing E3 of Nav1.7 has been used as a specific inhibitor in human to inhibit the invasive capacities of non-small-cell lung cancer cells (11). In the present study, we used a Nav1.5-third extracellular region antibody (E3Ab) to specifically bind to and inhibit Nav1.5. E3Ab is a peptide specific polyclonal antibody recognizing E3 of Nav1.5, which could inhibit approximately 60% of Na+ current in HEK-293 and Chinese hamster ovary epithelia cells upon an extra-cellular application, without effecting Nav1.4 and Nav1.6 isoforms (12). The aim of this study was to investigate the inhibitory effect of E3Ab on cancer cells in vitro and in vivo.

Cells were cultured on glass cover-slips for 24 h and then fixed with 4% paraformaldehyde at room temperature for 10 min. Non-specific sites were saturated by incubating with 3% normal goat serum in PBS for 30 min. Nav1.5 was detected by incubating the cells with E3Ab (15 µg/mL) and Nav1.5 antibody (8 µg/mL, Alomone Labs) for 60 min. Cells were then washed and incubated with a goat anti-rabbit secondary antibody conjugated to fluorescein isothiocyanate (FITC; Pierce, USA) for 60 min. Cell nuclei were visualized by DAPI staining (Beyotime Biotechnology, Shanghai, China). The results of immunocytochemistry were evaluated under a fluorescence microscope (Olympus IX71, Japan).

The animal experiments were approved by the University Committee on Use and Care of Animals (UCUCA) at the hospital and conformed to their relevant regulatory standards. Female BALB/c mice (Silaikejinda, Hunan, China) of 4–6-week-old weighted 17–18 g was used for examining the effect of E3Ab on growth of ovarian cancer. The mice were raised under SPF (specific pathogen-free) conditions and were acclimatized for one week before inoculation. To establish tumor xenografts, Caov-3 cells were re-suspended in PBS at 2×106 cells per 100 µL and then subcutaneously injected into the right flank of the mice. One week after inoculation with confirmation of xenograft formation (i.e., tumor size approached 0.1 cm3), mice were randomly divided into three groups (ten mice per group) and received intratumoral injection of E3Ab (15 µg/mL, 200 µL, weekly) (12), lidocaine (200 µg/mL, 200 µL, weekly), and PBS (200 µL, weekly) for four weeks, respectively. Body weight and tumor volume were recorded weekly (13). Tumor volume was estimated using the formula (π/6) (L × W2), where L is the length of the tumor and W is the width. One week after the last drug administration, the mice were sacrificed and their xenografts were removed, paraffin embedded and sliced. Sections were stained with haematoxylin and eosin (HE) and the histological features of tumors were determined.

Blockade of Nav1.5 in vitro

Cells were treated with 15 µg/mL E3Ab for 48 h in order to achieve an effective inhibition of Nav1.5 activity (12). Cells treated with lidocaine (200 µg/mL; Huayuan Medicines, Fuyang, China) for 48 h served as positive control and untreated cells as negative control.

The 8 µm pore membrane of the culture inserts for 24-well plates (Corning Costar, Cambridge, MA, USA) were pre-coated with Matrigel (BD, USA). Cells were re-suspended in serum-free medium, seeded on the upper chambers at a density of 4×104 cells/well, and treated with E3Ab and lidocaine for 48 h. The lower chambers were filled with medium containing 10% FBS as chemo-attractant. After incubation for 24 h at 37 °C, the invasive cells on the lower surface of the filter membrane were fixed with 70% ethanol, stained with HE, and counted in 10 randomly selected high-power fields (×400). The procedure for migration assays was the same as the invasive assays except the inserts were not pre-coated with Matrigel as an extra-cellular mimicking matrix. Data were obtained from three separate experiments and each assay was performed in triplicate.

Cell proliferation was assessed by EdU assay. Cells were treated with a Cell-Light EdU kit (Ribobio, Guangzhou, China) in triplicate according to the manufacturer’s instructions. The results of EdU incorporation were evaluated under a fluorescence microscopy (Olympus IX71, Japan) and cells were counted in five randomly selected high-power fields (×400). The percentage of EdU-positive cells was used as the parameter reflecting cell proliferation.

To verify the expression and subcellular location of Nav1.5 in Caov-3 cells, immunocytochemistry assays have been performed. E3Ab and Nav1.5 antibody was used in parallel. Nav1.5 protein was detected predominantly in plasma membrane of Caov-3 cells by both antibodies (Figure 1), confirming the high Nav1.5 expression in Caov-3 cells and the specific binding of E3Ab to Nav1.5 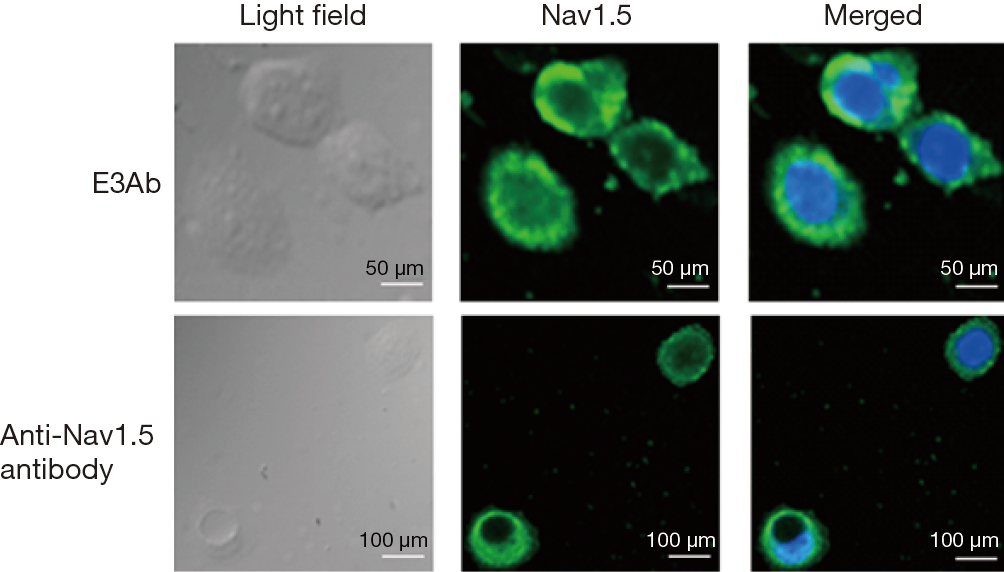 Mouse xenograft models of ovarian cancer were established to evaluate the effect of E3Ab on tumor growth in vivo. The Caov-3 xenografts were treated with PBS, E3Ab, or lidocaine. All mice survived the xenografting and the subsequent drug treatment. Both E3Ab and lidocaine could significantly inhibit the growth of xenografts compared with the control group four weeks after inoculation (Figure 2A). That was further verified by the measurement of autopsy tumor volumes after animals being sacrificed (Figure 2B). The tumor volumes in the E3Ab group and the lidocaine group were decreased to 28.59% and 25.97%, respectively, compared with that in the PBS group (Figure 2A; P<0.05). In addition, xenograft tumors in the control group exhibited higher mitotic activity (6.0±2.4 mitoses per high-power filed) than those treated with E3Ab or lidocaine (3.2±1.2 and 3.0±1.5 mitoses per high-power field, respectively; Figure 2C). The body weight of the mice at the time of sacrifice was not significantly different between groups (PBS group, 22.59±0.88 g; E3Ab group, 21.93±0.84 g; lidocaine group, 22.23±1.37 g; P>0.05). 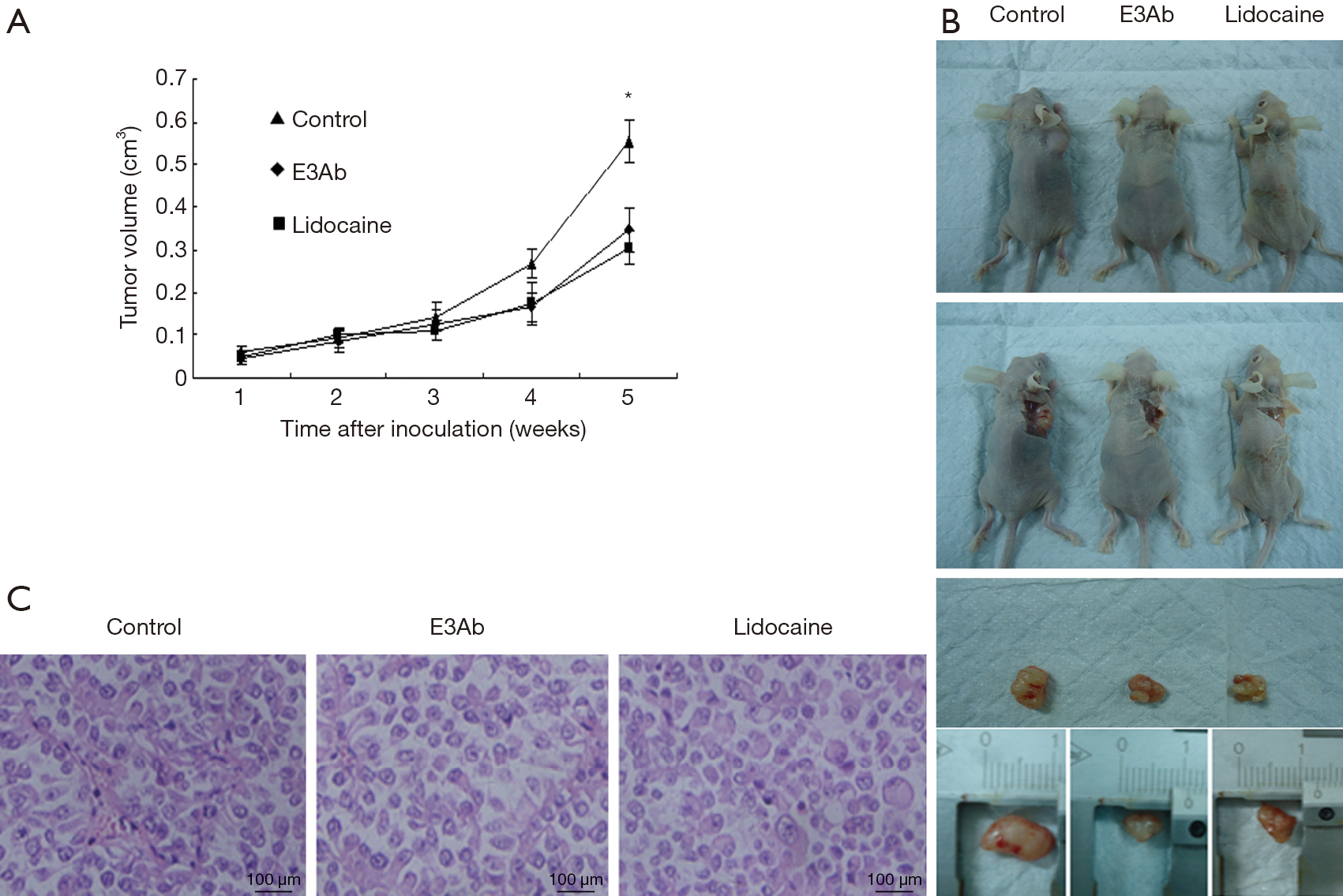 Figure 2 E3Ab inhibits ovarian cancer growth in vivo. Caov-3 subcutaneous xenografts mouse models were established and E3Ab, lidocaine, or PBS were intratumoral administrated one week after inoculation (ten mice per group). (A) Tumor growth curves show E3Ab and lidocaine slowed down the growth of xenografts compared with the PBS group; (B) the xenografts in the E3Ab group and the lidocaine group were smaller than those from the PBS group; (C) HE staining of the xenografts. *, P<0.05 vs. control. E3Ab, third extracellular region antibody.

To examine the effect of E3Ab on the malignant biological behavior of ovarian cancer, transwell assays and EdU assays were performed to analyze the alterations in cell migration, invasion, and proliferation caused by administration of E3Ab. Cancer cells were treated with E3Ab or lidocaine for 48 h. Untreated cells served as negative control. The cancer cells pre-treated with E3Ab or lidocaine had a significantly attenuated invasion ability compared with the control group as demonstrated by decreased number of cells that could migrate across the Matrigel filters. The migration ability of SiHa, MDA-MB-231, and Cavo-3 cells that had been treated with E3Ab was decreased by 36.7%, 21.2%, and 49.1% compared with the negative control, respectively (Figure 3A; all P<0.05). Also, the E3Ab treatment leaded to a marked inhibition of cell invasion as compared with the negative control; the SiHa, MDA-MB-231, and Cavo-3 cells that penetrated through the Metrigel were decreased by 34.7%, 23.1%, and 48.1%, respectively (Figure 3B, all P<0.05). The migration- and invasion-suppressing effect of E3Ab in cancer cells was similar to that induced by lidocaine. Moreover, EdU assays revealed that the cell proliferation activity was reduced by 29.1%, 32.1%, and 24.4% in SiHa, MDA-MB-231, and Cavo-3 cells, respectively (Figure 3C, all P<0.05). In addition, the MMP-9 protein expression was reduced by E3Ab and lidocaine as revealed by Western blot assays (Figure 3D). 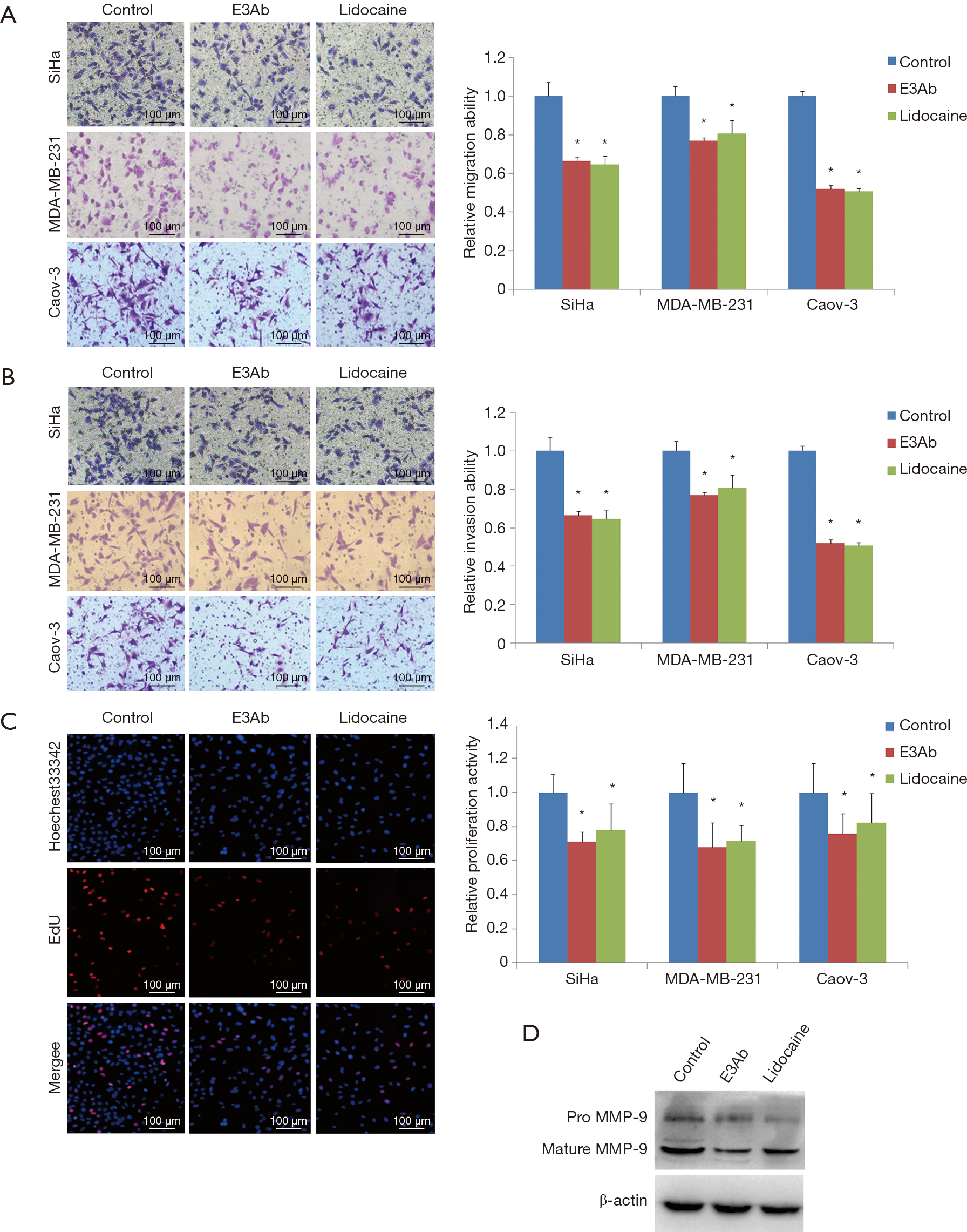 Therapeutic antibodies specifically binding to tumor surface antigens have improved the treatment for a wide range of cancers (15). In the present study, we found that E3Ab specifically bound to Nav1.5 in ovarian cancer cells and inhibited tumor growth and invasion, indicating the therapeutic potential of E3Ab in Nav1.5-positive ovarian cancer.

Increasing evidence showed that Nav1.5 was over-expressed in cancers and was implicated in tumor metastasis cascade (3-5). For example, Nav1.5 was found to be up-regulated in breast cancer tissues compared with matched non-cancer breast tissue as well as in a highly metastatic cell line MDA-MB-231 compared with a poorly metastatic cell line MCF-7 (16). In an orthotopic breast cancer model, functionally active Nav1.5 contributed to tumor growth, local invasion, and metastasis to liver, lungs and spleen (17). Similarly, Nav1.5 expression was significantly increased in human colon cancer specimens compared with normal colon tissues. Moreover, ropivacaine, lidocaine, TTX, and a siRNA specifically targeting Nav1.5 could inhibit Nav1.5 channel function and invasion of metastatic colon cancer SW620 cells, and the Nav1.5 channel activator veratridine promoted SW620 cell invasion (9,18). In astrocytomas, increased Nav1.5 expression was positively correlated with the degree of malignancy and Nav1.5 knock-down significantly suppressed tumor cell proliferation, migration and invasion (19). In our previous study, high Nav1.5 was associated with metastatic property in ovarian cancer (8). However, the function of Nav1.5 in cancer remains largely unexplored. In the present study, we found specific blockage of Nav1.5 could inhibit cancer growth and invasive capacity, suggesting a tumor-promoting role and therapeutic implication of Nav1.5 in ovarian cancer.

In the present study, we used a subcutaneous xenograft model to assess the anti-tumor effects of E3Ab and lidocaine. Subcutaneous xenograft model is the most widely used in vivo model for drug screening, because it is simple to operate, high performing, and easy to monitor. However, there are some limitations of this model when compared to an orthotopic tumor model. In an orthotopic ovarian cancer model, tumor cells are inoculated into the animal ovaries, mimicking the natural organ environment. In addition, the subcutaneous ovarian cancer xenograft models are insufficient to show spontaneous metastases and systemic side effects of treatments.

In conclusion, E3Ab can exert inhibitory effects on tumor growth and invasion through blocking Nav1.5, indicating the therapeutic potential of E3Ab for tumor. In addition, we are aiming to knock-down Nav1.5 and explore its effects in further studies, which may help clarify the mechanisms underlying the anti-tumor effects of E3Ab.

Funding: This work was supported by the National Natural Science Foundation of China (No.81572572) and the Research Funds from Science & Technology Department of Hubei Province (2014CFB996).

Ethical Statement: The protocol of animal treatment has been approved by the ethic committee of Tongji Medical College, Huazhong University of Science and Technology (S398).