Diffuse low-grade and anaplastic gliomas (grades II and III, respectively) are infiltrative primary brain tumors that are considered malignant because of their invasiveness, resistance to therapy, and likelihood of transforming to higher grades. Median survival varies from 3 to 15 years as a proportion relentlessly progress, while others may remain stable for years (1). Molecular classification plays an integral role in the diagnosis and prognostication of patients with gliomas, as evidenced by the recently revised 2016 World Health Organization (WHO) Classification of Central Nervous System Tumors (2). One genetic marker that is of critical importance is the isocitrate dehydrogenase 1 (IDH) gene, which is found to be mutated in 80–90% of all WHO grades II and III gliomas and in a minority of grade IV tumors (glioblastoma, or GBM) (3). The most striking clinical feature of IDH-mutant (IDH-1 or IDH-2) gliomas, irrespective of tumor grade and histology, is their survival advantage when compared to IDH-wildtype gliomas. Although these tumors exhibit profound alterations to their genetic, metabolic and immunologic make up, it is still unclear what drives this survival advantage. Since its discovery, the R132H IDH mutation has changed the way that glial tumors are conceptualized and consequently treated, and it is well appreciated that the underlying biology and clinical behavior of these tumors are distinct and respond differently to current treatment paradigms (4).

While patients bearing IDH-mutant tumors have improved prognoses compared to those with wildtype tumors, most eventually succumb to disease, exacting a significant toll on human lifespan and productivity. Given that IDH-mutant glioma patients maintain the mutant allele throughout progression and even after recurrence to higher grade, this highly conserved genetic alteration, expressed solely in tumor cells, represents an attractive therapeutic target, including, potentially, for immunotherapy.

To date, most brain tumor immunotherapy clinical trials have engaged subjects with GBM, most of which is genotypically IDH-wildtype. Far fewer protocols have been available for patients with low-grade and anaplastic glioma (5). However, there has been an increasing effort to target mutant IDH through small molecule inhibitors, immune checkpoint inhibition, and vaccination, both preclinically and in human subjects (6,7). As we assess disease response, it is crucial that we comprehensively study and understand the interactions between host immunity and IDH-mutant tumors within the central nervous system (CNS). 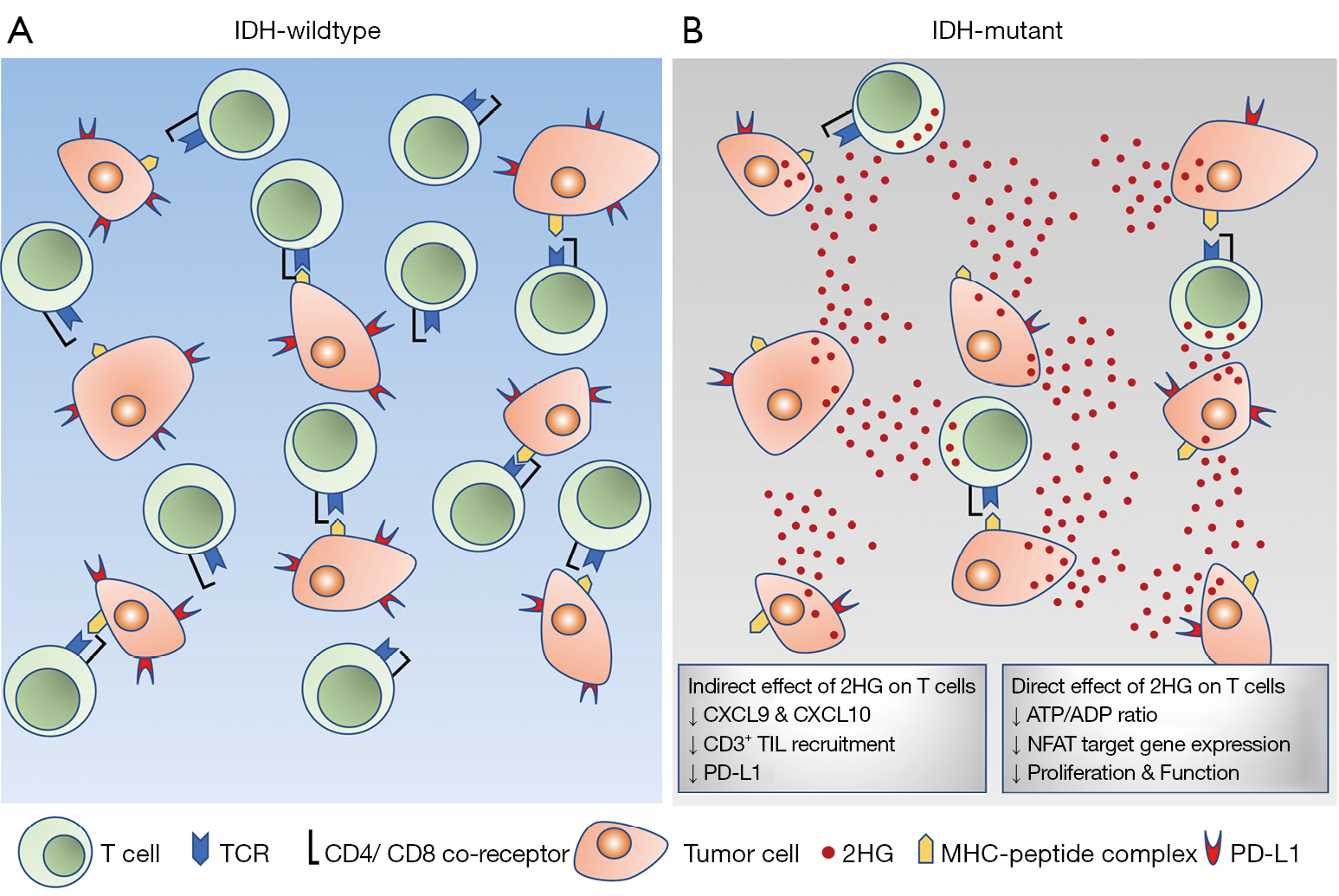 Nevertheless, mounting evidence suggests that the enzymatic product of mutant IDH plays a role in modulating anti-tumor immunity. (R)-2-hydroxyglutarate (2HG) is an oncometabolite produced by the neomorphic activity of the mutated IDH enzyme, which catalyzes the conversion of α-ketoglutarate to 2HG (12). The accumulation of 2HG leads to DNA hypermethylation through the inhibition of key histone demethylase enzymes (13). 2HG-mediated hypermethylation leads to epigenetic dysregulation, resulting in the repression of key immune related genes (10). 2HG appears to inhibit CD8+ T cell recruitment in IDH-mutant gliomas. In one preclinical model, the introduction of 2HG, either transgenically or through therapeutic delivery, led to the diminished leukocyte production of C-X-C motif chemokine 9 (CXCL9) and C-X-C motif chemokine 10 (CXCL10) through the suppression of signal transducer and activator of transcription 1 (STAT1). This in turn resulted in reduced CD8+ T cell infiltration of tumors, consistent with observations in human immunohistochemistry (IHC) studies. Importantly, blocking the production of 2HG through an IDH inhibitor reversed this immunosuppressive phenotype (9). While tumor intrinsic epigenetic dysregulation is implicated as one source of immune impairment in IDH-mutant gliomas, a recent study published in Nature Medicine by an international multicenter group introduces an additional mechanism, centered around the direct effect of 2HG on tumor infiltrating T cells (14).

Central questions remain. For instance, why do patients with IDH-mutant glioma live longer despite such baseline intratumoral immune quiescence? What other aspects of the IDH-modulated tumor immune microenvironment may impact the natural course of disease in these tumors? Though touched upon by Bunse and colleagues, further study is needed to determine the effects of 2HG on infiltrating myeloid cells, that are often present at greater frequencies than T-cell populations within the glioma tumor microenvironment. Do myeloid lineage cells import 2HG as do the T cells and, if so, does intracellular accumulation of 2HG influence tumor associated macrophage polarization? As 2HG is exported from tumor cells into extracellular spaces and can be detected systemically (15), does it exert effects on tumor immunity beyond the immediate tumor milieu?

Clinical questions that remain unanswered include whether WHO grade is associated with the host immune response to IDH-mutant tumors, and what might be the impact of either tumor progression or contemporary treatment of these tumors, including ionizing radiation and alkylating chemotherapy. Does therapeutic induction of a hypermutated state render these tumors more immunotherapy responsive, mimicking the state of mismatch repair deficiency in colorectal carcinoma (16), or is persistence of the IDH mutation sufficient to maintain hyporesponsiveness over time?

Bunse et al. and others have provided ample mechanistic support for going forward with clinical studies combining latest or next generation IDH inhibitors with immunotherapy, whether it be vaccination, IDH-directed adoptive T lymphocyte transfer, or immune checkpoint blockade. While IDH mutations may be oncogenic and drive tumor-associated immunosuppression, they may also provide keys to eradicating these tumors, using rational combinations of molecularly targeted therapy and immunotherapy. Given the relatively long survival of patients with IDH mutant low-grade gliomas, surrogate markers of immune and tumor response will be of great use in these future studies.

This work was supported by the Jenny Fund (www.thejennyfund.org).