Globally, hepatocellular carcinoma (HCC) accounts for approximately 90% of all primary liver cancers. HCC is one of the leading causes of cancer-related deaths, of which 50% occur in China (1). Currently, the most effective treatment for HCC remains surgical treatment. However, because of the lack of effective strategies for early diagnosis, only 30–40% of patients with HCC are considered suitable for radical resection. Nevertheless, because of the high recurrence and metastasis rate following surgery, the prognosis of these patients with HCC remains poor (2). Therefore, more effective tumor markers are the key to early diagnosis, early treatment, and improved prognosis of HCC.

Circular RNA (circRNA) is a type of noncoding RNA that is widely detected in mammals. circRNA is primarily involved in gene regulation in vivo (3-5). Most of the circRNAs are derived from the exon region of the gene, whereas a small part is formed by intron splicing (6,7). Unlike long noncoding RNAs (lncRNAs) and microRNAs (miRNAs), circRNA does not contain a 5’ end and a 3’ end structure; they are formed by a covalently closed cyclic structure (8). CircRNA is widely involved in human physiological and pathological regulation: (I) circRNA can act as a miRNA “spill” (miRNA sponge); (II) circRNA could interact with target proteins, and (III) circRNA can be translated into peptides (9). Studies on cancer have reported that circRNA acts as “miRNA cavernous body” and could indirectly regulate downstream target genes (10,11). It has been reported that one circRNA contains at least one miRNA binding site. Moreover, circRNAs can adsorb miRNA as a “cavernous body” of RNA. Therefore, circRNAs could regulate gene expressions through the mechanism of competitive endogenous RNAs (ceRNAs) (9). In 2010, Pandolfi et al. have proposed that lncRNAs, pseudogene RNA, and circRNA contain a common site that can be bound by miRNAs (12). The competitive binding of miRNAs leads to the formation of a mutually regulated network between these different types of RNA that plays an important role in the various cell physiological processes (13). In HCC, a previous study has suggested that circHIPK3 can act as a “cavernous body” to adsorb miR-124. Therefore, IL6R and DXL2 expressions were upregulated via the ceRNA mechanism, thereby promoting the proliferation of HCC cells (14). Although the current studies have suggested the importance of its role in liver cancer, additional number of circRNAs and their detailed functions in HCC remains to be evaluated in the future.

The present experiment was approved by the Committee on the Ethics of Sun Yat-sen University (approval No. SYSU-20161078). All subjects were completely informed about the study goals and procedure and provided their signed informed consent. The HCC tissues and their paired pericarcinomatous tissues of 20 patients with HCC were collected according to the standard operation procedures at a third affiliated hospital of the Sun Yat-sen University. The biopsies were immediately frozen and stored at −80 °C until further processing for total RNA preparation.

The LO2 cells, HepG2 cells, Huh7 cells, 97L cells, 97H cells, Hep3B cells, and LM3 were obtained from ATCC (Virginia, USA) and maintained in RPMI 1640 with 10% (v/v) FBS (Invitrogen, USA). The culture medium contained 100 U/mL penicillin/streptomycin. The cells were cultured in a humidified chamber with 5% CO2 at 37 °C. After 3 days, 0.25% of trypsin (Thermo Fisher Scientific, USA) was routinely used for digestion. The log phase cells with excellent growth conditions were selected for further experimentation. Sequence hsa_circ_0002124 was downloaded from the cirBase database (http://www.mirbase.org/). The circRNA overexpression vector PCDNA 3.1-circRNA was purchased from Addgene (USA). In the present study, we selected 97H cells to perform cell transfection. The QIAGEN Plasmid Mini Kit (QIAGEN, Germany) was used to obtain purified plasmids according to the manufacturer’s protocol. Subsequently, PCDNA 3.1-circRNA was transfected into 97H cells via the Lipofectamine 3000 Transfection Reagent (Thermo Fisher Scientific, Waltham, MA, USA). The PCDNA 3.1-circRNAs were added to the transfection reagents diluted in the Opti-MEM medium. The mixture was incubated at room temperature for 10–15 min to form the PCDNA 3.1-circRNA–transfection reagent complexes, followed by its addition to the cells and further incubation for 48 h. Moreover, double-stranded siRNAs (dsRNA) targeting hsa_circ_0002124 were synthesized by chemical methods (ReiBo Biotech, China). The nucleotide sequence of the dsRNA for hsa_circ_0002124 was 5'-CUCCAGACAAAUUAUUACC-3' and 3'-GAGGUCUGUUUAAUAAUGG-5'. The nucleotide sequence of the control siRNA from a scramble sequence was 5'-UUCUCCGAACGUGUCACGUTT-3' and 3'-TTAAGAGGCUUGCACUGAGCA-5'. The cells were seeded at 5×105 cells per well in 6-well plates in DMEM containing 10% FBS without penicillin and streptomycin and incubated overnight. Transfection experiments were performed with the OPTI-MEM serum-free medium and Lipofectamine 2000 reagent at a final siRNA concentration of 100 nM. qRT-PCR was performed to validate the effectiveness of the treatments.

Hsa_circ_0002124 were uploaded into the function annotation portal of DAVID database, as described previously (18). Following the enrichment annotation, a list of GO items were obtained. The related pathways of the parental genes of has_circ_0002124 were analyzed using KEGG. P<0.05 and FDR <0.05 were considered significant.

Cytoscape is an online bioinformatics resource platform for constructing biomolecular interaction networks (18). To investigate the ceRNA mechanism of hsa_circ_0002124, the target miRNAs and genes were analyzed using Cytoscape platform to identify the densely connected region in the PPI network from the STRING database (19).

Mock-vehicle-treated 97H cells (2.9×106) and overexpressed hsa_circ_0002124-treated 97H cells were treated with pre-cooled cell lysate (volume ratio of PMSF: RIPA cell lysate =1:120). The slurry was centrifuged with 13,000 r/min for 5 min (in a low-temperature mode). Subsequently, the supernatant was transferred to a new 1.5-mL tube, which was immediately stored at −80 °C. The protein loading buffer was added to the collected protein samples. The mixture was heated on a 100 °C boiling water bath for 5 min to completely denature the protein. Thereafter, these proteins were transferred onto a polyvinylidene difluoride membrane (Millipore, USA). After being blocked for 1 h at room temperature, the membrane was incubated with rabbit polyclonal anti-mouse p-JNK (1:2,000), JNK (1:2,000), p-ERK (1:2,000), ERK (1:2,000), p-P38 (1:2,000), P38 (1:2,000), c-Myc (1:2,000), and β-Actin (1:2,000) antibody (BOSTER, USA) for 12 h. Subsequently, the treated proteins were incubated with the corresponding secondary antibody (1:2,000 dilution) for 1 h at room temperature (BOSTER, USA). An ECL chemiluminescence detection kit was used to stain the protein bands (Beyotime Institute of Biotechnology, China), and the Odyssey Infrared Imaging System (LI-COR Biosciences, USA) was used to observe and quantify the protein bands.

Data were plotted and assessed using Graphad Prism software and expressed as mean ± standard deviation (mean ± SD). Two independent sample t-tests and two-way ANOVA were used in the experiment, and the difference obtained was considered significant at P<0.05. 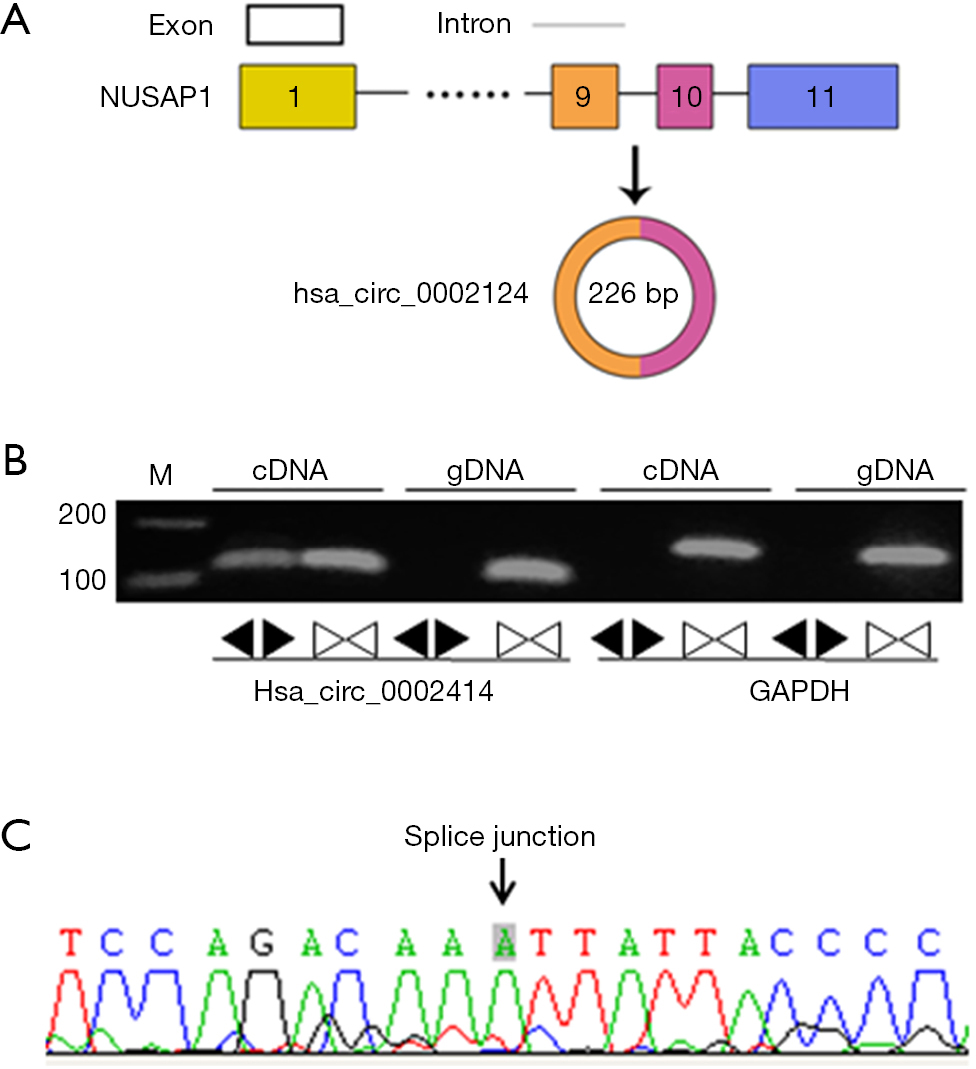 The hsa_circ_0002124 expression was upregulated in HCC cells and clinical samples 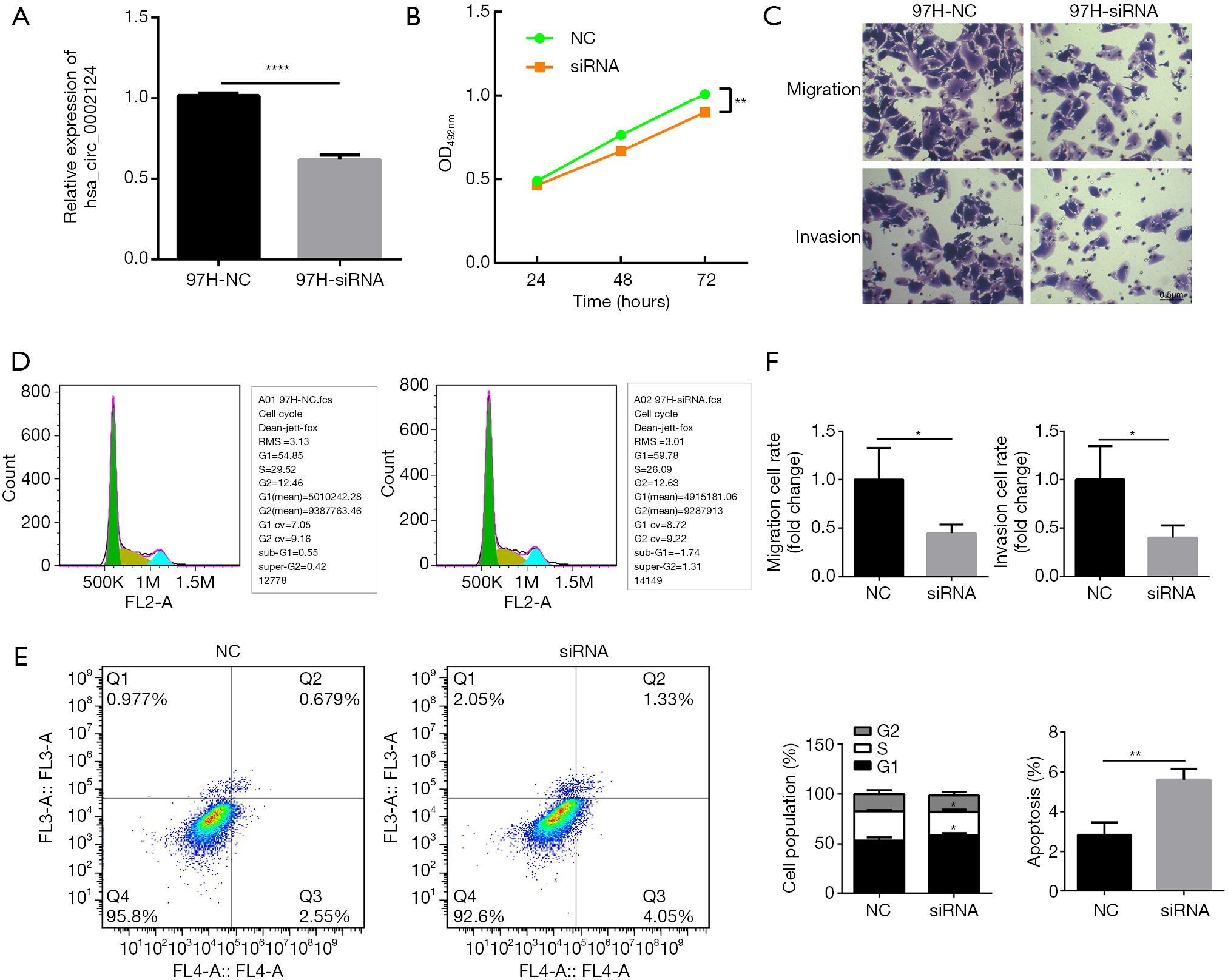 As shown in Figure 5A, the results from GO verified that hsa_circ_0002124 were significantly clustered in Biological Process (BP), Cellular Component (CC), and Molecular Function (MF). The three most significant GO terms in BP were cellular process, biological regulation, and single-organism process, those in CC were cell, cell parts, and cell organelles, and that in MF was binding. In the KEGG analysis, the targets were enriched in the following pathways: Pathways in cancer, PI3K-AKt signaling pathway, HTLV-I infection pathway, and MAPK signaling pathway (Figure 5B). 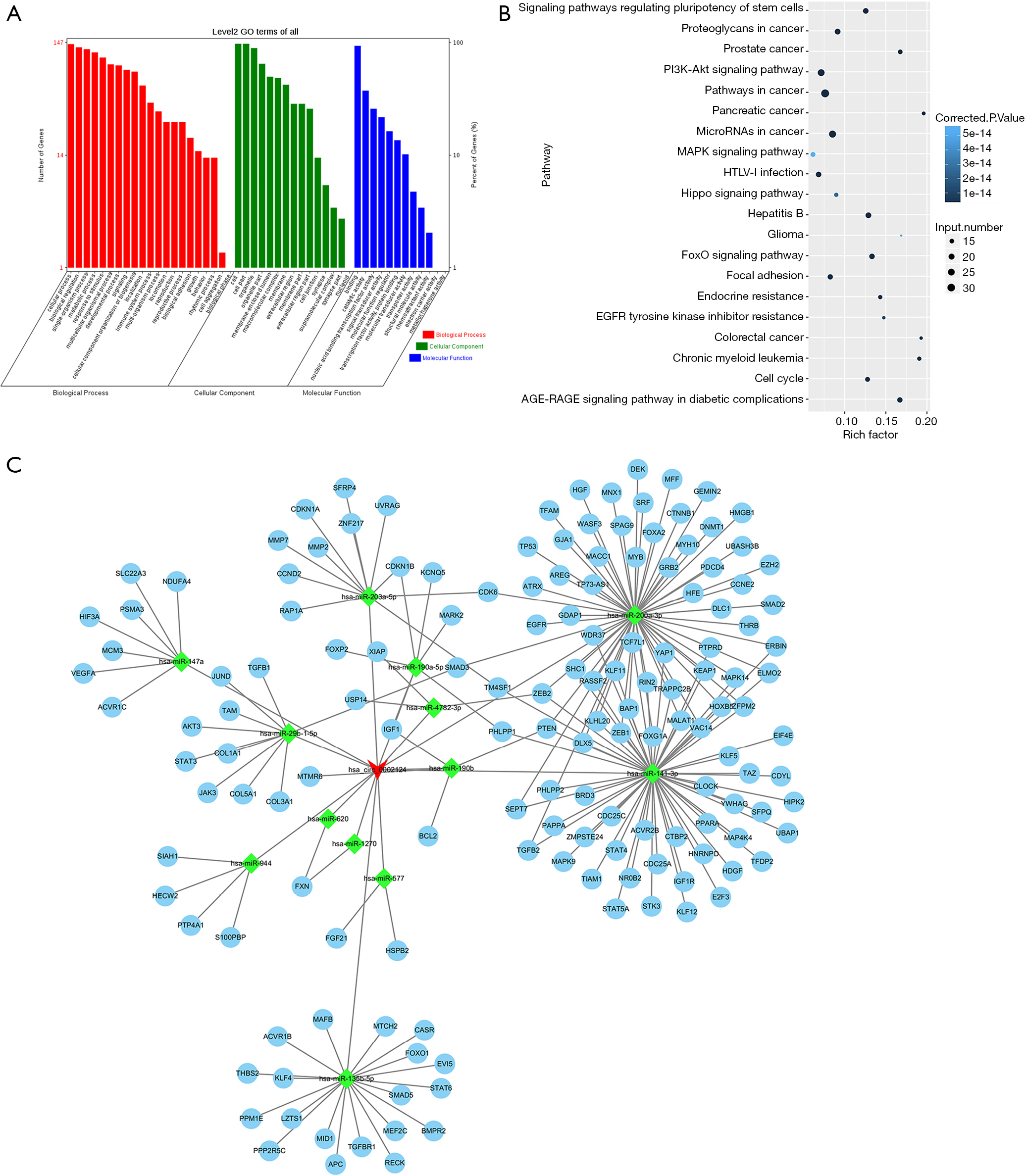 In the past few decades, although circRNA has been reported as a by-product of splice-mediated splicing errors (9), it had not attracted sufficient attention from researchers (20). However, with the widespread application of high-throughput sequencing technology and bioinformatics, it has been revealed that circRNA is ubiquitous in eukaryotes (21). Increasing evidence has indicated that circRNA could form a closed loop structure by nonlinear reverse splicing, and its expression is the characteristic of tissue-specific, cell-specific, and growth-stage variability (22,23). In cancer, circRNAs can act as a competitive endogenous RNA or miRNA molecular sponge, which could be involved in cancer development (9). Other circRNAs contain a miRNA binding site that could inhibit mRNA degradation by competitively binding to miRNA (24). For example, cir-ITCH can act as a molecular sponge of miR-7, miR-17, and miR-214, inhibiting Wnt/β-Catenin signaling pathway in esophageal squamous cell carcinoma (25). Moreover, ciRS-7 participates in the development and progression of gastric cancer by interacting with miR-7 (26). Furthermore, Hsa_circ_0005386 regulates Notch1 expression by interacting with miR-129-5p in the HCC process, thereby indicating that it can be a potential biomarker for HCC diagnosis (27).

Hsa_circ_0002124 is located at chr15:41667909-41669502, which is the region of intron 9 in NuSAP1. A previous study has shown that NuSAP1 is a microtubule-binding protein that plays an important role in spindle assembly. Its excessive expression leads to the aggregation of microtubules, resulting in a variety of cell arrest and spindle formation inhibition (28). The NuSAP1 mRNA expression levels and protein levels are strictly regulated, which was adapted to the cell cycle process. The NuSAP1 expression reaches its peak in the G2/M period, and the deduction of its expression can lead to stagnation (29). In recent years, the NuSAP1 overexpression has been noted in several tumors, such as pancreatic cancer, melanoma, glioblastoma, childhood acute lymphoblastic leukemia, breast cancer, and acute myeloid leukemia. The NuSAP1 overexpression in tumor is often associated with cancer cell invasiveness (30). For example, Gulzar et al. have reported that recurrence following prostatectomy is significantly associated with transcriptional ascending of NuSAP1. Furthermore, the elevated transcription levels are associated with poor postoperative prognosis in prostate cancer (31). Therefore, NuSAP1 is considered a new biomarker for prostate cancer. Satow et al. have found that the NuSAP1 expression was upregulated in HCC tissues. However, the detailed molecular mechanism remains unclear (32).

Ethical Statement: The present experiment was approved by the Committee on the Ethics of Sun Yat-sen University (approval No. SYSU-20161078). All subjects were completely informed about the study goals and procedure and provided their signed informed consent.