Prostate cancer (PC) is the second leading cause of cancer death in American men (behind lung cancer), being responsible for 29,430 deaths annually (per 2018 estimates of the American Cancer Society). The vast majority of PCs (>95%) arise as adenocarcinomas, which are frequently dependent (at least initially) on the AR axis for their growth and express AR target genes, such as KLK3 [prostate-specific antigen (PSA)]. For that reason, androgen deprivation therapy (ADT), that targets testicular production of testosterone, is a core treatment for advanced and metastatic prostate adenocarcinoma and achieves high initial response rates. Unfortunately, resistance to ADT eventually emerges, via a wide variety of mechanisms (1,2), and the disease progresses to CRPC. Nelson (3) has elegantly described a framework of molecular states that the AR axis transitions through as it develops resistance to hormonal therapy: in state 1 (endocrine androgen-dependent and AR-dependent), prostate adenocarcinoma cells depend on high circulating testosterone levels of testicular origin and, consequently, are very sensitive to ADT. In state 2 (intracrine androgen-dependent and AR-dependent), after the suppression of circulating testosterone by ADT, CRPC cells eventually emerge, where AR can be activated via in situ androgen synthesis or via conversion of adrenal precursors, such as DHEA (4). These sources of androgens can be inhibited by second-generation inhibitors (such as abiraterone) or AR antagonists (such as enzalutamide and apalutamide). In state 3 (androgen-independent and AR-dependent), the AR remains active in the absence of canonical ligands via crosstalk with other signal transduction pathways, or via expression of constitutively-active AR variants that lack the ligand-binding domain. In state 4 (androgen-independent and AR-independent), AR signaling is abolished, and tumor progression is driven by other oncogenic transcriptional programs. Eventually, in the face of adaptive epigenetic plasticity triggered by the hormonal therapy and of selective pressure on the AR axis, a cancer that was originally composed of AR-positive and AR-dependent cells evolves into an AR-independent (or “AR-indifferent”) and possibly even AR-negative CRPC state that lacks expression of AR-target genes such as KLK3 (PSA). Instead, it expresses neuroendocrine markers, such as chromogranin A, synaptophysin, and neuron specific enolase (NSE) (5,6). This treatment-related neuroendocrine PC (NEPC) is present in nearly one fifth of patients with metastatic CRPC and is associated with shortened survival (7).

NEPC and its drivers

NEPC, also referred to as anaplastic PC, is an aggressive subtype of PC that frequently metastasizes to visceral sites (much more commonly than adenocarcinoma) (8). Overexpression and gene amplification of Aurora kinase A (AURKA) and N-myc (MYCN) are involved in the development of NEPC, and may be therapeutic targets (6,9). Other key events that drive treatment-related NEPC are the loss of tumor suppressor genes TP53 and RB1 and the derepression of the expression of AR-repressed genes, such as the master neural transcription factor (TF) BRN2 (encoded by POU3F2) (10) and the placental development gene PEG10 that promotes cell-cycle progression and suppresses apoptosis (11). These signaling pathways cooperate with SOX2 and EZH2 to promote adaptive lineage plasticity and neuroendocrine differentiation (12). The clonal origin of NEPC from prostate adenocarcinoma is further supported by the presence of the PC-specific TMPRSS2-ERG gene fusion in about half of treatment-related NEPCs, similarly to its frequency in conventional prostate adenocarcinoma (6).

Still, however, NEPC remains much less studied and understood compared to prostate adenocarcinoma and, clinically, in desperate need of effective therapies. Platinum-based chemotherapy has some activity against NEPC, but it is highly toxic and short-lived in its efficacy. It is also not fully understood how the adaptive epigenetic switch from an AR-driven to an AR-independent transcriptional program happens and which other TFs take over for the pivotal role of AR in early prostate adenocarcinoma.

Discovery of the pivotal role of ONECUT2 in CRPC and NEPC

Now, Rotinen et al. (13) have found that ONECUT2, a homeobox protein TF also known as HNF6β, is a targetable master regulator of CRPC and that it suppresses the AR axis to promote emergence of NEPC. They applied computational modeling to a collection of 38 transcriptome datasets from 2,115 PC cases, including 260 samples of metastatic CRPC and predicted that ONECUT2 is a key regulator of transcriptional networks in metastatic CRPC. Their modeling predicts that the activity of ONECUT2 is comparable to that of EZH2, a known CRPC driver, and that ONECUT2 forms a network with other key TFs, such as POU5F1 (Oct-4), PAX5, AR, and EZH2. Overall, the activity of the ONECUT2 network and, in support, ONECUT2 expression itself increase gradually from benign prostate tissue to low-grade to high-grade PC to CRPC. It is interesting that AR expression exhibits a different pattern, where increased expression is not observed until the CRPC state. Moreover, ONECUT2 activity and expression are higher in PCs with low AR activity. Direct experimental modulation of ONECUT2 levels via exogenous forced expression or gene silencing revealed that ONECUT2-induced genes were enriched in pathways related to cell motion/migration, neuronal differentiation, mesenchymal cell differentiation, epithelial-mesenchymal transition, and PC aggressiveness, whereas ONECUT2-repressed genes were enriched in pathways corresponding to cell surface interactions, and, very importantly, AR activity.

The inverse correlation between ONECUT2 expression/activity and AR transcriptional activity is mediated by direct signaling effects. Exogenous forced ONECUT2 expression repressed the expression of canonical AR-target genes, such as KLK3 (PSA). ONECUT2 directly repressed AR mRNA and protein levels, including that for constitutively-active AR variants, via binding to the AR promoter and to an AR intron, consistent with ONECUT2 acting as a direct repressor of AR gene expression. ONECUT2 also can bind the FOXA1 promoter and gene body and repress FOXA1 mRNA and protein expression in PC cells. FOXA1 is both a pioneer factor that facilitates AR binding to chromatin and formation of the AR holocomplex (15), as well as an inhibitor of neuroendocrine differentiation. Moreover, Rotinen et al. (13) found that many promoters of AR-target genes contain shared ONECUT2–AR binding sites, allowing for ONECUT2 and AR cobinding to some of these regions, and that exogenous forced ONECUT2 expression led to repression of these genes, suggesting that ONECUT2 and AR can act in direct functional opposition at promoter sites throughout the genome. Thus, collectively, Rotinen et al. (13) uncovered at least three mechanisms for the inhibitory effect of ONECUT2 on the AR axis: (a) suppression of expression of AR itself; (b) suppression of expression of the pioneer factor FOXA1 and; (c) a direct antagonistic effect of ONECUT2 on a subset of the AR-regulated transcriptome.

The observation that ONECUT2 represses AR and FOXA1 suggests that ONECUT2 may play a role in the emergence of NE properties in CRPC. Moreover, ONECUT2 can also function independently of AR, and can potentially regulate over 500 TF genes on the basis of ONECUT2 binding to gene promoters, consistent with a role as the master regulator of TF networks. Indeed, ONECUT2 expression is higher in human CRPCs with neuroendocrine features compared to CRPCs that have still retained adenocarcinoma differentiation. Exogenous forced expression of ONECUT2 in PC cells led to increase in markers of neuronal and neuroendocrine differentiation, while depletion of ONECUT2 suppressed neuroendocrine differentiation. Moreover, Rotinen et al. (13) found ONECUT2 to be a direct upstream activator of another NEPC driver, PEG10.

So what drives the increased expression of ONECUT2 in NEPC? Rotinen et al. (13) further identified REST as a direct upstream repressor of ONECUT2 expression via a conserved REST-binding site in the ONECUT2 promoter. REST is an AR-interacting protein that is recruited to promoters of androgen-regulated genes upon hormone treatment and can inhibit gene expression. Androgens can reduce REST turnover by inhibiting the expression of β-TRCP, a known ubiquitin ligase of REST, leading to REST accumulation and translocation to the nucleus where it can bind chromatin regions occupied by the AR (16). REST transcriptionally represses not only neuronal genes but also genes involved in cell cycle progression, including Aurora Kinase A, which drives NEPC (16). REST is downregulated in NEPC (17), thus allowing ONECUT2 upregulation. Collectively, these data position ONECUT2 between AR, REST and PEG10 in a transcriptional network that drives transdifferentiation of adenocarcinoma to NEPC (Figure 1). 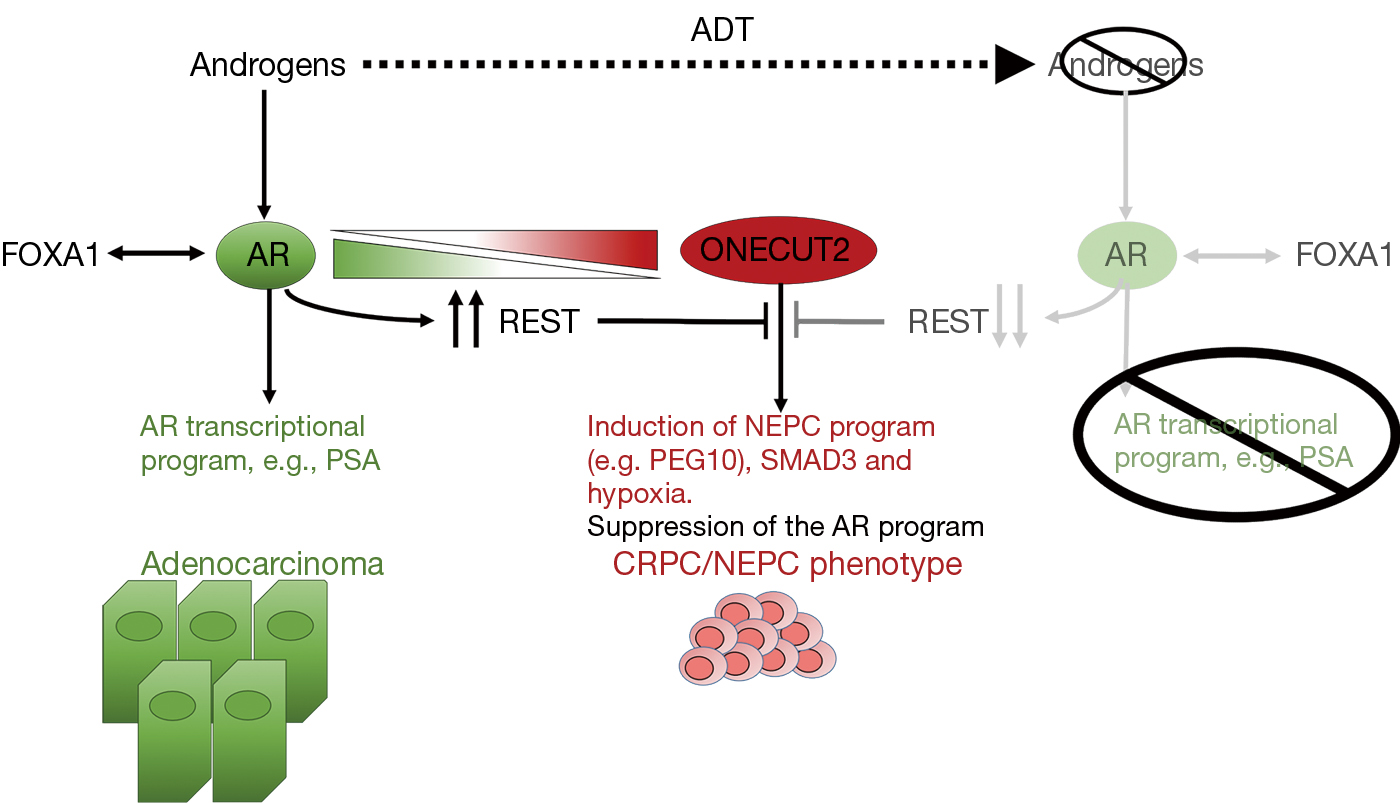 Rotinen et al. (13) further found that silencing ONECUT2 in various PC cell lines caused apoptosis and/or growth inhibition in vitro and reduced tumor burden, tumor weight and metastatic growth in vivo. Analysis of additional human datasets showed that high expression of ONECUT2 mRNA is associated with biochemical recurrence and higher risk of disease progression. Taken together, all these results suggest that ONECUT2 might be a clinically relevant therapeutic target in the context of CRPC and NEPC. This led Rotinen et al. (13) to use a 3D model of the ONECUT2-HOX domain for a structure-based screen of a 500,000-small molecule chemical library in order to identify small-molecule inhibitors of ONECUT2. One compound hit from the screen, CSRM617, which was subsequently confirmed via SPR to bind directly to ONECUT2-HOX and compete against its binding to DNA, inhibited cell growth and induced apoptosis in several ONECUT2-positive PC cell lines in vitro, and also significantly reduced PC xenograft volume, weight and metastasis in vivo, without affecting body weight. CSRM617 also demonstrated significant downregulation of ONECUT2-induced genes, including PEG10, in vitro and in vivo.

Taken together, the studies of Rotinen et al. (13) and Guo et al. (14) convincingly show that the TF ONECUT2 is a targetable master regulator of lethal PC that displaces and replaces AR as a driver and survival mechanism in CRPC/NEPC (Figure 1). The capacity of the newly identified small molecule CSRM617 to inhibit ONECUT2 and exert anticancer activity in PC models is highly encouraging. Moreover, the link between ONECUT2 and hypoxia also has translational implications. It remains to be seen whether CSRM617 or a hypoxia-activated prodrug like TH-302 or similar compounds will have a clinical impact and will address the unmet need for agents that can help patients with NEPC.

More broadly, the work of Rotinen et al. and Guo et al. further supports the concept that the emergence of NEPC is not the result of a random, stochastic event that simply happens to provide resistance to therapy, but is the inescapable consequence of a deterministic process triggered (de-repressed) in PC cells by ADT. The neuroendocrine transcriptional program is normally actively repressed in prostate luminal epithelial cells by AR, and profound AR axis inhibition is evolutionarily destined to lead to NEPC at some point. This suggests that our therapeutic goal in PC should not be to just accomplish even deeper AR inhibition, because that will simply push more PCs into overt NEPC. Instead, we need innovative approaches that will target all oncogenic signaling network drivers across the entire PC spectrum, from adenocarcinoma to CRPC and NEPC.

The authors acknowledge the joint participation by Adrienne Helis Malvin Medical Research Foundation through its direct engagement in the continuous active conduct of medical research in conjunction with Baylor College of Medicine.

The authors also would like to acknowledge the assistance of the Dan L. Duncan Cancer Center (supported by the NCI Cancer Center Support Grant P30CA125123).