Among the multitude of markers involved into the breast cancer tumorigenesis as EGFR, RANK (8), BRCA1 and BRCA2 are the first two genes found directly related to hereditary breast cancer. BRCA1 is located on 17q21.31, and the exon count is 24. BRCA2 is located on 13q13.1, and the exon count is 27. Both BRCA1 and BRCA2 are considered tumor suppressor gene which involved in maintenance of genome stability, specifically the homologous recombination pathway for double-strand DNA repair. Inherited mutations in BRCA1 and BRCA2, confer increased lifetime risk of developing breast cancer (9). Due to the length of BRCA1/2, and the randomness of mutation sites, using the traditional sanger sequencing, qPCR, or MLPA to detect the whole gene is not ideal. In contrast, the high throughput next-generation sequencing (NGS) could be more efficient, that can detect all the exons and their adjacent regions of BRCA1/2 at a time.

As is mentioned in several published research (10-13), compared with other countries, Chinese women carry different BRCA mutations rate and types. In this study, we tried to figure out a detailed BRCA1/2 germline and somatic mutation spectrum in young Chinese breast cancer patients.

A total of 54 female patients diagnosed with breast cancer were enrolled in this study, of which 27 patients (mean age 32 years, range, 23–40 years) diagnosed at the age younger than 40 and the rest 27 (mean age 52 years, range, 41–68 years) diagnosed at the age older than 40 in West China Hospital from January 2010 to December 2016 consecutively, belonging to study group and control group, respectively. DNA of 54 FFPE samples of cancer tissue were collected to test the somatic BRCA1/2 mutations, while DNA of 31 blood samples and 23 FFPE samples of normal tissue were used to exclude the germline BRCA1/2 mutations by two NGS platforms PGM and Miseq. Clinicopathological characteristics were reviewed including age, estrogen-receptor (ER) status, progesterone-receptor (PR) status, human epidermal growth factor-2 (HER-2) status, Ki-67, molecular phenotypes, TNM staging, etc. Patients’ clinical information is showed in Table 1. Approval for the study was granted by the Ethics Committee of West China Hospital (number: 2013-191).

Next generation sequencing on PGM platform and Miseq platform

For Miseq platform, all purified libraries were quantified by real-time PCR using the SYBR Fast Illumina Library Quantification Kit (Kapa Biosystems) and pooled to give equal genome coverage from each library. Each multiplexed library pool was sequenced an Illumina MiSeq for 151 cycles from each end read according to the manufacturer’s instructions.

We then analyzed the sequencing data from both Miseq and PGM platforms using the BRCAimPLUS DNA pipeline-a customized bioinformatic analysis workflow for cancer panel. As other bioinformatic pipelines, it involves processing a series of data transformation steps: alignment, variant calling, annotation, filtering and reporting (14-17). 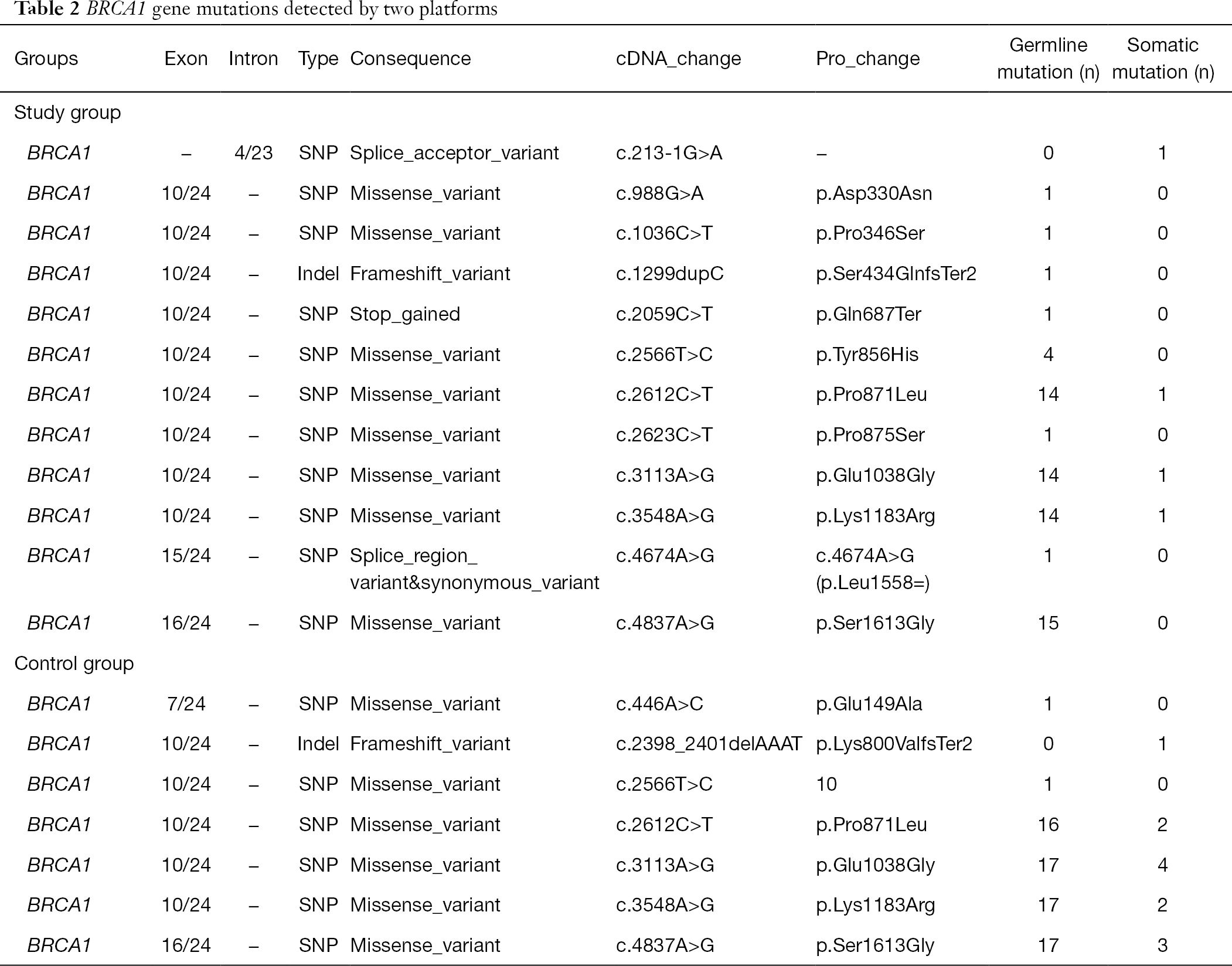 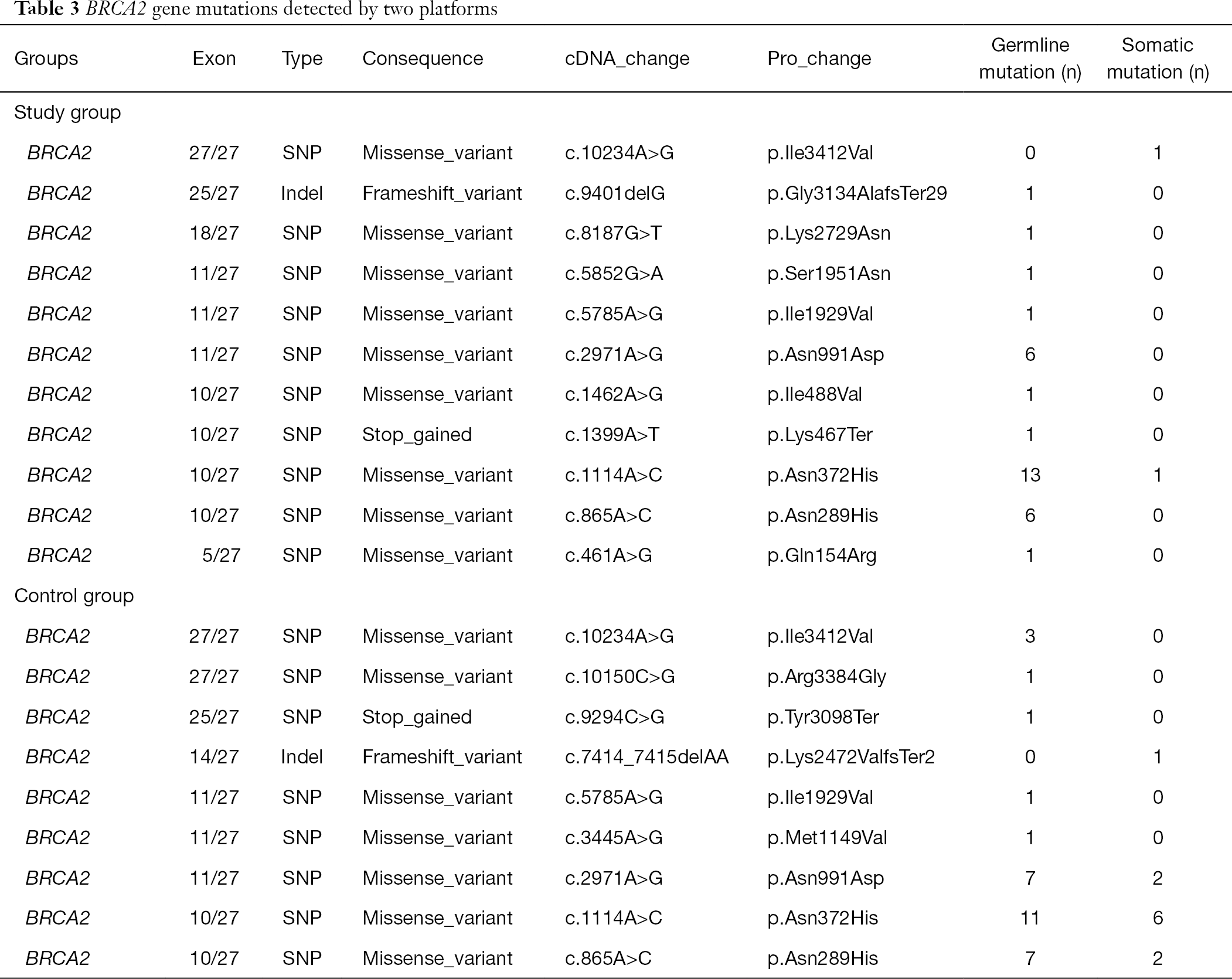 In study group, the 11 BRCA1 germline mutations detected were classified as following: 2 5-pathogenic, 4 3-uncertain, 5 1-benign, in accordance with the data found in ClinVar (Tables S1,S2). c.2623C>T was identified as novel germline mutation site found in a patient diagnosed as breast cancer at the age of 27 (Figure S1A). Among all, 4 mutations were found to be pending, while the rest were not found in BIC. According to the Leiden Open Variation Database, 2 mutations were definitely indicated to affect function. In COSMIC database, 4 mutations were found to be neutral. 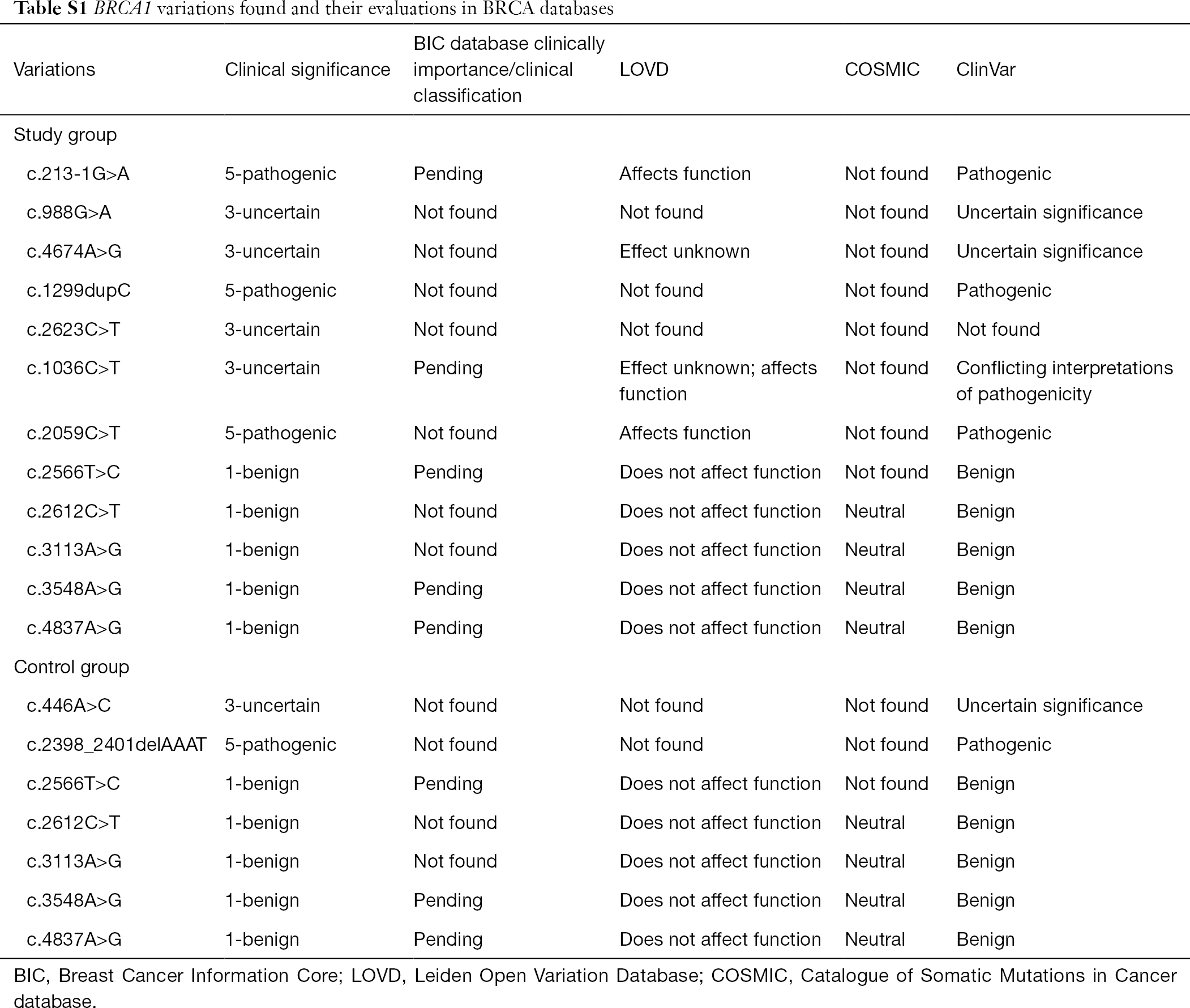 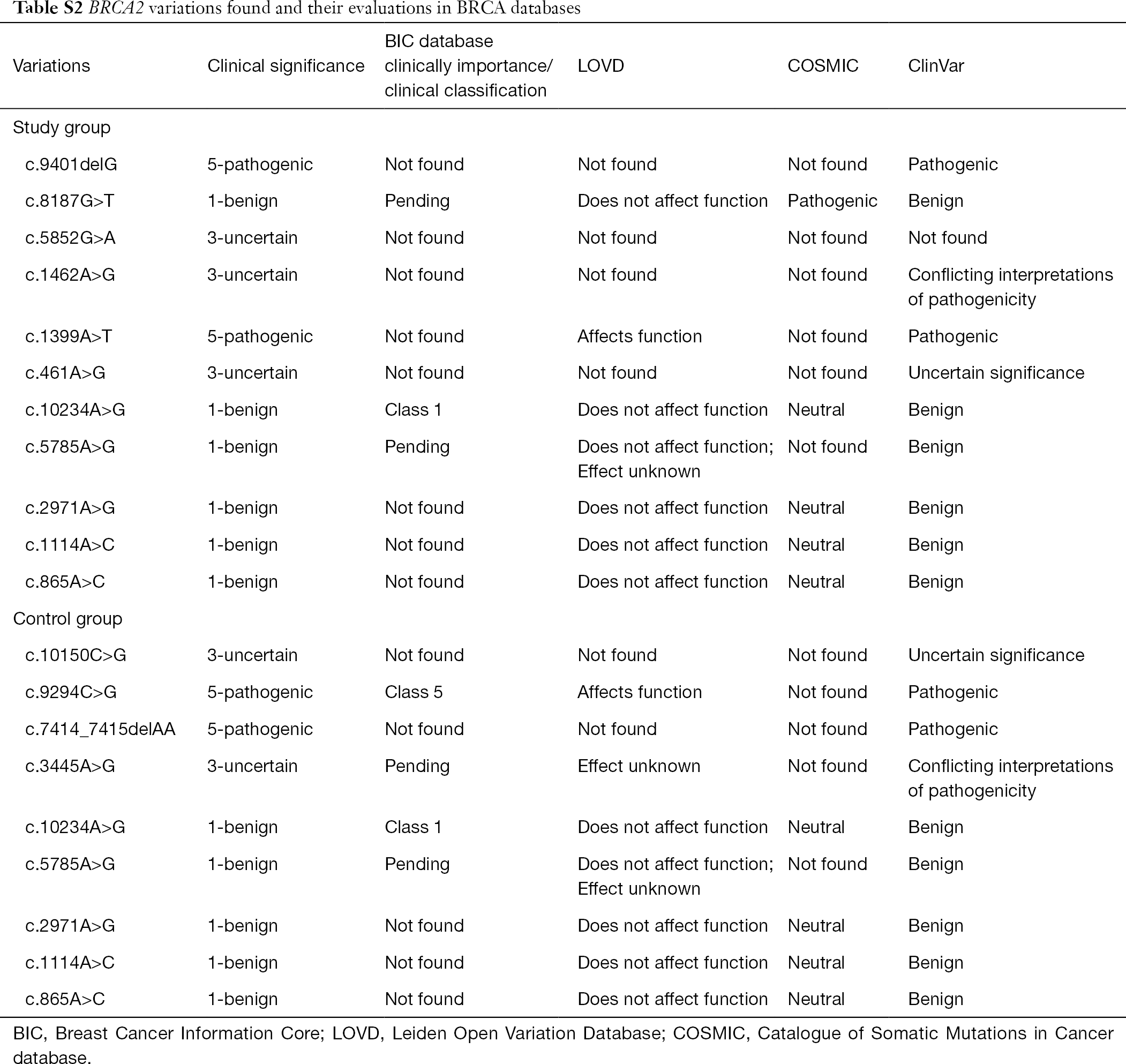 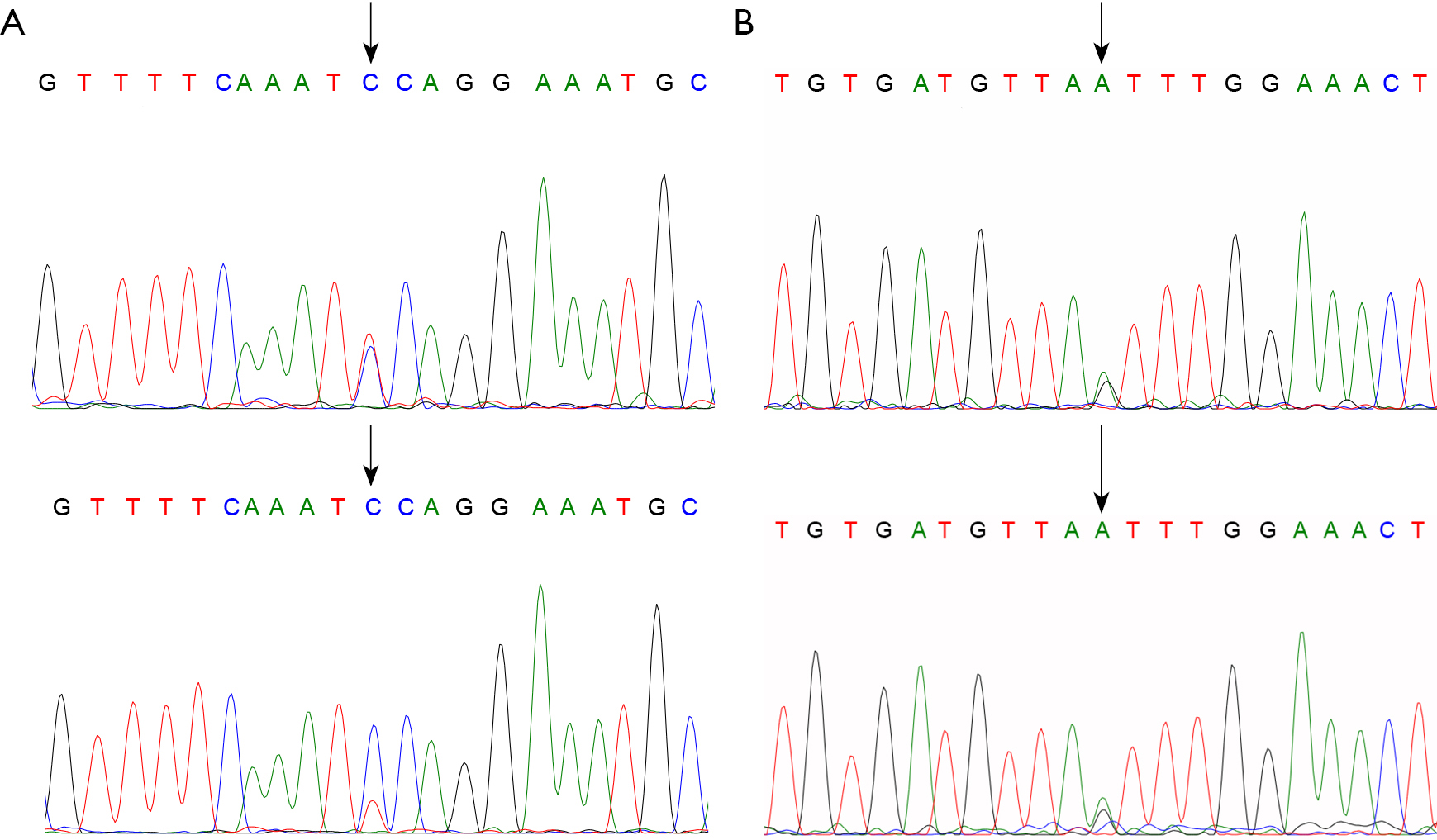 As for BRCA2, 10 germline mutations were detected involving 2 5-pathogenic, 3 3-uncertain, 5 1-benign in accordance with the data found in ClinVar (Tables S1,S2). c.5852G>A identified as a novel site found in a patient diagnosed as breast cancer at the age of 28 (Figure S1B). Among all, 1 mutation c.10234A>G was found to be class 1 in BIC database, 2 mutations were found to be pending, while the rest were not found in BIC. According to the Leiden Open Variation Database, 1 mutation was definitely indicated to affect function. In COSMIC database, 4 mutations were found to be neutral, and 1 referring to be pathogenic. 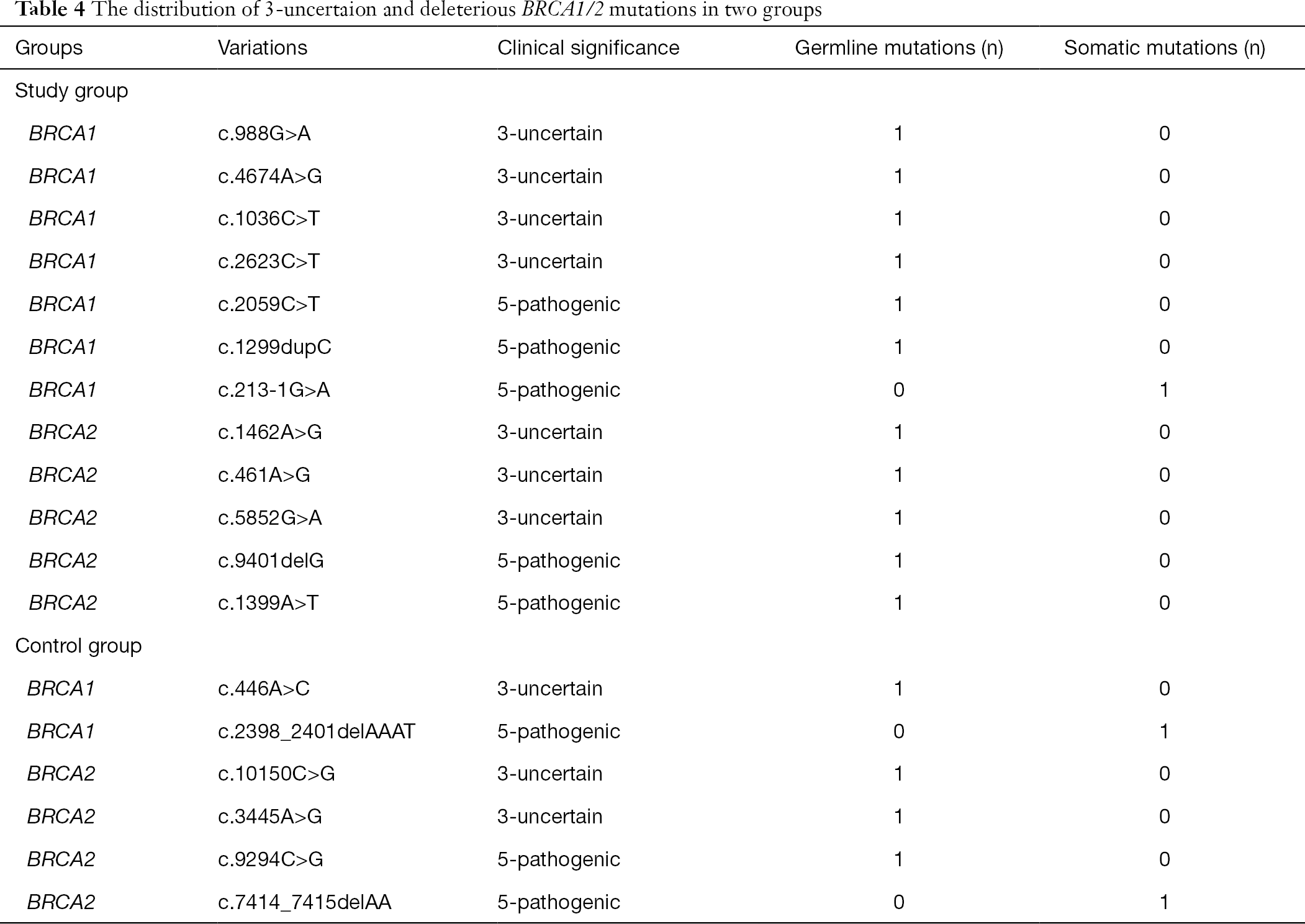 BRCA status is not only important for the identification of familial cancer predisposition but also to therapeutic choices for breast cancer patients, e.g., the PARP inhibitor therapy (21-23). BRCA gene mutation is closely related to the early-onset breast cancer occurrence. In most national and international guidelines, testing criteria of BRCA includes patients with breast cancer aged less than 35 or 40 years (24). BRCA1/2 mutation carriers diagnosed with breast cancer before age 50 are prone to a worse survival (25). In our study, the mean age of 27 early-age onset breast cancer patients was 32, with the minimum hospitalized age 23. Only 2 had no BRCA1/2 mutation. Twenty patients had BRCA1 mutations and 22 had BRCA2 mutations, with 3 (11.1%) patients had pathogenic mutations involving c.1299dupC, c.2059C>T, c.213-1G>A in BRCA1/2 (7.4%) had pathogenic mutations involving c.9401delG, c.1399A>T in BRCA2, which were not found in control group. The mutation frequency of the deleterious germline mutation in our study is a little bit higher than in other research (24,26,27) may attribute to insufficient number of analyzed cases.

One of the limitations of the study is the absence of triple negative samples in the study groups which is among the breast cancer histotypes the more aggressive with the poor prognosis caused by insufficient cases, but we tried to figure out a detailed spectrum of BRCA1/2 germline and somatic mutations of early-onset breast cancer patients in West China Hospital using NGS. Several deleterious and uncertain mutations were observed in this cohort and it is recommended that a more thorough and functional examination of these mutations should be conducted in the future.

Ethical Statement: Approval for the study was granted by the Ethics Committee of West China Hospital (number: 2013-191). And the study was done with all patients’ informed consent.