Chordoma is a rare and malignant bone tumor that arises from the remnants of the embryonic notochord (1). It mostly occurs at the sacrum, skull base and mobile spine (1). Chordoma is typically a low grade but remains a locally invasive malignant neoplasm (2,3). Currently, surgery remains the most effective treatment as the tumor is largely resistant to chemotherapy and radiotherapy (4). However, it still has high recurrence and metastasis after surgical resection (5). Therefore, the study of the mechanisms for chordoma development is an urgent necessity.

MicroRNAs (miRNAs), which are small non-coding single-stranded RNA molecules of about 18–25 nucleotides long, can regulate gene expression and function by mainly interacting with the 3'-UTR of their target mRNA (6). Increasing evidence has shown that miRNA dysregulation plays a critical role in tumor initiation and progression. They can act as tumor suppressors or oncogenes in numerous cancer types, including chordoma (7-9). For example, miR-1 was reported to be downregulated in chordoma and showed its inhibition effect in cell migration and invasion by targeting the gene slug in chordoma (10). Meanwhile, reduced miR-1237-3p expression was shown to be related with chordoma invasion and a worse recurrence-free survival of patients (11).

Recently, some reports have shown that miR-1290 is significantly involved in tumor invasion and proliferation (12-14). Our previous studies, by using miRNA array, demonstrated that miR-1290 was significantly down-regulated in chordoma compared to fetal notochord pulposus (FNP) (15). Survival analysis indicated that low expression of miR-1290 was significantly correlated with the invasion and recurrence of chordoma (16). However, the underlying mechanisms by which miR-1290 functions via target genes in chordoma remain unclear. Thus, further identification and validation of novel targets of miR-1290 is important for understanding the development of chordoma. In this study, we found that the over-expression of miR-1290 inhibited chordoma cell invasion and proliferation in vitro through Robo1, which is a miR-1290 target gene.

Sixteen sacral chordoma samples were collected from January 2010 to December 2016 at the First Affiliated Hospital of Soochow University (Suzhou, China). Ten fetal nucleus pulposus specimens were obtained from aborted fetuses with a gestational age of 8–24 weeks in the Department of Gynecology and Obstetrics. Parts of the samples were fixed in a 10% formalin solution and embedded in paraffin. Histologic sections were stained with hematoxylin and eosin for histology diagnosis. The other parts of the specimens were collected and preserved in liquid nitrogen. All the patients or their families were informed, and supplied standard written consent. Our study protocol was approved by the Ethics Review Committee of the Institutional Review Board of the hospital.

Immunohistochemical staining was carried out with an EnVision two-step staining method on 4-µm-thick tissue sections (17). The sections were dewaxed in xylene and rehydrated in ethanol before the antigen retrieval. The primary antibody (anti-Robo1, dilution at 1/50, Abcam) and secondary antibody were used. For positive control, tissue sections of human hepatocarcinoma with known positivity were used in each batch of staining. For negative control (NC), sections with phosphate-buffered saline were treated with an omission of the primary antibody. Immunostaining was evaluated by two independent pathologists blinded to clinical information. Tissue specimens were scored according to the color intensity and the number of positive cells. The intensity of the dye color was graded as 0 (no color), 1 (light yellow), 2 (light brown) or 3 (brown), and the number of positive cells was graded as 0 (0%), 1 (1–25%), 2 (26–50%), 3 (>50%). The two grades were added together, and specimens were assigned to low expression [0–2], or high expression [3–6].

Human chordoma cell line U-CH1 was obtained from American type culture collection (ATCC). Cells were cultured in IMDM, and RPMI1640 (1:4) supplemented with 10% fetal bovine serum and penicillin/streptomycin (100 U/mL) (Invitrogen, CA, USA). Cells were cultured in an incubator containing 5% CO2 at 37 °C. The medium was changed every 3 days and cells were subcultured once in confluence. miR-1290 mimic, miR-1290 mimic NC, miR-1290 inhibitor, miR-1290 inhibitor NC, and siRobo1 were each transfected into chordoma cells using Lipofectamine 2000 reagent (Invitrogen, CA, USA) according to the manufacturer’s instruction. After 48 h transfection, the cells were harvested for subsequent experimental studies.

The whole cell lysate from the U-CH1 cell line was extracted using a radioimmunoprecipitation assay (RIPA) buffer. Proteins were separated on 10% sodium dodecyl sulfate (SDS) polyacrylamide gels and transferred to polyvinylidene difluoride (PVDF) membranes. After blocking with 5% non-fat milk in tris-buffered saline-tween (TBST) for 1 h, the membranes were immersed with the primary antibody (anti-Robo1, 1/50 dilution, Abcam) at 4 °C overnight. Membranes were then washed and incubated with secondary antibodies at room temperature. GAPDH (1:1,000, Cell Signaling) was used as an internal loading control.

Cells lines transfected with the miR-1290 mimic, inhibitor, siRobo1 or control were plated in duplicate in a 6-well plate pre-treated with type I rat tail collagen (BD biotechnology). After incubation at 37 °C for 14 days, the colonies were stained with crystal Violet solution in methanol for 15 min.

After 48 h transfection, Transwell assay was used to evaluate cellular invasion. 2×105 U-CH1 cells were suspended in serum-free DMEM and then seeded into the upper chamber of each insert coated with Matrigel, while the lower chamber was filled with DMEM supplemented with 20% FBS. After 48 h of incubation, cells on the bottom side of the membrane were fixed with 4% polyoxymethylene for 15 minutes and stained with crystal violet dye for 5–10 minutes at 37 °C and finally visualized by using a light microscope (Carl Zeiss, Germany).

SPSS 16.0 software (Chicago, IL, USA) was used for statistical analyses. Numerical data were expressed as mean ± standard deviation. Comparisons of quantitative data between the two groups were performed using two-sided Student’s t-test, and the rates were compared using a Chi-square test. The statistical association between miR-1290 and Robo1 in chordoma tissue was evaluated with Spearman’s rank correlation test. A P value <0.05 was considered as significant, and a P value <0.01 was considered as highly significant.

The expression of miR-1290 and Robo1 in chordoma tissues 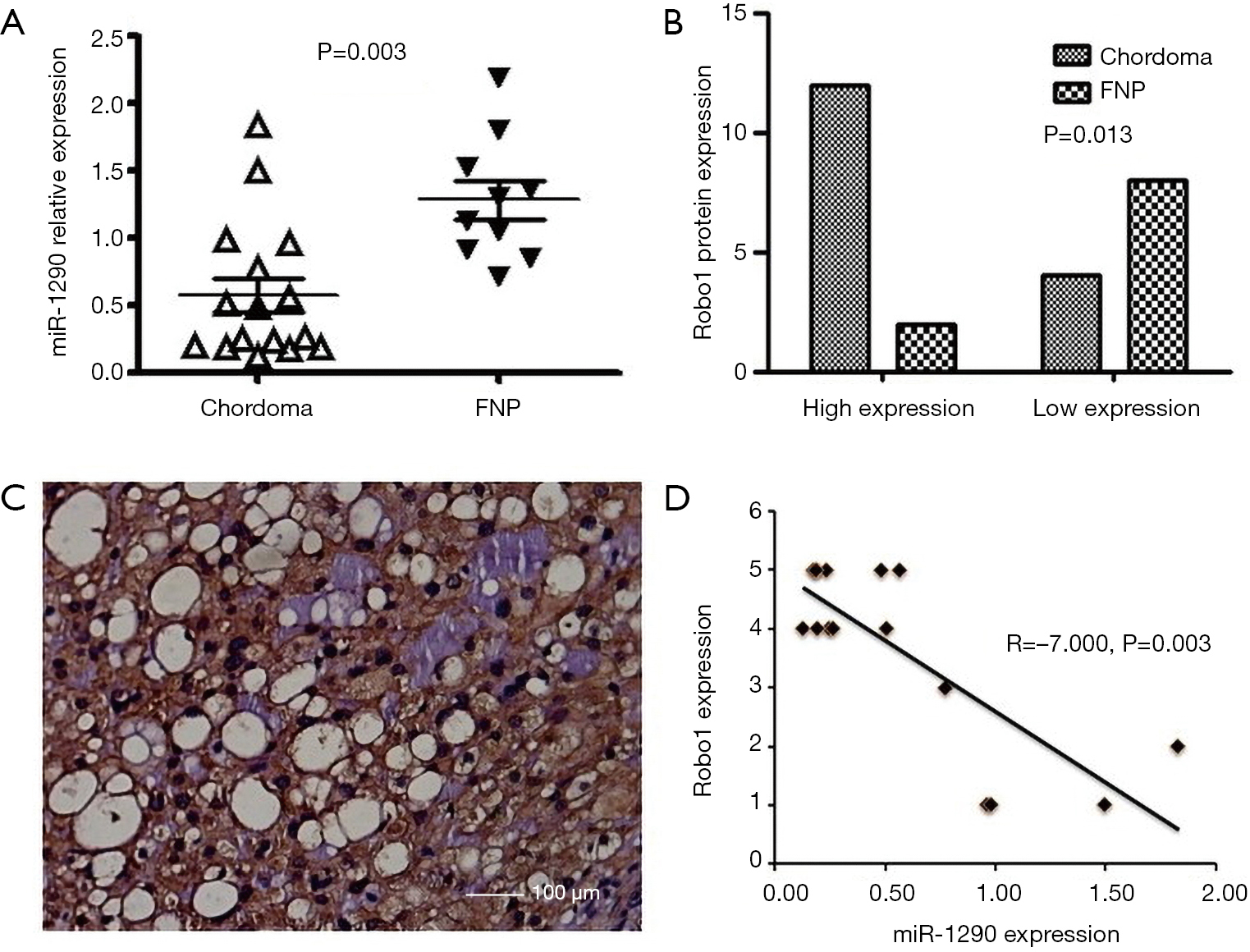 Validation of Robo1 as a direct target of miR-1290

Bioinformatics analysis was performed to understand further the mechanisms underlying the role of miR-1290 in chordoma. The target genes of miRNA-1290 were predicted by using the TargetScan, microRNAorg and PITA databases. Robo1 was identified as a likely target for miR-1290 because there was a complementarity relationship between miR-1290 and the Robo1 3′-UTR (Figure 5A). The results of the Western blot analysis showed that the expression of Robo1 was significantly increased in the miR-1290 inhibitor transfection group, while it decreased significantly in the miR-1290 mimic transfection group (Figure 5B,C). The dual luciferase reporter assay showed that upregulation of miR-1290 significantly reduced the firefly luciferase activity of Robo1-3′-UTR (P<0.05) (Figure 5D,E). 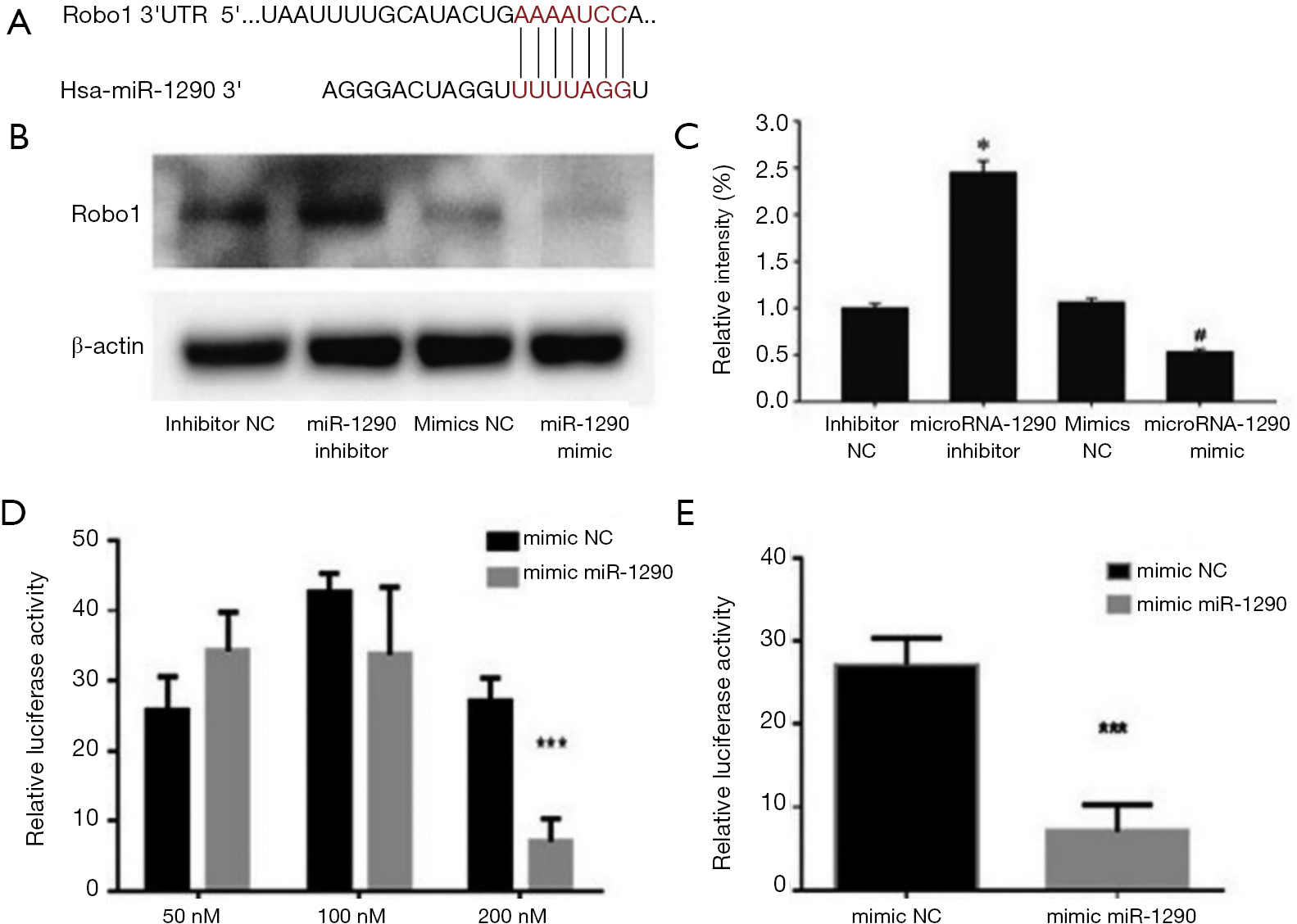 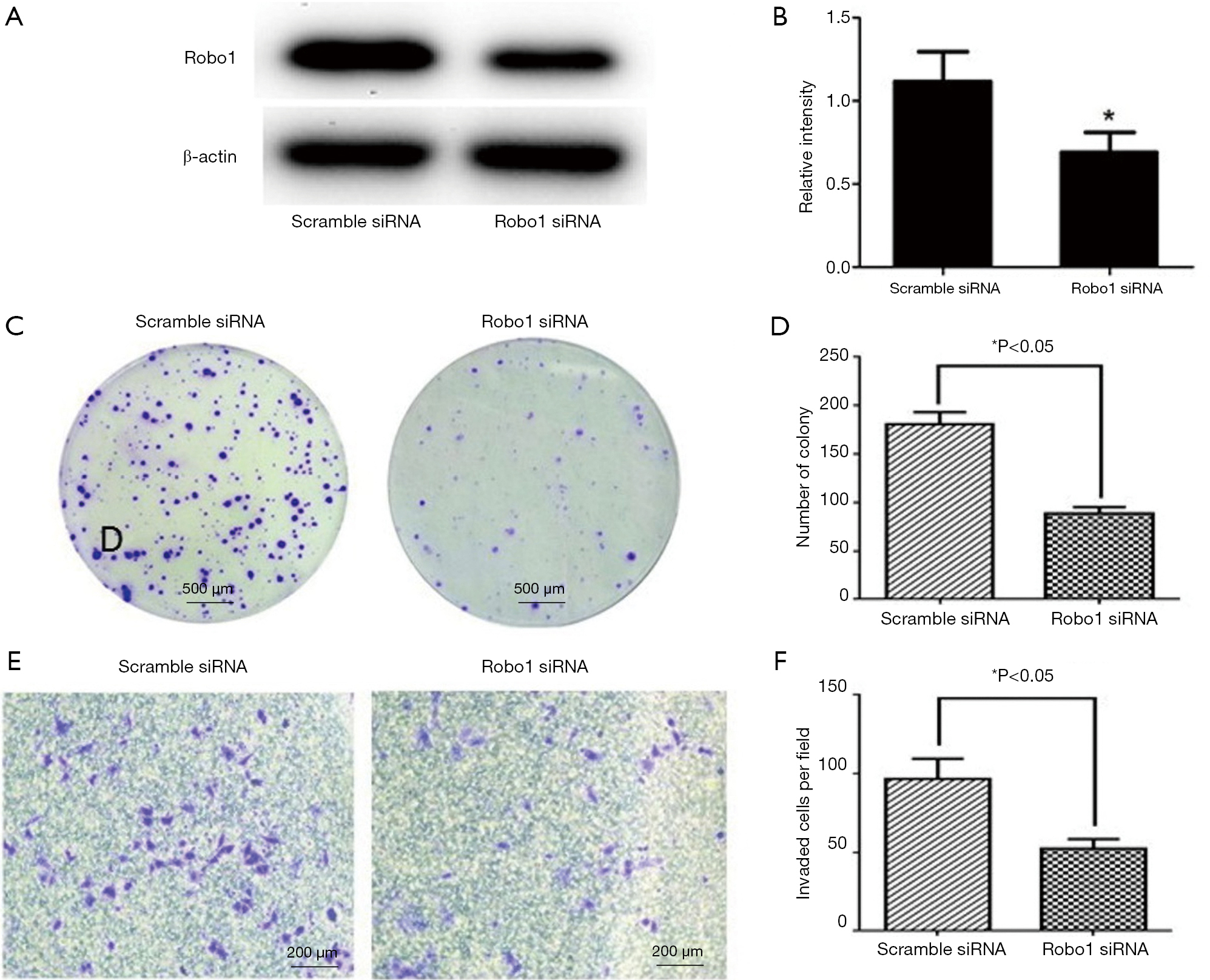 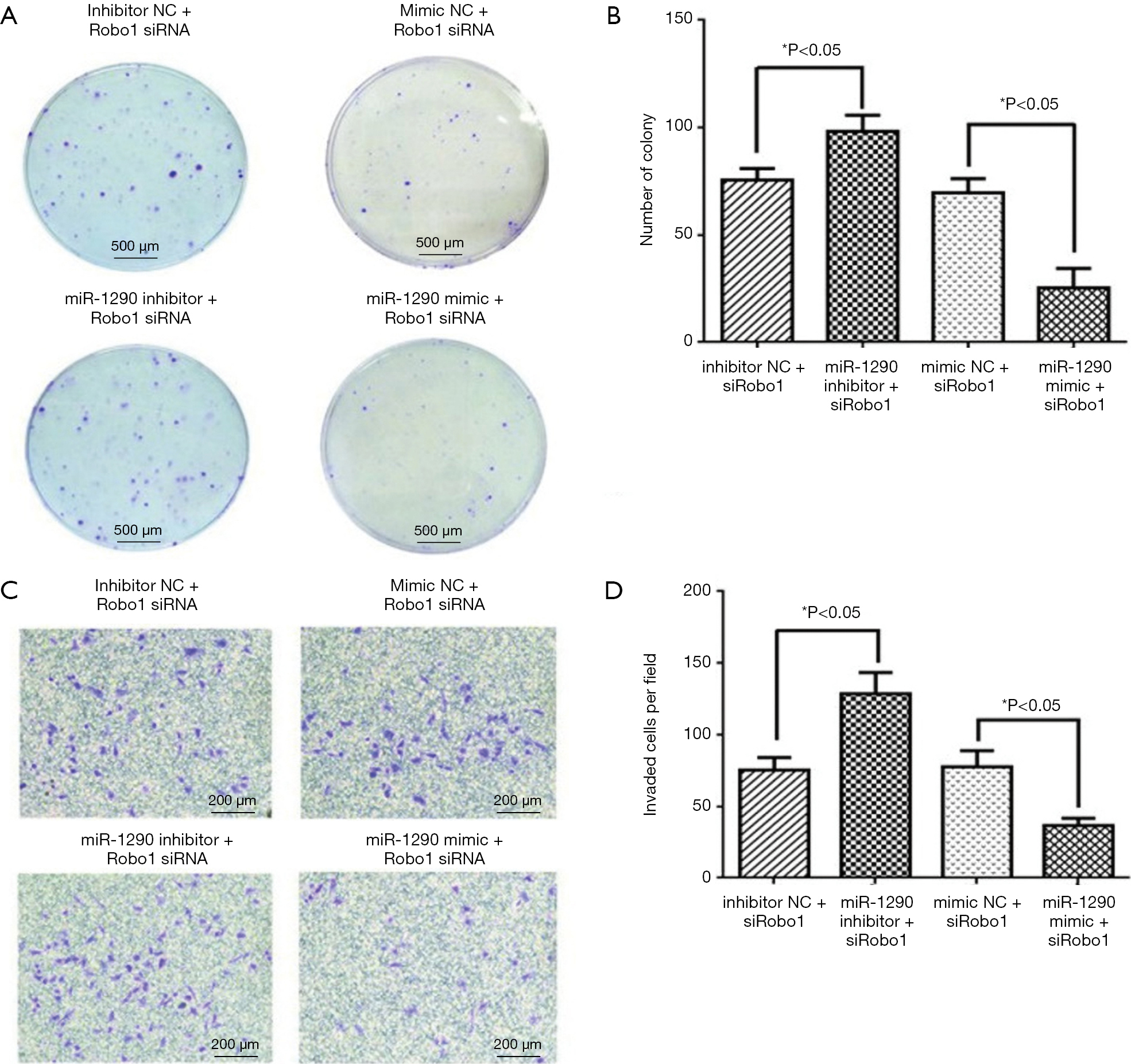 Chordomas are the fourth most common malignant neoplasms originating from bone (4). Although histologically low-grade, they are highly invasive and often recur locally (4). The gold standard for the treatment of chordoma is a radical en bloc resection with wide margins (1,4). Nevertheless, large en bloc resection is feasible for less than 50% of sacral chordomas and even fewer clival chordomas (18). Moreover, large en bloc resection may require extensive nerve and ligamentous excision leading to ambulatory, sexual, bowel and urinary incontinence (19). The overall 5- and 10-year survival rates following sacrectomy are 45–77% and 28–50% respectively (4).

Exploring detailed molecular mechanisms in chordoma progression and providing novel therapeutic targets are urgently needed. Recently, miR-1290 was reported to have a great role in tumor progression (12,20,21). Endo et al. reported that miR-1290 was down-regulated in ER high Ki67 low breast cancer and might be associated with its characteristics (12). Li et al. revealed that miR-1290 was elevated and may be correlated with cell proliferation and invasion in esophageal squamous cell carcinoma (14). Cancer stem cells-associated miR-1246 or miR-1290 are important in the invasion or metastasis of non-small cell lung cancer (22). Therefore, we can see that miR-1290 plays various roles in different kinds of cancers.

Our previous studies have shown that miR-1290 was down-regulated in chordoma tissues and might be negatively related to the prognosis of chordoma (15,16). However, the real underlying mechanisms are unclear. Therefore, we explored the specific functions of miR-1290 in chordoma in this study. After transfected with miR-1290 mimics, chordoma cell proliferation and invasion were both significantly inhibited, while the opposite effects were observed when transfected with miR-1290 inhibitor. These all indicate that miR-1290 might act as a tumor suppressor in chordoma.

To probe the mechanism by which miR-1290 influences chordoma cells, bioinformatics tools were used in our study. Robo1 was identified as a potential target gene of miR-1290. Accumulating evidence has shown that Robo1 can promote tumor angiogenesis and migration in many types of cancers (23-25). In our study, Robo1 expression was found to be up-regulated in chordoma by using IHC. We also observed that expression of Robo1 was negatively correlated with miR-1290 in chordoma tissue. Moreover, Robo1 expression was significantly increased when miR-1290 inhibitor was transfected into the U-CH1 cell line. Furthermore, by using luciferase reporter assay, we confirmed that Robo1 is a direct target of miR-1290 in chordoma cells.

Robo1 has been reported to be over-expressed in many cancers, and its dysregulation has great importance in tumor invasion and angiogenesis (24-26). Zhou et al. found that Robo1 and Slit2 were both overexpressed in colorectal epithelial carcinoma, and that knockdown of endogenous Robo1 could diminish tumor growth and liver metastasis (27). miR-218 elevation was discovered to inhibit cell invasion and migration by downregulating Robo1 in gastric cancer (28). Dontula et al. reported that miR-203 could inhibit migration of the glioma cells by disrupting the Robo1/ERK/MMP-9 signaling axis (29). Consistently, in the current study we found that downregulating miR-1290 could restore the inhibitory effect of Robo1 downregulation in chordoma cells. Meanwhile, elevating miR-1290 could facilitate the effect of Robo1 downregulation in chordoma cells.

In conclusion, we discovered that miR-1290 is a tumor suppressor in chordoma, and it can inhibit the chordoma cell’s proliferation and invasion by negatively regulating the direct target gene Robo1. Although the exact molecular mechanism remains to be further explored, our present study is the first to report how miR-1290 might inhibit chordoma progression by targeting Robo1, which provides new clues for guiding therapeutic intervention in chordoma.

Ethical Statement: All the patients or their families were informed, and supplied standard written consent. Our study protocol was approved by the Ethics Review Committee of the Institutional Review Board of the hospital (Approval ID: 185-1).