Circulating tumor DNA use in a community oncology practice

Comprehensive genomic profiling (CGP) is routinely incorporated into the treatment and management for patients with advanced solid tumors with guideline support from several organizations (1-3). Traditionally, CGP has been performed on tissue obtained from invasive biopsies in patients with advanced tumors. However, a tissue approach to CGP has its limitations including acquisition of tumor specimen, inability to profile cancer in real time, time to results, and time to treatment. A recent study in newly diagnosed advanced lung cancer treated in the community showed that despite recommendations for CGP, less than 8% of patients were tested for all the guideline recommended genes (4).

CGP utilizing cell-free circulating tumor DNA (ctDNA) has emerged as an alternative to tissue biopsy. ctDNA CGP has shown to have high concordance with tissue CGP, and patients with ctDNA detected therapeutically targetable alterations who are treated with targeted therapy have similar clinical outcomes as those treated based on tissue CGP results (5,6). Additionally, ctDNA CGP has been shown to overcome barriers associated with inter and intra tumor heterogeneity (7). There are currently more than twelve ctDNA assays available with variable supporting evidence in some types of advanced cancer. Two of the most widely used ctDNA assays in community oncology practices include Guardant360® and FoundationOne®Liquid. Both Guardant360 and FoundationOneLiquid have received Breakthrough Device (formerly Expedited Access Pathway program) designation by the Federal Drug Administration (FDA), with FDA approval still pending. Though the FDA has yet to approve either assay, both are widely used in oncology practice.

This retrospective single center study aimed to describe the clinical characteristics of patients with advanced solid tumors, defined as stage IIIB or higher, who underwent ctDNA analysis in a community oncology practice, to describe the prevalence of mutations identified and available therapeutic options according to the mutation, and to delineate the clinical action taken following the results of ctDNA analysis.

IRB approval was obtained for retrospective review of all patients seen at the Scripps Hillcrest Oncology Clinic (San Diego, California, USA) between September 2016 to March 2018 who had ctDNA assay testing performed as ordered by their primary oncologist. The ctDNA assay utilized was Guardant360 (8). This review comprises patient cases from three medical oncologists. CtDNA results were defined as “clinically actionable” if the identification of the mutation was associated with an FDA approved therapy, an off-label therapy, or a targeted therapy clinical trial. Mutations identified comprise four major classes of alterations, including single nucleotide variants, indels, amplifications, and gene fusions. Therapeutic action taken following ctDNA assay result was recorded in a binary fashion, either as treatment choice was influenced or not influenced based on ctDNA result. Patients with targetable mutations who were subsequently treated with an FDA approved therapy, clinical trial, or off-label treatment were categorized as patients whose treatment choice was influenced by ctDNA results. Patients with identified mutations by ctDNA assay though whom were subsequently treated with non-targeted therapy, immunotherapy, supportive care only, or died were categorized as patients whose treatment choice was not influenced by ctDNA results. 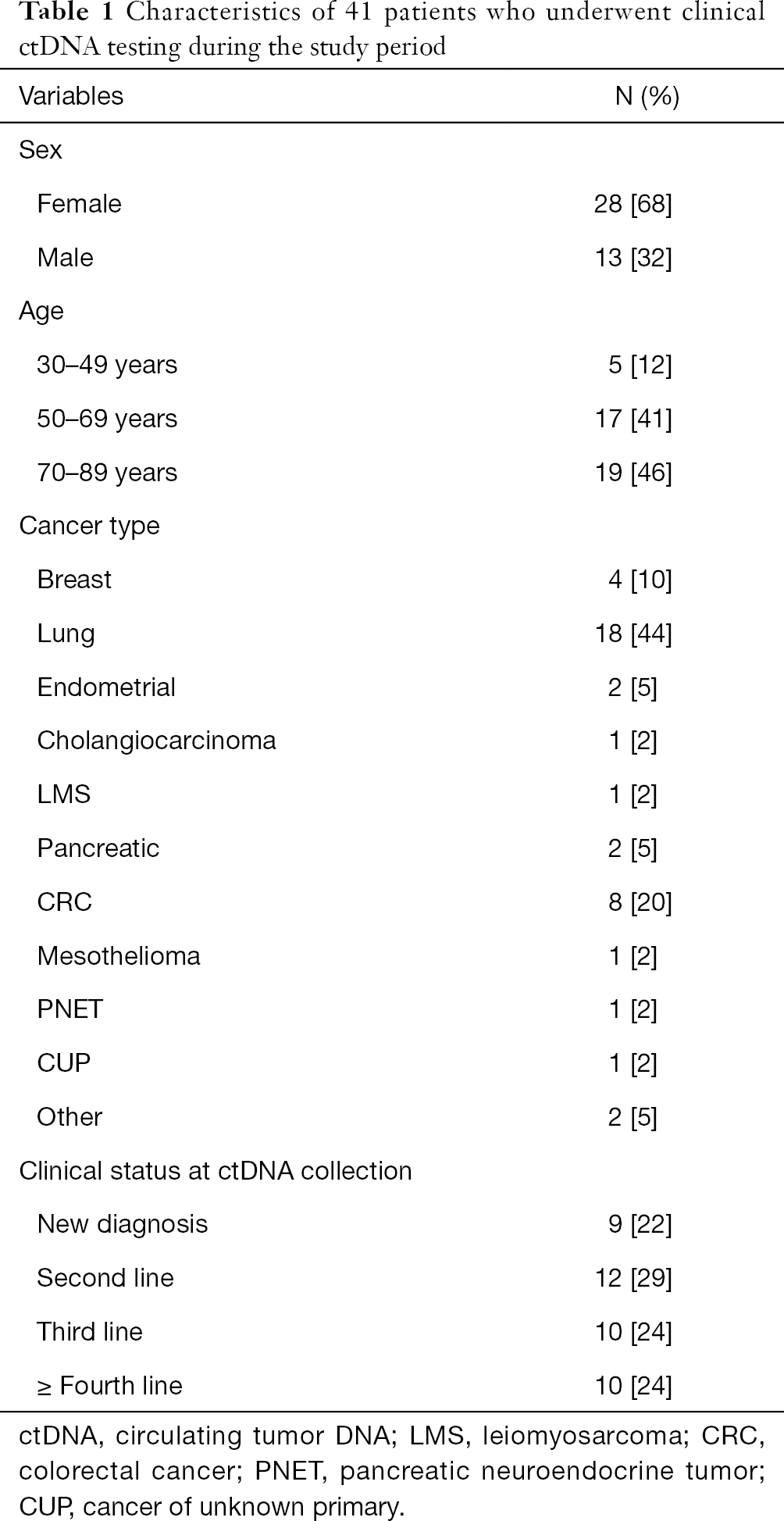 Median turn-around time for ctDNA results was nine days from sample collection to results report. Clinically actionable mutations were detected in 31 of the 41 patients (76%). In 3 patients (7%), ctDNA detected mutations were present but either were variants of uncertain significance or were not clinically actionable as defined in the study methods. No ctDNA alterations were detected in 7 patients (17%, Table 2). Of the 97 mutations identified across 34 patients’ circulating tumor DNA, 5 mutations are linked to FDA approved therapy, 46 with clinical trials, and 46 with off label therapeutic targeted agents (Table 3). Assay results influenced the treating physician’s treatment choice in 42% of the cases with identified mutations (Table 4). Two of 34 patients found to have tumor DNA mutations underwent treatment with FDA approved therapy, 5 went on to clinical trial based on the identified mutations, 2 received off-label treatment, 7 received immunotherapy, 9 received chemotherapy, and 9 did not receive further treatment. These 9 patients either proceeded to hospice, died, were lost to follow-up, or assay results were saved for future use following progression or intolerance to the current line of treatment (Table 5). 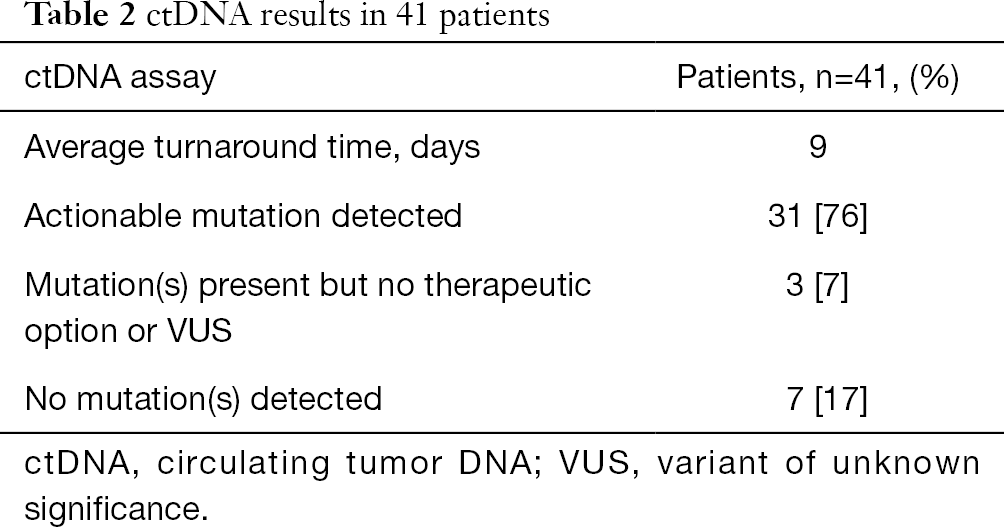 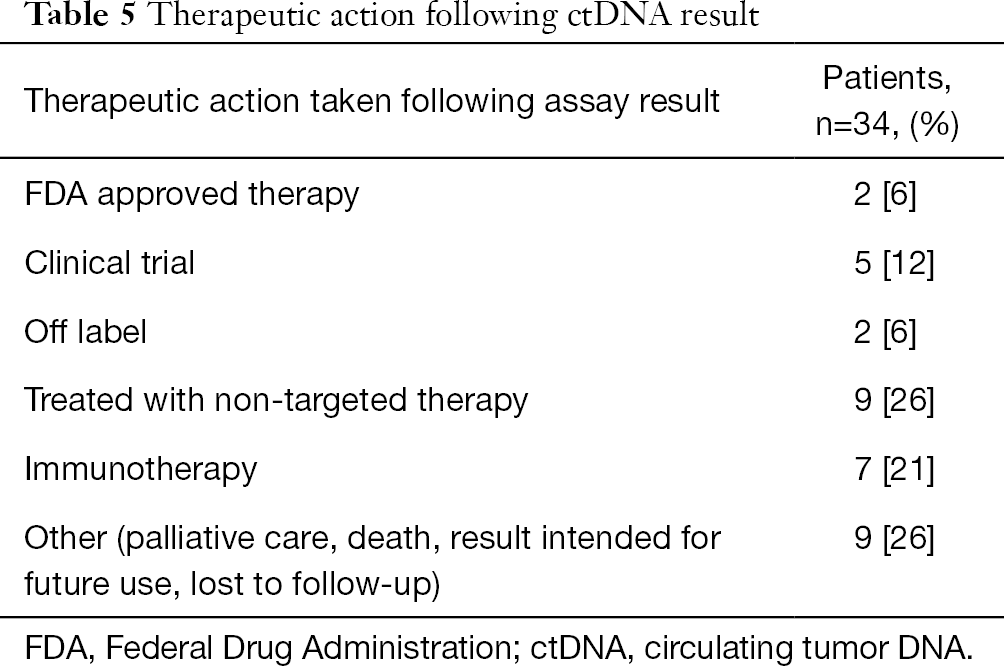 We practice in a unique time in the field of oncology. Knowledge surrounding genetic alterations has increased and tumor genomic sequencing has become more common in standard practice. Mutational analyses performed in advanced solid tumors confer prognostic and therapeutic information in many cases. Liquid biopsies offer a less invasive means of obtaining tumor genomic information, yet, the current use of ctDNA varies widely. This retrospective review describes its use in one community oncology practice.

In this cohort, all ctDNA testing was performed in patients with advanced solid tumors to aid in therapeutic decision making with wide variety in both the type of advanced solid tumor, as well as the line of therapy. Of the assays performed in the 41 patients included in this review, all 41 assays were performed in effort to aid therapeutic decision making in patients with advanced solid tumors. No assay was performed for treatment monitoring, cancer screening, or residual disease detection. Accordingly, 42% of therapeutic actions following ctDNA assay results were influenced by the ctDNA result, including placement on FDA approved therapy, clinical trial, and off label-targeted options. In addition, mutational results guided clinicians away from futile or harmful treatments, such as EGFR inhibition in colorectal patients with discovered KRAS mutations.

Despite the intention to gain prognostic and or therapeutic information from these assays, no further information was gathered in one quarter of patients for which ctDNA was drawn. Furthermore, of those patients with discovered mutations, therapeutic action was not influenced by findings from ctDNA analysis in 58% of cases. Rather, these patients proceeded with chemotherapy, immunotherapy, hospice, or died, further highlighting the conundrum that having additional information regarding an individual’s tumor biology does not yet translate into meaningful targeted therapy in the majority of cases. One explanation may be related to the lack of clinical and safety data regarding the use of targeted therapies in the off-label setting. This is currently being investigated in multiple clinical trials such as the NCI-MATCH (NCT02465060) and TAPUR (NCT02693535) which seek to treat patients with therapies targeted to the genomic changes found by genomic sequencing. Such use of off-label treatment, especially combination treatments never previously tested, is both controversial outside of the context of a clinical-trial and may explain the high percentage of patients found in this series who went on to chemotherapy or immunotherapy rather than targeted treatment despite the discovery of tumor mutations with potential off-label treatment options by ctDNA analysis.

This study was performed retrospectively at a single community oncology practice site and this limits generalizability to community practice sites at large. In one of the first series to describe ctDNA utilization by community oncologists, we demonstrate that utilization of ctDNA in this single community center series identified clinically actionable mutations in 76% of the overall cohort, leading to a therapy change based on ctDNA results in 42% of patients. The ability of ctDNA to detect therapeutically actionable information in a rapid turn-around time has significant clinical implications for the community oncology practitioner. No therapy change was initiated for 58% of patients, including those with on-label findings. The increasing use of targeted therapy offers both clinicians and patients optimism for improvements treatment responses and treatment-related toxicities by the way of individualized cancer treatment. This study demonstrates many patients in the community setting already receive targeted treatment in accordance with the patient’s tumor genomics. While this study addresses the utilization of ctDNA by community oncologists, it does not address patient-specific treatment outcomes following the use of targeted therapy. Further studies are needed regarding both ctDNA utilization as well as treatment outcome to help guide community oncologists who will continue to face the choice between targeted therapy, immunotherapy, and cytotoxic chemotherapy as science advances.

Conflicts of Interest: VM Raymond, MS, full time employee and shareholder of Guardant Health, Inc. The other authors have no conflicts of interest to declare.