Chronic myeloid leukemia (CML) is a hematological malignancy characterized by the t(9;22) chromosomal translocation that results in the formation of the BCR-ABL1 fusion gene (1). The oncogene BCR-ABL1 produces the p210 fusion protein, which has tyrosine kinase activity (2). CML has two clinical phases: chronic phase (CP) is characterized by the expansion of myeloid progenitor cells with apparently normal differentiation and eventually followed by progression to acute leukemia called the blast phase (BP) (3). Although tyrosine kinase inhibitors (TKIs) have profoundly improved patient prognosis, the treatment of the BP is still difficult. The mechanism of progression to the BP is unclear.

The Warburg effect indicates that most tumor cells utilize glycolysis to proliferate (4,5). A previous study showed that in CML patients, TKI resistance was related to glycolysis. Zhu et al. found that PFKFB3, which controls the limiting step of glycolysis, is strongly associated with TKI resistance (6). In imatinib-resistant CML cells, the induction of HIF-1α expression at both the mRNA and protein levels is observed under normoxic conditions. The expression of target genes such as VEGFA, PGK1, and PKM2 is also elevated (7). Our previous study indicated that ATP generation by glycolysis is the main energy source in leukemia cells. BP cells had a high glycolytic status. We also found that fumarate expression is increased in CML-BP (8). There are two reasons for fumarate accumulation in cancer cells: biochemical inhibition and FH expression knockdown mediated by siRNA (9,10). Therefore, the fumarate accumulation in CML-BP may be because of the low activity of FH. We hypothesized that FH inhibition promotes CML progression by increasing glycolysis.

CML blast crisis is considered to be the consequence of alterations in DNA (11). However, the mechanism by which these alterations occur is less well understood. The high levels of ROS in CML cells increase DNA damage and the frequency of genetic mutations, and the DNA damage repair process is unfaithful. This repair is characterized by high frequency with large knockdowns and eventually results in disease progression (12-14). FH plays a key role in DNA damage repair. DNA damage induces FH to translocate into the nucleus and produce fumarate. The phosphorylation of the histone H2AX is one of the earliest responses to DNA double-strand breaks (DSBs), and the phosphorylation of CHK2 should be activated upon DSB induction. In the absence of FH, the phosphorylation of histone H2AX is impaired. The phosphorylation of CHK2 in FH-deficient cells is also much lower than that in control cells. Thus, FH deficiency may influence the recognition of and recovery from DNA damage (15).

In this study, we showed that FH expression was low in CML blast crisis samples. Knocking down FH expression induced glycolysis and enhanced the invasiveness of K562 cells. In addition, FH also influenced the sensitivity to DNA damage in K562 cells. Our findings revealed a new pathway of CML progression and may provide a novel approach for the treatment of CML-BP.

Total RNA was isolated using TRIzol (Invitrogen). The RNA isolation was performed according to the manufacturer’s protocols. Reverse transcription of the RNA was performed using an M-MLV Reverse transcription kit (Takara). Real-time qPCR was performed using SYBR Premix Ex Taq (Takara) with a Step One Plus real-time PCR system (Life Technology). The results were analyzed using Expression Suite software (Life Technology) and StepOne 2.3 software. All data were normalized using endogenous β-actin as the control, and the 2−ΔΔCt method was used to calculate the relative gene expression. Primers were purchased from Invitrogen and are listed in Table 1. 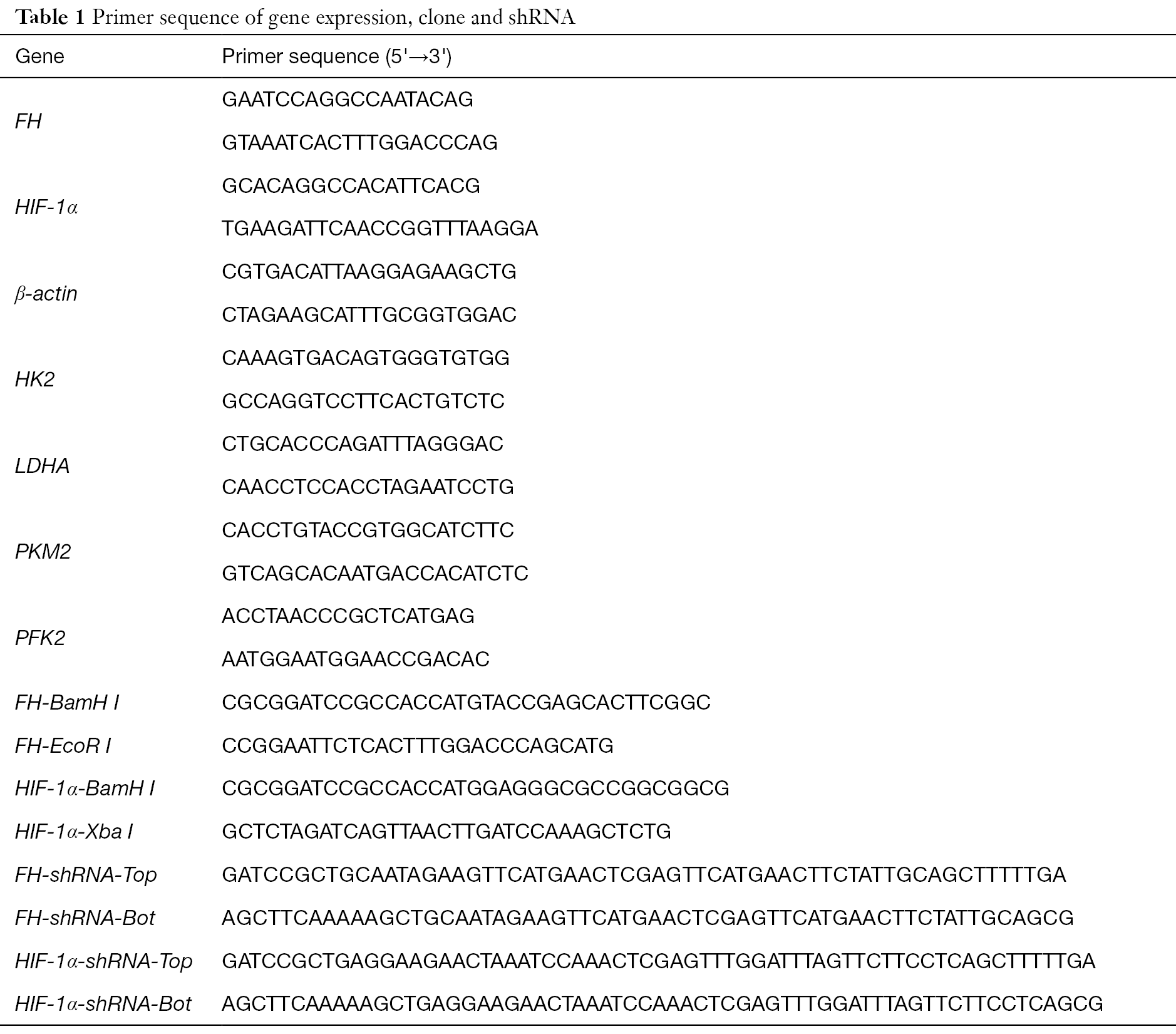 The cellular protein content was extracted by RIPA buffer with a protease inhibitor cocktail. Lysates were spun at 16,000 g and 4 °C for 30 min and normalized by protein concentration. The lysates were separated by SDS-PAGE and electrotransferred to nitrocellulose membranes (Invitrogen). The membranes were blocked in PBS containing 0.1% (vol/vol) Tween-20 (PBS-T) and 4% (wt/vol) nonfat dry milk (Bio-Rad) for 1 h on a shaker at room temperature. Primary antibodies were added (anti-Fumarase/FH mouse monoclonal antibody, anti-HIF-1α mouse monoclonal antibody, anti-HK2, anti-PKM2, anti-PFK2, anti-LDHA, anti-β-actin, anti-p-H2AX and anti-p-Chk2 antibodies) (EnoGene, USA) and incubated overnight on a rocker at 4 °C. Secondary antibodies were diluted 1:2,000 in blocking buffer and incubated for one hour at room temperature. Images were acquired using LabWorksTM (UVP, USA).

After the cells grew to a density of 5×106/mL, the cell culture medium was absorbed and discarded, and the cultured cells were collected and washed with PBS. When the activities of HK2 and PFK2 were measured, 400 µL of extracting solution was added per every 2×106 cells, while when LDHA and PKM2 activities were measured, 500 µL of PBS was added. After the cells were lysed with ultrasonic sonication and centrifuged at 8,000 ×g for 10 min at 4 °C, the supernatant was collected. The protein content was measured using a BCA kit (Pierce) following the manufacturer’s instructions. Enzyme activity was measured by colorimetry following the manufacturer’s instructions.

Hu was added to K562 cells in 6-well plates. Then, the cells were incubated at 37 °C for 30 min with 500 µL of 10 µmol/L DCFH-DA probe (Beyotime Institute of Biotechnology, Shanghai, China), with shaking every 5 min. The cells were then washed with PBS (three times, 5 min each) to remove any remaining extracellular DCFH-DA probe. The fluorescence intensity, which represents the cellular ROS levels, was detected by ﬂow cytometry (BD Biosciences).

We designed and synthesized shRNAs specific for FH and HIF-1α based on Ambion’s software (Table 1). An FH-shRNA cell line (pSilencer2.1-U6/shR-FH) and HIF-1α-shRNA cell line (pSilencer2.1-U6/shR-HIF-1α) were constructed by lipofectin-mediated gene transfer. PCR was used to amplify fragments containing FH and HIF-1α. The primers were FH-BamHI, FH-EcoRI, HIF-1α-BamHI and HIF-1α-XbaI (Table 1). The BamHI, EcoRI and XbaI sites were cut off, and the fragments were connected to the pcDNA 3.1 plasmid (EnoGene, USA) by a ligase (T4 DNA ligase, Promega, the United States). The overexpression model was obtained by Lipofectamine 2000 Reagent (Invitrogen) transfection, limiting dilution cloning and cell proliferation.

For apoptosis staining, 10 µL of Annexin-V-R-PE (ApoScreen Annexin V Apoptosis Kit, Southern Biotech, USA) was added to 5×105 cells after the last wash and incubated for 20 min in the dark in an ice bath. The samples were washed once, and 380 µL of 1× binding buffer and 2 µL of 7-aminoactinomycin D (7AAD) (eBioscience) were added within 4 h before FACS analysis. For proliferation detection, 0.5–1 mL of PI (100 mg/L) (Propidium iodide, Roche, Switzerland) was added to each sample, fully mixed and incubated at room temperature for 30 min in the dark. FACS analysis was performed immediately using a ﬂow cytometer (BD Biosciences). 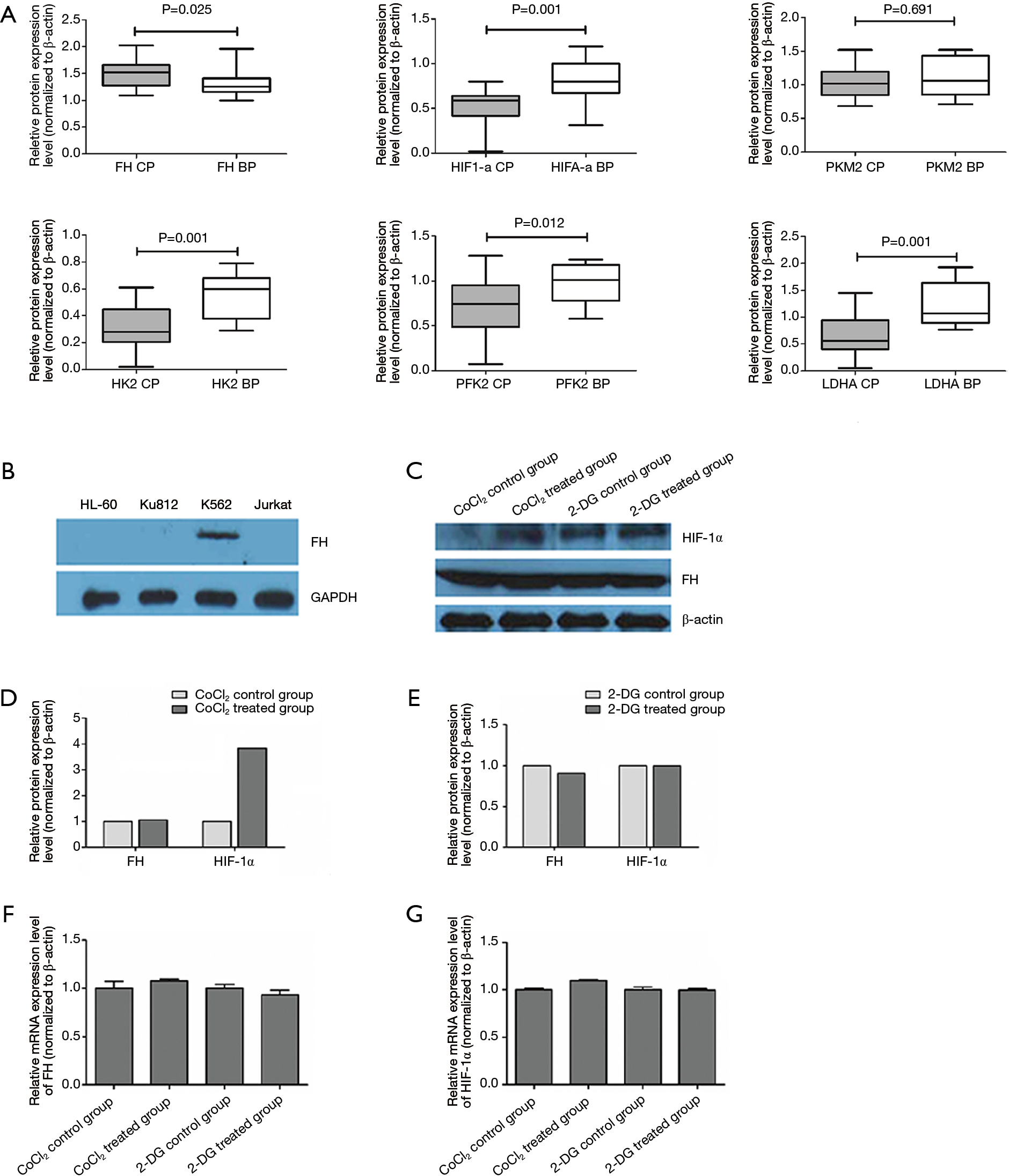 Western blot was used to test the expression of FH in four human leukemia cell lines: HL-60, K562, KU812, and Jurkat. Among these cell lines, only the K562 cell line, which was derived from a CML patient in blast crisis, exhibited FH expression (Figure 1B). CoCl2 was used to induce glycolysis, and 2-DG was used to block glycolysis in K562 cells. We detected the mRNA and protein expression of FH and HIF-1α after treatment with CoCl2 or 2-DG. There was no significant difference in FH expression before and after induction (Figure 1C,D,E,F). CoCl2 stimulated the development of a hypoxic environment and increased the protein expression of HIF-1α (Figure 1C,D). The HIF-1α mRNA transcript was expressed constitutively in K562 cells under both normal and hypoxic conditions, and this expression was not induced by CoCl2 (Figure 1G). 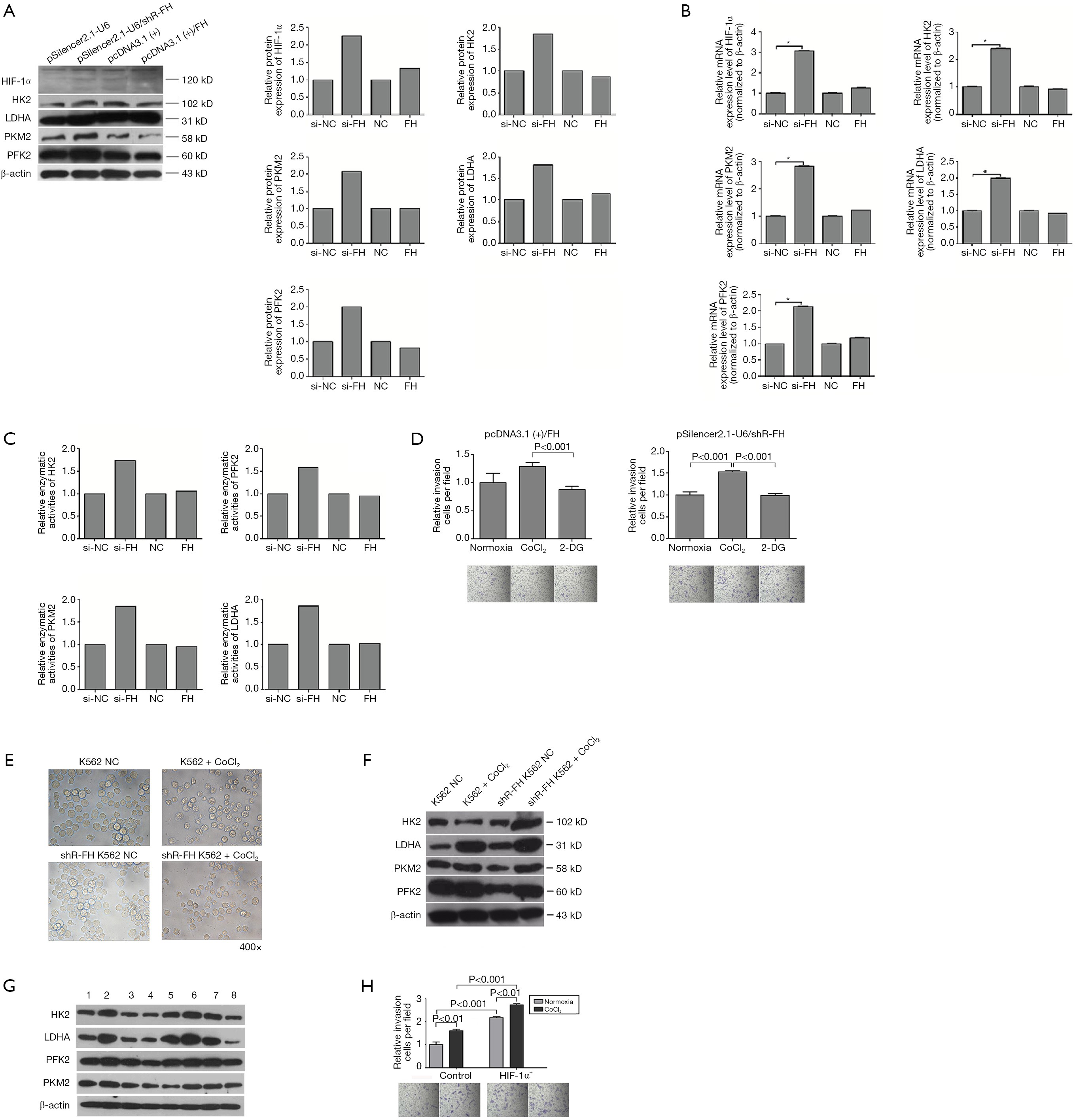 Hu (1 mmol/L) was used to induce DNA damage. Over time, the mRNA and protein expression of FH increased (Figure 2). At the same time, FH translocated to the nucleus, and this movement was reflected in the decreased cytoplasmic FH protein level and increased nuclear FH protein level (Figure 2B,C). Intracellular ROS levels were also measured by flow cytometry. The ROS levels first increased and then decreased, increasing to a maximum at 1 h (Figure 2E). 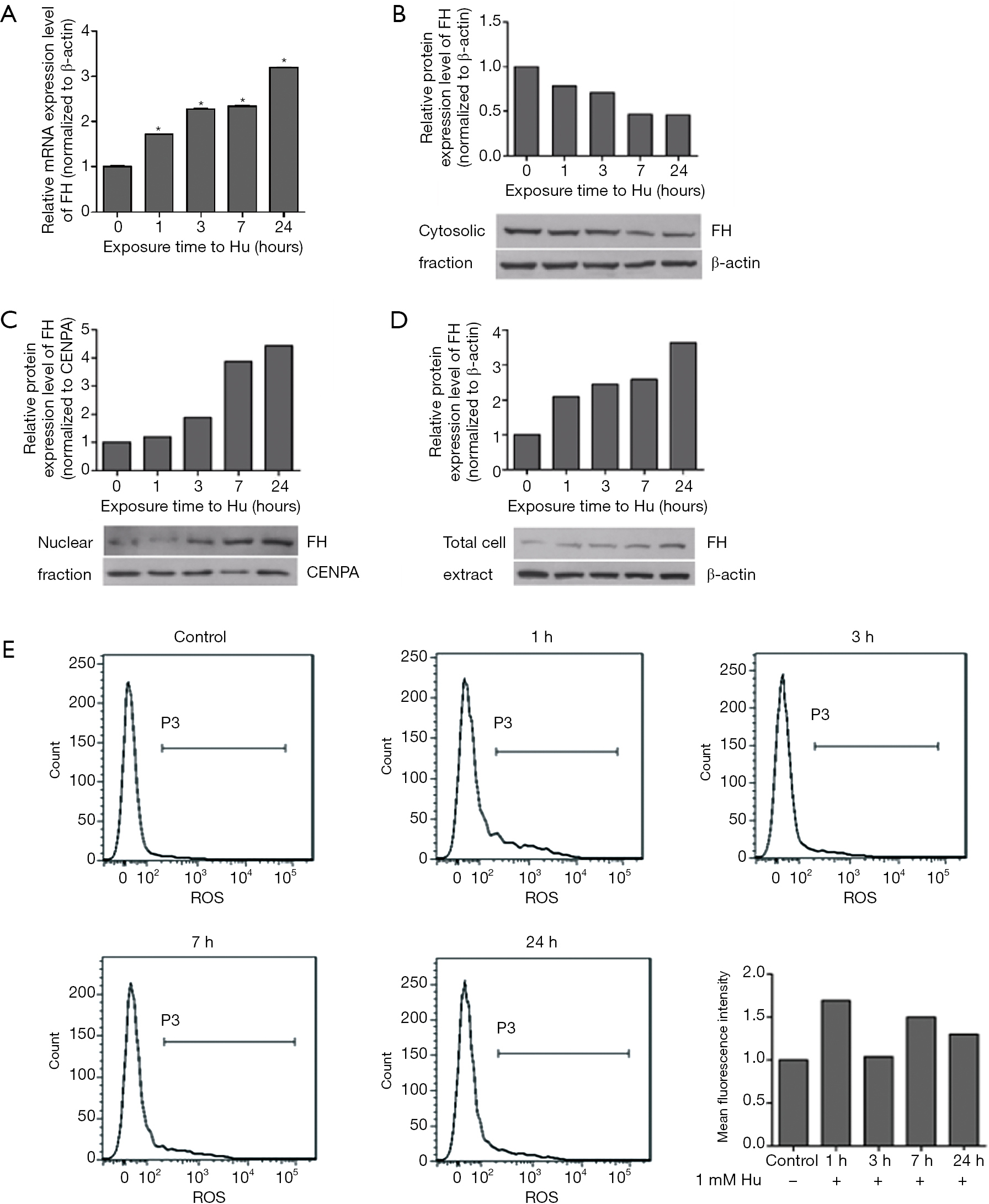 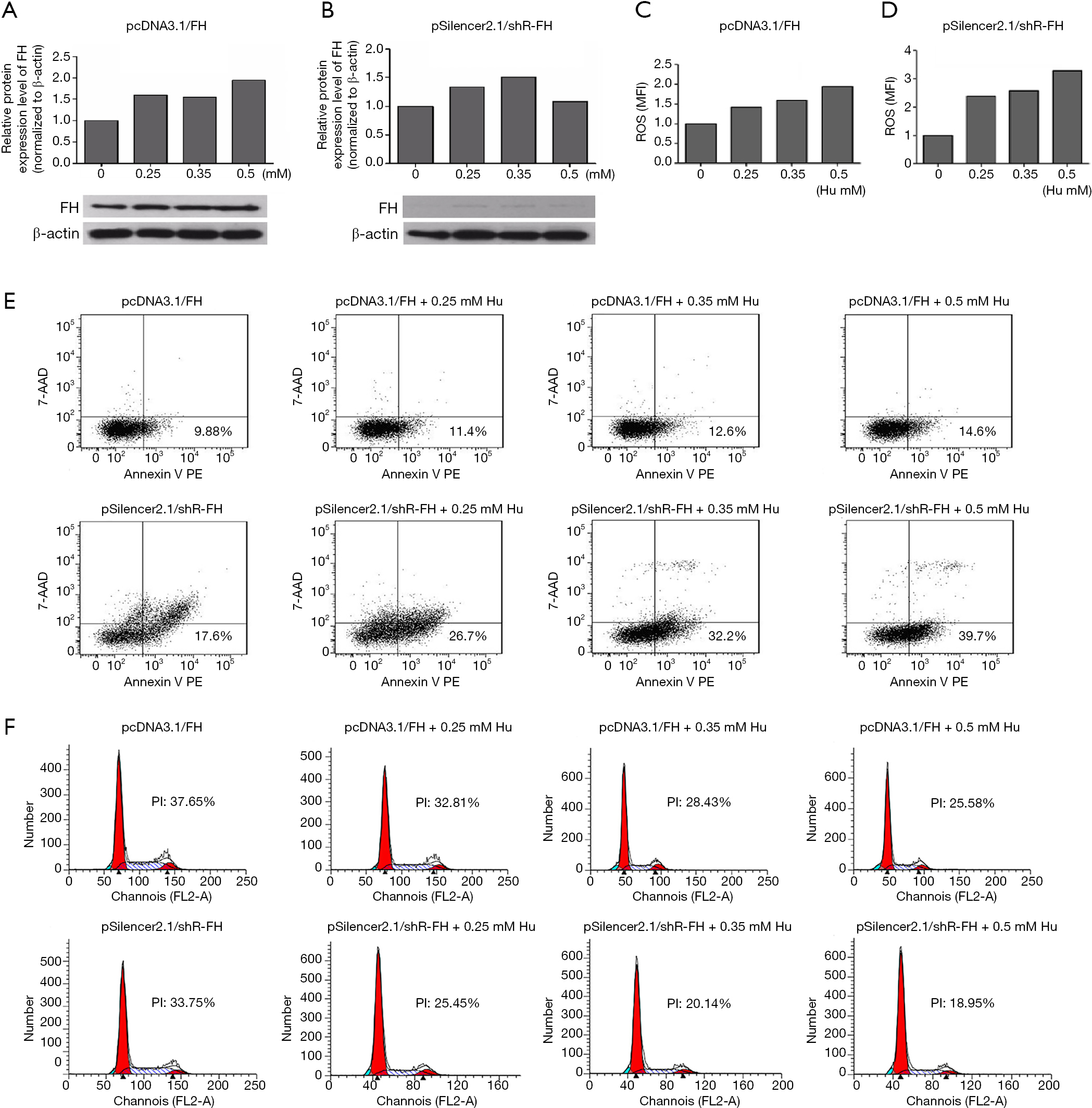 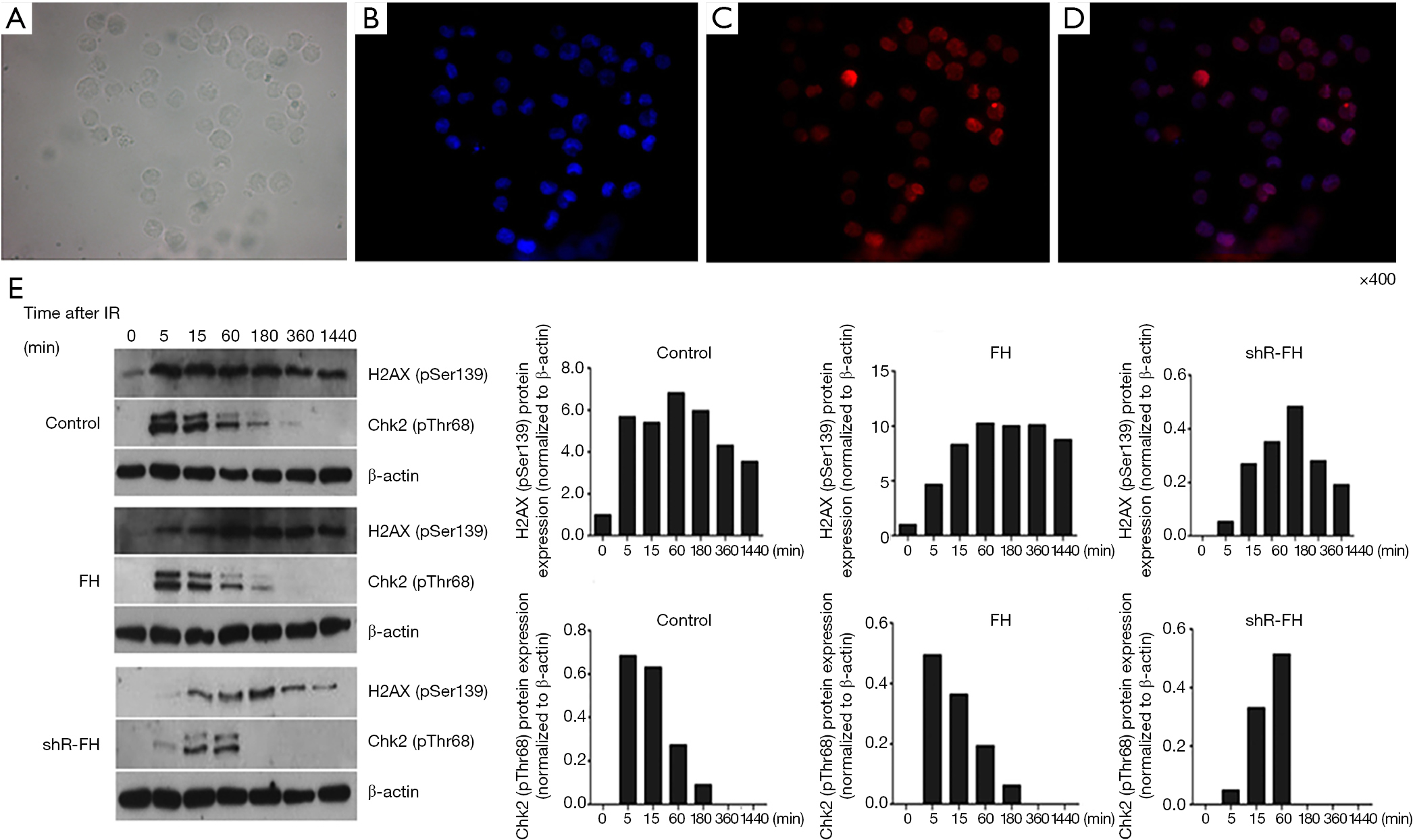 Fumarate hydratase (FH) is a TCA enzyme that catalyzes the reversible hydration of fumarate to malate. It has been reported that FH loss and fumarate accumulation are related to the aggressive features of hereditary leiomyomatosis and renal cell carcinoma (HLRCC) (16). Fumarate is one of the analogues of 2-oxoglutarate, and it can competitively inhibit several 2-oxoglutarate-dependent dioxygenases (2-OGDDs), including HIF prolyl hydroxylases (PHDs) and ten-eleven-translocation 5-methylcytosine dioxygenases (TETs) (17). It has been identified that the stabilization of the hypoxia-inducible factor HIF-1α in HLRCC is because of the inhibition of PHDs (18). HIF-1α stabilization increases the transcription of its target genes GLUT1 and VEGF, which can promote the vascularization and glucose transport needed for tumor growth (19).

Genomic instability is believed to be responsible for CML blast crisis. The high levels of ROS created in BCR-ABL cells cause chronic oxidative DNA damage and result in DNA DSBs. DSBs are the main DNA damage in CML cells, and the main mechanism to repair the damage is the alternative nonhomologous end-joining pathway (ALT NHEJ). Although BCR-ABL enhances repair activity, the repair of DSBs in Ph+ CML cells is unfaithful (12). The NHEJ repair pathway is DNA-dependent protein kinase (DNA-PK) dependent in mammalian cells. However, in BCR-ABL cells, the activity of the DNA PK-dependent NHEJ pathway is decreased, and the activity of the ALT NHEJ pathway, which is an error-prone repair process characterized by a high frequency of large deletions, is increased. The decreased activity of the DNA PK-dependent NHEJ pathway may be due to the elevated ROS levels. High levels of the ALT NHEJ repair-related enzymes DNA ligase IIIα and poly-(ADP-ribose) polymerase 1 (PARP1) are the main evidence (13,14,20).

We used 1 mmol/L Hu to induce DNA damage in K562 cells and found that FH expression was increased and cytoplasmic FH moved into the nucleus. The ROS level first increased and then decreased, which may indicate that following the increase in FH expression, DNA damage repair was underway. However, with FH expression knockdown, the ROS level was increased obviously and did not exhibit a downward trend. The phosphorylation of H2AX is the earliest response to DSBs. In FH expression-knockdown K562 cells, the peak levels of phosphorylated H2AX and the cell cycle checkpoint Chk2 occurred later than in the control cells. These results indicated that FH expression knockdown may influence the recognition and recovery from DNA damage.

In conclusion, our results showed that a functional deficiency in FH may induce the Warburg effect through the HIF-1α pathway and lead to CML blast crisis. FH deficiency also influenced DNA damage repair in K562 cells. Therefore, our ﬁndings revealed a novel pathway of CML progression, and HIF-1α may be a powerful target for future clinical use in CML-BP.

Ethical Statement: This study was approved by the institutional review board of the First Affiliated Hospital of Nanjing Medical University (IRB number: 2011-SRFA-033). Informed consent was obtained from all individual participants included in the study.