Somatic mutation of the epidermal growth factor receptor (EGFR) gene is a major oncogenic driver in non-small cell lung cancer (NSCLC) (1). Patients with advanced NSCLC harboring EGFR mutation can receive EGFR-tyrosine kinase inhibitors (TKIs) such as gefitinib, erlotinib, and afatinib with high response rates for first-line treatment (2). However, acquired resistance to EGFR-TKIs in metastatic setting is inevitable, although initial responses are dramatic. In addition, ~20–30% of patients have no good initial clinical response to EGFR-TKIs, although they harbor sensitizing EGFR mutations (3). These primary resistant mechanisms can be explained by de novo resistant mutation, suboptimal drug exposure, failure of apoptosis induction, and other somatic alterations on genes encoding components of major signaling pathways (4). After tumor progression, novel third-generation EGFR-TKIs such as osimertinib and olmutinib have been designed to overcome resistance due to T790M mutation (5,6). Other strategies to overcome different mechanisms are also under development (7,8).

Although EGFR mutations are known to be commonly detected in never or light smokers (9), more than 30% of patients with EGFR mutations are currently smoking at the time of diagnosis according to Japanese data (10). Additionally, Kim et al. (11) have shown that about 40% of ever smokers with EGFR mutant adenocarcinoma have smoking histories of more than 30 pack-years. These smoking histories are independently associated with poor response to EGFR-TKIs in terms of progression-free survival in patients with activating EGFR mutations (10-13). Poor clinical outcomes are mainly due to cross-talks between nicotine-induced nicotinic acetylcholine receptor (nAChR) and EGFR pathway, Src activation, and epithelial mesenchymal transition (EMT) both in vitro and in vivo (14-16).

Recently, immunotherapies based on blocking of immunosuppressive checkpoints have been established as major treatment paradigms for the management of NSCLC. Programmed cell death-1 protein receptor (PD-1) and ligand (PD-L1) pathway is involved in suppressing autoimmunity during T-cell activation, allowing for immune tolerance of PD-L1 expressed cells (17). Multiple solid tumors can adapt these mechanisms and overexpress PD-L1, thereby avoiding immunologic surveillance and promoting cancer growth (17). Given the mechanism of action of anti-PD-1/PD-L1 antibodies, favorable responses have been observed in patients whose tumors express PD-L1 (18,19). Smoking history also has clinical significance for patients with PD-1/PD-L1 blockade (20,21) which is influenced by specific molecular determinants, including somatic mutational burden and genomic instability (22). However, in real practice, activating EGFR mutation is associated with poor clinical response to anti-PD-1/PD-L1 therapy (23). This is explained by low tumoral PD-L1 expression and CD8+ tumor-infiltrating lymphocytes within the tumor microenvironment (24).

Immunotherapies are not routinely considered for the management of patients with activating EGFR mutations (25). Nevertheless, when we consider a plurality of smokers in these population and favorable effect of smoking history on response to checkpoint inhibitors, the biologic influence of nicotine needs to be investigated clinically. Thus, the aim of the present study was to determine the effect of nicotine exposure on PD-L1 expression in EGFR mutant lung cancer cells. Moreover, sensitivity of these cells to EGFR-TKIs and biologic changes regarding EGFR-related pathways upon nicotine exposure were also evaluated.

Gefitinib was purchased from Cell Signaling Technology (Beverly, MA, USA). It was dissolved in DMSO to obtain a stock solution at 100 mM. The final concentration of DMSO in all conditioned media did not exceed 0.1%. Antibodies specific for EGFR, mTOR, AKT, PD-L1, α1-nAchR, β-actin, and horseradish peroxidase-conjugated secondary antibodies were purchased from Cell Signaling Technology (Beverly, MA, USA). Nicotinic acetyl-choline receptor α1 subunit (α1-nAchR) was obtained from Abcam (Cambridge, United Kingdom). To evaluate the influence of gefitinib on EGFR related signaling pathway, cells were stimulated with gefitinib for 48 hrs.

Cells were seeded into 6-well plate at density of 3×105 cells/well. Following 24 hrs of incubation in room air, cells were treated with gefitinib (0, 0.1, or 1 µM) for 48 hrs. They were then stained with Wright and Giemsa. Morphological changes were observed under a phase contrast inverted microscope (original magnification: 200×).

Cell viability assay was performed based on the conversion of MTT [3-(4,5-dimethythiazol-2-yl)-2,5-diphenyltetrazolium bromide] to formazan via mitochondrial oxidation. Briefly, 1×104 cells were cultured in 96-well plates (200 µL medium/well). Cells were then treated with gefitinib (0, 0.01, 0.1, 1, 10, and 50 µM) for 48 hrs. MTT solution was added to each well of the plate and incubated in room air for 4 hrs at 37 °C. Formazan crystals were dissolved in acidified and OD value was measured at wavelength of 562 nm.

Cells were treated with 0.1 µM gefitinib for 48 hrs. Immunofluorescence staining was then performed according to the manufacturer’s protocol. Briefly, cells were washed with cold PBS, fixed with 4% paraformaldehyde, blocked with blocking buffer (PBS plus 0.1% Tween-20 and 3% goat serum), and incubated with primary antibodies (phospho-EGFR or PD-L1) at 4 °C overnight. After washing with PBS, cells were incubated with fluorochrome-conjugated secondary antibodies (Alexa Fluor 488 anti-rabbit IgG) for 1 hour at room temperature. Cell nuclei were stained with 4′,6-diamidino-2-phenylindole (DAPI) and then microscopy was performed using by LSM800 w/Airyscan confocal laser scanning microscope (Carl Zeiss, Germany).

The differences in the levels of cell viability between the two study groups in the presence of individual doses of gefitinib were compared using the Mann-Whitney test. The Fisher exact test was applied to compare the high PD-L1 TPS status (≥50%) among different burdens of smoking dosage. The cell viability levels were summarized using means and standard errors (SEM), and a P value <0.05 was used to define statistical significance. All analyses were performed using Graph-Pad Prism version 5.00 for Windows (GraphPad Software, CA, USA). 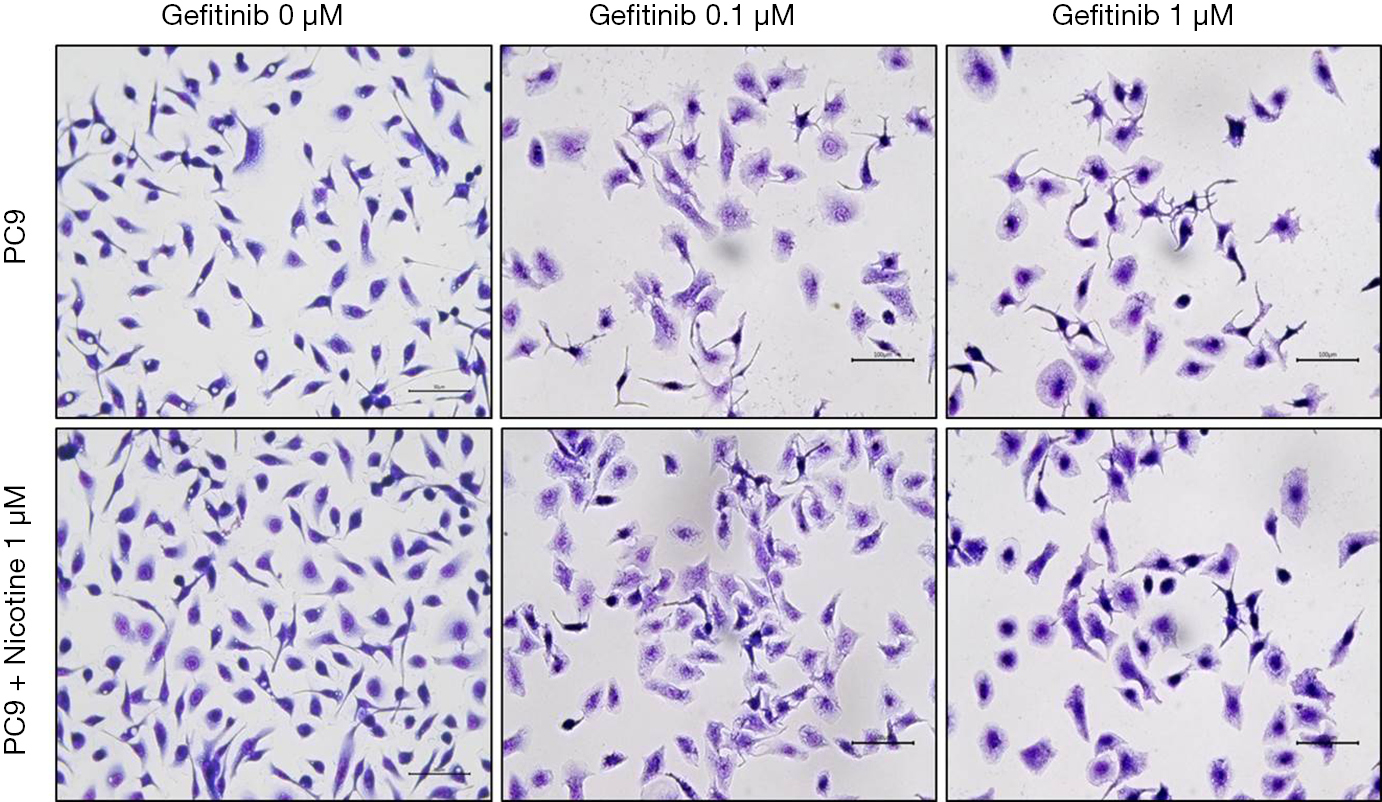 Figure 1 Morphology of cells after treatment with gefitinib in PC9 and PC9/N cells. Cells were seeded in six-well culture plates, and after 24 hrs, the cells were treated with gefitinib (0, 0.1, or 1 µM) for 48 hrs. Cells were photographed under a phase contrast inverted microscope. Cells were stained with Wright and Giemsa (original magnification 200×). These results are representative of technical triplicate.

Figure 2 Cell viability assay for PC9 and PC9/N cells cultured in the presence of gefitinib. Cell growth inhibition in response to gefitinib was evaluated by using the MTT assay. Cells were treated with the indicated concentrations of gefitinib and cell viability was determined 48 hrs later. There are mean of independent triplicate experiments. The data are presented as means ± SEM from technical triplicate. PC9/N: nicotine (1 µM) expose for 3 months in PC9 cells. *, P<0.05; **, P<0.01 and ***, P<0.001 compared with PC9 + gefitinib 0 µM. ##, P<0.01 and ###, P<0.001 compared with PC9/N + gefitinib 0 µM. $, P<0.05 between two cells with gefitinib 0.01 µM. Data are presented as mean ± standard error of the mean (SEM). SEM, standard error. 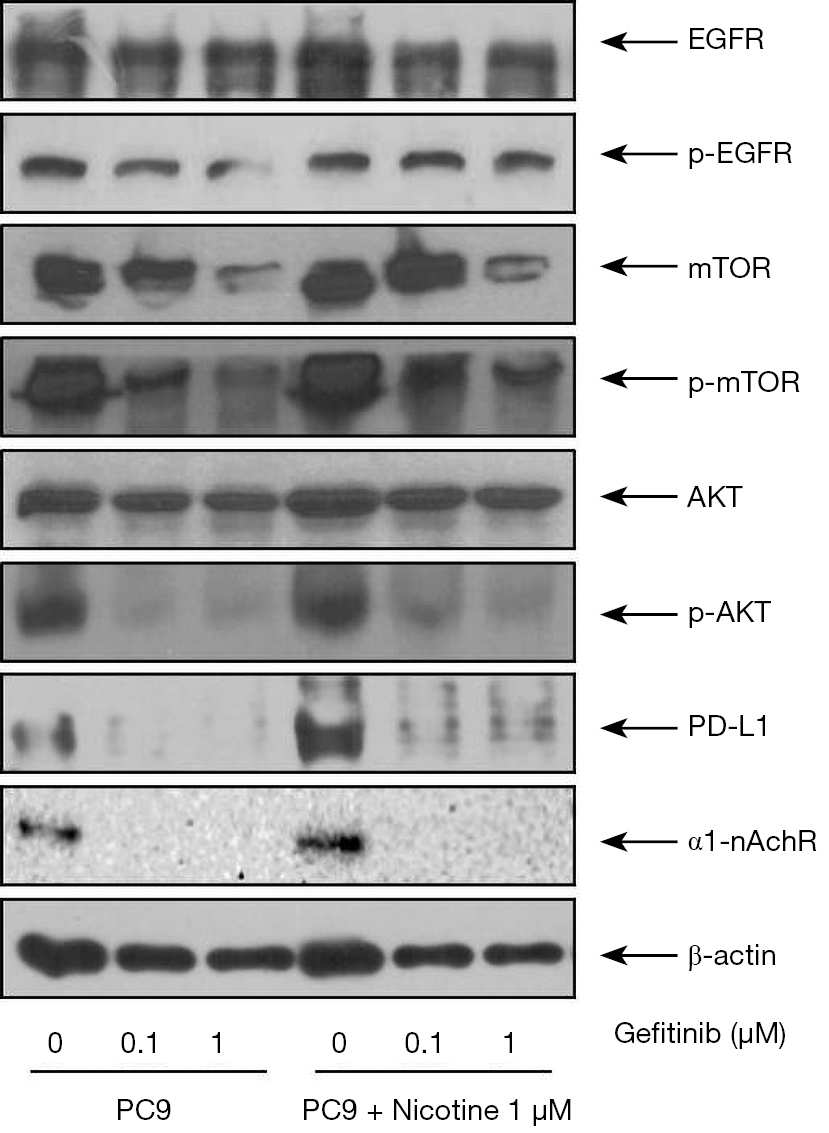 Figure 4 The protein expression levels of cells after treatment with gefitinib in PC9 and PC9/N cells. The cells were cultured with gefitinib (0, 0.1, or 1 µM) for 48 hrs, and EGFR, mTOR, AKT, PD-L1 and α1-nAchR was detected by Western blot. β-actin was used as an internal control. Western blot was quantified by densitometry and ImageJ. These results are representative of technical triplicate. EGFR, epidermal growth factor receptor; PD-L1, programmed death ligand 1; nAchR, nicotinic acetylcholine receptors. 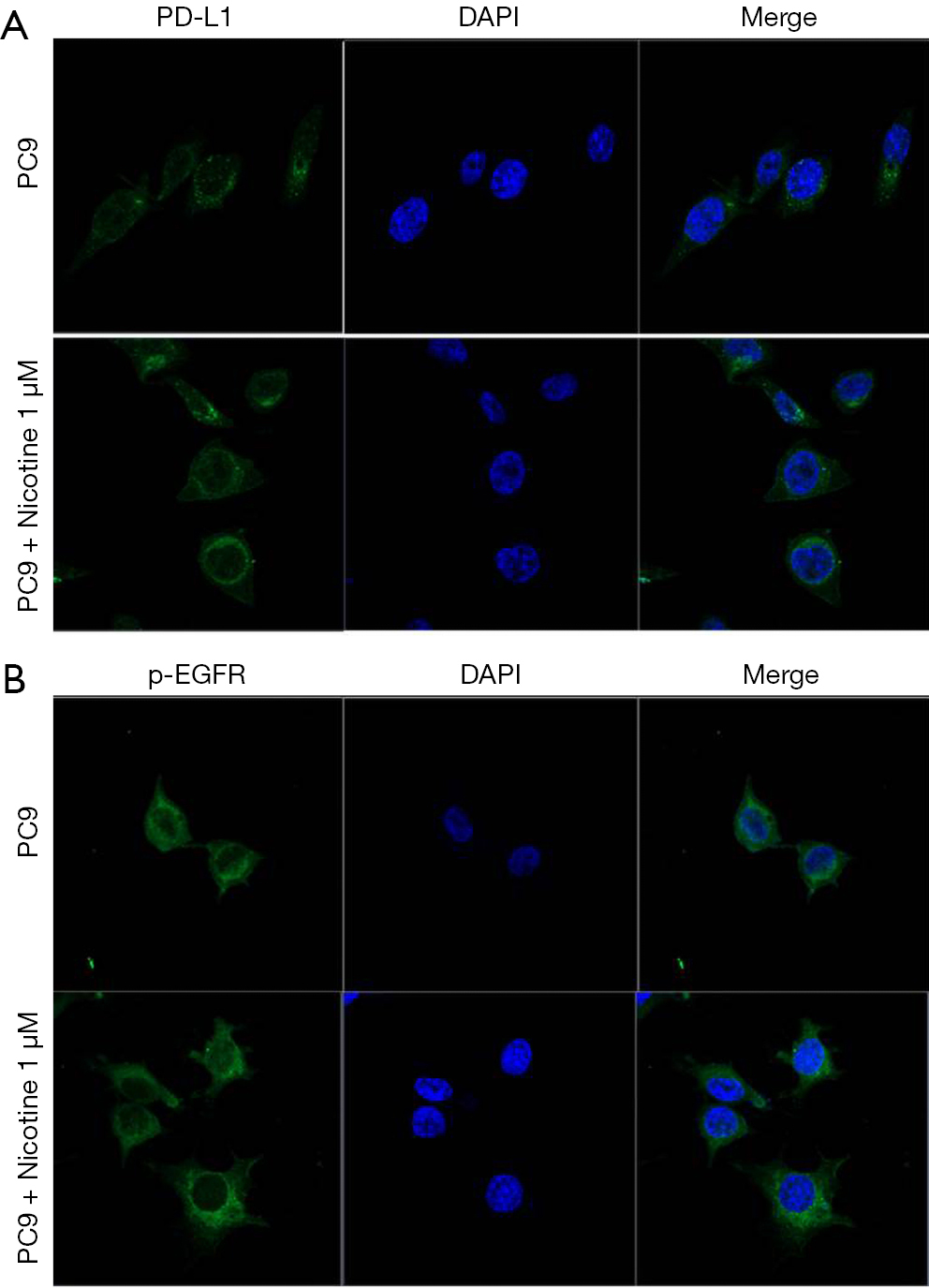 Figure 5 Immunofluorescence staining of PD-L1 and phosphorylation of EGFR in PC9 and PC9/N cells treated with 0.1 µM gefitinib. The localizations of PD-L1 and p-EGFR (green signal; Alexa488) in PC9 and PC9/N cells were shown by immunofluorescence counterstained with DAPI (blue signal) and analyzed by confocal microscopy (original magnification 400×). These results are representative of technical triplicate. DAPI, 4',6-diamidino-2-phenylindole; EGFR, epidermal growth factor receptor.

The overall PD-L1 TPS according to burden of smoking dosage 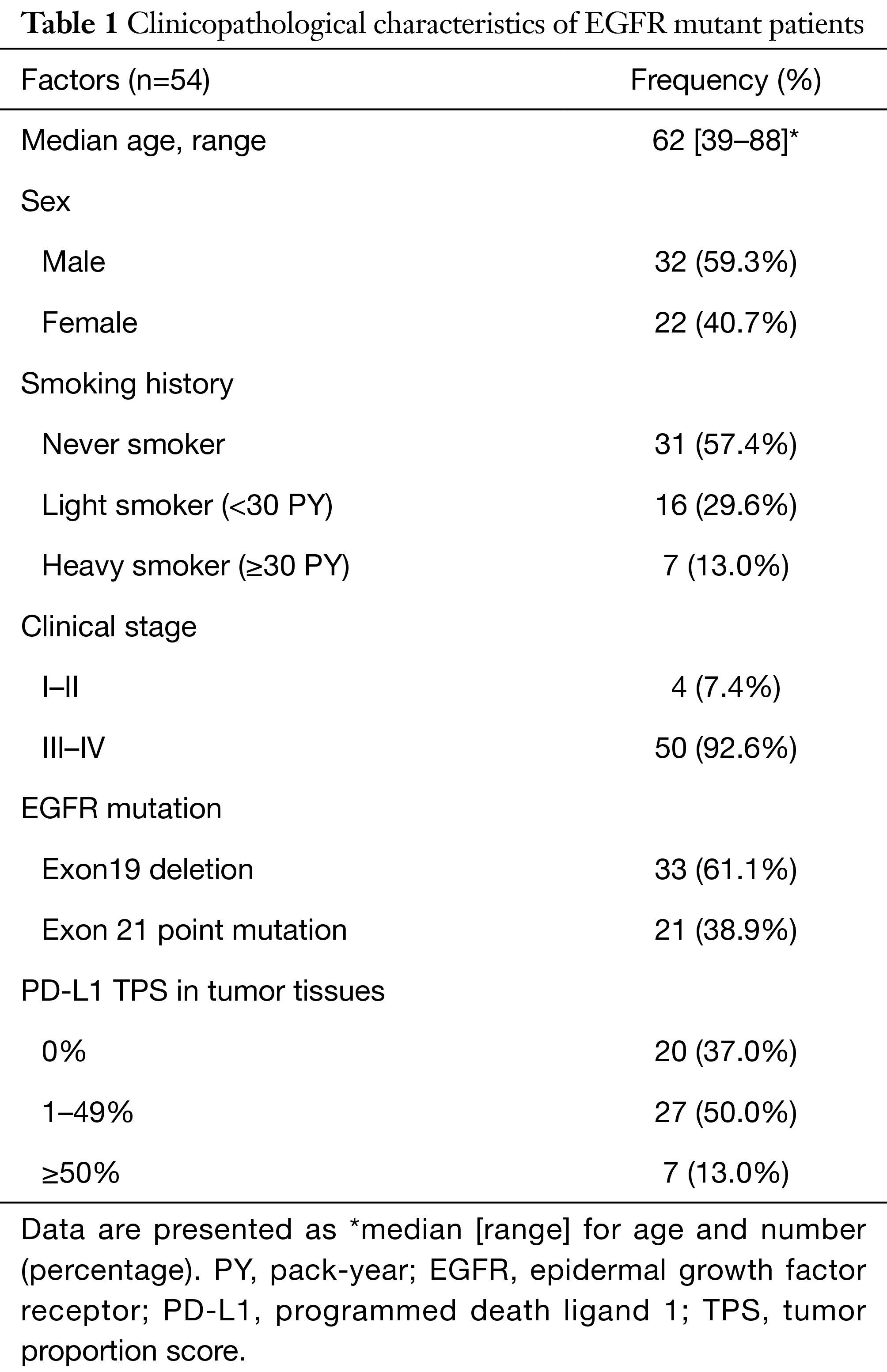 Nicotine, the major addictive component of tobacco smoke, can induce cell-cycle progression, migration, invasion, and evasion of apoptosis, thus contributing to the progression and metastasis of tumor initiated by tobacco carcinogens (26). These effects occur mainly through the binding of nicotine to cell-surface receptors followed by their activation (especially nAChR, and β-adrenergic receptors to a certain extent) (27). Pallai et al. (28) have shown than nicotine can bind to nAChR and induce EGF in NSCLC, resulting in transactivation of EGFR and activation of mitogenic and antiapoptotic pathways. In EGFR mutant cells, chronic nicotine exposure can induce EGFR-TKI resistance via cross-talk between α1-nAChR and EGFR in PC9 cells (16), compatible with our data. In addition, nicotine can activate PI3K/Akt-related pathway and mediate chemotherapy-induced apoptosis in a dose-dependent and time-dependent manner in vitro (29). Akt inhibitor can cause reduction in chemotherapy-induced apoptosis and block anti-apoptotic effect caused by nicotine in A549 cells (30). These findings indicate that nicotine-induced activation of EGFR downstream pathways can mediate EGFR-TKI resistance (31).

Potential therapeutic effect of nAChR antagonists has been experimentally observed in smoking-related malignancies, especially lung cancer (32). Nicotine via nAChR activation can induce invasion, migration, and EMT known to involve MEK/ERK signaling pathway in NSCLC (33,34). Although several novel compounds have recently been developed to overcome acquired EGFR-TKI resistance, little is known about the intrinsic resistance. T790M is a frequent reported mutation of EGFR gene. It has been detected in more than 50% of patients with acquired resistance (3). The major signaling pathways targeted by PD-1 are PI3K-Akt and Ras-MET-ERK pathways (35). PD-L1 expression in tumor cells is markedly increased after acquiring resistance to gefitinib in a subset of patients (36). Gefitinib-resistant sublines (PC9GR1, PC9GR2) that had no acquired T790M mutation showed increased PD-L1 expression with activation in MEK and ERK pathways and EMT phenotype. PD-L1 expression was mediated by PI3K-Akt and MET-ERK signaling pathways in EGFR mutant cell lines (37). PD-L1 upregulation promoted EMT and accelerated carcinogenesis in skin epithelial cells (38). Hata et al. (39) have demonstrated that T790M status is correlated with lower PD-L1 expression in patients with re-biopsied EGFR mutant tumors. Therefore, our results demonstrating increased PD-L1 expression via nAChR-related EGFR resistance is compatible with high PD-L1 expression with EGFR resistance mechanism by alternative bypass signaling activation, not T790M mutation.

Higher PD-L1 expression level was correlated with primary resistance to EGFR-TKIs in advanced EGFR mutant lung cancer (46). In addition, tumor mutation burden (TMB) is known as one of the predictive biomarkers in immunotherapy, and there exists an association between smoking history and high TMB in NSCLC patients (47). Interestingly, there was no difference in TMB based on smoking status in patients with driver mutations (48,49). These reported findings are similar with our results that PD-L1 TPS does not exhibit significant difference according to smoking history (never, light, heavy smokers).

Uninflamed tumor microenvironment with immunological tolerance and weak immunogenicity has been suggested to explain the inferior response of EGFR mutant NSCLC to anti-PD-1/PD-L1 therapy (50). Clinical responses to PD-1 blockade are associated with PD-L1 expression on tumor-resident cells induced by pre-existing CD8+ T cells in “adaptive immune resistance” infiltrating neoplastic tissue (51,52). Even if a tumor expresses PD-L1, anticancer immunosurveillance is unlikely to be reinstated if a tumor is devoid of cytotoxic T cell. Another possible reason is that tumor mutational loads in EGFR mutant-type tumors are lower than those of wild-type tumors (53). Putative biomarkers that can predict the response to anti-PD-1/PD-L1 immunotherapy including tumoral PD-L1 expression, CD8+ T-cell infiltration, and tumor mutational burden have been developed (54).

Although the role of anti-PD-1/PD-L1 therapy in TKI naïve EGFR mutant patients is currently unclear (23), clinical trials in settings of smoking-related intrinsic resistance and TKI failure without T790M are clinically challenging. A retrospective study has shown that smokers with EGFR mutant tumor can predict favorable clinical benefit provided by anti-PD-1/PD-L1 therapy (55), supporting our findings. Recent strategies of immunotherapy combined with cytotoxic chemotherapy, other immunotherapeutic agents, and radiotherapy are promising. They have potential to be applied in EGFR mutant patients. The present data did not show other biomarkers rather than PD-L1 expression. In addition, this study had limitation in that in vitro experiment was performed. Therefore, the efficacy of anti-PD-1/PD-L1 therapy needs to be tested through in vivo study.

Funding: This work was supported by a grant (NRF-2017R1C1B5075564) of the National Research Foundation (NRF) funded by the Ministry of Science, ICT & Future Planning (MSIP), Republic of Korea.

Ethical Statement: The study was approved by the ethics committee at each center (XC14OIMI0070). Informed consent was obtained from all patients.