Gamma knife: a useful tool for treatment of essential tremor

Essential tremor (ET) is the most common movement disorder in the world. In the general population, the estimated prevalence is one percent (1) among adults aged 65 years and older, prevalence is approximately five percent (1). ET has a strong hereditary component, with approximately two-thirds of patients able to identify a relative with ET. Many patients with ET often share well-worn memories of parents, grandparents, aunts, and uncles severely affected by tremor. The pattern of inheritance is autosomal dominant with variable penetrance—over a lifetime the chance of a child of a person with ET developing tremor is one-half, though severity can vary. Incidence among men and women is about the same. Tremor typically occurs in the 5th or 6th decade of life, but may present as early as the teen years or much later in life.

While many may refer to ET as a “benign” condition, it is increasingly recognized as a serious slowly progressive neurological disorder (2,3). The tremor typically worsens with age, and can lead to severe difficulties with basic activities of daily living, such as eating, drinking, writing, opening or closing clothing buttons, or pressing buttons on a telephone or keyboard (4,5).

ET is characterized by an intention tremor of the arms or hands that occurs during voluntary movements, such as manipulating a cup or glass or using a pen or pencil to write. Tremor may also have an axial component, involving the head, neck, jaw, and voice. A minority of patients have axial tremor alone. Patients with ET may also have rest or postural tremor of the extremities, though this is not a hallmark of the disease.

Patients with ET experience a strong psychological component to their disease. Patients are often embarrassed in regard to their inability to enjoy and partake in basic aspects of work and social events such sharing a drink or meal (6). ET can lead to difficulties at work and employability across the spectrum of manual to intellectual labor—ET can equally hamper one’s ability to maneuver a drill or screwdriver as equally as a computer mouse or telephone keypad. As a result, tremor is disabling and can lead to significant depression and social phobia (7-9). The tremor is exacerbated by stress, and compounds social challenges for these patients.

ET is also poorly understood by many in the general population. Many do not understand the nature of this tremor, and the dampening effect of alcoholic beverages may lead to confusion around the relationship of an individual’s tremor. Those who suffer from severe ET may find that a few cocktails, glasses of wine, or beer before dinner render a much steadier hand for guiding a fork or knife. ET symptoms may paradoxically appear to worsen when one does not drink alcohol, sometimes leading to confusion that the tremor may be a sign of alcohol withdrawal.

The underlying cause of ET is unknown, although a great deal of insight into pathophysiological mechanism has been established (10,11). Studies suggest a tremor generator in the inferior olivary nucleus. The tremor signal is then transmitted through cerebellar tracts to the thalamocortical motor circuits. Electrical recordings from the ventral intermediate nucleus (VIM) of the thalamus demonstrate neurons that discharge excessively and synchronously with the tremor.

First line medical therapy for ET is treatment with an anti-epileptic drug or beta-blocker. The two most commonly prescribed medications are primidone and propranolol, though up to one-half of patients will not respond to either drug (12). Studies assessing up to one year of treatment with these two medications show improvement of tremor. However, multiple studies demonstrate a loss of effectiveness over time, need for increasing doses to control tremor, and side effects associated with these medications (13-16).

For patients with severe medically refractory tremor, radiofrequency thalamotomy of the VIM was the surgical procedure of choice for many years, but more recently deep brain stimulation (DBS) has replaced open surgical thalamotomy. Proponents of DBS for the surgical treatment of ET advocate the nondestructive and reversible nature of the procedure, and its effectiveness in relieving ET. However, DBS is an invasive procedure not without risks. Significant side effects of DBS acutely include intracerebral hemorrhage or ischemic infarction associated with hemiparesis and/or decreased consciousness. Potential hardware complications in the long term include discomfort, wound infections, lead malposition and/or migration, component fracture, component malfunction, skin erosion, cognitive decline, and loss of effect (17-24). Further, patients with implanted DBS hardware may be at risk for serious and even life threatening injuries from diathermy, MRI imaging studies performed with a body coil, or electrical currents generated by surgical electrocautery equipment (25-29). Anesthesia risks in the elderly also are significant.

In an effort to avoid these complications and provide definitive therapy for patients who are not also candidates for DBS, multiple retrospective series have been published examining Gamma knife thalamotomy for ET.

Gamma knife radiosurgery is a non-invasive stereotactic radiosurgical procedure with a decades-long track of successful treatment of intracranial neoplasms and functional disorders. Patients are immobilized in an aluminum headframe and undergo axial imaging of the brain, which is reconstructed in three dimensions for precise localization of treatment targets with reference to the fixed headframe coordinate system. A radiation dose in the range of 130-140 Gy is prescribed to the target 100% isodose point within the thalamic VIM.

Multiple centers have published recent results on use of gamma knife radiosurgery treatment for ET (30-33). Three of the larger studies have shown effectiveness in the range of 80% (30-32). A smaller study from France with blinded assessments demonstrated improvement by 55%. Permanent side effects related to Gamma knife radiosurgery are in the range of zero to four percent in these studies. In the Pitttsuburgh series reported by Kooshkabadi et al. (86 patients), two patients developed a temporary contralateral hemiparesis, one patient noted dysphagia, and one patient developed sustained facial sensory loss. In the series from Seattle reported by Young et al. (161 patients), 14 patients suffered neurological side effects—six were temporary and 8 were permanent (two patients had permanent sensory deficits of no function consequence, others had difficulty with speech or contralateral motor function).

Across series, most patients experience tremor control in two to three months. Serial writing and drawing scores (and other measures, e.g., drinking water from a cup) are obtained at baseline and in follow-up. Tremor scores are most commonly assessed according to the rating scale of Fahn, Tolosa, Marin (34).

A patient may be considered for a contralateral Gamma knife treatment if a good response to treatment is obtained initially, though a 12 month waiting period is necessary to be sure patients are outside of the reported side effect period. A patient’s pre- and post-treatment drawing samples are shown in Figure 1. Post-treatment effect characterized by MR imaging in a patient undergoing contralateral Gamma knife thalamotomy is shown in Figure 2. 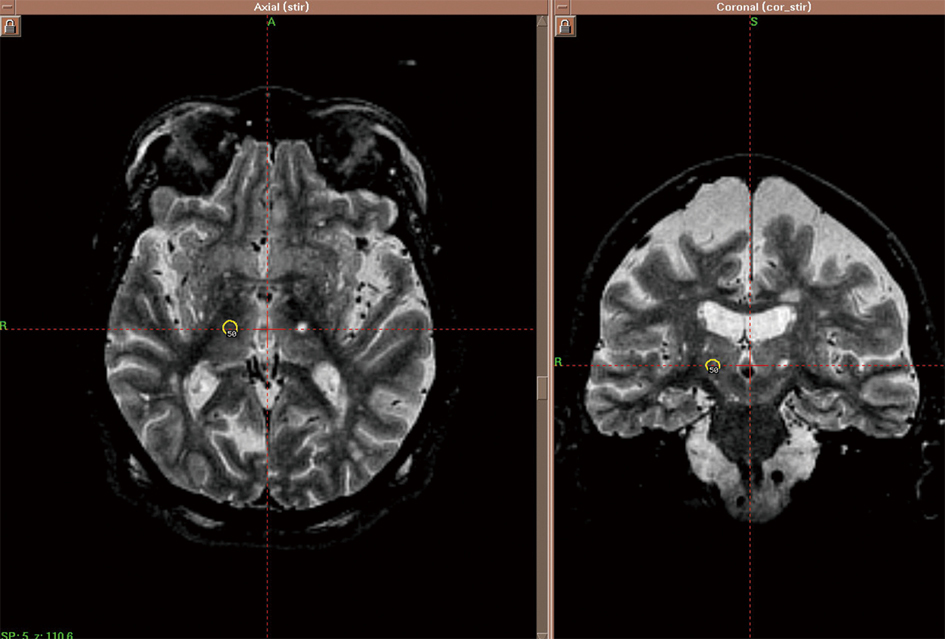 Overall, ET is a serious challenge for many individuals. Gamma knife thalamotomy is a safe and effective noninvasive approach to treatment of ET, worthy of consideration in many patients. It is especially relevant as a treatment option for medically refractory tremor in the elderly or those with contraindications to DBS.