Breast cancer is the most common cancer for women and encompasses 15% of all new cancer cases in the United States (1). It is the second leading cause of cancer death among women accounting for approximately 41,760 deaths annually (2). Numerous risk factors, both modifiable and nonmodifiable, have been identified for breast cancer risk. Nonmodifiable factors include age, race, menarche, reproductive history, personal breast cancer history, family history/genetic inheritance, and various medical treatments (3-9). A large part of breast cancer risk comes from modifiable risk factors such as reproductive history, sedentary lifestyle, hormone replacements, smoking, stress/anxiety, body weight, alcohol use, and physical activity (3-12). Of these modifiable risk factors, physical activity has been associated with a 20–80% reduction in the risk of breast cancer (3,7,13,14). The American Cancer Society recommends adults participate in a minimum of 150 minutes of moderate or 75 minutes of vigorous physical activity each week (15). Numerous studies have identified inverse associations between physical activity and breast cancer risk (3-8,10,11,13,14,16-33), as well as positive associations between sedentary behaviors and breast cancer risk (10,20,34). Physical activity is also known to have an inverse dose-response relationship with obesity (35). Despite knowing that being physically active and maintaining a healthy lifestyle decreases one’s risk for breast cancer, a substantial proportion of American adults remain physically inactive (36) and nearly 30% of adults 18 years and older in the U.S. have been classified as being obese (37) and the trend continues to increase (38). Particularly in the state of Arkansas, the current adult obesity rate as of 2017 was 35%, ranking the state 7th in the nation for obesity (39). Since 1997, the adult obesity rate has increased over the past 27 years (17% vs. 35%) (39). With the alarmingly high rate of obesity among Arkansan women, further investigation into the health effects resulting from lack of physical activity is necessary. By identifying preventative strategies such as physical activity, cases of breast cancer as well as obesity rates can be reduced.

Different mechanistic pathways for breast cancer have been proposed for pre- and post-menopausal women. After menopause, estrogen is largely produced in adipose tissue (40). These sex hormones have been identified to stimulate cellular proliferation in the breast; therefore an increase in adipose tissue in postmenopausal women has been identified as an increased risk for breast cancer (6,11,26,29,32,40). An association between lowering various circulating hormones and growth factors in the body and breast cancer development and progression has been identified (41). By preventing obesity and its adverse health outcomes, particularly relating to body’s responses to insulin, reduced inflammation and enhanced immune function are anticipated (42). Among premenopausal women, sex hormones are stored in the ovaries, therefore are less influenced by fat deposition, resulting in an inverse association between obesity and breast cancer (40). Given these known differences in breast cancer pathways between pre- and post-menopausal women, this study utilized data obtained from the Arkansas Rural Community Health (ARCH) Study, a largely rural cohort population in the mid-south region of the United States, to evaluate the association between leisure physical activities and breast cancer among pre- and post-menopausal women in Arkansas.

The present study used data collected from the Arkansas Rural Community Health (ARCH) Study cohort, formerly known as Spit for the Cure (43,44). Representation from all 75 counties in Arkansas is included in the cohort, as well as an overrepresentation among the African Americans. Although the cohort is racially diverse, education attainment is higher than the state average. The ARCH population was not intended to be representative of the entire female population. Baseline data including socioeconomic status, family and medical history, reproductive health, and physical activity were collected from 26,347 women between the ages of 18 and 100 through various community events. Among these women, 2,333 women were excluded due to reporting having a breast cancer diagnoses at baseline and 339 women were excluded due to missing or error in baseline information regarding breast cancer status. Those who participated at baseline and consented to be re-contacted were mailed a follow-up survey pertaining to their cancer status. Further linkage to the Arkansas Central Cancer Registry was performed annually through December 2018. A total of 193 women were excluded due to follow-up or Arkansas Central Cancer Registry information indicating having a positive breast cancer diagnosis at baseline. Overall, 23,482 women were eligible for the current study based on breast cancer status. 728 individuals were further excluded due to BMI or weight errors in data entry. A total of 823 women were also excluded due to missing or unsure menopausal status. The final dataset consists of 266 incident breast cancer cases and 21,665 non-cases. Among the cases, 77 reported being premenopausal and 189 reported being postmenopausal. Non-cases consisted of 12,128 premenopausal and 9,537 postmenopausal women. Study protocols are approved by the University of Arkansas for Medical Sciences Institutional Review Board.

Physical activity information was based on self-report measures at enrollment (21). Three different measurement and quantification tools were utilized to accurately assess physical activity. First, levels of physical activity were categorized within the self-report questionnaire as, “Vigorous Activity”, “Moderate Activity”, “Walking”, and “Sitting”, including examples of activities respective to each category. Examples of self-reported activities are provided in Table 1. As commonly reported in the literature, walking was separated from moderate activity due to, depending on how brisk, it generally falls into the lower end of the intensity spectrum for most people. It is thus used to investigate the potential health effects separately (46,47). Frequency of each activity level, as well as the duration of activities, was reported. Analyses were performed on each level of physical activity based on a calculation of total weekly minutes performed. The second assessment of physical activity was the overall amount performed calculated by cumulative weekly minutes of activity. This assessment excluded intensity level previously analyzed and utilized total summation of weekly minutes spent engaging in physical activity. The last assessment was defined as a metabolic equivalent of task (MET) score. The MET score was calculated for each individual based on existing literature (13,48-50). A MET is defined as the resting metabolic rate, the amount of oxygen consumed at rest (49,50). Each level of physical activity was categorized based on the amount of energy expended; more intense activities are given a higher numeric value. The calculation for an individual’s weekly MET score is as follows:

Differences in patient characteristics between cases and non-cases were evaluated using χ2 tests for categorical variables, and t-tests for continuous variables. Vigorous and moderate physical activity, as well as time spent walking, were categorized into three classes based on the distributions among cases; the first class being those who participated in the activity for less than one hour per week, the midpoint of the remaining values was identified to separate the lower and upper values into two classes. Time spent sitting, overall weekly physical activity, and the metabolic equivalent of task score were categorized based on tertiles, dividing the variables into three equal parts based on their distributions among cases. 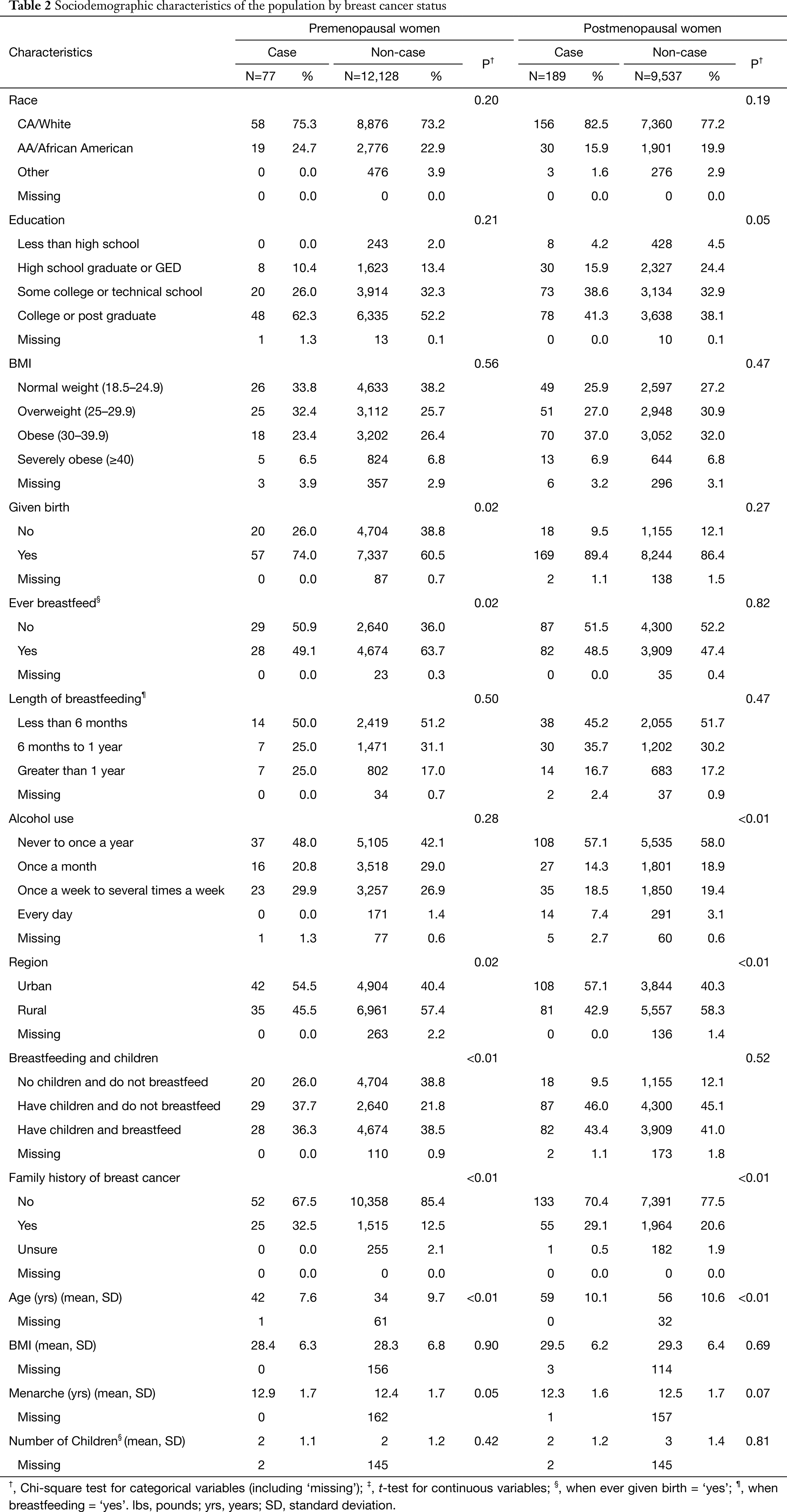 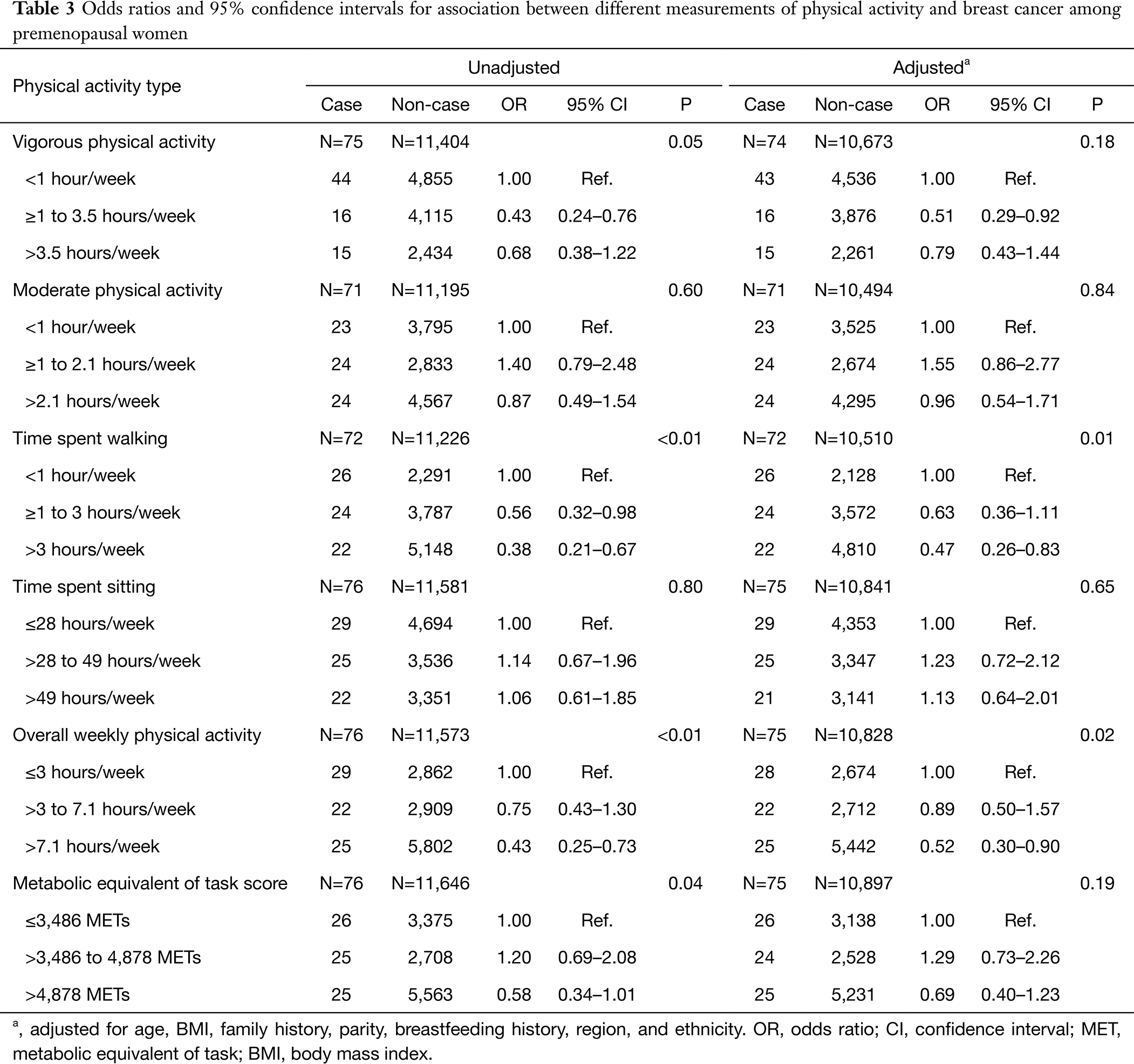 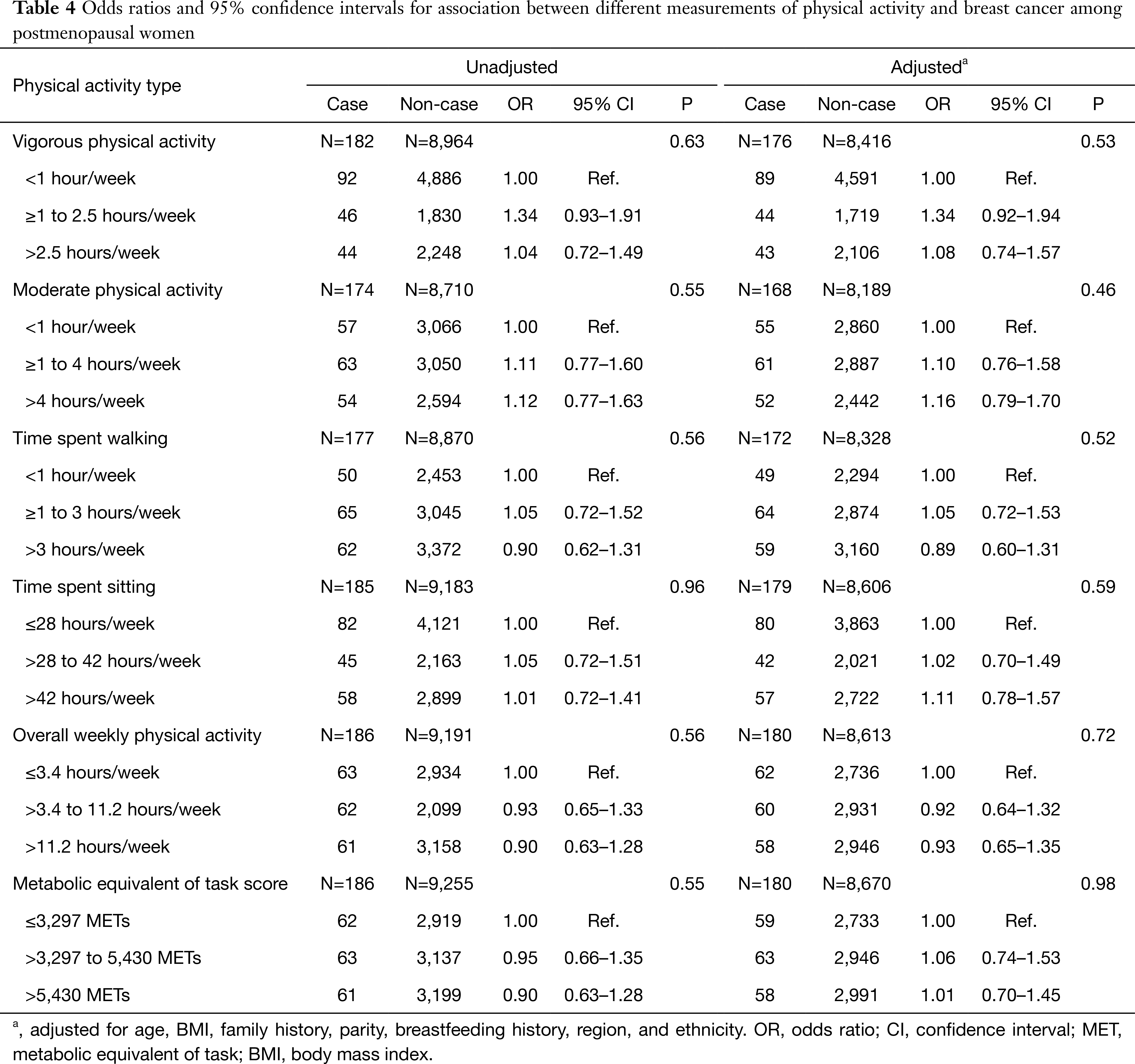 The present study was unable to establish an association between risk for breast cancer among postmenopausal subjects and physical activity. One hypothesis that may explain the null findings is obesity (7). It is evident in the literature that physical activity is needed to sufficiently reduce adiposity, thus reducing circulating estrogen levels in women postmenopausal (30,32,40). Despite knowing that a decrease in obesity is related to a decreased breast cancer risk, the optimal intensity level to decrease breast cancer risk in postmenopausal women is still under-defined (30). Previous studies have established that obesity has an association with breast cancer risk among postmenopausal subjects (4-8,10,11,23-32,53), particularly a dose-response relationship (30,37). While the current study adjusted for BMI as a confounding factor, given majority of this study cohort are overweight or obese (>60% and 70% among pre- and post-menopausal women, respectively), residual confounding may still occur due to inaccurate self-report measures. A subsequent analysis was carried out among postmenopausal subject, while stratifying among obesity status. However no significant differences were observed (results not shown).

Other explanations may account for the null associations found among breast cancer risk and physical activity observed among postmenopausal subjects. Information on other cancer type besides breast is not a variable at this point. Data collected at baseline as well as follow-up data were recorded using self-reported questionnaires. These responses are at an increased risk for recall bias due to social desirability and cognitive demands of recall (17). This may be particularly true for weight and waist and hip circumferences (20,21,54). These issues can be higher among cases undergoing treatment as well as having treatment-related or disease-related symptoms. Although cases were identified and surveys were collected a minimum of one year before diagnosis, undiagnosed cases may still have disease-related symptoms prior to diagnosis. As a result, individuals may have reflected modified behavior. Questions regarding self-reported physical activity at baseline were asked in regards to days participated and duration of participation. Several participants reported over six hours of vigorous physical activity seven days out of the week. This suggests that these questions are subject to possible misreporting bias (10). This bias could be due to social desirability or different interpretations of the different levels of physical activity among participants. Even though there was no distinction made regarding leisure time vs. occupational physical activity in the questionnaire, the literature indicates that there is a distinction between the two (27). Individuals may over or under report based on their occupational status, including or excluding physical activity that is carried out while at place of employment. Results of this study could be biased due to this distinction.

This study identified that various levels of physical activity are likely to be associated with breast cancer risk among Arkansan women. While results were not established among postmenopausal subjects, more substantial results were found among premenopausal subjects. This study has highlighted that breast cancer risk is not equivalent between women of different menopausal status, and should be investigated individually, particularly regarding the covariate of obesity. While all findings did not provide significant associations, they cannot be ruled out. The lack of concordance in associations between menopausal statuses entails caution for the interpretation of these results. For all women, participation in moderate physical activity is encouraged. With substantial breast cancer incidence in the state of Arkansas, and few established modifiable risk factors are known, further investigation into physical activity is needed to accurately determine the relationship with breast cancer risk among both pre- and postmenopausal women.

This research was supported by a grant from the Arkansas Breast Cancer Research Programs.

Ethical Statement: Study protocols are approved by the University of Arkansas for Medical Sciences Institutional Review Board. The authors are accountable for all aspects of the work in ensuring that questions related to the accuracy or integrity of any part of the work are appropriately investigated and resolved.