Advances in cancer early-detection screening and treatment have contributed to an overall increase in national cancer survivorship rates. Currently, there are an estimated 15.5 million cancer survivors living in the United States (1). Among cancer survivors, quality of life (QOL) represents an important indicator of functioning and well-being. Health-related QOL is defined as the degree to which one’s physical, emotional, social, and spiritual well-being are impacted by an illness and its treatment (2,3). Previous evidence-based studies have found that individual sociodemographic (e.g., age, gender, education, race/ethnicity, income, marital status) (2,4-8) and clinical factors (e.g., age at diagnosis, medical comorbidities, time of cancer diagnosis, cancer stage) (4,9,10) are significant predictors of QOL in cancer survivors.

The impact of individual level factors such as demographic and clinical characteristics on health-related quality of life has been well-documented in prior research (11,12). Beyond individual factors, the neighborhood factors have been showed to have impacts on health-related quality of life in general population (13). Neighborhood disadvantage refers to the lack of economic and social sources in a neighborhood and has been shown to exert a detrimental effect on health outcomes over and above individual level characteristics (14,15). Racial segregation has been found to be associated with differences in socioeconomic status that leads to racial health disparities (16). In the U.S., African American is a population with the highest degree of residential segregation (17). African Americans are more likely to live in disadvantaged neighborhoods that increase the risk of having an adverse psychological condition such as QOL (18). Prior research showed that neighborhood disadvantage is associated with health and health outcomes across the cancer continuum, including cancer incidence, diagnosis, treatment, the survivorship period, and survival rates (19,20). Despite the importance of QOL among cancer survivors, limited research exists that examines the influence of neighborhood disadvantage on QOL outcomes among cancer survivors. Understanding the influence of neighborhood factors on cancer survivorship outcomes has important implications for informing public policy and neighborhood level interventions (21).

Data for this secondary data analysis study were from a large survey study of the QOL of African American and White breast, prostate and colorectal cancer patients conducted from 1999–2003. In the study, a total of 753 patients meeting eligibility criteria (African American or white, breast, prostate or colorectal cancer diagnosis, and within three years of an initial diagnosis) were identified. Upon telephone interview, 149 cases were found to be ineligible (more than 36 months since diagnosis, other cancer site, deceased, non-English speaking). Of the qualified cases (N=604), 492 (81.5%) completed the interview (44 were not found, 51 refused to participate and 17 started the interview, but did not complete the majority of the questions and were excluded from the analysis; See Manfredi, Kaiser, Matthews & Johnson, 2010 for a full description of study procedures) (22). Therefore, the analytical sample included 492 African American (n=248) and White cancer survivors (n=244). The study protocol was approved by the Institutional Review Boards at the University of Chicago and the University of Illinois at Chicago.

The Medical Outcomes Study 36-Item Short Form Health Survey (SF-36) was used to measure QOL (23). The SF-36 encompasses two components, including (1) physical health quality of life (PHQOL) that measures physical functioning, role limitations due to physical problems, bodily pain, and general health; and (2) mental health quality of life (MHQOL) that measures energy/vitality, social functioning, role limitations due to emotional problems, and mental health. Both QOL summary scores range from 0 to 100, with a higher score indicating better QOL. In the current sample, the internal consistency as measured by Cronbach’s alpha was 0.81 for the physical health summary scale and 0.78 for the mental health summary scale.

Descriptive statistics were used to describe the characteristics of study sample. Bivariate analyses (Chi-Square test and Mann-Whitney U test) were performed to examine differences in demographic characteristics, clinical factors, QOL, and neighborhood disadvantage between the African American and White samples. For the multivariate analysis, in order to account for clustering of observations within neighborhood, mixed effect linear regression models with a random intercept were used to assess the association between neighborhood disadvantage (NDI) and quality of life (i.e., PHQOL and MHQOL) after adjusting for demographic characteristics and clinical factors. However, two demographic factors including income and education variables were excluded from the model due to a potential collinearity issue (between NDI scores and individual education and income variables) that had a significant impact on QOL. Furthermore, the normal Q-Q plots of NDI showed an acceptable distribution for normal distribution. The mixed effect linear model used in this study has been approved to be robust to violations of some of their assumptions such as “random effects and/or residual errors might not be normally distributed” (24). All the analyses were performed using SAS version 9.4, a statistical software package. 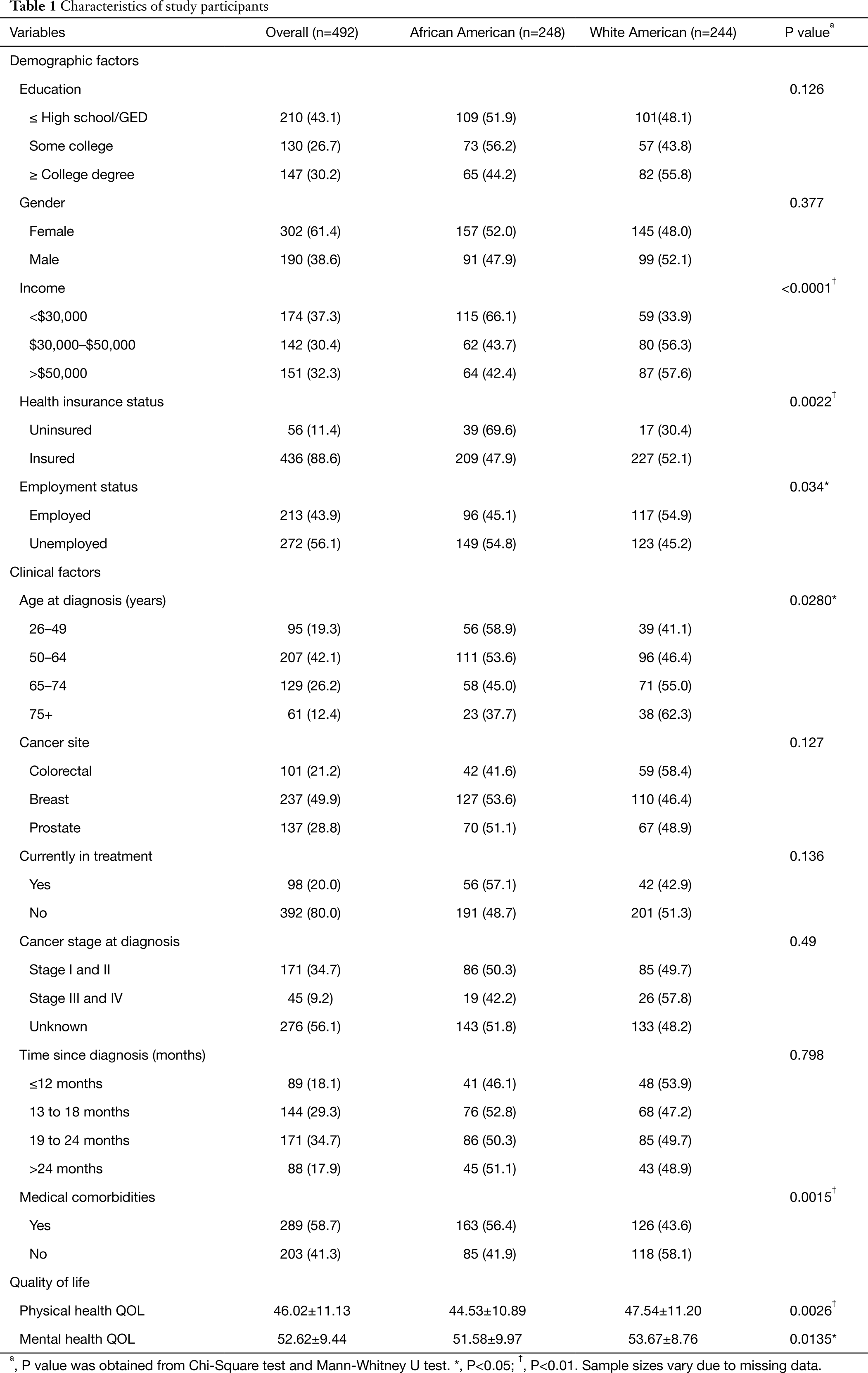 The influence of neighborhood disadvantage on physical health

Multivariate results in Table 3 shows that cancer survivors residing in neighborhoods with higher levels of disadvantage reported lower PHQOL scores than those residing in more advantaged neighborhoods (β =−1.21, P=0.0203). Additional correlates of lower PHQOL scores included being female, unemployed, having later stage disease (i.e., Stage III and IV), less time since diagnosis (<2 years), and being diagnosed with a separate comorbid medical condition. Among Whites, within group analyses suggest a similar pattern of demographic and clinical correlates of PHQOL as was observed in the combined sample. However, none of the clinical (except medical comorbidities) or demographic variables tested were independently associated with PHQOL outcomes among African Americans. There was a marginally significant trend for the independent effect of neighborhood disadvantage on PHQOL within African American cancer survivors (P=0.059) but not White cancer survivors (P=0.1642). 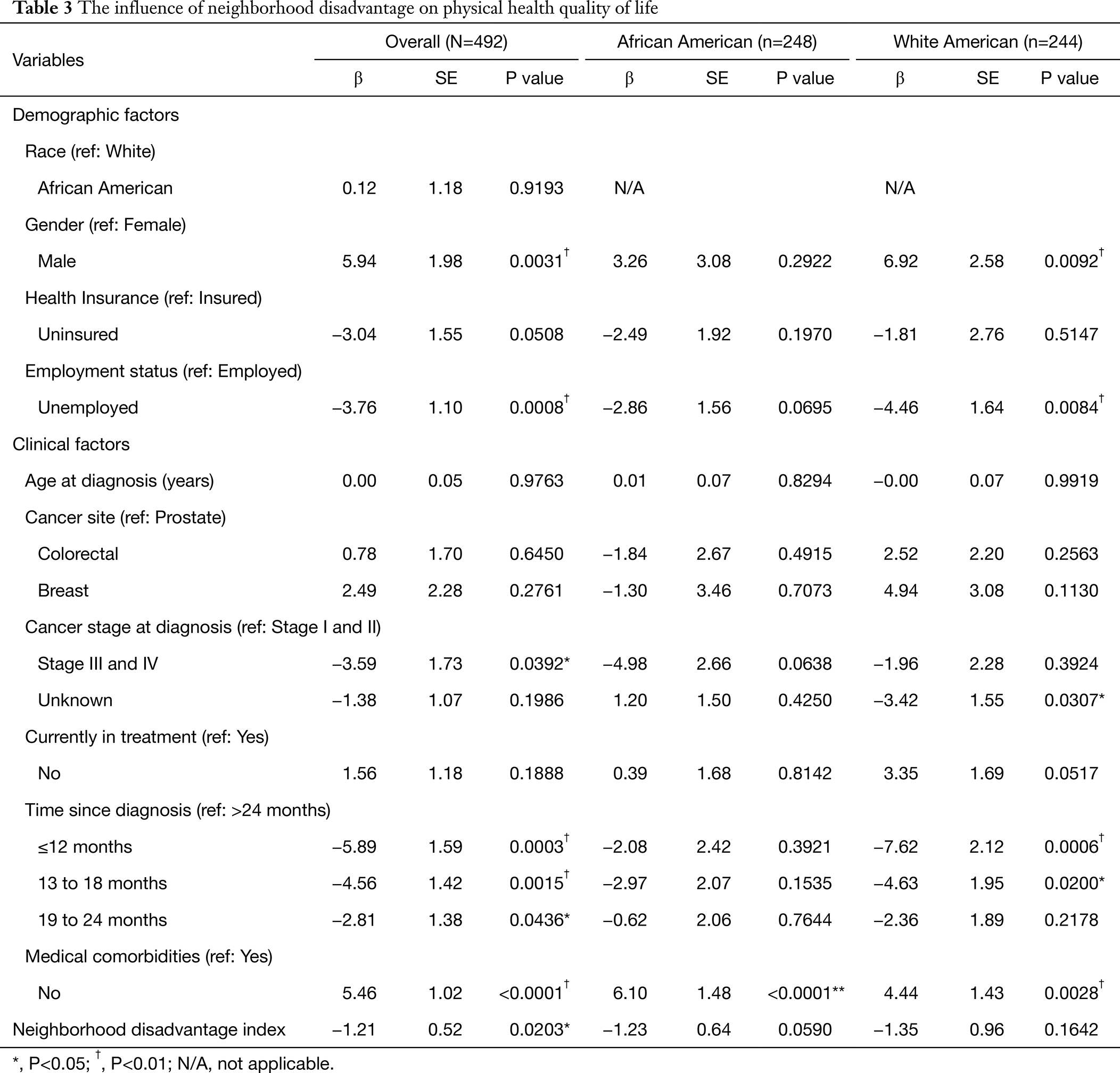 The influence of neighborhood disadvantage on mental health quality of life

Unlike PHQOL, multivariate results showed that neighborhood disadvantage was not an independent predictor of MHQOL scores in either the overall sample (P=0.9469) or in models examining African American (P=0.5817) and White cancer survivors separately (P=0.3282) (Table 4). In the combined sample, employment and age at diagnosis were the significant predictors of MHQOL scores. Compared to individuals who were employed, unemployed cancer survivors reported statistically significant lower levels of MHQOL (P=0.011). Individuals who were older at the time of diagnosis reported better MHQOL outcomes compared to younger participants (P=0.005). Among Whites, within group analyses suggest a similar pattern of demographic and clinical correlates of MHQOL as was observed in the combined sample. However, none of the clinical or demographic variables tested were independently associated with MHQOL outcomes among African Americans. 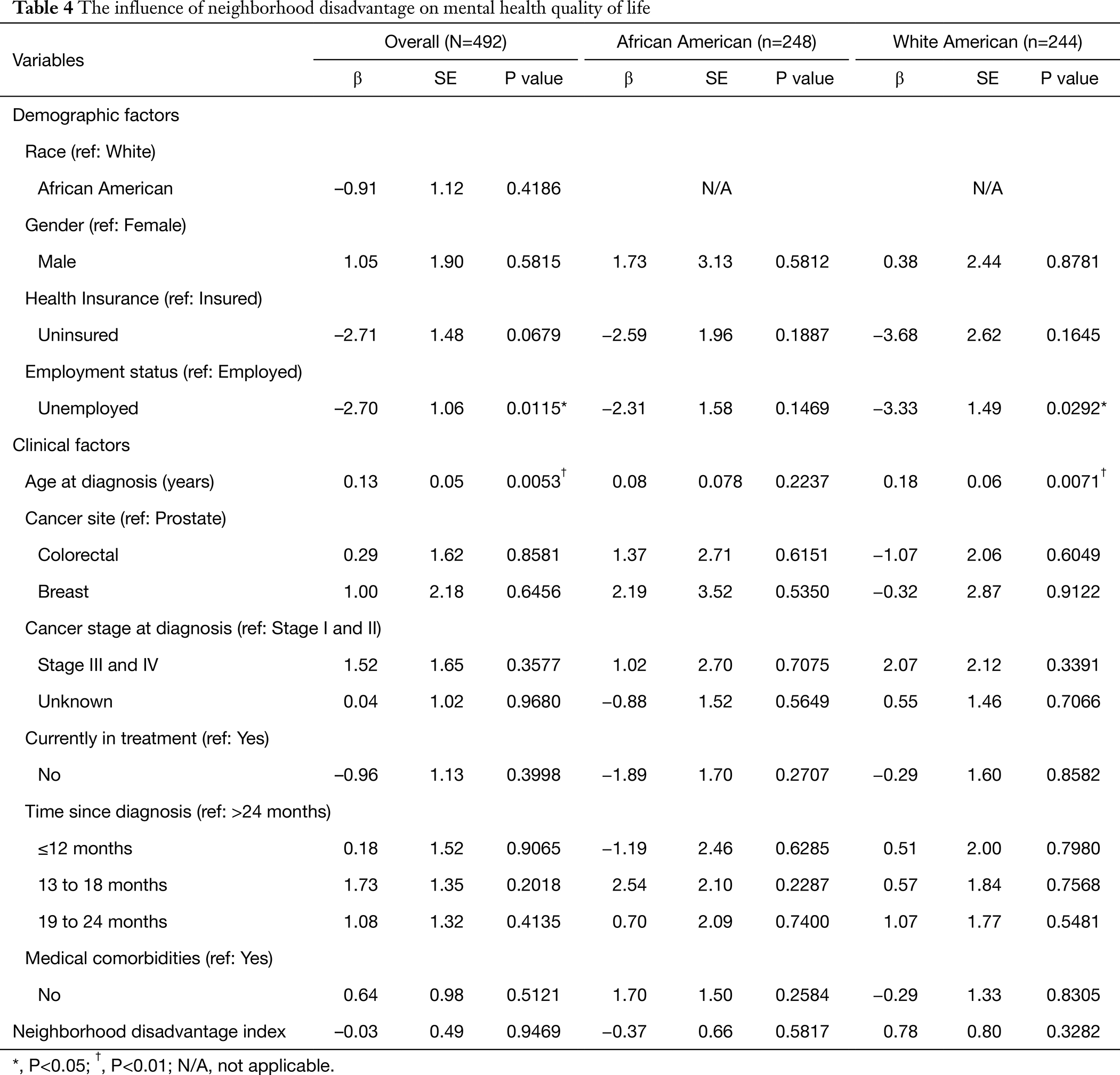 In bivariate analyses, African Americans were much more likely than Whites to reside in disadvantaged neighborhoods. However, in multivariate analyses controlling for demographic and clinical factors, race was not an independent predictor of PHQOL in the overall model. In the multivariate models examining each racial group separately, among African Americans there was an independent but marginally-significant trend toward lower rates of PHQOL among individuals residing in neighborhoods with higher rates of disadvantage; however, this same relationship was not observed among White cancer survivors. In general, African Americans are much more likely to live in a segregated and economically disadvantaged neighborhood compared to Whites (29). This is especially true in Chicago and the greater metropolitan area (30). Additional research is needed in populations with more variation in neighborhood disadvantages scores to better understand potential interactions between race, neighborhood disadvantage and PHQOL.

Beyond neighborhood factors, demographic and clinical factors were also found to be independently associated with PHQOL. In terms of demographic factors, male respondents reported higher PHQOL compared to female respondents. This finding is consistent with a prior study of cancer patients where male patients maintained overall strength and PHQOL to a larger degree than female cancer patients (31). In addition, individuals who were unemployed reported lower PHQOL compared to those who were employed. This finding has also been reported in the literature for breast cancer patients (32). Clinical factors associated with lower PHQOL scores were also consistent with the extant literature and included later stage disease (stages III and IV), being within 24 months since the time of initial diagnosis, and the presence of a medical comorbidity. In analyses examining African Americans and Whites separately, the patterns of results for Whites were very consistent with those for the overall sample. However, only having an additional comorbid medical disorder was statistically and independently associated with PHQOL among African Americans suggesting additional but unmeasured factors may play a role in this population.

Several study limitations should be noted. First, the cross-sectional study design utilized in this study increases the possibility of misclassifying neighborhoods regarding the timing of influence vis-a-vis the critical exposure window for the relevant outcomes (20). Second, clinical data such as stage of cancer at diagnosis were based on self-report and potentially subject to recall bias. Lastly, White cancer patients were recruited from the Illinois counties where African American cancer patients were mainly recruited. Therefore, White patients in the study is not representative of those who resided in more affluent suburban counties or in some rural areas. Further, the potential of lacking variations between neighborhoods may be considered due to limited number of counties in the Illinois State.

We thank the Illinois State Cancer Registry for their cooperation with this study. This paper is dedicated to the loving memory of Rita Ann Matthews - cancer survivor, life-long and proud Appalachian resident, and mother.

Funding: This research was supported by a grant from the National Cancer Institute, Bethesda, MD (1R01CA775-01A1: Matthews, A.K., PI).