Stereotactic radiosurgery (SRS) is a non-invasive way to target a small area inside the body using relatively high doses of radiation. One common and important use of SRS is its ability to treat intracranial metastatic tumors. It has been shown in previous studies that local tumor control can be achieved by SRS alone or SRS alongside whole brain radiation therapy (WBRT) (1-4).

For earlier SRS delivery, a head frame was used to prevent patient movement. These head frames required rigid, screw fixation into the patient’s skull. However, certain disadvantages such as fractionation limitation as well as discomfort were troublesome (5). Lately, newer frameless image guided SRS systems, which provide similar accuracy to that of head frame-based therapy, have been popularized (6-8). The newer systems use a customized plastic mask in place of a head frame. But like the frame-based models, the frameless models also have disadvantages. Since patients are exposed to CT scans and serial X-rays, infrared fiducials are required in order to abide by radiation regulations which limit the amount of ionizing radiation exposure a patient receives (9,10). In some systems, the fiducials are attached to a bite block (Figure 1A), and the bite block, not the patient per se, is subsequently tracked during the procedure. Patients with poor dental structure or those with an inability to breath freely through their nose were difficult, if not impossible, to treat. Another noted drawback is the possibility of fiducial movement at the attachment point (11).

Figure 1 (A) Example of infrared fiducials attached to the bite block for localization and a rigid mask for immobilization used in stereotactic radiosurgery at our institution before SIG-RS; (B) side view of the frameless, real-time, surface imaging-guided radiosurgery (SIG-RS) setup, including an open-faced mask. The open face leaves facial landmarks available for surface image monitoring and patient comfort, and the forehead and mandible rigidity provides stability; (C) example of the region of interest monitored by the surface imaging system that included the forehead, nose, zygomatic bones and temporal bones, but excludes the tip of nose and eye lids.

To avoid these drawbacks, surface image guided (SIG) systems are being used to deliver SRS. One such system is AlignRT (VisionRT Ltd, London, England), which uses three ceiling mounted non-ionizing camera pods. Accuracy of AlignRT is similar to that of cone-beam CT (CBCT) and infrared marker tracking (12-14). The AlignRT system provides real-time monitoring of facial landmarks during treatment. In this report, we will present our updated clinical outcomes of patients with brain metastases that were treated with real-time, frameless, non-ionizing SIG radiosurgery (SIG-RS).

Medical records for 163 patients with a minimum age of 16 were retrieved for this study, with approval from the local institutional review board. A total of 490 lesions were reported between December 2008 and April 2014 among the 163 patients. Forty-three of the patients (26%) presented with a total of 45 cavity resections. Ninety patients were treated with SRS alone. Forty-three patients (26.4%) received surgical resection followed by SIG-RS. Thirty patients (18%) received WBRT following SIG-RS and four patients (2.4%) received WBRT prior to SIG-RS. Patients received a median dose of 22 Gy (range, 12-30 Gy) when treated with SIG-RS. Patient and treatment characteristics are further noted in Table 1. 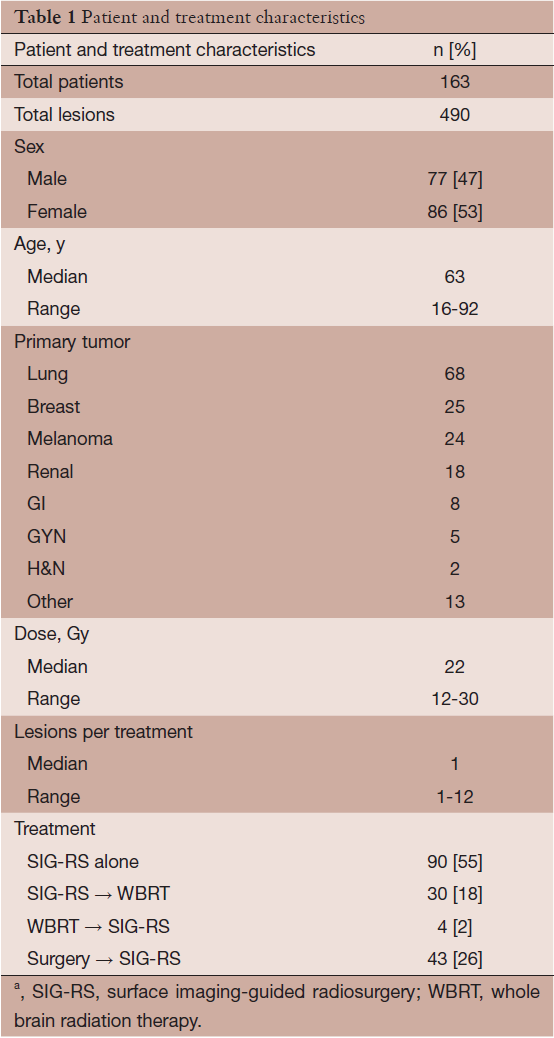 Patients were analyzed by magnetic resonance imaging (MRI) with 1.25-mm axial slice intervals using a 3.0-T MRI (General Electric, Fairfield, Connecticut). Patients were immobilized in two ways. Initially, a foam head mold (CDR Systems, Calgary, Alberta, Canada) was fit to the patient’s head for the first 44 patients. This setup proved to be inefficient as it required restraints and tape for stabilizing the patient’s forehead and jaw. For subsequent patients, a custom open-faced mask (CIVCO, Medical Solutions, Kalona, Iowa) was used and proved to be more efficient compared to the initial method as it provided stability to the forehead and mandible without the use of tape and restraints. In addition, an SRS headrest including a custom foam cushion (AccuForm, CIVCO Medical Solutions) was added to the open-faced mask for increased patient comfort and reproducibility. The open-faced mask can be seen in Figure 1B.

On treatment day, patients were initially setup using the surface imaging system, AlignRT, with the planning CT generated surface as the target. The AlignRT system uses three camera pods; each pod contains three cameras (two for stereovision, one for texture). Each pod also contains a speckle flash unit for static imaging and a speckle projector for dynamic imaging. The AlignRT registration algorithm identifies errors with six degrees of freedom—vertical, lateral, longitudinal, roll, yaw, and pitch. After initial setup by AlignRT, orthogonal kV and CBCT imaging were performed to determine any necessary shifts. After any necessary shifts were applied, a new reference surface was acquired by AlignRT for intrafraction monitoring. On the day of treatment, patients were tracked using visual monitors at the control room. AlignRT monitored the patient’s in real-time (about five frames per second) throughout the duration of treatment. Predetermined translational threshold was between 1 and 2 mm and rotational threshold was 1°. Automatic Trilogy beam or manual TrueBeam hold was used if patient movement surpassed these thresholds. During beam hold, patients usually moved back into position without external intervention. If patients had difficulty reverting to a position, AlignRT guidance was used to reposition the patient.

One hundred and thirty four of the 163 patients received follow up imaging studies after treatment. The remaining 29 patients either passed away before their scheduled MRI or imaging wasn’t available. Follow up times (the time difference between time of treatment and follow up MRI or death) were calculated for each patient. For those patients whose imaging was not available, they were not included in the local control analyses but all 163 patients were included in overall survival analysis. Local control, defined as a lack of progression of disease, was determined per patient and per lesion. Disease progression was defined as radiographic increase >20% of the sum of the largest diameters of a treated lesion. Additional imaging studies including MRI with spectroscopy, perfusion studies or brain PET/CT were also used in some of the cases to evaluate for recurrence vs. radionecrosis. Those patients whose disease showed recurrent local failure or new disease were subsequently treated with SIG-RS, WBRT or surgery. Analyses for local control and overall survival were calculated using the Kaplan-Meier method, and Kaplan-Meier curve differences were then analyzed using the log-rank test. SAS Statistics software provided all statistical analyses. 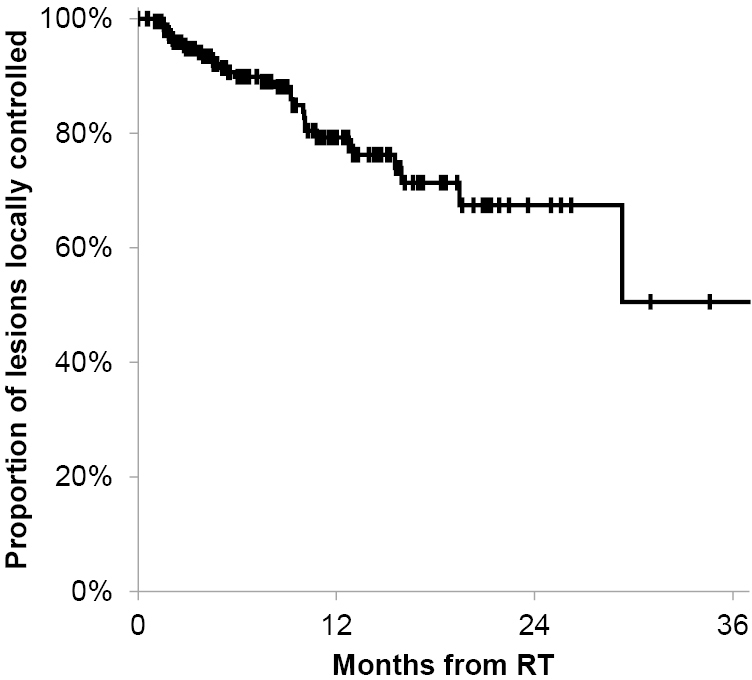 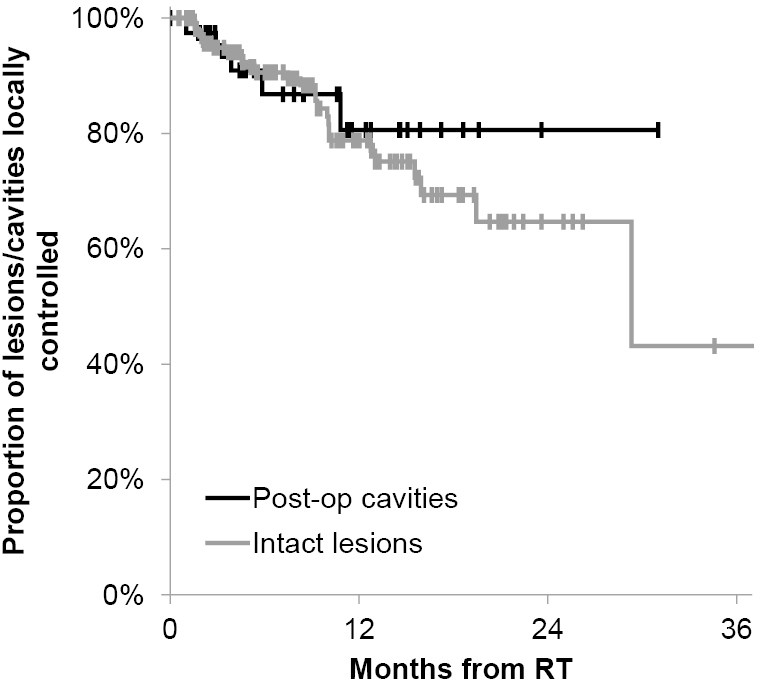 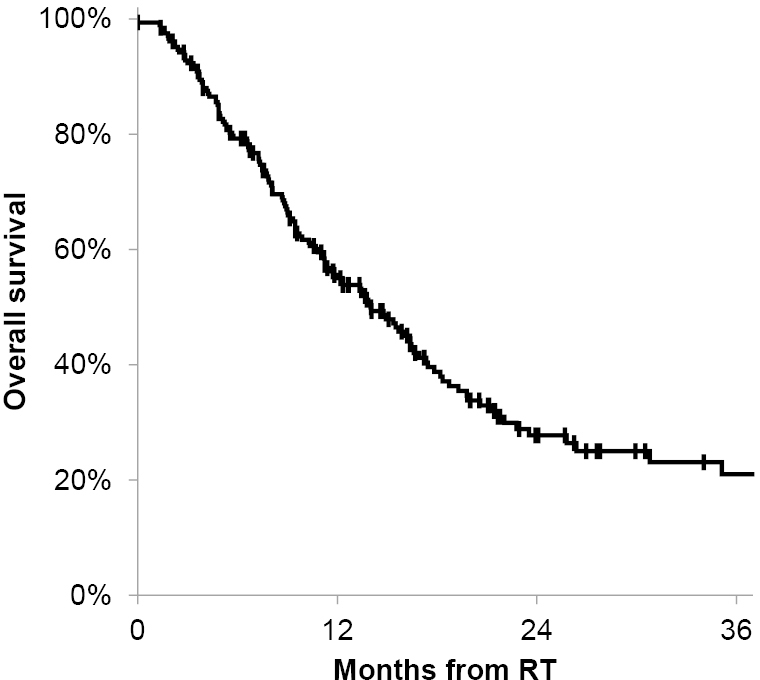 Treatments for brain metastases include surgery, WBRT or SRS, or a combination of the above. At our institution, surgery is usually reserved for single large symptomatic lesion that are located in surgically accessible locations Whole brain radiotherapy remains the standard option for treatment of brain metastases, although this technique is used less and less at our center due to the known deleterious effects in subsequent neurocognitive function (16). SRS for brain metastases has emerged as an alternative treatment for brain metastases, either as standalone therapy or in conjunction with WBRT. Several randomized trials and multi-institutional studies have shown that SRS provides highly effective local tumor control (1-4). While local control is the primary goal of SRS for brain metastases, improvement in treatment techniques, especially with LINAC-based SRS, has advanced tremendously in the past few decades. Maximizing patient comfort during treatment, while maintaining the treatment accuracy and local control, has been the focus of the new treatment technique SIG-RS. SIG-RS accomplishes this goal by providing rigorous immobilization with real-time surface-imaging guidance for treatment accuracy without the use of an invasive head frame, a closed mask, or bite-block-based system. The efficient delivery of image-guided radiosurgical treatment is achieved without detriment to the accuracy of treatment, treatment time, or clinical outcomes. Feasibility studies utilizing surface-guided imaging SRS have been previously published (12-14) including our clinical experience and outcomes of SIG-RS in 44 patients with brain metastases (115 treated lesions) treated with this novel technique (17).

In this study, we provide an update of our experience and clinical outcomes of 163 patients totaling 490 lesions and 45 post-operative cavities treated with SIG-RS. Consistent with our previous report, this study shows a 6- and 12-month actuarial local control rate of was 90% and 79%, respectively. These results are comparable to previous frame-based (18,19) and frameless (6,7) studies reporting Kaplan-Meier data showing 12-month local control rates of 71% to 89% and 76% to 80%, respectively (Table 2). In this report, the majority of patients received SIG-RS alone with four patients receiving WBRT prior to SIG-RS and 30 patients received WBRT after SIG-RS due to new lesions detected on follow-up imaging studies. Overall survival was also analyzed as an additional end point. The majority of patients, 119 of 163 patients (73%), had deceased at the time of analysis. The 12-month actuarial overall survival in this study was 56%, which is also in line with results from previously published studies of 23-54% survival for patients treated with frame-based or frameless SRS methods (Table 2). We also found no significant statistical difference in local control in SIG-RS to post-operative cavities or intact brain lesions. It is likely due to the small number of post-operative cavities treated compared to a much larger number of intact lesions treated.

Although there was no objective documentation of patient comfort during the SIG-RS treatment in this study, we observed that it was very uncommon for patients to require Ativan for anxiety and some were comfortable enough to fall as sleep during treatment. Furthermore, patients did not report any discomfort with the frameless, bite-block-less set up. An additional benefit of SIG set up is that it provides non-ionizing, real-time monitoring without dependence on the reproducibility of the infrared bite block.

Equally important is the median treatment time with SIG-RS which compares favorably to other reports of LINAC-based SRS treatment (20,21). In the high dose rate delivery mode (1,400 MU/min), typical treatment beam-on times have been reduced to the point that scheduling SIG-RS patients now occurs during a routine 15 min time slot. This time period accounts for the surface imaging setup time, the CBCT setup verification time and beam-on time. This study extends our previous findings of local control in patients with brain metastases treated with SIG-RG at our institution. With a larger number of patients and number of lesions treated, the local control remained consistent and comparable to other published studies. However, this study has several important limitations inherent to retrospective study designs, including bias in determining local failures, patient selection, and missing or incomplete follow-up. Patients treated with SIG-RS who did not have follow-up imaging studies after the treatment were excluded from analysis of local control due to lack of data.

The results of this study confirm and extend our previous findings that SIG-RS for treating brain metastases can produce clinical outcomes comparable to those for conventional frame-based and frameless SRS techniques. At the same time, SIG-RS setup provides better comfort with an open-faced mask, and allows continuous non-ionizing tracking during the treatment delivery time. We also experienced improvements in workflow using the SIG-RS procedure as the simulations, setup, and treatment are very similar to other radiotherapy treatments. Experience with SIG-RS continues to grow at our institution, and is now applied routinely to all adult and pediatric cranial radiosurgery cases.

The authors have no personal financial or institutional interest in any of the drugs, materials, or devices described in this article.