Small bowel adenocarcinoma (SBA) is usually a rare and fatal gastrointestinal malignancy, which represents a third of all small bowel cancers (1). Although rare, its incidence is rising with an estimated 10,190 new cases reported in the United States in 2017 (1-3). Due to its non-specific and heterogeneous presentation, most SBA patients are diagnosed with late-stage disease (4). Surgical resection is the optimal therapy for localized and regional disease. In patients with clinically advanced disease, several retrospective studies have demonstrated that patients receiving systemic chemotherapy attain clinical benefits with a median overall survival of 13 months when compared with only 4 months in patients with best-supportive care (4). To date, no standard treatment guideline has been established for advanced SBA. Therefore, clinical management of metastatic SBA is very challenging. However, based on multiple prospective studies, oxaliplatin-based chemotherapy regimens are most frequently used to treat advanced SBA (5,6). Recently, Horimatsu et al. reported a median progression-free survival (PFS) of 5.4 and a median overall survival (OS) of 17.3 months in Japanese patients with advanced SBA treated with mFOLFOX6 (7). Targeted agents such as bevacizumab and cetuximab have improved clinical outcomes for CRC patients, and may have clinical activity in SBA, which has high levels of vascular endothelial growth factor receptor A (VEGFR-A, 96%) and epidermal growth factor receptor (EGFR, 71%) (8). The first prospective study that evaluated the efficacy of CAPOX with bevacizumab in patients with SBA and AAC (ampullary adenocarcinoma) demonstrated an effective and well-tolerated potential therapy with a median PFS of 8.7 months and a median OS of 12.9 months (9). In addition, Aydin et al. evaluated the efficacy of bevacizumab along with the chemotherapy regimens FOLFOX and FOLFIRI and demonstrated greater clinical efficacy than chemotherapy alone (10). However, treatment outcome in advanced SBA patients is still unsatisfactory. Collaborative clinical trials are needed to improve treatment outcome in this orphan tumor. In this study, we report a case of an advanced small bowel adenocarcinoma patient with a long PFS of more than 3 years, whose treatment plan was tailored by analyzing her genetic background and drug sensitivity.

The patient agreed and signed informed consent for publication of her data. This study was carried out in accordance with the Institutional Ethics Committee of Shanghai Tenth People’s Hospital. A 70-year-old woman was transferred to Shanghai Tenth People’s Hospital complaining of right middle abdominal pain. A mass in the distal duodenum was identified after performing a gastroscopy. Pathological examination revealed poorly differentiated duodenal adenocarcinoma (Figure 1). Whole-body positron emission tomography-computed tomography (PET-CT) examination suggested multiple liver metastases (Figure S1), and the patient underwent transcatheter arterial chemoembolization (TACE) for the liver metastases. Therefore, the patient was diagnosed at stage IV. Genetic testing was performed in this patient to predict prognosis and guide clinical management. Next-generation sequencing (NGS) detected 35 gene mutations, small insertions/deletions or gene fusions related to targeted therapy or prognosis (Table S1). single-nucleotide polymorphisms (SNPs) of 13 genes associated with chemotherapy agents were also tested (Table 1). A gene test indicated that the patient was sensitive to oxaliplatin and fluorouracil. Based on the gene detection results and our experience, we treated her with palliative chemotherapy with two courses of XELOX (oxaliplatin 130 mg/m2 d1 + capecitabine 1 g/m2 d1–14 q3w). Tumor assessment by MRI showed stable disease. However, tumor markers (CA724: 42.86) were elevated. Therefore, using this information in conjunction with our experience in CRC, the patient was treated with XELOX plus bevacizumab (7.5 mg/kg) combination therapy. After 6 cycles of treatment, the patient disease status was stable with good tolerance of this regimen. Therefore, we continued this regimen as maintenance therapy with a longer treatment interval (every 4–6 weeks). Considering the neurotoxicity of oxaliplatin, stop and go policy was applied with oxaliplatin removed from cycle 16 to cycle 30 and added again in the next 10 cycles. After 20 courses of regimens (January 24, 2013 to June 18, 2014), the CA724 tumor marker decreased and was stable with continued treatment until disease progression (Figure 2). The treatment was well-tolerated with limited adverse effects. Totally, the patient underwent 40 cycles XELOX plus bevacizumab using stop and go policy for more than 3 years with stable disease from January 24, 2013 to November 24, 2016. The patient experienced Grade 3 proteinuria and Grade 2 neurotoxicity. An MRI scan on January 9, 2017 revealed disease progression of the liver lesions (Figure 3). Therefore, the patient received two courses of bevacizumab plus tegafur, gimeracil, and oteracil potassium capsules (50 mg BID d1–14) with irinotecan (180 mg/m2). She then underwent one course of high-intensity focused ultrasound (HIFU) therapy for the liver lesions. As shown in Table S1, no KRAS or BRAF mutations were detected, and therefore, the patient received targeted therapy with cetuximab (500 mg/m2 q3w) combined with irinotecan with a PFS of 10 months. However, the patient progressed again in January 2018. She was then treated with regorafenib, which is a third-line treatment option for patients with metastatic colorectal cancer. The patient died three months later because of a heart attack. 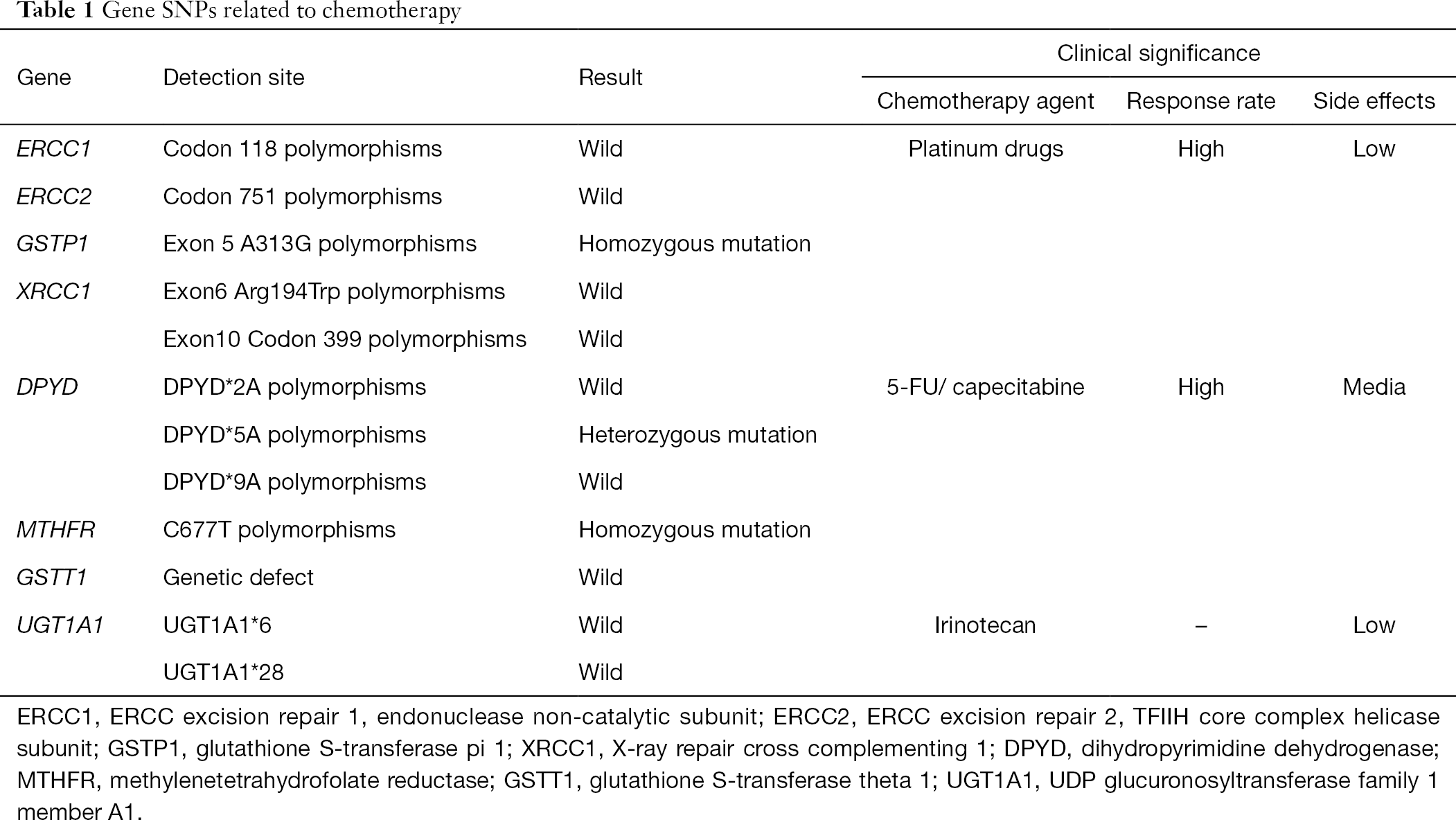 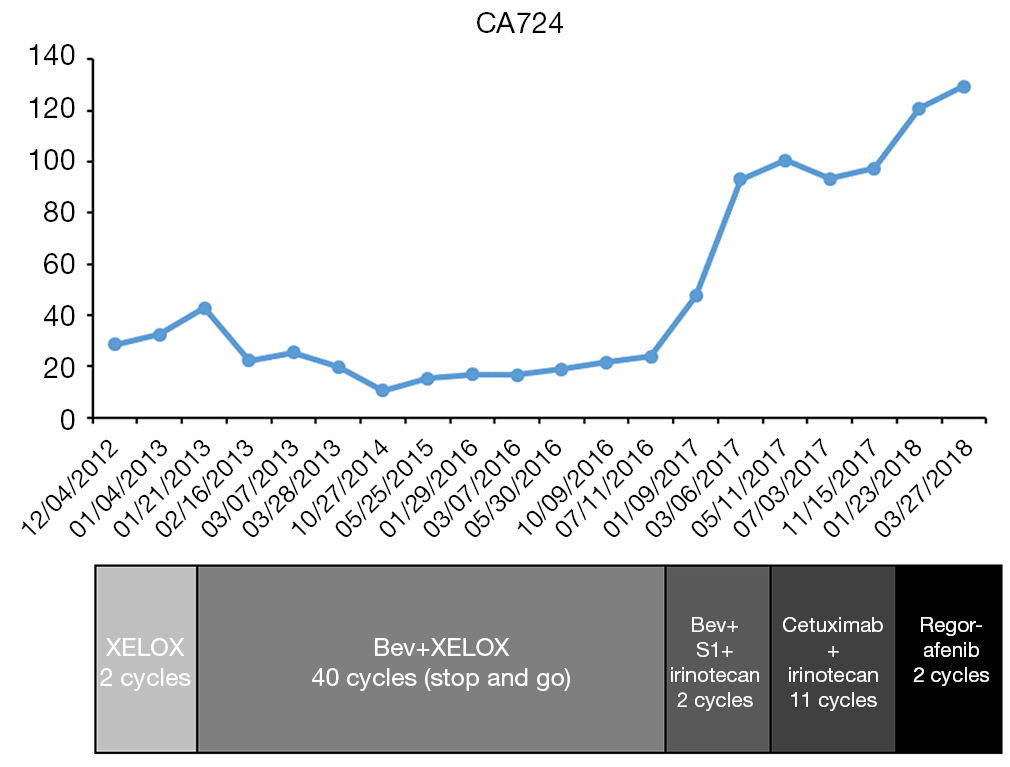 The treatment deficiency and rarity of SBA have hampered the understanding of the molecular factors that drive this malignancy and have resulted in poor patient outcomes. In the past, the treatment regimen for advanced colorectal or gastric cancer has been applied to advanced SBA. However, there are significant molecular differences in these tumor types, which call for distinct treatment strategies. Currently, there is no standard of care for the treatment of advanced SBA. Current therapies have been guided by phase II and retrospective studies. Therefore, randomized clinical trials are sorely needed to guide treatment and improve outcome. To date, there have been no randomized clinical trials comparing the effectiveness of different chemotherapy regimens in SBA. However, phase II prospective studies have recommended the use of either CAPOX or FOLFOX as the standard first-line therapy for SBA (7).

Due to the lack of references regarding chemotherapy sensitivity in SBA, we chose a chemotherapy regimen based on colorectal cancer data. Several genes, including nucleotide excision DNA repair cross-complementation groups 1 and 2 (ERCC1 and ERCC2), glutathione S-transferase (GSTP1), and X-ray cross-complementing group 1 (XRCC1), carry well-known polymorphisms associated with oxaliplatin-based chemotherapy toxicity (11). This patient had GSTP1 313A>G in exon 5, which was reported to be associated with reduced enzyme activity, anticancer drug resistance, and oxaliplatin toxicity. Multiple studies have demonstrated that ERCC1 codon 118 polymorphism may affect the mRNA and its protein expression levels, resulting in differences in platinum sensitivity and clinical outcome (12). Improved clinical outcome and higher platinum sensitivity have been seen with ERCC1-118 C/C homozygote genotype. For ERCC2, patients with A/A (Lys/Lys) genotype at codon 751 were associated with better response, longer PFS and OS in comparison to those with C/C and the heterozygous A/C (13). Patients carrying Gln mutant allele at codon 399 of XRCC1 (heterozygous plus homozygous) were more likely to experience unsuccessful chemotherapy with 5-FU/oxaliplatin due to resistance (14). Based on this information, we surmised that this patient was sensitive to oxaliplatin. Genes with SNPs associated with fluorouracil-induced toxicities include DPYD and MTHFR. The most relevant polymorphism in DPYD is DPYD*2A. DPYD*5A and DPYD*9A mutants also frequently occur in the Chinese population (15). All the mutants can lead to higher toxicity of fluorouracil because of reduced enzyme activity. This patient had a heterozygous DPYD*5A mutant, but we did not observe obvious adverse effects of fluorouracil. In vitro, MTHFR 677T mutation in CRC increased 5-FU activity and MTHFR 677 CT+TT genotypes were associated with improved OS compared with those the MTHFR 677 CC genotype (16). In this patient, 5-FU-based chemotherapy was beneficial and well tolerated.

Nevertheless, VEGF-A (96%) and EGFR (71%) expressions are high in SBA (8). A limited number of case reports have documented encouraging results with the addition of targeted therapy to chemotherapy for the treatment of SBA. A dynamic case report recently demonstrated imperative results in patients with advanced SBA treated with bevacizumab in combination with gemcitabine and oxaliplatin, and finally maintained on bevacizumab plus capecitabine (17). Another case report showed prolonged disease-free survival in one patient with recurrent SBA after treatment with bevacizumab in combination with FOLFOX-6 (18). In addition, Takayoshi et al. reported chemotherapy in combination with bevacizumab has provided a favorable result when compared to chemotherapy alone (19). Therefore, a combination of bevacizumab and chemotherapy may be an option for advanced small bowel adenocarcinoma. Prospective studies are now in progress to explore multiple targeted therapies in advanced small bowel adenocarcinoma. There are also a few case reports, which have indicated that anti-epidermal growth factor receptor therapy (e.g., cetuximab and panitumumab) may be effective in SBA (20,21). A PFS of 19 months was achieved with panitumumab as a maintenance therapy (22). In our case, the patient chose bevacizumab as initial target treatment due to financial constraints. And she also benefited from cetuximab when she progressed with bevacizumab.

In comparison to large bowel cancer, the genetic changes of which have been well investigated, little research has been done on the carcinogenesis of small bowel cancer. The genetic alterations principal to colorectal cancer carcinogenesis have been investigated in SBA. A cohort study of 194 patients with SBA indicated that aberrant activation of the Wnt/APC and β-catenin pathway was correlated with poor prognosis. However, mutations in adenomatous polyposis coli (APC) occur in only 10–15% of cases of sporadic SBA (23). Loss of the distal 18q including the SMAD4 and DCC genes occurs in approximately 73% of sporadic colorectal cancers and 47% of SBA. In contrast to DCC, mutations in the tumor suppressor gene SMAD4, which is involved in the TGF-β signaling pathway, are more common in small bowel adenocarcinomas (30%) (24). The prevalence of KRAS mutations in sporadic SBA is 40–60%, comparable to that in colorectal cancers. However, BRAF V600E mutations are rare in SBA. In addition, tumor protein 53 (TP53) gene mutations and p53 isoform overexpression are seen in 30–60% of SBA. TP53 mutations are associated with poor survival. Laforest et al. showed that 12% of SBA patients had a tumor alteration in HER-2 (25). Genetic testing of this patient was performed to aide prediction of prognosis and clinical management of the disease. No mutations were detected in APC, KRAS, NRAS, BRAF, TP53, and HER-2. The genetic makeup of this patient may have influenced her treatment response and contributed to her better prognosis.

Our case indicates the potential effective therapy of XELOX plus bevacizumab for SBA. This case report is the first to explore the efficacy of bevacizumab in combination with XELOX as a maintenance therapy. The sustained clinical benefit was observed in a patient with advanced SBA, who showed long PFS for more than three years. The adverse effect was limited to proteinuria without life-threatening adverse effects, such as bleeding and bowel perforation. Due to the long-term PFS, XELOX plus bevacizumab may be considered as an excellent choice for the treatment of SBA in the metastatic setting. However, large-scale randomized clinical trials are needed to evaluate the effectiveness and the safety of this chemotherapy regimen.

Funding: We thank LetPub (www.letpub.com) for its linguistic assistance during the preparation of this manuscript. This work was supported by National Natural Science Foundation of China Grant NO. 81702311and 81772905); Fundamental Research Funds for the Central Universities (Grant No. 22120180044); Shanghai Municipal Committee for health and family planning (Grant No. 201640020); Shanghai Municipal Science and Technology Commission (Grant No. 16431903200 and 17411967300).