Multidisciplinary evaluation of locally advanced leiomyosarcoma in the lower rectum: a case report and literature review

Leiomyosarcoma of the rectum is a rare neoplasm that accounts for fewer than 0.1% of all rectal malignancies (1). With the discovery in 1998 of CD117, a symbolic marker of gastrointestinal stromal tumor (GIST), leiomyosarcoma could be accurately diagnosed (2). Only a few studies with long-term follow-up data are available for the optimal treatment of rectal leiomyosarcoma. The prognostic factors related to tumor progression and the survival of patients are not well known. Because of the uncommon localization, we add another case of locally advanced leiomyosarcoma in the lower rectum to the literature and will review the available data in the literature.

A 47-year-old man from southern China was admitted to the hospital in May 2016 and presented with anal bleeding and lower abdominal pain that sustained for two months. He had a medical history of hypertension and type II diabetes mellitus, no surgical history and a family history of genetic diseases. A digital rectal examination revealed a large rectal mass in the posterolateral wall that could not be moved, and the mass was approximately 3 cm from his anal margin. Colonoscopy showed a large submucosal lesion at the lower rectum that was partially ulcerative but mainly had normal mucosa. Contrast-enhanced computed tomography (CT) showed a large mass at the lower rectum with a diameter of 8.0 cm, and there was no evidence of lung or liver metastases. Pelvic magnetic resonance imaging (MRI) revealed an approximately 8.0 cm heterogeneous mass in the rectum invading the fascia and the perirectal tissue, with no perirectal lymph node metastasis, a positive circumferential resection margin (CRM ≤1 mm) and extramural vascular invasion (Figure 1). Serum CA 125, CEA and CA 19-9 concentrations were at normal levels. Other laboratory examinations were within normal ranges. The histological examination of the biopsy specimen showed a spindle cell neoplasm, G2, and a Ki-67 level of 30%. Immunohistochemical analysis showed position desmin, caldesmon and SMA staining, while the staining for CD117, CD34, S-100, myosin and DOG-1 were negative (Figure 2). All these results were consistent with the diagnosis of rectal leiomyosarcoma. 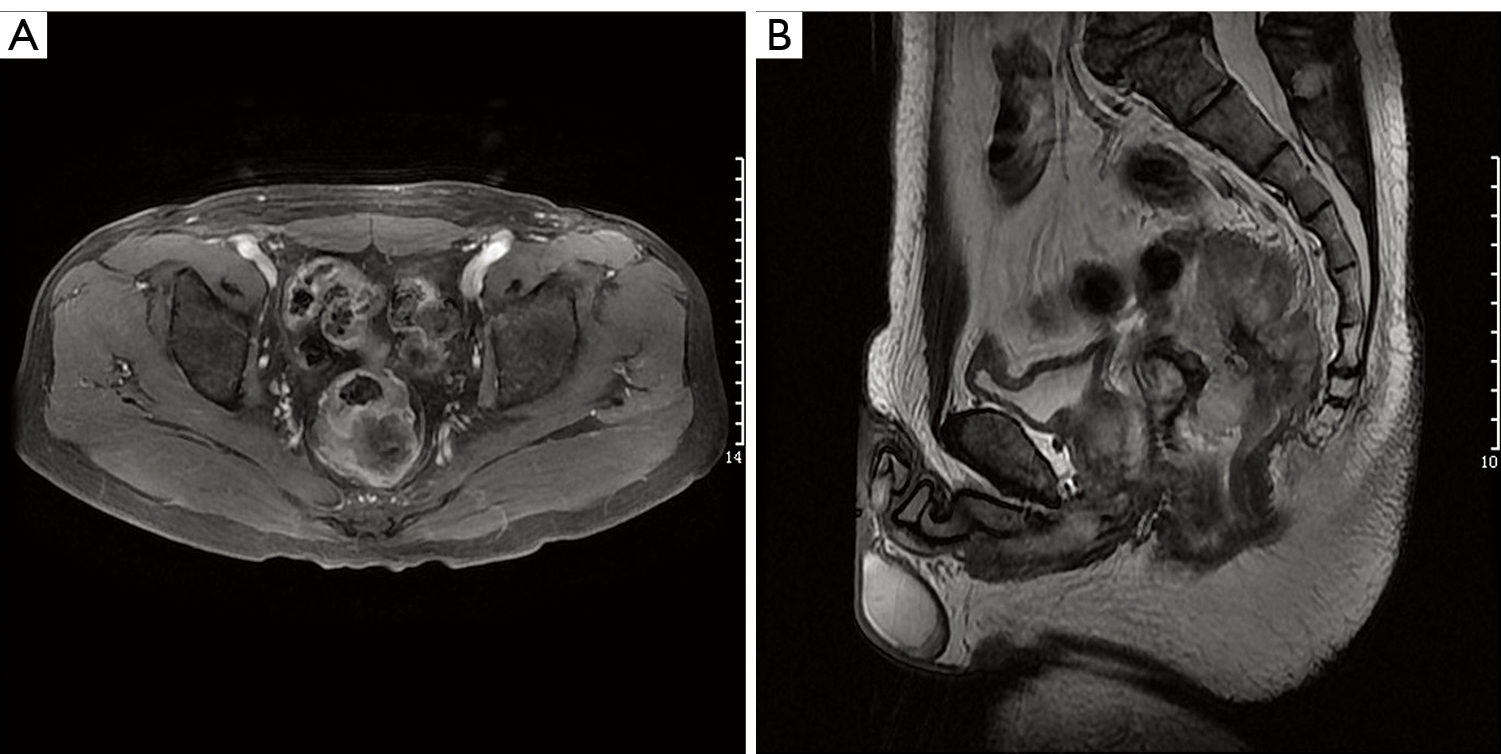 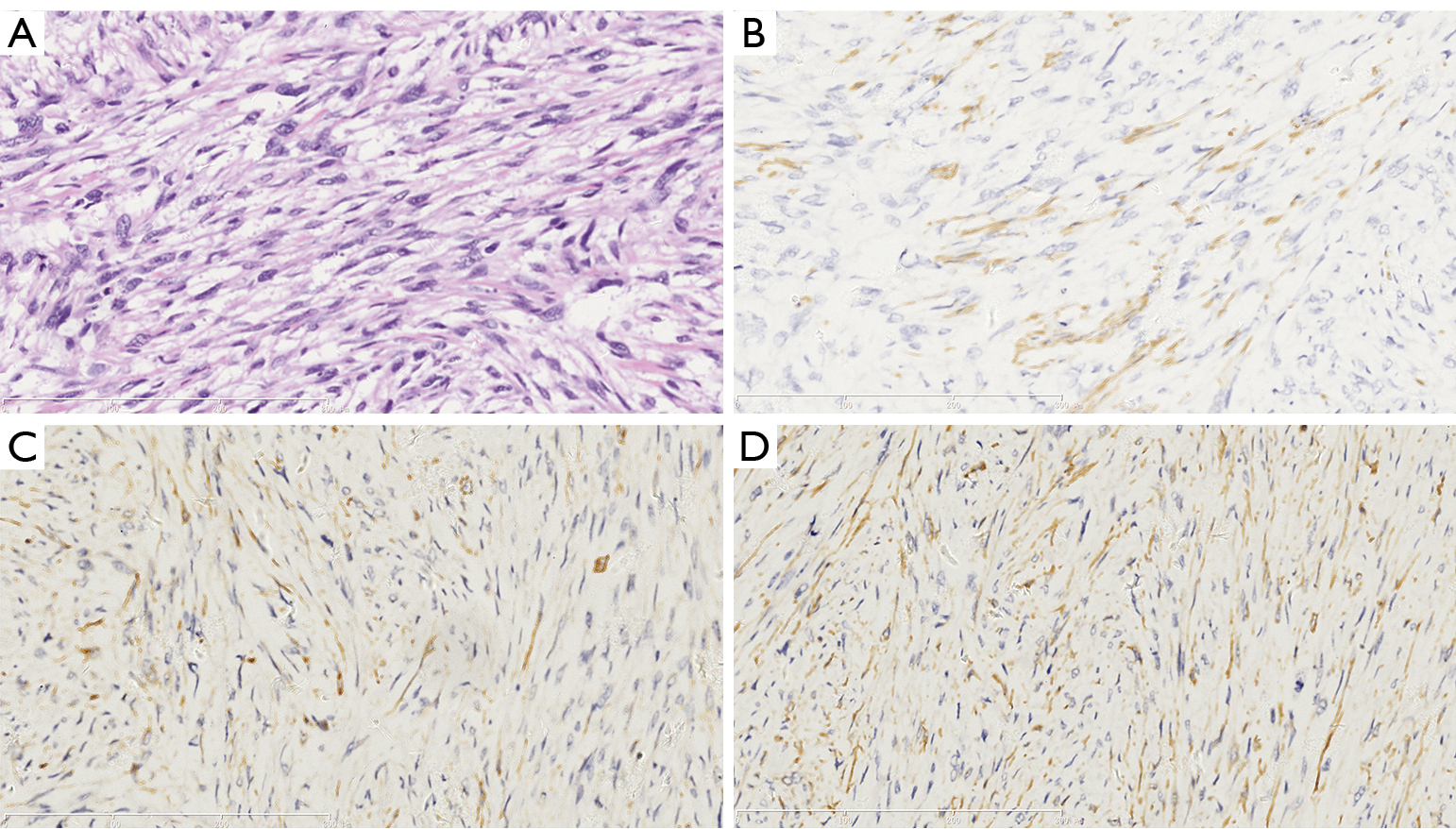 Because of the primary tumor size and positive CRM, this case was first discussed by an MDT. Preoperative pelvic short-course radiotherapy was indicated to reduce local recurrence. Radiotherapy with a total dose of 25 Gy was administered in 5 fractions of 5 Gy each with intensity-modulated radiotherapy. One week after radiotherapy, the patient underwent an abdominoperineal resection of the tumor by a total mesorectal excision. There was no residual macroscopic tumor tissue in surgery despite the large tumor located within a narrow pelvic space. Pathological examination of the resected specimen found that the tumor had invaded from the mucosa to the tunica adventitia, with a negative surgical margin and without vascular and perineural invasion. No lymph node metastases were found. The histological and immunohistochemical findings were the same as those with the preoperative biopsy specimen. During postoperative recovery, the patient suffered complications, including an incision infection and dysuria. The patient was discharged 22 days after the operation.

The second multidisciplinary evaluation was conducted after the resection, and adjuvant chemotherapy was suggested because of the young age of the patient and the advanced tumor, as well as his own willingness. The patient completed 4 cycles of chemotherapy (doxorubicin and ifosfamide), and the total course lasted for 3 months. After systemic therapy, regular follow-ups were performed every 3 months. Unfortunately, 13 months after the resection, the CT and MRI scans showed a local pelvic recurrence and no signs of distant metastasis (Figure 3). Subsequently, a third discussion was held by the MDT. Considering the large range of the tumor and extra radiotoxicity to part of small intestine, there was no opportunity for reoperation or more radiation therapy; thus, second-line chemotherapy was suggested. The patient completed 4 cycles of chemotherapy (gemcitabine and docetaxel), and the total course lasted nearly 4 months. CT imaging and MRI showed disease progressed after 5 months, and the patient suffered from symptoms of ureteral compression. A fourth multidisciplinary evaluation was conducted, and a renal puncture and drainage was suggested to relieve the ureteral obstruction. Radioactive particle implantation was carried out to control local progression, and the anatomical relationships between the tumor and the surrounding tissue as well as the positions and number of radioactive particles implanted were clarified using the treatment planning system (TPS). A total of 80 cores containing 125-I particles were inserted by needle into the tumor center at 20 predetermined sites. Moreover, apatinib (an oral tyrosine kinase inhibitor) was administered to gain systemic control. The patient was in a stable condition for nearly 4 months. Subsequently, the best supportive care was provided for the patient. The patient died 24 months after the diagnosis.

Leiomyosarcomas are malignant mesenchymal neoplasms composed of cells that originate from smooth muscle lineages (3). The most common locations are the retroperitoneum, lower extremities, and the uterus. Leiomyosarcoma of the rectum is a rare neoplasm that accounts for fewer than 0.1% of all rectal malignancies. With the discovery in 1998 of CD117, a symbolic marker of gastrointestinal stromal tumor (GIST), leiomyosarcoma could be accurately diagnosed. Rectal leiomyosarcoma originates from the muscularis mucosa, muscularis propria, and walls of blood vessels. Leiomyosarcomas may grow into the mucosa or into the perirectal tissues (4). People aged 50–60 years old are susceptible to the disease. Hoshino et al. (5) reported that there were only 10 cases of rectal leiomyosarcoma in the English language literature from 1998 to 2017, including three men and seven women. The median age was 65 years, ranging from 24 to 88.

A pretreatment biopsy should be performed by a professional radiologist or surgeon. The biopsy should minimize contamination and complications, and the excision should be safely removed from the biopsy pathway (7). The histology of leiomyosarcoma is characterized by a dense array of spindle cells with elongated and blunt nuclei. Nuclear hyperchromasia and pleomorphism are generally characteristic patterns. The cytoplasm varies from typically brightly eosinophilic to pale. Necrosis, hemorrhage and cystic degeneration may be frequently observed (8). In the immunohistochemical examination, staining for SMA, desmin and h-caldesmon is positive in the great majority of the specimen (>70%), while staining for CD117, CD34, S-100 and DOG-1 are negative in leiomyosarcomas (9).

As reported by the American Joint Committee on Cancer (AJCC) staging system for soft tissue sarcomas, the histologic grade, tumor size, and tumor depth are three clinicopathologic risk factors for leiomyosarcomas (10). In terms of the histologic grade, the Federation Nationale des Centres de Lutte Contre le Cancer (FNCLCC) distinguishes the malignancy grade based on the three factors of differentiation, necrosis and mitotic rate (11). However, the staging of rectal leiomyosarcoma has not been determined because of its rarity. Yamamoto et al. (4) reported that tumor size (≥5 cm) was significantly associated with a poor prognosis. They also suggested that the tumor depth and necrotic area might affect the prognosis. Yeh et al. (12) stated that young age (<50 years) and high histologic tumor grade were the two independent prognostic factors for rectal leiomyosarcoma. In our case, young age, tumor size and tumor depth could be the explanatory factors for the poor prognosis.

Due to the rarity of rectal leiomyosarcoma, only a few case reports and minimal relevant data could be found in the literature. The standard treatment for rectal leiomyosarcoma remains to be resolved. Surgery is the fundamental treatment for rectal leiomyosarcomas, but surgery alone is inadequate for locally advanced tumors. It is reported that radiotherapy and chemotherapy have been proven efficacy as perioperative therapy though the efficacy was not remarkable. An MDT consisting of several specialists was essential in the management of this patient. In our department, MDT meetings for colorectal malignant tumors have been established, and the committee includes surgical oncologists, medical oncologists, radiation oncologists, pathologists and radiologists. A dedicated discussion of the relevant clinicopathological and imaging data should be held regularly.

Surgical approaches, including radical surgery, such as anterior resection, abdominoperineal resection, and local excision should aim to achieve macroscopically complete resection and microscopically minimal positive margins. Radical surgery is associated with a lower recurrence rate than wide local excision. Khalifa et al. (13) found a local recurrence rate of only 19.5% with radical resection, compared to 67.5% with local excision, but there were no differences in overall survival between the two modalities. Hoshino et al. (5) reported that a lower rectal leiomyosarcoma was moved by the hybrid method combining both the laparoscopic and transanal total mesorectal excision (TaTME) approaches because of the large tumor size and narrow pelvic space. In our case, a laparoscopic-assisted abdominoperineal resection was performed for the patient.

There is no accordance on the role of postoperative chemotherapy for leiomyosarcoma at present. Adjuvant chemotherapy may be an option for high-risk patients. Only two agents have been confirmed to be effective as general first-line chemotherapy, doxorubicin and ifosfamide. When leiomyosarcoma relapses or distant metastasis occurs, a poor prognosis is likely. In retrospective trials, the median progression-free survival (PFS) was approximately 6 months, and the overall survival (OS) was approximately 12 to 15 months for patients treated with doxorubicin and ifosfamide (16). According to the SARC002 study (17), the combination of a fixed-dose rate infusion of gemcitabine with docetaxel has been documented to be effective against pretreated leiomyosarcomas and leads to a median PFS and OS of 6.2 and 17.9 months, respectively. García-Del-Muro et al. (18) demonstrated the feasibility and efficacy of a fixed-dose rate of gemcitabine plus dacarbazine against pretreated leiomyosarcomas and achieved a median PFS and OS of 4.9 and 13.8 months, respectively, in a randomized phase II trial. Trabectedin has been explored and has shown a high rate of disease control (with 26–30% progression-free survival rates at 6 months), particularly in patients with leiomyosarcomas pretreated with doxorubicin and ifosfamide (19). Trabectedin is currently available in Europe and some other countries but is not yet available in China. Apatinib, an oral tyrosine kinase inhibitor that targets vascular endothelial growth factor receptor-2, was given to patients with advanced sarcoma. Zhu et al. (20) reported that the objective response rate was 33.3%, and the clinical benefit rate was 75.0%. The progression-free survival was 4.25 months, and the overall survival was 9.43 months. Compared with other histological subtypes, leiomyosarcoma did not show more significant survival benefits.

In the preoperative, postoperative, recurrent and progressive stages, four MDT discussions were conducted. Based on the accurate analysis of clinicopathologic information and a review of the literature and guidelines, the appropriate treatment was established by several specialists. Although the patient was ultimately not cured, the optimal therapeutic strategy was carried out for each disease stage, as discussed by the MDT. Through the application of a comprehensive management strategy, this patient with locally advanced leiomyosarcoma achieved a better PFS and OS than patients reported in the literature.