Diffuse large B-cell lymphoma (DLBCL) is the most common histological subtype of non-Hodgkin lymphoma (NHL), accounting for approximately 30% of all NHL patients (1,2). Although substantial progress has been made in DLBCL treatment, 50% of DLBCL patients will become refractory or will relapse after treatment (3). High-dose chemotherapy combined with autologous stem cell transplantation (ASCT) has become the standard treatment for patients with relapsed/refractory (R/R) DLBCL (4). However, the prognosis of patients with R/R DLBCL is still unsatisfactory. The median survival time is only 6.3 months, and only 20% of patients survive at 2 years (5).

Relapsed lymphoma was defined as DLBCL in the presence of any new lesion after the initial complete remission (CR). Refractory lymphoma was defined as meeting any of the following: (I) tumor shrinkage <50% or disease progression (DP) after completion of four courses of standardized chemotherapy; (II) CR achieved after standard chemotherapy but tumor relapse within 6 months; (III) tumor relapse at least twice after CR or (IV) relapse after hematopoietic stem cell transplantation.

We retrospectively analyzed 32 patients with R/R DLBCL undergoing salvage RT between January 2009 and June 2016 in our hospital. This study was approved by the Ruijin Hospital Ethics Committee of the Shanghai Jiao Tong University School of Medicine. The need for individual consent was waived by the committee due to the retrospective nature of the study; and data are entered directly onto a database which will not contain personal information. The median follow-up duration of all patients was 25.4 months, with a range of 0.4–98.9 months. We acquired patient treatment, relapse and survival status through follow-up data and analyzed different factors including age, International Prognostic Index (IPI) score, tumor location, staging, chemotherapy regimen prior to RT, RT dose and adverse reactions. Among the 32 patients, 16 were male (50.0%) and 16 were female (50.0%). The median age was 47 years (range, 13–85 years). Pathology confirmed that the primary tumor in all patients was DLBCL. Immunohistochemistry showed CD20-positive reactivity. Overall, 28 patients had refractory DLBCL, and four patients had relapsed DLBCL. At the initial diagnosis, 1 patient was at stage I (3.1%), 12 patients were at stage II (37.5%), 9 patients were at stage III (28.1%), and 10 patients were at stage IV (31.3%). The median IPI score of all patients was 3 points (range, 0–4). Twenty patients (62.5%) had large tumors. At the time of initial diagnosis, all patients received first-line chemotherapy based on CHOP (cyclophosphamide + adriamycin + vincristine + prednisone), and 27 patients also received first-line rituximab targeted therapy. The median number of courses of chemotherapy was 6 (range, 2–16). Chemotherapy regimens mainly included CHOP, ICE (ifosfamide + carboplatin + VP16) and DHAP (cisplatin + cytarabine + dexamethasone). The clinicopathological characteristics of the 32 patients are shown in Table 1.

SPSS 19.0 software was used for statistical analysis. The Kaplan-Meier test and the log-rank test were used for univariate analyses. The Cox regression test was used for multivariate analysis to determine the association between clinicopathological characteristics and relapse type. P<0.05 was considered statistically significant. 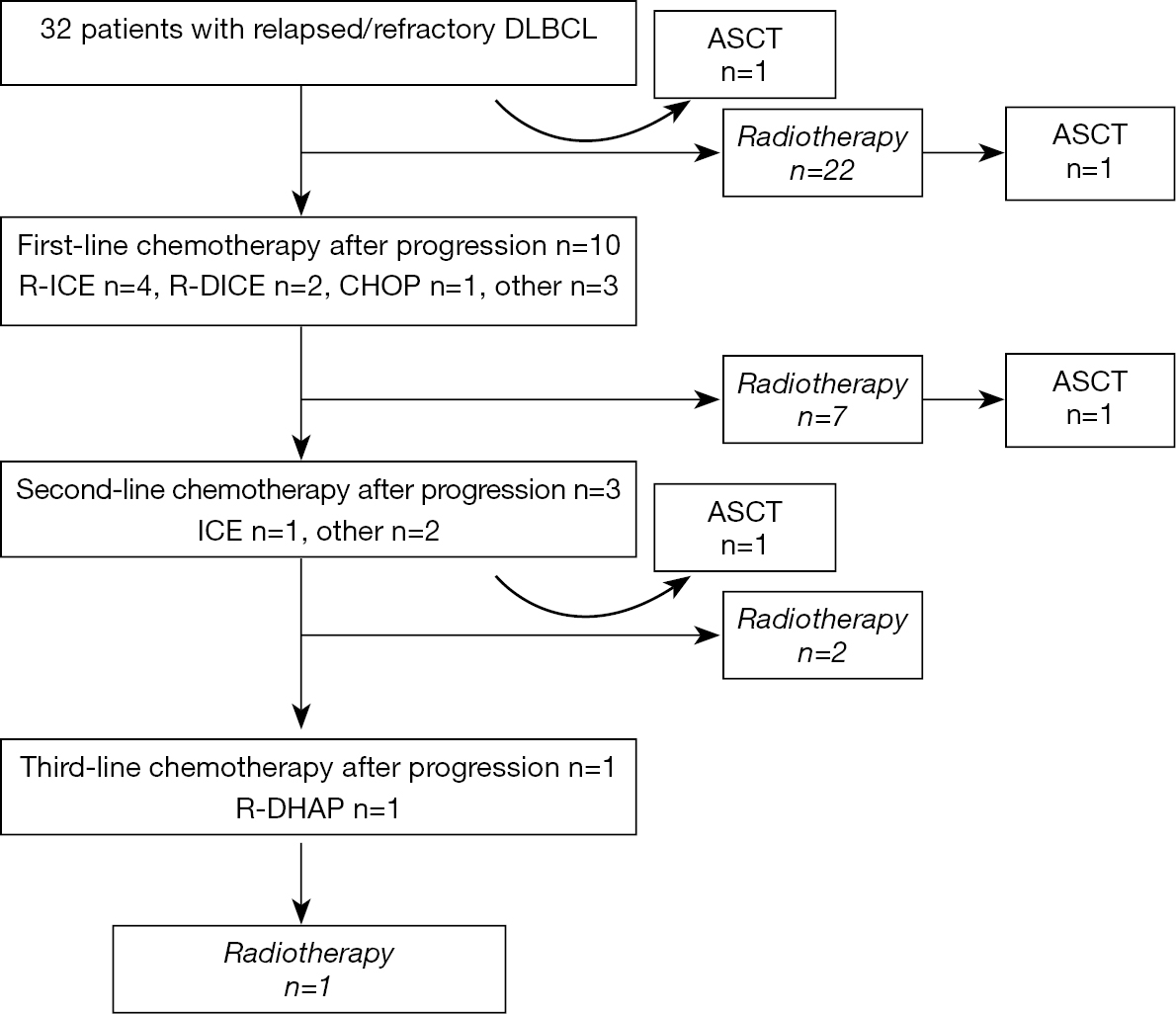 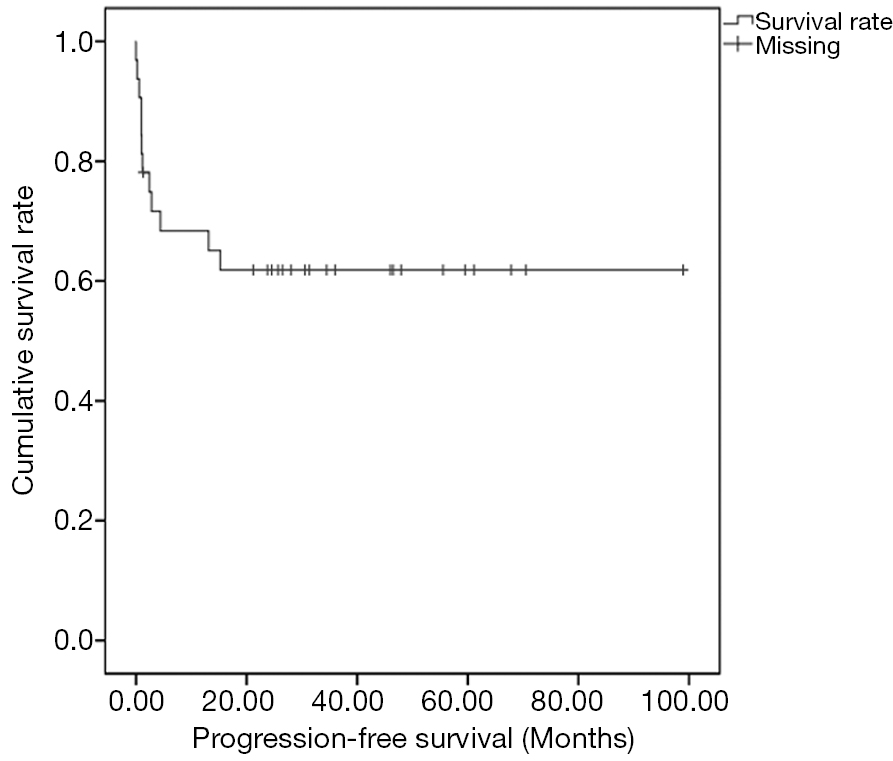 The relationship between clinicopathological factors and survival 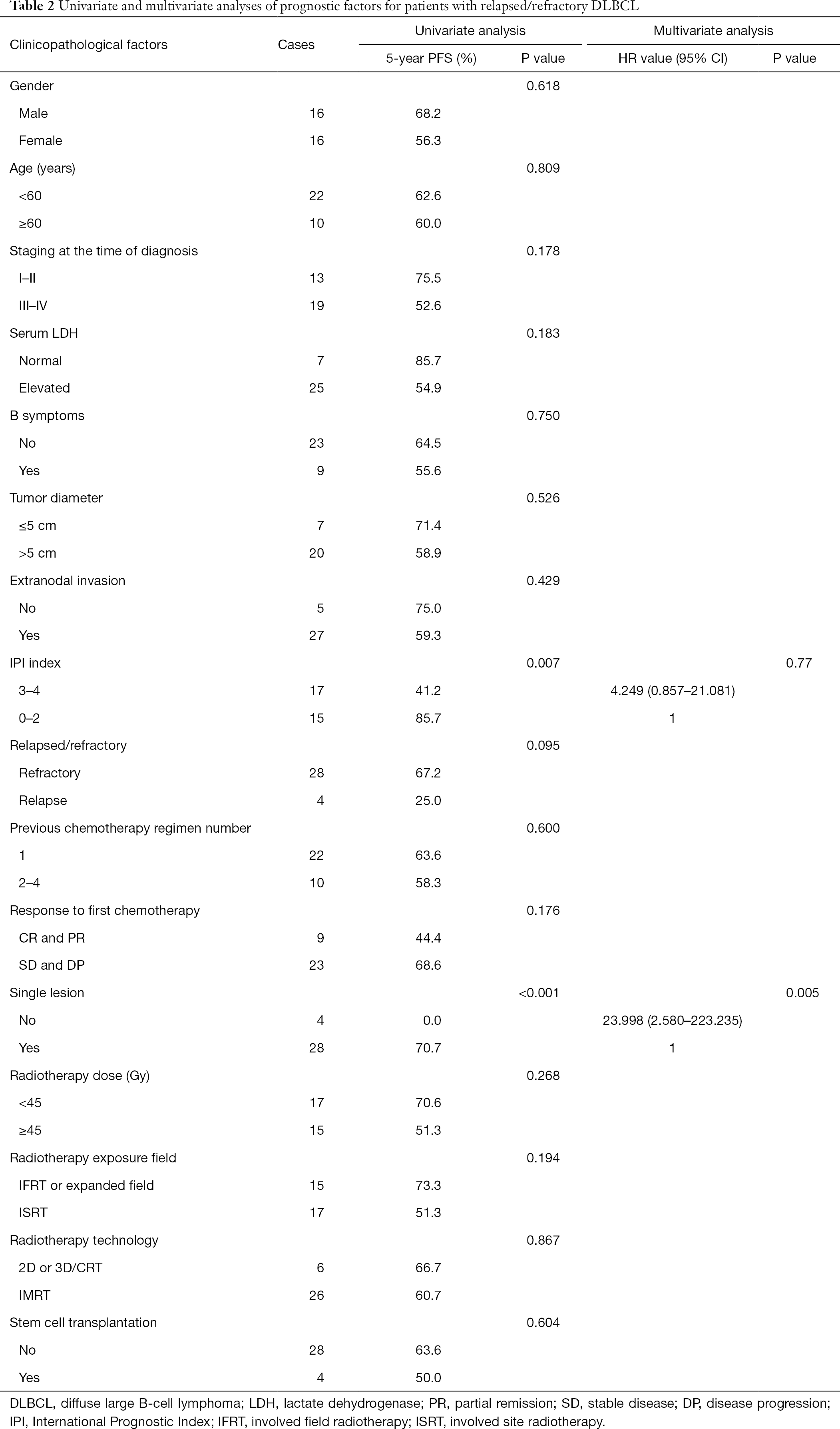 Toxic reactions in most patients at the early stage of RT were mild. Seven patients (21.9%) were at Common Terminology Criteria for Adverse Events (CTCAE) level 1, and seven patients (21.9%) were at CTCAE level 2. Adverse reactions mainly included neutropenia, diarrhea, dermatitis, mucositis and dysphagia. One patient had grade 3 neutropenia. There were no significantly long-term toxic reactions.

Although substantial progress has been made for the treatment of DLBCL, the majority of patients cannot be cured through regular treatment. High-dose chemotherapy combined with ASCT can improve survival and is currently the standard treatment for patients with R/R DLBCL (4). However, less than 10% of patients achieve long-term disease-free survival after second-line treatment (7). For patients with R/R DLBCL who are not suitable for direct ASCT second-line salvage treatment is still the primary option. Therefore, exploration of an economical salvage treatment plan with high efficiency and low toxicity has extensive clinical applications (8).

High-dose chemotherapy combined with ASCT can improve CR and OS rates (9). In the current study, four patients underwent ASCT: two prior to RT and two after RT. Two of these four patients (50%) had CR. However, currently, prospective evidence is still lacking for RT indications of patients with R/R DLBCL undergoing ASCT and the sequence for RT and ASCT (10,11). In most studies, patients with large tumors or with large lesions after chemotherapy undergo RT, including preventive RT (11,12). Therefore, the indications, dosage and reactions of RT are not clear. However, we found from previous studies that RT both prior to and after ASCT are beneficial for local control and may also extend PFS and OS (10,11,13,14). The main advantage of RT is the improvement of local control, which significantly reduces the relapse rate prior to and after transplantation (10,12). This advantage still exists in the era of anti-CD20 monoclonal antibodies. Although currently relevant studies on dose comparison are lacking, the effective dose of RT is approximately 30–40 Gy. The data in our study also showed that RT doses higher than 45 Gy did not further extend survival. Additionally, IFRT did not increase RT-related toxicity.

IPI has always been a recognized prognostic criterion for DLBCL, including age, ECOG score, Ann Arbor staging, lactate dehydrogenase (LDH) levels and degree of extranodal involvement. IPI is still a powerful prognostic indicator in the anti-CD20 monoclonal antibody era (15). Univariate analysis of the patients in this study showed that moderate to high risk in the IPI score was a negative factor for PFS. However, in the following multivariate analysis, we did not identify any correlation between IPI and PFS. An unpublished trial, DSHNHL 2004-3, assessed the effects of consolidative RT in patients aged 18–60 years with IPI scores of 1 or 0 and large tumors (>7.5 cm). This trial assessed consolidative RT after chemotherapy and found that the prognosis of patients without RT was significantly poorer than patients undergoing RT, indicating that RT may be beneficial for patients with low IPI scores. Due to the limited sample size in this study, our finding should be confirmed by studies with larger sample sizes.

A single-center study retrospectively analyzed 110 patients who underwent RT due to R/R invasive NHL and assessed the reaction rate and time to local relapse. In that study, 77% of the patients had DLBCL (16). Approximately 85% of tumors entered remission after a median radiation dose of 37.8 Gy, and 66% of tumors were under local control at 5 years. In our study, the 5-year PFS and OS of the 32 patients were 61.8% and 83.2%, respectively, which is similar to the previous study. Thus, we conclude that RT may improve the prognosis of patients with R/R DLBCL.

Although this is a retrospective study with limited sample size, our analysis showed that salvage therapy may extend survival with mild adverse reactions for strictly selected patients with R/R DLBCL, such as patients with a single isolated residual or relapsed lesion. Prospective studies with larger sample sizes are needed to confirm our finding.

Ethical Statement: This study was approved by the Ruijin Hospital Ethics Committee of the Shanghai Jiao Tong University School of Medicine. The need for individual consent was waived by the committee due to the retrospective nature of the study.