Esophageal cancer (EC) is one of the most fatal malignant tumors globally, with a 5-year survival rate of 15–25% (1-3). With the improvement in diagnostic techniques, there are more than 50% patients detected at metastatic stage with incurable metastatic disease at diagnosis. For metastatic EC with distant metastasis, systematic chemotherapy is recommended as the standard therapy, however, the overall survival (OS) is still poor. External beam radiotherapy has been performed in the management for EC as definitive, preoperative, postoperative, or palliative therapy combining with chemotherapy (4-7). For patients with metastatic EC, radiotherapy is used as a palliative treatment modality to relieve symptoms such as dysphagia and chest pain (8,9). However, the effect of radiotherapy on survival of patients with metastatic EC is unclear.

The purpose of this study was to assess the impact of radiotherapy on the OS of metastatic EC based on the data available in the Surveillance, Epidemiology, and End Results (SEER) database, attempting to provide a novel concept for the change of traditional treatment modality to metastatic EC.

The SEER database, one of the largest databases of oncology patients in the United States, includes cancer incidence, treatment, and survival information for approximately 30% of the US population. SEER*Stat software version 8.3.5 was used and SEER data between 1973 and 2014 [“Incidence-SEER 18 Regs Custom data (with additional treatment fields), Nov 2016 sub (1973–2014 varying)”] was chosen for this study. Adult patients diagnosed with EC who had metastatic diseases between 2010 and 2014 (n=5,912) were enrolled. Patients treated with beam radiation (combined with or without other type of radiotherapy) were included in the cohort. Patients with unknown radiotherapy data were excluded (n=65). Patients for whom the presence of follow-up was unknown were not included (n=7). In addition, patients who were presented with “N/A not first tumor” were excluded (within SEER database) (n=1,079). All authors did not have access to information that could identify individual participants (Figure 1). 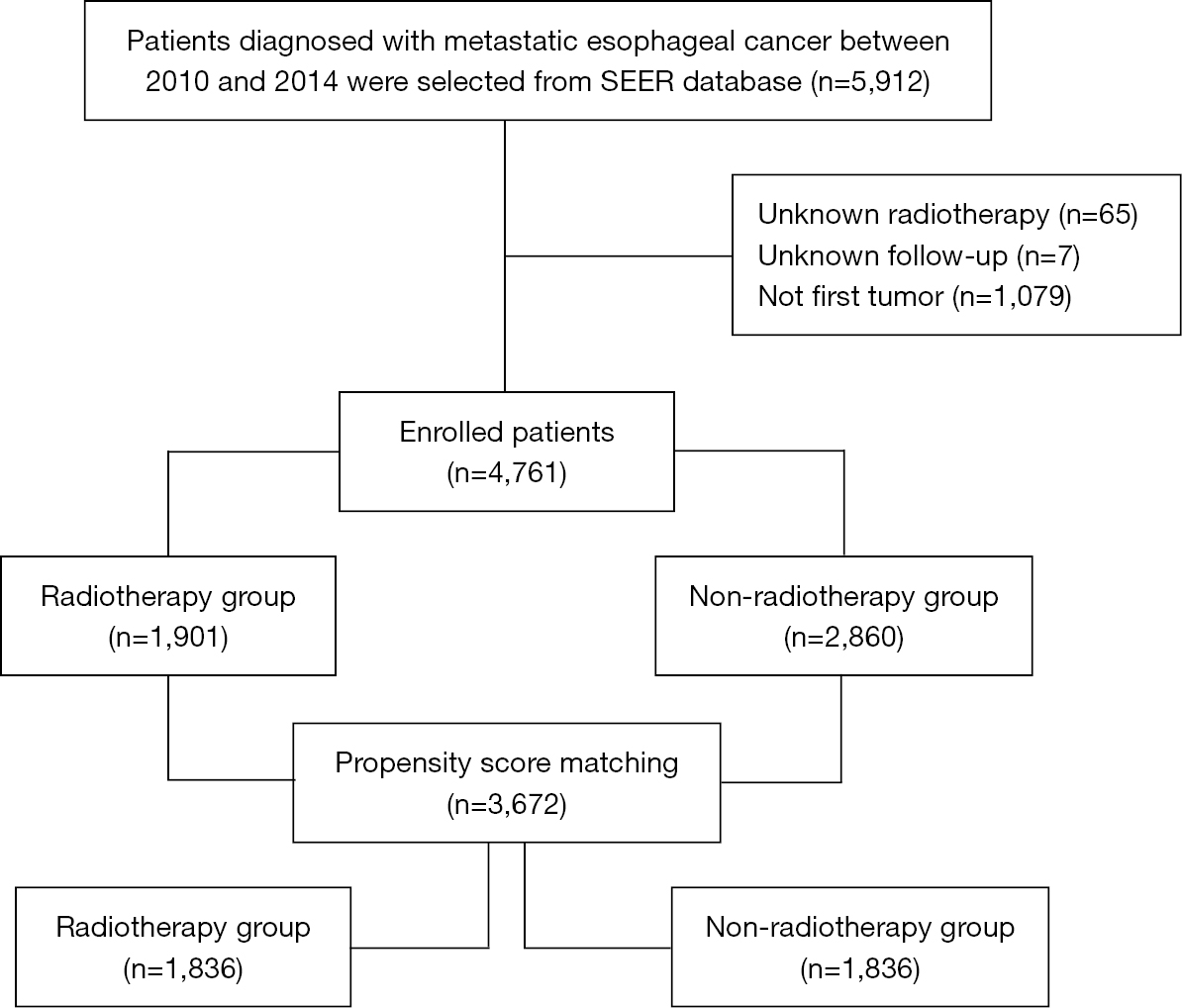 All statistical analyses were performed using the SPSS statistical software (version 22.0; IBM Corporation). Propensity score matching model was performed to reduce the bias of patients’ selection and obtain the balanced population of radiotherapy and non-radiotherapy group. The standardized differences for matched variables were less than 0.1. Chi-square test was used to identify the differences of two groups. Kaplan-Meier method was used to obtain survival information. Log-rank test and Cox regression analyses were implemented to evaluate covariates for OS and esophageal cause-specific survival (CSS). A value of P<0.05 were considered statistically significant for all analyses. 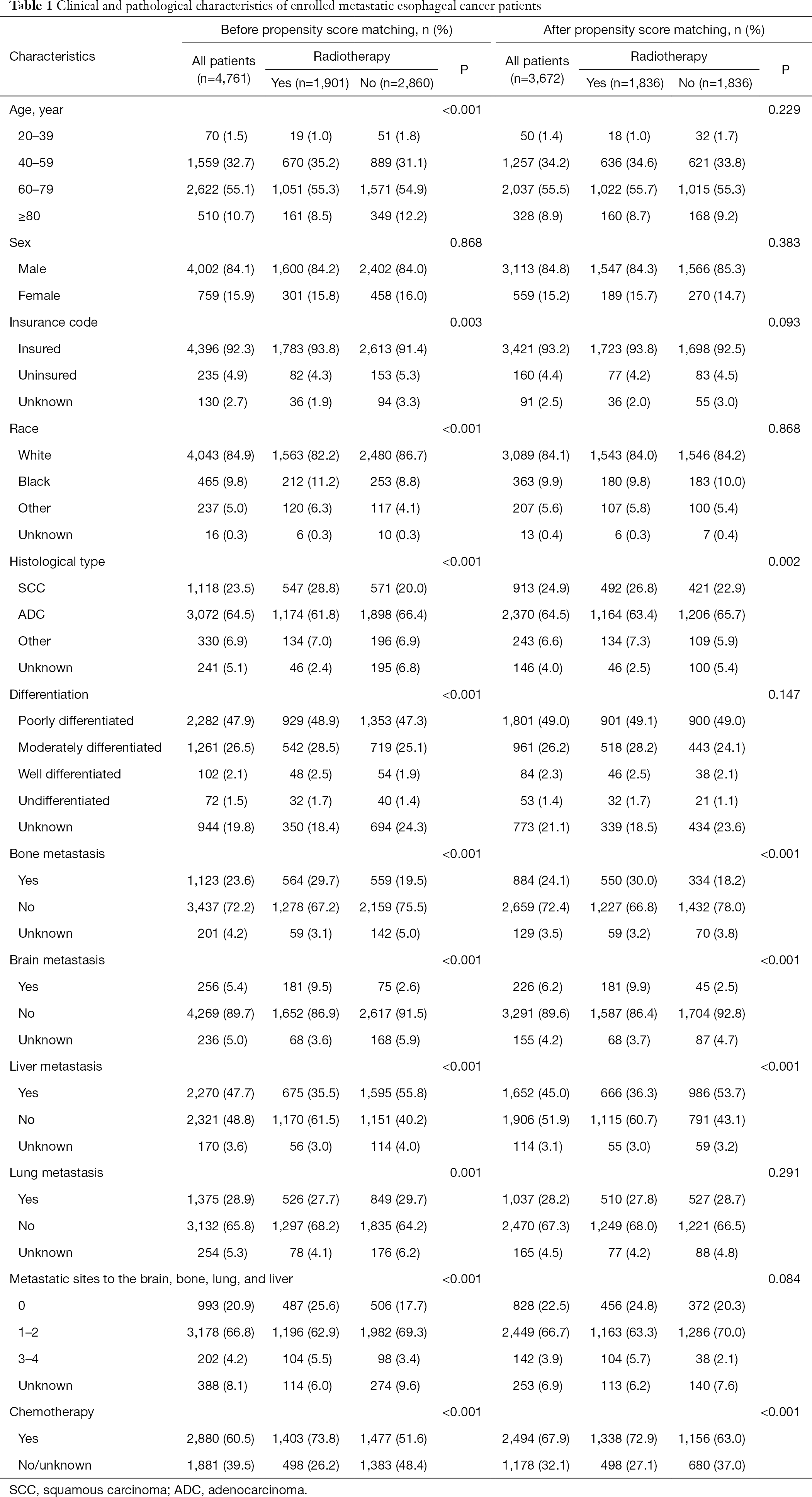 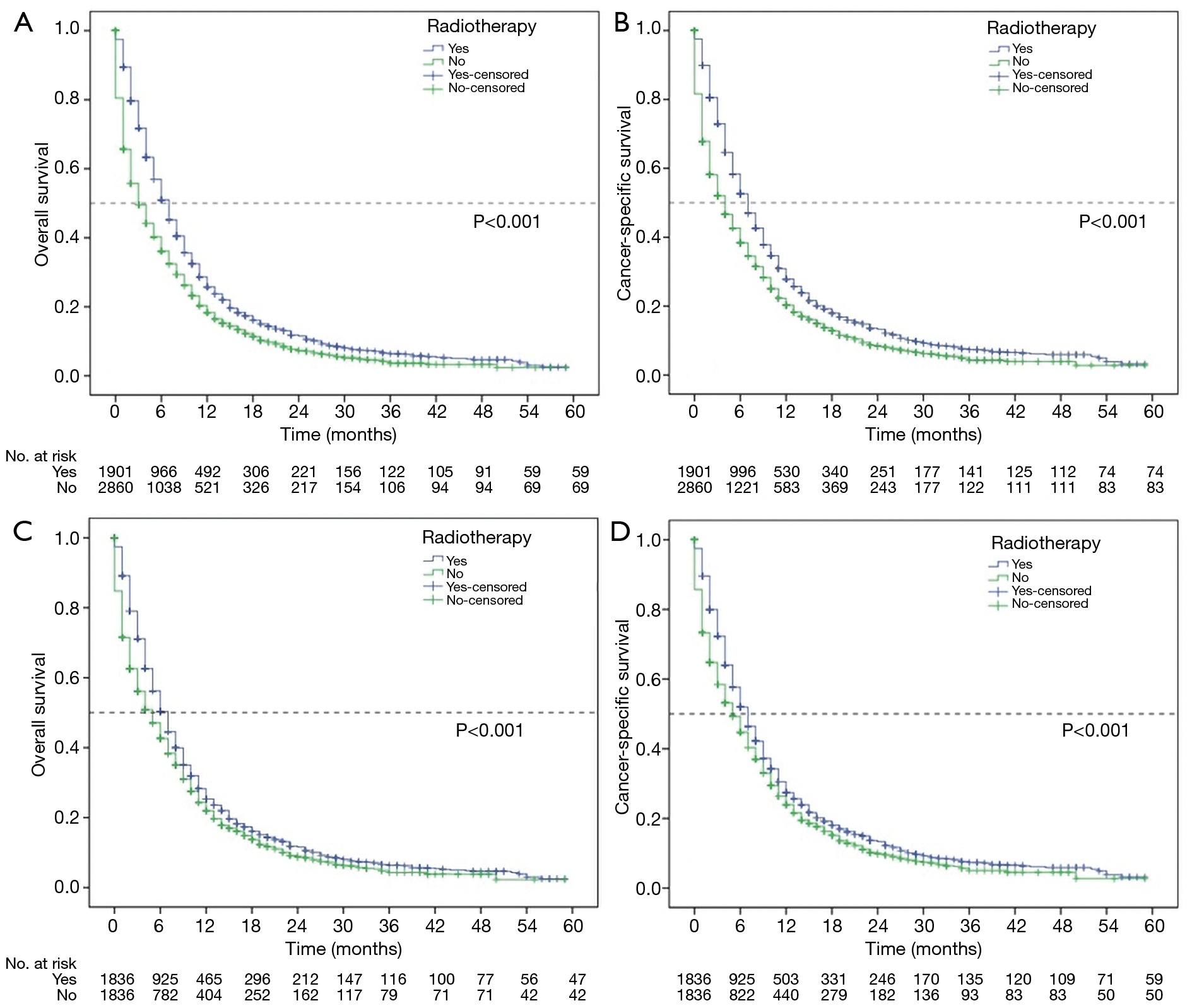 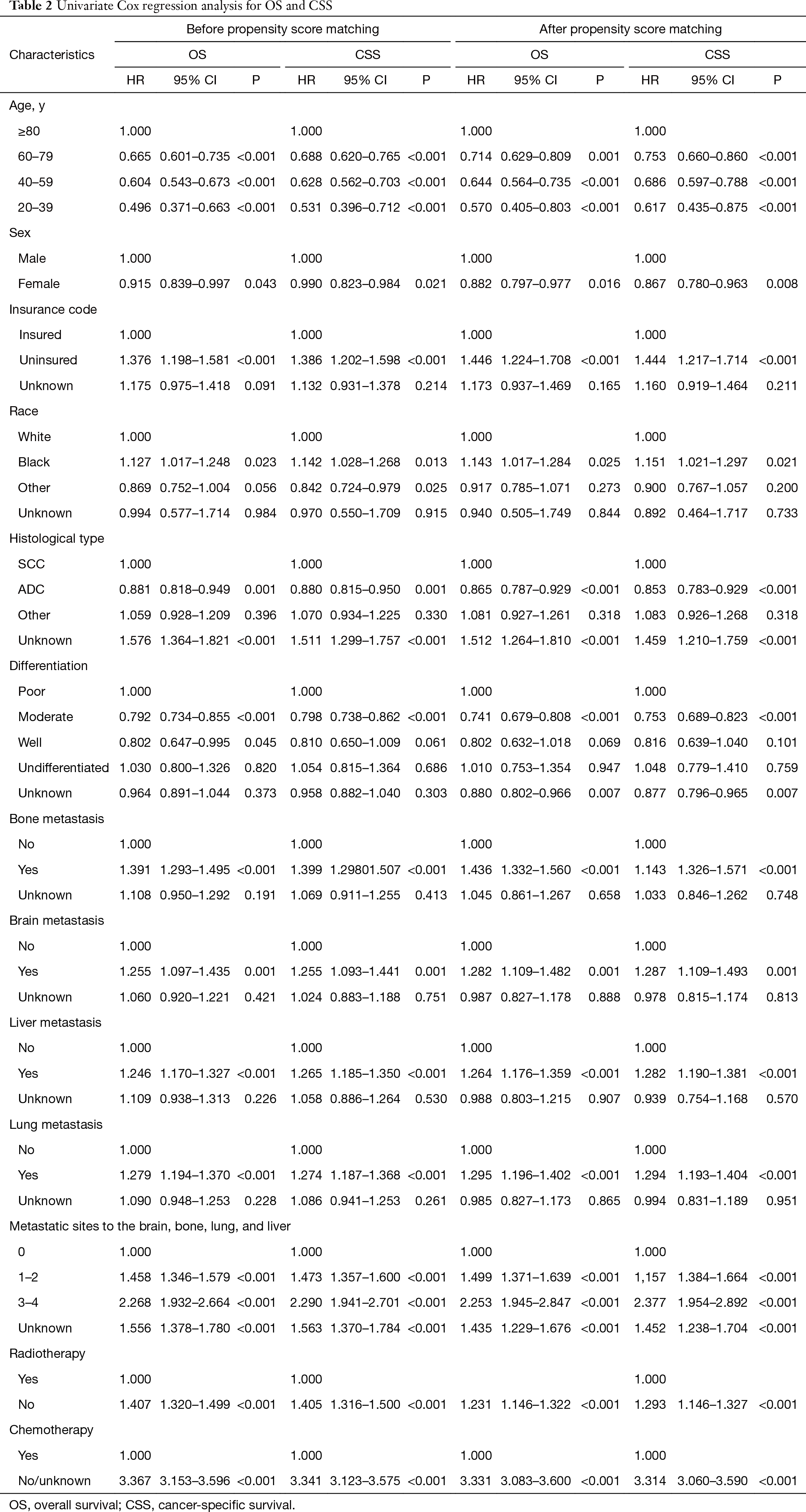 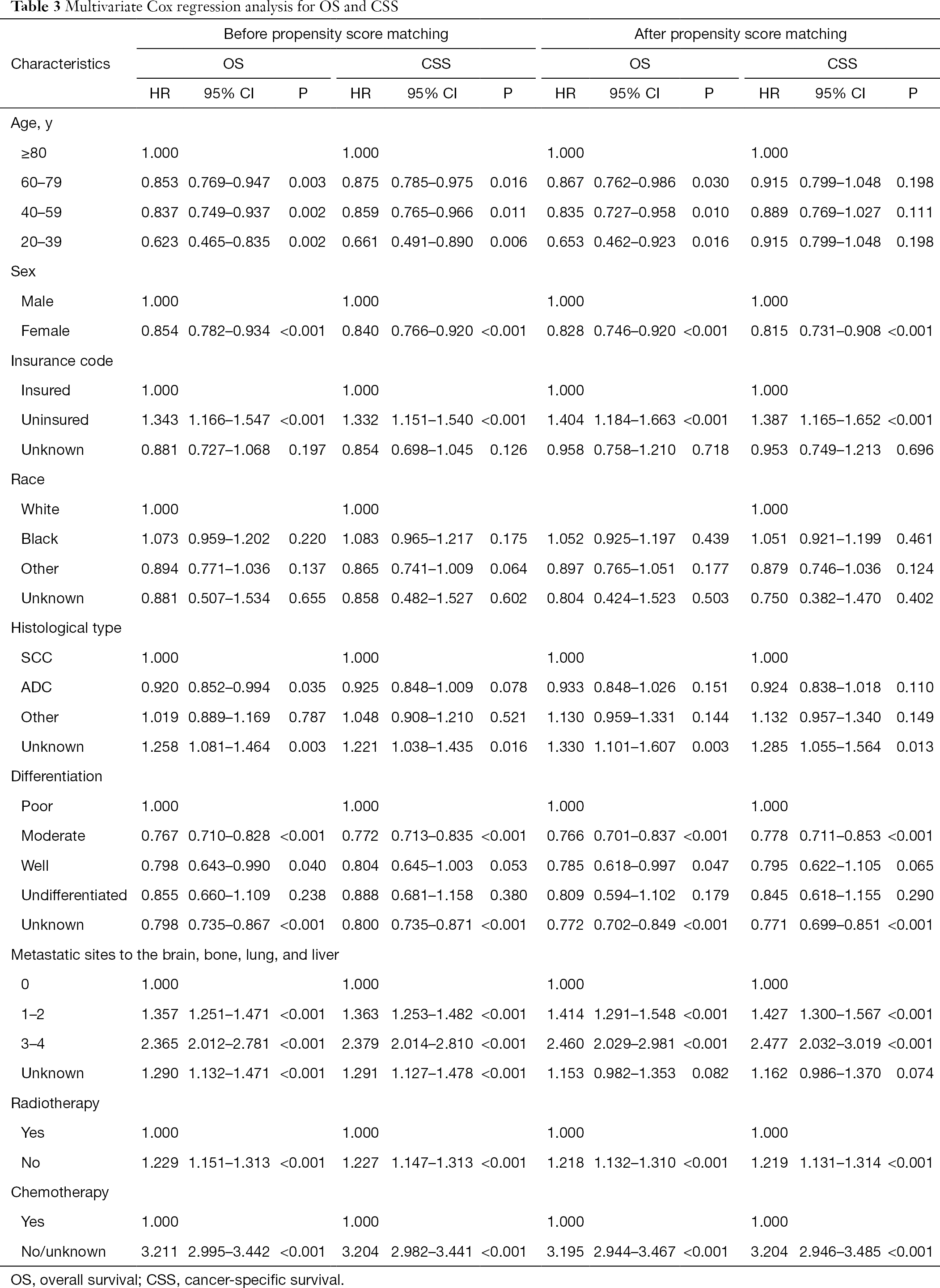 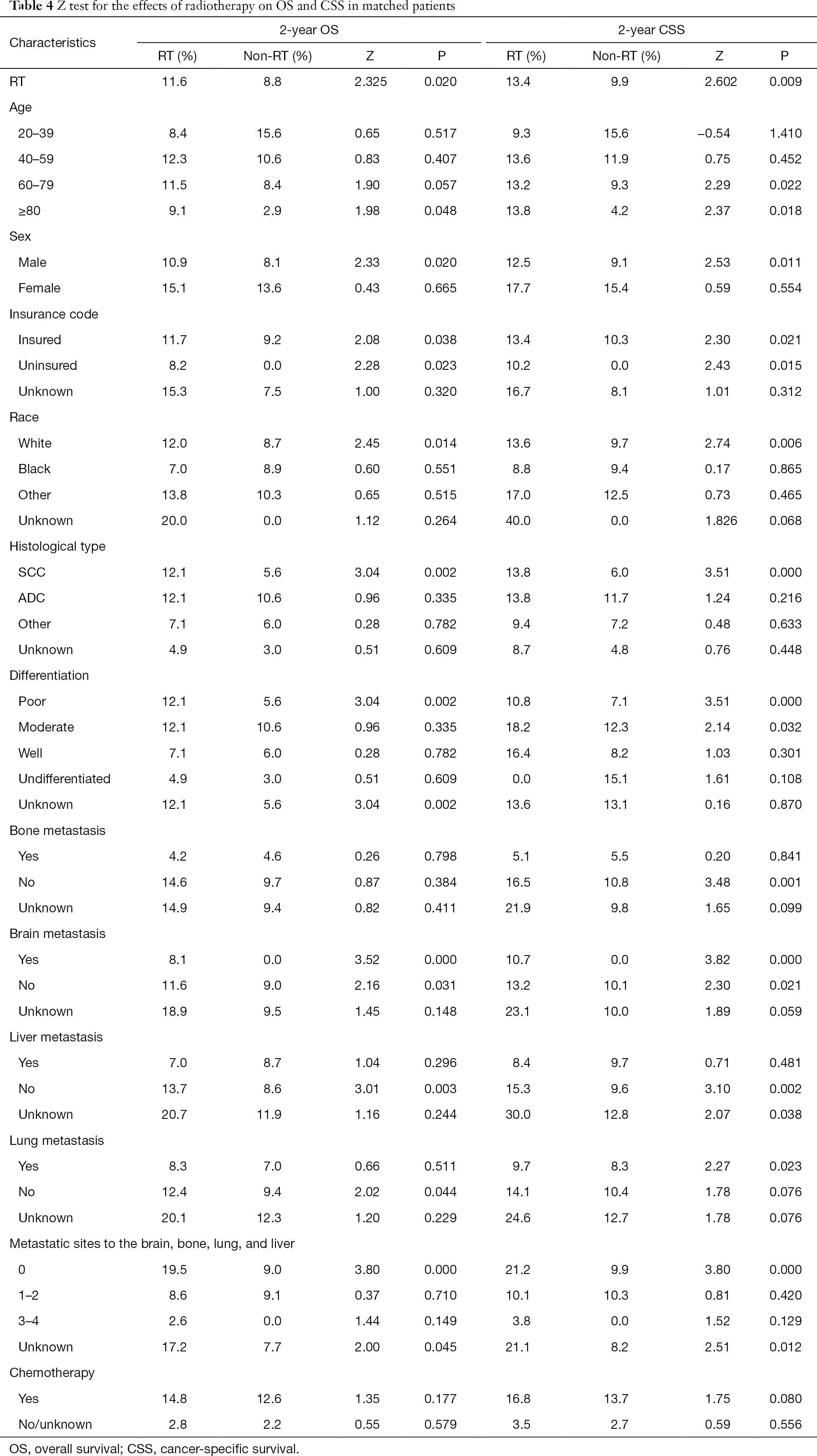 Although the research from Wu et al. (13) found that combining surgery with radiotherapy could improve survival in metastatic EC, it based on older populations, older methods of radiotherapy, and did not analyze the clinical benefits of chemotherapy combined with radiation therapy. A phase II study compared concurrent chemoradiation therapy (CCRT) with chemotherapy alone in stage IV esophageal squamous cell carcinoma, demonstrating that CCRT significantly prolonged median progression-free survival (mPFS, 9.3 vs. 4.7 months, P=0.021) and mOS (18.3 vs. 10.2 months, P=0.001) (14). This study challenged the status of standard treatment modality for metastatic EC treated with chemotherapy alone. The results showed that metastatic EC patients had good tolerance to concurrent chemoradiotherapy, and both OS and PFS were higher than chemotherapy alone. The possible mechanisms for radiotherapy to prolong the survival of metastatic disease may be improve local control rate under the premise of effective systemic therapy, produce certain cytokines that further inhibit the proliferation and metastasis of tumor cells. However, the phase II study was presented only in an abstract format, and the value of radiotherapy in the treatment of metastatic EC has not yet been fully evaluated. Thus, it was initially confirmed that the survival benefits of radiotherapy in metastatic EC based on this retrospective and propensity-matched study, which laid the foundation for the following clinical studies.

However, the addition of radiotherapy to chemotherapy showed no survival benefits, which was significantly inconsistent with the study mentioned above. The reason for the discrepancy between the two conclusions may be that the specific combination modalities of chemotherapy and radiotherapy such as concurrent or sequential therapy were unknown in this study which might influence survival, and that chemotherapy plays a leading role in the treatment of metastatic EC rather than radiotherapy.

The majority of studies found that the prognosis of patients with ADC is much better than the patients with SCC (17,18), however, these studies included all clinical stages of EC, but there was no significant prognostic difference between ADC and SCC in matched patients with advanced stage, and patients of both two types showed survival benefits from radiotherapy. Besides, the multivariable Cox regression analysis demonstrated that age, sex, insurance status, differentiation, chemotherapy were also important prognostic factors for metastatic EC.

There were few limitations in this study. Firstly, The SEER database does not provide information about the sites (both primary and metastatic sites) and dose of radiation therapy. Thus, there were no data of treatment response of radiotherapy, which might affect the results of analysis. Secondly, information relating to comorbidities and performance status was not available in the SEER database, which may influence the treatment approach, resulting in selective bias. Thirdly, the impact of chemotherapy regimens was unknown as no data was available in the SEER database. Last, the combination modalities of radiation and chemotherapy had not been shown in the SEER database, which is worthy of further investigations to maximize the survival benefits of radiotherapy in metastatic EC.

This large population-based study demonstrated that radiotherapy could improve the survival of patients with metastatic EC, which provides a line of evidence to guide the current treatment. Further randomized studies are warranted to assess the value of radiotherapy in the management of metastatic EC.

Ethical Statement: Data were retrieved from SEER database. The study was approved by the Ethics Committee of Renmin Hospital of Wuhan University.