Lung cancer in young patients: tumour characteristics and treatment in an Irish population

Lung cancer is one of the leading causes of cancer mortality worldwide. While most cases of lung cancer occur in patients of advanced age, there is an important subgroup of younger patients who are affected by the condition. Studies suggest that lung cancer in younger patients has distinguishable characteristics, particularly regarding patient gender, smoking status and tumour morphology (1-4).

National and international data demonstrate increasing rates of lung cancer in women, while the incidence in men continues to fall. There is evidence to suggest that this trend is replicated in younger patients (5,6). The exact mechanism for this is unknown, however this highlights important questions regarding gender specific lung cancer risk factors, which could have important implications for risk stratification and potential screening. Furthermore higher rates of adenocarcinoma have been demonstrated in younger patients, irrespective of gender, which has important treatment consequences (1-4). More patients are receiving lung cancer directed treatment, and therapeutic options are expanding in light of recent advances in lung cancer molecular diagnostics and treatments. These provide exciting opportunities to explore such therapies in a younger cohort. This retrospective single center study was designed to define the characteristics of lung cancer in patients 55-year-old or younger in an Irish population.

This is a retrospective, single center study of patients aged 55 years or younger with a confirmed diagnosis of lung cancer. With institutional approval, data was collected from local medical records and the hospital electronic database regarding patient age at lung cancer diagnosis, gender, smoking history, diagnostic modality, stage, tumour histological subtype and location and initial treatment choice, from January 2010 until December 2016. Patients with a diagnosis other than lung cancer or age greater than 55 years old were excluded from the study. Selected patients were subdivided into three categories according to age; <35 years, 35–44 years and 45–55 years old. The diagnosis of lung cancer was based on clinical, radiological and histological data and multidisciplinary team (MDT) discussion at the regional lung cancer MDT meeting in Cork University Hospital, Ireland.

Statistical analyses were performed on combined age groups using 2×2 contingency tables in GraphPad software to compare clinicopathological features. In all analysis a P value less than 0.05 was considered statistically significant.

A total of 1,635 patients were diagnosed with lung cancer from January 2010 to December 2016 in Cork University Hospital. A total of 130 patients met the inclusion criteria and were selected for further analysis. Patient characteristics are depicted in Table 1. There was no significant difference between gender related smoking rates, as 87% (n=47) of males and 89% (n=68) of females were current or formers smokers (P=0.7289). 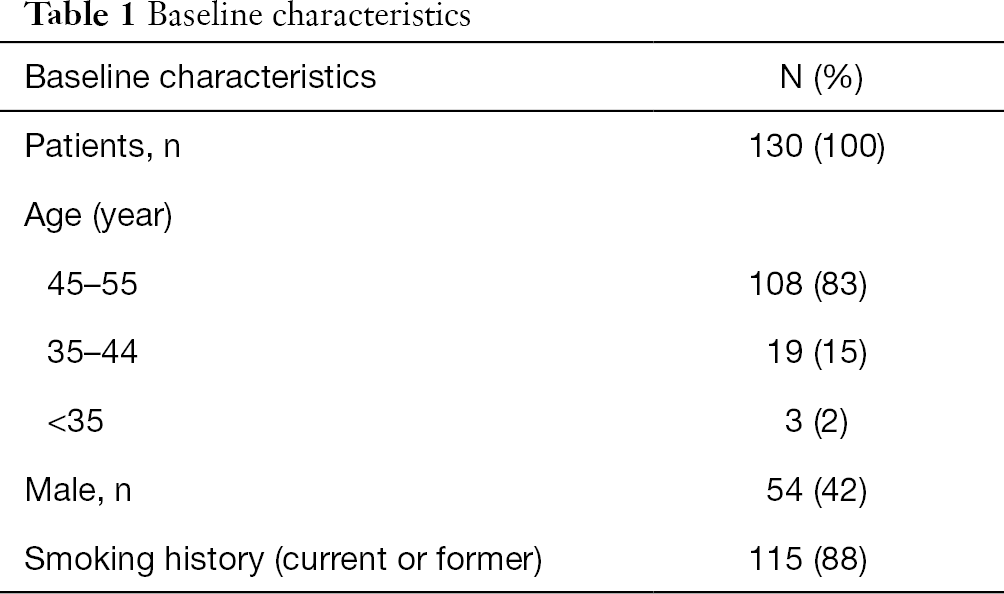 All patients (n=130) had a CT thorax as part of the diagnostic workup. Cytopathology and histopathology specimens were obtained using many modalities, including bronchoscopic endobronchial and transbronchial biopsy (27%), endobronchial ultrasound guided transbronchial needle aspiration (20%), CT guided lung biopsy (15%), surgical biopsy (15%) and biopsy of distant metastases (16%) An alternative method was used in 7% (n=9) (Table 2).

NSCLC non squamous was diagnosed in 53% (n=69) of cancers, NSCLC squamous in 15% (n=19) and NSCLC NOS in a further 7% (n=9). Small cell lung cancer was diagnosed in 14% (n=18) and carcinoid in 11% (n=15) (Table 2). Regarding tumour stage, 41% (n=53) of patients had stage IV disease and 12% (n=15) had extensive small cell carcinoma at diagnosis (Table 2). All histological subtypes increased with increasing patient age (P=0.0536) (Figure 1A). Figure 1B depicts tumour histology according to patient gender and demonstrates higher numbers of NSCLC and small cell lung cancer in young female patients relative to their male counterparts, which did not meet statistical significance (P=0.6077).

Furthermore, epidermal growth factor receptor (EGFR), anaplastic lymphoma kinase (ALK), Kirsten rat sarcoma oncogene (KRAS) and c-ros oncogene 1 (ROS1) mutations were assessed in individual cases, guided by lung cancer MDT recommendations. Molecular analysis was performed in 47 cases (36%) and all positive cases were mutually exclusive. EGFR mutations were identified in 4 (9%) of 47 cases and an ALK translocation was identified in 1 (3%) of 30 samples. In Ireland assessment of KRAS mutations and programmed death-ligand 1 (PD-L1) expression are only recommended in cases of advanced NSCLC, with no evidence of EGFR or ALK mutations KRAS mutations in 4 (80%) of 5 analysed specimens (Table 3). Expression of PD-L1 was assessed in 6 cases. High PD-L1 (>50%) expression was present in 1 case (16.7%) and low expression (1–50%) in a further case (16.7%). The remaining 4 cases tested for PD-L1 expression were negative (66.7%) (Table 4).

The most common initial treatment for stage I–II disease was surgery (n=33, 25%) and for stage III (n=7, 5%) and IV (n=31, 24%) were chemotherapy. Patients with small cell lung cancer were typically treated initially with combined chemotherapy and radiation therapy or chemotherapy alone (n=17, 13%) (Table 5).

Lung cancer is one of the leading causes of cancer mortality worldwide and lung cancer in the young can be a devastating, life-limiting disease. Research in this cohort is currently limited by certain factors, including ambiguity regarding the precise definition of ‘young’ and the small and frequently retrospective nature of these studies. Nonetheless, this multicenter retrospective study highlights some interesting characteristics in this population and to our knowledge, is the first study in an Irish population describing lung cancer in patients aged 55-year-old or younger.

At present marked heterogeneity exists regarding the definition of ‘young’ lung cancer patients in the literature; for example Rocha et al. [1994] selected a threshold of 40-year-old, Kreuzer et al. [1998] chose 45 years and Franceschini et al. [2017] adopted a threshold of 55 years to define ‘young’ (1-3). The rational behind these choices are frequently unclear. Arnold et al. [2016] selected an age threshold in their study by calculating the age two standard deviations below the mean age of lung cancer diagnosis in their population (4), which may be an appropriate, population centered approach. Clarification of this definition is essential to guide the design of future studies and to facilitate subsequent comparisons. The National Cancer Registry Ireland (NCRI) 2011 report noted that 9% of patients diagnosed with lung cancer between 1994 and 2008 were less than 55-year-old and therefore a threshold of 55-year-old was chosen in our study in an Irish population (7).

This study describes interesting characteristics regarding gender, tumour location and histology. Firstly this study suggests a female preponderance (59%, n=76). This is concordant with Irish and international data, demonstrating rising incident rates of lung cancer in women. Specifically, the National Cancer Registry Ireland (NCRI) reported declining incident rates of lung cancer in men (−0.8% per year) and rising rates in women (+2.0% per year) from 1994 to 2013 (5). A similar trend was noted by Jemal et al. in American population, which reported higher incidence rates of lung cancer among women (6). Increased smoking rates in women partly explain this trend and our study emphasizes the persistent relevance of this risk factor, as 88% (n=115) of young lung cancer patients were current or former smokers. Authors such as Campling et al. [2019] have demonstrated significant age differences between current and former smokers (8), suggesting that ongoing tobacco exposure may accelerate the propensity to develop lung cancer in continuing smokers. This finding was not replicated in our study, as the median age at lung cancer diagnosis was 52 and 53-year-old in current and ex-smokers respectively (P=0.5617). While these findings reinforce the value of sustained anti-tobacco measures, this difference in lung cancer incident rates is not fully explained by sex difference in smoking behavior. Further research into sex specific risk factors for lung cancer, including susceptibility to tobacco carcinogens, should be pursued to establish precise mechanisms (6,9).

Additionally tumour location is an important factor to consider in the assessment of suspected lung cancer cases. The 42% (n=54) of lung cancers in this study were identified in the upper lobes. The American College of Chest Physicians and The British Thoracic Society have identified upper lobe location as an independent predictor of malignancy for solitary pulmonary nodules (10,11). Some studies suggest that this association is potentially more marked in younger patients (12,13), however this finding is inconsistent (14).

Tumour histology and stage have important treatment and prognostic implications. Unfortunately the diagnosis of lung cancer is occasionally delayed in younger patients, as the clinical suspicion for lung cancer is often lower. This was highlighted by Bryant et al. [2008] and Dell’Amore et al. [2015] as younger patients were frequently referred to thoracic surgeons later than older patients (15,16). In our study the diagnosis of lung cancer was based on pathological specimens in all cases. This presumably reflects a favorable performance status in younger patients due to fewer comorbidities and a possible tendency to investigate these patients more aggressively due to their age. This contrasts practice regarding the entire lung cancer population in our center, as in 2016, 15% (n=53) of all lung cancer patients did not undergo invasive tests due to a poor performance status or patient preference and therefore received a clinical diagnoses of lung cancer only (17).

Multiple studies have demonstrated a predominance of adenocarcinoma in young lung cancer patients and a tendency to obtain a diagnosis at an advanced stage (18-21). These findings are replicated in our study, as adenocarcinoma was the dominant subtype (46%, n=64) and 53% (n=68) were diagnosed with stage IV NSCLC or extensive small cell lung cancer at presentation. This poses interesting questions regarding lung cancer screening in younger patients. Current evidence, namely the National Lung Cancer Screening Trial and the NELSON trial suggest a role for lung cancer screening in high-risk groups, which are frequently identified as ‘older’, with an associated high pack year history (22,23). This model has the potential to neglect ‘high risk’ younger patients.

Molecular analysis was performed in 36% (n=47) of cases in this study. These rates are comparable to recent data published by Bigay-Gamé et al. [2018] in a French cohort of young lung cancer patients, as only one third of their population underwent molecular profiling (18), reflecting the non-mandatory nature of biological profiling in both countries during this period and restricted therapeutic options. For example, in Ireland assessment of KRAS mutations and PD-L1 expression are only recommended in cases of advanced NSCLC, with no evidence of EGFR or ALK mutations. Interestingly, a recent multicenter study exploring the incidence of molecular mutations in an Irish population noted a KRAS gene mutation incidence of 41.6% in their entire lung cancer cohort (24). Therefore further data regarding molecular diagnostics, PD-L1 expression and tumour mutational burden in young lung cancer patients is not only desirable but essential and could have meaningful clinical implications (25).

Given the retrospective nature of this study, documentation of specific patient risk factors such as family history and illicit drug use was incomplete and therefore not included. This is a possible limitation, as prior studies have highlighted the potential importance of these risk factors in this cohort (18,26). A further limitation is the lack of a control group of older patients to facilitate direct comparison within our populations. Finally, molecular analysis was performed in approximately one third of cases and further information regarding biological profiling should be the focus of future studies in this growing cohort of younger patients

This study reinforces existing data, which demonstrates distinct characteristics in young lung cancer patients, including a female preponderance, high rates of adenocarcinoma and frequent advanced stage at diagnosis. Further large scale multicenter studies are required to verify these results and to delineate the responsible mechanisms. It is clear from this data that we should continue to aggressively address smoking behavior, while simultaneously exploring these findings.

Ethical Statement: The authors are accountable for all aspects of the work in ensuring that questions related to the accuracy or integrity of any part of the work are appropriately investigated and resolved. The study was approved by Cork Research Ethics Committee [No. ECM 6 (q) 01/03/16].