MicroRNAs (miRNAs) are small and non-coding single-chained RNAs, which targets mRNAs and causing their translation or degradation (11). Several evidences indicate that miRNAs have crucial functions in adjusting biological behaviors including cell proliferation, apoptosis and differentiation (12,13). It is reported that hsa-mir-146-5p, -146b-3p, -222, -222-5, -221, -551b, -375, 99b-3p and 181-2-3p are deregulated in follicular variant of papillary thyroid carcinoma. Furthermore, hsa-mir-181a-2-3p and hsa-mir-99b-3p are related to the adverse outcome in patients with follicular variant of papillary thyroid carcinoma (14). DNA methylation can modify mRNA expression patterns and aberrant hypermethylation is associated with inactivation of tumor-related mRNAs (15,16). The methylation pattern of NIS, TSHR, SLC26A4, TIMP3, RARβ2 and RASSF1A has been found in papillary thyroid carcinoma (17-20).

Differentially expressed miRNAs and mRNAs were evaluated in the r-bioconductor package DESeq (21). The Limma package in R was applied to calculate P values by two-tailed Student’s t-test. MetaMA package in R was utilized to combine P values, and the false discovery rate was obtained from multiple comparisons using the Benjamini and Hochberg method (22). Those differentially expressed miRNAs and mRNAs were identified with the criterion of P<0.05.

The pairwise Pearson correlation coefficients between differentially expressed miRNAs and mRNAs were calculated, and P<0.05 was considered as statistical significance. Six miRNA-target prediction tools (miRWalk, miRanda, miRDB, RNA22, PICTAR2 and Targetscan) were used to predict target genes of differentially expressed miRNAs. Only those miRNA-target pairs which were predicted by more than four algorithms can be selected out. The miRNA-targets pairs verified by experiment in miRWalk database were also screened out. We selected the miRNA-target pairs with negative correlations to establish the miRNA-target regulatory network, which was visualized using Cytoscape software (23).

In order to understand the biological function of target mRNAs of differentially expressed miRNAs, we conducted Gene Ontology (GO) and the Kyoto Encyclopedia of Genes and Genomes (KEGG) pathway enrichment analysis based on the online software GENECODIS (24). FDR <0.05 was set as the criterion for selecting significantly enriched GO and KEGG terms of target differentially expressed mRNAs.

The COHCAP package in R (https://sourceforge.net/projects/cohcap/) (25) was used to screen the differential methylation sites between tumors and normal tissues that are more likely to regulate downstream gene expression. Methyl.cutoff =0.5, unmethyl.cutoff =0.3, delta.beta.cutoff =0.1 and false discovery rate <0.05 were considered as differentially methylated CpG sites. Based on the mRNA expression of the follicular variant of papillary thyroid carcinoma, we identified the aberrant DNA methylated CpG sites which affected corresponding mRNA expression.

Five patients diagnosed with follicular variant of papillary thyroid carcinoma and five normal individuals were enrolled in this study. Both the tumor and corresponding normal tissue samples were resected at the time of surgery, and immediately frozen in liquid nitrogen. All participating individuals provided informed consent with the approval of the ethics committee of General Hospital of Jinan Military Region of PLA. In addition, our study conforms to the provision and in accordance with the Helsinki Declaration.

Total RNA of the tissue samples was extracted using the TRIzol® Reagent (TIANGEN) according to the manufacturer’s protocols. Two µg RNA was applied to synthesize DNA by SuperScript® III Reverse Transcriptase (TIANGEN). Then real-time PCR was performed in an ABI 7300 real-time PCR system with SYBR® Green PCR Master Mix (Applied Biosystems). All reactions were carried out in triplicate. Relative gene expressions were analyzed by 2−ΔΔCt method. 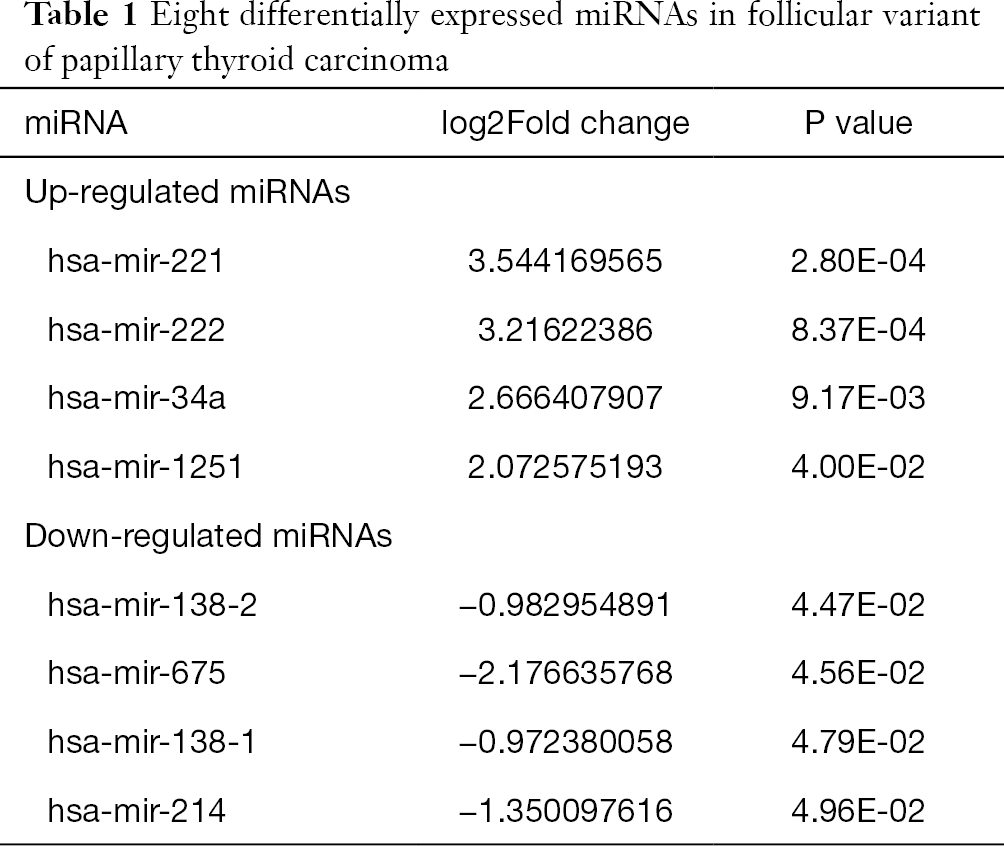 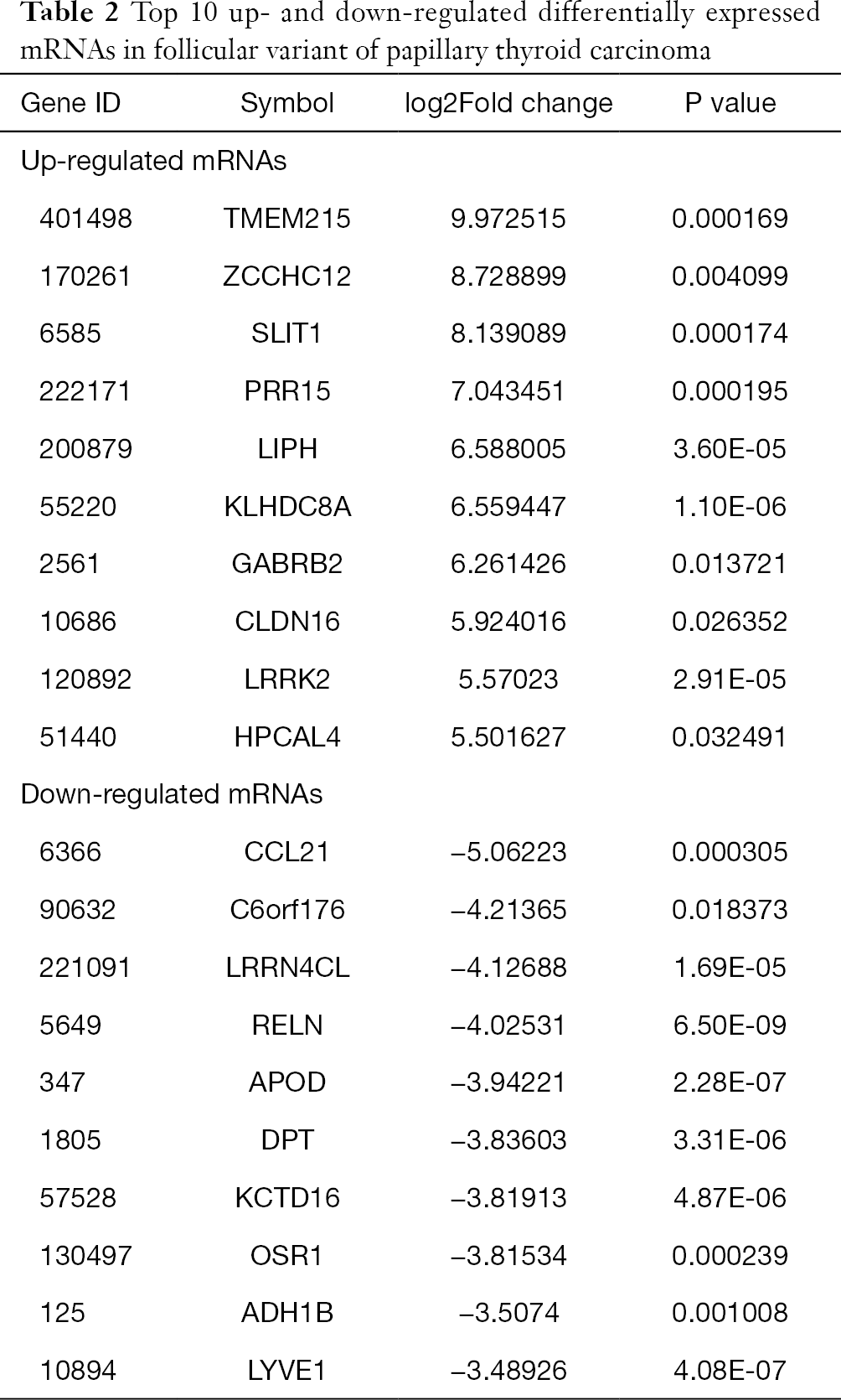 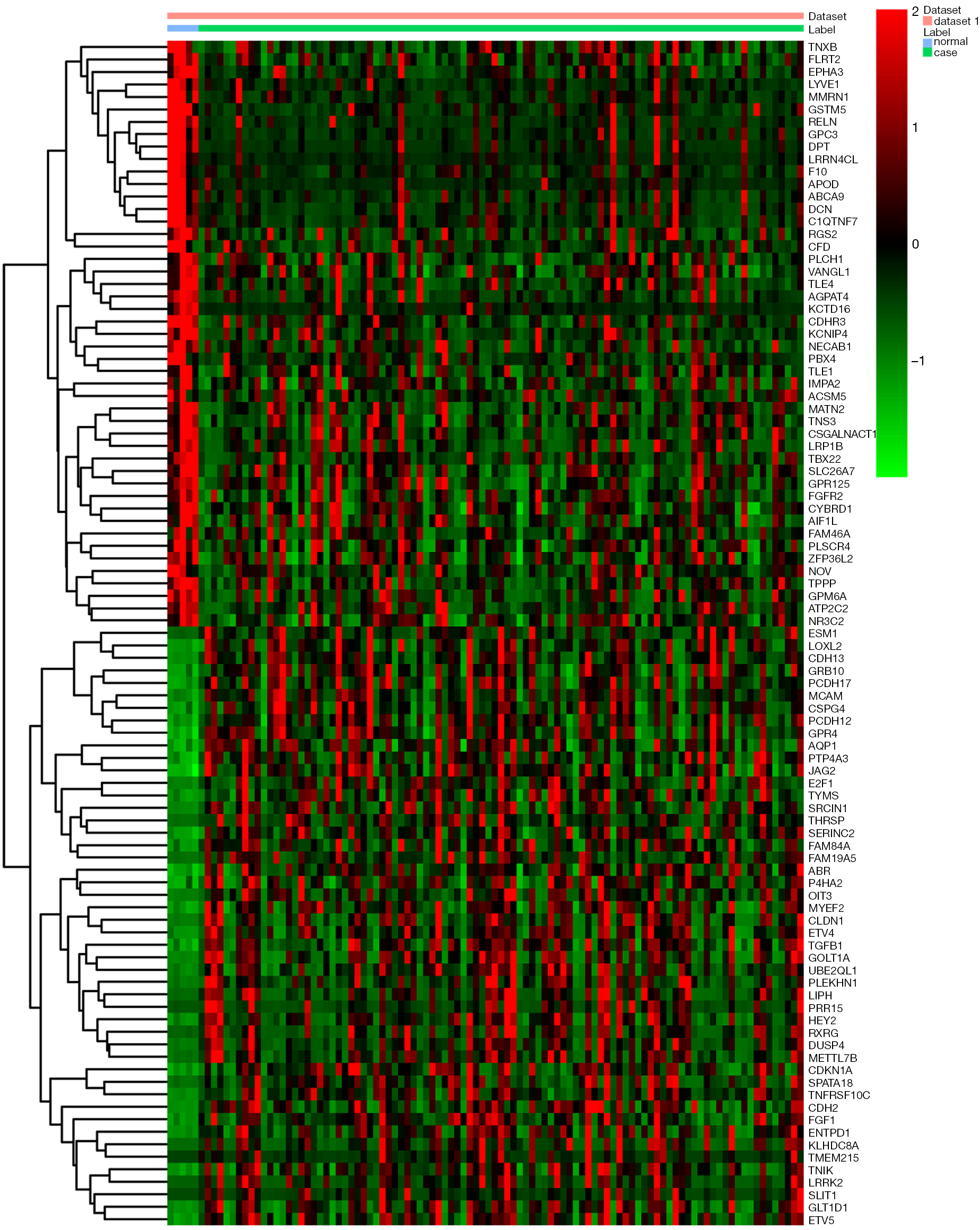 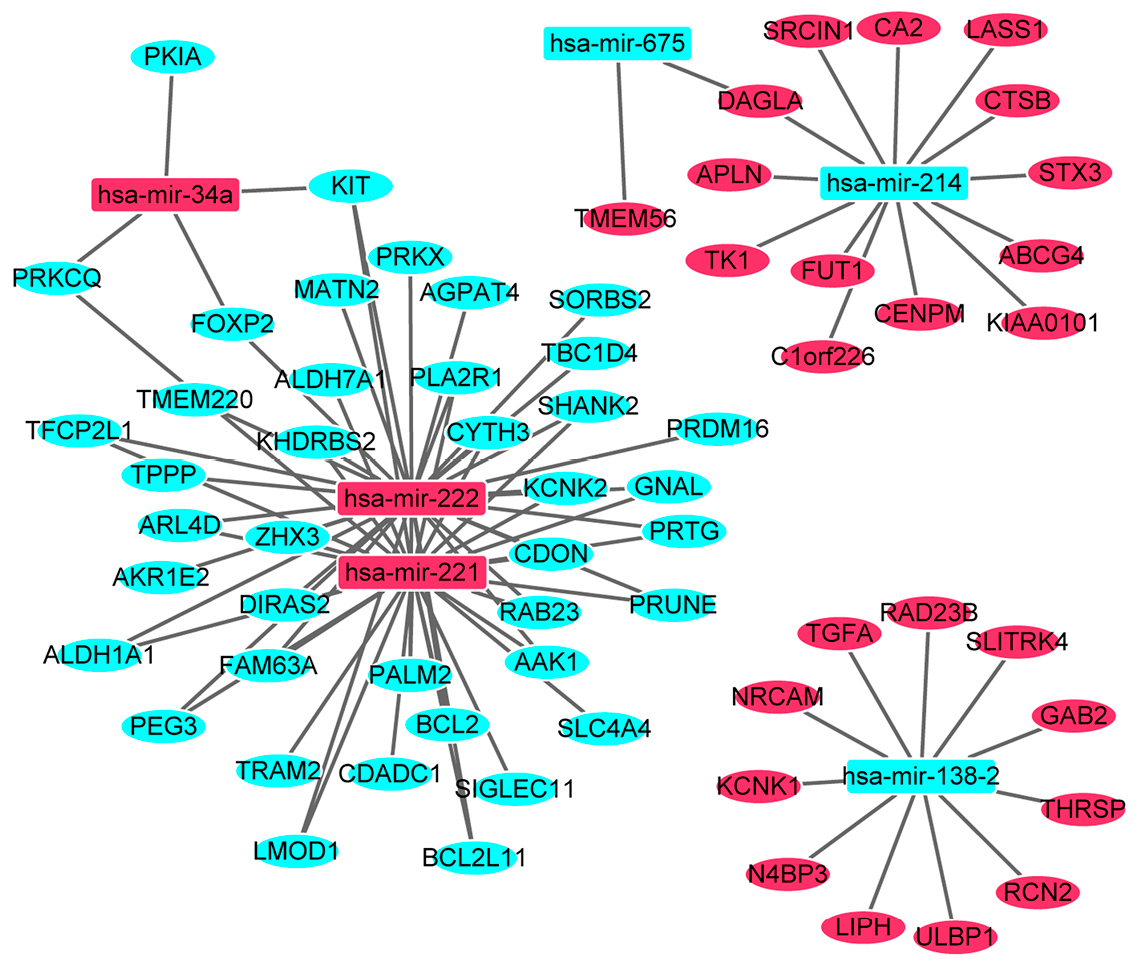 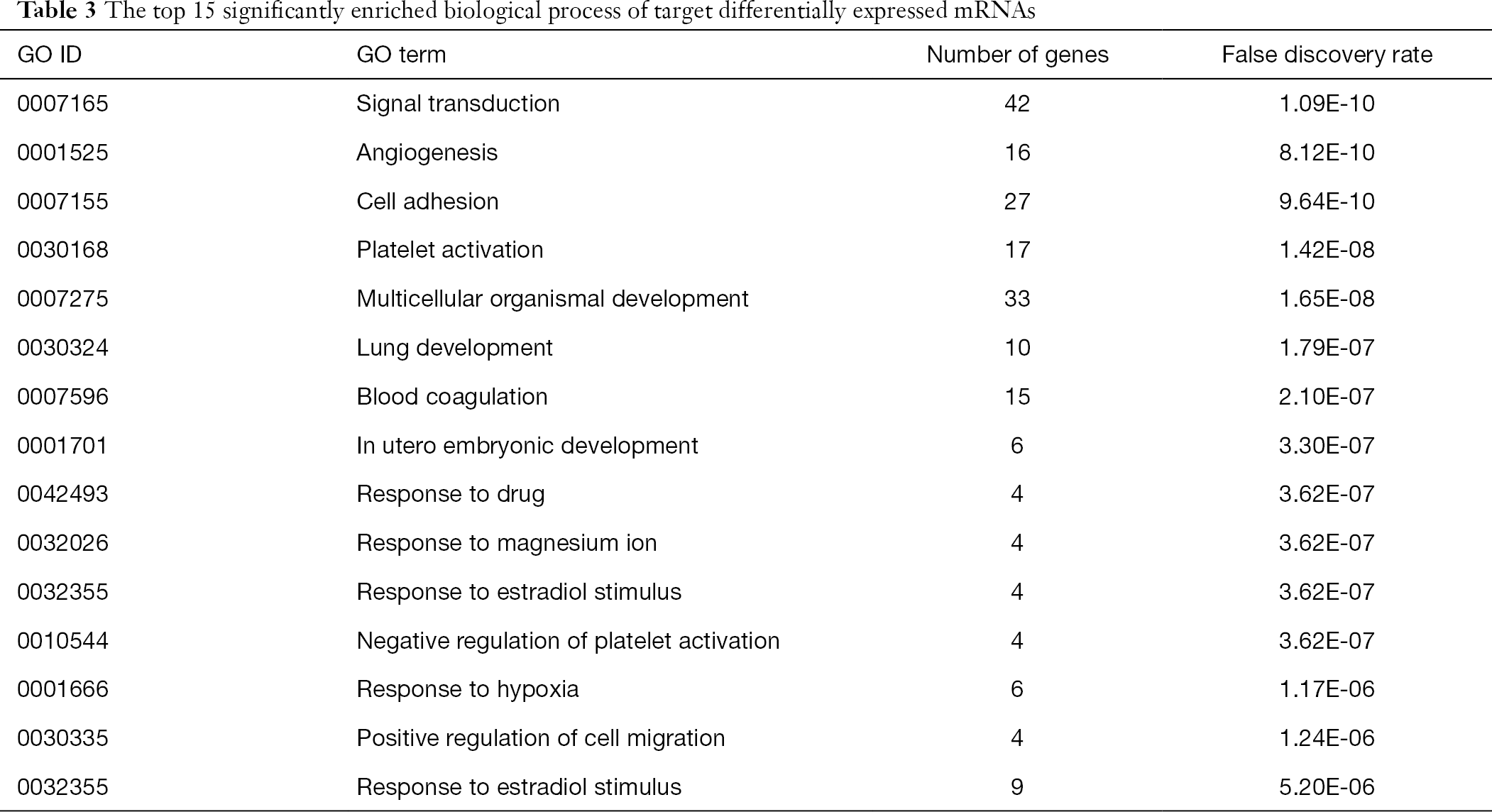 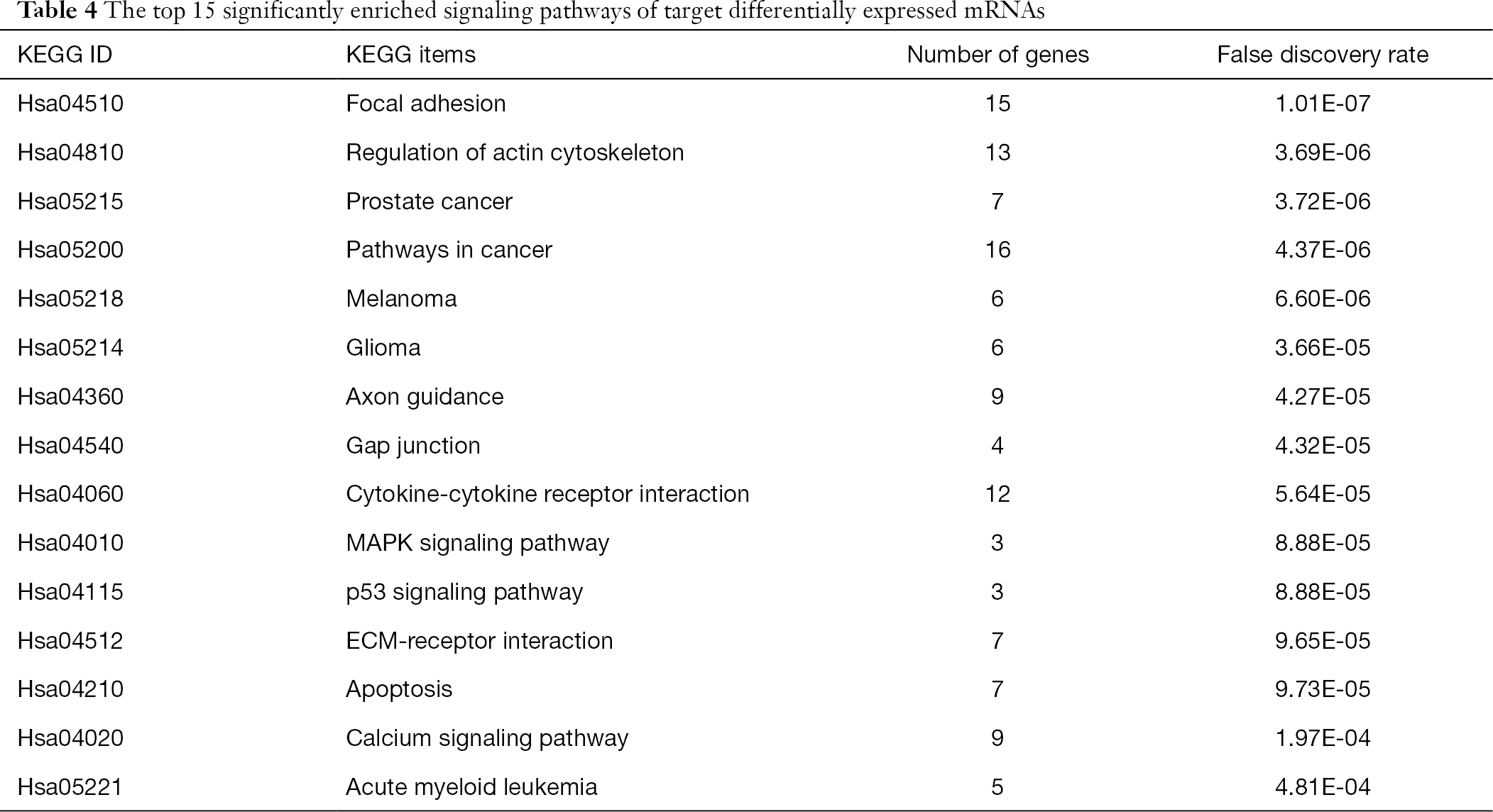 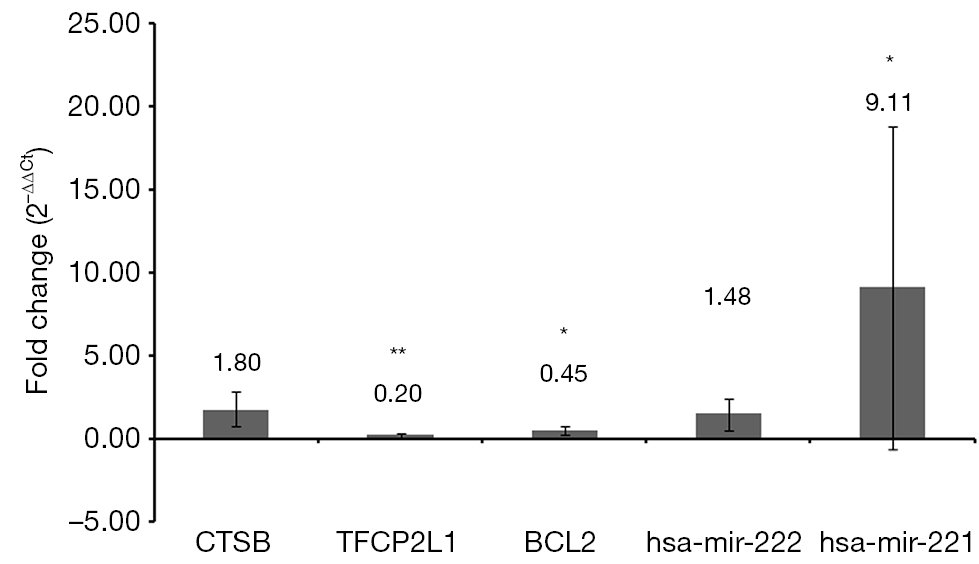 BCL2, apoptosis regulator (BCL2), an antiapoptotic protein, is involved in biological processes of cell survival and blocking of apoptosis (34,35). It is found that the over expression of BCL2 is associated with aggressiveness of papillary thyroid carcinoma (36). BCL2 like 11 (BCL2L11) is a pro-apoptotic gene and involved in controlling cell death. Bim protein, encoded by BCL2L11, has been regarded as functionally relevant in rat follicular thyroid cells (37). Paternally expressed 3 (PEG3) is associated with cell death and apoptosis. PEG3 encodes the tumor suppressor and is down-regulated in several cancer types, such as glioma, gynecologic cancer, ovarian cancer and invasive cervical cancer (38-41). This suggested that cell apoptosis plays an important role in the process of follicular variant of papillary thyroid carcinoma.

Hsa-mir-214 is significantly down-regulated in tissues and cells of papillary thyroid carcinoma compared with normal, which was remarkably associated with tumor size, TNM stage and lymph node metastasis. In this study, we found that the expression of hsa-mir-214 is down-regulated in the follicular variant of papillary thyroid carcinoma. Moreover, Thymidine kinase 1 (TK1) was one of targets of hsa-mir-214. TK1 is involved in DNA repair and internationally recognized as the marker of abnormal cell proliferation. It is noted that up-regulated expression of TK1 is closely associated with active tumor growth (56). Furthermore, serological TK1 could be an important marker for the early risk of malignancy development (57).

It has been demonstrated that hsa-mir-138-2 has a diagnostic value for papillary thyroid carcinoma (53). In the present study, we found that the expression of hsa-mir-138-2 was decreased in the follicular variant of papillary thyroid carcinoma. In addition, cathepsin (CTSB) was regulated by hsa-mir-138-2. CTSB, a lysosome enzyme, is over expressed in tumor endothelial and epithelial cells. It is found that CTSB is significantly up-regulated in the tumor tissues of thyroid cancer.

In summary, our integrated analysis of the TCGA data led to a number of differentially expressed miRNAs, mRNAs and methylated mRNAs. The epigenetic modifications via five miRNAs (hsa-mir-222, hsa-mir-221, hsa-mir-34a, hsa-mir-214 and hsa-mir-138-2) for BCL2, BCL2L11 and PEG3, ALDH1A1, PLA2R1, TFCP2L1, RAB23, TK1 and CTSB may be involved in tumorigenesis of follicular variant of papillary thyroid carcinoma. The study of epigenetic alterations between these miRNAs and mRNAs is of value to investigate the pathogenesis of follicular variant of papillary thyroid carcinoma. However, there are limitations to our study. Firstly, the sample in the QRT-PCR is small and larger numbers of tumor tissues are needed for validation; secondly, the deeper mechanism study of the disease such as the animal model and cell culture are also needed.