Colon cancer is one of the most common malignancies and the second leading cause of cancer-related deaths worldwide (1). Recently, many improvements have been made in screening, detection and therapy for colon cancer. However, the prognosis of patients with advanced stage colon cancer remains poor because of tumor recurrence and metastasis (2,3). Despite a large number of genes have been associated with colon cancer, the findings failed to translate to clinical practice effectively (4). Therefore, it is crucial to identify efficient novel biomarkers for better prediction, diagnosis and disease management.

Increasing evidence has revealed that long non-coding RNAs (lncRNAs), a newly identified transcripts longer than 200 nucleotides with limited protein coding potential, can participate in various physiologic or pathologic processes via diverse mechanisms (5-7). Dysregulated lncRNAs have also been indicated to modulate important cancer hallmarks, such as proliferation, metastasis, and drug-resistance (8-10). As novel heterogeneous class of non-coding RNAs, lncRNAs account for much of the transcribed genome and gain widespread concern. Some lncRNAs harbor miRNAs within their exonic or intronic sequences, and hence are categorized as miRNA-host gene lncRNAs (lnc-miRHGs) (11). Nowadays, the clinical relevance of lnc-miRHGs in colon cancer remains largely unexplored. A great deal of studies have demonstrated that miR-17-92 cluster (composed of 6 miRNAs including miR-17, miR-18a, miR-19a, miR-19b, miR-20a, and miR-92a) is significantly overexpressed in digestive tract malignancies, such as gastric cancer, colon cancer, carcinoma and pancreatic cancer, and contributes to tumorigenesis and progression (12-15). As a novel lnc-miRHG, MIR17HG (miR-17-92 cluster host gene lncRNA) is known to be synthesized from miR-17-92 cluster host gene due to pre-miRNA processing, but limited evidence has clarified its roles in malignancies (16). These clues intrigued us to ascertain the potential functions of MIR17HG in cancer biology. Thus, we were interested in determining the possible association between MIR17HG and miR-17-92 cluster in colon cancer.

In the present study, we investigated the expression and clinical significance of MIR17HG, and firstly demonstrated a novel MIR17HG-miR-17/18a-Wnt/β-catenin signaling axis that mediated the progression of colon cancer.

Primary tumor samples and matched normal mucosa were randomly collected according to the standard operation procedures from 60 colon cancer patients (33 males and 27 females) who underwent surgery without prior chemotherapy or radiotherapy. A single sample (taken from the tumor center) was used from each cancer, and the matched normal mucosa was taken at least 5 cm away from the edge of the tumor tissue. The diagnosis of all specimens was histopathologically confirmed by at least two pathologists. The research was designed and performed according to the principles of Helsinki Declaration and was approved by the Institutional Ethics Committee of Taian City Central Hospital (approval No. TACH-20170414).

The short hairpin RNAs (shRNAs) used for MIR17HG knockdown were synthesized by OBiO (Shanghai, China). Stably modified cells were selected with puromycin after transfection. The mimics used for hsa-miR-17 and hsa-miR-18a overexpression, and negative control were purchased from RiboBio (Guangzhou, China). Cells were transfected with sh-RNA or miRNA mimics at a final concentration of 100 or 60 nM, respectively. Transfections were carried out using Lipofectamie 2000 (Invitrogen, Carlsbad, CA, USA) following the manufacturer’s instructions.

Total RNA from primary tumors, adjacent normal mucosa or culture cells was isolated using TRIzol reagent (Invitrogen, Carlsbad, CA, USA), and then reversely transcribed to cDNA by using PrimeScript RT reagent Kit (Takara, Dalian, China) for mRNA and lncRNA, or by using miRNA cDNA First Strand Synthesis (Tiangen, Beijing, China) for miRNA, respectively. qRT-PCR was utilized to determine the levels of lncRNA, mRNA and miRNA by using a SYBR Green reagent (Takara, Dalian, China). The primer sequences can be found in Table S1. The relative RNA level was normalized to GAPDH or U6, and calculated by using 2−ΔΔCt method.

For plate colony formation assay, 1,000 cells were cultured in 6 cm plates with DMEM medium containing 10% FBS. Cells were fixed by methyl alcohol for 25 min and dyed with Giemsa solution for 30 min after 2 weeks. Visible colonies were counted and imaged. Experiments were independently repeated in triplicate.

For cell invasion assay, transwell chamber (Corning Costar) with membrane coated with Matrigel was used; 2×105 cells were seeded in the upper transwell chamber containing serum-free medium. Medium containing 10% FBS was added to the lower chamber. After incubation for 48 hours, cells that invaded through the membrane were fixed with methanol and then stained with 0.1% crystal violet, and then imaged by a microscope (magnification: ×200). Experiments were independently repeated in triplicate.

Antibodies against nuclear-β-catenin and Lamin B1 were purchased from Cell Signaling Technology (CST, MA, USA). Western blot procedures were performed as previously described (17). The protein signal was determined by using the ECL detection reagents (Millipore, USA).

MIR17HG is upregulated in colon cancer and predicts poor prognosis

We detected the expression levels of MIR17HG in 60 paired colon cancer specimens. As shown in Figure 1A, 61.67% (37/60) colon cancer tissues showed a more than 2-fold increase in MIR117HG levels compared with adjacent normal mucosa (P<0.001). It is worth noting that MIR17HG was also found to be significantly upregulated in TCGA dataset of colon cancer samples (starBase v3.0, http://starbase.sysu.edu.cn/panCancer.php), which further supported our findings (Figure 1B). Further analysis of the 60 paired colon cancer samples cohort revealed that high MIR17HG expression in colon cancer tissues was associated with lymph node metastasis (P=0.005) and TNM stage (P<0.001), whereas no relationship was observed between MIR17HG expression and the age, gender, tumor location or differentiation (Table 1). Moreover, patients with higher MIR17HG levels exhibited worse overall survival (log-rank test, P<0.001) and disease-free survival (log-rank test, P<0.001) (Figure 1C). Multivariate analysis manifested that high MIR17HG level was an independent predictor for poor prognosis of colon cancer patients (Table 2). Next, we examined the expression of MIR17HG in a series of cell lines. Among the colon cancer cell lines, especially in SW480 and Hct116 cells, the MIR17HG levels were increased as compared with that in the normal colon mucosa cell line FHC (Figure 1D). These data suggested that MIR17HG was significantly overexpressed in colon cancer and associated with poor prognosis. 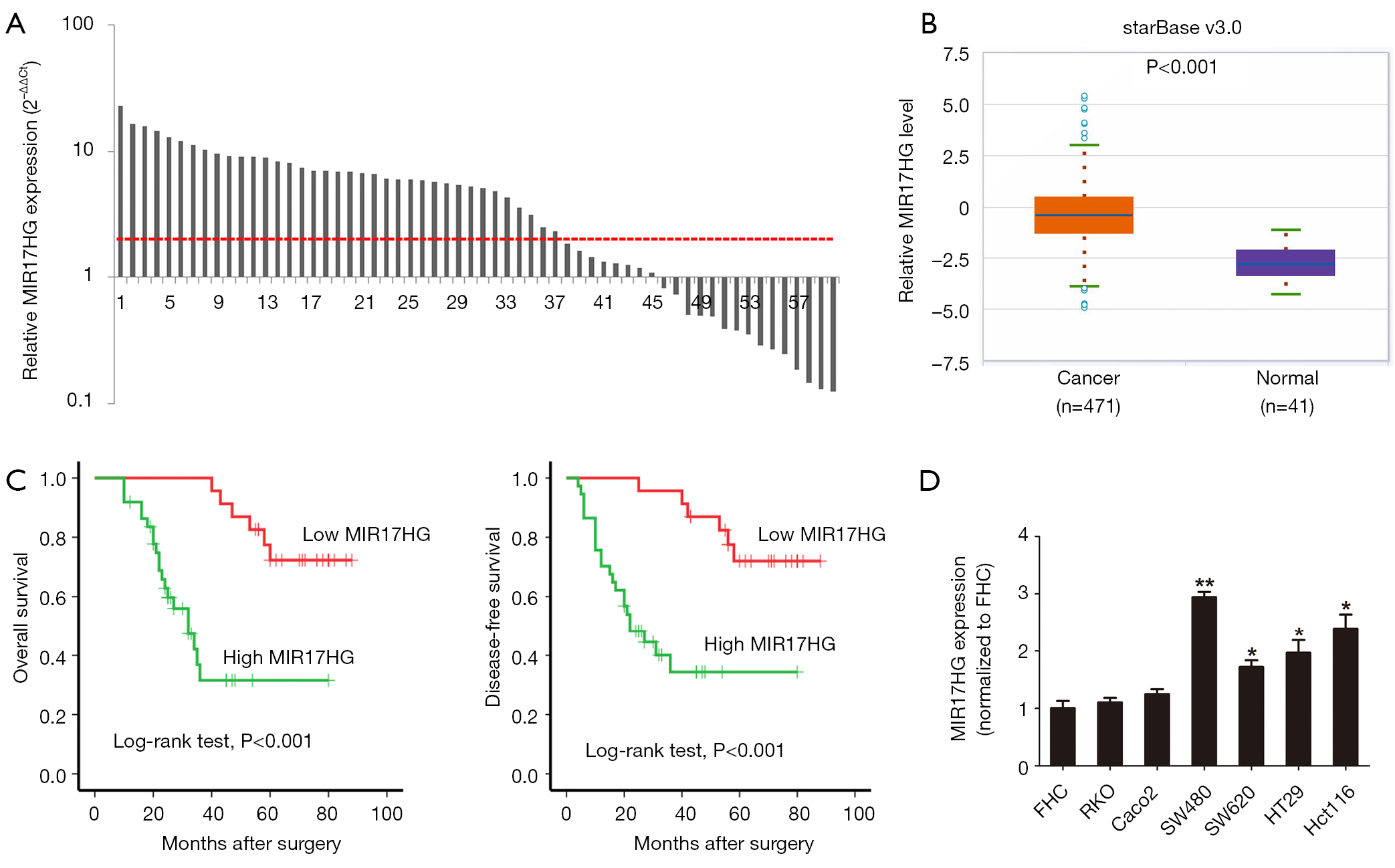 To assess the biological role of MIR17HG in colon cancer cells, we established stable MIR17HG knockdown models in SW480 and Hct116 cells. Successful knockdown of MIR17HG was confirmed via qRT-PCR analysis (Figure 2A). CCK-8 assays revealed that cell growth was significantly impaired in cells transfected with MIR17HG-shRNA compared with controls (Figure 2B). Similarly, knockdown of MIR17HG dramatically suppressed colon cancer cell colony formation abilities (Figure 2C). In addition, transwell assays showed that attenuation of MIR17HG inhibited cell invasion into Matrigel-coated transwell membranes (Figure 2D). Given that epithelial-mesenchymal transition (EMT) occurs during tumor progression, which provides cancer cells with metastatic properties, we next investigated the effect of MIR17HG knockdown on the expression levels of several EMT-related genes. As shown in Figure 2E, confocal immunofluorescent assays demonstrated that downregulation of MIR17HG increased the expression of epithelial marker E-cadherin with a simultaneous decrease in the expression of mesenchymal marker Vimentin. Furthermore, in vivo tumor xenografts experiment was also performed. We found that sh-MIR17HG transfected SW480 cells developed significantly smaller tumors than normal control group (Figure 2F,G,H). All these results indicated that suppression of MIR17HG inhibited the progression of colon cancer in vitro and in vivo. 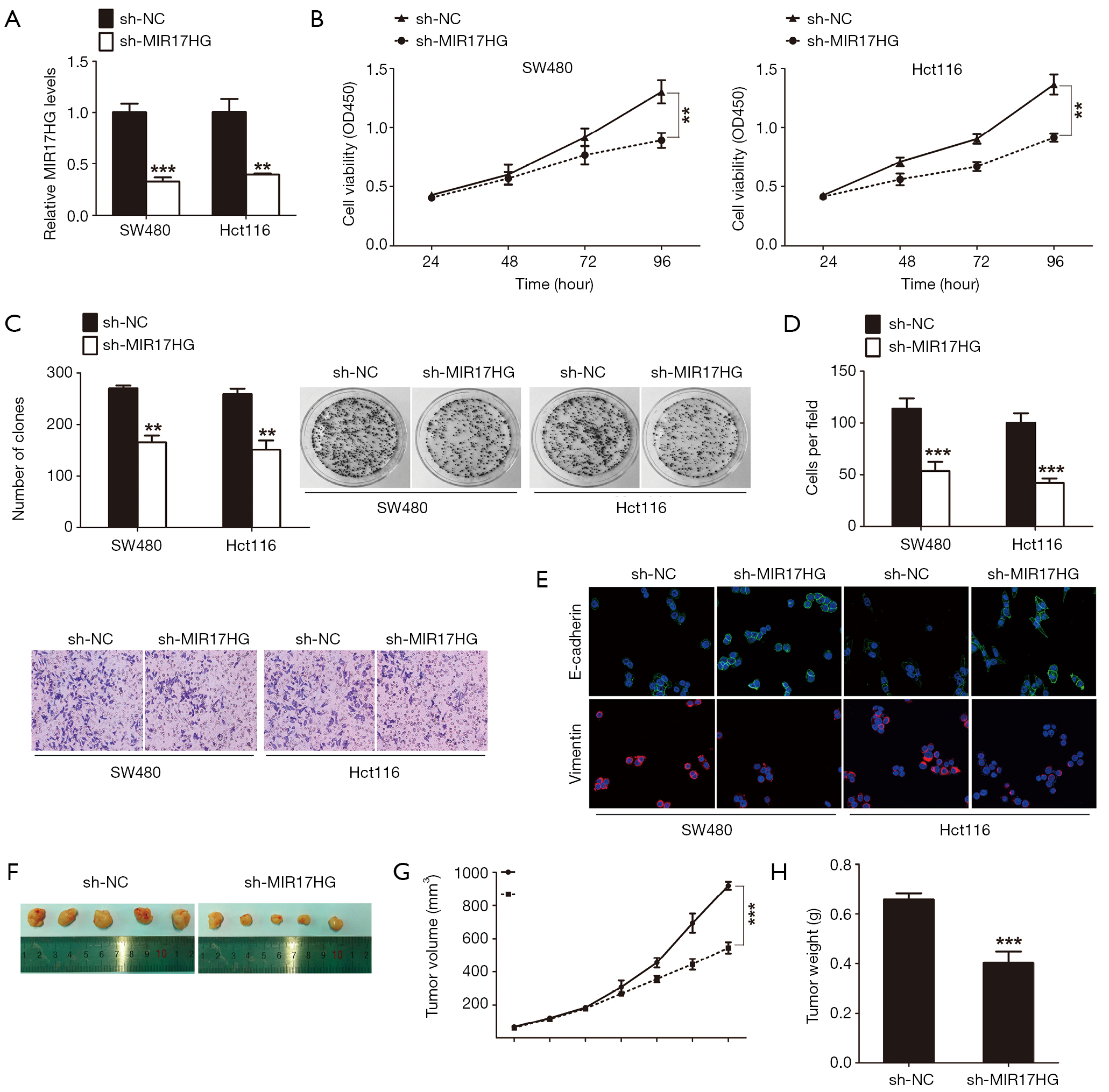 The lnc-miRHGs/miRNAs interaction may participate in the progression of human cancers (19). The miR-17-92 cluster, including miR-17, miR-18a, miR-19a, miR-19b, miR-20a, and miR-92a, has been associated with the development of a number of cancer diseases (20). Interestingly, MIR17HG was identified as a lnc-miRHG of miR-17-92 cluster (21). Therefore, to explore the possible effect of MIR17HG on miR-17-92 cluster members, we firstly profiled the expression levels of the six miR-17-92 family miRNAs in colon cancer cells in response to MIR17HG inhibition. As a result, miR-17 and miR-18a were significant downregulated in MIR17HG knockdown cells (Figure 3A,B). Furthermore, based on the 60 paired clinical samples, we found that miR-17 and miR-18a were markedly upregulated in colon cancer tissues compared with adjacent normal mucosa (Figure 3C,D). As expected, MIR17HG transcript level was positively correlated with miR-17 or miR-18a level, respectively (Figure 3E,F). These findings demonstrated a crucial role of MIR17HG in regulating miR-17 and miR-18a. 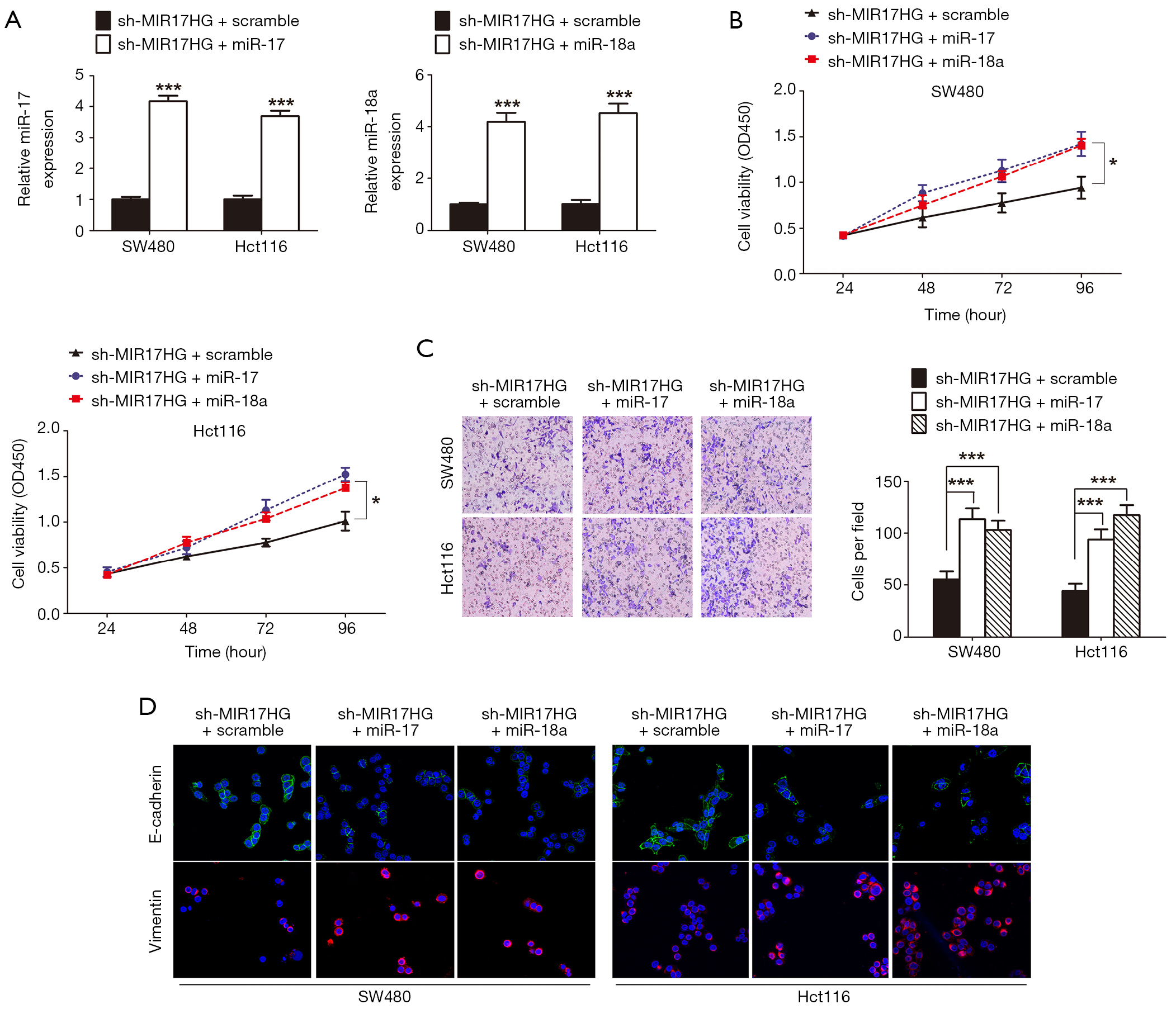 The redistribution of cytoplasmic β-catenin to nuclear localization which reflects the canonical signaling activation is known as one of the most vital mechanism in colon cancer (18). In the supplementary experiment, immunochemistry staining was performed to assess the β-catenin expression in our sample cohort. As expected, we found that nuclear accumulation of β-catenin was a frequent event in colon cancer tissues (Figure S1). As miR-17 and miR-18a could regulate Wnt/β-catenin signaling (22,23), we wondered whether this signaling confers the progression of colon cancer through involving in the MIR17HG-miR-17/miR-18a axis. Western blot analysis showed that depletion of MIR17HG in colon cancer cells resulted in decreased nuclear accumulation of β-catenin, whereas miR-17 or miR-18a overexpression abolished above effect (Figure 5A). Additionally, a series of downstream target genes of Wnt signaling, including c-Myc, Cyclin D1 and Survivin, were also downregulated in both SW480 and Hct116 cells after MIR17HG inhibition, whereas miR-17 or miR-18a overexpression abrogated the MIR17HG knockdown effect on these targets (Figure 5B). Moreover, CHIR99021, the activator of Wnt/β-catenin signaling, was utilized in further study. We found that induction of CHIR99021 re-activated the Wnt/β-catenin signaling in MIR17HG-knockdown cells (Figure 5C). Furthermore, in vitro assays revealed that depletion of MIR17HG decreased the proliferative and invasive abilities of SW480 and Hct116 cells, and these effects were rescued by activating Wnt/β-catenin signaling (Figure 5D,E). These findings suggested that Wnt/β-catenin signaling was required for the oncogenic role of MIR17HG-miR-17/miR-18a axis in colon cancer. 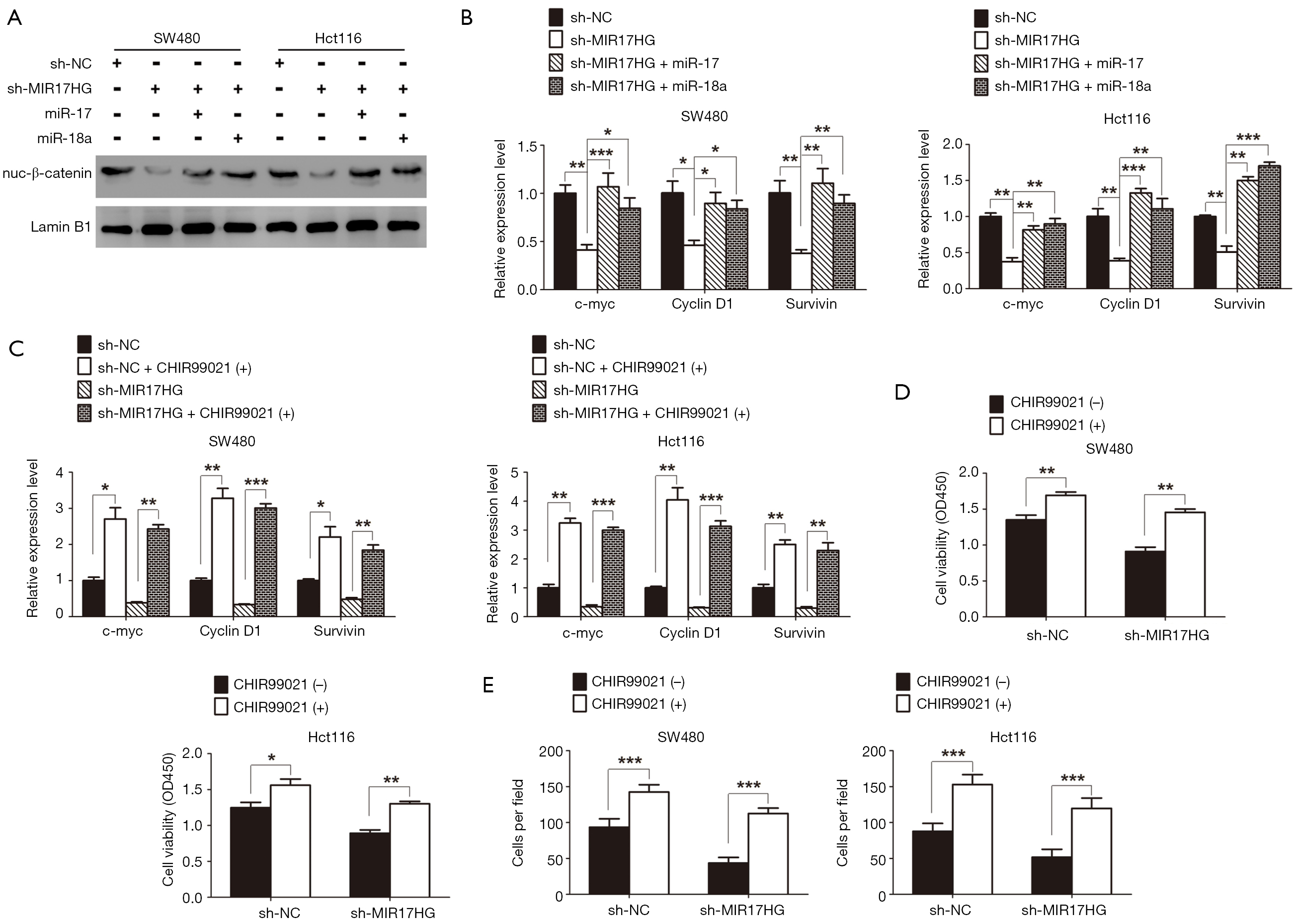 In this study, we reported that lncRNA MIR17HG, which acts as the lnc-miRHG of miR-17-92 cluster, promotes colon cancer progression by upregulating miR-17 and miR-18a, two family members of miR-17-92 cluster, and then activating Wnt/β-catenin signaling. To our knowledge, this is the first report for MIR17HG-miR-17/18a-Wnt/β-catenin signaling axis.

LncRNAs are a group of non-coding RNAs with limited protein-coding capacity. Growing evidences have demonstrated a great deal of lncRNAs in regulation of various physiologic or pathologic processes (5,6). As a novel identified lncRNA, MIR17HG is categorized as miRNA-host gene lncRNA. Its gene locus is located on chromosome 13q31.3 and encodes the miR-17-92 gene cluster (21). The six mature miRNAs, including miR-17, miR-18a, miR-19a, miR-19b, miR-20a, and miR-92a, which derived from miR-17-92 cluster have been found to be amplified in plenty of malignancies and be linked to poor prognosis (24-26). Nevertheless, as the lnc-miRHG of miR-17-92 gene cluster, MIR17HG participating in the regulation of tumor progression are still seldom reported up to now. Here, we provide a new insight into the function of MIR17HG in colon cancer, and unveil that MIR17HG is clinically significant and might be used as a potential biomarker in colon cancer.

Since colon cancer is a heterogeneous tumor, it can be divided into different pathological types and molecular subtypes. A good understanding of these heterogeneities is important for the proper diagnosis and management of patients. On the other hand, some characteristics, such as MS status (mismatch repair) and KRAS/NRAS/PIK3CA mutation status, have been identified as the important features of colon cancer (30,31), and it would be interesting and significant to investigate their association with colon cancer. These are the focus of our future research.

In summary, we mainly focused on the downstream mechanism by which MIR17HG participates in colon cancer progression in this study. Our findings highlight the importance of lnc-miRHG/miRNA interaction in tumor progression. Taken together, the identification of MIR17HG and the involvement of lnc-miRHG/miRNA interaction in the aberrant MIR17HG-miR-17/18a-Wnt/β-catenin signaling axis may provide a promising option for investigation of tumors.

We thank Zhaofeng Zhu for his excellent technical assistance.

Ethical Statement: The authors are accountable for all aspects of the work in ensuring that questions related to the accuracy or integrity of any part of the work are appropriately investigated and resolved. The present experiment was approved by the Institutional Ethics Committee of Taian City Central Hospital (approval No. TACH-20170414). All subjects were completely informed about the study goals and procedure and provided their signed informed consent.