Despite the widespread use of transarterial chemoembolization (TACE), which contributes to antitumor effects and selective ischemia of a targeted tumor to kill the tumor cells (6,7), the conventional TACE (cTACE) is performed using lipiodol and chemotherapeutic agents. However, there still exist some limitations in containing the systemic toxicity caused by the flow of chemotherapeutics in the circulation system and the incapacity to precisely regulate drug release, thereby rendering cTACE ineffective (8,9). To reduce these drawbacks, the drug-eluting bead TACE (DEB-TACE), a novel drug delivery system using microspheres as embolic agents loaded with chemotherapy drugs, has been introduced into clinical practice, and offers higher intratumoral concentration and lower systemic drug concentrations when compared to cTACE, decreasing systemic adverse drug reactions and liver toxicity (10-13).

Fifty-five patients with secondary liver cancer underwent DEB-TACE treatment between 2015/11/12 and 2016/11/04 from a CTILC study. The study was a multi-center, prospective cohort study which was registered on clinicaltrials.gov (registry No. NCT03317483) and consecutively enrolled 367 liver cancer patients from 24 medical centers to investigate the efficacy, safety, and prognostic factors of DEB-TACE treatment in Chinese patients with liver cancer. It provided additional and convincing evidence for the role of DEB-TACE treatment in Chinese patients with liver cancer (18). The inclusion criteria for patients of the CTILC study were as follows: (I) diagnosed as primary HCC, primary ICC, or secondary liver cancer confirmed by pathological findings, clinical features, or radiographic examinations according to the American Association for the Study of the Liver Diseases (AASLD) guidelines; (II) age above 18 years; (III) about to receive DEB-TACE treatment with CalliSpheres® according to clinical needs and patients’ willingness; (IV) able to be followed up regularly; (V) life expectancy above 12 months. The exclusion criteria were as follows: (I) history of liver transplantation; (II) history of hematological malignancies; (III) severe hepatic failure (Child-Pugh score of ≥10) or renal failure; (IV) contraindication for angiography, embolization procedure, or artery puncture; (V) cognitive impairment, or unable to understand the study consents; (VI) women in gestation or lactation period. This study was approved by the Ethics committee of the Zhejiang Cancer Hospital. All the patients or their legal guardian provided the written informed consent. This study was conducted according to the Declaration of Helsinki.

TACE was carried out using a micro-puncture system via placing a 5F vascular introducer (Boston Scientific, USA) through a transfemoral arterial access route. Angiography of the hepatic artery was executed to provide the liver’s vascular anatomy. The CalliSpheres® (Jiangsu Hengrui Medicine Co, Ltd., China) DEB loading was performed as follows: after the injection of CBs to the chemotherapy reagent solution was performed, the mixed solution was shaken up every 5 minutes for 30 minutes in an injector at a temperature of 23–28 °C. After that, adding non-ionic contrast agent into the same injector was performed at the ratio of (1–1.2):1 compared to the mixed solution and placed for 5 minutes at a temperature of 23–28 °C for use. Two mL 100–300 µm CalliSpheres® DEBs (Jiangsu Hengrui Medicine Co, Ltd., China) loaded with 50–80 mg of anthracyclines (doxorubicin) for metastatic lung cancer and breast cancer patients, and 100–200 mg irinotecan for intestinal cancer, gastric cancer, and pancreatic cancer patients, were used and administered until stasis in each patient. After the procedure, patients were admitted and monitored to the hospital overnight.

Overall survival (OS) was defined as the time from the DEB-TACE operation until the date of death from any causes. The median follow-up duration was 171 days (range, 38–404 days), and the last follow-up date was December 28th, 2016.

As listed in Table 1, the mean age of those 55 patients with secondary liver cancer undergoing DEB-TACE treatment was 64.33±10.96 years. Female and male patient sample sizes were 25 and 30 respectively. 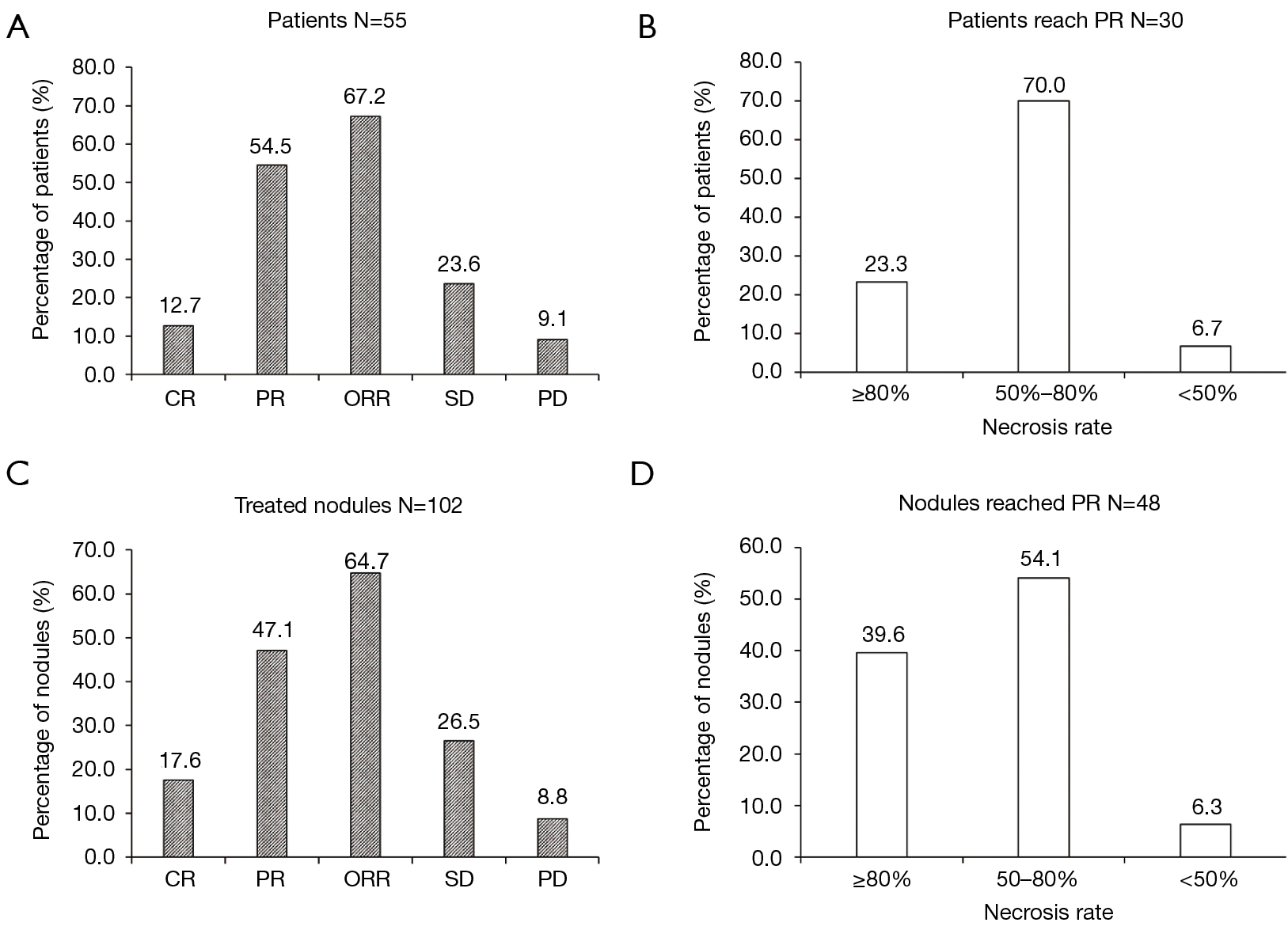 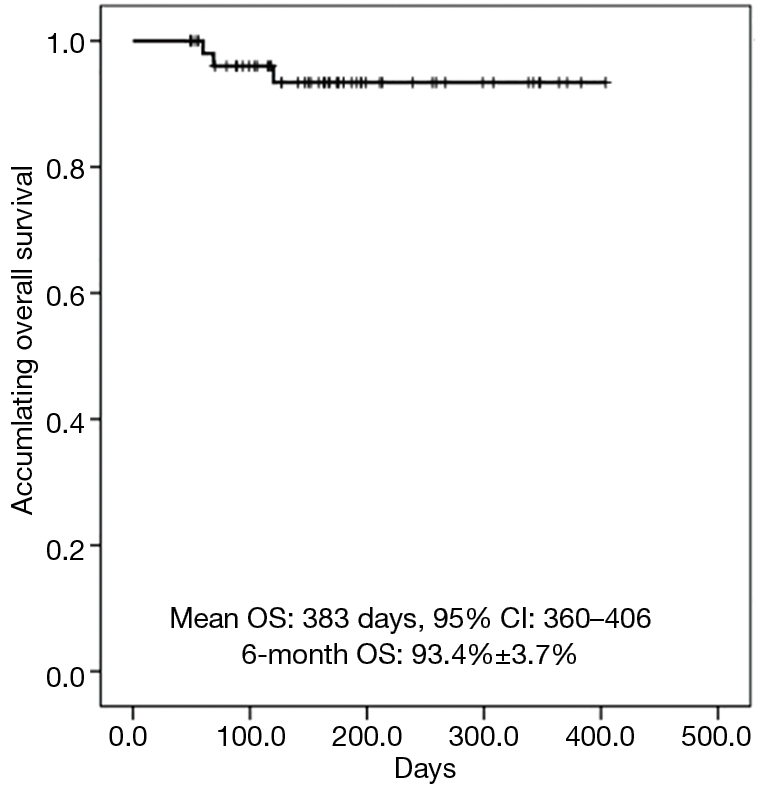 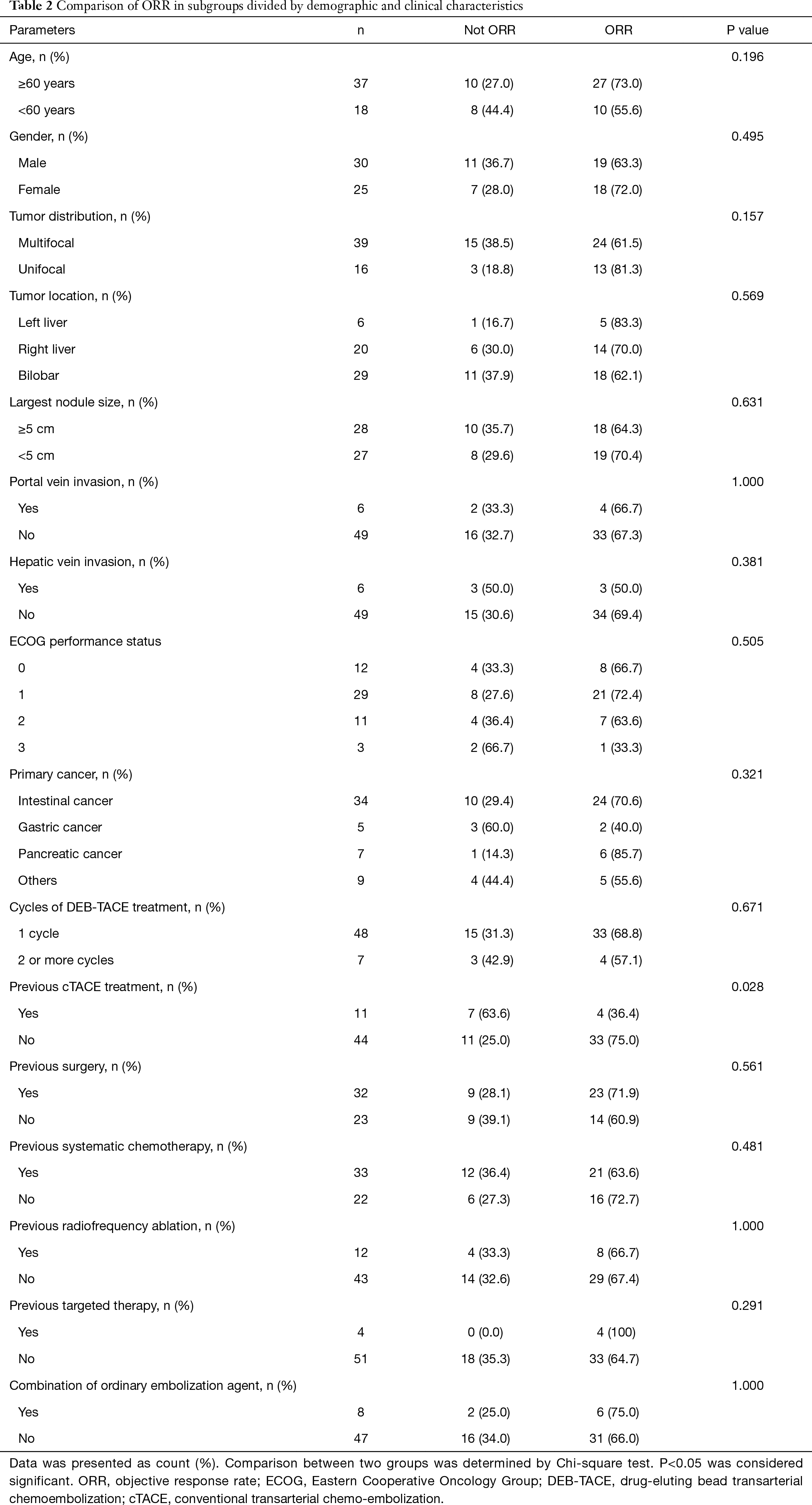 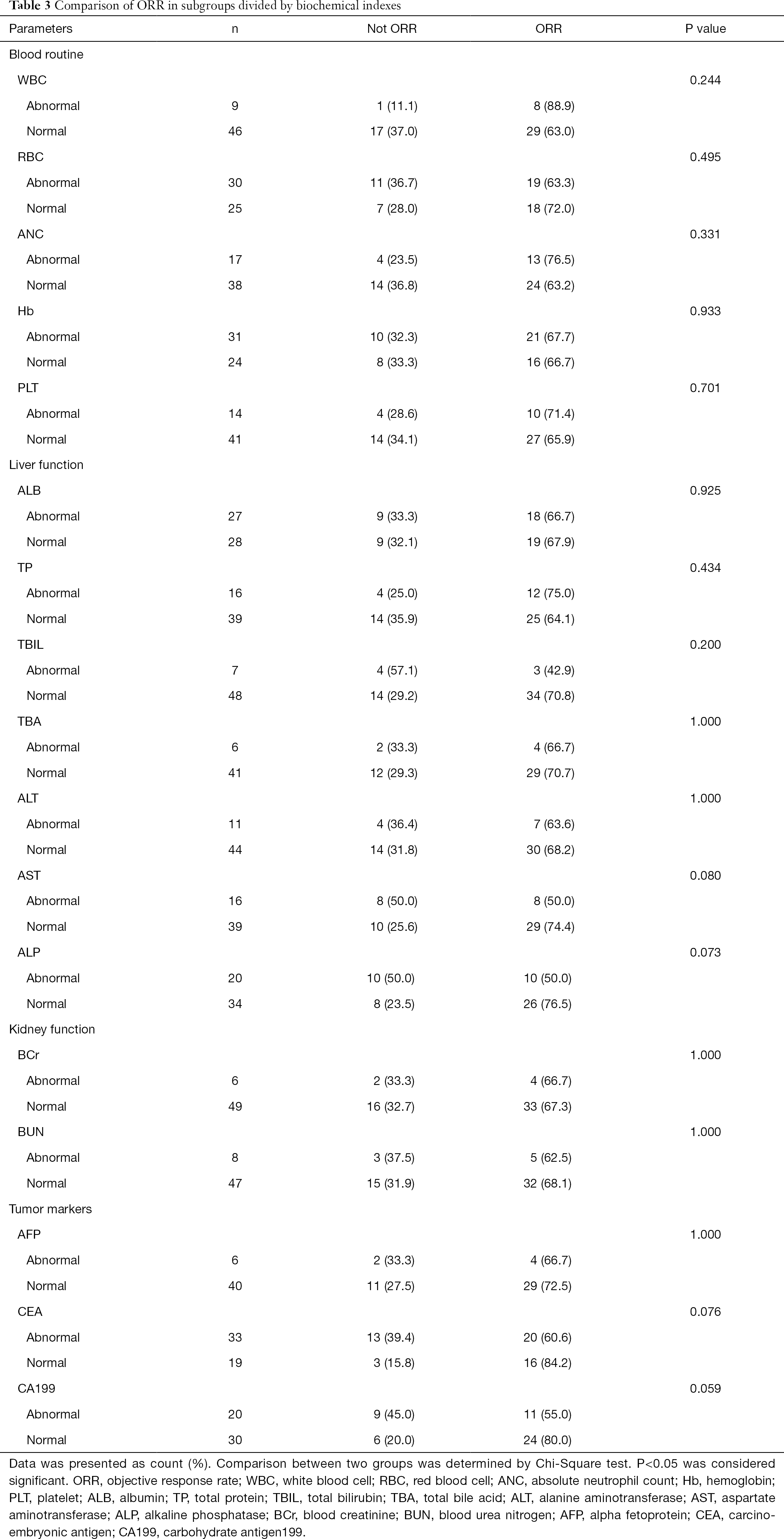 Univariate logistic regression was used to analyze the factors affecting ORR achievement, which indicated that previous cTACE treatment (P=0.021) was negatively correlated with ORR achievement (Table 4). Multivariate logistic regression was further performed to analyze all factors with a P value no more than 0.1. It revealed that previous cTACE treatment (P=0.057) and CEA (P=0.096) seemed to be independent factors for ORR achievement in secondary liver cancer patients but without statistical significance. 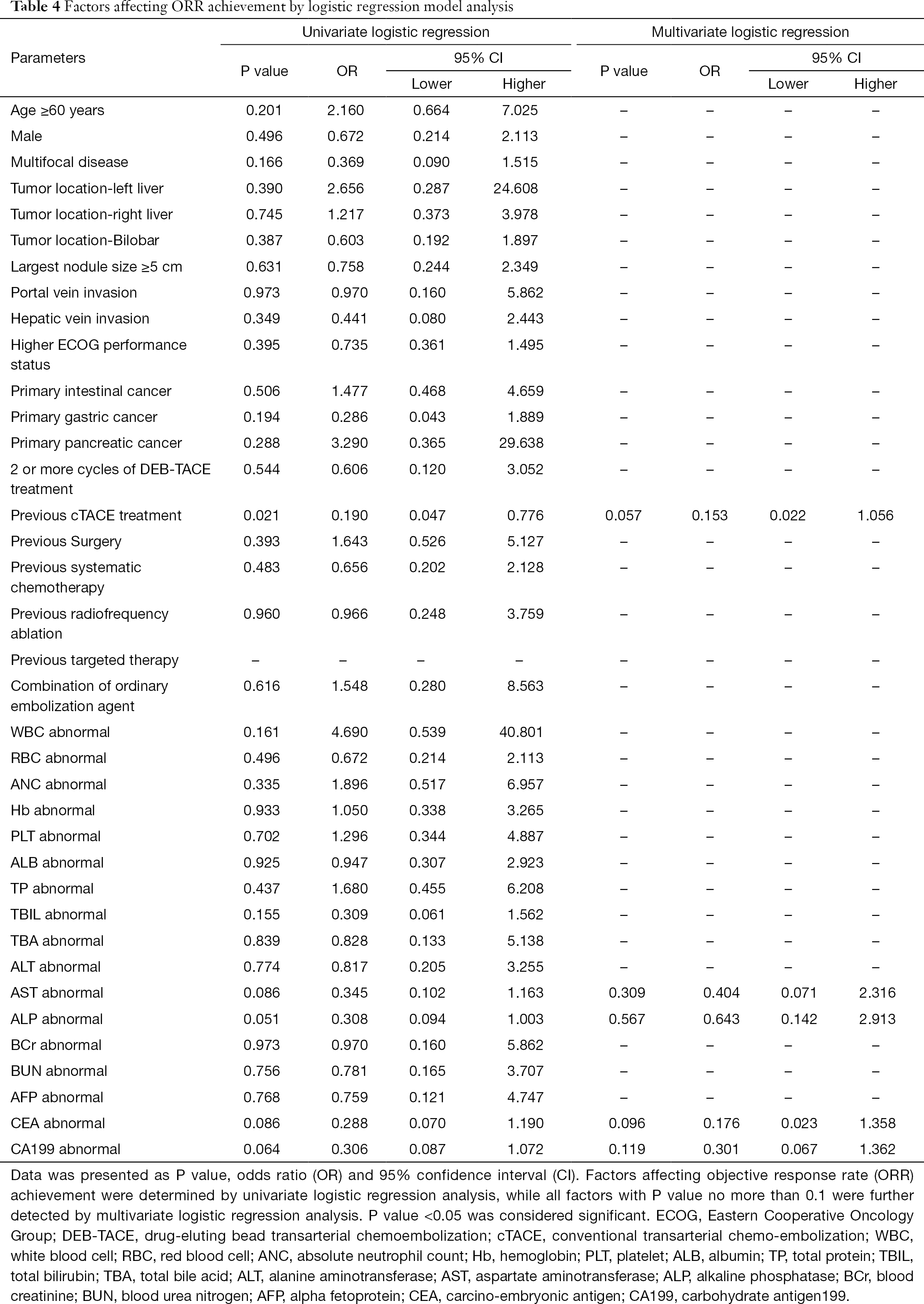 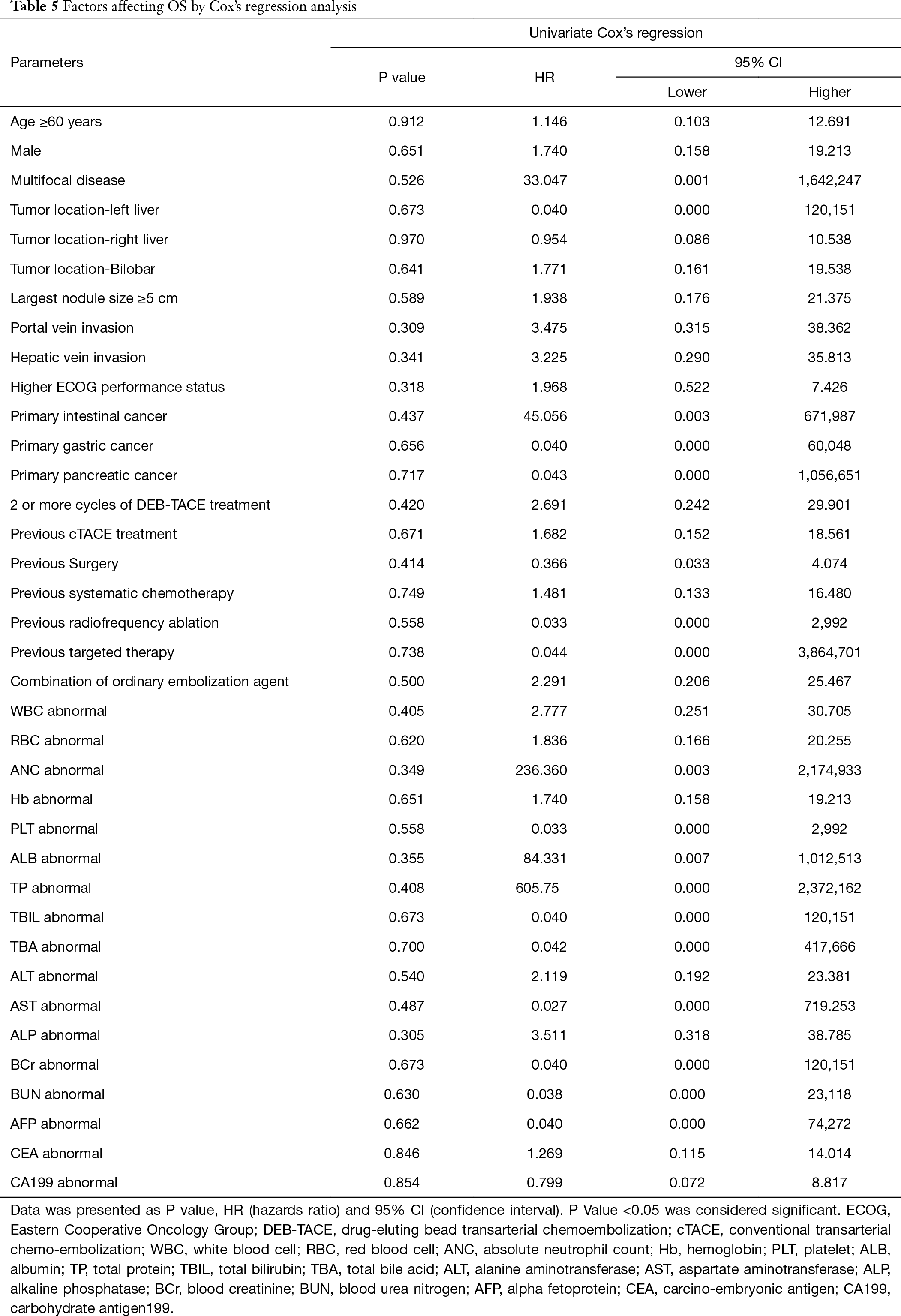 Liver function before and after DEB-TACE treatment 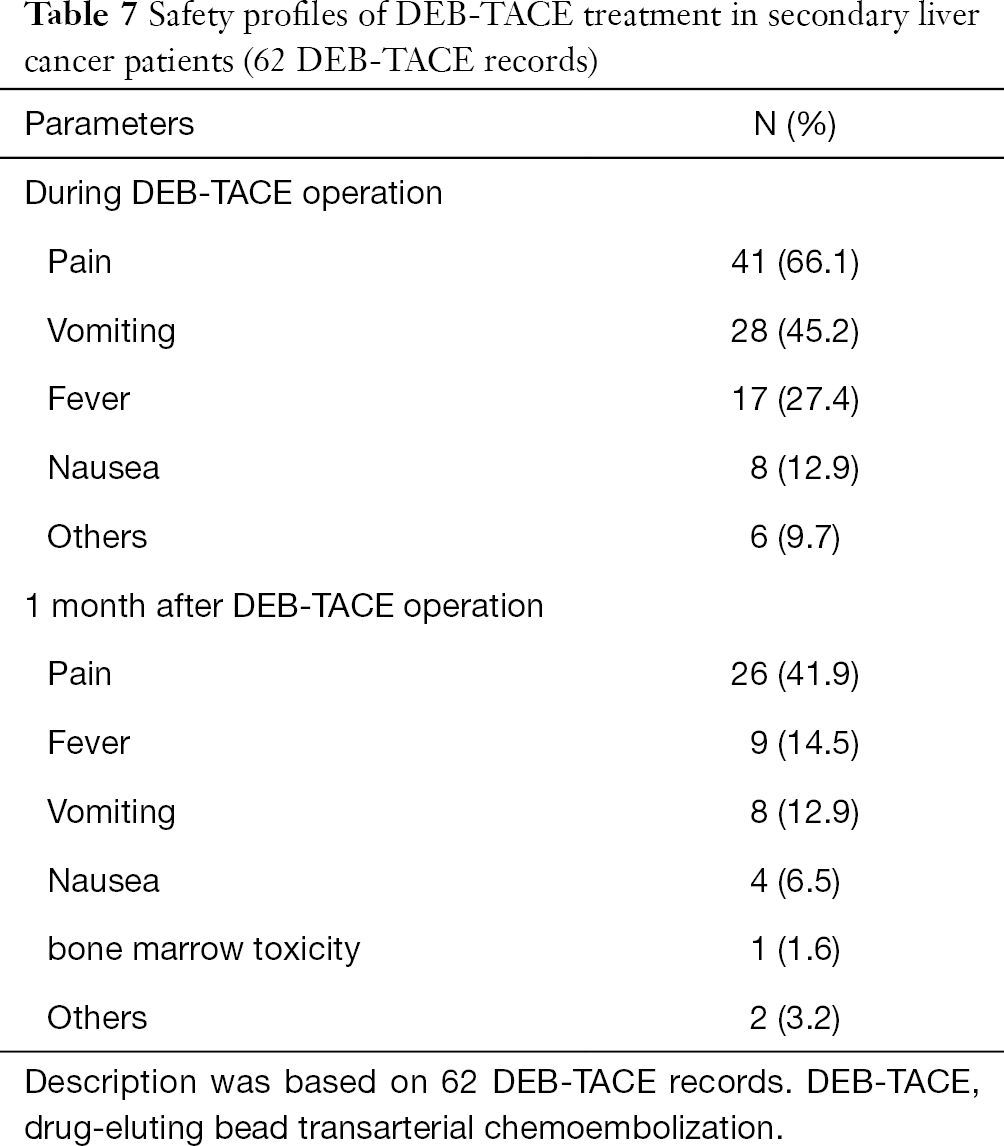 In the present study, we observed that in patients with secondary liver cancer after DEB-TACE treatment, (I) the CR and ORR were 12.7% and 67.3% respectively, and the mean OS was 383 d (95% CI: 360–406). (II) Also, previous cTACE treatment was associated with a worse ORR, and univariate and multivariate logistic analyses revealed that previous cTACE treatment and CEA were likely to be independent risk factors for ORR but without statistical significance, while Cox analysis indicated that no predictive factor of OS in patients with secondary liver cancer was found. (III) Additionally, liver function indexes were deteriorative 1 week post-DEB-TACE, while at 1–3 months post-DEB-TACE, most of liver function indexes returned to baseline levels.

Liver metastases frequently occured in a large number of patients with primary cancers; these patients’ metastatic process typically occurs with invasive tumor cells being separated from the primary site into circulation, with these circulating cancer cells subsequently adhering to sinusoidal endothelial cells by specific sets of adhesion molecules, thereby arresting at the site of the liver and finally colonizing in the liver (19). TACE with drug-eluting microspheres, serving as a new therapeutic approach, is characterized by delivering the chemotherapeutics through microspheres to achieve ischemic tumor effect, and a more controlled release of chemotherapeutic and sustained drug concentration (16,17). However, few studies have explored the role of DEB-TACE in patients with secondary liver cancer; thus, our study enrolled 55 patients with secondary liver cancer and evaluated the efficacy of DEB-TACE in treatment response and OS.

Regarding OS, a previous short-term study with a 12-month follow-up duration revealed that DEB-TACE (loaded with irinotecan) led to a mean OS of 11.7 months, which is better than a mean OS of 5.7 months in HCC patients treated with cTACE (23). In another study, survival rates of HCC patients receiving DEB-TACE at 1 and 2 years were 65% and 55% respectively (24). As for patients with colorectal liver metastasis, the percentage of 1-year OS occurring post-DEB-TACE was found to be 75% (25). However, for patients with secondary liver cancer treated with DEB-TACE, we observed a mean OS of 383 days (95% CI: 360–406), and a rate of 6-month OS of 93.4%±3.7%. Therefore, OS observed in this study was numerically similar to that in HCC patients after DEB-TACE, while it was numerically better compared to patients with liver metastasis in previous studies. However, the follow-up duration was short in the present study. Thus, a longer follow-up duration is much needed in further study.

In the present study, we also observed that previous cTACE treatment was a risk factor for ORR achievement. The possible reasons were as follows: (I) retreatment with TACE might accumulate liver deterioration, leading to worse treatment response; (II) previous cTACE treatment might increase drug resistance, thereby resulting in worse treatment response. However, no other predictive factor for ORR achievement was identified in this study apart from previous cTACE treatment in secondary liver cancer patients post-DEB-TACE. Recent data illustrates that tumor size and tumor location serve as independent predictive factors for treatment response to DEB-TACE in HCC patients (26). The possible reasons are that the sample size in our study was relatively small, leading to lower statistical efficiency compared to more extensive sample size studies. Thus, the predictive effects of these baseline factors were not apparent. However, we did not find any potential factor predicting OS in patients with secondary liver cancer post-DEB-TACE. These might partially result from the relatively small sample size and short follow-up duration, leading to a lack of death events.

The effect of DEB-TACE on liver function was also evaluated, which suggested abnormal TP, TBIL, ALT, and AST were increased 1 week post-DEB-TACE compared to baseline, while, at 1–3 months post-DEB-TACE, these four indexes returned to baseline. This rapid worsening of liver function in patients might result from the fact that liver function can be impaired by invasion, and healthy liver tissue can be damaged by vascular occlusion during a DEB-TACE procedure. On the other hand, the liver has the self-recovery capability and regeneration capacity that contributes to the recovery of liver impairment caused during DEB-TACE procedure; thus, liver function indexes would return to baseline after the short-term deterioration. Moreover, we also observed that the percentage of abnormal ALP was similar to baseline, while it notably increased at 1–3 months post-DEB-TACE. ALP is an important enzyme known to catalyze the hydrolytic removal of phosphate from a variety of molecules, and its concentration may be affected by some drugs, such as anthracyclines and irinotecan which were loaded into the DEBs used in this study; these might partially explain the increase of ALP post procedures. However, according to a previous meta-analysis, the results of liver function indexes, including AST, TBIL, ALB, and prothrombin (PT), increased compared to baseline in HCC patients after the procedure of both DEB-TACE and cTACE (27).

It has been demonstrated that, in safety profiles for post-DEB-TACE, the most common AEs were abdominal pain, transient fever, fatigue, and nausea (16,17). In line with these studies, we also observed that during DEB-TACE, pain, vomiting, and fever were the most frequent AEs, while at 1-month DEB-TACE operation pain was the most common AE and only 1 case of bone marrow toxicity occurred. There were no severe AEs during and 1 month after DEB-TACE operation. Therefore, these results suggest that DEB-TACE was well-tolerated in patients with secondary liver cancer.

Despite these new findings, some limitations still exist. First, the sample size in this study was relatively small, and so further study should recruit more patients with secondary liver cancer. Second, this was a cohort study with a single arm; an RCT study enrolling more than 1,000 patients that explores the comparison of effects in treatment responses and OS between DEB-TACE and cTACE is much needed. Third, the follow-up duration was relatively short; analysis of the long-term efficacy of DEB-TACE in patients with secondary liver cancer is necessary.

In conclusion, DEB-TACE was efficient and well tolerated in treating patients with secondary liver cancer.

Ethical Statement: The authors are accountable for all aspects of the work in ensuring that questions related to the accuracy or integrity of any part of the work are appropriately investigated and resolved. This study was approved by the Ethics committee of the Zhejiang Cancer Hospital. All the patients or their legal guardian provided the written informed consent. This study was conducted according to the Declaration of Helsinki.