Alcohol consumption is one of the leading modifiable causes of cancer deaths. The impact of alcohol intake on cancer survivors is gaining more attention with a growing number of cancer survivors. Approximately more than one third of men and women will be diagnosed with cancer during their lifetimes in the United States (1). With improvement of cancer screening, diagnosis, and treatment, the 5-year relative survival rate was more than 60% for all cancers diagnosed during 2008 through 2014 (2). It was estimated that the number of cancer survivors will increase from 15.5 million to 20.3 million from 2016 to 2026 in the United States (1). It is well known that health behaviors such as smoking, physical activity, and alcohol play an important role in cancer progression (3). Heavy alcohol intake is strongly associated with increased deaths from alcohol-related cancers and total mortality (4). In addition, it has been reported that alcohol use contributed to approximately 3.5% of all cancer deaths and approximately 18 years of potential life lost for each alcohol-related cancer death (5). Specifically, 30% of alcohol-related cancer deaths were attributed to heavy drinking (5).

Various alcohol drinking patterns have different impact on cancer prognosis and cancer related deaths. Based on a US national-based study (6), the excessive alcohol intake (heavy or frequent binge drinking) increases risk of cancer-related mortality and overall mortality compared with lifetime infrequent drinkers after adjusting for demographic and lifestyle factors. However, the same study reported no significant or protective impact of the intermediate level of alcohol intake (light/moderate or occasional binge drinking) on cancer-related mortality. The alcohol drinking behaviors of cancer survivors have been widely discussed. However, the majority of studies only tested the dichotomized pattern of alcohol intake (7,8), such as heavy (yes vs. no), binge vs. non-binge (yes vs. no), and risky alcohol intake (yes vs. no). Another study evaluated the combination of moderate and heavy level of drinking (9). Little is known about the pattern of intermediate alcohol intake (light/moderate or occasional binge) for cancer survivors. In order to thoroughly understand alcohol intake for cancer survivors, it is essential to separately evaluate these distinct alcohol intake patterns.

A total of 193,197 adults (16,504 cancer survivors and 176,693 non-cancer individuals) in six 1-year survey cycles [2012–2017] performed by the National Health Interview Survey (NHIS) were included in this study. The NHIS is a nationally representative survey designed for monitoring the health of the civilian non-institutionalized population of the United States, conducted by the National Center for Health Statistics of Centers for Disease Control and Prevention. The eligibility criteria of the study population included those with age ≥18 years old and with valid information in alcohol intake and cancer status (yes/no). All alcohol drinking related variables used in this study were based on the status of the past year prior to the interview time. In order to ensure only post-cancer alcohol behaviors were analyzed, we excluded the 268 cancer survivors with a missing value of cancer history and 2,651 recently diagnosed (<2 years) cancer survivors. NHIS was approved by the Research Ethics Review Board of the National Center for Health Statistics and the U.S. Office of Management and Budget. Oral consent was provided for all NHIS respondents.

The three cancer related factors of interest are cancer status (yes/no), cancer type (alcohol-related cancer or not), and length of cancer history. The length of cancer history was calculated based on difference between interview age and cancer diagnosis age, which was recorded as integers. In order to address the rounding issue of this cancer history calculation and completely exclude those who had a cancer diagnosis during the reported alcohol intake period (1-year prior interview), we excluded cancer survivors with <2 years of cancer history. The primary cancer type for each cancer survivor was determined using the first diagnosed cancer. If there were multiple cancers diagnosed at the same age, then the most common cancer type was treated as the primary cancer. In this study, the alcohol-related cancer type was defined as breast, colon/rectum, liver, mouth/throat, larynx, and esophagus cancers (15).

The participants’ demographic, smoking behavior, and cancer characteristics by alcohol intake status were summarized using descriptive statistics. The differences of categorical variables in the sub-groups of alcohol intake were tested using the Rao-Scott chi-square tests; and the differences of continuous variables were tested using the ANOVA test. In order to evaluate cancer related factors (binary cancer status, cancer type and length of cancer history) associated with current alcohol drinking status, a logistic regression model with the appropriate sampling weights was applied. For testing the impact of these cancer related factors on heavy and binge drinking status, the weighted multinomial logistic models were applied. Both univariate and multivariable models adjusted for the selected five demographic factors (age, gender, race, education level, marital status) and smoking status. The sampling weights based on the NHIS guideline (17) were applied for all analyses. A P value of less than 0.05 was considered statistically significance. All statistical analyses were conducted using SAS 9.4 (SAS Institute, Inc., Cary, North Carolina).

We analyzed the complex patterns of alcohol intake of the 16,504 cancer survivors and 176,693 non-cancer individuals in the 2012–2017 NHIS. The demographic characteristics of the eligible adults are shown in Table 1. The mean age for the study samples was 46.82; 51.9% were female, 74.8% were non-Hispanic Caucasian, 62.0% were with a greater than high school degree, 57.3% were married or living with partner, and 16.2% were current smokers. 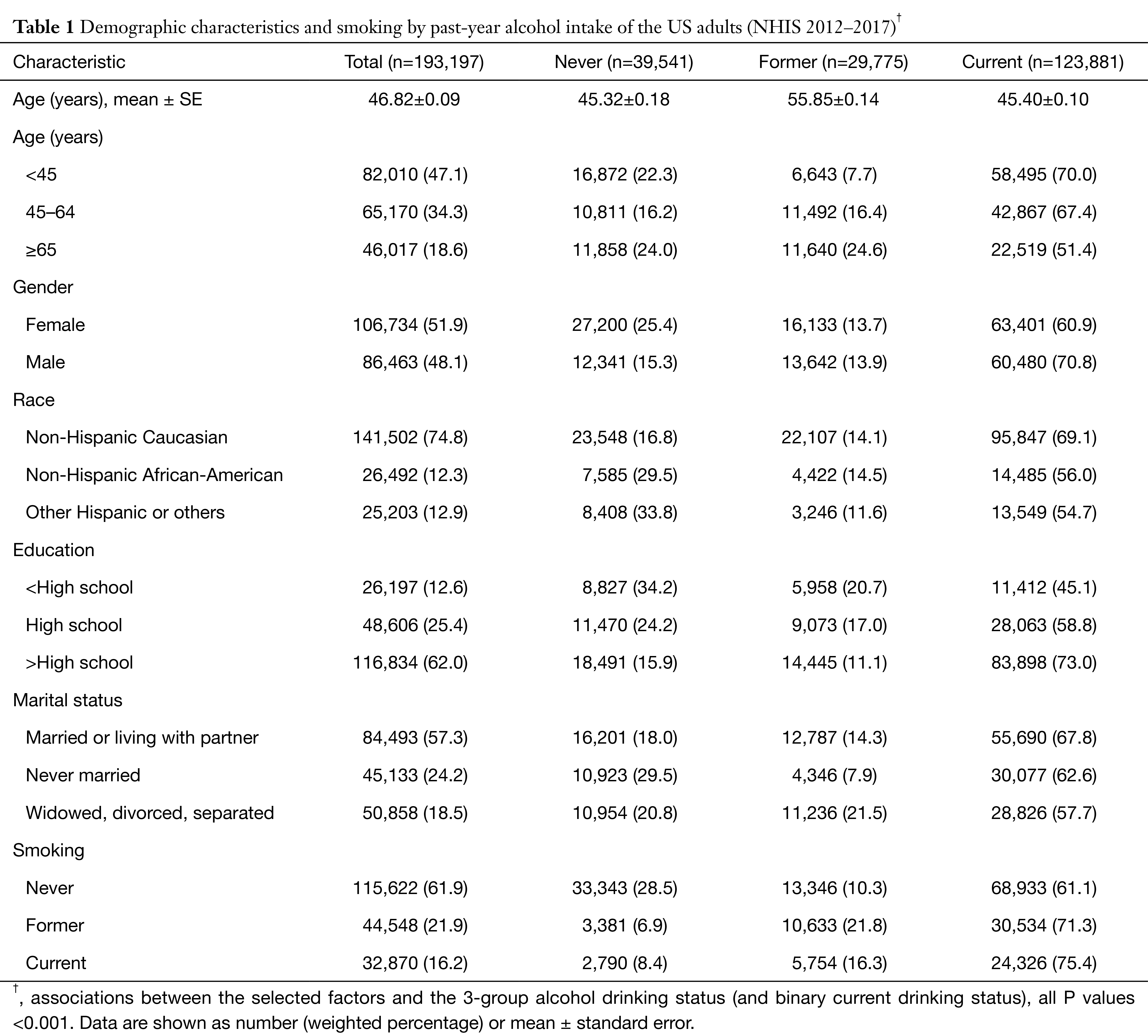 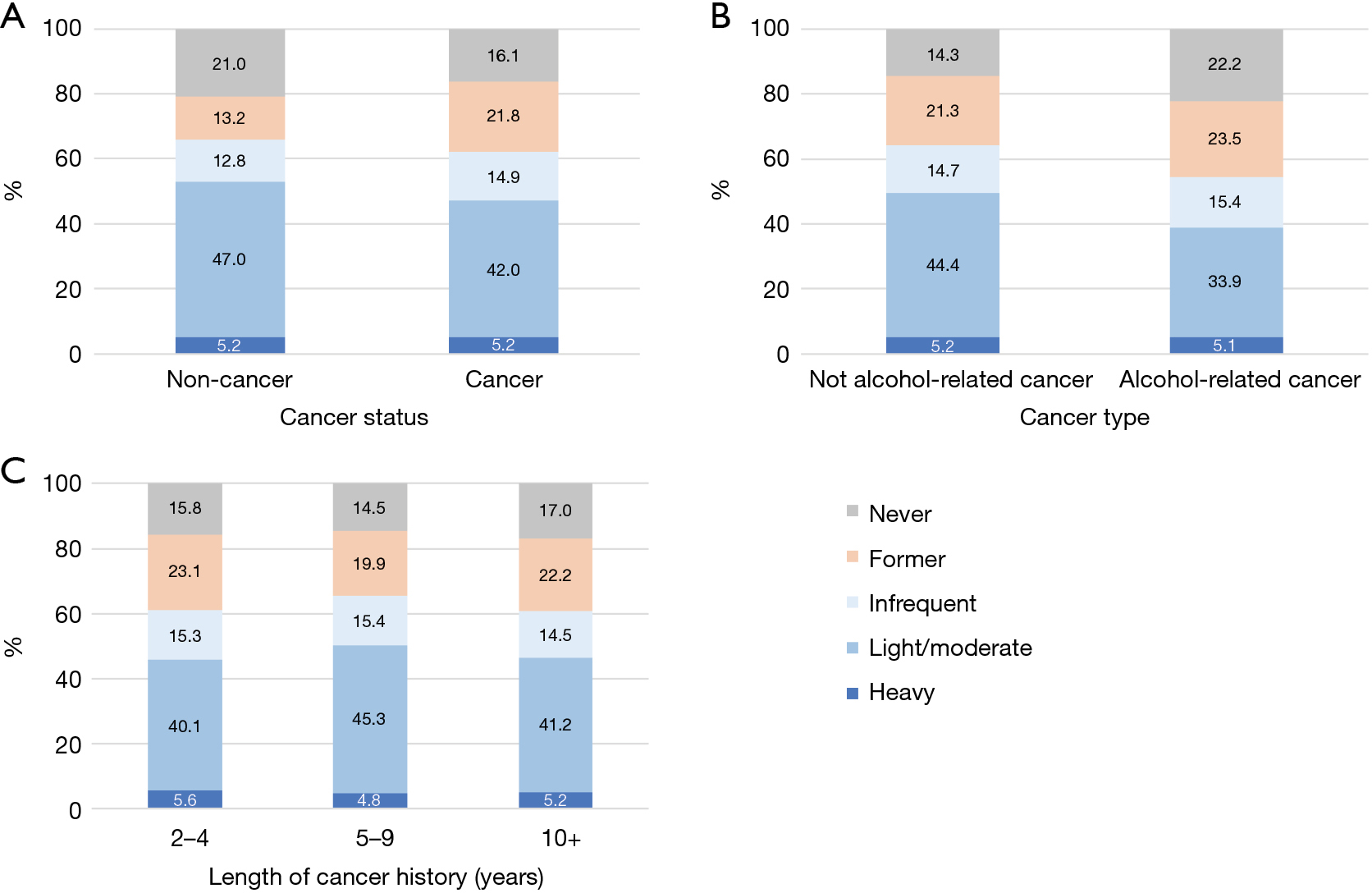 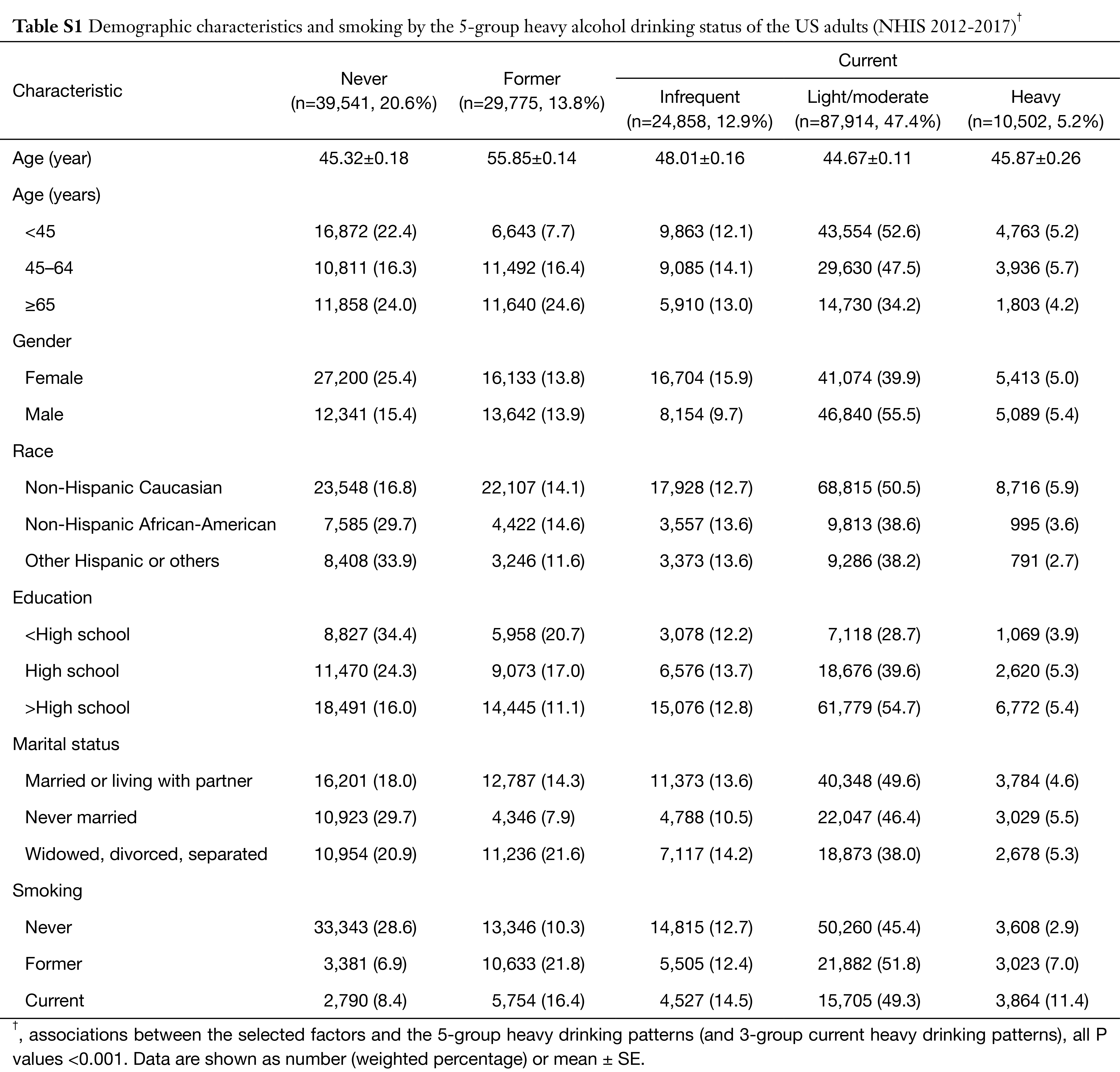 The prevalence of heavy drinking was the same for those with and without cancer (both 5.2%). For those who currently drank alcohol, we were interested in testing whether the cancer status (yes/no) had an impact on amount of alcohol intake status. After adjusting for the selected factors, cancer survivors were less likely to be light/moderate drinkers versus infrequent drinkers (OR=0.88, P<0.001) compared to non-cancer individuals, but cancer status did not have a significant impact on heavy drinkers versus infrequent drinkers (P=0.089). For alcohol drinking amount by cancer types (Figure 1B), prevalence of heavy drinking was similar among individuals with alcohol-related cancer, and non-alcohol related cancer (5.2% and 5.1%, respectively, P=0.950). The alcohol-related cancer type did not have a significant impact on amounts of alcohol drinking after adjusting for the selected factors (P=0.731 for light/moderate and P=0.132 for heavy vs. infrequent, Table 3). For the impact of length of cancer history, prevalence of heavy drinking was similar regardless of the length of cancer history (5.6%, 4.8% and 5.2% for 2–4, 5–9 and 10+ years, P=0.683, Figure 1C). 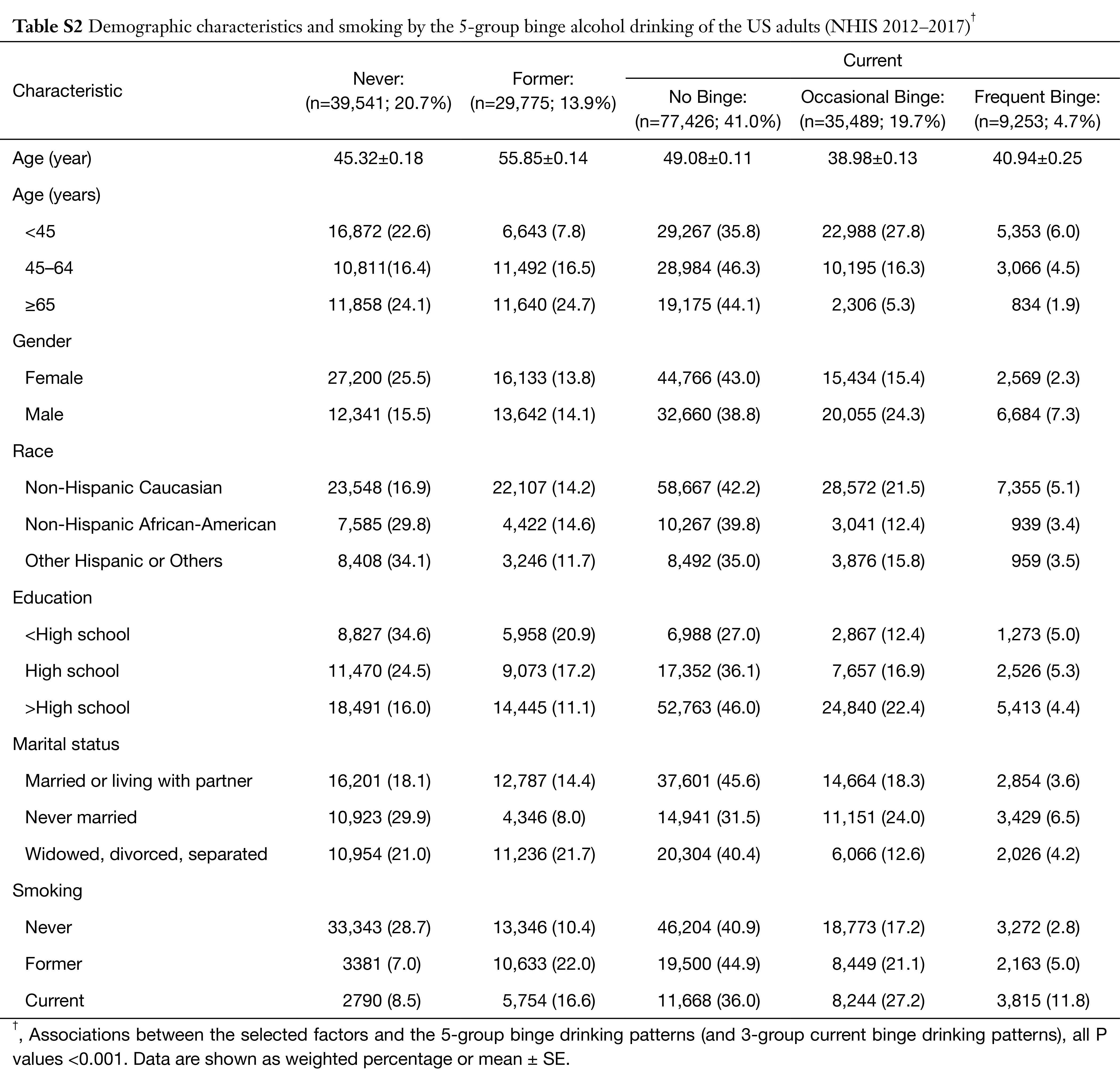 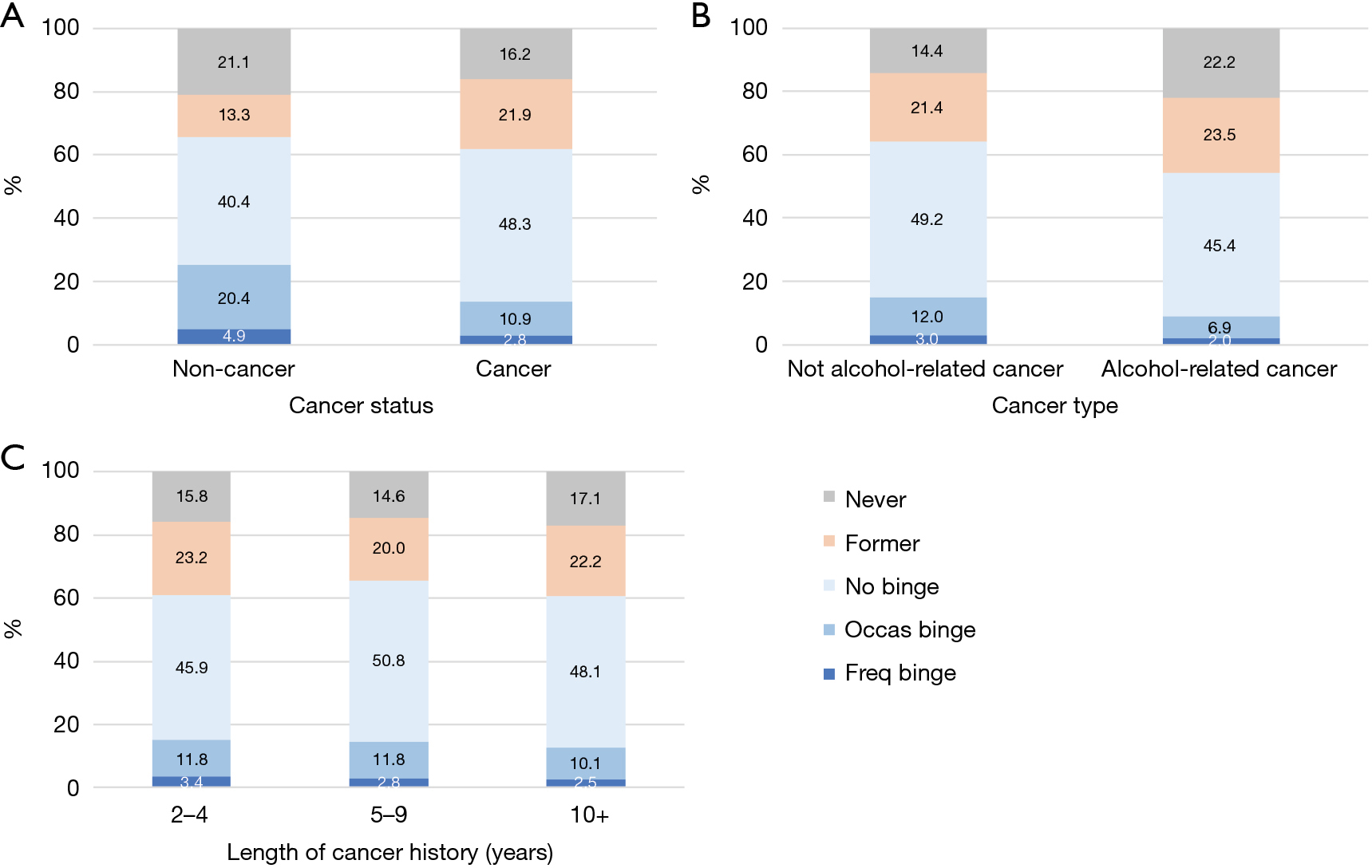 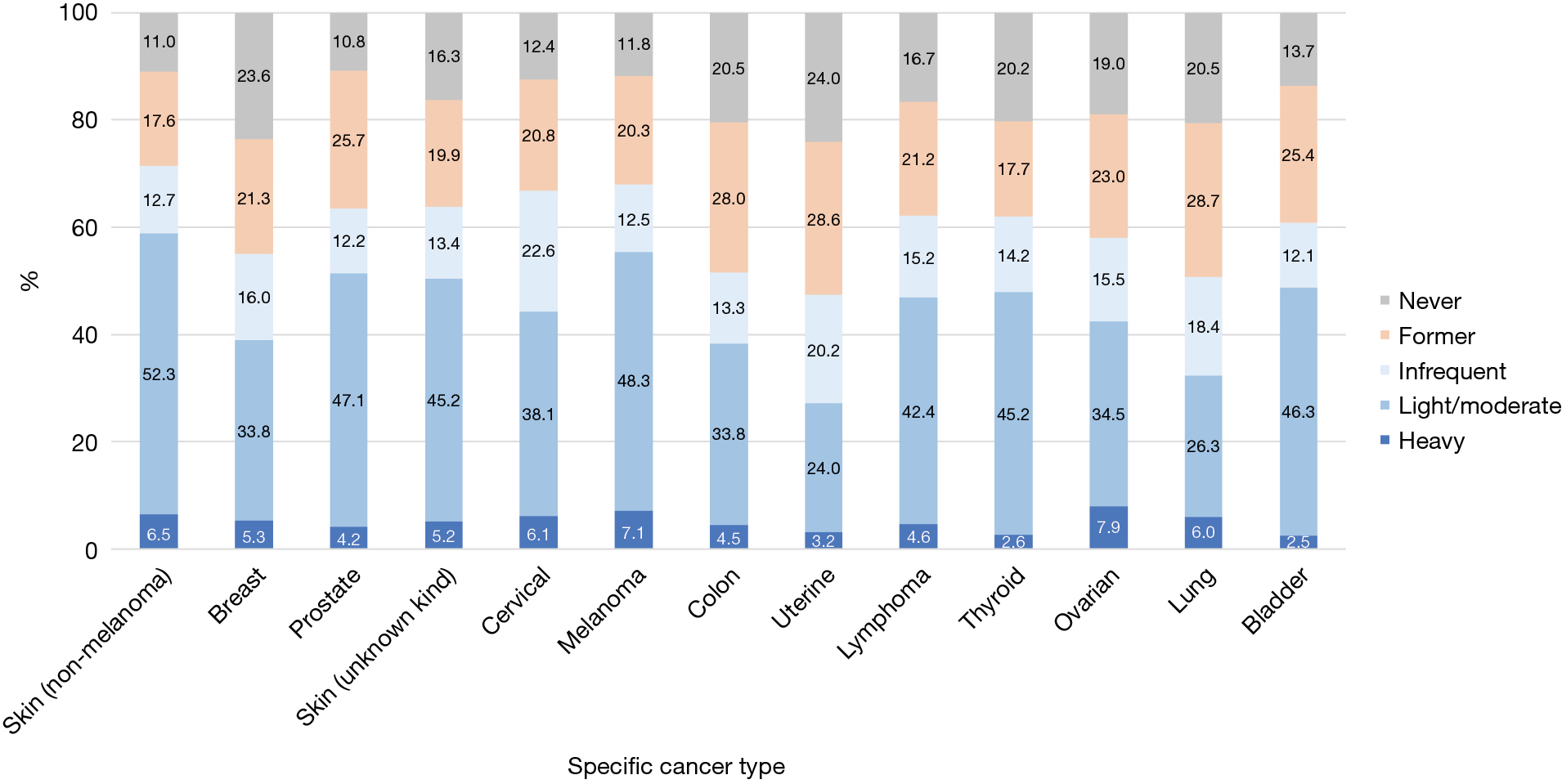 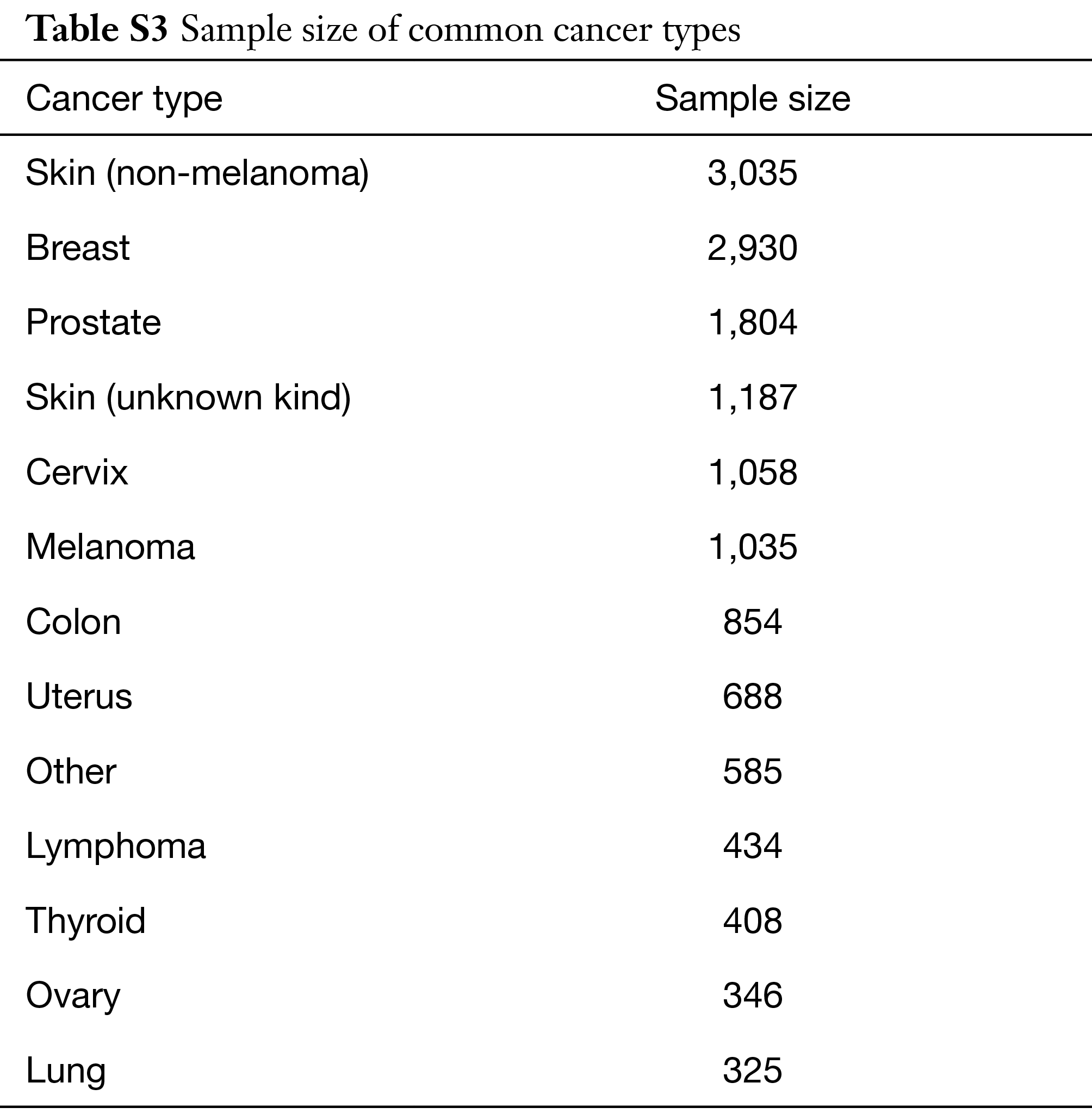 Our estimates of past-year alcohol drinking prevalence for non-cancer individuals was similar to other studies or reports. According to our study for non-cancer individuals, the past-year prevalence of current drinking was 65.9%, which is similar to the estimate of 70.1% based on the 2015 National Survey on Drug Use and Health (18). We estimated that prevalence of overall binge (occasional + frequent binge) was for 24.4% for the non-cancer individuals, which is similar to 25.2% based on the National Center for Health Statistics in 2018 (19). For these alcohol use patterns, our study used the ‘past-year’ as the reference timeframe. Comparing with the short-term timeframe (such as past 30 days), the past-year alcohol measure can capture an overall alcohol consumption habit and is especially beneficial for the irregular and infrequent alcohol drinkers (20). It also shown that the past-year alcohol measures provide better prediction on negative drinking consequences and potential alcohol abuse compared with the 2-week alcohol intake (21). Thus, the long-term past-year prevalence for non-cancer individuals, overall cancers and common cancer types (such as breast, colon and prostate cancer) can provide valuable information for physicians and public health policy makers.

Our study showed that prevalence of current drinking, light/moderate drinking, occasional binge and frequent binge was lower in cancer survivors than non-cancer individuals but no difference was observed for heavy drinking. After adjusting for the selected demographic factors and smoking status, cancer diagnosis only had a significant impact on the intermediate alcohol use (light/moderate drinking or occasional binge). Our study shows that smoking and selected demographic factors have a significant impact on alcohol drinking patterns. This is because the distributions of these selected demographic factors and smoking status are different for those with and without cancer. It is necessary to adjust these factors in order to test the real impact of cancer on alcohol intake. There is no direct comparison between our findings and previous studies due to different classification of alcohol use patterns. One similar study based on the NHIS 1998–2001 data found cancer status (yes/no) did not have a significant impact on the combined group of moderate/heavy alcohol intake after adjusting for the demographic and general health status (9).

We thank our anonymous reviewers for their valuable comments, which have led to many improvements to this article.

Ethical Statement: The authors are accountable for all aspects of the work in ensuring that questions related to the accuracy or integrity of any part of the work are appropriately investigated and resolved. NHIS was approved by the Research Ethics Review Board of the National Center for Health Statistics and the U.S. Office of Management and Budget. Oral consent was provided for all NHIS respondents.