Many prognostic factors for head and neck cancers are still emerging with new techniques (1). Most of these studies emphasize on the tumor tissue, and are directed towards identifying biomarkers for cancer cells or changes in the microenvironment surrounding the cancer cells in primary tumor tissue. However, there is a limit to reducing recurrence by studying only the tumor characteristics, and the role of immune system is important not only in the microenvironment but also in systematic conditions. The immunoediting theory can appropriately explain the balance between the immune system and cancer invasiveness (2). According to this theory, we previously evaluated the tumor-free lymph node in a neck dissection specimen retrospectively to find the prognostic markers, and the decreased cluster of differentiation 40 ligand (CD40L) expression indicated significant correlation with high recurrence rate (3). In accordance with the previous study, we tried to assess the differences in the systemic immune system via prospective evaluation of peripheral blood and tumor-free lymph node between the malignant and benign cancer patients and also by considering the disease progression or recurrence.

Tumor-free lymph nodes and peripheral blood were collected during surgery, prospectively, from October 2016 to August 2017. This prospective study protocol was approved by the Institutional Review Board of Seoul National University Bundang Hospital (B-1512-328-305). The patients who decided to enroll gave their informed consent. Patients who underwent surgery for head and neck malignancy including neck dissection, elective or therapeutic, without previous treatment history, were included in the malignant group. The tumor-free lymph node was harvested at the farthest level from the primary disease. In the benign group, the patients who underwent surgery for parotid or submandibular gland tumor were enrolled, and during surgery, the nearest lymph node that could be harvested by minimal dissection without further skin incision was selected. Patients who were diagnosed as malignant postoperatively, were excluded. In total, 5–10 cc of peripheral blood was collected from the forearm after inducing general anesthesia. Age, sex, stage, p16 expression, extracapsular spread, and recurrence were included as independent variables. 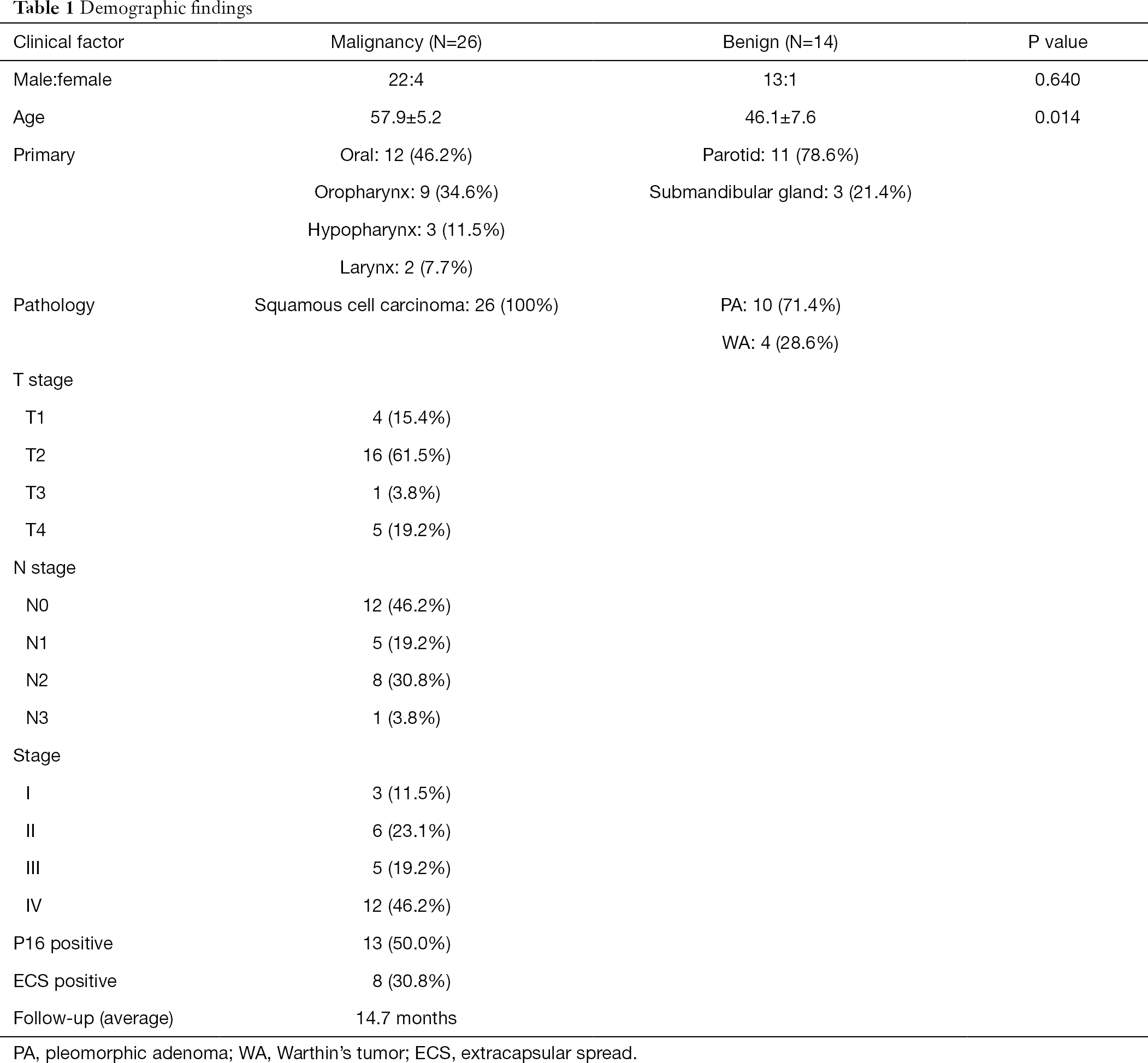 Figure 1 presents the flow cytometric dot plotting of peripheral blood and lymph node. The proportion of upper left and lower right quadrant was used as a value of each positively stained cell. As the patients in the malignant group were significantly elder than those in the benign group, correlation between the proportion of immune cell and age was evaluated using bivariate Pearson’s correlation, and CD8 in blood and lymph node exhibited significant correlation with age (Pearson’s correlation coefficient was –0.450 with P value 0.005 for blood and –0.439 with P value 0.028 for lymph node, respectively, Figure 2). 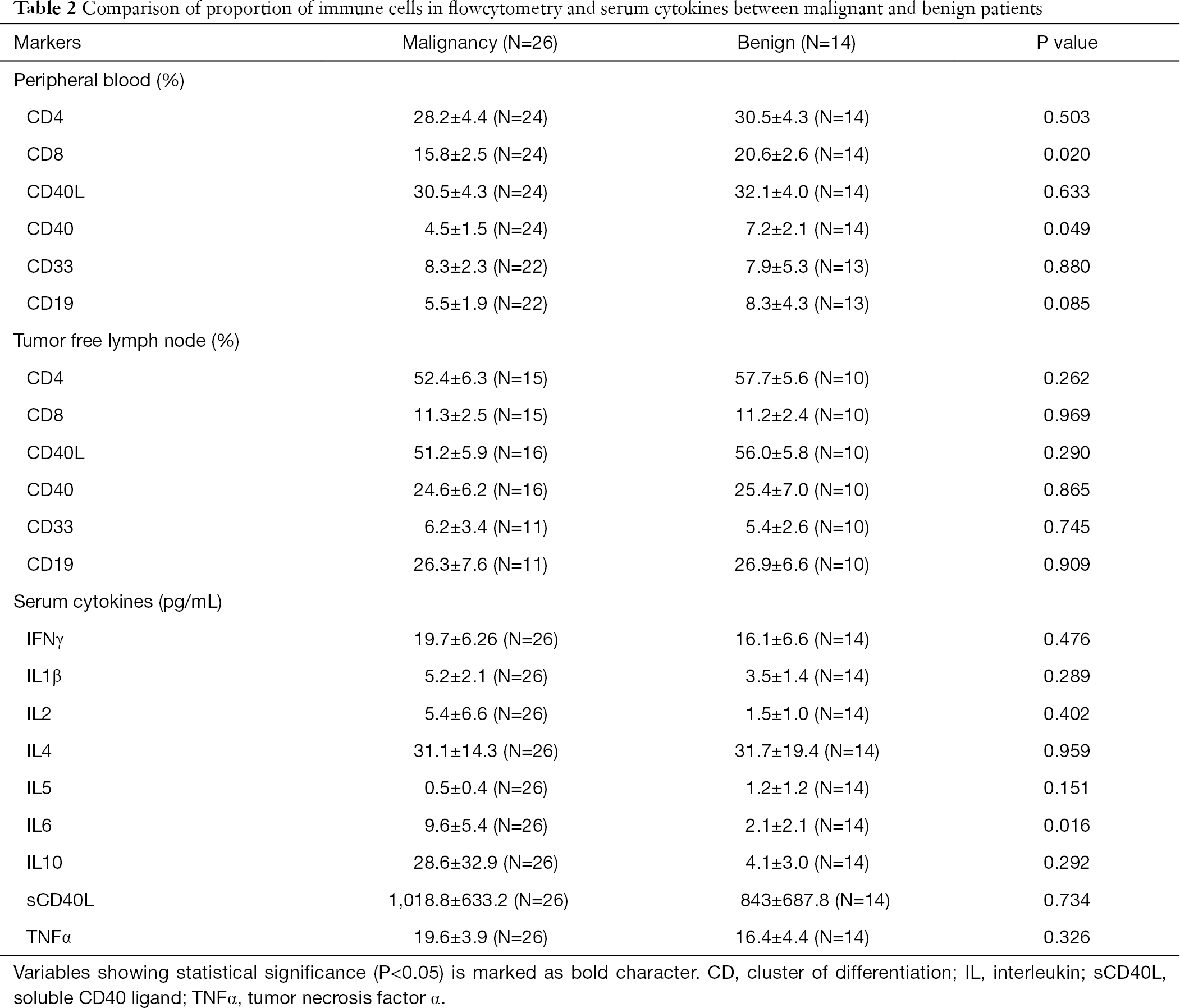 During the follow-up period, eight cases of recurrence were observed in the malignant group. Distant metastasis to lung or bone in four cases, regional recurrence in three cases, and one primary recurrence in laryngeal cancer was observed. The proportions of CD markers did not show any difference or tendency according to the recurrence or not. Among the serum cytokine levels, IFNγ exhibited a tendency to have a higher value in the recurrence group (30.4 vs. 14.1 pg/mL, P=0.085) although the P-value was not significant (Table 4). Receiver operating characteristic (ROC) curve of IFNγ with state value as recurrence exhibited the highest sensitivity and specificity in the cut-off value of 16 pg/mL. Kaplan-Meier survival analysis using this cut-off value revealed significantly higher recurrence rate in the patients’ group with IFNγ level more than 16 pg/mL in serum (Figure 3A). ANOVA analysis between no recurrence, loco-regional recurrence, and distant metastasis indicated significantly higher level of IFNγ in the patients who developed distant metastasis (Figure 3B).

This study aimed to investigate whether there is differential expression of immune markers in the peripheral blood or tumor-free lymph node in malignant patients and also to find the difference in cancer patients having adverse feature and the predictive factors for future disease progression or recurrence. Using flow cytometric evaluation of the blood and tumor-free lymph node, the key markers for the immune system were evaluated. The markers tested were CD4 and CD8a for T cells, CD19 for B cells, and CD33 for macrophages or monocytes. However, the panel of flow cytometry was very limited, and the markers are not specific for one kind of cell. Therefore, defining the immune cells by only one marker may be difficult and we will cite them as marker positive cell rather than T or B cell. In addition, following our previous study, which suggested CD40L as an important prognostic marker, CD40 and CD40L are included in this analysis (3).

On comparing the malignant and benign groups, it was observed that the proportion of cells expressing CD8 and CD40 in the peripheral blood was significantly lower in the malignant group (15.8% vs. 20.6% in CD8 and 4.5% vs. 7.2% in CD40). In addition, the level of IL6 in the peripheral blood serum was significantly higher in the malignant group. The role of CD4 and CD8 T cells in controlling cancer growth was extensively evaluated by several studies. Before a malignant tumor is established, aberrant activation of oncogenes induces cellular senescence and these senescent cells are cleared with CD4 T cells and macrophages. If the genetic alteration overloads the senescence, CD8 T cell becomes more important for controlling the tumor growth (4). CD40 is known to be expressed mainly in the B cells and CD40L expressed in activated CD4 T helper cell is crucial in T cell-dependent humoral immune responses (5). In addition, a recent article reported that CD40 is expressed not only in the antigen-presenting cells but also in CD8 T cells, so that CD8 T cells could directly interact with the CD4 cells (6). Therefore, the decreased proportion of CD8 and CD40 positive cells in the peripheral blood could be an important issue in the malignant patients. Nevertheless, the proportion of CD8 in blood and lymph node revealed statistically significant negative correlation with age. Considering this negative correlation of CD8, decreased CD40 in the peripheral blood could be an essential marker in the malignant patients. IL6 is also crucial in cancer growth and can promote cancer survival and proliferation by suppressing T cell activity, and negative correlation of survival in cancer patients with elevated serum IL6 levels is reported (7). Elevated IL6 is known to constitutively activate janus kinase (JAK)/signal transducer and activator of transcription 3 (STAT 3) signaling and novel inhibitors for IL-6/JAK/STAT3 pathway are currently in development (8). However, we compared the squamous cell carcinoma with salivary gland benign tumor instead of normal patients because obtaining lymph node from normal subject is impossible, and it can be a confounding factor.

The markers correlating with disease progression or prognosis are different from those found by comparing the malignant and benign patients. The patients with advanced stage (stage III or IV) and with extracapsular spread in metastatic lymph node exhibited significantly lower proportion of CD33 in tumor-free lymph node compared with the early stage (I or II) or patients with no lymph node metastasis. CD33 mainly expressed in macrophages or monocyte and is studied mainly in acute myeloid leukemia as the main treatment target (9). However, in our unpublished experiment using Balb/C mouse, macrophage or monocytes in the lymph node was decreased during the process of cancer cell elimination, and this decrease was delayed in the immunocompromised mice (unpublished data).

Prediction of recurrence indicated correlation with another marker and patients with increased serum IFNγ level revealed higher recurrence rate, in particularly, correlating with the distant metastasis. As the number of patients with recurrence is small, and the variations of IFNγ level are widely distributed with some outlier especially in distant metastasis, this finding may require verification with larger number of patients in future study. IFNγ is known to promote immune responses and prevents tumor development (10). A recent study reported the role of IFNγ in cytotoxic T cell-dependent cancer immunoediting (11). Therefore, explanation of the reason why CD33 in tumor-free lymph node is low in advanced disease or why IFNγ in serum is so high in patients with distant metastasis later on is not easy. Therefore, this reaction is assumed to be the difference that occurs because the immune system is more active due to large tumor burden. As increased tumor burden could result in a larger amount of microscopic remnant after surgery and cancer cells have higher chance to escape the host immunity (12).

With investigation of blood and tumor-free lymph node, we tried to find the immunologic prognostic markers. Most significant markers, CD8, CD40, IL-6 and IFNγ, could be found in peripheral blood and only CD33 in tumor-free lymph node showed some correlation with staging. Lymph node is specialized organ that provides a microenvironment for meeting of migratory immune cells and evokes the defense system. In our animal study about cancer elimination, we found that changes in lymph nodes occur first and similar changes occur later in the blood (unpublished data). Therefore, in already established cancer patients, meaningful changes in lymph node can be difficult to find.

Despite many limitations in this study, the important point is that the selected markers vary depending on what we compared. For example, comparison with benign tumor makes CD40 look like important prognostic factor but analysis based on recurrence of disease pointed IFNγ level as prognostic factor. For the future translational research, this can have important issue. Just targeting the factors showing difference between malignancy and surrounding normal tissue as frequently performed research may not improve prognosis.

This study is based on few cases and it is difficult to derive a clinically significant conclusion for each marker; however, an important fact is that markers exhibiting clinical significance differ from each other based on the comparison between benign and malignant groups, between advanced and early cancer, and between recurrence and nonrecurrence. Another important aspect of our results is that although several studies emphasize on the cancer tissue itself to identify prognostic markers or therapeutic targets, the host immunity should be considered along with cancer invasiveness to obtain a complete picture on prognosis.

Funding: This work was supported by the Basic Science Research Program through the National Research Foundation of Korea (NRF) funded by the Ministry of Education, Science, and Technology (Grant No. NRF-2015R1D1A1A01060660).

Ethical Statement: The authors are accountable for all aspects of the work in ensuring that questions related to the accuracy or integrity of any part of the work are appropriately investigated and resolved. This prospective study protocol was approved by the Institutional Review Board of Seoul National University Bundang Hospital (B-1512-328-305). The patients who decided to enroll gave their informed consent.