Primary angiosarcoma of the small intestine metastatic to peritoneum with intestinal perforation: a case report and review of the literature

Angiosarcoma is a malignant tumor that derives from the vascular or lymphatic endothelium. It is rare, comprising 1–2% of all soft-tissue tumors, and primary angiosarcoma of the small intestine is even rarer (1). The most common clinical manifestations of this disease, although non-specific, include gastrointestinal (GI) bleeding and abdominal pain (2,3). Endoscopic studies of GI angiosarcoma indicate that the tumor is highly vascular (4). Histologically, it contains numerous interconnecting vascular channels of endothelial origin (5).

Therefore, due to lack of specific symptoms, primary angiosarcoma of the small intestine is often discovered late and patients have a poor outcome. In addition, it has been anecdotally reported to spread to other sites including the peritoneum and liver (6,7). Herein, we report on a case of this type of tumor presenting with intestinal perforation and metastasis to the peritoneum in a 43-year-old woman, who died of GI bleeding three months post-surgery. Additionally, we present a pertinent literature review of the cases of primary intestinal angiosarcoma.

Written informed consent was obtained from the patient for publication of the case report and any accompanying images.

A 43-year-old woman was admitted to our hospital on September 18, 2016 with a two-day history of worsening abdominal pain located in the right lower quadrant of the abdomen. The pain started one month before with no apparent trigger. Other presenting symptoms included fatigue, weight loss, and abdominal distension. She denied vomiting, melena, rectal bleeding, or hematuria. The patient did not consume alcohol and had no history of toxic exposure or radiation therapy.

Physical examination at admission revealed an anemic appearance and a soft abdomen with mild tenderness and rebound pain in the right lower quadrant. Laboratory analysis revealed a red blood cell count of 2.37×1012/L (normal reference values: 3.8–5.1×1012/L) and a hemoglobin level of 58 g/L (normal reference values in women: 115–150 g/L). The white blood cell count was normal as well as the levels of the tumor markers carcinoembryonic antigen, CA125, and CA19-9. Human immunodeficiency virus test was negative. A contrast-enhanced computed tomography scan of the abdomen showed free intraperitoneal gas (Figure 1A) and the presence of a gas-liquid mixed density mass localized between the small intestine and sigmoid colon (Figure 1B). No intraluminal mass was found. The patient refused surgery and conservative treatment (consisting of cefmenoxime, 2.0, ivdrip, q12h) was then implemented. An abdominocentesis was performed, showing bloody fluid, and the exfoliative cytology test of the peritoneal fluid further revealed atypical tumor cells (Figure 1C).

Figure 1 Contrast-enhanced computed tomography scan of the abdomen of a 43-year-old woman with a two-day history of worsening abdominal pain, showing (A) free intraperitoneal gas (arrow), and (B) a gas-liquid mixed density mass localized between the small intestine and sigmoid colon (arrow head). No solid intraluminal mass is present. (C) Exfoliative cytology of the peritoneal fluid obtained via abdominocentesis revealing atypical tumor cells.

The conservative treatment failed to improve the symptoms as the abdominal pain persisted. An exploratory laparotomy was then performed on September 30, 2016 due to intraperitoneal hemorrhage, although no blood vessels had been injured during abdominocentesis and the bloody peritoneal fluid was not coagulated. Massive bloody ascites were observed, and the mesoileum showed multiple punctate or focal hyperemic lesions (Figure 2A). Additionally, a red mass invading the sigmoid colon was found in the wall of the small intestine at 10 cm distal to the ileocecum (Figure 2B,C). After separation of the small intestine from the sigmoid colon, an intestinal perforation (1 cm in diameter) was visible; hyperemic lesions were also noted in the mesosigmoid (Figure 2C). An intraoperative colonoscopy confirmed a hyperemic mucosal protrusion in the sigmoid colon at 25 cm from the anal verge (Figure 2D). Further, multiple sesame seed-sized nodules were palpated in the pelvic peritoneum, suggestive of a metastatic tumor.

Therefore, a palliative intestinal resection and enteroenterostomy were performed. The respective pathological examination revealed a fusiform, highly vascularized, and poorly differentiated tumor with cells arranged in disorder, invading the serosa and muscular layer (Figure 3A). Malignant tumor cells were also detected in the resected nodules (Figure 3A). Immunohistochemistry showed that the tumor tissue was strongly positive for CD31 and CD34 (Figure 3B,3C). These findings confirmed the diagnosis of small intestinal angiosarcoma.

The patient had an uneventful postoperative recovery, but declined adjuvant chemotherapy because of financial concerns. Three months after surgery, she died from tumor-associated GI bleeding.

For the literature review, we searched PubMed for case reports published in English using the search terms “primary angiosarcoma and small intestine” and 12 case reports were found. We excluded 5 case reports on secondary angiosarcoma of the small intestine. Overall, we reviewed 8 cases of primary angiosarcoma of the small intestine including our own case (Table 1). These case studies included 5 males and 3 females aged 25–85 years. Four (4/8) patients presented with abdominal pain and 4 patients had GI bleeding (9-12). In 2 cases, including ours, intestinal perforation was the putative cause of acute abdomen (6). In addition, metastases to extra-intestinal sites occurred in 5 cases including our own case. Noticeably, 4 of the 5 cases showed metastases to the peritoneum, demonstrating the invasive nature and metastatic potential of the disease. In one patient, the angiosarcoma that spread to the peritoneum also spread to the liver, among other sites (6); in another patient, the tumor metastasized to multiple organs including the brain (12). 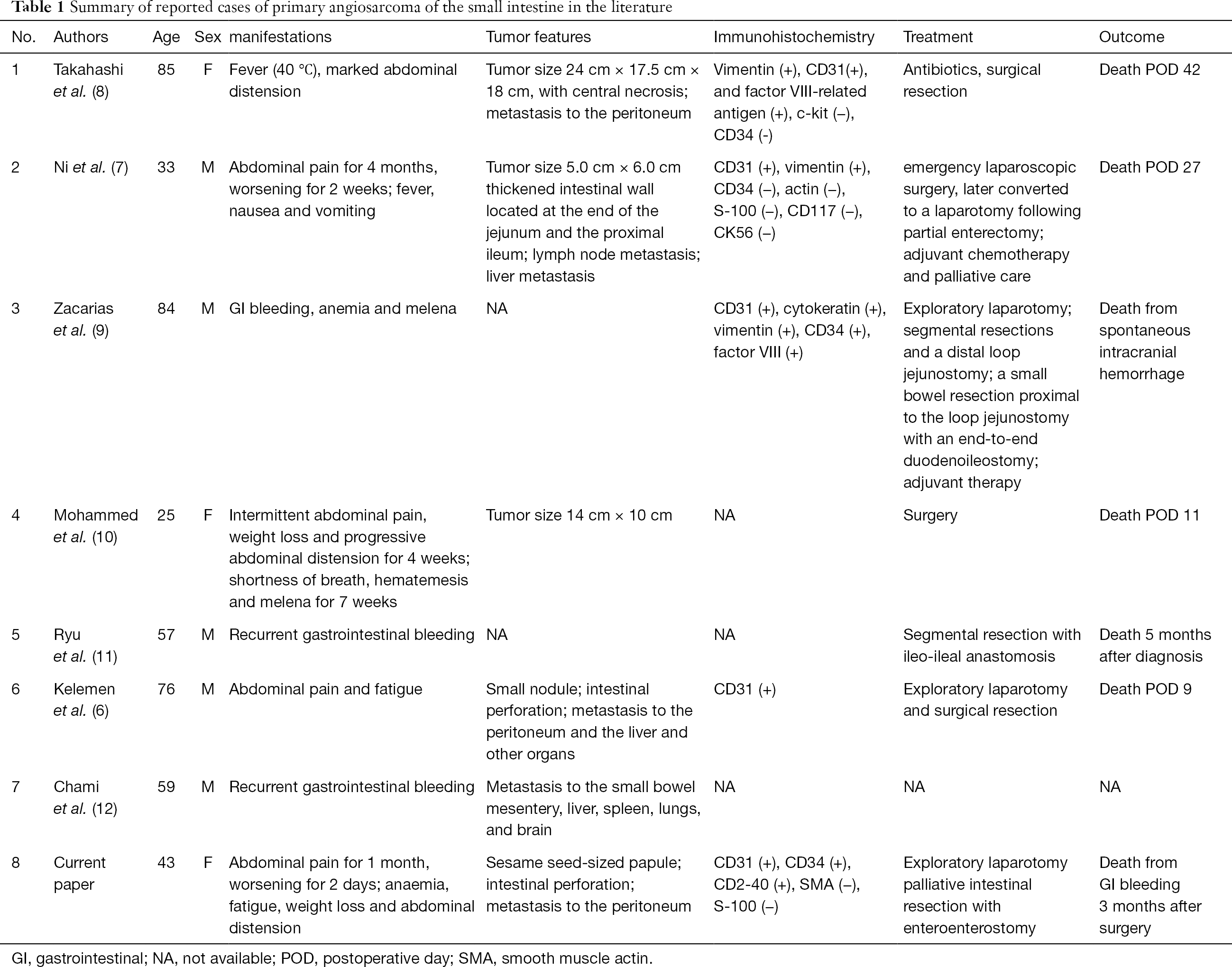 In the present study, we describe a case of primary angiosarcoma of the small intestine in a 43-year-old woman with acute abdomen due to intestinal perforation, also presenting with metastasis to the peritoneum. Primary angiosarcoma of the small intestine is rarely reported (1), and our case is characterized by invasive growth and metastatic behavior.

Imaging studies are of limited utility in diagnosing primary intestinal angiosarcomas due to the lack of specificity. Endoscopy could be used for direct tumor detection, as it is of value in identifying tumors of the stomach, duodenum, or colon. However, exploratory laparotomy is often required to establish a definite diagnosis of primary intestinal angiosarcoma. Similarly, capsule endoscopy and barium studies have limited diagnostic use in this type of tumor, although they are useful for detecting tumors of the jejunum and ileum (13,14). Hence, here, we undertook surgical exploration because of the intestinal perforation, intraperitoneal hemorrhage, and failure of conservative treatment.

Angiosarcoma is a very complex and heterogeneous tumor, and the molecular mechanisms of its genesis remain largely unknown. In this study, we did not analyze gene mutations. Genomic studies have identified several gene mutations that might be associated with angiosarcoma including those in KRAS, HRAS, NRAS, BRAF, MAPK1, and NF1, but no definite relationship was established (15). Behjati et al. found recurrent mutations in PTPRB and PLCG1 (16), however, these are infrequent and thus, can only partially explain the angiosarcoma genesis. For these reasons, histologic examinations combined with immunohistochemical analysis are always required to confirm the diagnosis, excluding other tumors.

Microscopically, angiosarcomas characteristically present two types of growth pattern, vasoformative and solid. The vasoformative structures are lined by spindled or swollen anaplastic endothelial cells, while the solid growth pattern consists of sheets of spindle-shaped cells or large, polygonal epithelioid-shaped cells with abundant amphophilic or eosinophilic cytoplasm (17). However, in many cases, these cells might have only epithelioid histology and can be difficult to differentiate from a benign proliferation, inflammatory lesion (1), or other epithelioid tumors (1,17). Fortunately, angiosarcomas typically express endothelial markers, including the von Willebrand factor, U. europaeus agglutinin 1, CD34, and CD31; about 80% of angiosarcomas express simultaneously D2-40 and CD3l (8). Of those, the von Willebrand factor, U. europaeus agglutinin 1, and CD31 are the most useful markers in poorly differentiated tumors, although dedifferentiation could result in their loss (18). Intestinal angiosarcomas without epithelial markers typically express CD31 and CD34 (19). In line with this, in our case, the tumor showed strong positivity for CD34 and CD31, which contributed to confirm the final diagnosis of angiosarcoma.

Currently, the main treatment methods include surgery, radiotherapy, chemotherapy, and biological targeted therapy. For local angiosarcoma, radical surgery with complete resection (R0) is the first choice of treatment and no convincing evidence supports the use of chemotherapy after definitive surgery (20-22). However, given the risk of metastasis, adjuvant chemotherapy is recommended in those patients. Some potential anti-angiogenic drugs, such as sorafenib, sunitinib, and bevacizumab have been used in angiosarcoma treatment (23-26). In contrast, biological agents are not advised for treatment outside of clinical trials due to insufficient supporting evidence.

Patients with primary intestinal angiosarcoma have a poor prognosis despite the best therapeutic regimens available. The majority of these patients die within few months of diagnosis, including in the postoperative period. Fraiman et al. suggested that the prognosis of small intestinal angiosarcoma is significantly worse than that of angiosarcoma of any other site (27). In agreement, our literature review showed that patients with angiosarcoma of the small intestine typically die as early as 11 days until 5 months post-surgery; 29 cases indicated that nearly half of the patients (14/29) died within 1 year after initial diagnosis or surgery, and only 6 (6/29) survived more than 1 year (7). These findings suggest that patients with angiosarcoma of the small intestine have an extremely poor prognosis. In fact, the 5-year relative survival rate is 50–60% and 21–35% for primary soft-tissue sarcoma (28) and angiosarcoma patients (22,29), respectively. Patient’s poor performance status, multiple lesions, positive surgical margin, tumor size (>5 cm), mitotic count (>3 HPF), depth of invasion (>0.3 cm), and metastases contribute to an unfavorable outcome in patients with small intestine angiosarcoma (22,29).

In conclusion, primary angiosarcoma of the small intestine is a rare cause of acute abdomen and recurrent GI bleeding. Our findings, together with other reports, reveal that, despite volume-reducing palliative surgery, its prognosis remains poor.

We thank the American Journal Experts for English language editing.

Ethical Statement: The authors are accountable for all aspects of the work in ensuring that questions related to the accuracy or integrity of any part of the work are appropriately investigated and resolved. Ethical approval was given by the Medical Ethics Committee of the First Hospital of Jilin University. Written informed consent was obtained from the patient for publication of this manuscript and any accompanying images.