Hepatocellular carcinoma (HCC) represents the sixth most common malignancy and the second leading cause of cancer-related deaths worldwide (1). Currently, the therapeutic tools for HCC include surgery, radiofrequency ablation, chemotherapy, and targeted cancer therapy, with diversified treatment patterns. Meanwhile, orthotopic liver transplantation (OLT) still represents the best tool predicting long-term survival in the treatment of liver malignancy. Clinical prognosis and therapeutic options in HCC after OLT widely depend on both tumor recurrence and hepatic function (2,3). Currently, tumor size, histological grade of differentiation, microvascular and macrovascular invasion, ischemia time, and some related genes are prognostic factors after OLT in patients with HCC (4-7). Factors impacting hepatocyte regeneration and proliferation, such as IL-6 (8) and TLR-4 (9), are associated with tacrolimus metabolism in early stage after transplantation, which may markedly influence patient prognosis after OLT (10). However, studies assessing the association of hepatic function grade standards with prognosis after OLT are scarce.

The Child-Pugh (C-P) grade is the most commonly used measure for the assessment of hepatic function and patient selection for OLT (11). Nevertheless, the use of interrelated and subjective variables, such as ascites and encephalopathy, limits the prognostic ability of this liver function indicator, particularly in patients with HCC. In 2015, Johnson proposed an objective measure to assess liver function, namely the albumin-bilirubin (ALBI) grade. This evidence-based model is solely based on serum bilirubin and albumin, which could help clinicians obtain a more objective scale that guides disease diagnosis and treatment (12). Since then, the ALBI grade has been shown to have better performance for assessing hepatic function in HCC patients compared with the C-P grade (13-16). Especially, the ALBI grade has been reported as a prognostic factor in independent studies involving tumor resection (13), stereotactic ablative radiation therapy (14), sorafenib therapy (15), and acute-on-chronic liver failure (16). However, it has been rarely assessed in HCC patients undergoing OLT. Hepatic function is one of the critical indicators in assessing the surgical risk before transplantation; furthermore, its restoration is the main process taking place after liver transplantation. Thus, we hypothesized that the ALBI grade may affect patient prognosis after OLT in HCC.

The primary aim of the present study was to assess the ALBI grade, as a practical and potentially effective clinical marker for determining prognosis after OLT in patients with HCC.

All HCC patients treated by OLT in the Shanghai General Hospital, Shanghai Jiao Tong University School of Medicine, between September 2007 and June 2012, were enrolled in this retrospective study. A total of 75 patients with HCC were included. Inclusion criteria for transplantation patients were: age ≥18 years; compatible blood and tissue type with respective donors; no macrovascular invasion or extrahepatic metastasis; and no history of other malignant tumors; no other grafts or organ dysfunction; complete follow-up records. All the patients were Han Chinese.

Venous blood samples were collected right before OLT. Alanine aminotransferase (ALT), aspartate transaminase (AST), total bilirubin, alkaline phosphatase, serum albumin, total protein, creatinine, and other biochemical indicators were assessed with specific ELISA kits, according to the manufacturer’s instructions. The C-P score was derived from five variables, including serum total bilirubin, albumin concentration, prothrombin time, ascites status, and the degree of encephalopathy. Based on the C-P score, the patients were classified into the following 3 groups: grade A (score ≤6); grade B (6< score ≤9); grade C (>9) (11). The ALBI score was calculated by the following formula: ALBI score =0.66×log10 [total bilirubin (µmol/L)] − 0.085× [albumin (g/L)]. According to the ALBI score, the patients are categorized into grade 1 (score ≤−2.60), grade 2 (−2.60< score ≤−1.39), and grade 3 (score >−1.39), respectively (12). The patients were followed up right after hospital discharge, every week within 3 months of OLT, and every month thereafter by telephone, email, or hospital visit. Follow-up occurred for at least 100 months or until patient death.

All statistical analyses were performed with SPSS v20.0 (SPSS, USA). Non-normally distributed continuous variables were compared by nonparametric tests, and presented as median and interquartile range. Categorical variables were expressed as absolute and relative frequencies, and compared by the chi-squared test. Survival analyses were performed using the log-rank test and Cox regression. Survival was described as mean and 95% confidence interval (CI). Multivariate logistic regression analyses were used to assess the factors associated with HCC recurrence. Two-sided P<0.05 was considered statistically significant.

Clinical characteristics of the enrolled patients 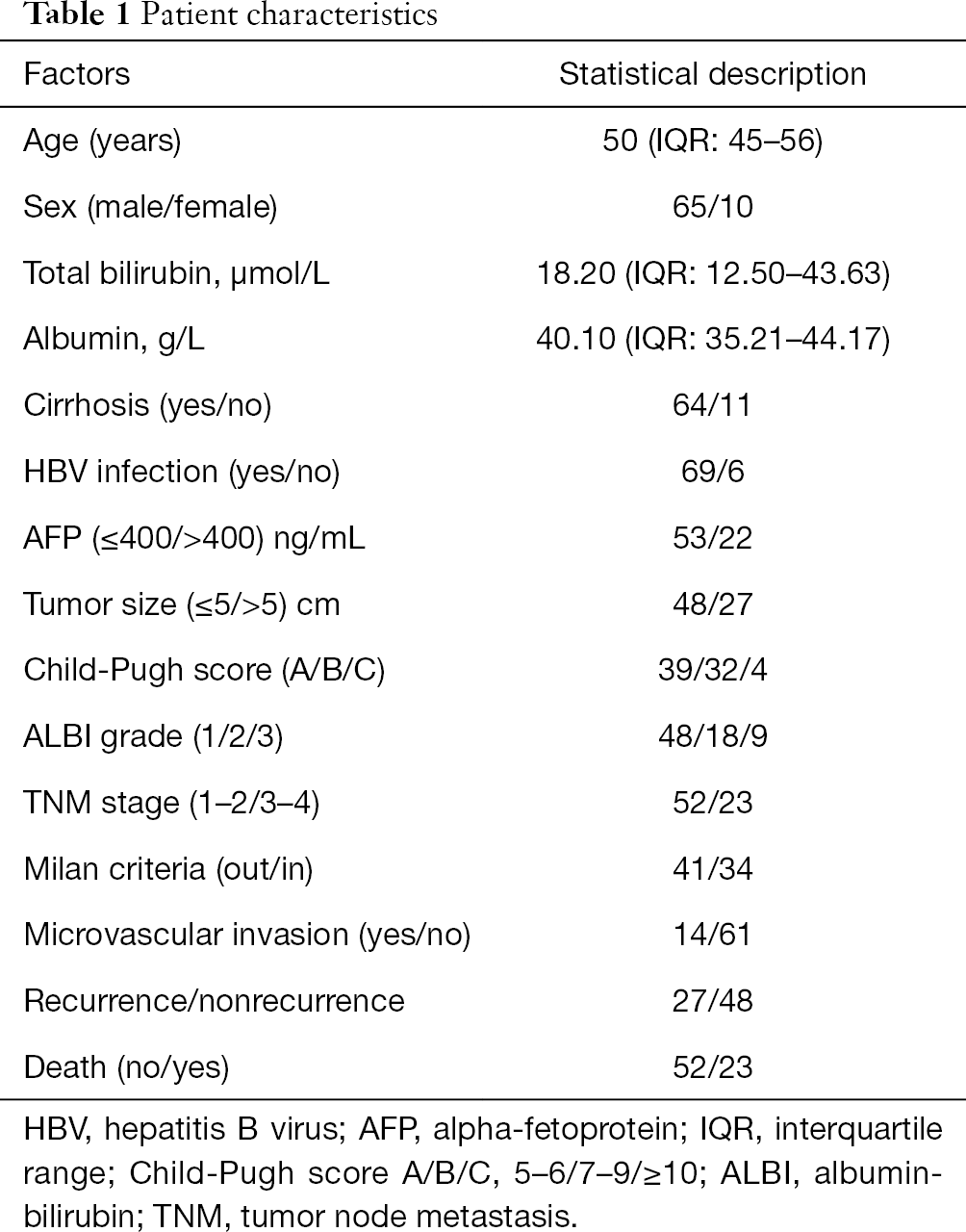 Next, factors with corresponding P<0.05 in the univariate analysis were introduced into Cox proportional hazard regression analysis to further assess risk factors for OLT, and ALBI grade (P=0.022 and P=0.019, respectively) persisted as a statistically significant independent prognostic factor of both OS and RFS. Meanwhile, TNM stage was an independent predictor of OS (P=0.039); microvascular invasion stage remained a prognostic factor of RFS (P=0.042) (Table 3). According to previous findings (13-16), ALBI grade (grade 1 vs. grades 2–3) were subjected to Kaplan-Meier test and Cox proportional hazard regression analysis. In agreement with the above findings, patients with ALBI grade 1 had a survival advantage over those with other grades (Figure 1); ALBI grade 1 remained significant in predicting post-operative OS and RFS in HCC patients who underwent OLT [HR =3.095 (1.290–7.426), P=0.011; HR =3.967 (1.640–9.597), P=0.002, respectively] (Table 4). 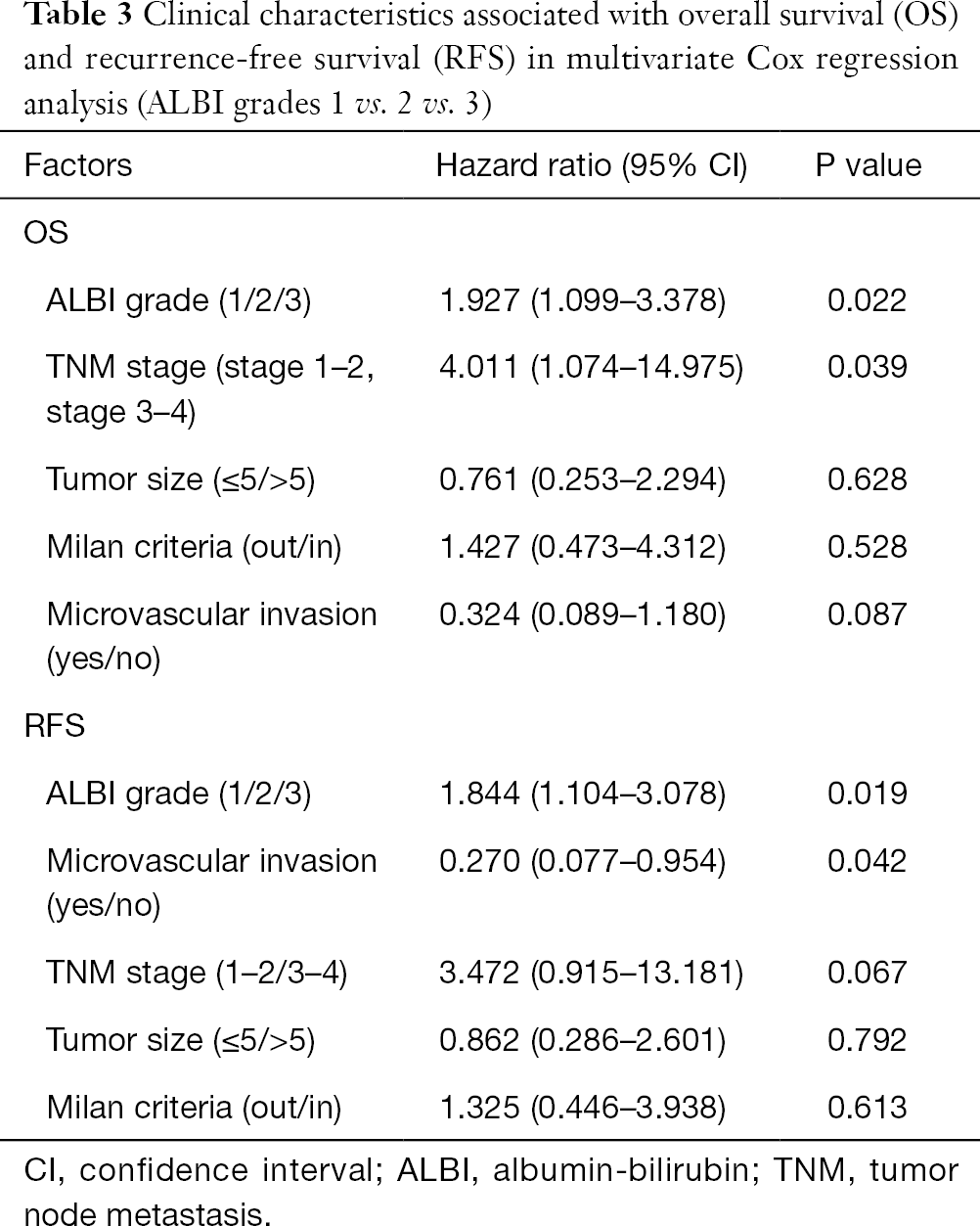 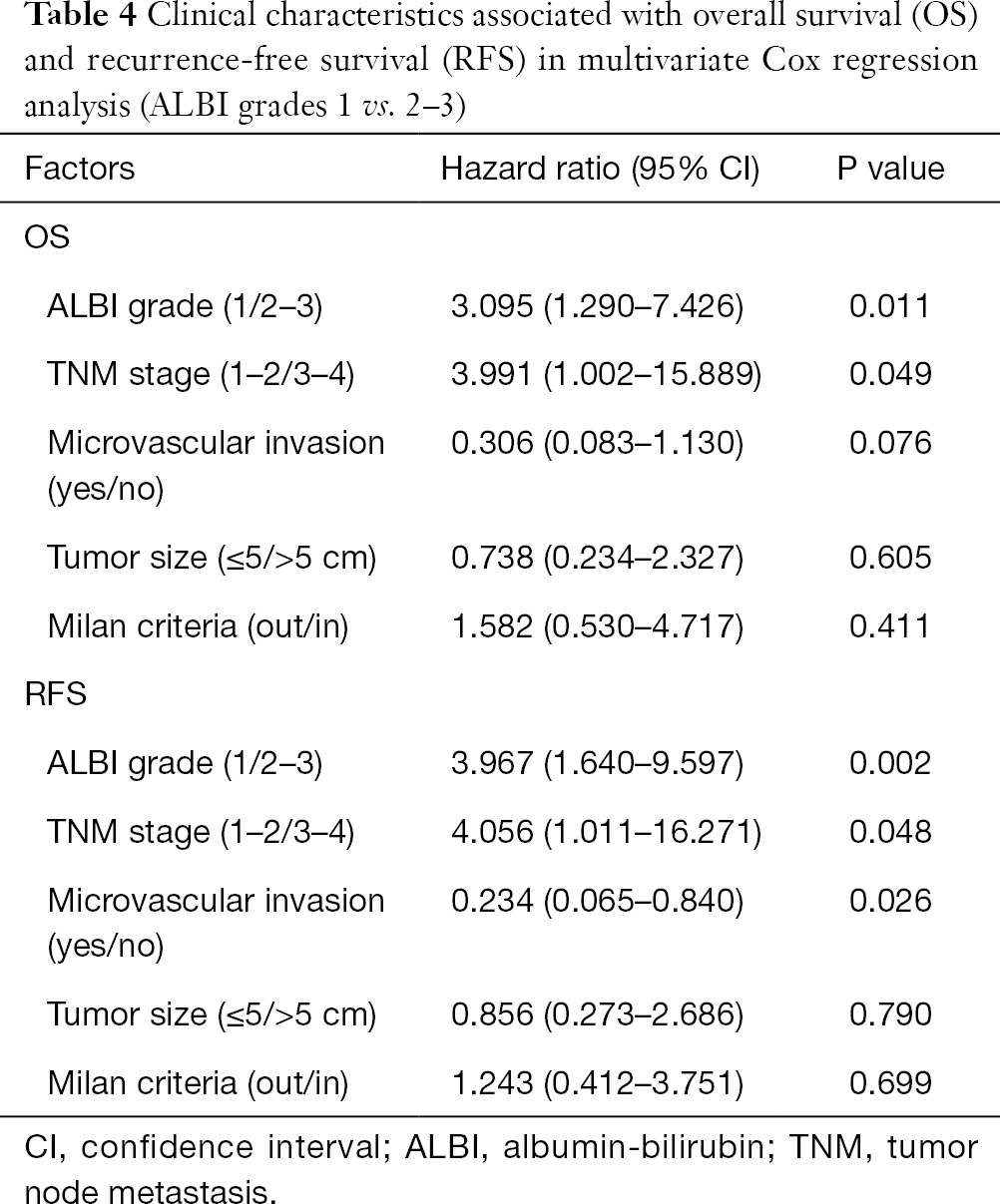 Figure 1 Kaplan-Meier survival curves for estimating (A) overall survival (OS) and (B) recurrence-free survival (RFS) in patients with various ALBI grades (1 vs. 2–3).

The prognostic value of the ALBI grade was further assessed for survival, especially RFS. Another test including the above eleven parameters revealed that tumor size (≤5 cm), low ALBI grade, TNM stage [1–2], inclusion by Milan criteria, and no microvascular invasion were found in patients with low probability of HCC recurrence after OLT, generally in agreement with previous studies (4-7). The clinical characteristics and their associations with HCC recurrence are presented in Table 5. To further elucidate the impact of ALBI grade on tumor recurrence, all the above parameters were subjected to multivariate logistic regression analysis. As shown in Table 5, ALBI grade (grade 1 vs. grades 2–3) and Milan criteria (out vs. in) were correlated with HCC recurrence [OR =6.842 (1.550–30.199), P=0.011; OR =0.084 (0.015–0.490), P=0.006, respectively] (Table 6). 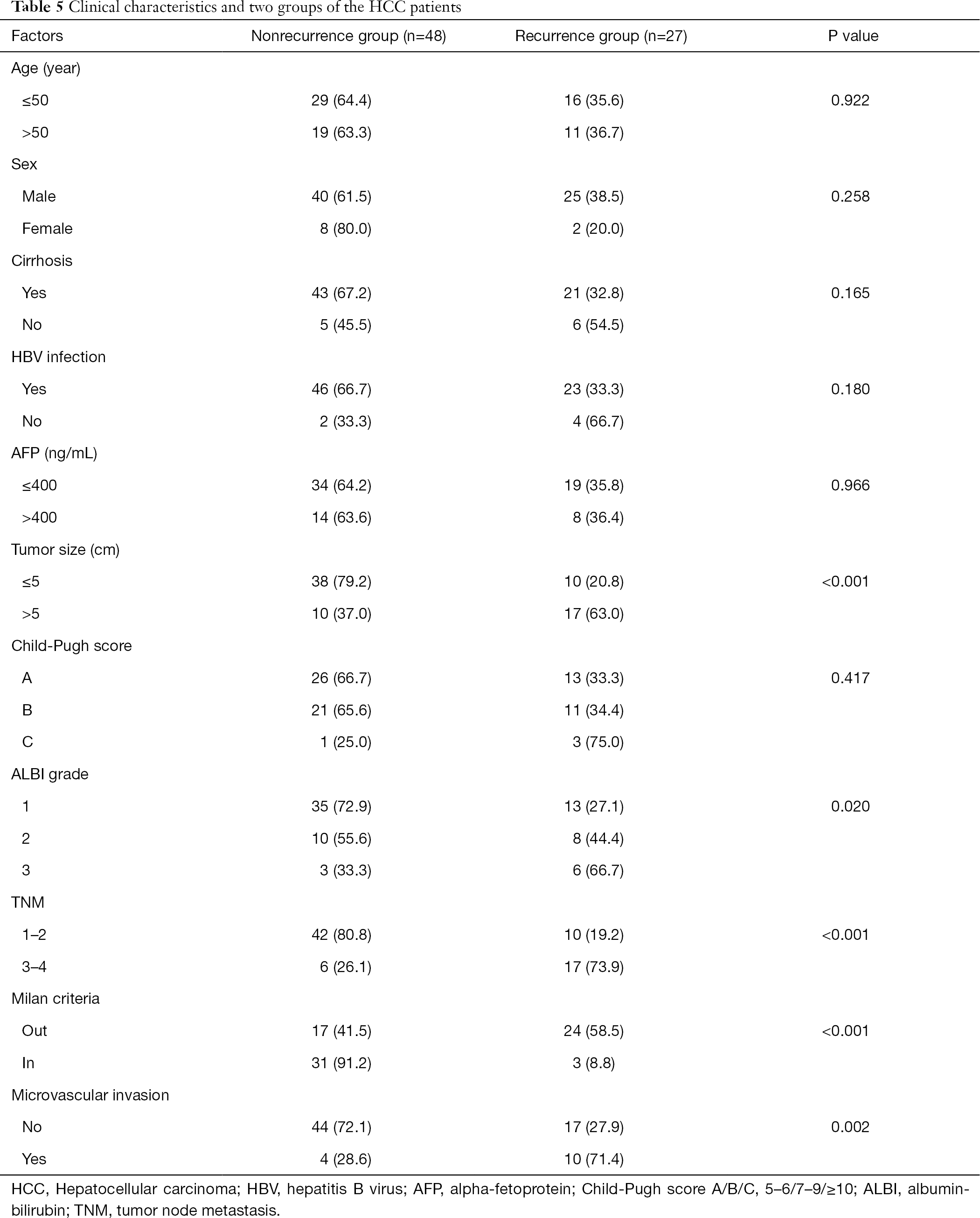 The patient’s systemic condition and residual liver function should be evaluated comprehensively before the operation, which could help patients with surgical and postoperative treatments. To date, several scoring systems have been proposed to evaluate liver function and predict the outcome of patients with liver disease; these include the Japan Integrated Stage score (17) and C-P (11) scales. However, unforeseeable complications remain after liver transplantation. How to improve patient prognosis is currently a major research hotspot. Recently, some clinical manifestations and gene mechanisms were shown to be related to post-transplantation prognosis and recurrence. Indeed, tumor size and number, histological grade of differentiation, microvascular and macrovascular invasion, ischemia time, SMO and the C6 genotype are associated with postoperative prognosis and recurrence after OLT (2-7,18). However, these factors require invasive or noninvasive assays, which are expensive and/or intolerable. The ALBI-grade, which is derived from only albumin and total-bilirubin measurements, compared with those mentioned above, is a more objective and effective scoring system. In the current study, we demonstrated the value of ALBI grade in predicting post-operative OS and RFS in HCC patients who underwent OLT.

Human serum albumin, synthesized predominantly in the liver as an abundant multifunctional non-glycosylated, negatively charged plasma protein, has an indispensable role in antioxidant functions and enzymatic activities, with ascribed ligand-binding and transport properties (19). Ischemia-reperfusion injury caused by hypoxia/reoxygenation in the liver is a major event during liver transplantation and failure, which inevitably causes liver damage and inflammatory reactions, promotes lipid peroxidation, and stimulates reactive oxygen species (ROS) production (20-22). Meanwhile, albumin was reported to protect against ischemia-reperfusion injury. Restoring the extracellular thiol status, scavenging neutrophil-derived ROS, modifying redox balance, regulating cell signaling, transporting antioxidative substances, and inhibiting TNF-α-induced upregulation of VCAM-1 and NF-KB activation were reported to help normal cells escape inflammation and oxidative stress related damage (23-28). According to Yamaguchi, heme oxygenase-1 gene and protein upregulation by ischemia-reperfusion of the liver may enhance the production of bilirubin, which acts as a scavenger via its own oxidation to sequester ROS, with a protective effect against oxidative stress (29). Although, studies of albumin and bilirubin in patients with liver disease have led to encouraging results, the potential role of effective albumin levels and physiological bilirubin amounts in inflammatory and oxidative stress damage remain unclear (30). As shown above, patients with ALBI grade (merely from albumin and bilirubin levels) 1 had a survival advantage over those of ALBI grades 2 and 3. The severity of early incidents during OLT is the most vital event for patient outcome (10). Thus, we hypothesized that initial albumin and bilirubin amounts might play an important role at this unique moment, and improved hepatic function could lead to better prognosis.

In the current study, we confirmed the value of the ALBI grade in predicting post-operative OS in HCC patients who underwent OLT. To date, Zou (13) and Wang (31) have reported that the ALBI grade is associated with post-operative outcomes in HCC patients after hepatectomy, with a better predictive value than the C-P grade; this was also confirmed in stereotactic ablative radiation therapy, sorafenib therapy, or acute-on-chronic liver failure (14-16). These findings were consistent with the present study. However, there was no means to verify that the ALBI grade was associated with HCC recurrence. In the current study cohort, 13 (27.1%), 8 (44.4%), and 6 (66.7%) patients with ALBI grades 1, 2, and 3, respectively, experienced HCC recurrence after OLT (P=0.020). Mean times to recurrence were 10.87 months (95% CI: 4.62–17.13), 9.03 months (95% CI: 1.85–16.20), and 5.76 months (95% CI: 1.31–11.48) for ALBI grades 1–3, respectively, indicating no significant differences (P=0.664). However, the ALBI grade clearly showed a tendency in estimating time to recurrence. In addition, 10 (20.8%) patients with ALBI grade 1, 9 (50.0%) with ALBI grade 2, and 4 (44.4%) with ALBI grade 3 died during follow up (P=0.048); patients with ALBI grade 1 had a better outcome than those with other grades. These findings suggested that a low ALBI grade does not delay HCC recurrence, but may decrease the incidence of HCC recurrence and help the patient against tumor cells, thereby leading to improved outcome. Moreover, preoperative albumin and bilirubin would play an important role in ischemia time, which has been demonstrated as a recurrence factor (3). Tumor recurrence is a major and potentially fatal challenge after OLT for HCC, with a fairly complicated underlying mechanism (32). Nonetheless, the patient’s basic hepatic function status, described by the ALBI grade, undisputedly has an irreplaceable value.

The limitations of this study should be mentioned. Firstly, the sample size was relatively small, and all subjects were Chinese Han enrolled from a single center. Secondly, the majority of patients were infected with HBV; therefore, regional differences in viral infection may affect the possible correlation between the ALBI grade and prognosis after OLT. Thirdly, the ALBI grade was not dynamically monitored; ALBI grade change during the perioperative period may produce different results. Fourthly, postoperative complications and effective related proteins were not currently included in the analysis. To validate these data, studies with larger patient cohorts in multiple centers and different regions are required. Besides, continuous monitoring of the ALBI grade is one of the main directions of future research.

Overall, in patients with HCC undergoing OLT, ALBI grade 1 results in higher OS, increased RFS and lower risk of recurrence. These novel findings indicate that the ALBI grade represents an independent marker of prognosis following OLT for HCC; improving the preoperative liver function status may improve the prognosis of patients with HCC after OLT.

We thank the native English speaking editors at MedSci (www.medsci.cn) for editing the manuscript.

Funding: This study was partly supported by the National Natural Science Foundation of China (No. 81370579) and the Science and Technology Commission of Shanghai Municipality, China (No. 134119a6300).

Ethical Statement: The authors are accountable for all aspects of the work in ensuring that questions related to the accuracy or integrity of any part of the work are appropriately investigated and resolved. This study was approved by the institutional review board of Shanghai General Hospital, Shanghai Jiao Tong University School of Medicine (No. 2013KY050). The procedures were performed based on strict guidelines from the ethics committee of the hospital, following the current regulations of the Chinese Government as well as the Declaration of Helsinki. Informed consent was waived because this study consisted of a retrospective review of existing records without any direct patient contact. The research ethics board considered this a minimal risk study.