Seriously threatening human public health, the incidence of hepatocellular carcinoma (HCC) has increased worldwide (1). Hepatectomy is regarded as the first-line curative treatment for HCC and has improved postoperative survival outcomes (2,3). However, the rates of postoperative recurrence and metastasis continue to be high (4,5). Appropriate approaches for treating hepatic inflow occlusion have generally been thought to be important and necessary to guarantee a smooth surgery (6).

Two methods, i.e., the Pringle maneuver and selective hemi-hepatic vascular exclusion (SHVE), have become routine during surgery for HCC. These techniques effectively reduce intraoperative blood loss. The Pringle maneuver prevents bleeding from the liver by clamping the hepatoduodenal ligament and has been used for more than 100 years (7). However, the Pringle maneuver is controversial because of the potential for severe ischemia-reperfusion (IR) injury, which usually causes reversible or irreversible liver and multiple organ dysfunction and other complications (8,9). By occluding the bleeding inflow from the hemi-hepatic tissue in which the tumor is situated, SHVE is useful, but IR injury is also unavoidable (10,11). To decrease blood loss and accelerate the postoperative recovery of patients, surgical approaches for hepatic inflow occlusion have been proposed but remain controversial, especially regarding the effects of these approaches on the prognosis of HCC patients (12-16). Therefore, further exploration of these surgical approaches is necessary and imperative.

In total, 343 patients undergoing R0 resection between March 2013 and June 2018 at our hospital were enrolled, and the follow-up deadline was October 1, 2018. The inclusion criteria were as follows: (I) R0 resection indicated that the macroscopic tumor was completely removed, the resection margin was negative, and no detectable intrahepatic and extrahepatic metastasis lesions remained; (II) the disease stages were distinguished according to the BCLC staging system; (III) a definitive pathological diagnosis of HCC was made based on the World Health Organization (WHO) criteria; (IV) no other treatment was performed before surgery; (V) the patient’s liver function was not beyond the Child-Pugh stage A, and the performance status test (PST) score was less than 1; (VI) the tumor differentiation grade was identified according to the Edmondson-Steiner criteria (18); (VII) finally, the criteria for microvascular invasion (MVI) were that the tumor thrombus was whole or partly covered by the endothelium and visible only under microscopy. The endothelium-covered tumor thrombi had to be located inside the tumor or close to the tumor edge and extend into the portal vein or hepatic vein branches to be considered MVI (19).

Hepatectomy (R0) and hepatic inflow occlusion were performed by surgeons with considerable clinical experience. The surgeons occluded the blood flow by blocking the portal blood flow (Pringle maneuver). A flexible tourniquet was used to clamp the whole hepatoduodenal ligament. A relaxed interval of 5 minutes was alternated with intermittent vascular interruption, which lasted less than 25 minutes each time. The right or left Glisson’s pedicle was blocked for SHVE.

Postoperative follow-up was performed every 1–2 months during the first year and every 3 months thereafter. The serum alpha-fetoprotein (AFP) levels were measured regularly, and imaging examinations, including ultrasonography and computed tomography (CT)/magnetic resonance imaging (MRI), were performed regularly. Recurrence was defined as meeting one of the following criteria: (I) AFP levels significantly increased along with one typical imaging finding, (II) two types of imaging showing a lesion simultaneously, or (III) lesion biopsy implemented due to a new episode of recurrence. The final time to recurrence (either intrahepatic or extrahepatic) was estimated by clinical doctors. The final follow-up data included in this study were collected in June 2018.

All statistical analyses were performed with IBM SPSS Statistics 23. TFS curves were constructed using the Kaplan-Meier method and compared with a log-rank test. A Cox proportional hazard model was established to evaluate the independent risk factors for postoperative recurrence. A two-tailed P value <0.05 was considered significant.

Surgical approaches had no impact on the prognosis of all patients 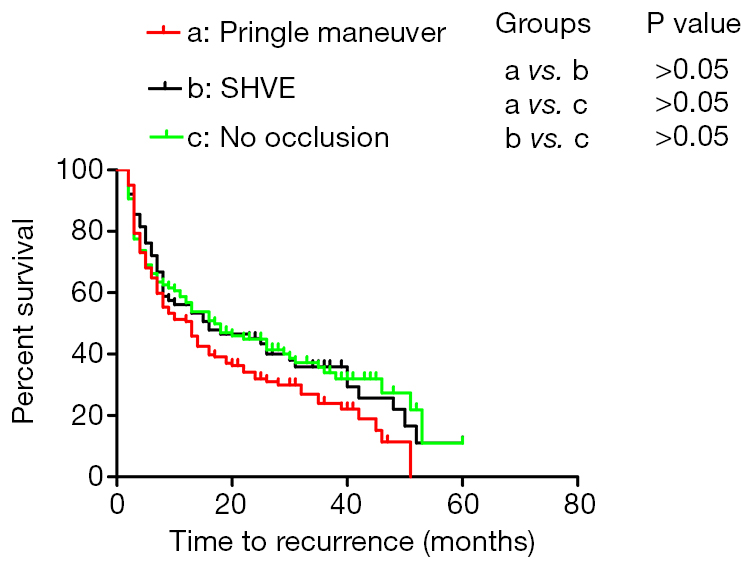 Figure 1 No difference was shown in TFS among patients who underwent the three different surgical approaches for all patients. TFS, tumor-free survival.

Characteristics of the patients with BCLC stage A disease 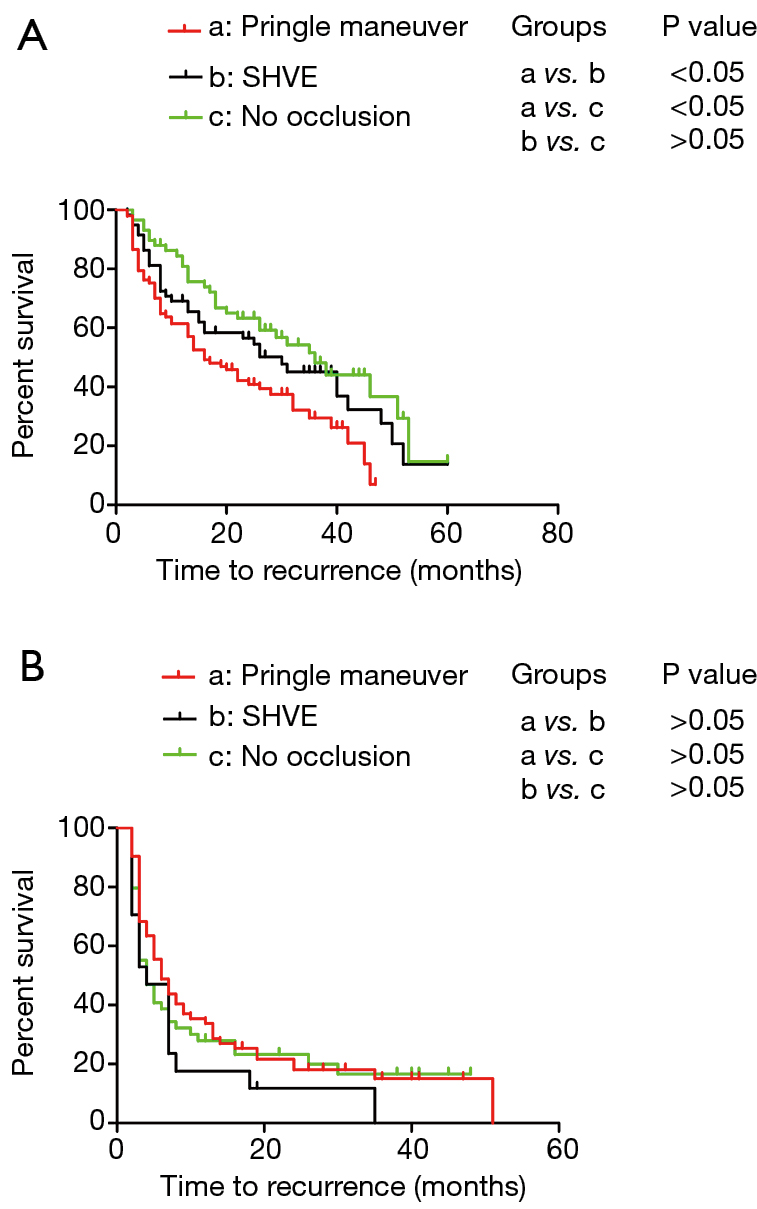 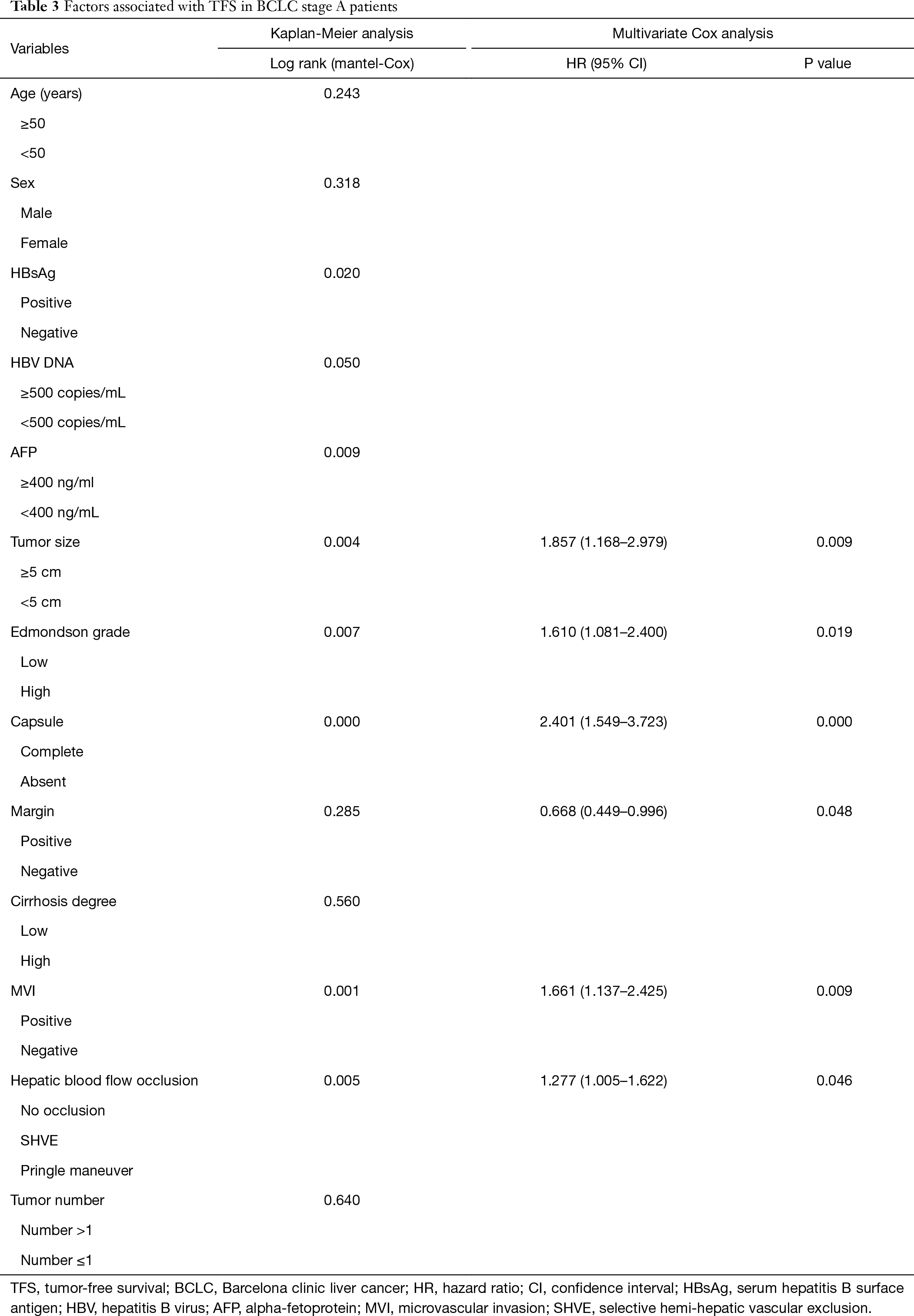 Characteristics of the patients with BCLC stage B–C disease 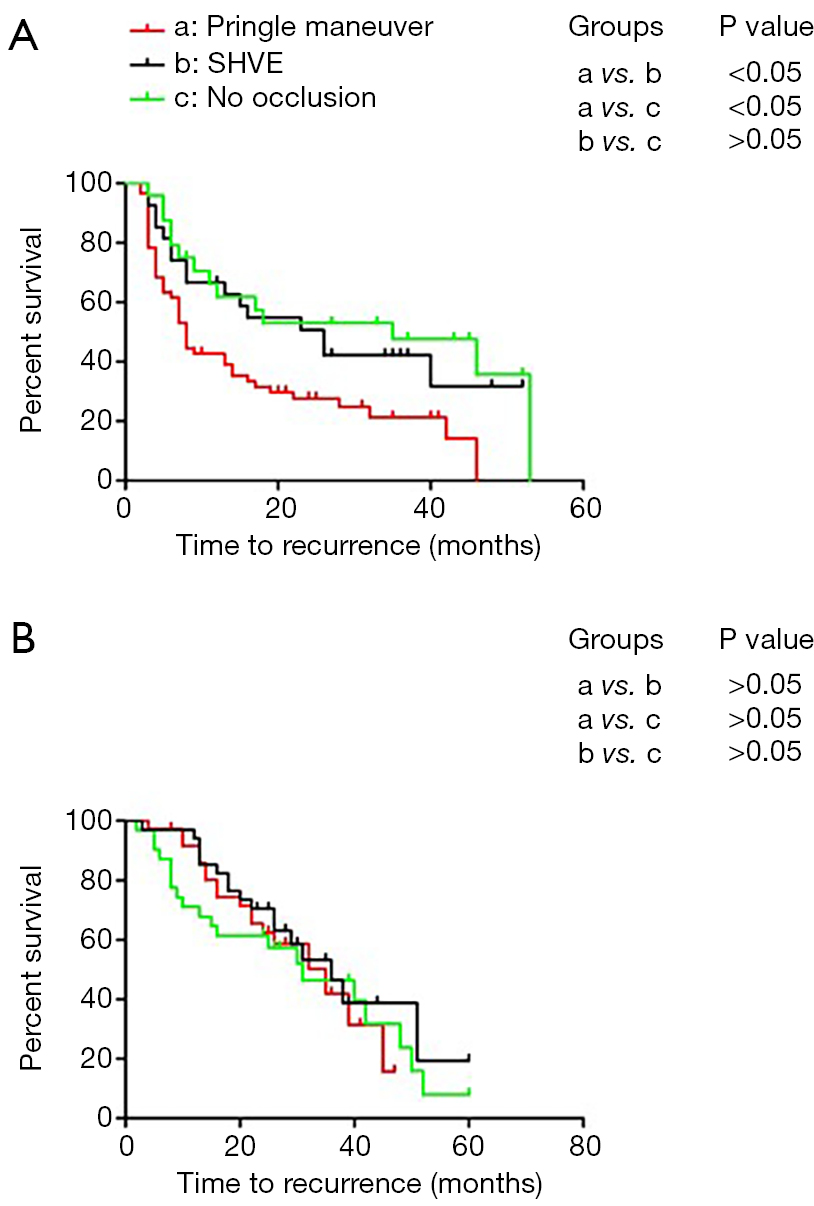 It has been one hundred years since the Pringle maneuver was developed, and this technique still has both pros and cons. With the introduction of precision therapy, SHVE has also been frequently used during hepatectomy, and sometimes, performing surgery without hepatic vascular occlusion is feasible (10). However, the effect of the surgical approach on the prognosis of HCC patients has been continuously disputed.

In contrast to a previous study, this study separated patients into three groups, including a Pringle maneuver group, hemi-hepatic vascular occlusion group and no hepatic vascular occlusion group (20). Special analyses of patients with early stage disease and those with intermediate/advanced disease were performed. The present study demonstrated that there was no significant difference in the recurrence rate or TFS among the three groups. These results are consistent with the outcomes reported in a previous study (20). We also found that the patients treated with the Pringle maneuver had the worst median TFS among the three groups, although no significant association was found between the surgical approach and prognosis. Hence, further analysis involving patients with different BCLC stages was performed. In the present study, there was no significant difference in TFS among the BCLC B–C stage patients treated with different approaches for hepatic inflow occlusion. This result indicated that surgical approaches for hepatic inflow occlusion have no influence on the prognosis of HCC patients with intermediate/advanced disease. High intracorporal tumor dissemination and PVTT are commonly found in patients with BCLC B–C stage disease, and both are indicative of more serious disease before surgery, which may offset the effect of the operative method. Therefore, it seems reasonable that there was no significant difference in TFS among the three groups of patients with advanced stage disease (BCLC stage B–C).

Ethics Statement: The authors are accountable for all aspects of the work in ensuring that questions related to the accuracy or integrity of any part of the work are appropriately investigated and resolved. In accordance with the Declaration of Helsinki, this study was approved by the Institutional Review Board of the Affiliated Tumor Hospital of Guangxi Medical University (No. LW2019019). Informed consent was obtained from all voluntary participants for their clinical cases to be used in the present study.