In the United States, it is estimated that approximately 13,170 patients will be diagnosed with cervical cancer in 2019, while approximately 4,250 women will die from this disease (https://seer.cancer.gov/statfacts/html/cervix.html). In contrast, cervical cancer is the second most commonly diagnosed cancer, accounting for about 98.9/1,000 new cases and about 30.5/1,000 deaths estimated in 2015 in China (1). Patients with distant metastasis (disseminated cervical cancer) as the first manifestation are classified as stage IVB according to the International Federation of Gynecology and Obstetrics (FIGO version 2018). Patients who develop distant metastases are rarely curable. The 5-year survival of stage IVB patients ranges from 0 to 44% and approximately 50% of these patients show a fatal outcome within 1 year (2). For patients with stage IVB cervical cancer, there are two types of metastasis. If the involved sites are lymph nodes (LN) outside of the pelvic and para-aortic LNs, the type of metastasis is designated as lymphatic; otherwise, the type of metastasis is designated as hematogenous. Patients with hematogenous metastasis had a 5.3-fold higher risk of death than those with lymphatic metastasis alone (3).

On the one hand, due to the application and popularization of cervical cancer screening and vaccines, fewer patients were diagnosed with advanced cervical cancer. Lack of case numbers leads to a deficiency of related researches. On the other hand, due to the diversity of clinical manifestations of stage IVB patients, it is not feasible to carry out uniform treatment modality. It is desperately in need to evaluate the different modalities on the prognosis for this group of patients. Our study tried to analyze clinical and prognostic information in these patients, and contribute to clinical practice by reviewing the medical records.

Between March 2005 and December 2017, the medical records of patients with stage IVB (FIGO 2018 version) cervical cancer in Fudan University Shanghai Cancer Center (FUSCC) were reviewed. Only patients with hematogenous metastasis as the primary manifestation were included in this study. Patients were excluded from this analysis if they only had distant LNs metastasis. All of the patients had signed informed consent for donating their information for clinical research. The study was conducted by the Declaration of Helsinki and was approved by the FUSCC research ethics committee. The distant spread of tumor was confirmed by imaging studies, such as computed tomography (CT), magnetic resonance imaging (MRI), positron emission tomography-CT (PET-CT) or biopsy of metastatic sites if possible. We collected the clinical characteristics such as age, performance status, tumor size, histology, levels of squamous cell carcinoma antigen (SCCA), white blood cell (WBC) and hemoglobin (Hb) count, number and sites of metastasis, treatment modalities, recurrence and survival. Single metastatic organ referred to metastasis to one of the following organs: bone, lung, liver, ovary and brain. Multiple metastatic organs referred to one or more of the above sites with or without metastasis to mediastinal, supraclavicular or other distant LNs.

Targets of the palliative radiotherapy included primary cervical tumors or distant metastases. Palliative radiotherapy targeting gross cervical tumor consisted of high-dose-rate intracavitary brachytherapy with or without a combination of external-beam irradiation (EBRT), delivered with/without concurrent chemotherapy such as DDP [weekly cisplatin (40 mg/m2)]. Distant metastases that are not controlled by chemotherapy were amenable to radiotherapies such as bone or brain irradiation.

Patients underwent surgery included radical hysterectomy and bilateral salpingo-oophorectomy, or palliative resection of the metastatic lesion, which was the residual lesion after the chemotherapy.

Other patients who refused chemotherapy or radiotherapy or with unknown treatment information were defined as not available group.

Patients were followed up every 3 months for the first two years after the treatment, every 4 months for the 3rd year, every 6 months for the 4th and 5th years, and annually for the following years after that. Progression free survival (PFS) was calculated from the time of diagnosis to the date of clinically-proven progression. OS was defined as the length of time from the date of diagnosis to the date of cancer-related death or the last visit. Data analysis was performed using SPSS ver. 24.0 (SPSS Inc., Chicago, IL, USA). The Kaplan-Meier method was used to obtain estimates of survival and survival curves. The differences in OS or PFS were compared using the log-rank test. Cox regression models were used to estimate the main effects of clinical factors for patients’ survival. Variables with P<0.2 in univariate analysis were included in multivariate analysis. A probability value of less than 0.05 was considered statistically significant. 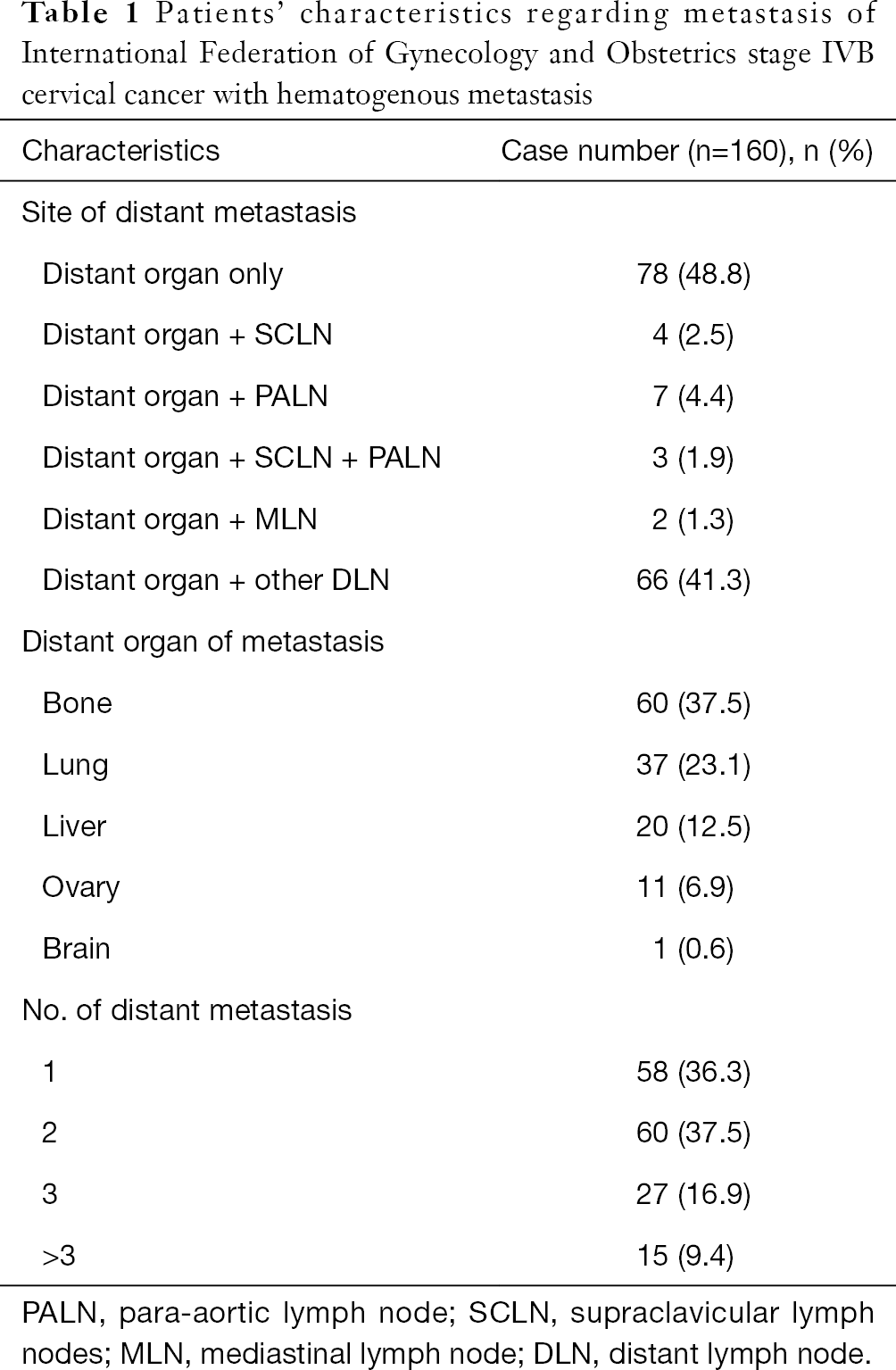 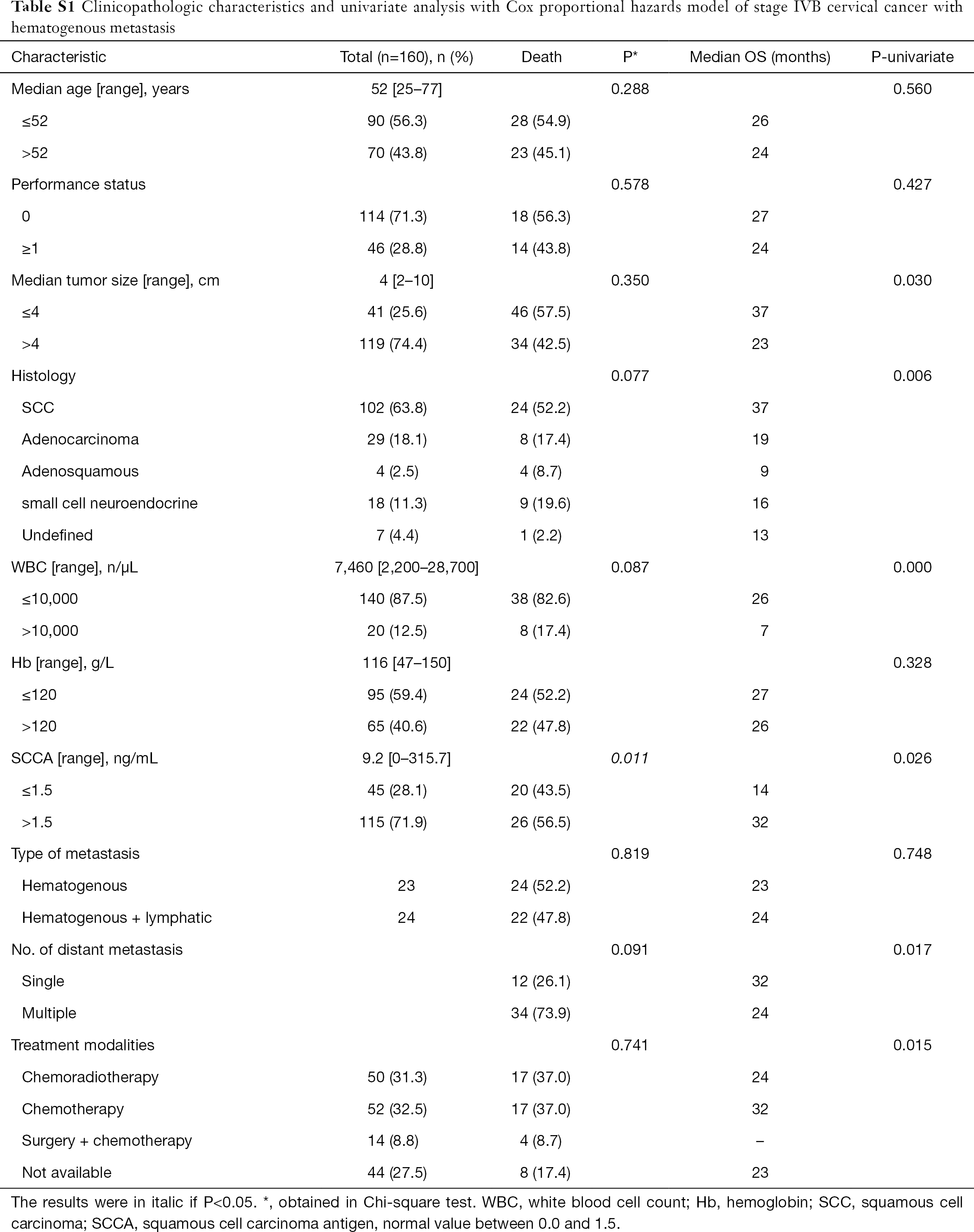 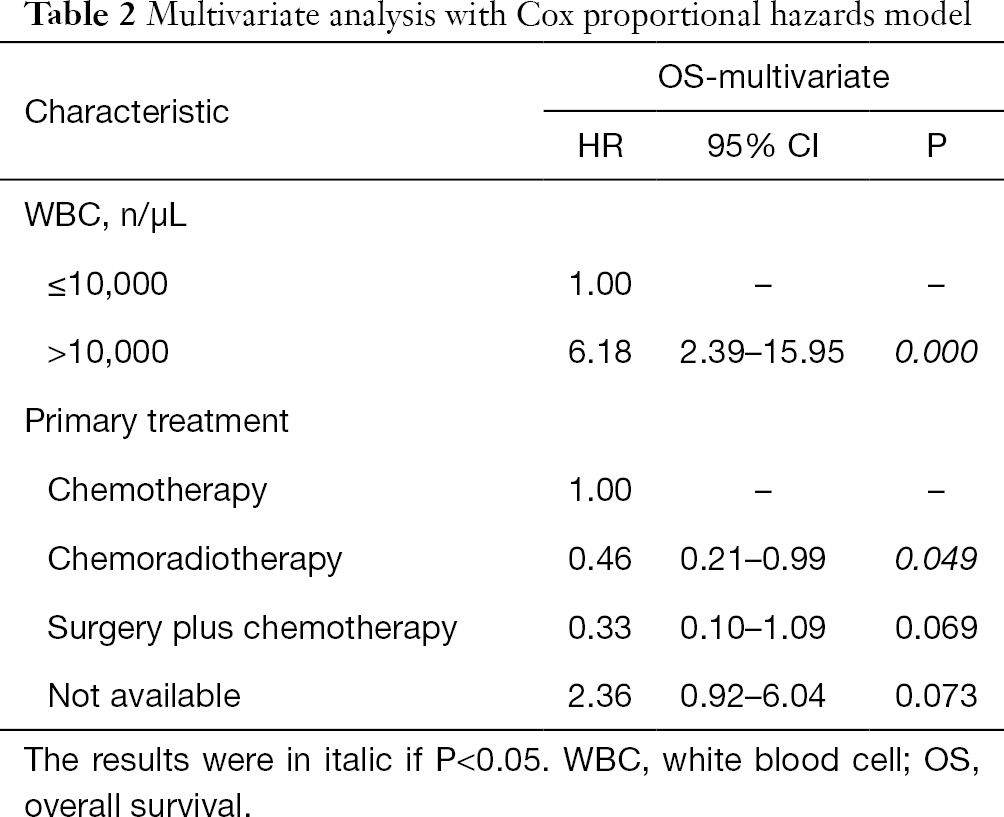 In this study, we retrospectively evaluated clinical characteristics of stage IVB cervical cancer with hematogenous metastasis. We demonstrated that the median duration of PFS and OS was 15.5 and 26 months. In multivariate analysis, the WBC was reported as an independent risk factor of PFS (P=0.012, HR =3.25, 95% CI, 1.30–8.14) and OS (P=0.000, HR =6.18, 95% CI, 2.39–15.95). Besides, chemoradiotherapy was associated with better survival in stage IVB cervical cancer patients with hematogenous metastasis.

WBC count was a significant prognostic factor for PFS and OS in stage IVB cervical cancer patients with hematogenous metastasis. In non-hematological malignancies, previous studies show that the frequency of leukocytosis is ranging from 16% to 30% (10,11). Leukocytosis is common in different kinds of cancer and is associated with poorer prognosis of lung cancer (12), esophagus cancer (13), bladder cancer (14) and gynecologic cancers (15-17). In cervical cancer, tumor-related leukocytosis (TLR) occurs in 9.3–16% of patients with cervical cancer (11,17,18). On the one hand, cancer-associated leukocytosis leads to increased levels of several inflammatory cytokines, which contribute to creating a microenvironment that promotes carcinogenesis and tumor progression (19). On the other hand, TLR suppresses host immunity and promotes tumor angiogenesis, then resulted in rapid tumor progression and poor prognosis (10). In our study, TLR occurred in 12.5% (20/160) stage IVB cervical cancer patients with hematogenous metastasis. Consistent with the previous study, our study also suggested that leukocytosis was reported as an independent risk factor of survival.

The use of radiotherapy and chemotherapy are amenable to stage IVB patients with good performance status, and resulted in higher survival rates (6,7). Kim et al. confirmed the role of chemoradiotherapy in 24 stage IVB cervical cancer patients with distant LN metastasis (8). Another study recruited patients diagnosed with para-aortic and left supraclavicular lymph nodal metastases, suggested curative CCRT as a feasible modality with acceptable late toxicity and high response rates (20). However, stage IVB cervical cancer patients with hematogenous metastasis have not been discussed. In our study, chemoradiotherapy significantly prolongs PFS and OS compared with the chemotherapy group, which extended from 24 to 32 months of OS, which offers more practice experience for the treatment of stage IVB cervical cancer. The potential importance of radiotherapy in this group of the patient might be explained as follows.

Although chemotherapy can dramatically reduce the tumor burden, it can hardly eliminate the primary lesions. These residual resistant cancer stem cells might become the source of uncontrolled recurrence or metastasis afterward. Radiation contributes to eliminating the lesion, especially the chemoresistant stem cells, thus stopped the source of further progression, which may enhance the cytotoxic effects of chemotherapy (21). On the other hand, as a local treatment, radiotherapy can effectively control the symptoms of bleeding, pain, and involvement of surrounding organs caused by the tumor. Thus, chemoradiotherapy is not only useful for local control but also reduces the incidence of disease progression, which turns to longer survival. Mechanisms that underlie the interaction between drugs and radiation may include inhibition of potentially lethal or sublethal damage repair and an increase in the chemo-radiosensitivity of hypoxic cells (22). However, it is well-known that toxicity increases when combining radiotherapy with chemotherapy. Radiotherapy should be applied to patients with good response to chemotherapy with caution to the toxicity. Technical development in radiotherapy may improve local control and decrease the treatment-related toxicities (6). In addition, for some patients who are the candidates of radical hysterectomy, the role of surgery should be evaluated in the future, because of the limited number of cases in this study.

Bevacizumab is a kind of anti-VEGF antibodies, which is widely used in different kinds of malignant tumors (23). According to previous reports, compared with the control treatment, the addition of bevacizumab to traditional chemotherapy improved the median OS (17.0 vs. 13.3 months) in cervical cancer patients with recurrence, persistence, or metastasis. In our study, only 9 patients were administered with cisplatin-paclitaxel-bevacizumab regimen. However, we did not observe the noteworthy significance for the prognosis of patients with stage IVB cervical cancer as the limited number of patients. The high price of bevacizumab hindered its application in the developing countries. Clinical trials which aim to confirm the role of bevacizumab or other innovative treatment such as target therapy or immunotherapy in stage IVB cervical cancer patients are desperately in need.

There were some limitations in this retrospective study. First of all, there existed selection bias. For example, patients with good performance status and good response to chemotherapy might receive radiotherapy. However, those with extensive disseminated disease, poor performance status and poor response to chemotherapy might receive chemotherapy only. Also, chemoradiotherapy group included patients with palliative radiation to metastatic sites. Second, different histology of cervical cancer has completely different response to treatment. Further study should focus on the role of radical radiotherapy in stage IVB squamous cervical cancer. Third, there are limited data about the outcome of patients treated with surgery plus chemotherapy group. The median OS time could not be calculated because the survival status (dead or alive and time of death) was insufficient for the 14 patients. In the previous study, surgery improved local control of neoplasia but did not contribute to OS in that set of patients with extra residual tumor (24). However, if surgery covered metastatic sites, patients might benefit more. Li et al. have reported that for patients with solitary pulmonary metastatic tumors, surgery combined with chemotherapy can provide a better prognosis (25). Therefore, it remains elusive whether surgery together with chemotherapy or radiotherapy improves OS or not. Nevertheless, this is the first paper discussing the clinical characteristics and the effect of different treatment modalities in stage IVB cervical cancer patients with hematogenous metastasis, which might provide some guidance in clinical practice.

In conclusion, for patients with stage IVB squamous cervical cancer who have hematogenous metastasis, leukocytosis was an independent death risk factor. Chemoradiotherapy may be used to achieve longer survival. However, it deserves large scale prospective clinical trials to confirm.

Ethical Statement: The authors are accountable for all aspects of the work in ensuring that questions related to the accuracy or integrity of any part of the work are appropriately investigated and resolved. The study was conducted by the Declaration of Helsinki and was approved by the FUSCC research ethics committee. All of the patients had signed informed consent for donating their information for clinical research.