Although cervical cancer is the most common gynecologic malignancy, its occurrence is rare in pregnant woman with an incidence of approximately 1 per 1,200 to 10,000 pregnancies (1). The association between cancer and pregnancy appears to be a significant challenge for women and specialists and the decisions about therapy must be individualized and taken by a multidisciplinary team (2). Standard treatment for patients with locally invasive cervical cancer in the absence of pregnancy could be concurrent chemoradiotherapy (CCRT) or neoadjuvant chemotherapy (NACT) followed by surgery (3,4). However, the optimal treatment for cervical cancer diagnosed in pregnancy is not always clear (5). NACT is an innovative way of managing cervical cancer during pregnancy. It helps in controlling the disease and delaying delivery in patients whose fetuses have not reached the state of viability. It may also help in reducing the tumor size and, thus, improve local control by irradiation or surgical resection (6). It has been reported that platinum-based NACT administered during the second or third trimester of pregnancy could help in controlling the disease and delaying delivery until fetal maturity without serious adverse events on the mother and the fetus (7,8), but it is a dilemma as to how clinicians should deal with cases of locally invasive cervical cancer that are insensitive to NACT. Here, we present the clinical outcomes of different reactions to a NACT regimen in two cases of pregnant patients diagnosed with cervical cancer.

A 28-year-old patient, G2P1, presented to our institution complaining of intermittent watery discharge in the 20th week+ of gestation. The local hospital suspected that she might have suffered premature rupture of membranes. The vaginal examination revealed a large friable, hemorrhaging, exophytic lesion occupying 75% of the cervix. The biopsy pathology revealed a high-grade squamous intraepithelial lesion with invasive squamous carcinoma not excluded. Since the pathological diagnosis was insufficient and the tumor was displaying bulky exogenous growth extending to the vagina, partial resection of the cervical tumor (only the protuberant mass of the cervix was resection and the original cervical and vaginal tissues were avoid destroyed) was performed at the 20th week +5 days of her gestation. Considering the combined pathological and gynecologic examination results, cervical squamous carcinoma IB2 was diagnosed.

After partial resection, the patient decided to proceed with the pregnancy. Three cycles of NACT (TC regimen: cisplatin and paclitaxel every 21 days) was indicated. The patient tolerated the therapy well and had a good response to NACT, displaying low chemotherapy toxicity. No obvious side effect was observed. A check-up was performed every 4 weeks that involved an ultrasound examination, detection of the squamous epithelium cell carcinoma (SCC) antigen level, as well as the bimanual examination. The patient went into labor at 35 weeks and 5 days and underwent a caesarean delivery. The newborn weighed 2.46 kg, with Apgar scores of 10/10. The platinum concentration in the baby’s peripheral blood at 4 months after birth was detected as 0.00029 µg/g. The patient received the 4th round of NACT on the 30th day after the cesarean section. The colposcopy showed that the cervix had fairly recovered to be close to its original shape (Figure 1). On the 60th day after cesarean section, radical hysterectomy plus resection of the bilateral oviducts and pelvic lymphadenectomy was carried out under laparoscopy. The histopathological analysis showed highly differentiated squamous cell carcinoma infiltrating the cervical wall <1/2 and no pelvic lymph node metastases. Regular follow-ups involving a clinical examination, Pap smear, ultrasonic imaging, and SCC testing over 48 months have not revealed any signs of a tumor recurrence and her child is growing healthily (normal blood routine examination, blood biochemical indicators, cardiac evaluation and cognitive development), thus far.

A 23-year-old patient, G1P0, presented with irregular bleeding at 9 weeks and there was no significant improvement of bleeding after progesterone treatment. Cytology results showed atypical squamous cells, while a high-grade lesion (ASC-H) could not be excluded. A large friable tumor of about 5×7 cm2 was found in her cervix and contacted bleeding. The vault had disappeared, and the left main ligament was thickened and shortened, as observed on pelvic examination at 22 weeks and 5 days of pregnancy. Squamous cell carcinoma was diagnosed by biopsy. Magnetic resonance imaging (MRI) showed an irregular mass of 7.3×2.8 cm2 on the left lateral wall of the cervix, involving left parametrial and posterior fornix close to the anterior wall of the rectum (stage IIB).

The patient had a desire to preserve the pregnancy and two cycles of TC (cisplatin and paclitaxel) regimen was indicated at the 23rd week and the 27th week of gestation. Despite this, the tumor reduction effect was not significant. A BVP (Bleomycin, Vincristine, Cisplatin) protocol, administered intravenously, at the 32nd week was indicated. A cesarean section was conducted at the 35th week of her gestation due to tumor growth and its insensitivity to NACT. The newborn weighed 2.17 kg, with Apgar scores of 10/10. The platinum level of the baby’s umbilical blood was 0.0075 µg/g. Breastfeeding was not adopted after the birth. BIP (Bleomycin, Ifosfamide, and Oxaliplatin) was intravenously injected into the patient 2 weeks after delivery. 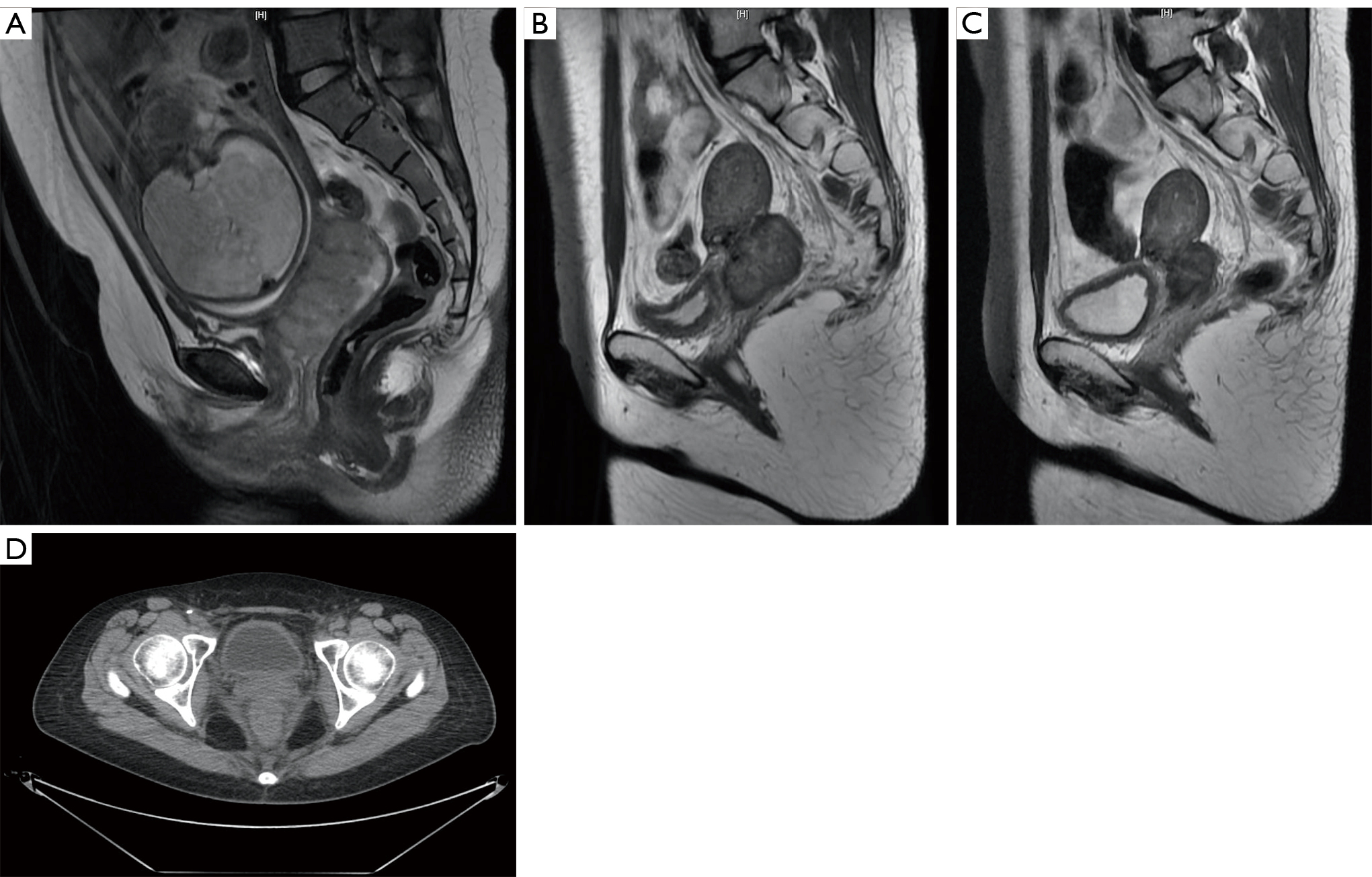 Cancer during pregnancy is defined as a tumor diagnosed in pregnant women or in the immediate postpartum period. The rarity of the condition makes large trials or randomized studies impossible, and guidelines up until now are based on small case series and expert opinions (9). A decision on treatment must consider many factors including gestation age (GA) at diagnosis and the patient’s preferences with regard to the pregnancy outcome. In cases where pregnancy preservation is not the aim, management can be similar to the management of nonpregnant women (9). When the patient chooses to preserve the pregnancy, surgery is recommended in early-stage of the disease (Stage IA–IB1). Radical trachelectomy (RT) with pelvic lymphadenectomy has been reported as an option for young patients with early invasive uterine cervical cancer who decide to maintain their fertility (10). However, this operative method is a great challenge not only for gynecologic oncologists but also for obstetricians because of its operative radicality and extremely high risk of abortion during the operation and of preterm labor after it. It is not commonly recommended by the European Society of Gynecological Oncology (EMSO) guidelines (9).

In more advanced cases (IB2–IIA), NACT is an approach used in the management of these patients. The goal of NACT is to stabilize the tumor while simultaneously preventing tumor dissemination, therefore, making fertility-preserving treatments more feasible (11).There is growing evidence of maternal safety and good obstetrical outcome of NACT administered during pregnancy (12). NACT drugs used to treat cervical cancer in pregnancy include cisplatin, vincristine, and bleomycin. More recently, there have been more reports on the use of carboplatin and paclitaxel (13). Platinum derivatives are efficacious drugs in the treatment of cervical cancer for the low concentrations required for the drug to cross the placental barrier (14). Experience with paclitaxel is relatively more limited than with platinum; the feasibility and relative safety of administering taxanes during the second and third trimesters of pregnancy, when indicated, has been assured (15). The use of bleomycin has also been reported be used in cervical cancer during pregnancy (9,16). Vincristine, an antimicrotubular antineoplastic agent, also has minimal teratogenic effects. The combination of vincristine and cisplatin has also been recommended for the NACT of cervical cancer during pregnancy (7). However, the application of ifosfamide during pregnancy is not recommended because its potentially damages fetal kidneys (17).

The two cases reported had different responses to NACT. Case 1 had good response to NACT with partially bulky exogenous tumor resection. The patient has been observed without non-tractable bleeding and tumor cell spread. It is the first partially excision following NACT treatment reported in China. The case 2 showed critical preterm delivery decision would be made with low sensitive response to NACT with TC and BVP regimens treated. She had a good response to CCRT and intra-arterial chemotherapy following guidance after baby birth. A short conclusion could be made that NACT could be used during gestation period and CCRT and/or intra-arterial chemotherapy might be the choice of treatment after the birth in the low NACT sensitive pregnant patient.

It has been reported that prenatal exposure to maternal cancer with or without treatment did not impair the cognitive, cardiac, or general development of children in early childhood (12). The cisplatin measurements in neonatal blood have no accurate reference. Some literature report that the cisplatin concentrations in the umbilical cord and amniotic fluid were 31–65% and 13–42% of the maternal blood, respectively (18). The cisplatin concentrations of two cases (one from peripheral, the other from cord blood) have been measured in a low level. Cardiac evaluation of the two children was performed at 36 months of age and cognitive development was observed during follow-up. The two cases in our study have been followed for 48 and 41 months, respectively. Follow-ups showed that the two patients were alive and their children were in good health, without physical and mental retardation. A close follow-up is still under way. It has also been indicated that chemotherapy had no clear adverse effects on the postnatal growth or on cognitive or cardiac function in the follow-up of the two children.

In conclusion, although the treatment of cervical cancer during pregnancy varies in each case, both have good prognosis results. Personalized treatment should be considered by physiological and psychological state of patient. From these two cases we conclude that, (I) NACT is an attractive and viable option in the management of locally advanced cervical cancer in pregnancy and can safely preserve the gestation; (II) For the patient whose tumor is not sensitive to chemotherapy, NACT can be administrated to maintain the gestation and CCRT and/or intra-arterial chemotherapy might be the treatment of choice(s) after the birth.

Funding: This work was supported by Beijing Natural Science Foundation (7174359) and The National Key Research and Development Program of China (2016YFC1302901).