Liver cancer is the fifth most common cancer, the second most common cause of death from cancer worldwide, and is associated with a high recurrence rate. Reports from 2012 estimated 782,000 new cases and 745,000 liver cancer-related deaths, with an annual incidence of 5.6% (1).

Hepatocellular carcinoma (HCC) is the most common form of primary liver cancer (~90% of all cases) and is still associated with a poor survival rate after resection surgery. Many questions remain to be answered regarding HCC pathogenesis, which severely hampers our ability to develop novel and effective therapies for this dreadful disease (2).

The tumor microenvironment, basically comprises tumor, stromal, and immune cells, and is strongly influenced by the local balance of pro-inflammatory and anti-inflammatory cytokines (3). Inflammation plays a critical role in the genesis of HCC (4). Interleukin-10 (IL-10) is a cytokine mainly produced by B and T lymphocytes and macrophages that plays an essential role in limiting pro-inflammatory immune responses by inhibiting the effector function of Th1 cells (5). Deregulation of IL-10 expression is associated with allergic, autoimmune, and infectious disorders, along with cancer (6). Decreased expression of IL-10 typically leads to increased pro-inflammatory cytokine secretion and hinders anti-tumor immunity, thereby favoring tumor growth. As an anti-inflammatory and immunosuppressive cytokine, the IL-10 family of cytokines has vital functions closely related to immune tolerance in the tumor microenvironment, and its deficit can contribute to immune escape of neoplastic cells (7). Several studies have reported elevated IL-10 levels in HCC patients (8). Chan et al. found that hepatic injury in unresectable HCC patients could lead to higher serum IL-10 levels due to cirrhotic processes, rather than tumor load, and suggested the potential prognostic value of circulating IL-10 for these patients (9). Xue et al., on the other hand, proposed that the presence of a large number of IL-10+ B cells, observed in resected HCC samples, was responsible for restraining CD4+ cytotoxic T cell activity (10). Chau et al. found much higher serum levels of IL-10 in HCC patients than in healthy subjects and suggested that pre-surgical serum IL-10 levels are related to postoperative survival (11). A study by Hsia et al., meanwhile, proposed that serum IL-10 could serve as an HCC biomarker to help identify HCC cases with low levels of α-fetoprotein (AFP) (12).

Little is known about the tissue-specific regulation of IL-10 expression in HCC and other cancers. Gene methylation is a prominent epigenetic mechanism that regulates the expression of tumor-related genes in virtually all types of cancer. Previous studies suggested that promoter methylation in cytokine genes contributes to cancer pathogenesis by shaping inflammatory responses in the tumor microenvironment (13). Epigenetic analysis of the promoter of the IL-10 gene in B cells highlighted the importance of methylation and acetylation polymorphisms in inflammatory diseases such as periodontitis (14). Along these lines, hypomethylation of a proximal CpGs site within the IL-10 promoter was correlated with abnormal IL-10 mRNA and serum levels in rheumatoid arthritis patients (15). Another study showed that the methylation status of the IL-10 gene is reduced in patients with systemic lupus erythematosus, and suggested that detection of hypomethylated IL-10 promoter may be a clinical predictor in autoimmune diseases (16). On the other hand, IL-10 promoter methylation was found to be lower in breast cancer specimens compared with healthy breast tissues, leading the study authors to propose that hypomethylation of the IL-10 gene is involved in breast carcinogenesis (17).

Our previous studies analyzed promoter methylation patterns and highlighted the contribution of specific epigenetic events to HCC pathogenesis and progression (18). In the present study, we assessed the methylation status of the IL-10 promoter in matched HCC and non-tumor tissues to test the hypothesis that elevated IL-10 production correlates with hypomethylation of the IL-10 promoter in HCC. Our results indicate that IL-10 gene methylation could play a role in determining IL-10 mRNA expression and might be a useful prognostic indicator of outcome in HCC patients.

Matched tumor and surrounding non-tumor tissues were obtained from patients with a histologically confirmed diagnosis of HCC (n=120) that underwent surgical resection between 2007 and 2016 at Changzhou Cancer Hospital in China. The samples were frozen in liquid nitrogen right after surgical resection. Patients in this study were 96 men and 24 women, aged 39 to 85 years old [mean ± standard deviation (SD): 55.32±13.25 years]. We defined HCC classification by the 8th edition of AJCC for HCC [2017] (19). The study proposal and all ethical proceedings were approved by the committee on Human Experimentation of Changzhou Cancer Hospital. Written informed consent using a standardized questionnaire was obtained from all participants. 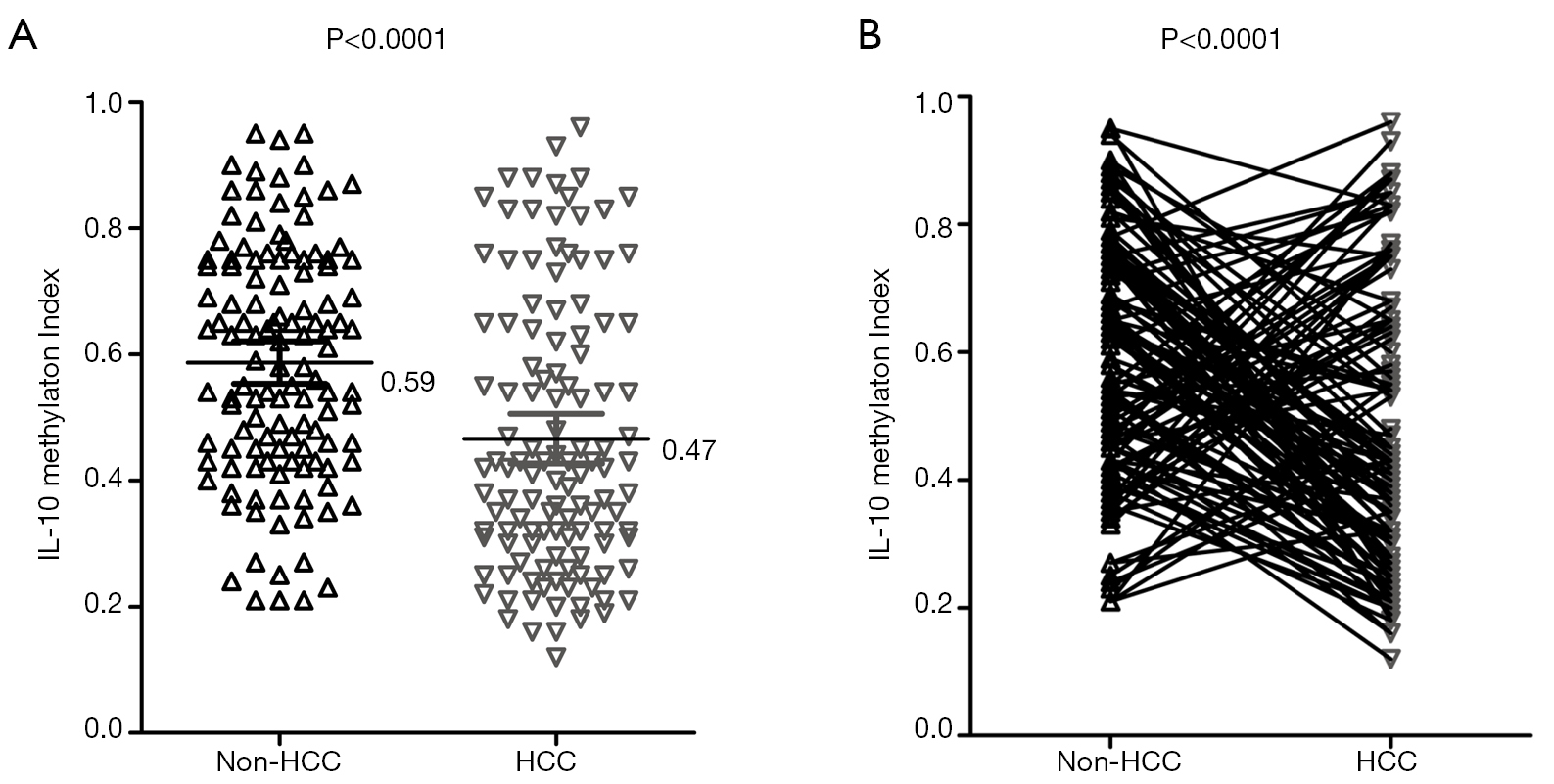 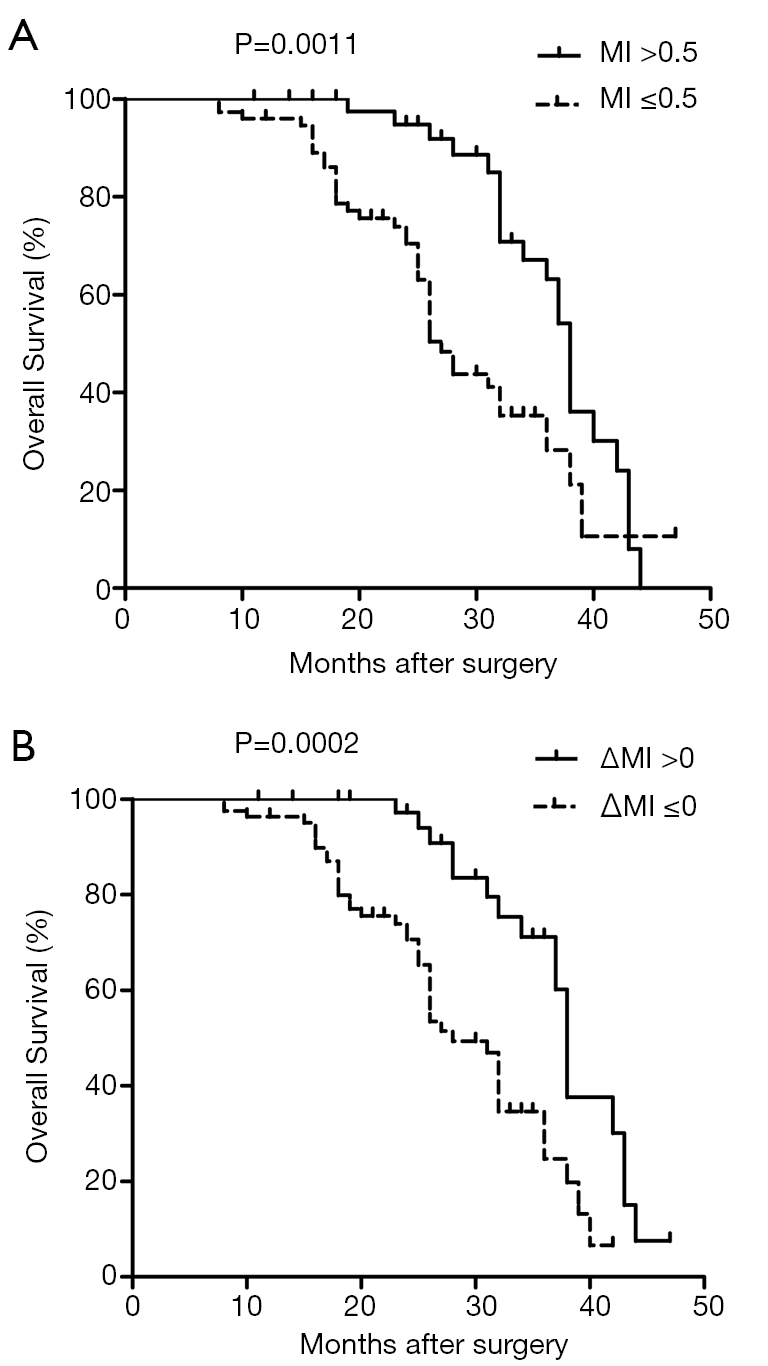 Correlation between IL-10 mRNA expression and clinicopathologic features of HCC 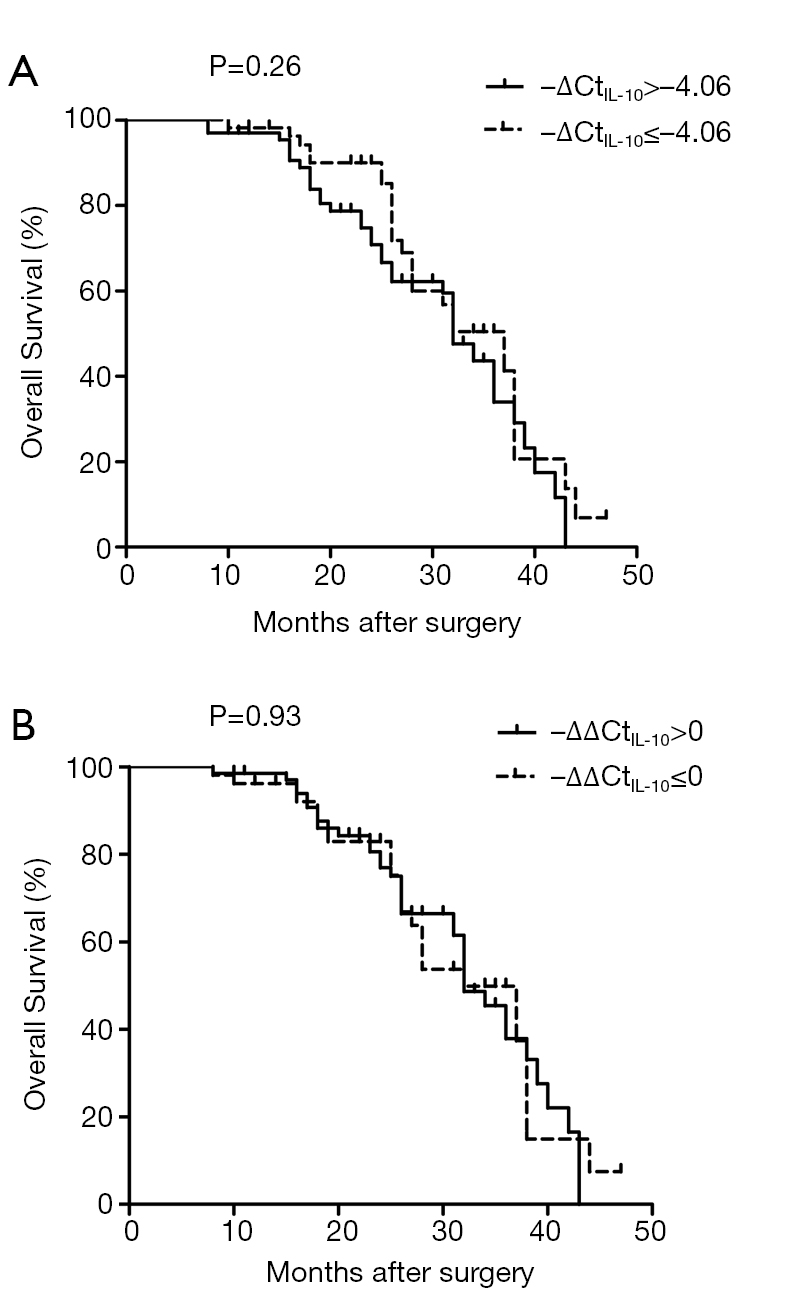 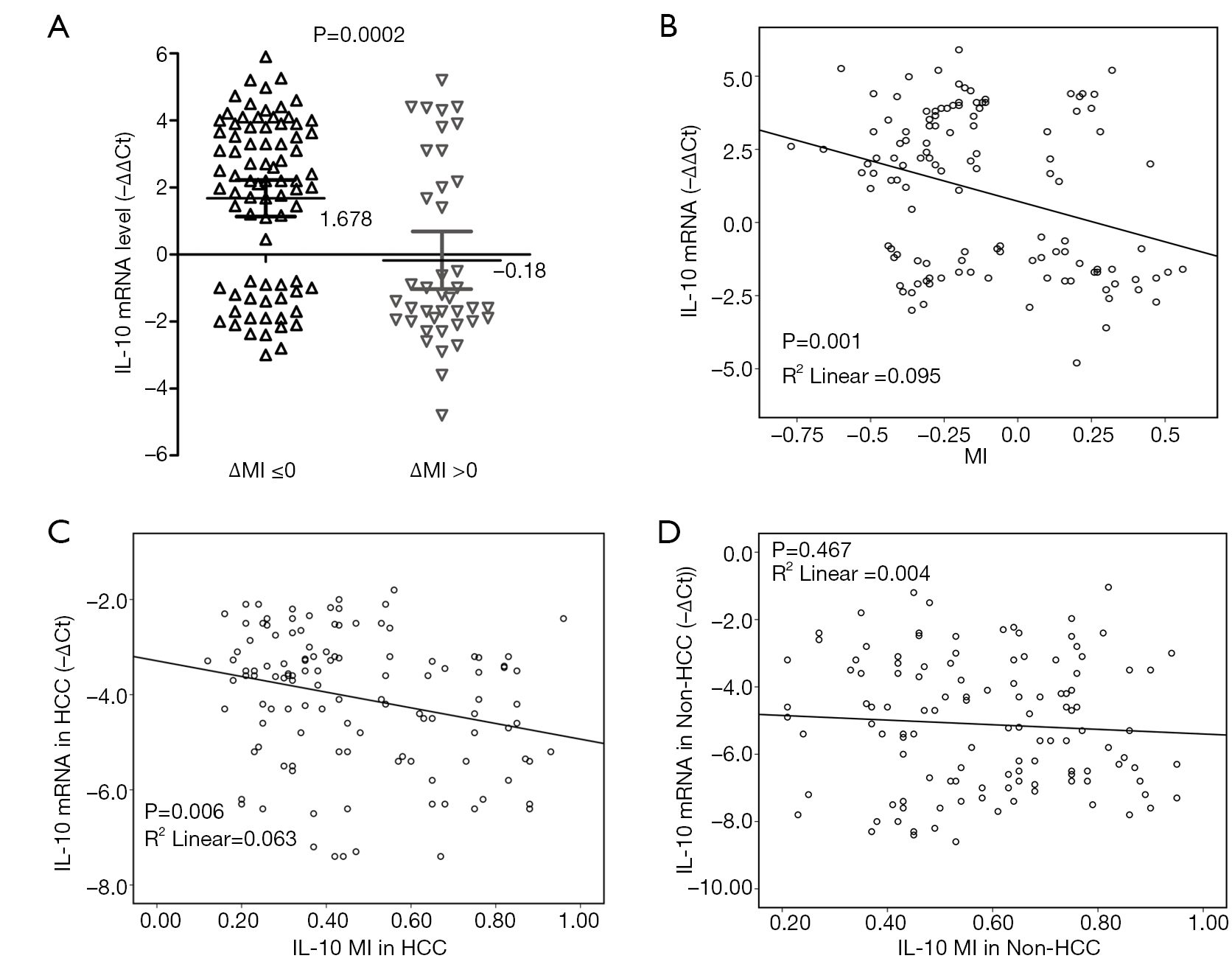 Chronic inflammatory liver disease and liver cirrhosis are the main risk factors for the development of HCC, the most common form of primary liver cancer, which is now the second leading cause of cancer-related deaths worldwide (1). Tumor metastasis is the primary cause of death in HCC patients. The tumor microenvironment plays critical roles in hepatocarcinogenesis and is a main determinant of metastatic progression. Inflammatory cytokines promote chronic inflammatory liver disease and, as cancer eventually develops, sustain tumor progression through a complex interplay with both tumor cells and carcinoma-associated immune cells (22,23).

IL-10 is an anti-inflammatory cytokine that is highly expressed in HCC. While IL-10 overexpression correlates with tumor progression and has a predominantly immunosuppressive role, it is not clear whether an association between IL-10 expression and the risk for developing HCC exists (24). Thus, addressing the molecular mechanisms regulating IL-10 expression should lead to a better understanding of the pathophysiological involvement of this cytokine in HCC. The present study shows that hypomethylation of the IL-10 gene promoter correlates with increased IL-10 mRNA expression in clinical HCC samples, and is a predictor of poor outcome. Moreover, the IL-10 MI is related to tumor metastasis classification; i.e., hypomethylation is more prevalent in HCC patients classified as M1 rather than M0 (metastasis-free), and is also inversely related to serum AFP levels, a common diagnostic and prognostic biomarker of HCC. In addition, we detected a significantly shorter survival (27 months) in HCC patients with hypomethylated IL-10 genes compared with patients with IL-10 hypermethylation (38 months). HCC patients with IL-10 gene hypomethylation also had a shorter median cumulative survival of 28 months compared with 38 months for those with hypermethylated IL-10. These results suggest that IL-10 hypomethylation might be a useful prognostic factor in HCC.

Our study found that IL-10 mRNA levels were overall higher in HCC samples than in paired non-tumor specimens, and also correlated with metastatic status and elevated serum AFP. However, a relationship between IL-10 mRNA levels and HCC outcome could not be established. Our previous research investigated IL-10 gene expression in clinical HCC samples and indicated its key role in the pathogenesis of this disease. While DNA methylation exerts widespread control of gene transcription, several other regulatory mechanisms intervene at the mRNA and protein level. Thus, further studies addressing the regulation of IL-10 at the mRNA and protein levels in a more extensive population sampling are warranted to clarify this discrepancy.

The importance of epigenetic regulation of oncogene, tumor suppressor gene, and cytokine expression has received substantial support in recent years, as aberrant DNA promoter-specific hypermethylation or hypomethylation was shown to contribute to the development of human cancers (25,26). In a previous study, we performed a large-scale promoter methylation analysis of tumor-related genes in HCC and normal surrounding tissues and found various types of abnormal methylation patterns in HCC. Specifically, we reported that Line-1 gene hypomethylation was the most common molecular abnormality in HCC, and this event was associated with the overexpression of CD133 mRNA (18).

Hypermethylation of CpG dinucleotides in gene promoter regions is typically associated with transcription silencing, while hypomethylation usually leads to activation of gene expression (27). Accordingly, our study found that hypomethylation of the IL-10 promoter prevailed in HCC patients (66.7%) and correlated with higher IL-10 mRNA levels, while IL-10 mRNA expression was decreased in the remaining HCC patients (33.3%) with hypermethylated IL-10. In future research, it will be of interest to investigate the molecular bases of the biphasic distribution of IL-10 methylation profiles observed in our study; based on the present data, we speculate that IL-10 demethylation may represent a molecular switch indicative of metastatic progression in HCC (28).

In sum, the hypomethylation of the IL-10 gene promoter was significantly correlated with increased IL-10 mRNA expression in clinical HCC samples. But the results in our study have some limitations due to individual differences between tumor patients and data of recurrence cannot be obtained. A more thorough understanding of the mechanisms of epigenetic deregulation of the IL-10 gene and the role its transcript plays in the tumor microenvironment might lead to the development of novel targeted therapies for HCC.

Ethical Statement: The authors are accountable for all aspects of the work in ensuring that questions related to the accuracy or integrity of any part of the work are appropriately investigated and resolved. All of the patients gave written informed consent, and approval was given by the Ethics Committee of Changzhou Cancer Hospital of Soochow University (No. 2016006).