As a novel cytokine, interleukin-35 (IL-35) exerts immune-suppressing effects (1). It comprised of two subunits, including the Epstein-Barr virus-induced gene 3 (EBI3) and IL-12p35 (2). It has been illustrated that secretion of IL-35 is exerted by Foxp3+CD4+CD25+ Tregs or a Foxp3− Tregs population (2,3). Some studies found that IL-35 inhibits the activity of Th1, Th2 and Th17, and expands Tregs (3,4). The deficiency of IL-35 can significantly reduce the regulatory activity of Tregs, resulting failure to alleviate inflammatory bowel disease in vivo (2). However, the effect of IL-35 in malignant disease is not investigated in detail.

Recently, reports have shown that IL-35 is highly expressed in serum of patients and tumor tissues with prostate cancer, breast cancer and non-small cell lung cancer (NSCLC) (5-7). Our previous study has demonstrated that IL-35 expression was obviously up-regulated in the tumor tissues of laryngeal squamous cell carcinoma (LSCC) compared with the adjacent normal tissues, while IL-35 expression was significantly reduced in patients’ peripheral blood after surgical resection (8). It has been illuminated that immune system involves in regulating progression of tumorigenesis (9). Among this system, the suppressive activities of regulatory T cells (Tregs) occur against tumor-specific T-cell responses (9,10). Furthermore, IL-35 can promote tumor angiogenesis and inhibit anti-tumor cytotoxic lymphocyte (CTL) response (7,11). In our previous study, we also found limited activity of anti-tumor CTL in a mice model with head and neck squamous cell carcinoma (12). However, there is little evidence about how IL-35 affects anti-tumor CTL response. Here, we aimed to investigate the potential mechanism of the function of IL-35 on anti-tumor CTL.

BM cells were harvested with a syringe and a 26-gauge needle from the tibias and femurs, which were obtained via cervical dislocation of the sacrificed mice under sterile conditions, followed by lysing the erythrocytes with the RBC lysis buffer and cultured the cells in RPMI-1640 complete medium containing rmGM-CSF (20 ng/mL), which was replaced with new medium every 2 days. At day 6, the cells were collected as DC for further use of the experiments.

The spleen was teased to obtained the suspensions of the spleen cell (SC), followed by lysing the erythrocytes using RBC lysis buffer. After centrifuging for 5 min at 200 ×g, the SCs were placed in RPMI-1640 complete culture medium, which were used for CD8+ T cells isolation with magnetic CD8a (Ly-2) microbeads according to the instruction of the manufacturer (Miltenyi Biotec, Germany). The purity (>90%) of CD8+ T cell was assayed with staining of CD8a antibody (Miltenyi Biotec, Germany), followed by analyzing with a Becton-Dickinson FACS Calibur flow cytometer. A hemocytometer was used to count the purified CD8+ T cells and trypan blue was used to assess the cells viability, which exceeded 90%.

CD8+ T cells (2×106) were incubated in 1 mL PBS containing 1 µL CFSE (final concentration 2.5 µM) (Cell-Trace CFSE Proliferation Kit, Molecular Probes, Invitrogen, USA) for 15 min in the darkness, pipetting up and down every 5 min. After stopping the reaction with 2 mL PBS with 5% FCS, the cells were centrifugated and washed for 3 times. The stained cells were then placed in Transwell plates with SCC VII activated DCs for 5 d. The analysis was performed on a Becton FACScan (Mountain View, CA, USA).

Supernatant collected from the in vitro cultures was analyzed for IL-1β, IL-6, IL-10, IL-12p70, IFN-γ, IL-4 and TNF-α according to the manufacturer’s instruction (eBioscience).

The treated cells were lysed on ice using RIPA lysis buffer (Beyotime, Guangzhou, China) containing inhibitors of protease and phosphatase. BCA methods was used to quantify the concentrations of the proteins. After adding a quarter volume of 5× SDS-PAGE Sample Loading Buffer, the protein samples were boiled for 10 min and separated on an SDS-polyacrylamide gel using electrophoresis at 250 mA for 2.5 h, followed by transferring to polyvinylidene fluoride (PVDF) membrane (Millipore, Darmstadt, Germany). The membrane was then blocked with 3% skimmed milk for 1 h, incubated with a primary antibody at room temperature for 1 h, washed with TBST for 3 times. After incubating with a horseradish peroxidase-conjugated secondary antibody (1:3,000 dilution) for 1 h, the membrane was visualized with an ECL kit.

Data were processed as mean ± standard deviation (SD). For comparison between groups, the Student’s t-test was performed and the statistical difference was seen as significant when P≤0.05. 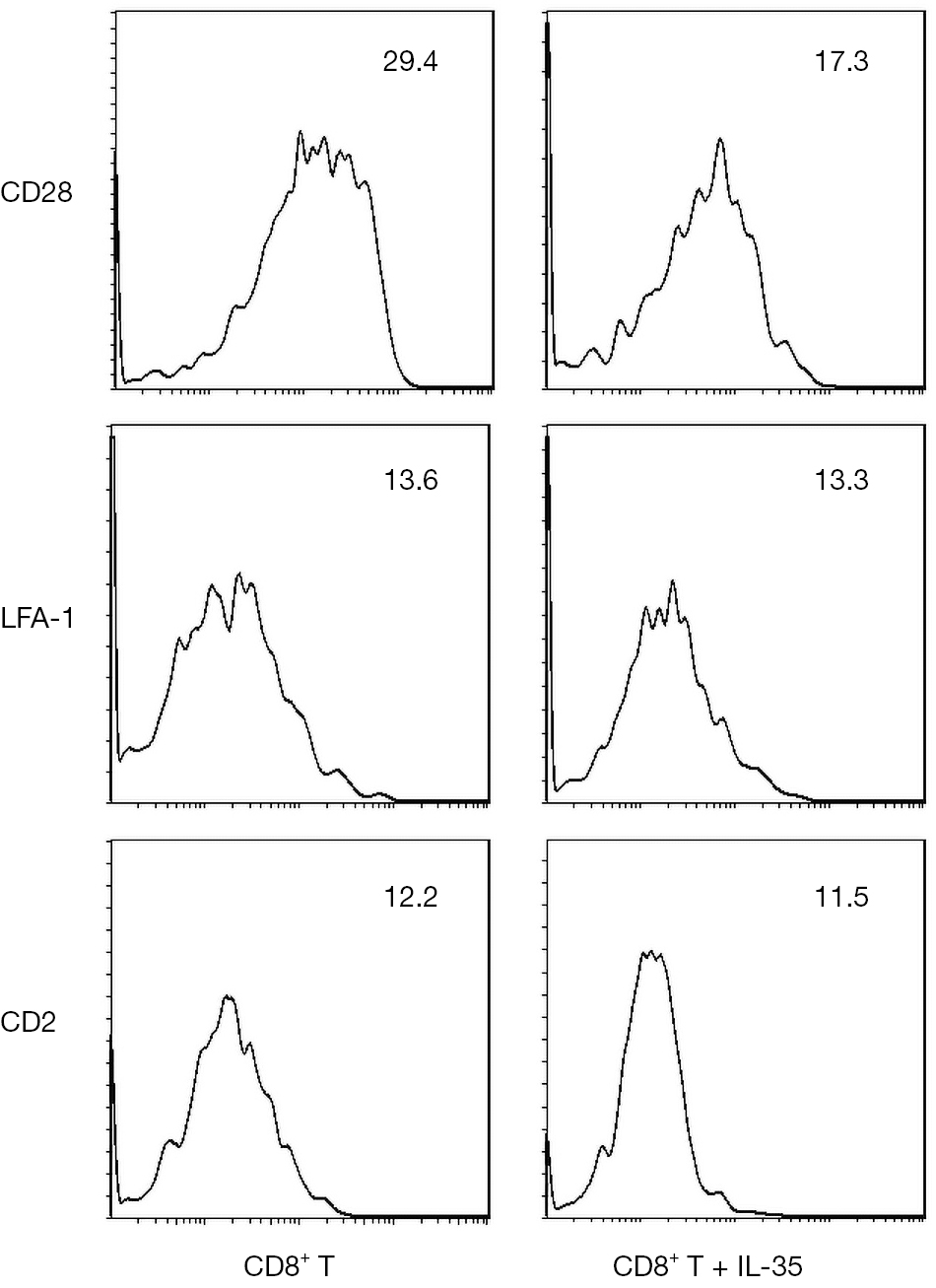 After being incubated with SCC VII cells, pulsed-DCs were used to activate CD8+ cytotoxic T cells by co-culturing with or without IL-35 for 5 days. The CFSE-labelled activated CTL was processed by flow cytometry, the results of which showed no statistical differences with or without IL-35 (data not show).

To determine if IL-35 enhances the expression of apoptosis-related proteins of anti-tumor CTL, the activated CD8+ cytotoxic T cells cultured with IL-35 were harvested and the protein levels of nuclear transcription factor NF-kappa B (NF-κB) and apoptotic protein caspase-3 were determined by Western blot. As a result, no statistical differences were detected in the expression of both NF-κB and caspase-3 of CTL with or without IL-35 (Figures 2,3).

Figure 2 The impact of IL-35 on the expression of nuclear transcription factor NF-κB of the activated CD8+ cytotoxic T cells. 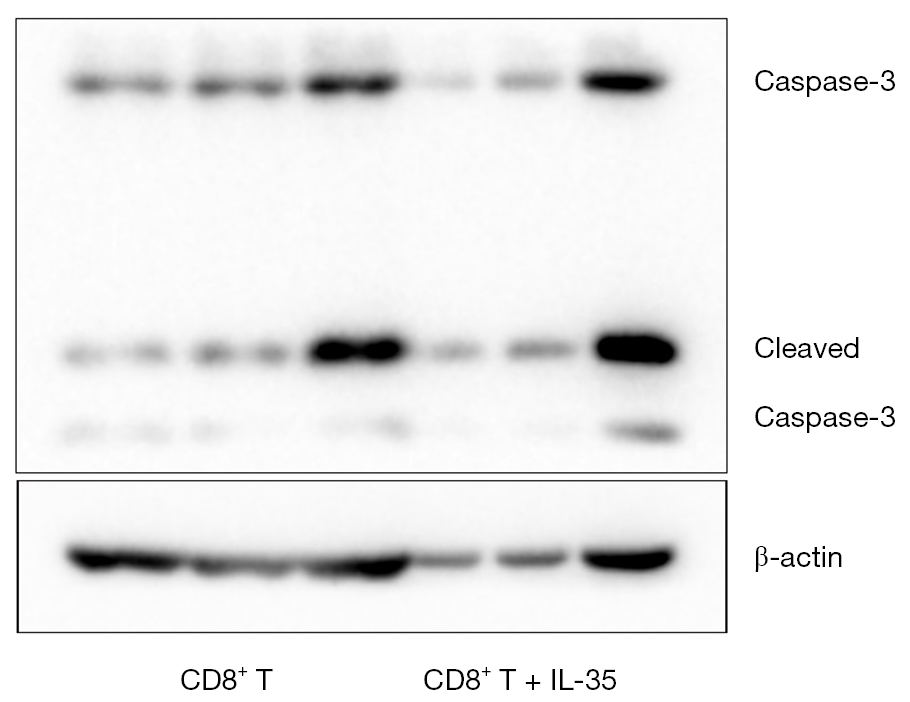 Figure 3 The impact of IL-35 on the expression of apoptotic protein caspase-3 of the activated CD8+ cytotoxic T cells. 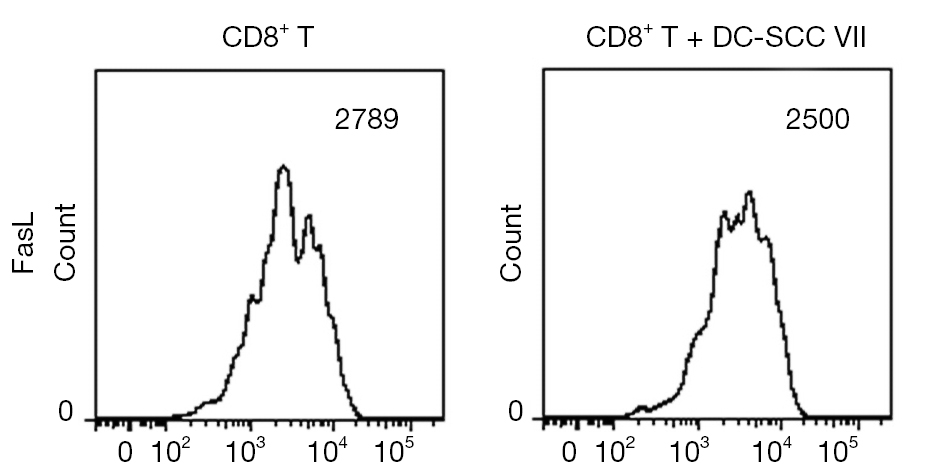 Figure 4 The impact of IL-35 on the expression of Fas ligand (FasL) on the surface of activated CD8+ cytotoxic T cells. Data are shown as 1 typical result from 6 independent experiments with similar results. The differences of the expression of FasL on cytotoxic lymphocyte (CTL) surface between two groups do not reach a statistical significance (P>0.05).

IL-35 has been considered as new member of the IL-12 family (2). It has been illustrated that IL-35 inhibits T cells proliferation and transforms T cells into suppressive inducible Tregs (3). Recently, some studies have demonstrated the expression of IL-35 is correlated with tumor progression, including breast cancer, NSCLC and prostate cancer (5,6,13). Moreover, our previous study found that IL-35 is expressed highly in the peripheral blood and tumor tissues of patients with LSCC (8). Turnis et al. using an IL-35 reporter mouse find that the tumor growth was suppressed in the condition of IL-35 specific antibody mediated neutralization or Treg cell-restricted deletion of IL-35 production of various murine models of human cancer (14). These findings revealed that IL-35 exerted its effects in suppressing anti-tumor immunity. However, the suppressive mechanism of IL-35 on anti-tumor immune responses is very limited.

Here, the effect of IL-35 on anti-tumor CTL was investigated. CTLs are considered as critical effectors of anti-tumor immune responses (15). In previous study, we elicited anti-LSCC CTLs were proved to have a strong anti-LSCC effect in vitro. But, in vivo, the activity of anti-LSCC immunotherapy is limited (12). Based on previous findings, we hypothesized that IL-35 could inhibit anti-tumor CTL responses. To test this hypothesis, we first explored the effect of IL-35 on the surface molecular expression of naïve CD8+ T cells. We observed that IL-35 decreased the costimulatory molecule CD28 but not adhesion molecules. As a key T cell costimulatory molecule, CD28 binds B7 molecules on the surface of professional APC (16,17). Professional APCs, such as DCs, upregulate B7 molecules upon pathogen uptake and can thus efficiently induce responses in CD4+ and CD8+ T cells that harbor the primary costimulatory receptor CD28 (18,19). It has been found that CD28− T cells lack CD28/B7 costimulatory pathway, which may contribute to functional impairment and a low proliferative capacity of this T cell subset (20). Our findings indicated that IL-35 may inhibit the differentiation of naïve CD8+ T cells into anti-tumor CTL by decreasing the costimulatory CD28, which was contrary to other IL-12 family cytokines such as IL-12, which can upregulate CD28 expression (21).

The effects of IL-35 were further investigated on anti-tumor CTL proliferation and apoptosis. As a result, we did not observe that IL-35 could directly inhibit CTL proliferation. Moreover, IL-35 did not impact on the expression of apoptosis-related proteins NF-κB and caspase-3 in anti-tumor CTL. NF-κB is an apoptosis inhibitor, which plays a critical role in the anti-apoptosis regulation of tumors (22). Caspase-3 is the effector of the caspase enzyme system (23). Furthermore, multiple cell apoptosis elements exert their function via the caspase enzyme system (24). Wang et al. also demonstrated IL-35 cannot suppress tumor antigen specific CTL proliferation directly. But they did not report the impact of IL-35 on the apoptosis of the anti-tumor CTL (11). Shao et al. investigated IL-35 function in infection of chronic hepatitis B virus and found IL-35 elevated apoptosis in peripheral blood mononuclear cells (25). While the study by van Bergen et al. illustrated that IL-12-induced suppression of CD8+ CTL clones did not result in apoptosis (26).

We further demonstrated that IL-35 significantly inhibits Th1 cytokine production. Th1 cells are one of the two main Th cells and Th1 differentiation is IL-12 dependent (27). The main effector cells of Th1 immunity are CD8+ T cells. It has been found that Th1 cells activate anti-tumor cytotoxic CD8+ T cells by activation the APCs which activate the CTL via antigen presentation (28). Th2 suppresses Th1 differentiation and function of DCs (29). The polarization of Th2 is associated with tumor proliferation (30). Thus, the reduction of Th1 cytokine production may partly inhibits activation of anti-tumor CTLs. Otherwise, CD28/B7 pathway is crucial for activation of Th1 lymphocytes (31). In this study, we found IL-35 inhibited CD28 expression on naïve CD8+ T cells, which consequently also inhibited activation of Th1 cells and anti-tumor CTLs. Similar to our findings, recent study illustrated IL-35 suppresses the activity of Th1 (3). Zhang et al. reported that IL-35 inhibits Th1 cytokine secretion under normal conditions in mice (32). Moreover, Choi et al. identified that IL-12p35 could inhibit the expansion of Th1 cells (33).

Finally, we found that IL-35 does not suppress the level of FasL on CTL surface. FasL, belonging to the tumor necrosis factor family, can bind to its receptor Fas, thus leading the apoptosis induction of Fas-expressing cells (34). FasL, predominantly expressed in activated T cells, can down-regulate T cell-mediated cytotoxicity (34). It has been revealed that FasL-dependent CTL effector pathway is vital for optimal tumor regression (35). Our findings indicated that IL-35 failed to directly suppress tumor antigen-specific CTL effector function that mediated by FasL-Fas pathway. Other study also illustrated that IL-35 does not suppress CTL cytotoxicity directly (11). But IL-35 mediated expression of FasL on anti-tumor CTL surface was not reported in their study.

Taken together, our investigation revealed that IL-35 did not directly suppress anti-tumor of CTL or promoted anti-tumor apoptosis of CTL, and not suppress tumor antigen-specific CTL effector function. But, IL-35 may suppress the differentiation of naïve CD8+ T cells into differentiate into anti-tumor CTL by decreasing the costimulatory molecule CD28 expression on naïve CD8+ T cell surface, and inhibit anti-tumor CTL activation by inhibiting activation of Th1 cells which may partly be attributed to CD28 expression decreasing. These results may help to better understand the function of IL-35 in tumor immune escape.

Ethical Statement: The authors are accountable for all aspects of the work in ensuring that questions related to the accuracy or integrity of any part of the work are appropriately investigated and resolved. All procedures performed in studies involving animals were in accordance with the ethical standards of the institution.