The expression and role of trefoil factors in human tumors

The trefoil factor (TFF) family consists of three members: TFF1, TFF2, and TFF3. They are also called breast cancer-associated peptide (pS2), spasmolytic peptide (SP), and intestinal trefoil factors (ITF). The gene encoding the human TFF family is located on chromosome 21q22.3 (1). This family is made of small cysteine-rich polypeptide whose secondary structure consists of 38–39 amino acids formed by 6 highly conserved cysteine residues to form three intramolecular disulfide bonds folded into a “trefoil” structure. The “trefoil domain” is also called the P domain. One such motif is found in TFF1 and TFF3, whereas TFF2 possesses two trefoil domains. The trefoil domain is very stable; such that TFFs are strongly resistant to acid, protease hydrolysis and heat. Therefore, TFFs can maintain their biological activity in the complex physiological environment of the gastrointestinal tract, with the function of mucosal protection and epithelial restitution (2).

TFFs function to protect mucosa, promote epithelial repair, inhibit inflammation, regulate cell proliferation, apoptosis and migration. Rapid increase in expression of TFF1 and TFF2 at the margins of digestive tract ulcers promotes migration of epithelial cells (7). TFF2 promotes the repair of gastric mucosal injury by increasing the migration of human colonic epithelial cells and by inhibiting the occurrence of acute gastric injury (8). TFF3 plays a pivotal role in maintaining the integrity of the gastrointestinal mucosa and promoting repair (9). In addition, TFF3 expression increases in corneal diseases and promotes corneal repair (10).

Over the past few decades, a large number of studies have found abnormal expression of TFFs in many types of tumors, where they were involved in tumorigenesis and tumor development, which are closely related to the malignancy and prognosis of tumors. However, contradictory results were also found in some tumors.

The expression of TFFs in tumors

As shown in Table 1, studies have found increased expression of TFF members in multiple tumors. In addition to the high expression of TFF1 in gastric cancer, TFF1 and TFF3 in 97 patients with colon cancer were significantly higher than those in 79 healthy people (32). Using an immunohistochemical method, researchers found that the expression of TFF3 in thyroid papillary carcinoma was higher than in adjacent precarcinomatous tissue in 31 cases of thyroid papillary carcinoma (13). A clinical study showed that the positive expression rate of TFF3 increased from normal gastric tissues to paracancerous tissues and gastric cancer tissues, which were 5.0%, 40.0% and 58.6% respectively. The expression of TFF3 in gastric cancer tissues was related to the stage of local lymph node metastasis and prognosis (19). Another study found that the serum TFF3 concentration in patients with gastric cancer was significantly higher than that in the healthy counterparts (20). The increased expression of TFF3 protein in breast cancer was positively correlated with tumor size, lymph node metastasis, poor survival and prognosis (26). In addition, a two-step immunohistochemical method was used to detect the expression of TFF3 in 90 pairs of hepatocellular carcinomas (HCC) tumor tissues and non-cancerous adjacent tissues. The results showed that the positive expression rate of TFF3 was 62.1% in tumor tissues and 33.8% in adjacent tissues. The difference between the two groups was statistically significant (17). 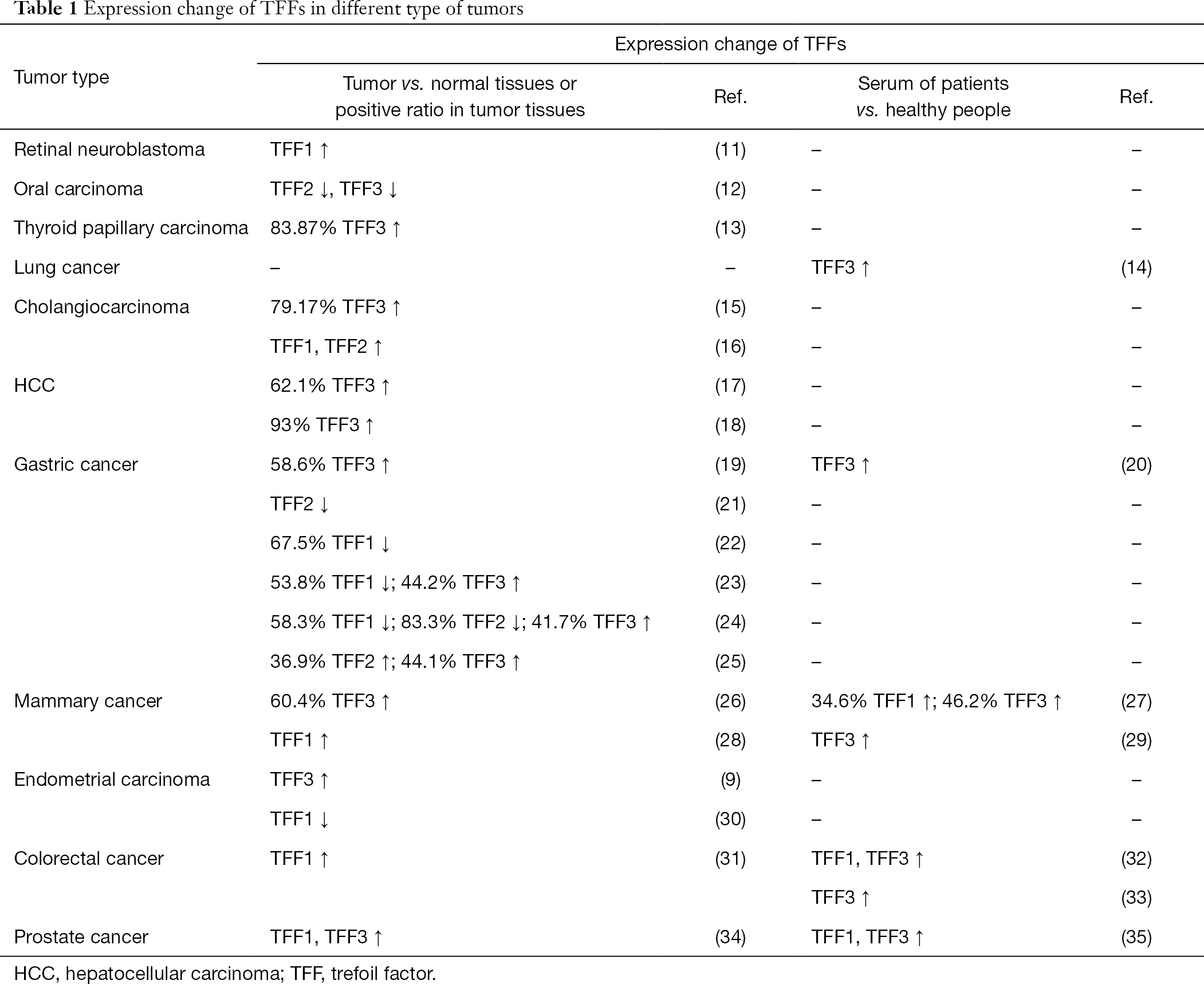 Contrary to the aforementioned studies, the expression of TFF1 and TFF2 in normal gastric mucosa, paracancerous tissues and gastric cancer tissues decreased gradually, suggesting that TFF1 and TFF2 proteins may be specific inhibitors of gastric cancer and important protective factors for the digestive tract mucosa (21). There are two explanations for the deletion of TFF1 expression in gastric cancer. The first is a somatic mutation, since the TFF1 gene locus 21q22 is frequently mutated and allelic deletion is common (36). The second explanation is the hypermethylation of the promoter region of the TFF1 gene in gastric cancer and intestinal metaplasia, resulting in transcriptional silencing of the TFF1 gene (37). Buache et al. (38) found that the incidence rate, number and size of breast tumors induced by dimethylbenzanthracene (DMBA) in TFF1-KO mice were higher than those in wild-type mice. TFF1 can act as a tumor suppressor and inhibit the development of tumors in breast epithelial cells. This is consistent with the clinical findings of primary breast cancer, in which patients with TFF1 positive expression received better prognosis. In addition, in type I endometrial carcinoma, TFF3 up-regulation was found to be positively correlated to the outcome of patients (9).

The role and mechanism of TFFs

In vitro and in vivo experiments showed that TFFs can affect tumor development mainly by affecting tumor cell apoptosis, cell proliferation, metastasis and angiogenesis, which are summarized in Figure 1.

Figure 1 The functionary mechanisms of trefoil factors in tumors (25,30,39-62). (A) The anti-tumor impact of TFFs has been found to occur through promotion of apoptosis, inhibition of cell proliferation and cell migration. (B) The pro-tumor impact of TFFs has been proved to occur by the inhibition of apoptosis, promotion of cell proliferation, cell migration and angiogenesis. TFF, trefoil factor.

However, other authors have found that TFFs can promote tumor cell apoptosis. Overexpression of TFF1 has been found to significantly increase the apoptosis level of retinoblastoma (RB) cells, and decrease cell viability, proliferation and growth. The inhibitory effect of TFF1 on RB cells is partly mediated by the activation of p53 and down-regulation of miR-18a. The activated tumor suppressor gene p53 itself can induce apoptosis and cell cycle arrest (39). The pro-apoptosis effect of TFF2 was stronger than the anti-apoptosis role in isolated mouse retina. The recombinant TFF2-mediated apoptosis is dependent on caspase proteins. TFF2 administration could down-regulate STAT3 activation, thus decreasing the expression of apoptosis suppressor genes and cell cycle regulators, and promoting apoptosis of mouse retina cells (40).

However, some authors reported that TFFs can inhibit tumor cell proliferation. TFF1 could inhibit the activity of G1/S- specific cyclin-D1 and cyclin dependent protein kinase (CDK) 4 complex, which retards the initiation of S phase during the cell cycle and arrests the cells at the G1 stage, preventing cell proliferation (41). Transcription factor E2F is the main regulatory factor for cells entering S phase. TFF1 mediates the increased level of CDK inhibitors to decrease the transcriptional activity of E2F, preventing cells from entering S phase (42). Uchino et al. (43) found that the overexpression of TFF3 inhibited EGFR phosphorylation and cell proliferation in human colon cancer cell lines. Mitogen-activated protein kinase (MAPK) is a type of serine/threonine protein kinase in cells. Studies have shown that the signaling pathway of MAPKs exists in most cells, transducing extracellular stimulation signals into cells and nuclei, and inducing biological responses such as; cell proliferation, differentiation, transformation and apoptosis. Extracellular regulated protein kinase (ERK) is key to transmitting signals from surface receptors to the nucleus. Kosriwong et al. (16) found that TFF3 reduced the phosphorylation of MAPK/ERK and thus, significantly suppressed cell proliferation and growth, differentiation and apoptosis.

Migration is also essential for epithelial restitution, during which the first step is the reduction of cell-cell contact. TFF3 can reduce the activity of E-cadherin by up-regulating the expression of TWIST1 (56), which destroys the intercellular adhesion and makes tumor cells separate. TFF3 can activate ErbB2 and then activates c-Jun N-terminal kinase (JNK), p38 and the phosphoinositide 3-kinase (PI3K)/protein kinase B (PKB) pathway. JNK may promote migration through focal adhesion disassembly. Increased MAP kinase-activated protein kinase 2 (MAPKAPK2) phosphorylation in the p38 pathway may indirectly promote migration (45). Moreover, TFF3 can activate the PI3K/AKT pathway (57). AKT stimulates metastasis through Twist, Snail, Slug, Zeb1, and Zeb2 (58,59). It was reported that TFF3 produces a migratory and invasive phenotype in human colon carcinoma cells which was dependent on the activity of the transcription factor signal transducer and activator of transcription 3 (STAT3) (60). What’s more, TFF1 stimulates the migration and invasion of human gastric carcinoma cells in a PI3K-dependent manner (63).

The inhibitory effect of TFF on migration has been rarely reported. MicroRNA-18a down-regulated by TFF1 results in reduced migration and invasion of gastric cancer cells (44). It was found that the overexpression of TFF1 can induce the increase expression of tumor suppressor gene scaffold protein membrane-associated guanylate kinase inverted-2 (MAGI-2) (45). This subsequently inhibits the migration and proliferation of human hepatoma cells through the tumor suppressor gene, PTEN (72). The overexpression of TFF1 can down-regulate the expression of protein tyrosine phosphatase receptor U (PTPRU) gene in glioma cells (46). PTPRU is required for the growth, migration, invasion and adhesion of glioma and gastric cancer cells (46,47).

Angiogenesis is a process necessary for tumor growth, invasion and metastasis. TFF3 plays a role in promoting angiogenesis, both in vivo and in vitro. TFF3 can promote angiogenesis of the chorioallantoic membrane and can induce the formation of microvascular structures (73). The methylation of the CpG island in the abnormal starting area may regulate the expression of TFF3. Liver cancer tissue may promote TFF3 expressing, thus, affecting angiogenesis and promoting the formation of the tumor (17). Nitric oxide (NO) is an important angiogenic factor in tumor angiogenesis, and is stimulated by TFF3 inducing NO synthetase. The occurrence of tumor angiogenesis in gastric cancer is always associated with the enhancement of TFF3 (25). TFF3 can also promote the generation of NO by combining with MUC2 (74). Some carcinogenic factors can induce cyclooxygenase-2 (COX-2) expression, increase the expression of vascular endothelial growth factor (VEGF), and promote tumor angiogenesis (61). Previous studies have found that TFF3 can activate the PI3K/AKT pathway (57). Angiogenesis is mediated by PI3K/AKT signaling through Hypoxia induced factor 1 alpha (HIF-1α) and the angiogenic factors ANG-2 (angiopoietin 2), plasminogen activator inhibitor type 1 (PAI-1),Thrombospondin1 (THBS1) and vascular endothelial growth factor (VEGF) (62).

There are few reports on the anti-angiogenic function of TFFs. It has been shown that TFF2 can suppress iNOS and NO to inhibit angiogenesis (48).

As an important cytokine in mucosal epithelium, TFF family plays an important role in gastrointestinal mucosal injury, repair, and malignancy. Clinical studies during the past few decades have found the abnormal expression of TFFs in many types of tumors; some related to the degree of tumor malignancy, and some might be involved in the occurrence and metastasis of tumors. It should be noted that TFFs may confer invasive potential and resistance to therapy, but their expression does not always result in a more aggressive cancer phenotype. Moreover, although most studies have shown that TFFs play a promotional role in tumors, the results of its anti-tumor effects should not be ignored. A large number of studies in vivo or in vitro demonstrated that TFFs bear the ability of promoting migration and anti-apoptosis of tumor cells, but a few other studies suggested the contrary. There were some contradictory reports and divergences on the role in promoting or suppressing tumor proliferation and growth. This might be due to different factors such as; tumor cell type and the specific microenvironment. Furthermore, TFFs’ impact also seems to be dependent on the system studied. Therefore, it needs to be clarified by further randomized controlled clinical studies and molecular biological mechanism studies to determine whether TFFs could act as a potential molecular marker or therapeutic target of a certain type of tumor.

We would like to acknowledge Sara EI-Sahli (Department of Biochemistry, Microbiology and Immunology, Faculty of Medicine, University of Ottawa, Canada) for critical reading and modification of the manuscript.