The incidence of oral cavity cancer has increased significantly among Asian males and females in the last few decades (1). The majority (>90%) of the oral tumors are squamous cell carcinomas, which are often not detected until the late stage of the disease (2). In addition, the 5-year survival rate for oral cancer is a dismal 50–65% due to dysplastic precancerous lesions and lymphatic metastasis (3). The aggressive nature of this malignancy and frequent metastasis calls for novel therapeutic and prognostic strategies. CD147 (Basigin, EMMPRIN), a cell surface glycoprotein, is highly expressed on the surface of malignant tumor cells, and promote their invasiveness and metastasis (4-6). Recent studies report CD147 overexpression in oral tumor tissues as well as the corresponding cell lines (7-9), with a direct role in the progression of oral squamous cell carcinoma (OSCC) (8). In addition, CD147 overexpression in OSCC tissues is associated with poor prognosis (9), indicating its potential as both a prognostic marker as well as a therapeutic target (10). Since studies have also implicated CD147 as a crucial regulator of glucose metabolism in cancer cells (11-13), we hypothesized that the oncogenic effects of CD147 are mediated via regulation of glycometabolism. To this end, we knocked down CD147 in human OSCC cell lines, and observed the effects on their in vitro migration, invasiveness and glycometabolism. Our findings provide new insights into the molecular mechanisms governing OSCC metastasis, and present CD147 as a novel prognostic marker and therapeutic target.

Three shRNAs targeting human CD147 were designed and synthesized, and the sequences were: CD147-shRNA1-5'-AATGA CAAAG GCAAG AACGT C-3', CD147-shRNA2-5'-CGTCG ATTTT TGTGA TGCTC GTCAG-3' and CD147-shRNA3-5'-GTACA AGATC ACTGA CTCT-3'. The control vector was pGLV3-GFP-puro. SCC-25 and CAL-27 cells were seeded in 6-well plates and after culturing till 60–80% confluency, transfected with 50, 100, 150 and 200 ng/mL CD147-shRNA or the control plasmid using Lipofectamine™ 2000 Transfection Reagent (11668019, Thermo Fisher Scientific, USA) according to the manufacturer’s instructions. The transfected cells were selected with 6 µg/mL puromycin (P8230, Solarbio Life Science, China) for 1 week and with 3 µg/mL for 2 weeks. The stable transfectants were then cloned by the limiting dilution method in 96 wells, and confirmed by RT-PCR and Western blotting. For PI3K overexpression, PI3K cDNA and control vectors were transfected into SCC-25 and CAL-27 cells as described above.

Cells were seeded in 6-well plates at the density of 5×105 cells/3 mL/well, and cultured in complete medium for 12 h. After replacing the old medium with fresh serum-free medium, the cells were grown for another 12 h, and the supernatants were collected. The glucose content was determined using Amplex™ Red Glucose/Glucose Oxidase Assay Kit (A22189, Thermo Fisher Scientific, USA), and lactate production using the Lactate Colorimetric/Fluorometric Assay Kit (K607, BioVision, USA) according to the manufacturers’ instructions. Absorbance was measured using GENios Plus Plate Reader (Tecan). All results were normalized on the basis of the total cellular protein content.

Stably transfected cells were dissociated using 1X non-enzymatic cell dissociation solution (13151014, Thermo Fisher Scientific, USA), and re-suspended in the suitable media containing 1% BSA (30036727, Thermo Fisher Scientific, USA). Equal number of cells were seeded in the upper Transwell chambers (Corning Costar) onto filters coated with 20 µg/mL fibronectin (Sigma). The lower chambers were filled with complete medium, and the cells were incubated for 6 h at 37 °C under 5% CO2. The cells remaining on the upper surface of the filters were gently scrubbed with a cotton swab, and the migrated cells on the lower surface were washed with PBS, fixed with 4% paraformaldehyde, and stained with crystal violet (0.5 g dye in 20 mL methanol and 80 mL dH2O). The stained cells were observed by light microscopy, and manually counted in 15 random fields per sample (5 filters per sample ×3 fields per filter).

Data was expressed as mean ± SEM (standard error of the mean) of three independent experiments. Multiple groups were compared by one-way analysis of variance (ANOVA) followed by the Dunnett test. P values <0.05 were considered statistically significant.

Silencing of CD147 expression in the OSCC lines

RT-PCR showed similar CD147 mRNA levels in the un-transfected and control vector-transfected OSCC cells, with significant decrease in cells transfected with CD147-shRNA1, CD147-shRNA2 and CD147-shRNA3. In addition, since CD147-shRNA3 blocked CD147 at both the mRNA and protein levels (Figure 1), it was selected for the subsequent experiments. 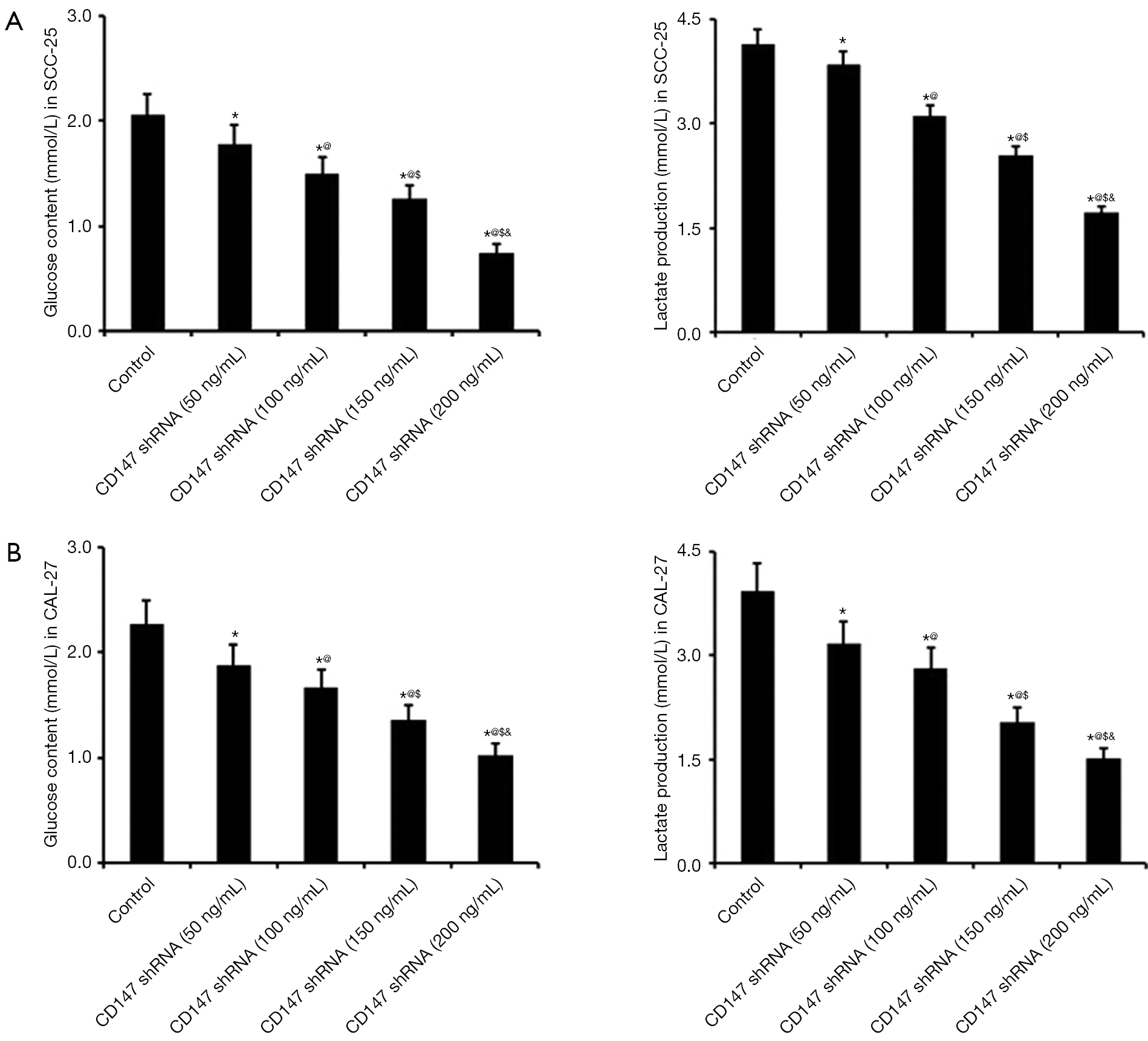 Metabolic reprogramming in cancer cells is regulated by numerous oncogenic signals, including the PI3K/AKT pathway, which mediate the increase in glucose uptake and glycolysis (14,15). Therefore, we also analyzed the effect of CD147 silencing on the key proteins of the PI3K/AKT pathway in SCC-25 and CAL-27 cells. The levels of both total and phosphorylated PI3K were decreased significantly in the CD147 knockdown cells in a dose-dependent manner (Figure 3). Activated PI3K binds to phosphorylated PDK1, thereby activating the downstream signaling molecule AKT (16,17). As shown in Figure 3, CD147 silencing down regulated both p-PDK1 and p-AKT in the SCC-25 and CAL-27 cells, indicating that CD147 regulates glucose metabolism in the OSCC cells via the PI3K/AKT pathway. 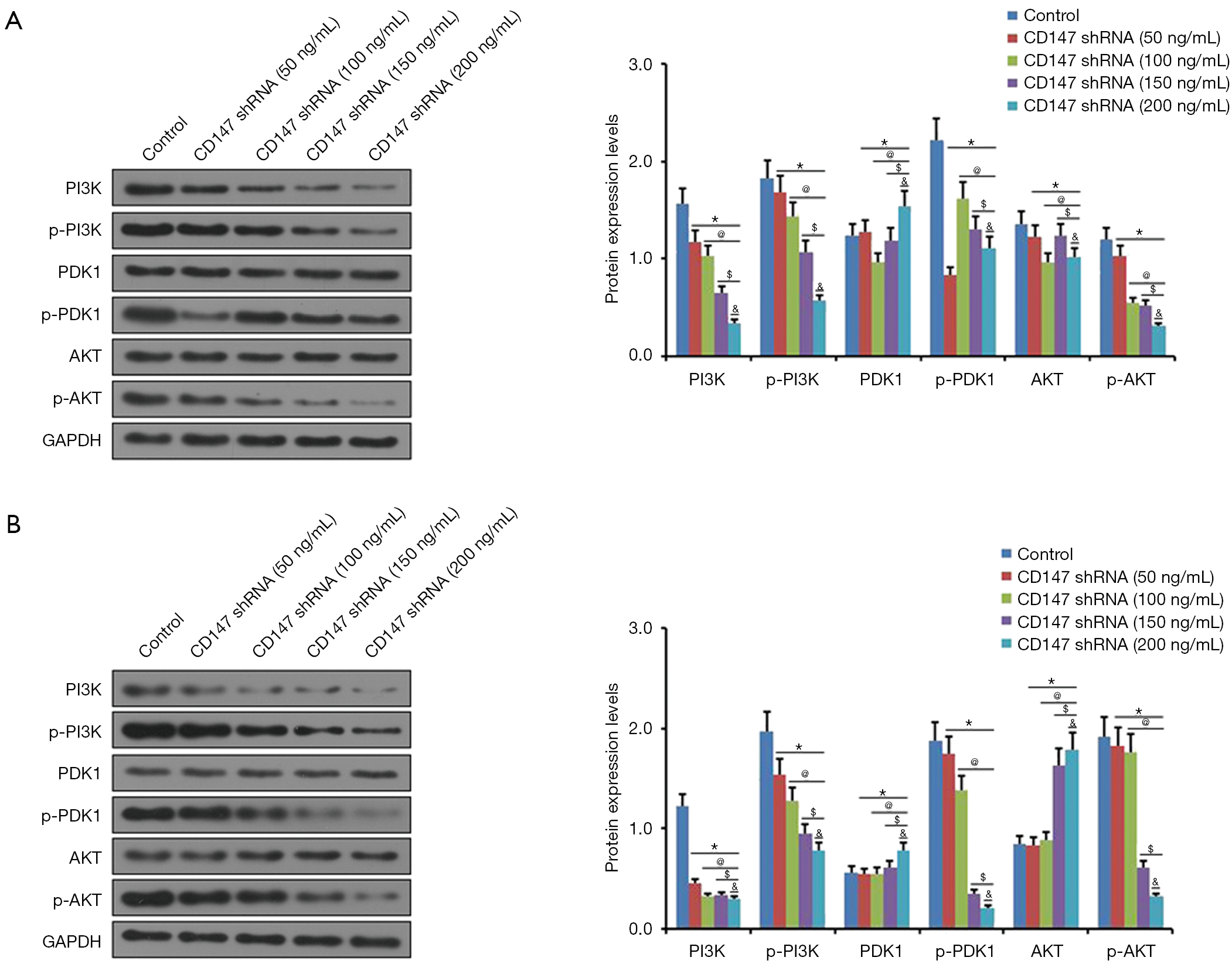 PI3K is the key factor regulating glucose metabolism in OSCC

To further validate the key role of PI3K in regulating glucose metabolism in OSCC cells, we over expressed PI3K in both wild-type and CD147 knockdown SCC-25/CAL-27 cells, and measured the glucose uptake and lactate secretion. Overexpression of PI3K resulted in more active glucose metabolism with significantly higher glucose uptake and lactate production compared to the control cells (Figure 4A). The glucose transporter-1 (GLUT-1) is often overexpressed in solid malignancies and increases glucose uptake in response to aerobic and anaerobic glycolysis (18,19). In addition, overexpression of GLUT-1 in OSCC is associated with poor prognosis (20-23). We found that PI3K overexpression significantly increased GLUT-1 levels in SCC-25 cells compared to the control cells, whereas knockdown of CD147 had the opposite effect. In addition, overexpression of PI3K reversed GLUT-1 inhibition following CD147 knockdown (Figure 4B), indicating a definite relationship between CD147 and PI3K in glucose metabolism. Likewise, CD147 knockdown significantly reduced glucose content and lactate production, as well as GLUT-1 levels in CAL-27 cells, all of which were restored by PI3K overexpression (Figure 4C,D). Taken together, CD147 regulates glucose metabolism in the OSCC cells via the PI3K/AKT pathway. 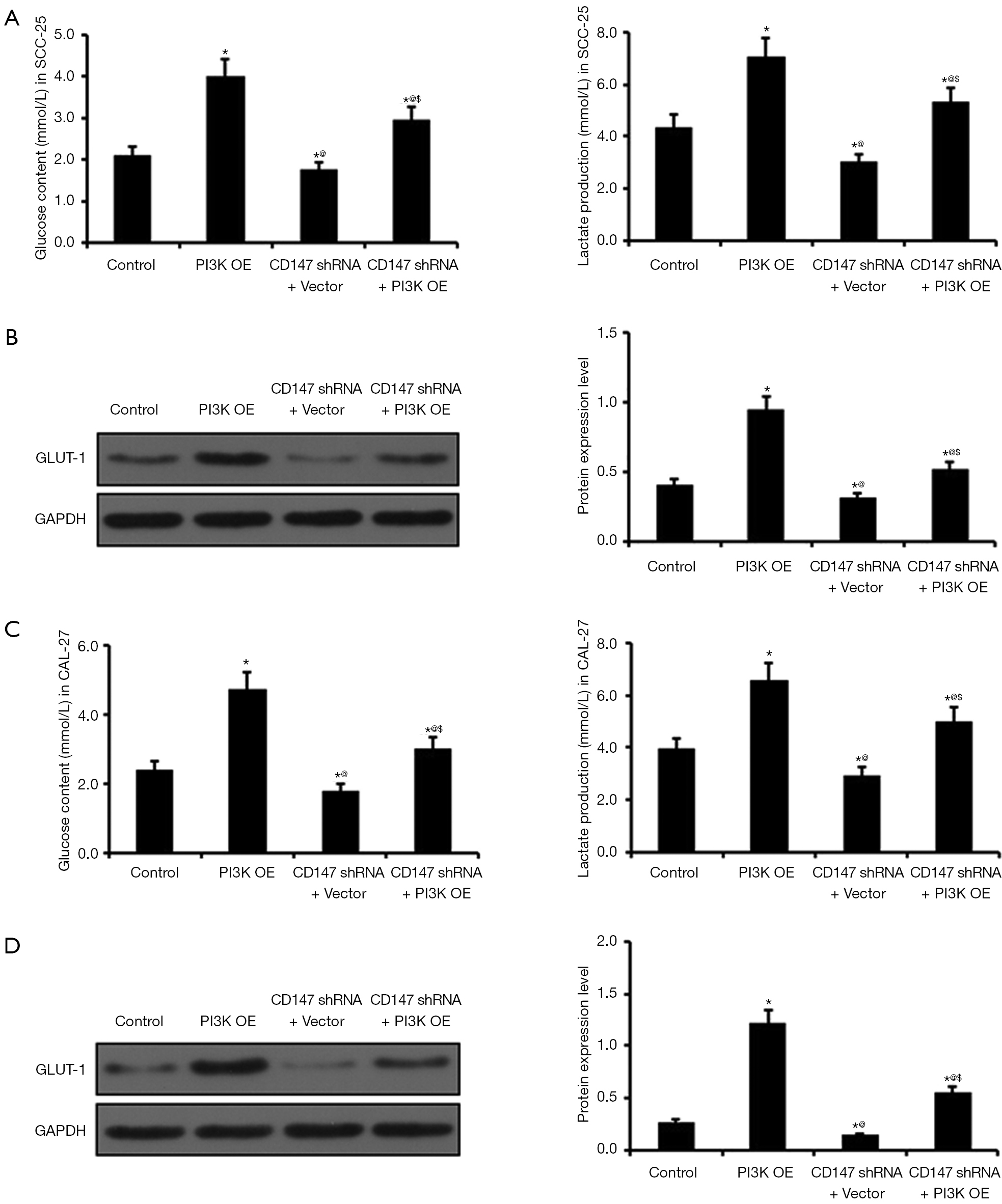 The invasiveness and distant metastasis of tumor cells are the major factors responsible for the high mortality rates of OSCC (24), and a pro-metastatic role of CD147 has been reported in previous studies (7,8,25,26). Silencing of CD147 significantly decreased the in vitro migration of OSCC cells in a dose-dependent manner (Figures 5,6). In addition, overexpressing PI3K increased cell migration, which was significantly inhibited upon simultaneously blocking CD147 (Figure 7). Therefore, CD147 facilitated invasion and metastasis of OSCC cells via the PI3K/AKT pathway. 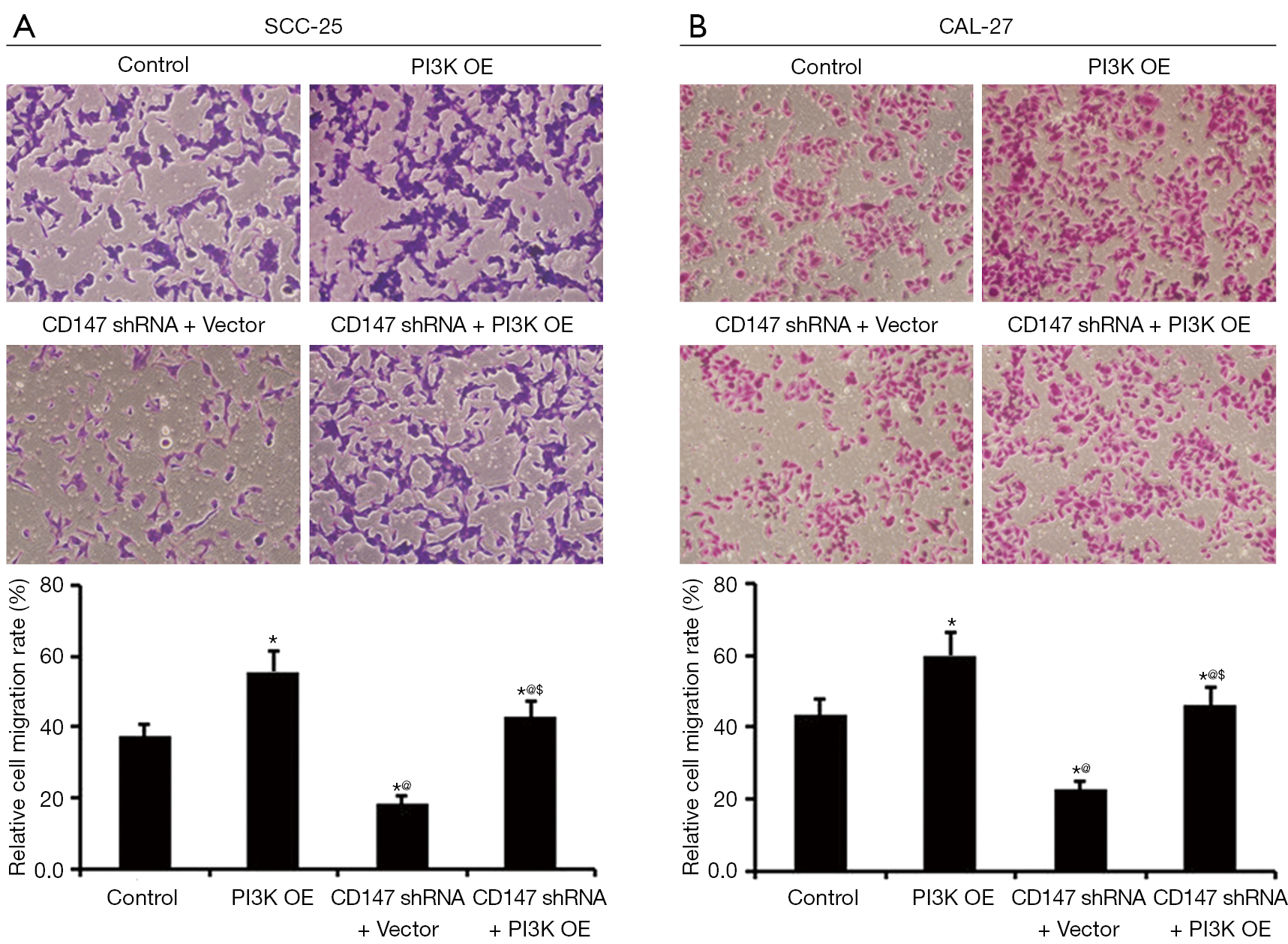 We report for the first time the pivotal role of CD147 in regulating glucose metabolism and migration in human OSCC cells, and identify PI3K as the key functional protein. CD147 knockdown not only decreased glucose uptake and lactate secretion, but also the migration of the OSCC cells in an shRNA dose-dependent manner. In addition, CD147 silencing in the PI3K-overexpressing cells abrogated the metabolic advantage provided by PI3K, indicating that the oncogenic functions of CD147 are mainly mediated by the PI3K/AKT pathway. Oral tumors are often discovered at an advanced stage (27,28) due to dysplastic precancerous lesions (29) and lymphatic metastasis (30-32). Therefore, metastasis is a rational therapeutic target for oral cancer (31,33). CD147, originally isolated from the plasma membranes of malignant tumor cells (34,35), is an important modulator of the anchorage-independent growth and invasiveness of tumor cells (36,37). However, the mechanistic role of CD147 in oral cancer, especially squamous cell carcinoma, is largely ambiguous. In the current study, we showed that the CD147/PI3K/AKT axis is a pro-metastatic factor, which is in accordance with a proteomics analysis on OSCC cells that positively associated CD147 with metastasis (38), and other studies that showed CD147 promoted tumorigenesis and invasion in oral cancers via degradation of the extracellular matrix (39,40). A major hallmark of cancer is metabolic reprogramming (8). Due to their higher biosynthesis rates, proliferation and migration, tumor cells require more energy compared to normal cells. Not surprisingly therefore, tumor cells often overexpress GLUT-1 for increased glucose uptake and metabolism (41). In addition, glucose metabolism is closely associated with the hypoxia inducible factor (HIF), chemokine receptor CXCR4 and monocarp boxy late transporters MCT1 and MCT4, which play important roles in tumor invasion and metastasis (42-45). We found that the transmembrane glycoprotein CD147 regulated glucose utilization and metabolism in OSCC cells by activating the PI3K/Akt pathway, which is consistent with previous reports. Research also suggested that that hypoxia-induced CD147 promoted glycolysis by upregulating HIF and SP1 in epithelial carcinoma cells (46). In addition, CD147 also promoted glucose metabolism in HCC cells by inhibiting the p53-dependent signaling pathway (13). In conclusion, we demonstrated that blocking CD147 in human OSCC cells resulted in inhibition of glucose metabolism, with lower glucose uptake and lactate secretion compared to the normal cells. Furthermore, silencing of CD147 significantly decreased OSCC cell migration in a dose-dependent manner. Mechanistically, CD147 regulated both migration and glycometabolism via the PI3K/AKT pathway. Our findings provide new insights into the molecular mechanisms governing metastasis in oral cancers, and identify CD147 as a novel prognostic marker and therapeutic target for OSCC.

Funding: The present investigation was supported by grants from National Natural Science Foundation of China grants (No. 81502357); Medical Science and Technology Project of Zhejiang Province (No. 2016KYB316, and No. 2016KYA183).

Ethical Statement: The authors are accountable for all aspects of the work in ensuring that questions related to the accuracy or integrity of any part of the work are appropriately investigated and resolved. This study only involved cell experiments, not clinical or animal experiments, thus ethics approval and informed consent are not required.