Tumor metastasis is the primary cause of mortality in patients with hypopharyngeal squamous cell carcinoma (HSCC) (1,2). However, despite advances in diagnostic methods and treatments, the five-year survival rate remains only at 25–40% (3), and once distant metastasis occurs, the prognoses and the survival rates of HSCC patients remain unsatisfactory (4). Therefore, a better understanding of the molecular mechanisms driving HSCC metastasis is urgently needed.

CDH1 is the prototypical member of the classical cadherin family that mediates cell–cell adhesion. Loss of CDH1 indirectly regulates gene transcription by causing the translocation of β-catenin to the nucleus (5). CDH1 loss, the hallmark of epithelial to mesenchymal transition, is a prerequisite for subsequent tumor invasion and metastasis (6,7), but the specific mechanism of CDH1 in HSCC metastasis has not been fully elucidated.

Matrix metalloproteinase (MMP)-9 is a member of the MMP family and functions as a Zn2+-dependent endopeptidase, which plays a pivotal role in tumor dissemination and invasiveness (8,9). The over-expression of MMP-9 facilitates metastasis and tumor progression by degrading the extracellular matrix (ECM), which allows tumor cells to migrate and colonize host tissues (10). MMP-9 is associated with cell growth and metastasis in several neoplasms (11-13). Importantly, the enhanced expression of MMP-9 acts the progression of head and neck squamous cell carcinoma (14). In addition, increased expression of MMP-9 is tightly linked to lymph node metastasis of laryngeal cancer (15).

Loss of CDH1 leads to the upregulation of epidermal growth factor receptor (EGFR) in head and neck cancer and in non-small cell lung cancer cells (16,17). In addition, EGFR, which is one of the receptor tyrosine kinases, can phosphorylate signal transducer and activate transcription 3 (STAT3). Once activated, STAT3 modulates the transcription of a range of targeted genes such as MMP-9, thereby inﬂuencing the proliferation, migration, and invasion of tumor cells (18,19). MMP-9 cleaves CDH1 at the cell surface, and the resulting soluble form of CDH1 promotes tumor invasion (20). However, the precise mechanism by which the downregulation of CDH1 contributes to MMP-9 upregulation remains largely unknown. In this study, we demonstrate that loss of CDH1 is closely associated with postoperative lung metastasis and is accompanied by MMP-9 upregulation. Furthermore, CDH1 enhances MMP-9 expression via STAT3 activation, which subsequently facilitates cell proliferation, invasion, and metastasis of HSCC. Therefore, our research highlights the important role of CDH1 in HSCC metastasis and might provide potential therapeutic targets for HSCC therapy.

Paired tumor and adjacent normal tissue samples were obtained from 109 patients who were undergoing radical surgery without pre-operative adjuvant treatment and who were pathologically and/or cytologically diagnosed with HSCC in Shandong Provincial Hospital affiliated to Shandong University between 2010 and 2014. The 109 enrolled patients consisted of 31 post-operative lung metastases cases, whereas the remaining 78 cases did not have lung metastases. After receiving approval from the Shandong Provincial Hospital affiliated to Shandong University Ethical Committee (No. 2017018) and signing of informed consent by patients, samples were collected and used in subsequent assays.

Human FaDu cell line was originally obtained from the American Type Culture Collection and was routinely tested for mycoplasma infection prior to the initiation of the experiments. The cell line was cultured in DMEM/F12 (Gibco, C11330500BT) supplemented with 10% fetal bovine serum (Ausbian, VS500T) and was maintained in a monolayer culture at 37 °C in a humidified atmosphere composed of 5% CO2 and 95% air.

FaDu cells were transfected with siRNA in six-well plates for 24 h and further reseeded in 96-well plates with 5,000 cells/well for 48 h. Cell viability was assessed using the SRB assay as described previously (23).

FaDu cells were transfected with siRNA for 48 h and reseeded in trans-well chambers consisting of inserts with 8 µm-pores. After further incubation for 24 h, the cell migration assay was performed as described previously (24).

The metastatic ability of the cells was evaluated by performing invasion assay in the trans-well chambers mentioned above coated with Matrigel following the manufacturer’s protocol (Corning Incorporated).

Statistical analyses were performed using SPSS 17.0. The Mann-Whitney U-test was used to compare CDH1 and MMP-9 expression in the tumor tissues to expression in the paired adjacent normal tissues. The association between CDH1 expression and lung metastases was analyzed using Spearman’s rank correlation coefficients. Western blot, cell proliferation, migration, and invasion assays were analyzed by Student’s t-test. Statistical significance was deemed at P<0.05. 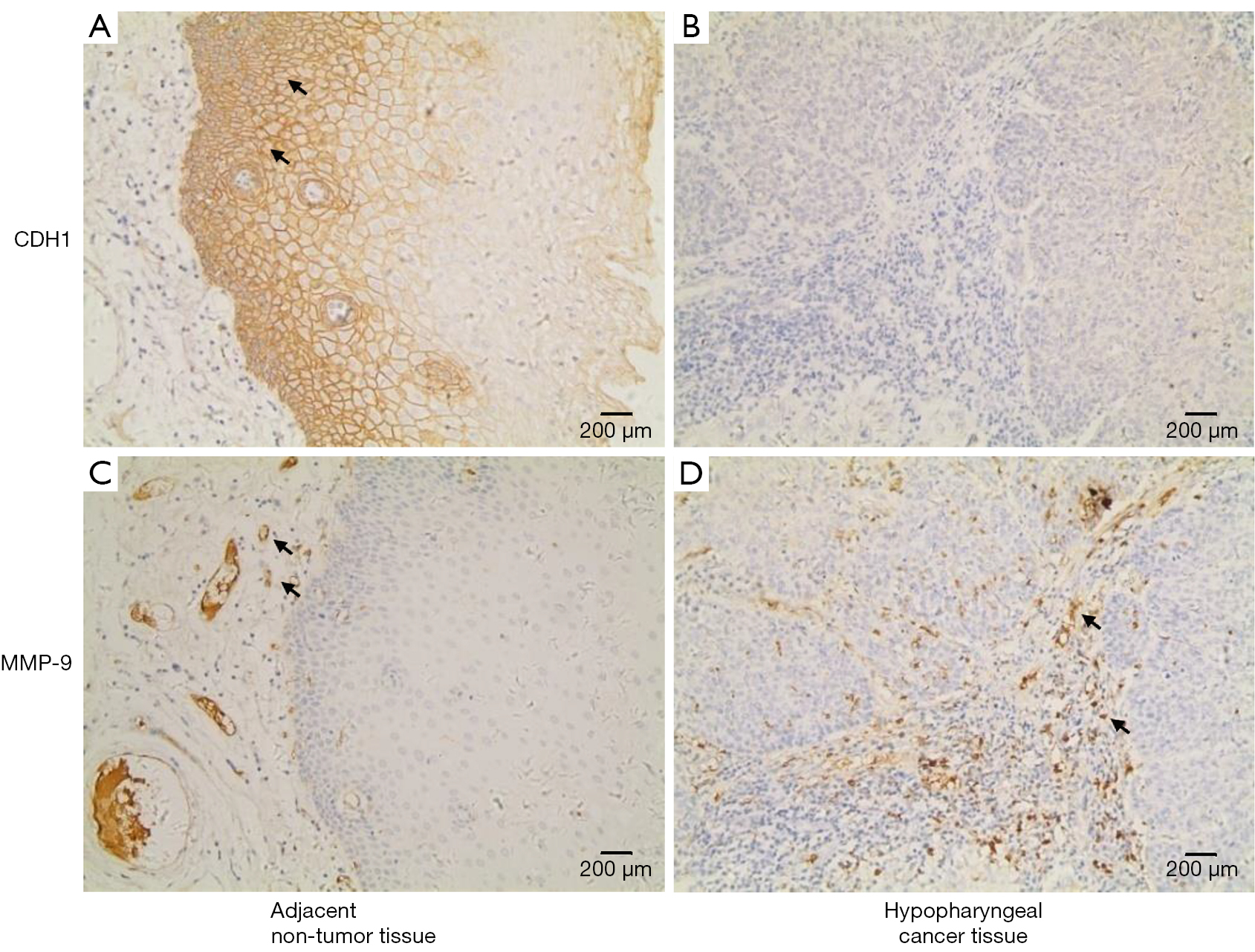 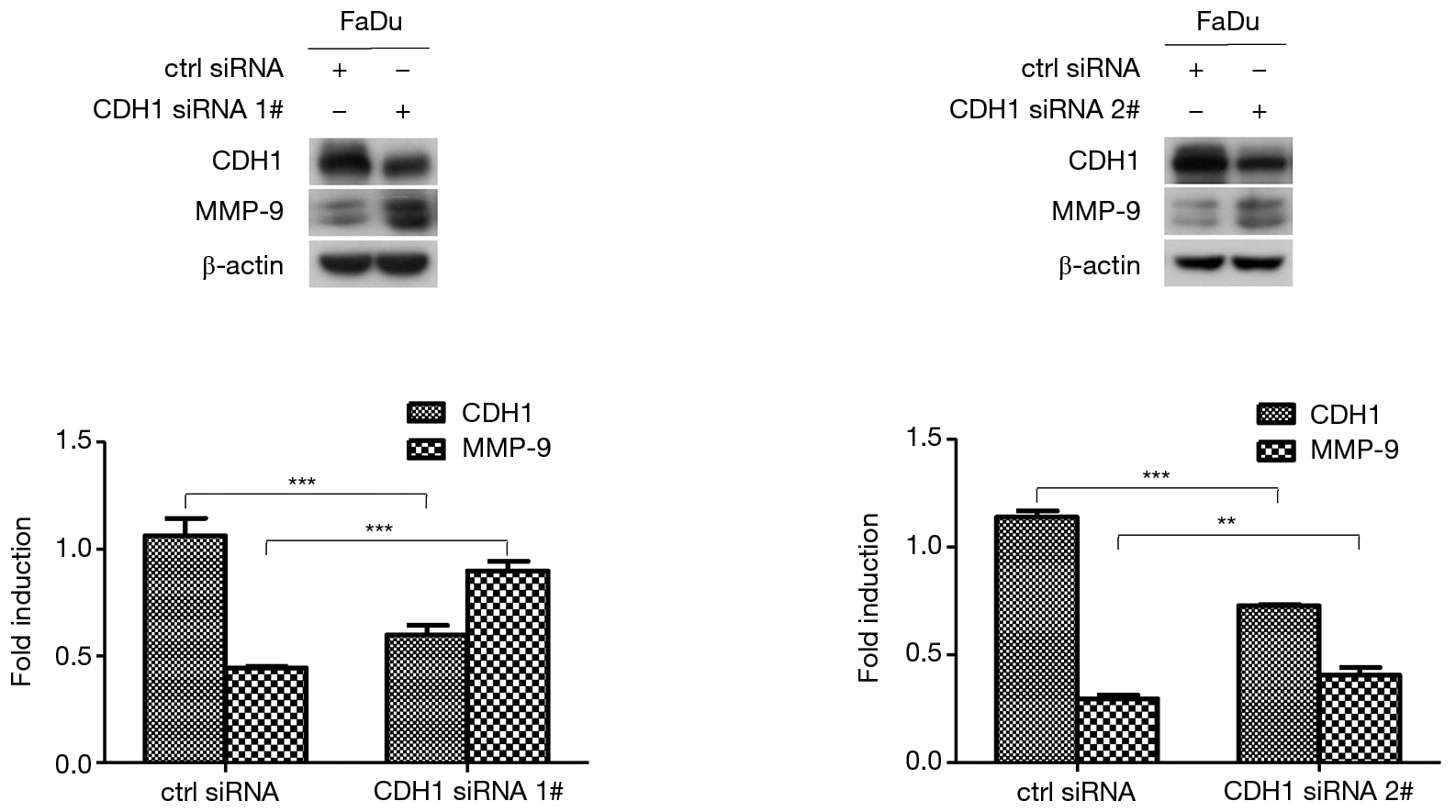 Considering that p-STAT3 contributes to MMP-9 expression (18), we further explored the effect of CDH1 depletion on the activation of STAT3. Depletion of CDH1 elicited a significant increase in p-STAT3 (Figure 4A,B). To determine whether p-STAT3 acts in MMP-9 up-regulation when CDH1 is depleted in FaDu cells, we inhibited STAT3 and CDH1 expression by siRNA transfection and found that blocking STAT3 attenuated the induction of MMP-9 caused by CDH1 depletion (Figure 4C,D). In parallel, we treated CDH1-siRNA-transfected FaDu cells with AG490 to suppress STAT3 activation and found that the pharmacological inhibition of STAT3 also prevented the induction of MMP-9 triggered by CDH1 loss (Figure 4E), which was consistent with the results of the co-transfection assay. Hence, the suppression of CDH1 leads to MMP-9 upregulation via increased phosphorylation of STAT3.

Our data showed that loss of CDH1 might contribute to tumor progression and metastasis by altering STAT3 and MMP-9 levels. To determine the roles of CDH1, STAT3, and MMP-9 in HSCC cells, a cell proliferation assay was conducted in FaDu cells. As shown in Figure 5A,B, the growth and proliferation of FaDu cells treated with CDH1 siRNA were enhanced, whereas an obvious decline was observed in the cells transfected with STAT3 or MMP-9 siRNAs. Moreover, additional knockdown of STAT3 or MMP-9 weakened the enhanced cell growth and proliferation induced by CDH1 depletion (Figure 5A,B). In addition, the metastatic potential was determined using a cell migration and invasion assay. In comparison with the control cells, knockdown of CDH1 significantly enhanced the motility of FaDu cells, whereas the migration of FaDu cells was greatly decreased when treated with STAT3 or MMP-9 siRNA. Furthermore, increased migration was observed in the CDH1-depleted cells compared with the cells co-transfected with CDH1 siRNA and either STAT3 or MMP-9 siRNA (Figure 6A,B). Finally, cell invasiveness was measured using Matrigel-coated chambers, and these results were consistent with the cell migration assay (Figure 6C,D). Hence, CDH1 depletion facilitates the proliferation, migration, and invasiveness of FaDu cells, which is accompanied by the phosphorylation of STAT3 and upregulation of MMP-9. 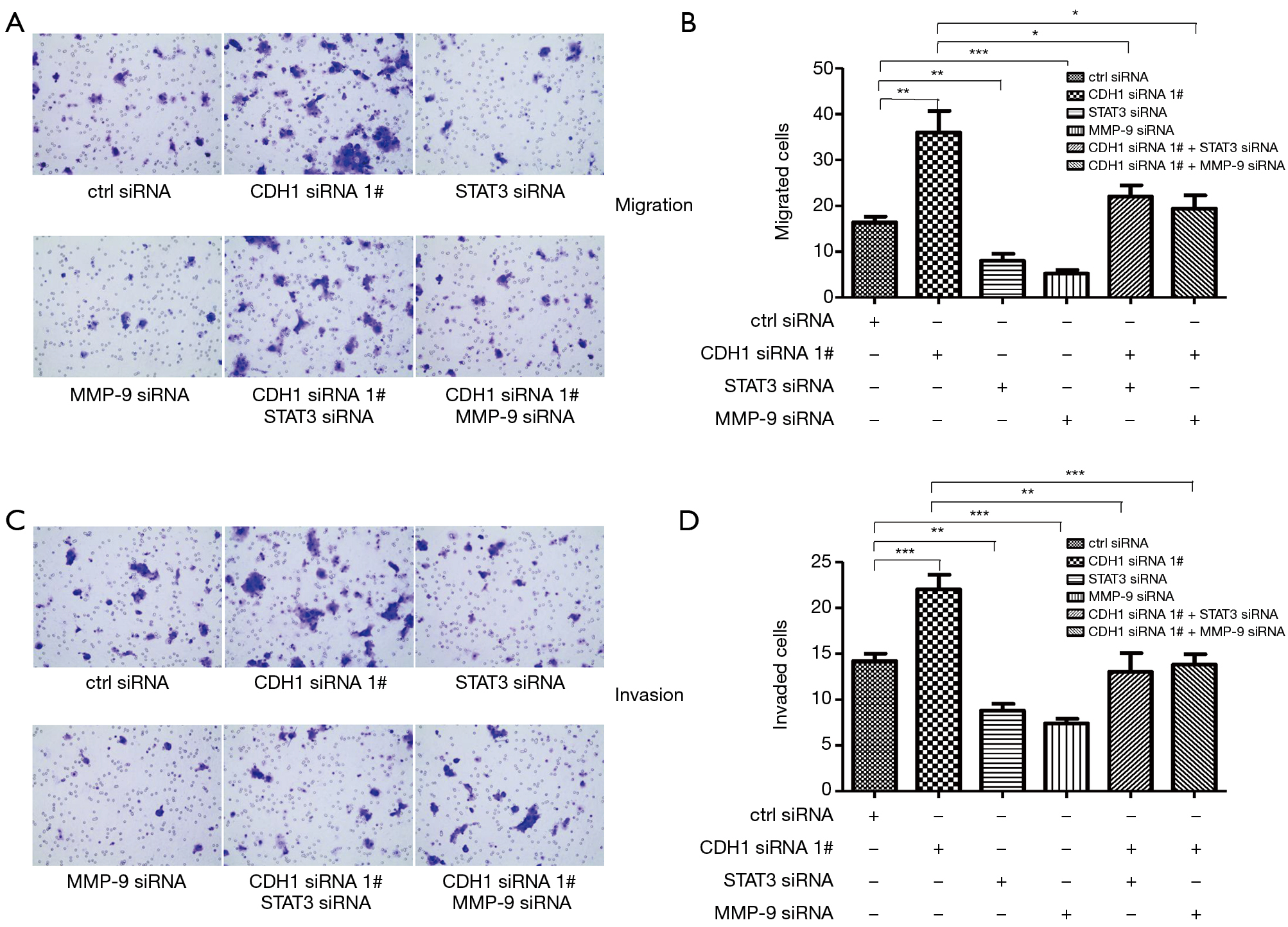 Figure 6 STAT3 and MMP-9 contribute to the increased migration and invasion induced by CDH1 suppression. (A) After transfecting with different combinations of CDH1, STAT3, and MMP-9 siRNAs for 48 h, FaDu cells were cultured in transwell chambers for another 24 h, migrated cells were stained with crystal violet for 15 minutes in migration assay. (B) Quantitative analysis of migrated FaDu cells. (C) FaDu cells were transfected with the same siRNAs as in (A) and re-cultured in transwell chambers coated with a 1:3 dilution of Matrigel for another 36 h, invaded cells were stained with crystal violet for 15 minutes in invasion assay. (D) Quantitative analysis of invaded FaDu cells. Images of the migrated (A) and invaded (C) cells were obtained under a light microscope. Magnification, 20×. Each assay was performed thrice in independent experiments (mean ± SEM, n=5. ***, P<0.001; **, P<0.01; *, P<0.05).

HSCC has the poorest outcome among the malignant head and neck tumors, and once patients present lung metastasis, the average time from diagnosis to death is only approximately 5 months (3,25). Thus, understanding the molecular mechanisms involved in HSCC metastasis is important. Loss of CDH1 triggers active signals that support invasion and metastasis in various epithelial tumors (6), implying that it might also play an important role in HSCC lung metastases; Berx and Birchmeier et al. reported that loss of CDH1 is functionally correlated with increased incidence of metastasis (6,26). Here, we show that CDH1 downregulation is associated with HSCC lung metastases. Moreover, loss of CDH1 upregulates MMP-9 by phosphorylating STAT3 and thus contributes to the proliferation, migration, and invasiveness of FaDu cells, which might be responsible for lung metastasis and serve as an indicator for HSCC lung metastasis in clinical treatment.

Proteolytic enzymes, such as MMP-9, degrade various structural components of the ECM, thus facilitating tumor invasion into surrounding connective tissues (27). The over-expression of MMP-9 indicates metastatic potential in head and neck squamous carcinomas (28). In the present investigation, we found that reduced expression of CDH1 was concomitant with increased expression of MMP-9 in the same HSCC tissue sample. In addition, loss of CDH1 activates EGFR, which in turn phosphorylates STAT3 (16,29). Activated STAT3 upregulates the transcription of MMP-9 (18). Hence, the reduction of CDH1 affects the expression of MMP-9 through p-STAT3 in HSCC. In this study, we used two CDH1 siRNAs to transfect the FaDu cells and then measured the level of MMP-9 in FaDu cells. Our data showed that CDH1 inhibition upregulated the level of p-STAT3 and MMP-9 in FaDu cells, and silencing STAT3 attenuated the induction of MMP-9 caused by the suppression of CDH1, which indicates that CDH1 downregulation promotes MMP-9 expression in a p-STAT3-dependent manner.

Excessive cell proliferation, migration, and invasion are positively correlated with tumorigenesis and progression. Our work shows that depleting CDH1 significantly enhanced cell growth, proliferation, and invasiveness compared with the control, and silencing STAT3 and MMP-9 prevented the increased proliferation in CDH1-silenced FaDu cells. In addition, suppression of STAT3 and MMP-9 impaired the cell migration and invasion capacity caused by the loss of CDH1 in HSCC cells. Thus, the reduction of CDH1 plays a vital functional role in HSCC progression by upregulating MMP-9 via p-STAT3, hinting that p-STAT3 and MMP-9 might serve as crucial targets for the clinical treatment of HSCC.

In summary, we showed that CDH1 is a powerful indicator for HSCC lung metastasis, loss of CDH1 elevates MMP-9 expression by activating STAT3. Subsequently, the proliferative, invasive, and metastatic capacity of FaDu cells are promoted, which might contribute to the malignant development and lung metastases of HSCC. Taken together, our study might provide novel therapeutic targets for metastatic HSCC and introduce new avenues for the further development of clinical treatments.

Ethical Statement: The study was approved by the Shandong Provincial Hospital Affiliated to Shandong University Ethical Committee (No. 2017018) and all patients signed informed consent. The authors are accountable for all aspects of the work in ensuring that questions related to the accuracy or integrity of any part of the work are appropriately investigated and resolved.