Platelet-related indicators include platelet count (PLT), plateletcrit (PCT), mean platelet volume (MPV), platelet distribution width (PDW), and platelet to lymphocyte ratio (PLR). Some reports have confirmed that platelets act in a positive role for tumor angiogenesis and metastatic dissemination (6,7). In recent reports, platelet-related indicators have been connected with the prognosis of some tumors, such as rectal cancer and pancreatic cancer (8,9). It has been confirmed that platelet contributes to breast cancer progression via cellular transformation, proliferation, or angiogenesis, and high PLT has been associated with poor prognosis of breast cancer (10). Platelet-related indicators representing the size, number, status, and activity of platelets were also proven to be related to a variety of tumors (6). PCT value, which is obtained by multiplying PLT by MPV, provides platelet activation and displays platelet status (11). MPV, an indicator representing platelet activation and the quantity of the average size of platelets, is related to poor prognosis of some malignant tumors (8,12,13). PDW describes the average change in platelet volume, and an elevated PLT will influence the value of PDW (14). PLR, which is obtained by dividing the PLT by the number of lymphocytes, is also associated with poor prognosis in breast cancer patients (15).

In this present study, we investigated whether platelet-related indicators could provide potential significant prognostic information for ABC patients.

The study investigated the ABC patients that had been treated in the First Affiliated Hospital of Soochow University (Jiangsu, China) between November 2007 and July 2016. As a retrospective investigation, this study was approved by the Medical Ethics Committees of the First Affiliated Hospital of Soochow University. All the patients selected in the study had their clinical and pathological records inspected regularly. The inclusion criteria were as follows: (I) those with histologically or cytologically confirmed unresectable locally advanced or metastatic breast cancer; (II) age 18–70 years; (III) Karnofsky performance status score of ≥70; (IV) those with a predicted survival of ≥6 months; (V) those with either naive to anti-tumor treatment or with a postoperative adjuvant chemotherapy being performed ≥6 months after the last dose of chemotherapy; and (VI) those who met the laboratory criteria of white blood cell counts (WBCs) ≥3.5×109/L, absolute NE count ≥1.8×109/L, and PLT ≥100×109/L. Clinical and pathological records of all the patients participating in the study were reviewed periodically, the first follow-up was 3 months following adjuvant chemotherapy, and the last follow-up was conducted in July 2018.

Response for treatment of patients was assessed every 2 months by computed tomography (CT), and the related results were evaluated according to the Response Evaluation Criteria in Solid Tumors (RECIST) 1.1 (16).

All statistical analyses were performed using SPSS 19.0 software (Chicago, IL, USA). The associations between blood parameter status and clinicopathologic features or chemotherapeutic efficacy were explored and assessed by the χ2 tests. For analysis of survival data, Kaplan-Meier curves were constructed, and statistical analysis was carried out using the log-rank test. A multivariate logistic regression model was employed to identify the independent risk factors associated with breast cancer. Numerical data are presented as the mean ± standard error. All values of P<0.05 were considered statistically significant. 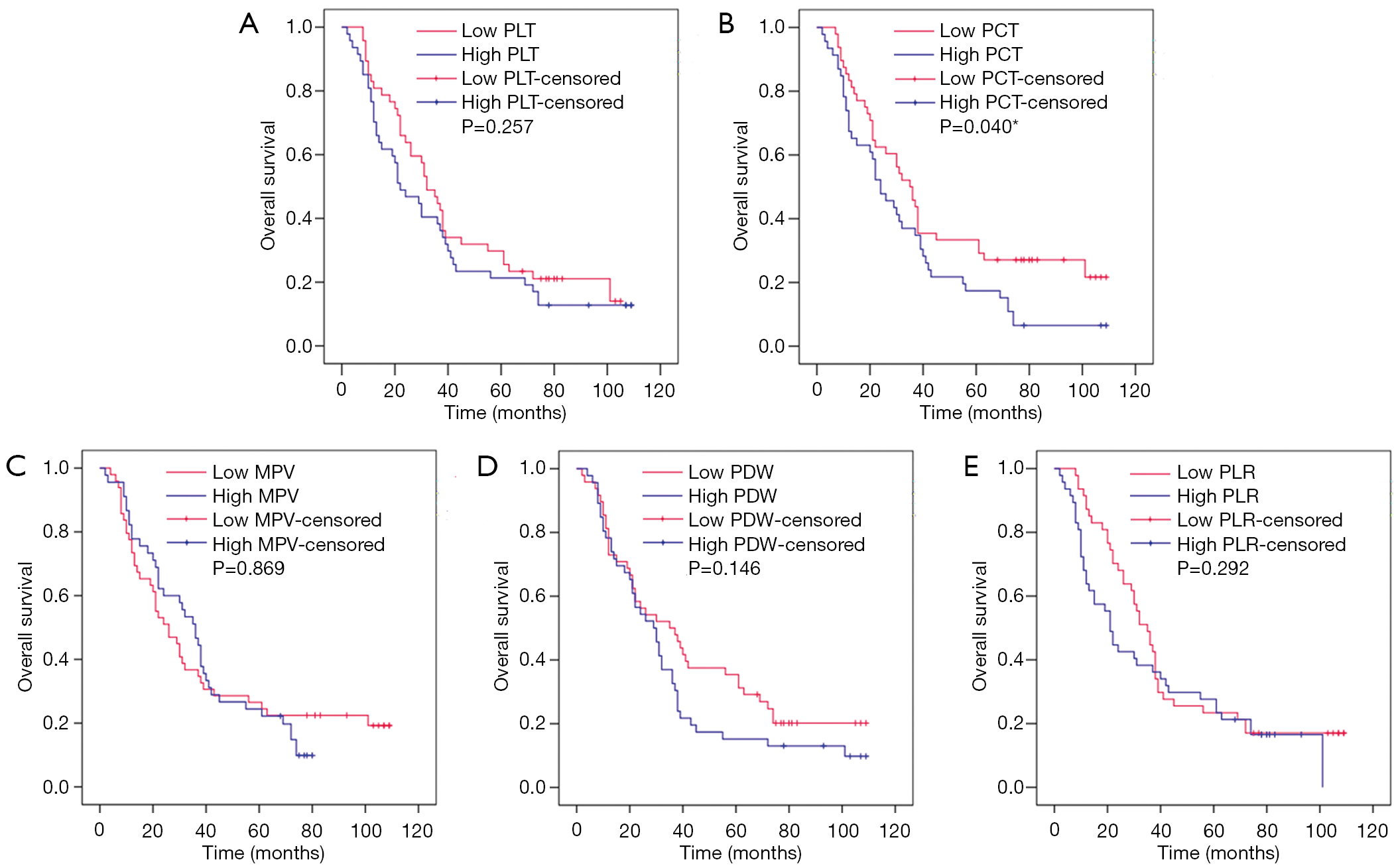 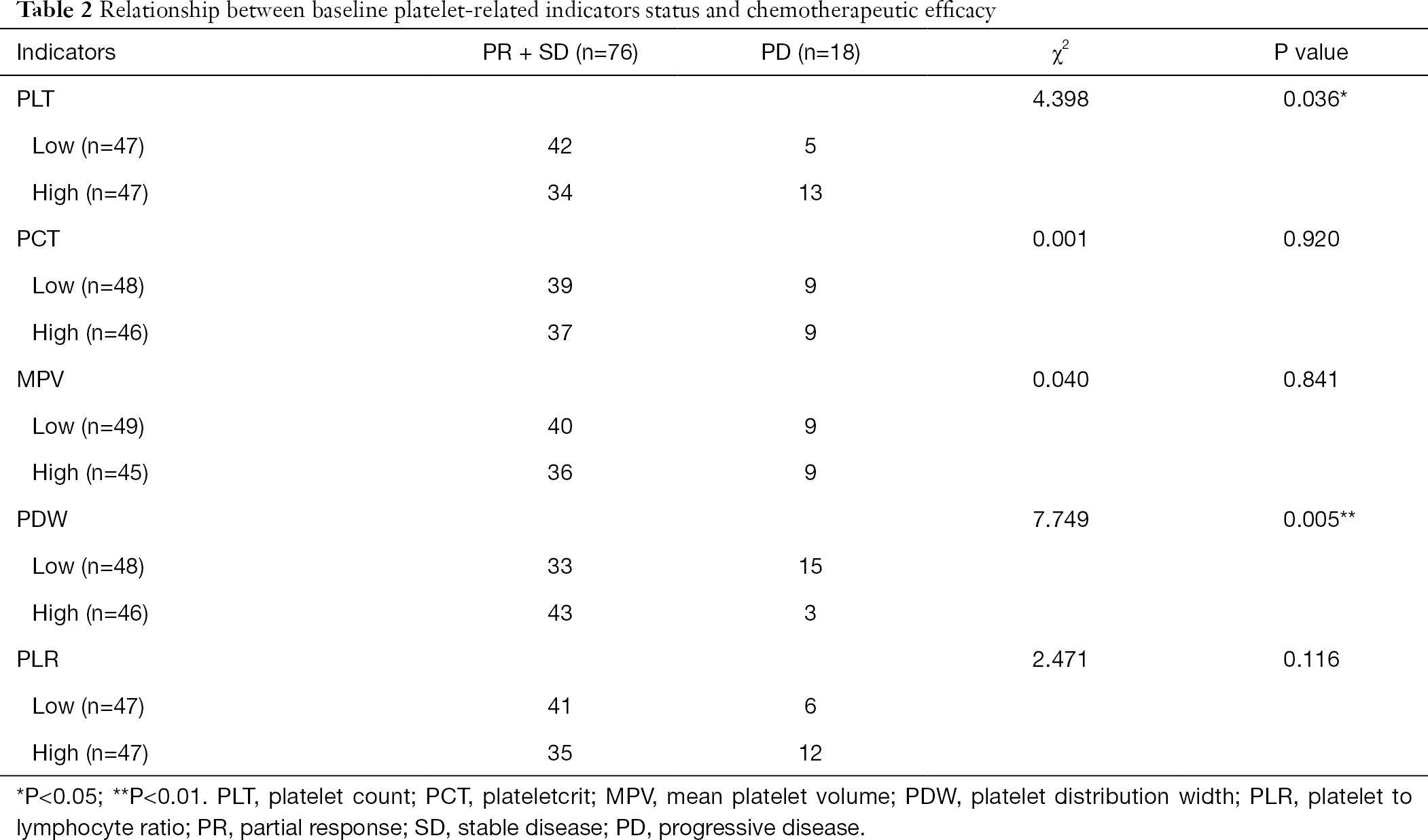 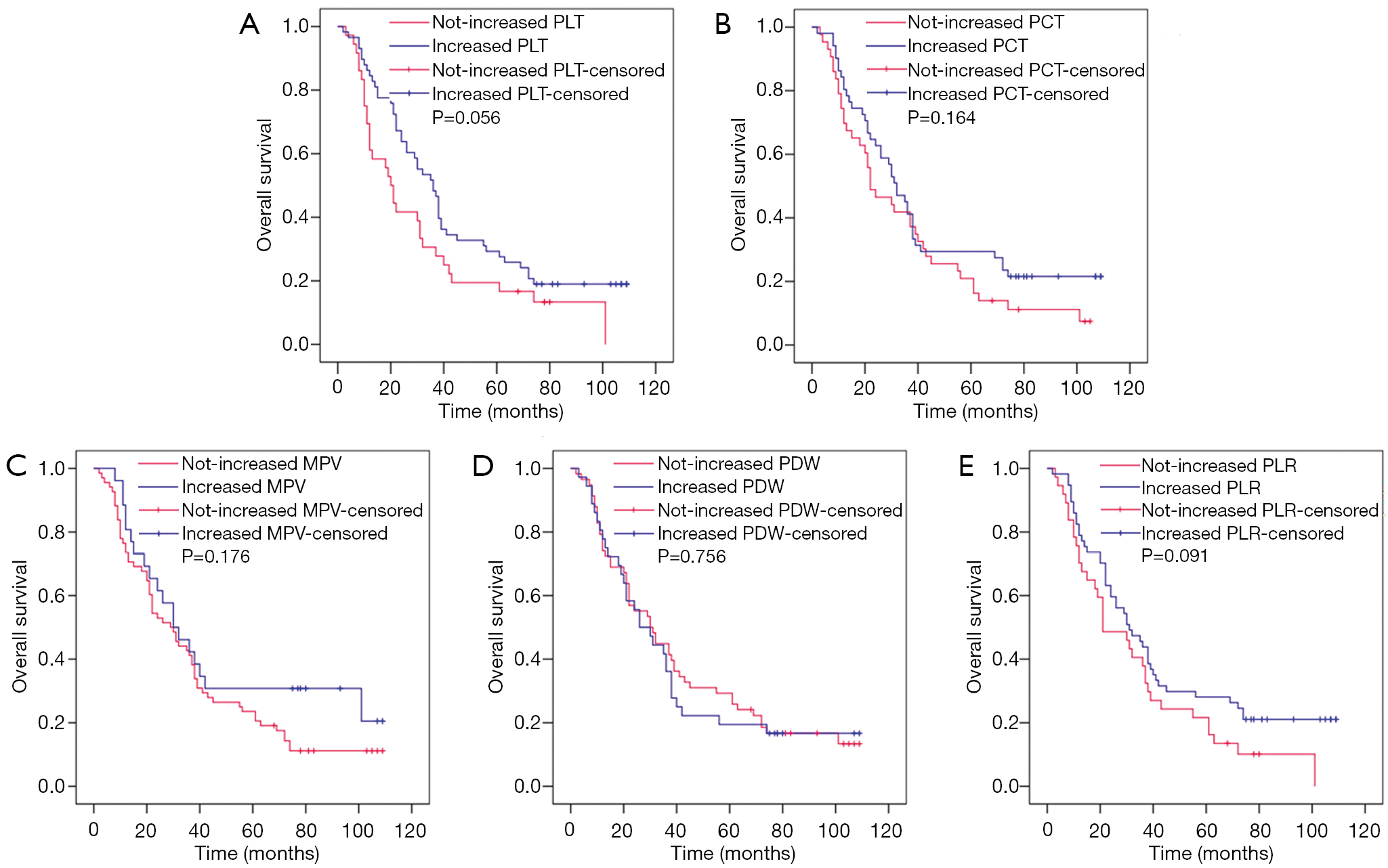 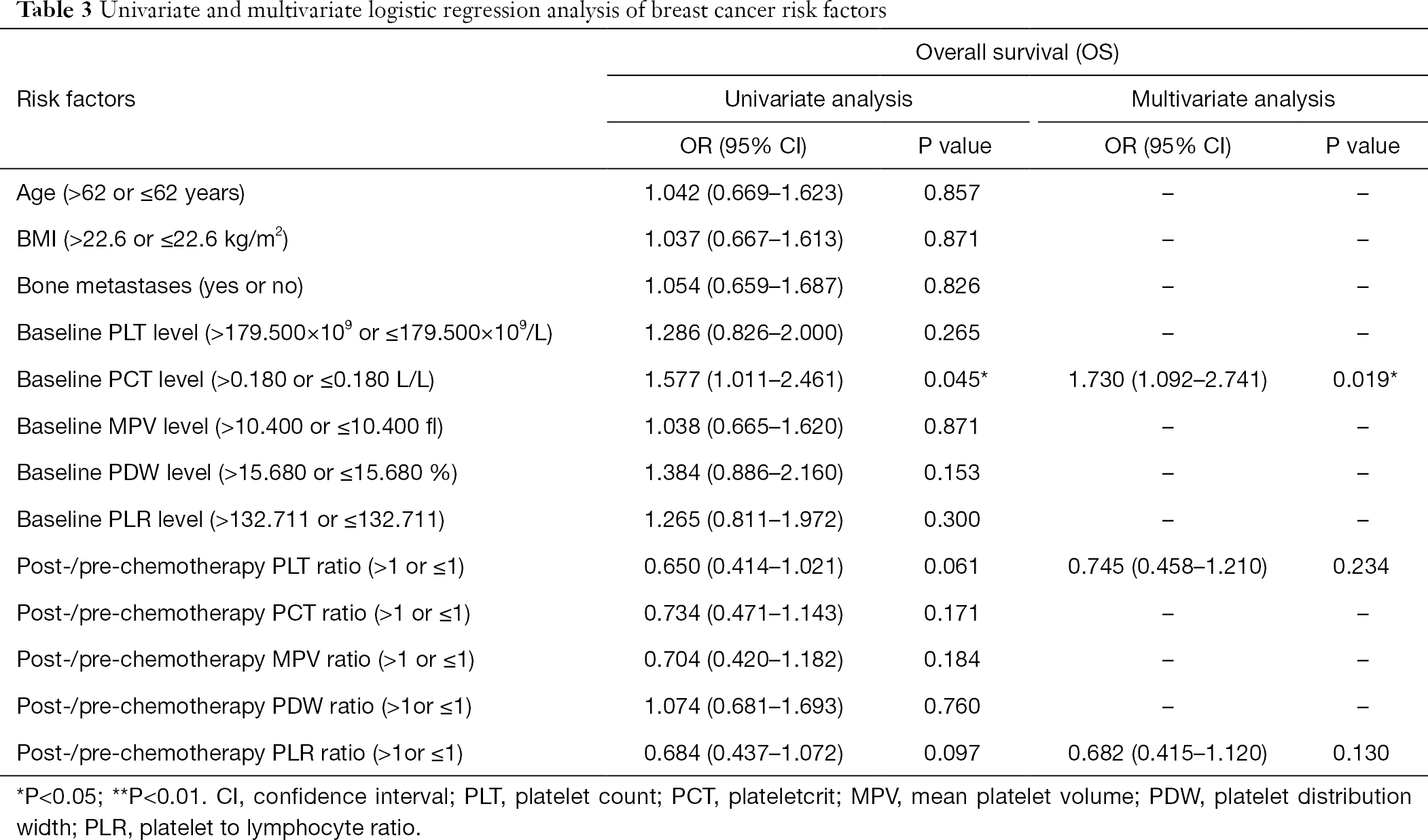 Platelets have a crucial role in the progression and metastasis of cancer (6). Platelet-related indicators, such as PLT, PCT, MPV, PDW, and PLR, are associated with the prognosis of cancers according to many recent studies.

The majority of research so far has confirmed that PLT is a potential negative prognostic marker for colorectal cancer, endometrial cancer, and other diseases (8,17). Recent reports have verified that, apart from their action in regulating in hemostasis, and host immune and inflammatory responses, platelets have a role in cancer metastasis and angiogenesis. For example, platelets promote tumor angiogenesis through several biological factors, such as vascular endothelial growth factor (VEGF), serotonin, and endostatin (18,19). Also, platelets are a primary source of TGFβ1, which leads to cancer invasion and metastasis via promoting epithelial-mesenchymal transition (EMT) in cancer cells (20). Additionally, platelets adhere to cancer cells via P-selectin, which presents on the surface of platelets binding to CD24 ligand, thereby avoiding natural killer (NK) cell-mediated cytotoxicity and facilitating tumor growth (21,22). Furthermore, activated platelets release lysophosphatidic acid (LPA) and platelet factor 4 (PF4), which were both shown to play a role in tumor cell growth, migration, and invasion (23). In our present study, lower baseline PLT level was associated with better chemotherapeutic efficacy in breast cancer patients.

PCT value, which is obtained by multiplying PLT and MPV, is also associated with platelet activation and displays platelet status (11). The value of PCT varies between patients and healthy subjects of various types of cancer (24,25). Ma et al. determined that the value of PCT is higher in patients with epithelial ovarian cancer when compared to the healthy controls (24). However, Oncel et al. found that the value of PCT was lower in the patient group with lung cancer in comparison with the control group (25). Moreover, it has been established that the value of PCT in lung cancer patients with distant metastasis is higher than those without distant metastasis (25). In another recent study, elevated PCT level was shown to have a relationship with worse prognosis in pancreatic cancer (26). Therefore, PCT may be used as an indicator of diagnosis and prognosis of some cancers. Information about how PCT changes during the course of the advanced BC are still very limited. A previous study indicated a marked increase in PLT, PCT, and MPV in a 4T1 (mouse breast cancer cell strain type) mouse breast cancer metastasis model (27). Interestingly, another study discovered that the PCT in patients with breast cancer was lower in patients with metastasis when MPV did not change in the tumor stage (28). In our present study, we found that breast cancer patients with a lower baseline PCT level had better OS according to the Kaplan-Meier plots analysis, whereas baseline PCT level had no significant effect on chemotherapeutic efficacy. Moreover, univariate analysis and multivariate analysis both revealed that a higher baseline PCT level was an independent prognostic factor for OS.

MPV, an ordinary marker showing platelet function and activation, indicates the quantity of the average size of platelets (12,29). Recent studies have shown that a high MPV level is correlated with poor prognosis of various malignant tumors, such as breast cancer, endometrial cancer, and advanced gastric cancer (8,13,30). The impact of MPV on diagnosis, prognosis, and the chemotherapeutic effect in patients with breast cancer has been recently explored (30,31). Gu et al. found that high MPV can be useful in identifying patients with newly diagnosed breast cancer patients and is likely to present with distant metastasis in the future. An increased MPV has been consistently associated with larger tumors, higher stage, distant metastases, and a poorer prognosis in patients with breast cancer (30). Additionally, Mutlu et al. demonstrated that lower MPV was predictive of higher pathologic complete response after neoadjuvant chemotherapy in patients with ABC (31). In contrast, Gu et al. reported that there was no significant difference in survival between higher and lower MPV (30). Furthermore, other research has demonstrated that the value of MPV can be influenced by inflammation response (32,33). The elevated level of inflammatory factors can be detected by various kinds of tumors, including lung cancer and pancreatic carcinoma (34,35). Thus, changes in MPV status caused by cancer may be due to inflammatory stimuli. In this study, the MPV level had no relationship with the prognosis of breast cancer in patients.

PDW is an indicator reflecting the average change in platelet volume, whose relationship with prognosis of tumors is still controversial in the literature (8,36). Kurtoglu et al. confirmed that the PDW level of patients with endometrial cancer was significantly lower than that of healthy subjects (8). Conversely, Gunaldi et al. reported a high PDW level being positively related to metastasis of gastric cancer (36). Meanwhile, the value of PDW was shown not to be associated with the prognosis of esophageal cancer (14). In our study, a higher baseline PDW level was associated with better chemotherapeutic efficacy in breast cancer patients.

PLR, a value obtained by dividing PLT by lymphocyte count, has been proven to be a significant prognostic factor of some cancers, including non-small cell lung cancer, breast cancer, operable cervical cancer, and others (15,37). Li et al. conducted a meta-analysis confirming that elevated PLR level is associated with poor OS of pancreatic cancer patients (38). Also, Pietrzyk et al. found that PLR, as a blood parameter, was higher in patients with gastric cancer compared to the healthy control subjects (39). Furthermore, a recent meta-analysis, including 12,754 patients showed that a high PLR level was related to shorter OS in various solid tumors (40). In this study, the PLR level had no significant effect on the prognosis for breast cancer patients.

In conclusion, we have demonstrated that a lower baseline PCT level is correlated with better OS in ABC patients. This noninvasive, simple, and low-cost biomarker may be a prognostic indicator. However, there are some limitations to our study, which may include its retrospective design, the fact that all patients were from a single center, and an insufficient number of cases.

The lower baseline PCT level was related to better OS in ABC patients, and PCT level might thus be a potential prognosis factor for ABC.

Ethical Statement: The authors are accountable for all aspects of the work in ensuring that questions related to the accuracy or integrity of any part of the work are appropriately investigated and resolved. As a retrospective investigation, this study was approved by the Medical Ethics Committees of the First Affiliated Hospital of Soochow University.