Rapid developments in radiation therapy technologies have enabled the use of energy of the order of megavoltage or higher, thus reducing the integral dose to surrounding normal tissues. Furthermore, innovative therapies such as image guided radiation therapy and volumetric intensity modulated arc radiotherapy enable the delivery of a tumor-healing dose while lowering the probability of normal tissue complications (1). Radiation therapy using protons relies on the characteristics that energy is not lost in the surface layer when the particles enter the tissue and most of the energy is transferred when the protons reach their maximum range. This type of therapy has been reported to produce a greater dose concentration in tumor tissue and excellent normal tissue protection effects compared to X-rays, the strength of which decrease exponentially with depth (2-4). Thus, radiation therapy is moving from low- to high-energy radiation and developing from X-ray to heavy-particle therapies. The ultimate goal of radiation therapy is to minimize the effects of radiation on surrounding normal tissues while delivering a sufficient healing dose to the tumor. However, special care must be taken because, depending on the position of the tumor, pathologic findings, and body condition, the dose required to improve the tumor control probability (TCP) can cause disorders in normal tissues (5,6). Ideally, the TCP should be high while the normal tissue complication probability (NTCP) remains low, and the difference between them should increase. This concept can be quantified through the therapeutic ratio (TR) (7). To improve the TR, therapies such as concomitant chemoradiotherapy, dose enhancement, hyperthermia, and charged-particle therapy have been developed (8-11). Dose enhancement is a method of increasing the interactive cross-section of materials with a high atomic number and the electron density in the medium, which increases the energy delivered to local sites by increasing the generation of secondary particles such as photoelectrons and Auger electrons (12,13). The radiation physics actions in this process include the photoelectric effect, Compton scattering, and pair production for X-rays; for protons, they can be explained by the Coulomb force between the proton and electron in the material, energy loss by inelastic collision with the nucleus, and so on (14). An increase in cross-section leads to an increase in the linear energy transfer (LET) in the material, which, in turn, increases the relative biological effectiveness, thereby increasing the effectiveness on the tumour (8). Considering biocompatibility and chemical stability, gold, iodine, and gadolinium are used for dose enhancement (15,16). In terms of particle size, the application of nanoparticles has been reported to produce enhanced permeability and retention in the tissue and the vasculature system (17,18). The effect of dose enhancement is influenced by the material type, particle size, concentration, and quality of incident radiation (19). Many studies on this subject have been conducted in recent years, using in vivo and in vitro experiments as well as Monte Carlo simulations.

This study used the Geometry and Tracking (Geant4) software ver. 10.03 for Monte Carlo simulations. The head phantom of the medical internal radiation dose (MIRD), developed by the Oak Ridge National Laboratory, the simplified phantom was modeled (24,25). The phantom is composed of a 0.3-cm soft tissue layer, 0.2-cm scalp layer, 11.5-cm parenchyma, 0.9-cm cranium, and 2.5-cm tumor tissue inside the parenchyma (Figure 1). The composition of the materials followed report 46 of the International Commission on Radiation Units and Measurement (ICRU) (see Table 1) (25). 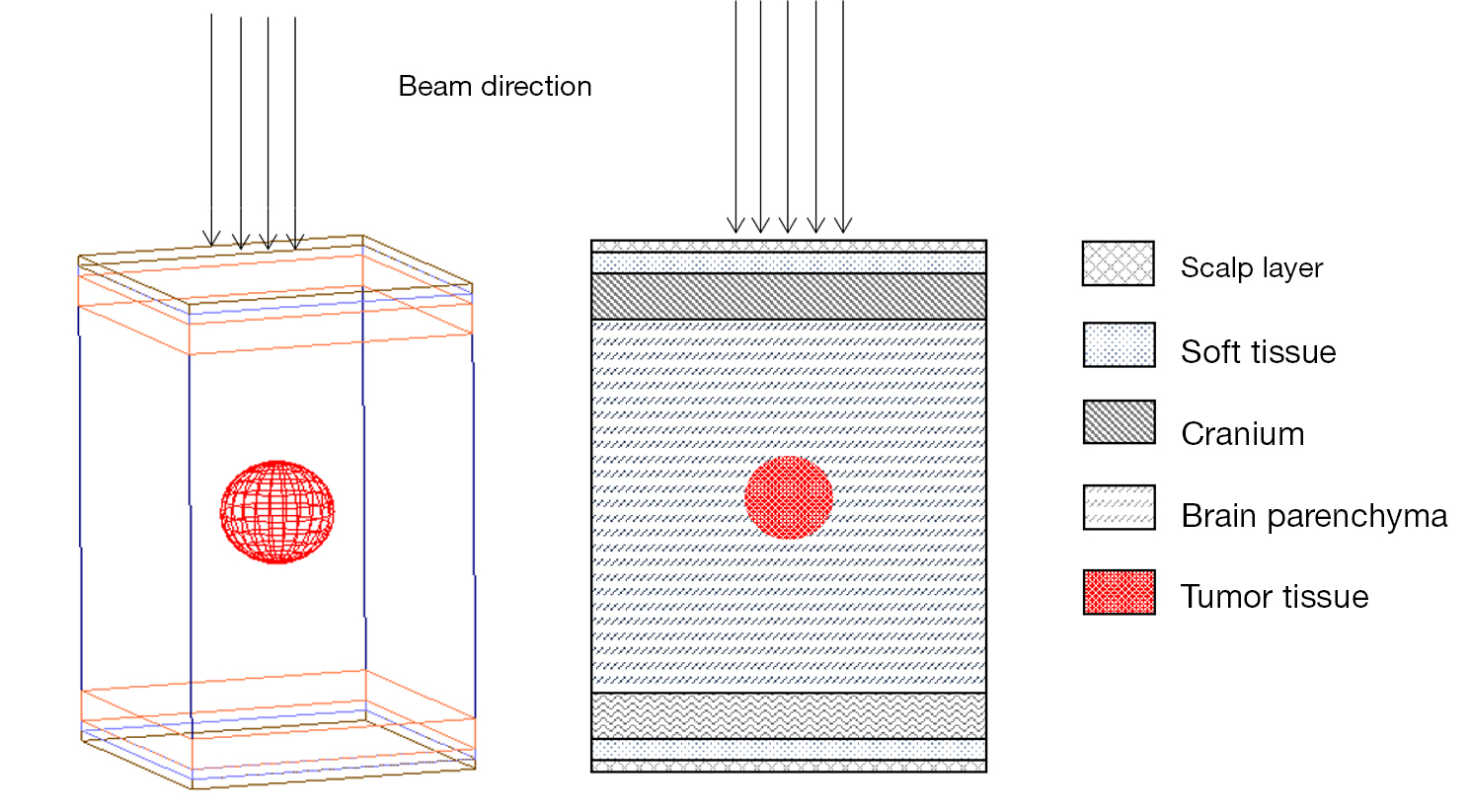 Figure 1 Diagram of head slab phantom based on the MIRD-ORND phantom.

The change of weighting and energy for proton beams can be obtained from the flux passing through the range modulation wheel in the nozzle of the treatment machine and the range-compensated range, but can also be calculated mathematically (26-28). In this study, the energy spectrum of the proton’s spread-out Bragg peak (SOBP) was calculated by applying the mathematical method proposed by Jette and Chen (29) and Bortfeld (30). Protons were injected perpendicular to the surface of the phantom onto a field of size 10×10 cm2. For the physical model, QGSP_BIC, which includes a standard electromagnetic model, was applied. The lower limit of the particle tracking range was set at 1 mm, and Auger electrons generated from the de-excitation process in the material were included in the computer simulation. The initial particle transport was set at 5×108 source particle histories, considering the statistical error. To simulate the dose enhancement in the tumor volume, Au and Gd were applied at concentrations of 10, 20, and 30 mg/g based on previous results (16,19,31). For the interactions caused by the enhancement phenomenon in the phantom, the change ratio of the reaction caused by the interaction of the initial particles with the material were calculated according to the quality of radiation, enhancement material, and concentration using Geant4’s sensitive detector. Secondary particles produced through this process were subsequently tracked and simulated to obtain the particle fluence and energy absorbed by deposition.

In addition to the fluence of secondary particles, the absorbed dose by Geant4’s sensitive detector is calculated as the equivalent dose considering the weight of the beam quality. The equivalent dose calculated from radiation weighting factor (WR) in publications 103 and 119 of the International Commission on Radiological Protection (32,33) can be expressed as Eq. [1]: Geant4’s sensitive detector. Secondary particles produced through this process were subsequently tracked and simulated to obtain the particle fluence and energy absorbed by deposition.

where HT is the equivalent dose in Sieverts (Sv) by tissue T, WR is the radiation weighting factor, DR is the absorbed in grays (Gy) by radiation type R. Similarly, the frequency of physical processes and the generation of secondary particle from the dose enhancement material was also analyzed.

To adequately contain the tumor tissue, the SOBP in the water phantom was represented using the mathematical method proposed by Bortfeld (30). The constituent energy was divided into 16 levels ranging from 50–100 MeV. The energy and relative weight for each interval are listed in Table 2. The 95% modulation range (M95) was 2–7 cm, the interval length was 5 cm, the practical range for 100% dose was 7.8 cm, and the flatness was 2.21% (Figure 2). 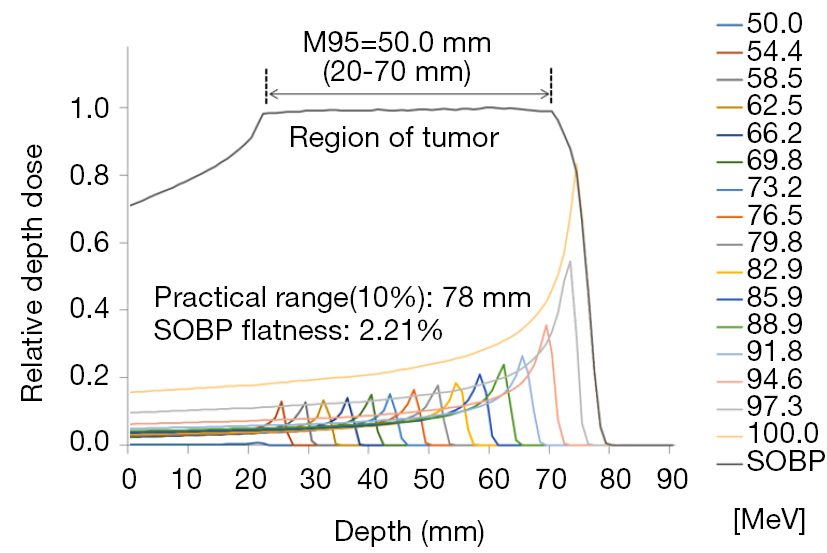 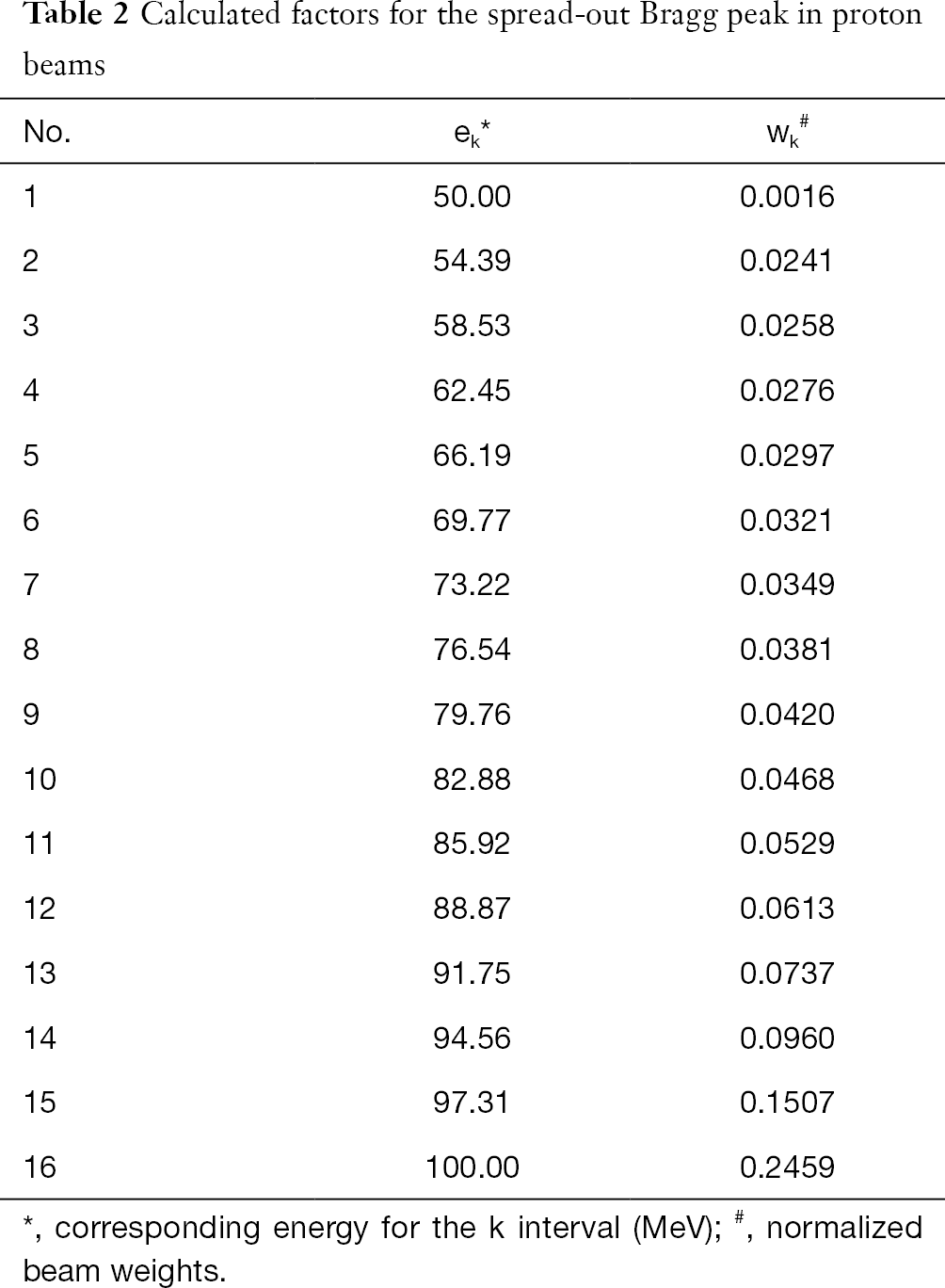 Figure 3 Increased ratio of interactions with protons, spread-out Bragg peak according to various concentrations. (A) Gold and (B) gadolinium. 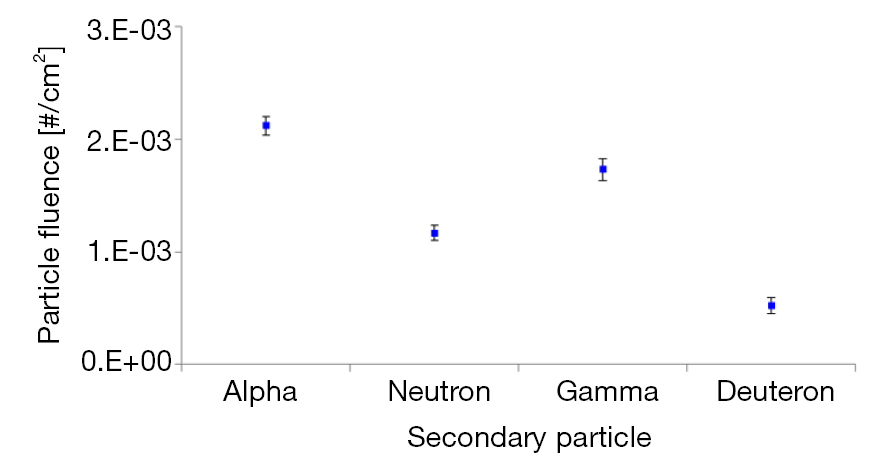 Polf et al. (34) conducted dose enhancement using protons with Au particles in prostate cancer cells, and reported that the dose enhancement factor increased by 10–15%, whereas Kim et al. (35) reported a high-volume reduction in tumor tissue with Au particles and protons at 45 MeV. Thus, some researchers have reported the effects of dose enhancement using protons, but studies on the generation of electrons from ionization and the mechanism of physical reactions with these electrons are limited. This study has calculated the proton spectra of SOBP and analyzed physical interactions of enhancement materials such as Au and Gd, and evaluated the changes in the production of secondary particles.

It has been found that the physical actions of protons in a material mostly consist of ionization by the Coulomb force, and the frequency of energy loss by nuclear inelastic collision is very low (36). To analyze the changes in the frequency of interactions under various enhancement materials, the interactions inside the tumor tissue were traced from the initial particles using Monte Carlo simulations. Inelastic Coulomb scattering by the Coulomb force occurred in over 90% of interactions, with elastic collision, nuclear inelastic collision, and multiple Coulomb scattering appearing at low frequencies. Also, the higher the concentration of dose enhancement material was increased the frequency of interactions. This phenomenon appears to be due to the increase in ionization caused by the enhanced mass-stopping power of the enhancement material. An increased frequency of interactions in a material can decrease the protons’ range and SOBP range. Ahmad et al. (37) reported 30–38% reduction of range in the interactions between 60 MeV proton and high atomic number material such as aurum and platinum, higher the atomic number of the material was reduced range of Bragg peaks.

The production of secondary particles was analyzed for the alpha particles, neutrons, deuterons, and gamma rays. Increased production of secondary particles from interaction of dose enhancement material, such as Au and Gd. Specifically, the equivalent dose increased by factors of up to 1.86 and 384.68 with neutrons and gamma rays, respectively. Dawidowska et al. (38) reported production of 0.1%, 0.4%, 0.5%, 0.6%, and 0.7% of neutrons from protons with energies of 50, 55, 60, 65, and 70 MeV, suggesting that higher incident energy in the protons increases neutron production. Based on this result, the production of secondary particles will increase further before the protons reach the tumor tissue inside the simulated body. According to Mowlavi et al. (39), the frequency of interactions in materials with 30–60 MeV protons was greater than 99% for the ionization process, and lower than 1% for nuclear inelastic collision. This is similar to the results found in this study, which showed a frequency of 0.7% for nuclear inelastic collision. Thus, it is estimated that the transmitted dose of secondary particles generated from nuclear inelastic collisions, which occur at a very low frequency in the interaction between protons and the enhancement material, will be very small. However, as the dose realized by secondary particles produced in a material cannot be removed and has a significant biological effect, this phenomenon may increase the possibility of probabilistic disorders such as secondary cancer. Therefore, it is very important to identify these physical properties.

The physical characteristics of the dose enhancement phenomenon and secondary particle production were evaluated with the SOBP. More than 99% of the physical interactions of the SOBP were found to consist of energy transmission by inelastic Coulomb scattering due to electrical actions. In the dose enhancement process, the frequency of physical interactions was increased by dose enhancement material, such as Au and Gd. The production of secondary particles from nuclear inelastic collisions confirmed that, as the concentration of the enhancement material increases, the equivalent dose also increases. The dose increased by factors of up to 1.86 and 384.68 with neutrons and gamma rays, respectively. The dose enhancement simulations conducted in this study correspond to the physical characteristics of energy transmission, and the results of this study are expected to be used as basic data for in vivo and in vitro experiments investigating the effects of dose enhancement.

Funding: This work was supported by a Basic Science Research Program through the National Research Foundation of Korea (NRF) funded by the Ministry of Education (grant number 2016R1D1A1B03931929).