Lung cancer, which is generally divided into non-small cell lung cancer (NSCLC, about 85% cases) and small cell lung cancer (SCLC, about 15% cases), is the leading cause of cancer-related mortality worldwide (1). The major histological subtypes of NSCLC are adenocarcinoma and squamous cell carcinoma (2). When diagnosed at an earlier stage (stage I), surgical therapy of NSCLC possesses a good prognosis for localized and small tumor patients with a 5-year survival rate of 70–90% (3). Unfortunately, most patients (75%) are diagnosed at later stages (4) and although prominent progress in the therapy of advanced stage lung cancer (stage III/IV) has been made in recent years, the survival rate remains poor. Data from the UK Office of National Statistics revealed that the one-year survival rate for stage IV patients is only 15–19% (5).

Chemotherapy is a central strategy for both surgical and inoperable cancer patients, while platinum is mild in the treatment of advanced NSCLC (6). Drug resistance and adverse drug reactions, however, greatly weaken the therapeutic effects of these strategies. In recent years, the therapeutic strategy for advanced NSCLC has transformed from histopathology-based traditional chemotherapy into carcinogenic factor-based individualized precision treatment (7). Previous study revealed that MTA1 might be an important biomarker in the diagnosis of NSCLC (8). Hyperactivation of Wnt/β-catenin and transforming growth factor-β (TGF-β) signaling has been implicated in the metastasis of NSCLC (9). Other studies showed that phosphatase and tensin homolog (PTEN) deficiency (10) and over-expression of insulin-like growth factor-1R (IGF-1R) (11)were closely associated with poor prognosis in NSCLC patients. Although therapeutic targets and biomarkers have, to some degree, contributed to improving NSCLC diagnosis and therapy, the complex pathogenesis of NSCLC remains a challenge and thus necessitates additional genetic information to develop better medical treatment (12).

FAM46 proteins, which belong to the nucleotidyltransferase (NTase) fold superfamily (13) of proteins, contain four human paralogs (FAM46A, FAM46B, FAM46C, FAM46D). FAM46A has been reported as a positional candidate for human retinal diseases and might associate with NSCLC (14,15). FAM46B is described as a potential marker for refractory lupus nephritis (16), while FAM46C is considered as a type I interferon-stimulated gene (ISG), which promotes replication of certain viruses (17). Results from gene set enrichment analysis (GSEA) revealed that lower FAM46B expression is correlated with the metastasis of lung cancer and involves Wnt signaling pathway (Supplementary file). However, only a few reports focus on the relationship between FAM46B and NSCLC. Hence, the present study examined the expression of FAM46B in 5 NSCLC cell lines, investigated the effects of FAM46B on NSCLC invasiveness, and probed the involvement of downstream β-catenin signaling in this process.

Human cancer tissues and corresponding paracancerous normal tissues were collected from lung cancer patients [37 patients with a mean ± standard error of mean (SEM) age of 55±10 years] who received pulmonary resection. This study was conducted with approval from the Ethics Committee of our hospital (YS-2019-065) and in accordance with the Declaration of Helsinki. Written informed consent was obtained from patients. Relative mRNA expression of FAM46B and protein levels of FAM46B and β-catenin were detected in the paired tissues.

FAM46B (NM_052943.3) shRNA and over-expression lentiviral vectors were designed (shown in Table 1), constructed and verified by JRDun Biotechnology (Shanghai, China). Viral supernatants were diluted in the medium at appropriate concentrations and added to monolayer cells in follow-up experiments.

Viral supernatants were diluted in the medium at appropriate concentrations and added to monolayer cells. Cells were then cultured with DMEM medium supplemented with 10% FBS at 37 °C (5% CO2) for 48 h. Cells were harvested at 0, 24 and 48 h after treatment. Cell proliferation was assessed using CCK-8 assay kit following manufacturer’s instructions.

For transwell migration assay, a transwell chamber (corning-costar) was used according to manufacturer’s instructions. Briefly, cell culture inserts (aperture 6.5 mm) were rehydrated with serum-free DMEM at 37 °C for 2 h, and then 1×105/mL cells (in 500 µL serum-free DMEM) were seeded onto the upper chamber with 0.1% dimethyl sulfoxide (DMSO) control or viral supernatants/test drug. Meanwhile, 750 µL DMEM with 10% FBS was added into the lower chamber. After 24 h, cells on the upper surface of the membrane were wiped off by gentle swabbing. The cells that had migrated through the pores were fixed. After standard staining and microscopic examination, five random images per chamber were obtained at 200× magnification. Relative migration was calculated by counting cells and normalized to the negative control cells.

Invasion of cells into matrigel was determined similar to the migration assay. Briefly, after pre-hydration, 80 µL matrigel was added into the invasion chambers following incubation at 37 °C for 30 min. 2×105/mL cells (in 500 µL serum-free DMEM) were seeded onto the upper chamber with 0.1% DMSO control or viral supernatants/test drug. Meanwhile, 750 µL DMEM with 10% FBS was added into the lower chamber and cells were incubated at 37 °C with 5% CO2 for 24 h. Non-migratory cells from the upper filter surface were removed by a cotton swab, and the cells that had migrated through the pores were fixed, stained and counted. The calculation method of relative invasion was the same as the migration assay described above. 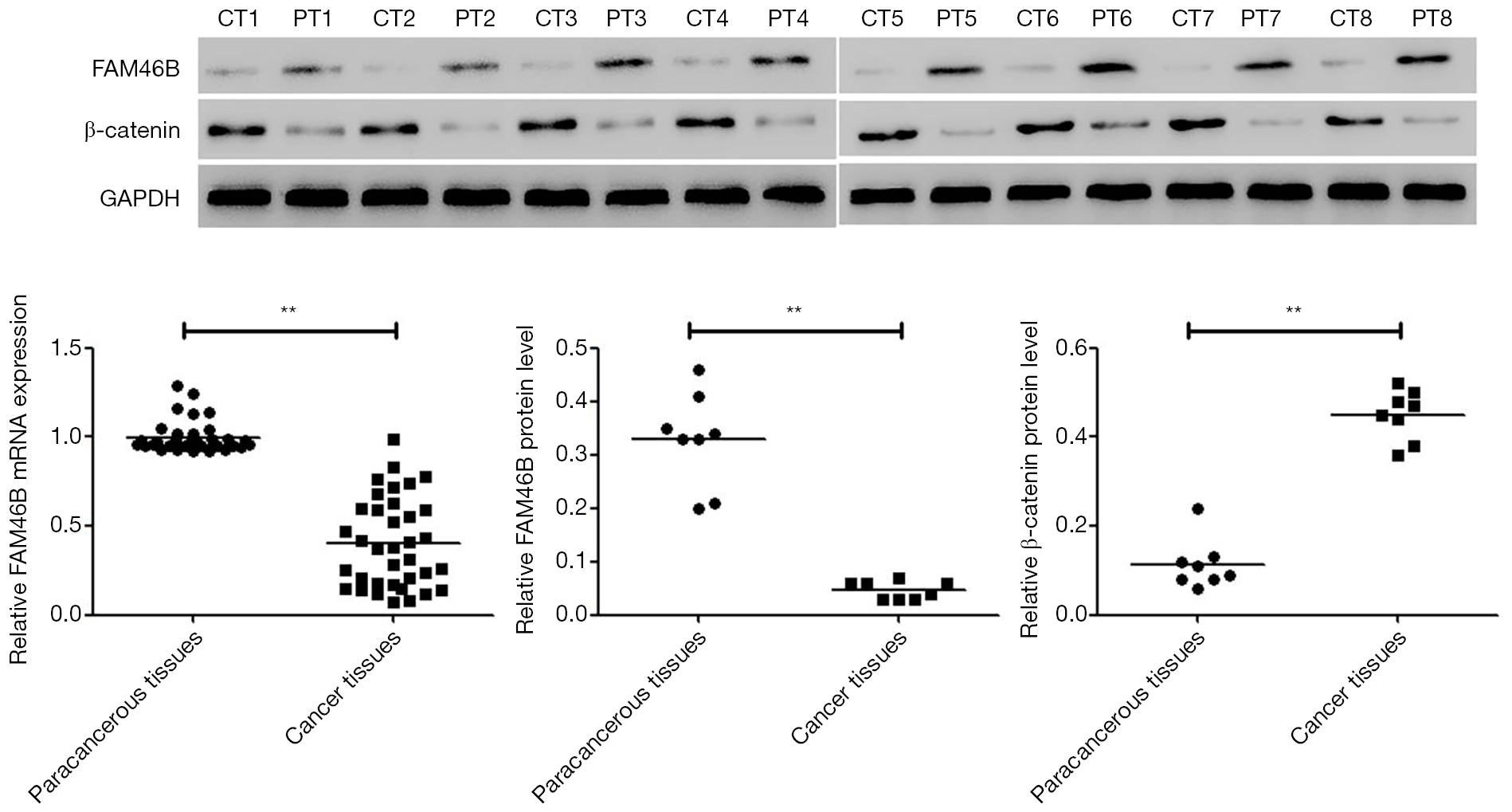 Results from GSEA revealed a correlation between lung cancer metastasis and reduced FAM46B expression (Supplementary file). In the present study, 5 NSCLC cell lines (A549, H1299, H1975, H292 and H358) and 1 human bronchial epithelial cell line (16HBE) were used to investigate the mRNA and protein levels of FAM46B. The results indicated that FAM46B displayed lower expressions in A549 and H292 cells but higher expressions in H1975 cells compared with 16HBE cells (Figure 2). These three cell lines (A549, H292 and H1975) were subsequently used in follow-up experiments. 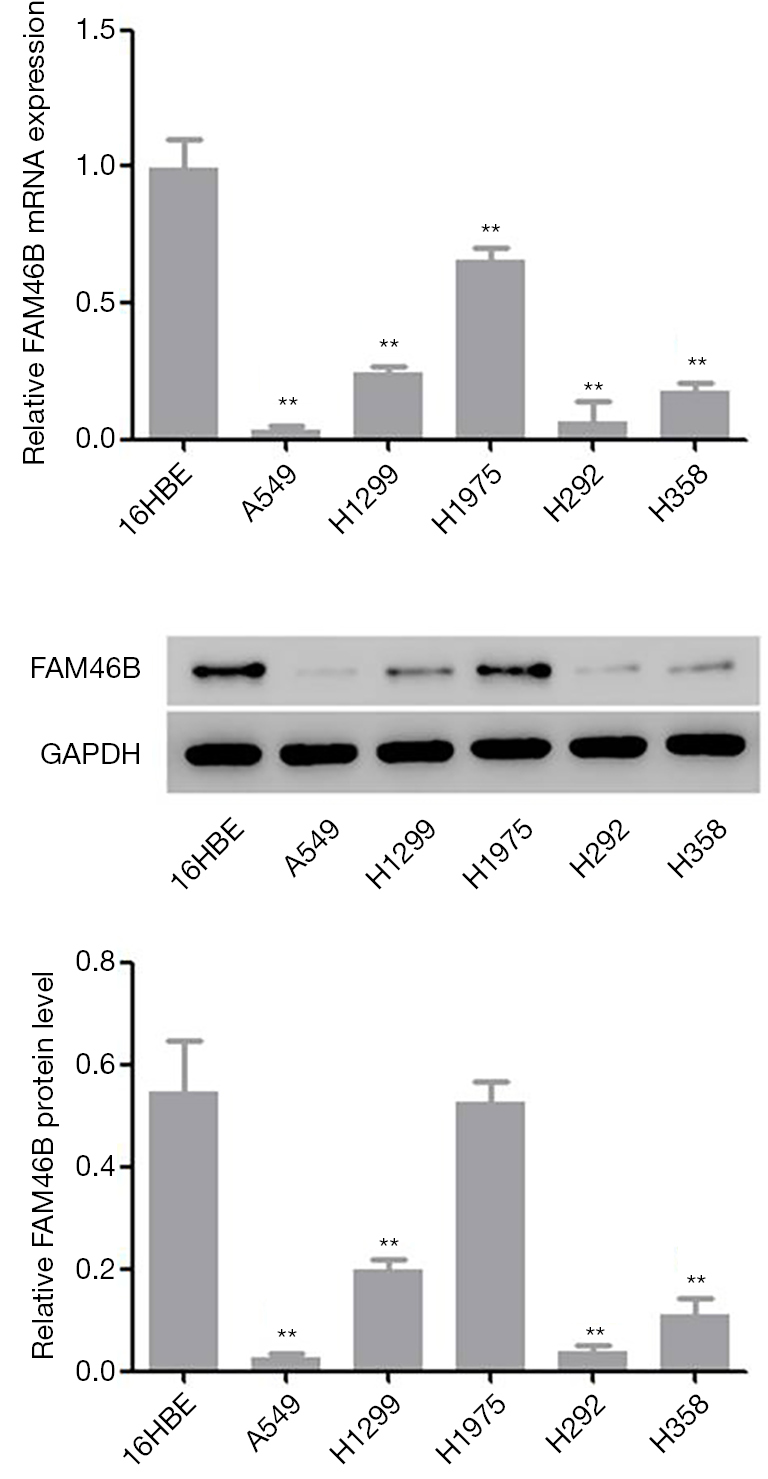 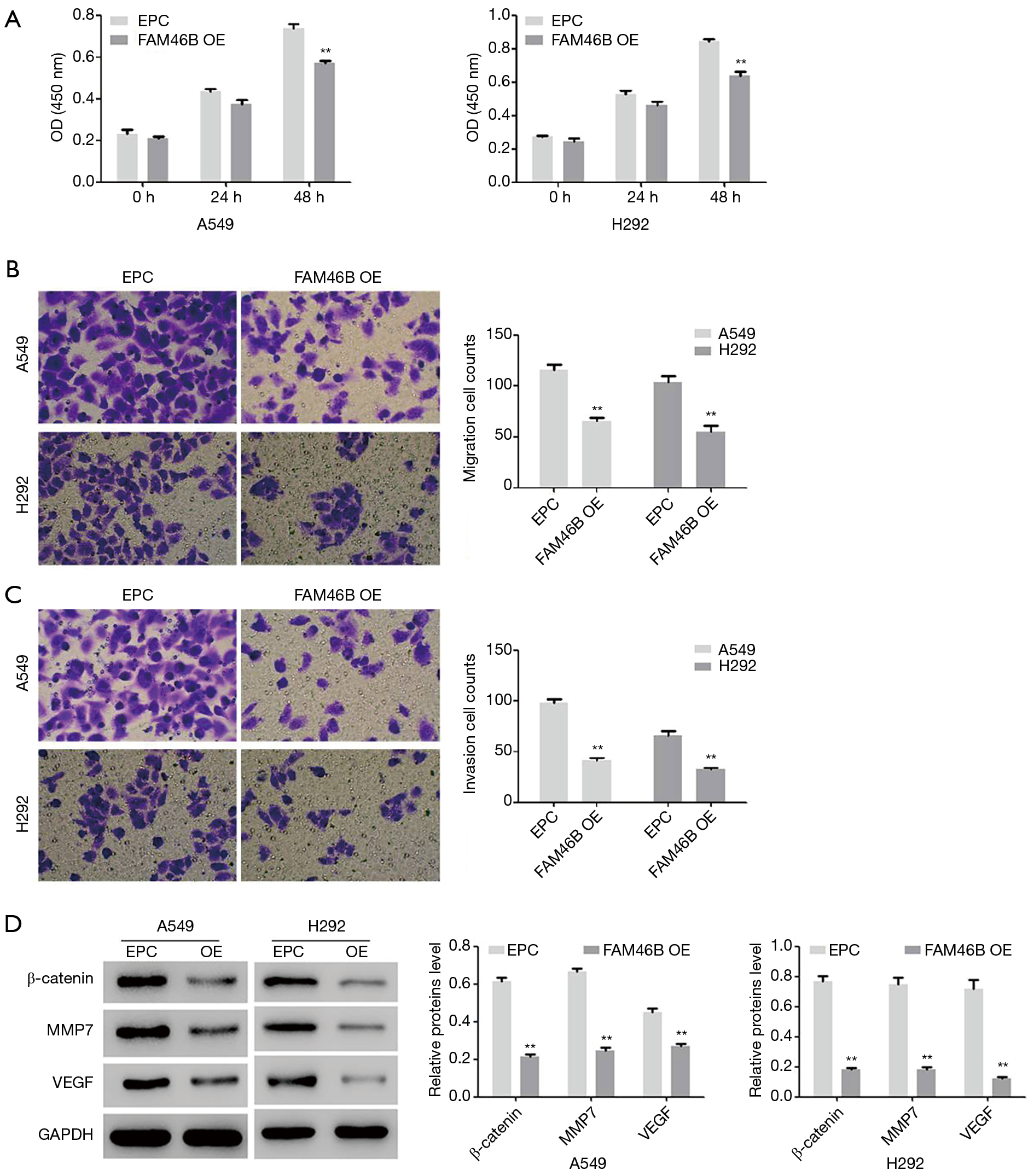 Of the 5 NSCLC cell lines, H1975 cells displayed the highest FAM46B expression (Figure 2) and were used for follow-up experiments. We investigated the effects of FAM46B RNAi on the proliferation, migration and invasion of H1975 cells, as well as the effects of blocking Wnt/β-catenin signaling in H1975 cells. Interestingly, we found that FAM46B knockdown by shRNA markedly enhanced proliferation, migration and invasion of H1975 cells (Figure 4). Moreover, these effects were ameliorated by treatment with the Wnt/β-catenin inhibitor, XAV939 (19). Furthermore, β-catenin, MMP7 and VEGF protein levels were increased by FAM46B knockdown but decreased by co-treatment with XAV939 (Figure 4). 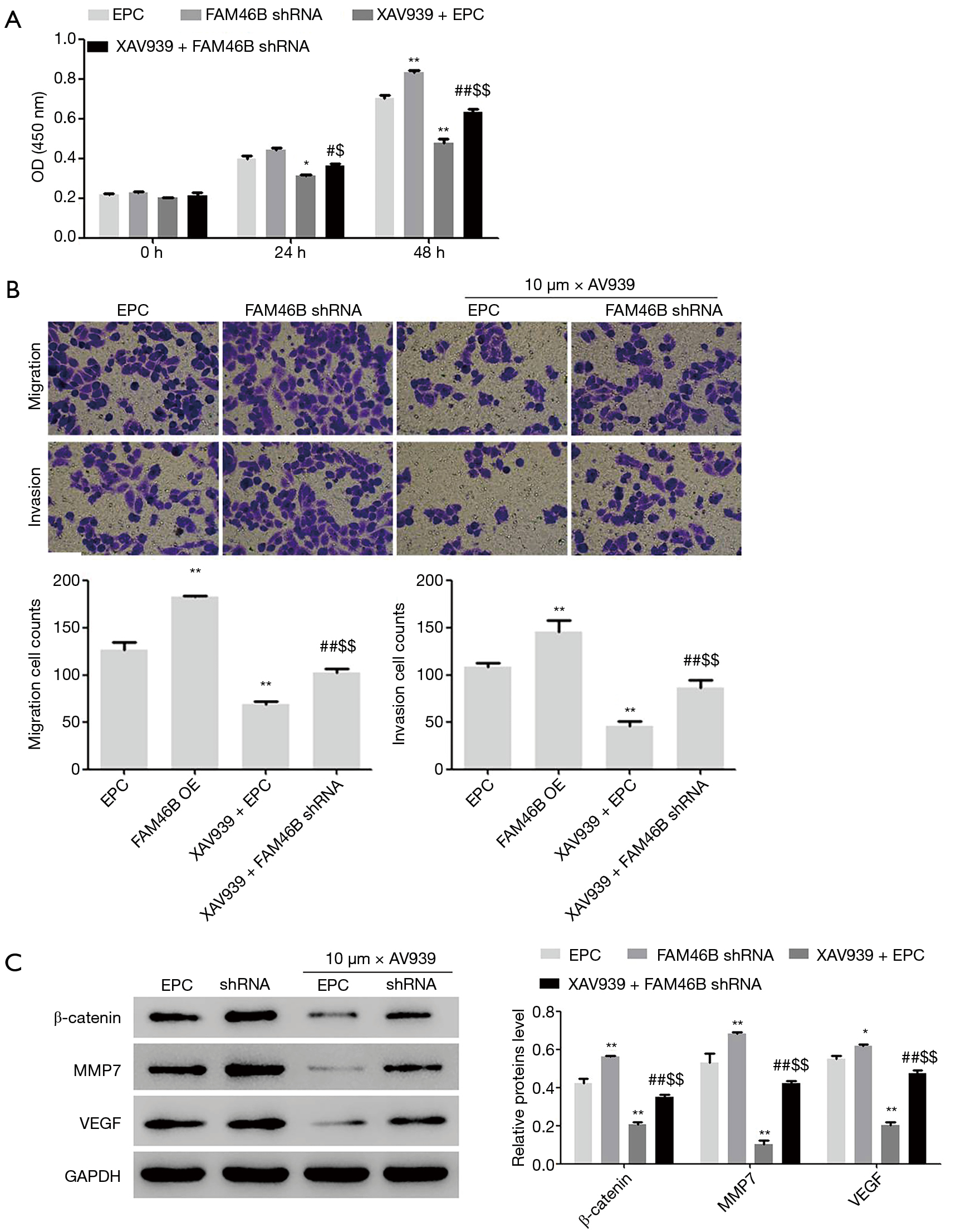 Lung cancer is the leading cause of cancer-related mortality worldwide (1). Air contamination and cigarette smoke are primary causes of lung cancer (20,21). Traditional strategies for lung cancer treatment frequently lead to toxic side effects and are unavailable for some patients (22). Compared with histopathology-based traditional chemotherapy, molecular-targeted therapy shows reduced toxicity to normal tissues, high selectivity and better promise for eradicating the tumor (7,23,24). Our present study suggested that FAM46B acts as a tumor suppressor in NSCLC. Its expression is markedly reduced in lung cancer tissues compared to paired paracancerous tissues. Furthermore, over-expression of FAM46B weakened the proliferation, migration and invasion of H292 and A549 cells, while inhibiting β-catenin/MMP7 signaling.

β-catenin is the major component of Wnt signaling and has been shown to influence epithelial mesenchymal transition (EMT) (25,26). Hyperactivation of β-catenin is known to enhance cell migration and invasion, as well as induce EMT in NSCLC (27). MMP7 is a downstream target of β-catenin and involved in tumor progression by promoting EMT, cell invasion and metastasis (28). A previous report indicated that phospholipase Cδ1 suppresses cell migration and invasion of breast cancer cells via down-regulation of β-catenin/MMP7 signaling pathway (29). VEGF is known as a key regulatory factor involved in the regulation of tumor growth by activating host vascular endothelial cells, stimulating tumor angiogenesis, and enhancing malignant tumor progression (30). The present study revealed that FAM46B over-expression significantly reduced the protein levels of β-catenin, MMP7 and VEGF in both A549 and H292 cells. Conversely, FAM46B knockdown elevated the protein levels of β-catenin, MMP7 and VEGF, and stimulated proliferation, migration and invasion of H1975 cells. These effects were weakened by co-treatment with the Wnt/β-catenin signaling inhibitor XAV939, suggesting that β-catenin signaling is likely to mediate the functions of FAM46B in NSCLC.

Taken together, our study demonstrated that proliferation, migration and invasion of NSCLC cells are inhibited by FAM46B over-expression and stimulated by FAM46B knockdown. Hence, FAM46B may function as a tumor suppressor in NSCLC by regulating β-catenin, MMP7 and VEGF. 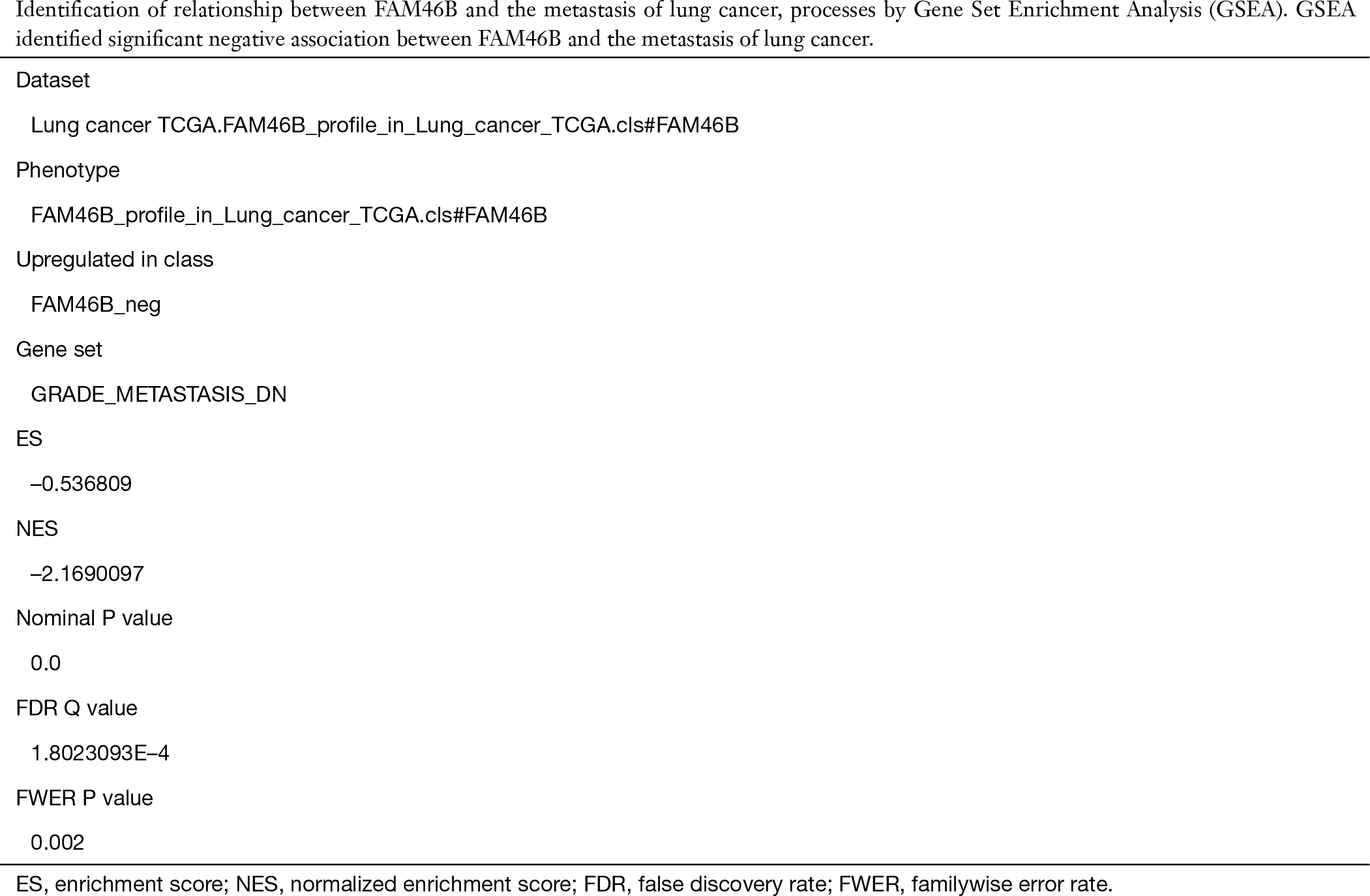 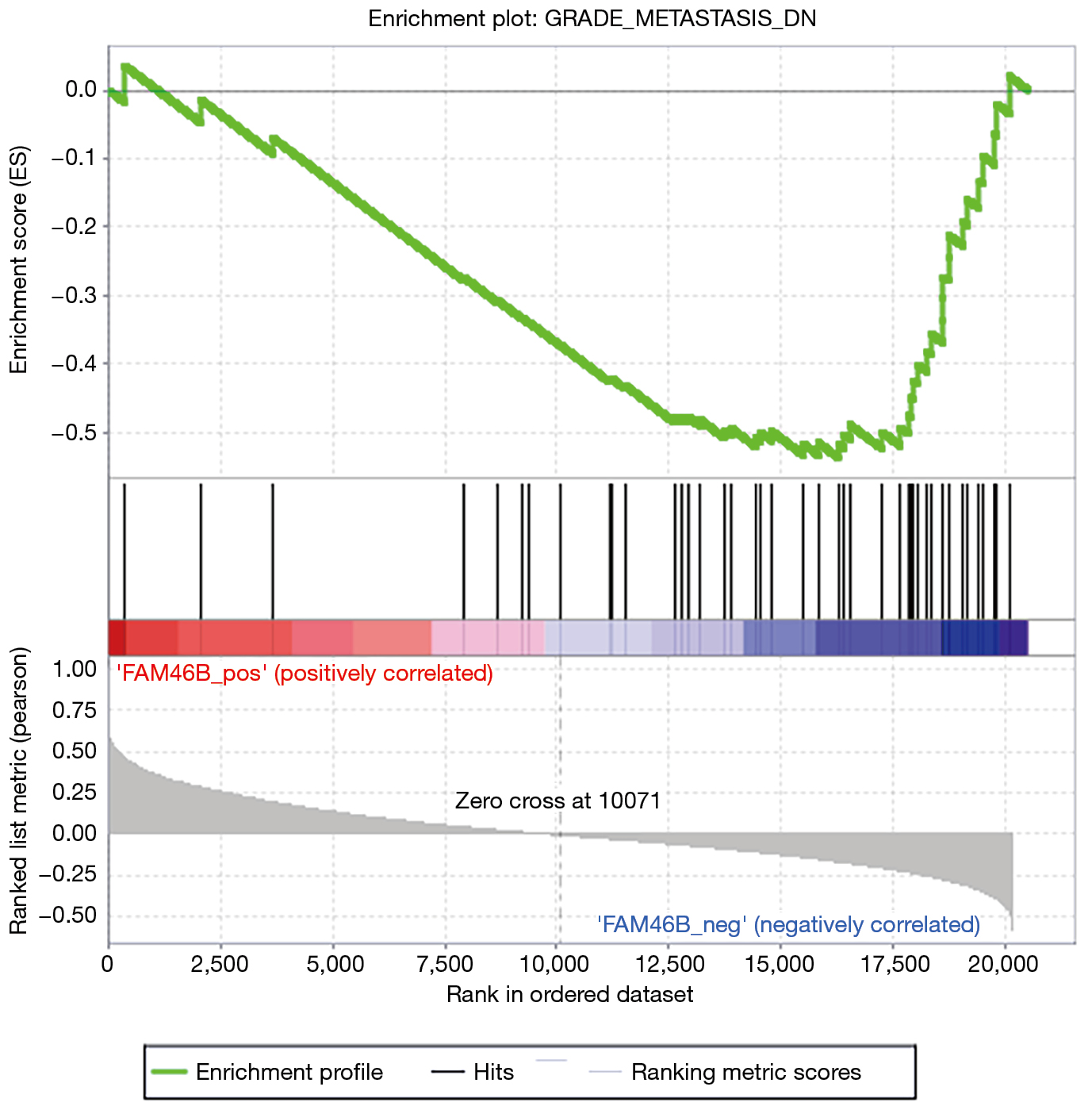 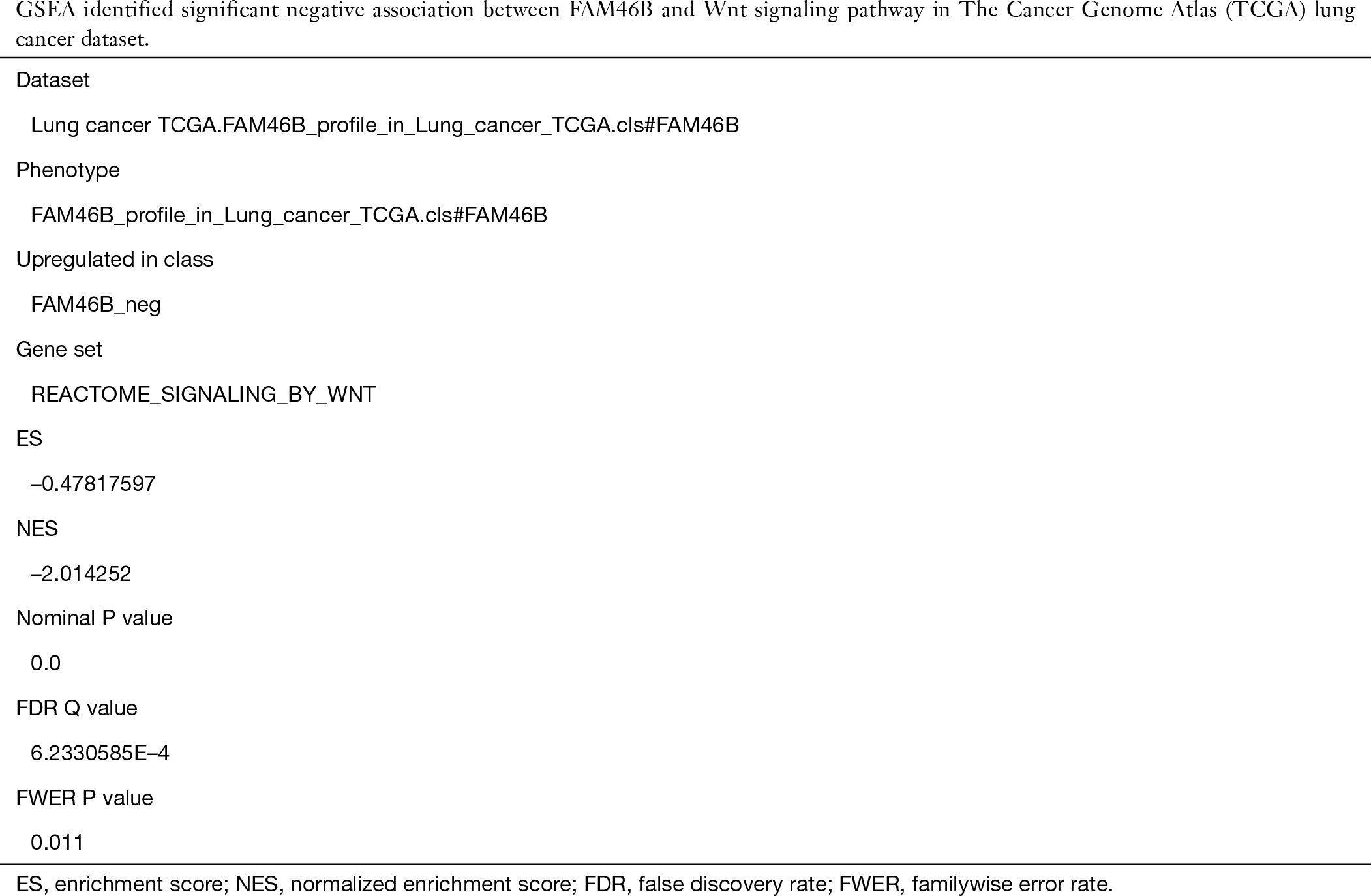 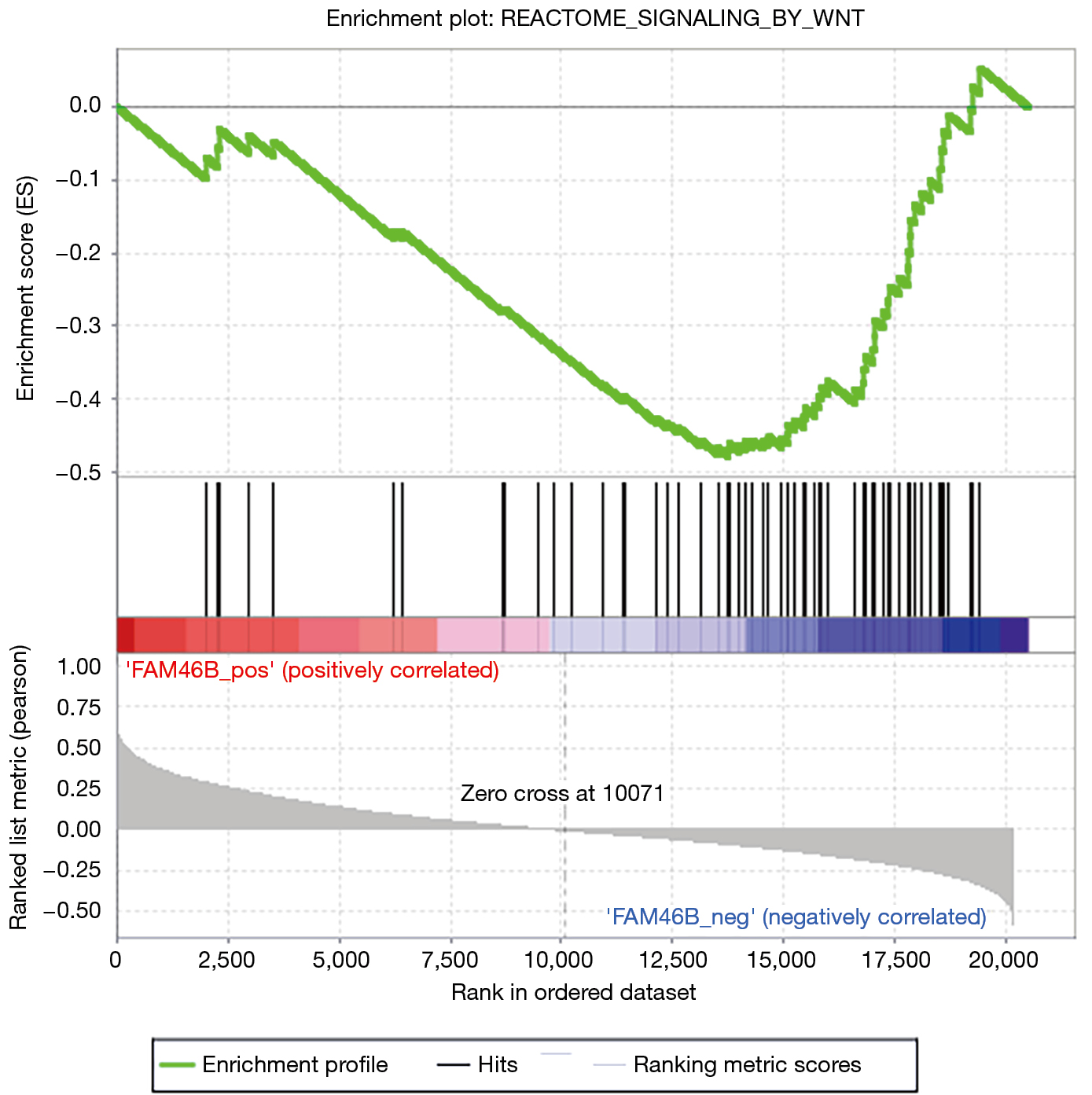 We greatly appreciate the language help from YiBio Editing Inc.

Ethical Statement: The authors are accountable for all aspects of the work in ensuring that questions related to the accuracy or integrity of any part of the work are appropriately investigated and resolved. The study was approved by the Ethics Committee of the Sixth People’s Hospital affiliated to Shanghai University of Medicine & Health Sciences and conducted in accordance with the Declaration of Helsinki 2013 (YS-2019-065). Signed written informed consents were obtained from the participants and/or guardians.