Although pancreaticoduodenectomy (PD) has become a standard operation for patients with periampullary tumors and pancreatic head cancer, postoperative complications including malabsorption still threaten the postoperative outcomes and survival rate (6-8). The malnutrition often gets worse in early postoperative period which considerably affects mortality, wound healing, intestinal barrier function and postoperative complication rate (9,10). Therefore, researchers have sought for decades to prove whether clinical outcomes can be improved by the administration of postoperative nutritional supports, among which total parenteral nutrition (TPN) and early enteral nutrition (EEN) are the most common ones (11).

It has been debated which nutrition way is better for patients after PD, but the results never reached consistent. A recent randomized multicenter controlled trial compared the outcomes between EEN and TPN after PD, in terms of postoperative complications (12). It concluded that EEN group was associated with a significantly increased overall postoperative complications rate, such as pancreatic fistula. However, a meta-analysis performed by Shen showed early EEN appeared safe and tolerated for patients after PD, but did not show advantages in postoperative infection and hospital stay than TPN (13).

The protocol of the meta-analysis has been approved and registered in PROSPERO database (University of York, York, UK) with a registration number of CRD42019121932. Two independent reviewers performed a comprehensive and systematic literature search to identify relevant studies from the databases of PubMed, Embase, Web of Science, Chinese National Knowledge Infrastructure (CNKI) and Wanfang databases. Following keywords with different combinations were used for bibliographic search: “enteral nutrition”, “parenteral nutrition”, “nutrition”, “pancreatic cancer”, “pancreaticoduodenectomy” and “Whipple”. The searches were limited to human studies and both English- and Chinese-language literature. The last search date was December 31, 2018.

Inclusion criteria were: (I) randomized controlled trials (RCTs) reporting the short-term (seven to ten days after surgery) clinical outcomes between EEN (including oral intake, jejunostomy and nasojejunum) and TPN; (II) at least 15 participants in each group; (III) patients pathologically diagnosed with pancreatic ductal adenocarcinoma (PDAC) and underwent PD; (IV) nutritional supports initiating on the first postoperative day and lasted more than ten days; (V) patients treated with isonitrogenous and isocaloric nutrients; (VI) studies available to get complete data. And exclusion criteria were: (I) duplicated papers failing to provide supplementary information; (II) unfinished studies or unavailable data. Literatures were selected by two researchers, and any disagreements were resolved by consensus or judged by the senior authors.

Full-text reviews and quality assessment were conducted for articles which passed the primary selection by two reviewers independently. CONSORT statement (14) was used to measure the quality of randomized controlled trials (RCTs). Reviewers evaluated the risk of bias according to the Cochrane Handbook for Systematic Reviews of Interventions. Any disagreements were resolved through consensus.

We performed the meta-analysis using RevMan 5.3 software (Cochrane Collaboration, Copenhagen, Denmark). Weighted mean difference (WMD) with 95% confidence interval (CI) was calculated for continuous variables and relative risk (RR) with 95% CI was calculated for dichotomous variables. Forest plots were presented graphically for short-term nutritional status and bowel function. Statistical heterogeneity among studies was calculated using chi-squared test and the I-squared measure on a scale of 0–100% (less than 50% represented a low heterogeneity, 50–75% indicated a moderate inconsistency and higher than 75% meant a large degree of heterogeneity). Fix-effect model was conducted in analysis with heterogeneity <50% and random-effect model was used with heterogeneity ≥50%. Publication bias of total complications was assessed using funnel plot. Two-sided P<0.05 was considered to be statistically significant.

Literature selection and characteristics of studies

The process of literature selection for eligible studies and exclusion reasons was presented as a flow diagram in Figure 1. Initially, 864 published articles were identified (104 from PubMed, 250 from Embase, 146 from Web of Science, 83 from CNKI and 281 from Wanfang database). Overall, 159 unduplicated articles were selected from these citations. Finally, seven RCTs with a total of 486 patients were included in the present analysis (15-21). The basic characteristics of included studies were presented in Table 1. Among the included patients, 245 (50.4%) subjects got EEN while 241 (49.7%) patients received TPN. Patients in EEN group received nutritional supplementation by placing a nutrition tube in the jejunum within 24 h postoperatively. Subjects in both groups were treated with isonitrogenous and isocaloric nutrients per day.

Funnel plot of short-term total complication rate was established in Figure 4, and there was no evident publication bias among studies by visual examination. 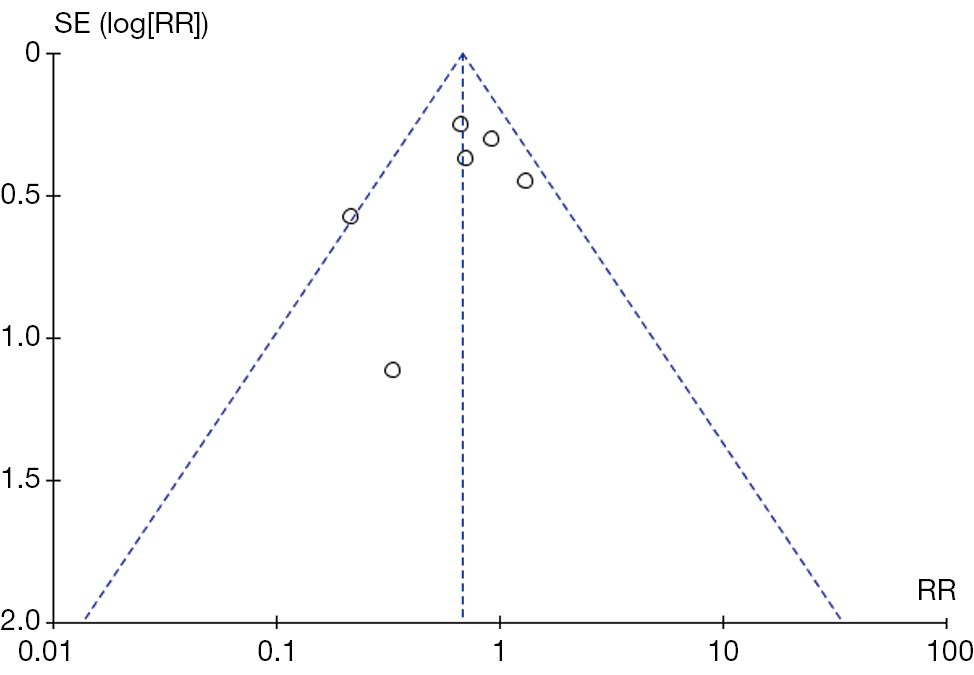 Nowadays, surgical resection becomes a standard of care to patients with pancreatic cancer without either metastatic or locally advanced disease (22). In the present study, EEN showed better outcomes in improving postoperative plasma TP in patients with pancreatic cancer. As we know, those patients are more vulnerable to get postoperative malnutrition, with a sign of hypoproteinemia or hypoalbuminemia, due to surgical trauma and long operation time (23). And malnutrition is now considered as a risk factor for impaired systemic and intestinal function, as well as decreased digestive and absorptive capacity after surgery (24). TPN provides nutritional support via central venous catheterization when patients are incapable of absorbing nutrients by the gastrointestinal tract. It can benefit postoperative outcomes in the severely malnourished patients and rapidly improve nitrogen balance and wound healing (25). However, catheter complications and overfeeding were main disadvantages of TPN, which might lead to various infections, hyperglycemia or hyperglycemia, metabolic disorders and even death (26). Therefore, EEN became increasingly recognized and was sometimes regarded as the first-line therapy (27).

We also detected EEN helped to improve bowel function by reducing exhaust time and bowel movement time. Pancreatic cancer patients appear to suffer from a set of micronutrient deficiencies and altered bowel function after PD (28). It has been reasonably inferred that EEN protected bowel function by maintaining gastrointestinal integrity thus preventing villous atrophy, and attenuating the body’s response to stress (29). In vivo studies proved that TPN led to impairment of gut mucosal immunity in mice, while partial EEN was able to reverse TPN-induced bowel function impairment through activation of the JAK1-STAT6 pathway (30). Recently, some researchers also demonstrated that early EEN attenuated experimental colitis by inhibiting p65 activation via regulating the p38/MSK1 pathway, suggesting EEN was effective in the treatment of inflammatory bowel disease (31). However, the underlying mechanism of action on EEN and intestinal barrier function remains still unclear and needs further investigations.

Besides EEN and TPN, other nutrition methods have been developed and applied to reduce the complication rate of pancreatic surgery and to improve life quality in pancreatic cancer patients. A prospective single-center study compared the outcomes between EEN and combined nutrition support (EEN + PN) in patients after PD (40). The rate of discontinuance of enteral feeding was significantly higher in the EEN group, and there was no statistical difference in the frequency of catheter-related infections between the two groups. A recent RCT study tried to evaluate the effectiveness of enteral immunonutrition (EIN) by adding mediators of systemic immunity (interleukin-1α, tumor necrosis factor-α, lymphocytes subsets and complement components) (41). The perioperative administration of EIN rather than EEN was associated with a favorable modulation of inflammatory response and with enhancement of systemic immunity in patients undergoing PD for periampullary cancer. In addition, some investigations also recommended adding omega-3 fatty acids and L-carnitine supplement to prevent severe cachexia and to improve nutritional status (42). Compared to standard EEN and TPN, an enteral formula enriched with omega-3 fatty acids showed better results in term of lower rate of postoperative complications (43). Moreover, early oral feeding after bowel movement has been reported as a clinically safe, feasible and effective method of nutritional support after PD (44). Therefore, patients undergoing pancreatic cancer surgery should receive multidisciplinary nutrition screening and intervention, and the nutrition professionals should be also included in managing these patients in the postoperative period (45).

Some limitations of the present study should be also emphasized. Firstly, this meta-analysis included only 486 patients and 7 RCTs. Some included studies contain relatively small samples (fewer than 20 patients) and remain imbalance of patient number between groups so that deviations may inevitably exist. Secondly, due to the limited data provided by the included studies, we cannot analyze and compare the preoperative data between the groups. Thirdly, some important indices such as prealbumin, transferrin, hemoglobin and immune function are not analyzed due to unavailable data. Fourthly, we cannot perform subgroup analysis according to patient’s gender, age and tumor stage for the lack of relevant information. In addition, the included studies did not mention the enhanced recovery program, which should be also regarded as an important postoperative management. Finally, some uncontrolled factors may interfere with the current analysis. Variables like gender ratio and age range at baseline have not been adjusted. And different managements of surgical process [PD and pylorus-preserving pancreaticoduodenectomy (PPPD)] nasojejunal tube (types, places), and supplemental nutrition may also disturb the accuracy of results.

EEN was better than TPN at improving the nutritional status and bowel function as well as to decreasing complication rate and hospital stay after PD in patients with pancreatic cancer. Novel nutrition support should be also investigated and developed as an adjunctive therapy to pancreatic cancer patients.

The authors thank all participants for their participation.