MicroRNA (miRNA) is a kind of naturally generated and highly conserved small non-coding RNA with a length of about 22 nucleotides, which can interact with 3' untranslation region (UTR) of target mRNA according to sequence complementarity, leading to degradation or translation inhibition of mRNA (6). Meanwhile, miRNA regulates proliferation, invasion and apoptosis of cancer cells in different up or down regulated ways, and also affects the expression of genes involved in signal transduction of cancer cells (7). Let-7d, widely considered to be a tumor suppressor of miRNA, has been found to be highly conserved in many species, including humans (8). Childs et al. found that let-7d was low expressed in head and neck squamous cell carcinoma (HNSCC) patients, and easily led to poor survival(9). Shell et al. demonstrated that loss of let-7d was more likely to result in unfavorable prognosis with the patients in ovarian cancer (10). Similarly, down-regulation of let-7d was also found in other cancers including prostate cancer (11), breast cancer (12), colorectal cancer (13), etc. However, the function of let-7d in rectum adenocarcinoma has not been described.

In this research, we explored that let-7d was down-regulated both in rectum adenocarcinoma tissues and cells. The vitro experiment proved that over-expression of let-7d could suppress the proliferation, invasion and migration of SW837 cells. Then, the direct interaction between let-7d and ATP binding cassette subfamily C member 2 (ABCC2) was confirmed by the dual luciferase assay. Moreover, we found that ABCC2 was highly expressed in patients with rectum adenocarcinoma, and its high expression easily led to worse overall survival. Co-transfection assay testified that silencing ABCC2 suppressed the proliferation, invasion and migration of SW837 cells, meanwhile accentuated the inhibitory effect of let-7d on SW837 cells. Herein, all results of this study showed that let-7d regulated ABCC2 as a crucial modulator in the progression of rectum adenocarcinoma, which may provide a new insight for the treatment of rectum adenocarcinoma.

Rectum adenocarcinoma cell lines SW837 and normal cell line Hs680.Rec were purchased from the Shanghai cell bank of the Chinese academy of medical sciences. All the cells were incubated in Dulbecco’s Eagle medium with 10% fetal bovine serum (FBS), under the condition of 37 °C, 5% CO2. When cells came into the logarithmic phase, the let-7d mimic/mimic NC (RIBOBIO, Guangzhou, China), si-ABCC2 and si-con (Gene-Pharma, Shanghai, China) were transfected into the cells using the Lipofectamine 2000 transfection kit according to the supplier’s protocol. The siRNAs sequences were presented as follows: si-ABCC2: 5'-GCACCATCTTAGAGAAGGGAT-3', si-con: 5'-AATTCTCCGAACGTGTCACGT-3'.

To get the relative RNA expression of let-7d and ABCC2, total RNA was isolated from the transfected cells by TRIzol solution (Invitrogen, Carlsbad, CA, USA) and then qRT-PCR has been taken. Subsequently, the RNA was reverse transcribed into cDNA using SuperScript III reverse transcriptase (Invitrogen; Carlsbad, CA, USA). qRT-PCR was performed using SsoFast™ EvaGreen Supermix (Bio-Rad, Hercules, CA, USA) according to the manufacturer’s procedure and in a real-time thermal cycler: 40 cycles including 95 °C for 5 min, 95 °C for 30 s, and an extension step at 60 °C for 45 s and 72 °C for 30 min; 2−ΔΔCT method was used to measure the relative expression of let-7d and ABCC2, GAPDH was as the internal control and the primer sequences were as follows: let-7(D) F: 5'-UUGGUGUGUUGGAUGAUGGAGU-3', R: 5'-AACGCTTCACGAATTTGCGT-3'. ABCC2: F: 5'-GTTCCAAGGAGAAGCCCACA-3', R: 5'-CCGGTCCACATTCTCTGGAA-3'. GAPDH: F: 5'-GGAGCGAGATCCCTCCAAAAT-3', R: 5’-GGCTGTTGTCATACTTCTCATGG-3'.

The transfected cells were prepared for cell suspension, seeded into 96-well plates at the standard of 1,000 cells per well and cultured in a carbon dioxide incubator. Cell activity was detected at 0 h, 24 h, 48 h and 72 h, added 10 µL of CCK-8 reagent into each well and cultured in 37 °C incubator for 1.5 h before each detection. Using microplate reader (Bio-Rad, Hercules, CA, USA) to evaluate the optical density (OD) value and draw the proliferation curve.

Transwell assay was used to measure the cells migration and invasion abilities. Put the transfected cells into suspension and added it into the upper chamber. Meanwhile, 500 µL of complete medium was filled into the under chamber. Overnight, swabbed remaining cells in upper chamber, washed by PBS, fixed with 4% paraformaldehyde for 30 min, dyed through 0.1% crystal violet for 20 min and captured via microscope. It is worth noting that the upper chamber of the invasive detection needs to be pre-coated with Matrigel (BD Sciences, Franklin Lakes, NJ, USA) while migratory experiment was not. Furthermore, the invasion (1×105) density of inoculated cells was different from migration (5×103).

Dual luciferase report was further confirmed the prediction results from the bioinformatics software, and dual luciferase reporting kit was used with Dual Luciferase™ reporting system. A reporter plasmid wild-type ABCC2 (WT ABCC2) was conducted by inserting pmirGLO Vector (Promega, USA) with ABCC2 sequences, which includes the target site of let-7d. The target site was mutated and inserted to form a negative control for reporter plasmid, which was called mutated-type ABCC2 (MUT ABCC2). The let-7d mimic/NC and vector were co-transfected into the cells through Lipofectamine 2000 transfection kit according to the supplier’s instruction. After 48 h, the proteins in the cells were extracted for luciferase detection. In the end, using a Dual Luciferase™ reporting system to detect the firefly luciferin to Marine luciferin intensity, assess the relative luciferase activity and reflect the effect of let-7d on ABCC2 level.

Let-7d is down-regulated in rectum adenocarcinoma

Let-7d suppresses the proliferation and mobility of rectum adenocarcinoma cells 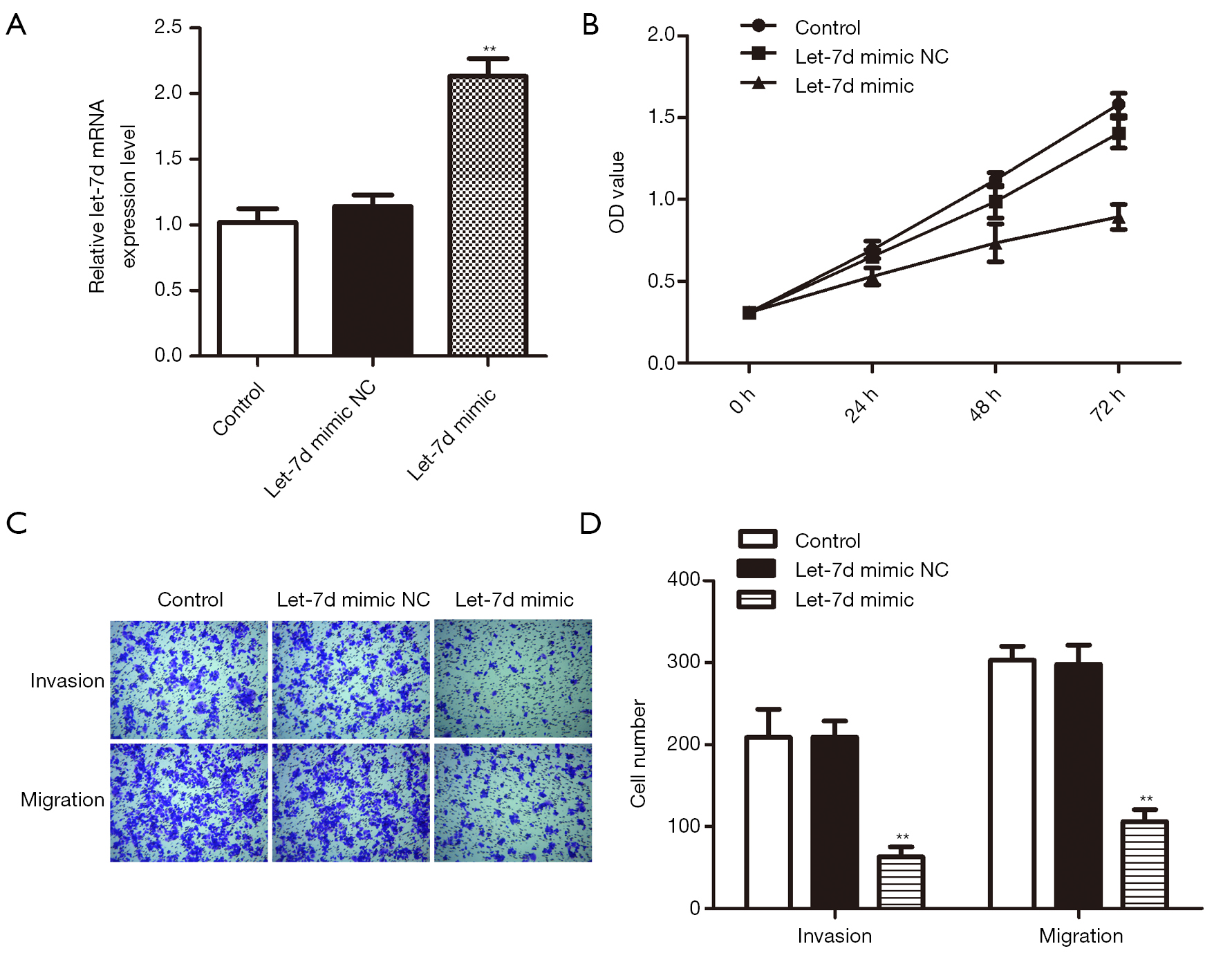 ABCC2 is an immediate target of let-7d

According to research reports, miRNAs performed their function via restraining the expression of their target genes. Therefore, in order to further explore let-7d molecular mechanism, miRNA target analysis tools TargetScan, MiRanda, miRDB and miRWalk were used to predict the possible binding site to ABCC2. As bioinformatics results shown, a diffusely-conserved binding site between 3' UTR of ABCC2 and let-7d was be found and confirmed by luciferase reporter assay in HEK293T cells, meanwhile the mutant ABCC2 sequence was cloned into luciferase reporter vectors (Figure 3A). Subsequently, let-7d mimic and control were transfected into HEK293T cells, compared with the control, we found that the luciferase reporter activity was obviously declined with high-expression of let-7d in WT ABCC2 group. But the luciferase reporter activity was almost unchanged in MUT ABCC2 group (Figure 3B, **P<0.01). Finally, let-7d mimic and si-ABCC2 were transfected into SW837 cells to explore the effect on ABCC2. As the Figure 3C,D,E shown, qRT-PCR and western blot indicated that ABCC2 expression was significantly down-regulated after transfected with let-7d mimic + si-con, si-ABCC2, or let-7d mimic + si-ABCC2 compared with control, especially down-regulated in let-7d mimic + si-ABCC2 group (**P<0.01, #P<0.05, ##P<0.01). Taken together, the findings provided an evident testimony indicating that ABCC2 was a special target of let-7d and negatively regulated by let-7d. 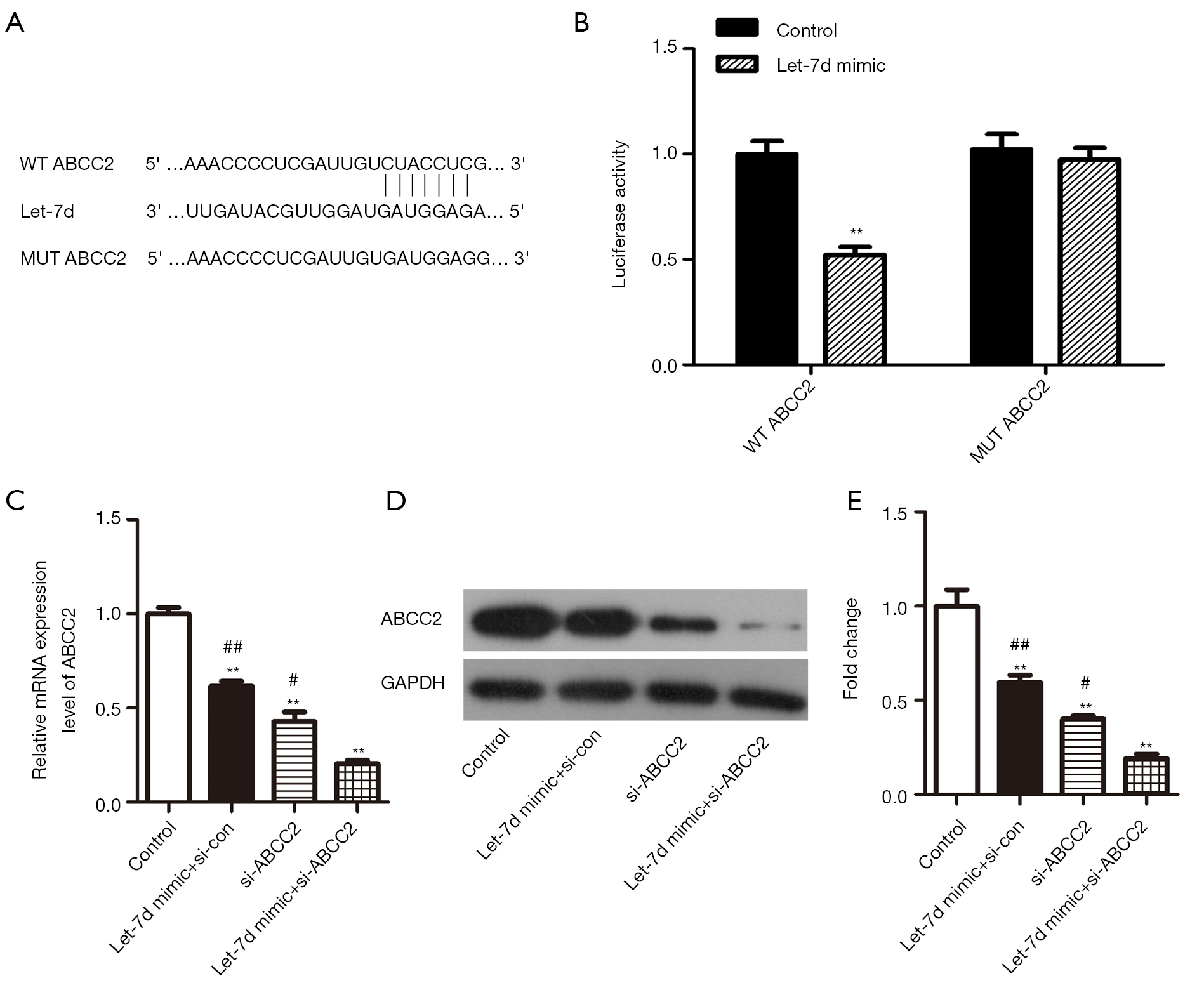 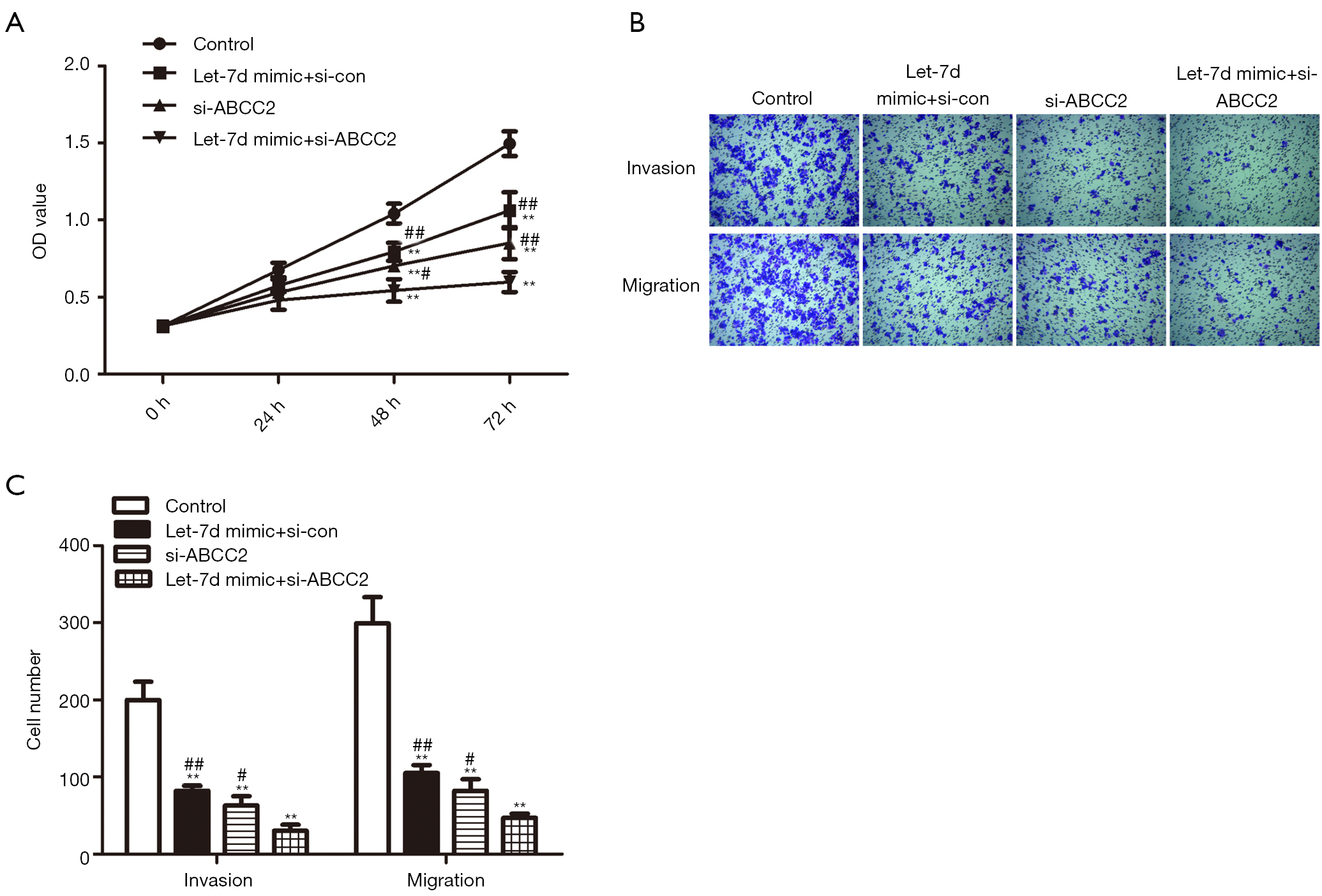 Our data showed that let-7d was down-regulated in rectum adenocarcinoma samples, CCK-8 and transwell assays indicated that over-expression of let-7d positively suppressed SW837 cells proliferation, invasion and migration. We also testified that ABCC2 was a direct functional target of let-7d through prediction software and dual luciferase reporter assay. The analysis from TCGA investigated that ABCC2 was highly expressed in rectum adenocarcinoma tissues and its high expression level tended to poor overall survival. Co-transfection assay found that knockdown ABCC2 could emphasize the inhibitory effect of let-7d on SW837 cells. Taken together, the study indicated that over-expression of let-7d repressed rectum adenocarcinoma progression through targeting with ABCC2.

Emerging evidence pointed that let-7d was down-regulated in numerous cancers and acted as a tumor-inhibiting factor (8). For instance, let-7d was found to be reduced in oral squamous cell carcinoma (14), ovarian cancer (15) and down-regulation of let-7d could suppress proliferation, invasion and migration of renal cell carcinoma (16). These findings were consistent with our research in rectum adenocarcinoma. In our study, we found that let-7d was obviously reduced in rectum adenocarcinoma samples and up-regulation of let-7d could repress SW837 cells proliferation, invasion and migration. Let-7d has been reported to be involved in the pathogenesis of some cancers (17), for example, let-7d was found to have anti-tumor and carcinogenic effects in osteosarcoma (18). In addition, let-7d can also directly target CCL7, COL3A1 (19), HMGA2 and PBX3, and suppress cell proliferation, invasion and metastasis. These evidence not only provide strong supports for the influence of let-7d in rectum adenocarcinoma in our research, but also provide new strategy for the treatment of rectum adenocarcinoma.

The modulation of let-7d by downstream target genes acted as a crucial role in exhibiting its anti-cancer mechanism. Therefore, multiple bioinformatics prediction software was used to analyze the downstream gene of let-7d and confirmed it with dual luciferase reporter assay. The results showed that ABCC2 was a vital downstream target gene of let-7d. ABCC2, as a member of the ATP binding cassette superfamily, also known as multidrug resistance-associated protein 2 (MRP2), encodes human canalicular multi-specific organic anion transporter (20). In addition to being expressed in normal human tissues, ABCC2 was also detected in numerous tumors, including hepatocellular (21), ovarian (22), lung (23), breast (24), gastric (25) and colorectal carcinomas (26). For instance, ABCC2 is also shown to increase cisplatin resistance through targeting let-7c in non-small cell lung cancer (27) and low expression of ABCC2 was related to longer overall survival in ovarian carcinoma (28). While, the function of this gene in rectum adenocarcinoma has been poorly studied. The results exhibited that ABCC2 was over expressed in rectum adenocarcinoma tissues and led to worse prognosis. Meanwhile, the study also found that ABCC2, as the downstream target gene, interacted with let-7d to suppress the rectum adenocarcinoma cells growth and movement.

In conclusion, to the best of our knowledge, this is the first time to discover that let-7d repressed rectum adenocarcinoma development through targeting ABCC2. The study indicated that let-7d was lower expression in rectum adenocarcinoma tissues and cells, and in vitro experiments showed that up-regulation of let-7d could significantly inhibit SW837 cells proliferation, invasion and migration. While, ABCC2 was found highly expressed in rectum adenocarcinoma tissues and easily led to poor prognosis. The potential anti-cancer function of let-7d was mediated by declining the ABCC2 as its target gene. However, every miRNA may regulate many target genes in different ways, affecting the occurrence and progression of cancer, thus more detailed studies on the molecular and cellular mechanism of let-7d target were required.

This study provides a novel insight for the treatment of rectum adenocarcinoma.

Funding: This study was supported by a grant from Early Diagnosis of Colon Cancer and Application of Ganetespib Combined Chemotherapy (2016GSF201131).