Liver cancer, one of the most common cancers, mostly results from hepatitis and cirrhosis. It has high malignancy, low cure rate and poor prognosis with very high mortality. The death rate ranks the second in tumor-related deaths. The occurrence and development of liver cancer seriously harm the health and the quality of life of human (1-3). The pathogenesis of liver cancer is very complicated, which involves many factors such as the regulation of the relevant signaling pathways. Not only that, it also includes cell proliferation, apoptosis, invasion and migration. Primary liver cancer is usually divided into three types: hepatocellular carcinoma, cholangiocarcinoma, and mixed cell carcinoma. It is one of the most lethal cancers today, of which hepatocellular carcinoma accounts for 85–90% (4). Liver cancer is currently treated by surgery, interventional therapy, radiotherapy and chemotherapy, and targeted therapy. However, the current drug treatments are not satisfactory for liver cancer (5,6). Targeted nanodrug delivery system uses new drug loading system to increase the selectivity to the target lesions, thereby increasing the drug concentration in target tissues (7,8). Drug delivery system targeting the tumor cells would deliver more drug to the target cells, reduce the damage to normal cells, and increase the efficacy of drug therapy (9-11).

miRNA, a class of non-coding single strand small molecule RNA, is widely found in multicellular organisms. miRNA has a length of about 20 nucleotides, accounting for about 1% of the total number of human genes, forming regulatory networks that control the life of organisms (12-14).

The miR-21 gene is located on plus strand of chromosome 17q23.2 and is in the tenth intron of the TMEM49 gene. If abnormally expressed, it can promote the growth of hepatoma cells, indicating that miR-21 can affect the occurrence of liver cancer (15). At the same time, miR-21 can regulate target genes to participate in tumor development, such as tumor proliferation, apoptosis, invasion and metastasis. At the present stage, liver cancers are mainly treated with surgery, interventional therapy, radiotherapy and chemotherapy, as well as targeted therapy. However, the overall outcomes have been unsatisfactory and prognosis is still poor (16).

The targeted drug delivery using nano-sized liposomes is a new drug delivery approach. Studies have shown that this approach increases the targeting ability of the drugs to be delivered, thus the drug concentration in the targeted lesion or targeted cells, yielding improved therapeutic effect (6,17). In this study, we aimed to investigate the effect of miR-21mimics and liposome-loaded drug (nanodrug) on liver cancer using cell line SMCC-7721. The treated cells were investigated for cell cycle arrest and apoptosis, as well as the expression of apoptosis-related proteins. The findings would provide clues for targeted treatment of liver cancer.

c[RGDyk]-coated liposome loaded with adriamycin (nanodrug) was prepared as described previously (18) and miR-21 mimics was synthesized at Sangon Biotech, Shanghai, China. Cells were treated with 0 to 10 µL nanodrug/well at five concentrations (2.5 to 20 mol/L) and harvested 24, 48 and 72 h after for viability tests. For transfection, cells were grown to a confluency of 90% in RPMI 1640 medium and transfected with 125 µL Opti-MEM and 5 µL lipofectamine 3000 containing miRNA mimics or empty vector according to manufacturer’s protocols. Two h later, the transfected cells were treated with nanodrug for 72 h. Un-treated cells were used as control.

For cell cycle analysis, cells were suspended in PBS and added with DNA staining solution. After incubated at room temperature for 10 min, the cells were analyzed using a flow cytometer. For apoptosis detection, SMMC-7721 cells were harvested and washed in pre-chilled PBS twice, suspended in apoptosis positive control solution and incubated on ice for 30 min according to the manufacturer’s instructions. The cells were labeled with Annexin V and V-FITC following the manufacturer’s instructions and loaded onto flow cytometer to assess the apoptotic cells. The quantitation of apoptotic cells was calculated by CellQuest software (Becton Dickinson).

Total RNA was isolated from SMMC-7721 cells using ultrapure RNA extraction kit according to manufacturer’s recommendations. The RNA was quantified and reversely transcripted using HiFiScript cDNA synthesis kit based on manufacturer’s recommendations. The resulting cDNA was subjected to amplification using UltraSYBR Mixture (Applied Biosystems) in a total volume of 12 µL on CFX Connect™ PCR system. The cycling conditions were 50 °C for 2 min, 95 °C for 10 min followed by 40 cycles, each one consisting of 15 s at 95 °C and 1 min at 60 °C using the primers listed in Table 1. GAPDH was used as internal control. Samples were run in triplicate and the mean value was calculated for each case. The data were analyzed using the Applied Biosystems software RQ Manager v1.2.1. Relative expression was calculated by using comparative Ct method and obtaining the fold change value (2−ΔΔCt) according to previously described protocol (19). 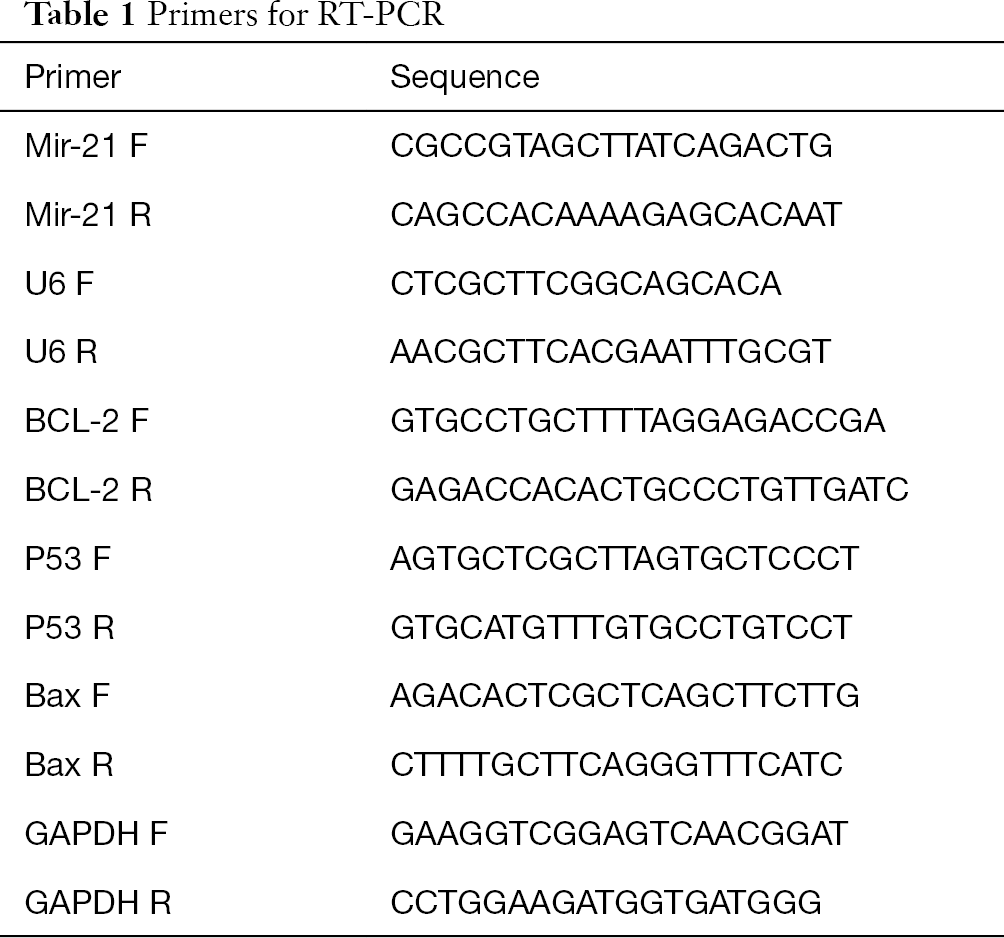 All data were expressed as means ± standard error of the mean (SEM) obtained from at least three independent experiments. Statistical comparisons between experimental and control groups were assessed by using the Student’s t-test. P<0.05 was considered statistically significant.

Effect of drug concentration and exposure time on cell viability

We first determined the effect of drug concentration on cell viability. As shown in Figure 1A, the viability of SMMC-7721 cells declined significantly when 2.5 µL nanodrug (at 1 mol/L) was added to the culture well. However, the viability did not reduce further as the amount added increased to 20 µL/well. Therefore, we choose to use 5 µL/well in subsequent study.

Figure 1 Effect of drug concentration (A) and exposure time at 5 mol/L (B) on the viability of SMMC-7721 cells. * denotes significantly difference vs. control (0 µL/well or 0 h).

We then tested the impact of exposure time on the viability of SMMC-7721 cells. Measurements showed that within 72 h, the viability was not affected by the exposure time (Figure 1B). Therefore, in subsequent experiments, the cells were exposed to the drugs for 72 h. 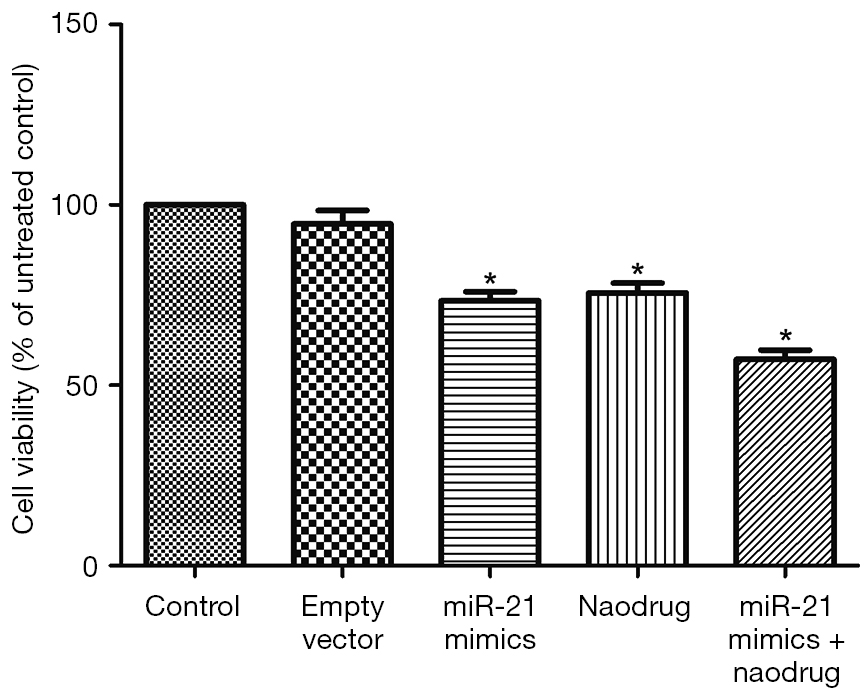 Figure 2 Viability of SMMC-7721 cells after single and combined treatments of nanodrug and miR-21mimics. * denotes significantly difference vs. control. 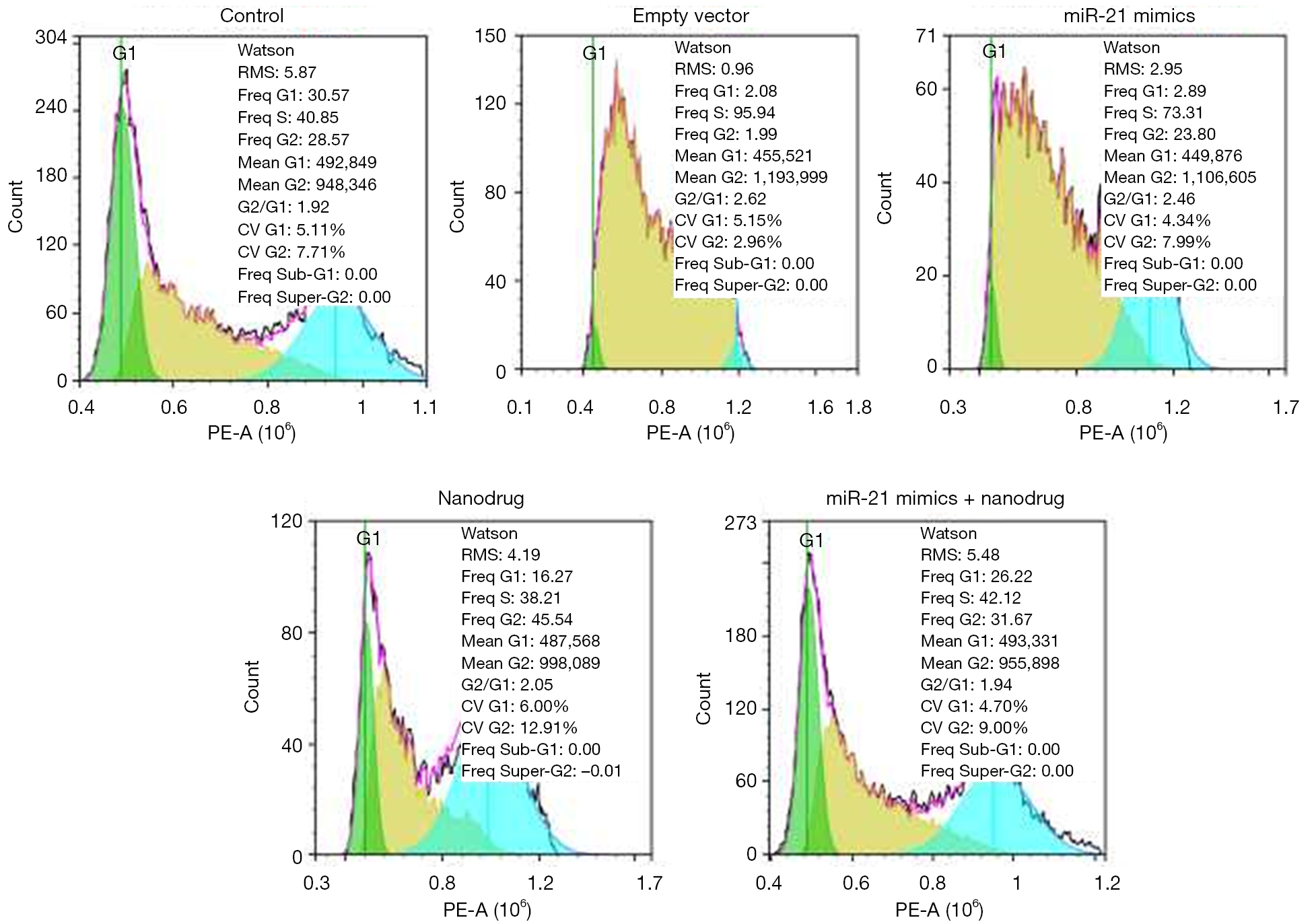 Figure 3 Cell cycle analysis of SMMC-7721 cells after single and combined treatments of nanodrug and miR-21mimics.

RT-PCR analysis showed that compared with the control, the expression of Bax and p53 in cells treated with nanodrug, miR-21 mimics + nanodrug and miR-21 mimics was significantly up-regulated, while that of Bcl-2 was significantly down-regulated at mRNA level (Figure 4). Similar changes were observed at protein levels for these genes (Figures 5,6). Meanwhile, miR-21 levels were increased after the cells were transfected with miR-21 mimics (Figure 5).

Figure 4 Apoptosis of SMMC-7721 cells after single and combined treatments of nanodrug and miR-21mimics. (A) Flow cytometry; (B) apoptotic rate. * denotes significantly difference vs. control. 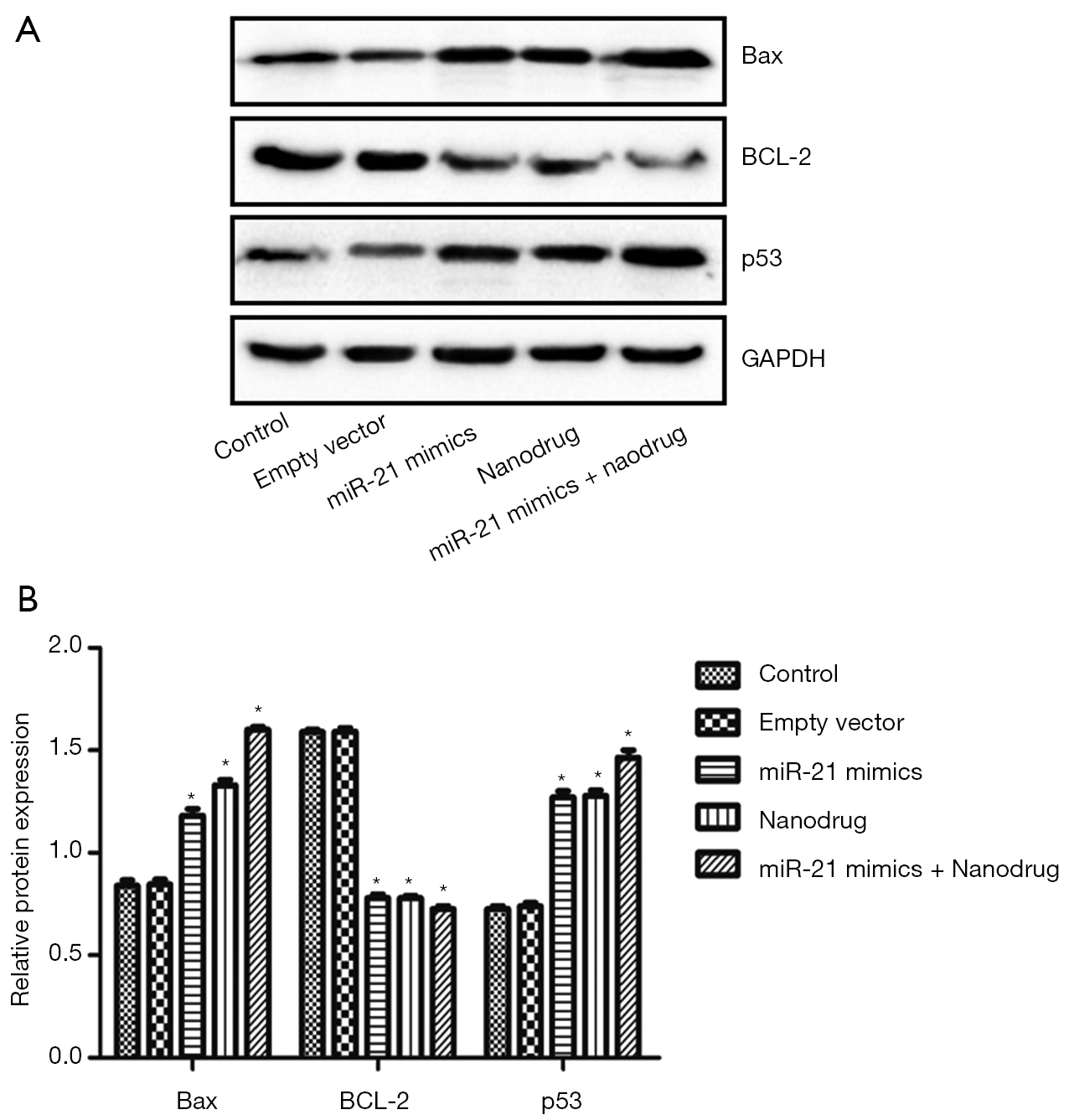 Figure 6 Protein level of Bax, P53 and BCL-2 in SMMC-7721 cells after single and combined treatments of nanodrug and miR-21mimics. (A) Representative Western blots; (B) relative protein level. * denotes significantly difference vs. control

Studies have shown that miRNAs are often abnormally expressed in cancer and play regulatory role on the expression of tumor-related genes and the occurrence, development and prognosis of tumor (20). miRNAs not only act as a proto oncogene, but also act as a tumor suppressors to regulate the related biological functions (21). For example, Gabriely et al. found that in glioma cells miR-21 participates in the regulation of invasion, migration. It regulates the expression of apoptosis-related genes, including TIMP3, BECK, and MMPs. MiR-21 downregulates the suppressor of MMPs, resulting activated MMPs to promote cell invasion and increase the malignancy of tumor (22). Data also show that miR-21 regulates Bcl-2 and other related genes in breast cancer, affecting the occurrence and development of tumors. In metastatic breast cancer cells, miR-21 inhibits the expression of PDCD4, TPM 1 and Maspin genes to impact tumor invasion and metastasis (23). Meng et al. found that the inhibition of miR-21 in hepatoma cells increases the expression of the PTEN gene, affecting the proliferation, migration and invasion of the tumor cells (15). MiRNA-21 is highly expressed in most tumors, such as gastric cancer (24), myeloma (25) and liver cancer (26).

In this study, we exposed hepatoma cells to nanodrug or transfected them with miR-21 mimics. The findings show that these treatments reduced the viability and increased the apoptosis of treated cells. At molecular level, Bax and p53 expression was upregulated and Bcl-2 expression was down-regulated. Bax, p53 and Bcl-2 are all apoptosis-related proteins. p53 directly regulates the expression of Bcl-2 and Bax is considered to be an apoptosis-promoting gene that induces apoptosis of tumor cells (11). Therefore, our findings suggest that miR-21 suppresses the growth of liver cancer cells via regulating the expression of apoptosis-related proteins and use of nanodrug and miR-21 may potentially offer new therapeutic options.

Apoptotic process is regulated by many genes in cells. Bcl-2 gene family is the most important family of apoptotic regulatory genes (27). It is closely related to apoptosis and is the most important gene to inhibit apoptosis of cancer cells. In addition to Bcl-2 gene, the Bcl-2 gene family also has Bax gene, which is an apoptotic promoter gene and plays an important role in the process of apoptosis. The ratio of Bax gene to Bcl-2 gene is an important factor determining apoptosis (28). Bax gene and Bcl-2 gene are the most representative anti-apoptotic and pro-apoptotic genes in Bcl-2 family, respectively. Bcl-2 is an important proto-oncogene encoding a protein with a relative molecular weight of 2500. Bax is one of the most widely studied apoptotic proteins in the Bcl-2 family. It can form heterodimer with Bcl-2 or homologous dimer itself. Bax is highly expressed in many apoptotic cells. Studies have confirmed that high expression of Bcl-2 inhibits the apoptosis induced by many factors. Increased expression of Bax induces cell apoptosis by inhibiting the activity of Bcl-2 (29). In addition, it is reported that the ratio of Bax to Bcl-2, rather than Bcl-2 alone, plays a decisive role in drug-induced apoptosis (30). More than 50% of human tumors are related to P53 mutations. P53 is the most closely related gene to human tumors. Different tumors have different mutation sites, showing the specificity of mutation (31). Mutational diversity exists even in different individuals of the same tumor. The point mutation rate of P53 gene in primary liver cancer was 25–60% (32).

Since this is an in vitro study and used only one cell line, these findings need to be further validated in vivo with more cell lines, particularly with non-tumorogenic hepatic cell line to demonstrate their specificity.

Funding: This study was supported by Priority Research Funds of Jiangxi, China (grant no. 20161ACG70016).