Glioma is one of the most general malignant primary intracranial tumors in adults worldwide and brings a huge threat to public health (1). Five cases per 100,000 persons are newly diagnosed of glioma annually. Although great progress has been made in the therapeutic treatment in the past decades, the mortality rate remains high in glioma patients worldwide. The median survival rate of glioma patients is approximately 15 months, which is the poorest five-year survival rate among all cancers (2,3). Therefore, it is extremely urgent to uncover new mechanisms underlying the development of glioma and find out potential therapeutic targets for human glioma.

Noncoding RNA accounts for more than 98% of all the sequences. As one subtype of noncoding RNA, long noncoding RNAs (lncRNAs) participate in a number of cellular processes and pathways during the development of tumorigenesis. For instance, overexpression of lincRNA-p21 represses cell proliferation in gastric cancer and increases cell sensitivity of radiotherapy through regulation of the beta-catenin signaling pathway (4). LncRNA-CCHE1 expression is positively related to the malignancy of colorectal carcinoma via regulation of ERK/COX-2 pathway (5). Downregulation of lncRNA linc-ITGB1 inhibits cell invasion, cell migration and epithelial-mesenchymal transition in non-small cell lung cancer through decreasing Snail expression (6). Activated by ZEB1, lncRNA HCCL5 accelerates cell viability, cell migration, epithelial-mesenchymal transition and the malignancy of hepatocellular carcinoma (7). Moreover, through the modulation of OIP5 expression, lncRNA OIP5-AS1 promotes cell proliferation and inhibits cell apoptosis in bladder cancer (8). However, the role of lncRNA LINC00052 in the progression of glioma remains unexplored. In this study, we found out that the expression level of LINC00052 was remarkably downregulated in glioma samples. Moreover, experiments revealed that LINC00052 depressed cell proliferation, invasion and migration in glioma. Furthermore, we discovered that LINC00052 played its function in glioma by downregulating insulin-like growth factor 2 (IGF2).

TRIzol reagent (Invitrogen) was utilized to isolate total RNA from tissues and cells for both mRNA analyses. SYBR green (Roche, Switzerland) was conducted to measure the relative expression levels between LINC00052 and IGF2 mRNA. Moreover, the expressions were normalized to the level of β-actin mRNA. RT-qPCR analyses were conducted in triplicate. The primers were used as following: LINC00052, forwards 5'-CCTATCCCTTTCTCTAAGAA-3' and reverse 5'-ACTTCTGCAAAAACGTGCTG-3'; β-actin, forward 5'-GATGGAAATCGTCAGAGGCT-3' and reverse 5'-TGGCACTTAGTTGGAAATGC-3'. The thermal cycle was as follows: 30 sec at 95 °C, 5 sec for 40 cycles at 95 °C, 35 sec at 60 °C. The relative expression was calculated by performing 2−△△CT method.

Cells, transferred into 6-well plates, were cultured in DMEM medium overnight. After scratched with a plastic tip, cells were cultured in serum-free DMEM. After 48 h, wound closure was viewed. Each assay was repeated for three times independently.

These treated cells were transformed to the top of Matrigel-coated invasion chambers (24-well insert, 8-lm pore size; BD Biosciences) with 200 µL serum-free DMEM. And the bottom chamber was added with DMEM and FBS as a chemoattractant. After being incubated for 48 h, non-invading cells were removed from the inner part of the insert by cotton swab. After being fixed in 4% formaldehyde, cells on the lower membrane surface were stained with 0.1% crystal violet. The microscope was used to manually count invading cells in three randomly-chosen fields and take pictures.

SPSS 13.0 (SPSS Inc., Chicago, IL, USA) was utilized to conduct the statistical analysis. Two-tailed Student’s t-test was performed to analyze the significance. When P<0.05, the data were considered statistically significant.

LINC00052 in glioma tissues and cells

First, RT-qPCR was conducted for detecting LINC00052 expression in 40 patients’ tissues and 4 glioma cells. As the result, LINC00052 was significantly downregulated in 40 glioma patients’ tissue samples than that in 10 normal brain tissues (glioma tissues 1.13±0.63; normal brain tissues 4.86±0.93; Figure 1A). Besides, LINC00052 level was significantly lower in glioma cells than that in normal human astrocyte 1800 cell line (Figure 1B).

Figure 2 Overexpression of LINC00052 inhibited glioma cell proliferation. (A) LINC00052 expression in glioma cells transduced with empty vector or LINC00052 lentivirus (LINC00052) was detected by RT-qPCR. β-actin was used as an internal control. (B) CCK8 assay showed that overexpression of LINC00052 significantly repressed cell proliferation in SHG44 glioma cells. The results represent the average of three independent experiments (mean ± standard error of the mean). *P<0.05, as compared with the control cells. *P<0.05. 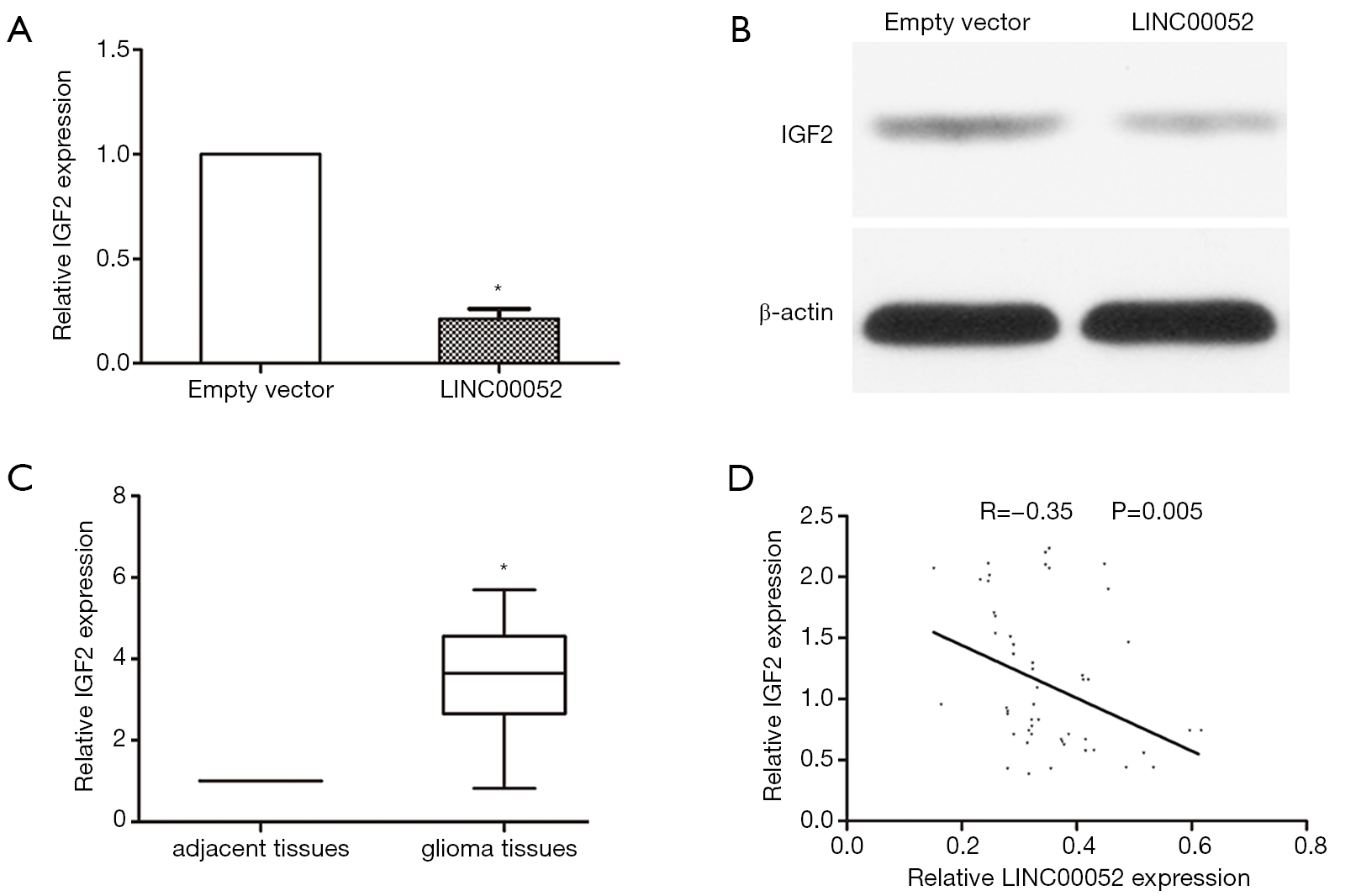 Figure 4 Interaction between IGF2 and LINC00052 in glioma. (A) The RNA expression level of IGF2 in LINC00052 cells was significantly decreased compared with empty control cells in SHG44 cells; (B) protein expression of IGF2 was decreased after overexpression of LINC00052 in SHG44 cells; (C) IGF2 was significantly upregulated in glioma tissues compared with normal brain tissues; (D) the linear correlation between the expression level of IGF2 and LINC00052 in glioma tissues. The results represent the average of three independent experiments Data are presented as the mean ± standard error of the mean. *P<0.05.

LncRNAs have been reported to participate in the regulation of glioma development. For example, lncRNA ATB promotes cell migration and cell invasion in glioma by suppressing miR-2043p (9). LncRNA HOXD-AS2 facilitates the progression of glioma by regulating cell cycle and may be a potential diagnostic biomarker and therapeutic target for glioma (10). Silence of lncRNA OIP5-AS1 upregulates miR-410 and further inhibits cell proliferation, cell migration and promotes cell apoptosis in glioma by blocking the Wnt-7b/beta-catenin pathway (11). In addition, lncRNA MEG3 depresses cell proliferation and cell invasion, and induces autophagy in glioma by regulating Sirt7 and PI3K/AKT/mTOR pathway (12).

Recent researches have indicated that LINC00052 plays an important role in tumorigenesis in several cancers. For instance, LINC00052 depresses cell migration and cell invasion in hepatocellular carcinoma by upregulation of EPB41L3 (13). LINC00052 acts as an oncogene in gastric cancer by promoting cell proliferation and cell metastasis through activation of Wnt/beta-Catenin signaling pathway (14). In addition, upregulation of LINC00052 enhances the progression of breast cancer by HER3-mediated downstream signaling (15). Our study showed that the expression of LINC00052 was decreased in both glioma tissue and cells. Furthermore, after LINC00052 was overexpressed, the glioma cell growth, migration and invasion was suppressed. These data indicate that LINC00052 functions as a tumor suppressor and inhibits the development and metastasis of glioma.

IGF2, as a member of the IGF/insulin signaling pathway, possesses the capacities of anti-apoptosis and mitosis which is widely identified to be involved in modulation of tumor development and metastasis. For example, overexpression of IGF2 is remarkably correlated with the sensitivity of colorectal cancer tumor to BI 885578 (16). Curcumin functions as a tumor suppressor in the development of urothelial tumor through depressing IGF2 expression and IGF2-mediated AKT/mTOR pathway (17). LncRNA 91H enhances aggressive phenotype of breast cancer cells and upregulates the expression of H19/IGF2 (18). Moreover, high expression of IGF-2 takes part in angiogenesis in invasive bladder cancer and is associated with poor prognosis of patient (19). In our experiment, IGF2 was downregulated after LINC00052 was overexpressed in vitro. What’s more, IGF2 expression was remarkably upregulated in glioma samples compared with that in normal brain tissues. Moreover, negative correlation was discovered between IGF2 and LINC00052 expression in glioma tissues. The results above reveal that LINC00052 may realize its function in glioma progression via downregulating IGF2.

Our research suggests that LINC00052 is vital in the carcinogenesis of glioma and can be served as a promising biomarker for glioma. The mechanism between LINC00052 and IGF2 in glioma needs our further research.

Ethical Statement: Written informed consent was offered by every glioma patient before the surgery. This study was ratified as the Ethics Committee of Qingdao municipal hospital required. The authors are accountable for all aspects of the work in ensuring that questions related to the accuracy or integrity of any part of the work are appropriately investigated and resolved.