One-quarter of all cancer deaths are due to lung cancer, while non-small cell lung cancer (NSCLC) accounts for 85–90% of total pulmonary malignancies (1). Although great progress has been made in targeted therapy and immunotherapy, the platinum-based chemotherapy is still the cornerstone of NSCLC treatment. However, chemoresistance has never been overcome and molecular indicators are urgently needed for prediction of chemotherapy response. Previous studies have shown that DNA damage repair is an important pathway leading to platinum-based chemotherapy resistance (2). Recently, our group reported that Jumonji domain containing 5 (JMJD5) regulates gene transcription through clipping of monomethylated histone H3 N-tail under DNA damaging stress (3), which suggested a potential role of JMJD5 in chemoresistance.

JMJD5, also known as KDM8, was reported to be responsible for gene transcription regulation through its enzymatic activity towards H3K36me2 (4-6) and to regulate osteoclastogenesis with its hydroxylase activity (7). Despite the controversy exists on its demethylase activity (8,9), JMJD5 plays a crucial role in embryonic development (4,10,11), circadian rhythms (12), cell-cycle progression (13-15), and also in tumor genesis (5,16-20). Down-regulation of JMJD5 suppresses metastasis and induces apoptosis in oral squamous cell carcinoma by regulating p53/NF-κB pathway (20). JMJD5 was also reported as a dual coactivator of AR and PKM2 integrates AR/EZH2 network and tumor metabolism in castration-resistant prostate cancer (21). Chromatin immunoprecipitation assays revealed that JMJD5 regulated cyclin A1 transcription through directly remove the methyl group of H3K36me2 on its coding region and thus promoted cancer cell proliferation (5). JMJD5 was also found interacted with p53 DNA-binding domain (DBD) and negatively regulated its activities in cell cycle and proliferation (14). Additionally, JMJD5 interacts with pyruvate kinase muscle isozyme (PKM)2 and regulates its nuclear translocation. The interaction between JMJD5 and PKM2 promotes hypoxia inducible factor (HIF)-1α-mediated glucose metabolism, a proverbial metabolic way which generates energy for cancer cells to meet their rapid growth demands (22). This might explain why JMJD5 was found overexpressed in several types of cancer (5) and was positively related to a poor survival outcome in breast cancer (17) and colon cancer (16).

Recent study reported that JMJD5 functioned in mitosis progression and depletion of JMJD5 resulted in significant mitotic arrest and spindle assembly defects (15). The same team also demonstrated that depletion of JMJD5 sensitized tumor cells to microtubule-destabilizing agents, such as vincristine and colchicine, by altering microtubule stability and promoted tumor cell apoptosis (18). In a word, all those results implicated JMJD5 as a potential oncogene. However, in hepatocellular carcinoma (HCC) pathogenesis, JMJD5 seems to be a tumor suppressor gene, since silence of JMJD5 down regulates CDKN1A transcription and promotes HCC cell proliferation (19). The diverse outcomes implicated JMJD5 may play inverse roles in the context of different carcinoma types. To our knowledge, the role of JMJD5 expression in NSCLC has not been demonstrated. In this study, we illustrated JMJD5 as a predictive marker which indicated a poor survival outcome in NSCLC patients who received platinum-based chemotherapy.

In this retrospective study, NSCLC patients who received platinum-based chemotherapy after surgery at Zhejiang Cancer Hospital (Hangzhou, China) between July 2011 and October 2012 were screened. Only patients with primary NSCLC tumor were included. This study was approved by the Ethics Committee of Zhejiang Cancer Hospital. Tumor tissues were collected from the department of tumor tissue bank of Zhejiang Cancer Hospital, China. TNM stages were determined according to the 7th edition of the international staging system (23). Computed tomography (CT), ultrasonography, magnetic resonance imaging (MRI), and chest radiography were reviewed to evaluate disease recurrence status. Follow-up work was done through telephone. The ultimate follow-up time was up to May 20th, 2019.

JMJD5 expression in both tumor and normal tissues of the same lung cancer samples were determined by IHC staining. In brief, formalin fixed paraffin-embedded (FFPE) tumor tissues were cut into a series of 5µm thick sections. The sections were de-paraffinized and rehydrated. Antigen retrieval was achieved using Dako EnVisionTM FLEX Target Retrieval Solution (pH 9.0) in the Dako PT Link units at 95 °C for 20 minutes. Thereafter, each section was incubated with the anti-JMJD5 antibody in 1:100 (Rabbit polyclonal antibody, ab83011, Abcam) for 2 hours at room temperature. Followed by incubation with secondary antibody (PV-9000, Zhongshan Jinqiao Biotechnology Co. Ltd., Beijing, China) at room temperature for 30 minutes. Finally, the sections were colorized by 3,3'-diaminobenzamine and hematoxylin, respectively for immune complex and nuclei staining.

The SPSS software for Windows (Version 17.0, SPSS, Inc., Chicago, IL, USA) was used for statistical analyses. Overall survival time (OS) and progression-free survival time (PFS) were defined as the months between surgery date to death date or disease progression date, respectively. Survival curves were presented by the Kaplan-Meier method and P value was acquired using the log-rank test. Multivariate analysis for JMJD5 and other potential prognostic variables (including gender, TNM stage, tumor differentiation status) was tested by Cox proportional-hazards regression method. Chi-squared (χ2) and Fisher’s exact tests were used to evaluate the baseline of JMJD5 expression in different clinicopathological groups. For all tests, P values were two-sided and P<0.05 was considered statistically significant. 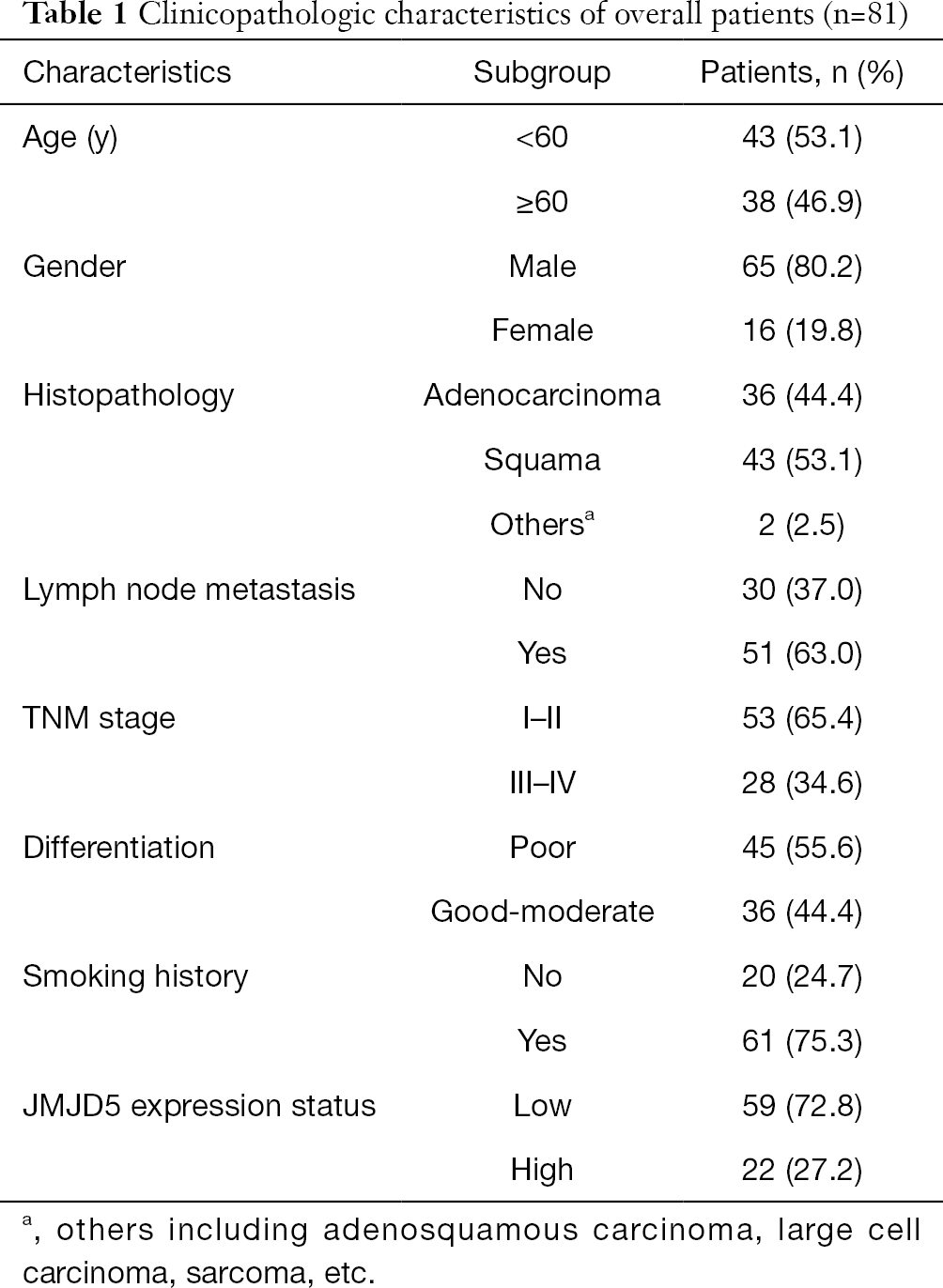 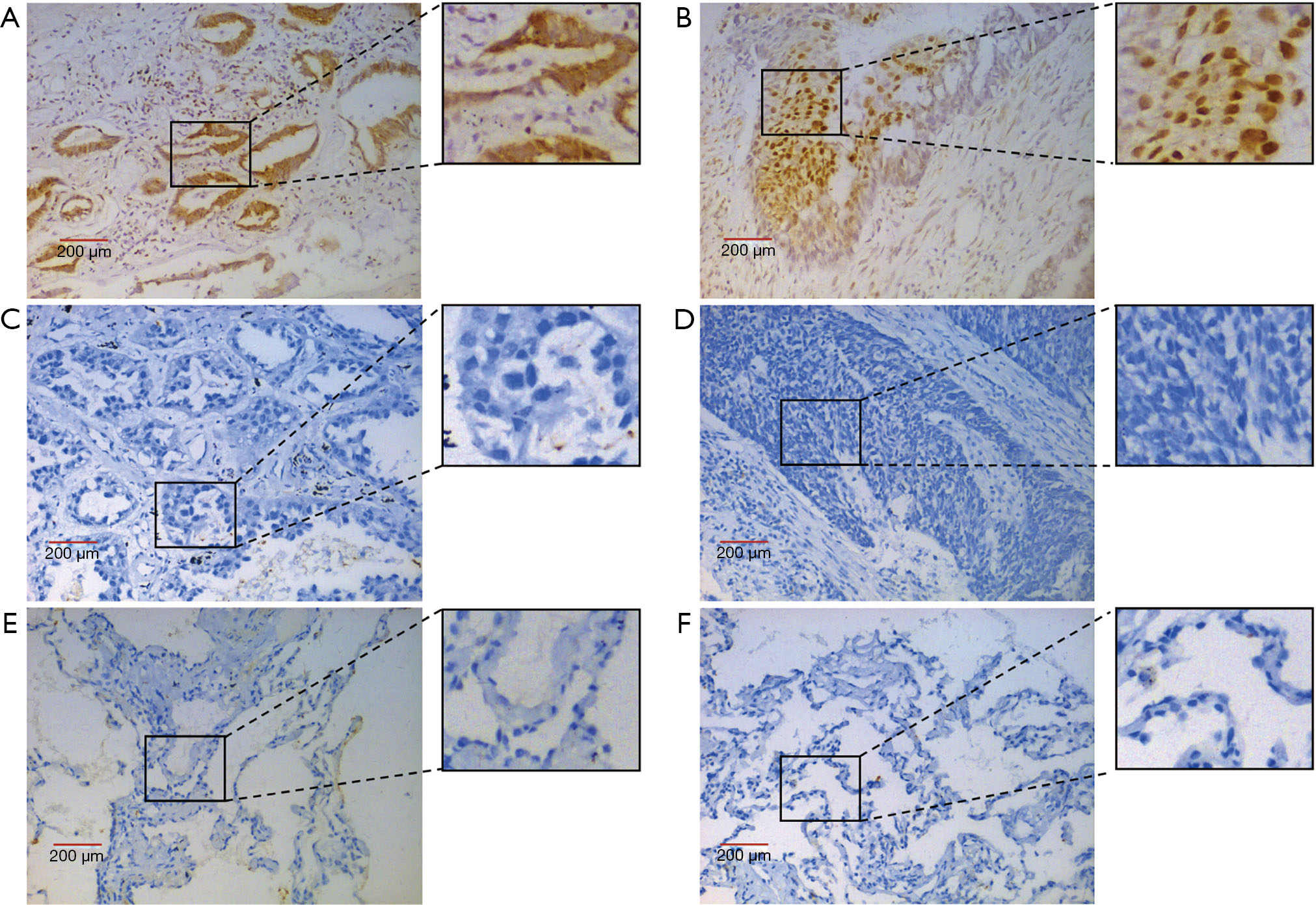 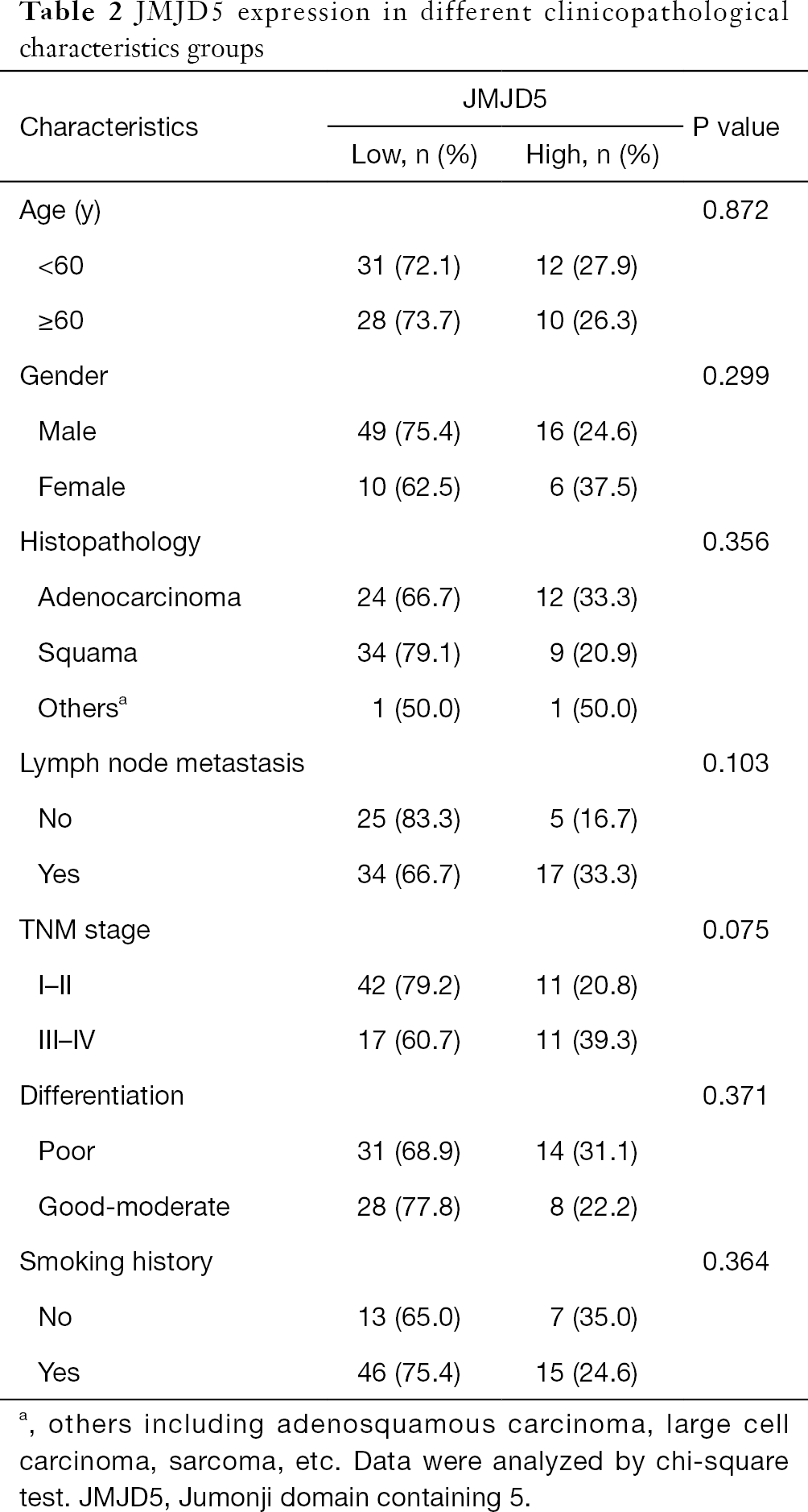 We then evaluated the correlation between JMJD5 expression and patients’ survival outcomes using Kaplan-Meier method. Results showed in Figure 2 revealed that high JMJD5 expression indicated both shorter OS [HR =2.881 (1.774–9.121), P=0.001] and PFS [HR =2.255 (1.417–5.886), P=0.004]. To further elucidate whether JMJD5 is an independent prognostic factor, univariate and multivariate analysis were performed by Cox proportional hazards analyses and results are showed in Table 3. For univariate analysis, besides JMJD5, gender, histopathology and TNM stage were also indicators for shorter PFS, while only TNM stage was another indicator for shorter OS. For multivariate analysis, only JMJD5 (for PFS, P=0.025; for OS, P=0.018) and advanced disease stage (for PFS, P=0.007; for OS, P=0.017) were independent prognostic factors for PFS and OS. 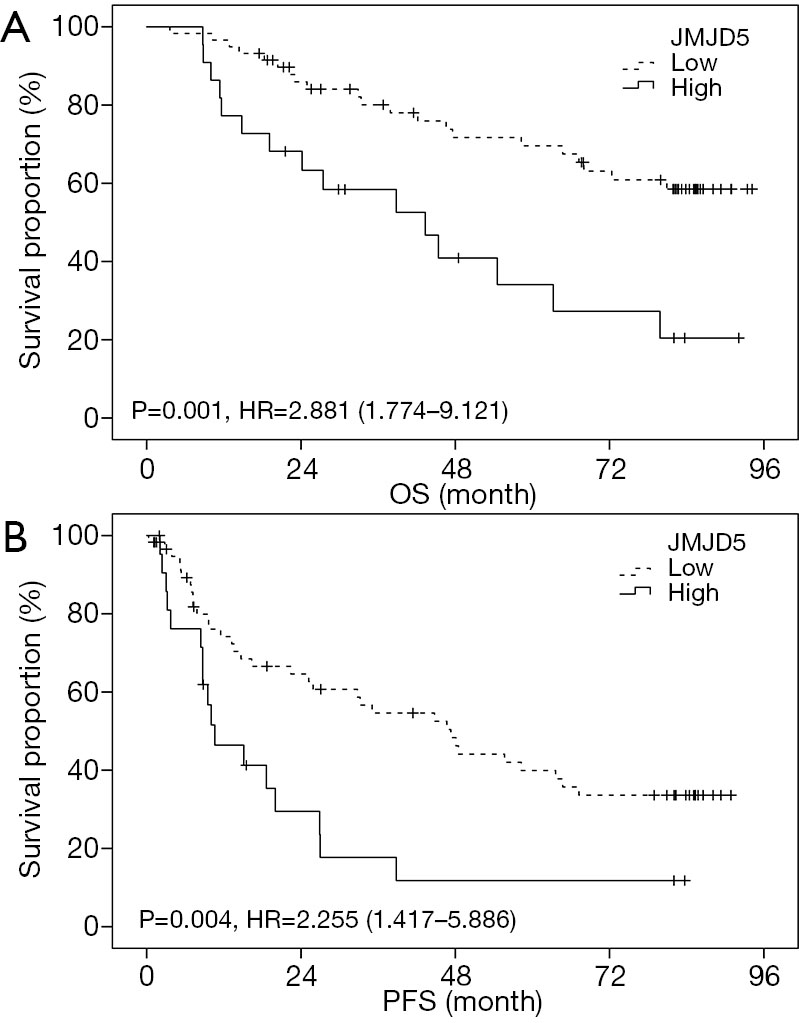 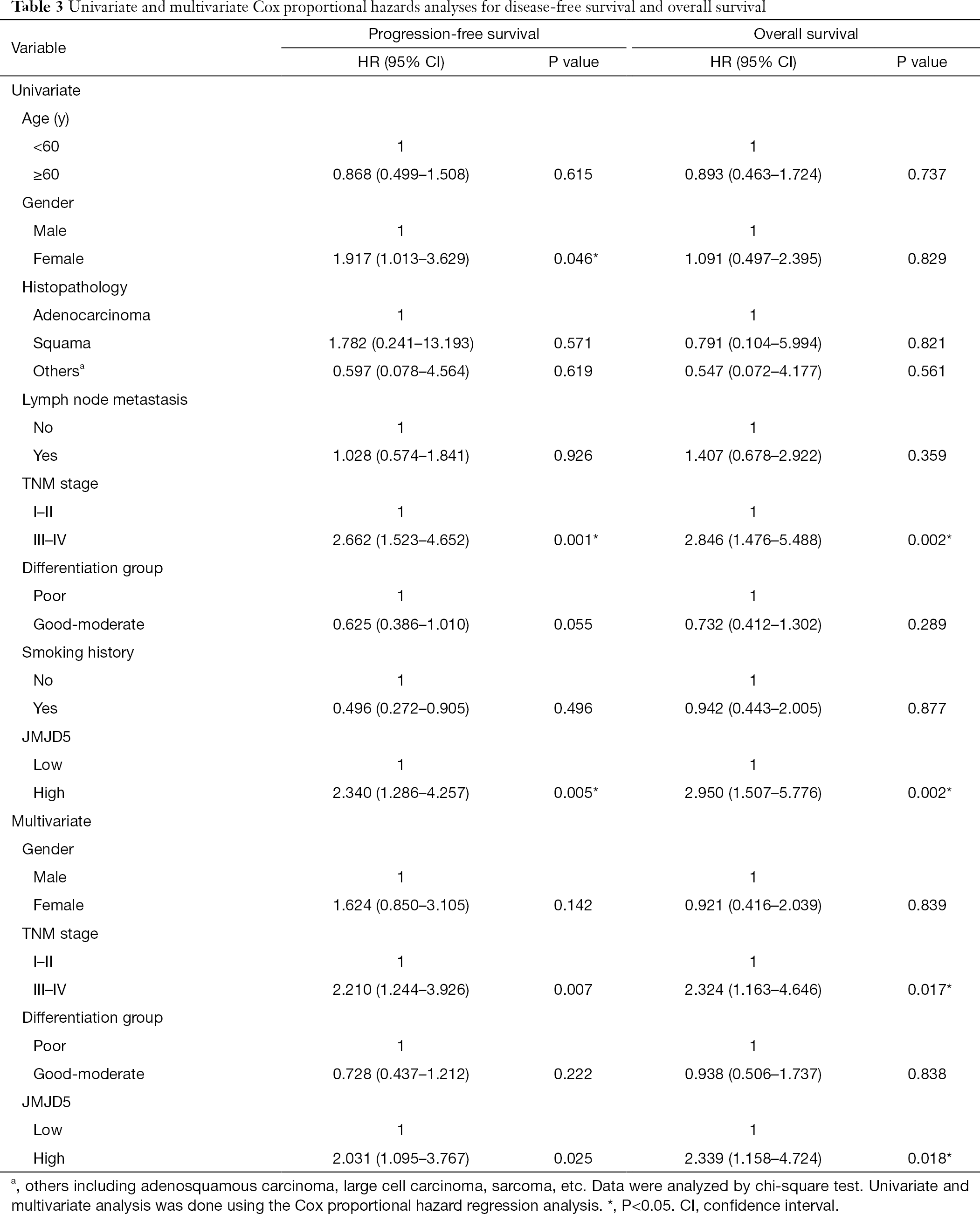 The predictive role of JMJD5 is the same in different subgroup

The results above implicated JMJD5 as an oncogene and a potential predictive biomarker for NSCLC. To further clarify the advantage population for JMJD5 to predict outcomes, a series of subgroup analyses were performed according to patients’ clinicopathological characteristics including age, gender, pathology, differentiation status, lymphatic metastasis, tumor stages and smoking history. Results were shown in Figure 3. No significant difference in HR were found in subgroup analyses (all P values are >0.05), which suggested there was no significant difference in the predictive effect of JMJD5 in each subgroup.

In this study, we reported higher JMJD5 expression indicating poor OS and PFS in NSCLC patients who received platinum-based chemotherapy. However, its molecular mechanism has not been well demonstrated. Our previous study revealed that JMJD5 regulates gene transcription via proteolytically clips monomethylated histone H3 under DNA damage stress. This could be one of the pathways which lead to chemoresistance. Despite the controversy on the epigenetic function of JMJD5 as demethylase or hydroxylase (8,9), important roles of JMJD5 in tumorigenesis and progression have already been implicated (5,16-19). Besides, its regulatory capacity including cell cycle regulation (14,15), glucose metabolism (21), and p53 regulation (14,24), all support its potential to promote cancer cell proliferation (5). In breast cancer (17,20) and colon cancer (16), JMJD5 expression was suggested as a worse prognostic factor. However, results in HCC pathogenesis was reversed, JMJD5 seemed to be a tumor suppressor gene (19). It may implicate that JMJD5 plays complicated roles in the context of different carcinoma types, while the role of JMJD5 in NSCLC is remain unclear. He et al. reported that JMJD5 interacted with spindle microtubules (15) and depletion of JMJD5 sensitized tumor cells to microtubule-destabilizing agents like vincristine (18), suggested a potential role of JMJD5 in chemoresistance. In this study, we demonstrated the predicting role of JMJD5 in survival outcome of chemotherapy in NSCLC.

No baseline differences of JMJD5 expression were found in subpopulation with various clinicopathologic characters. Survival analysis showed high JMJD5 expression was associated with a shorter OS and PFS. Multivariate analysis recognized that JMJD5 was an independent prognostic factor for both PFS and OS. In addition, subgroup analyses showed that no significant differences were found in the predictive effect of JMJD5 in subgroup population.

Moreover, recent study showed that JMJD5 was associated with the chemosensitivities of microtubule-targeting agents (18). Since navelbine and paclitaxel, the typical microtubule-targeting agents, were routinely used with platinum as first-line chemotherapy recommendation for NSCLC treatment, we are interested in whether the association between JMJD5 and chemosensitivities varies within patients received different chemotherapy regimens. However, as the sample size was limited, subgroup analysis with chemotherapy regimens was failed to be carried out in this study but would be illustrated in our following study.

JMJD5 was implied to be a prognostic marker for NSCLC patients who received platinum-based chemotherapy.

Ethical Statement: The authors are accountable for all aspects of the work in ensuring that questions related to the accuracy or integrity of any part of the work are appropriately investigated and resolved. This study was approved by the Ethics Committee of Zhejiang Cancer Hospital, and was exempted from informed consent.