Colorectal cancer (CRC) is one of the most common malignant cancers in the world, and its annual fatality is the fourth highest in the world (1-3). Although the diagnosis and treatment strategies have improved in recent years, the cure rate remains at a low level. The main reason is that tumor metastasis dramatically increases the recurrence rate (4). So far, the underlying mechanism of CRC metastasis is not clear. Therefore, it is urgent to investigate novel biomarkers and mechanisms for the targeted therapy.

Long non-coding RNAs (lncRNAs) are identified as endogenous cellular RNAs with more than 200 nucleotides in length and lack an open reading frame (5-7). In recent years, more and more studies have shown that lncRNAs play critical roles in many physiological and pathological processes including immune regulation, embryonic development and tumorigenesis (8,9). Zhou et al. (10) have reported that lncRNA-GACAT3 could promote cell proliferation and migration in CRC. LncRNA SLCO4A1-AS1 facilitates the growth and metastasis of CRC through β-catenin-dependent Wnt pathway (11). Therefore, the functions of lncRNA in the growth and metastasis of CRC have become a popular research direction. Long non-coding RNA-differentiation antagonizing non-protein coding RNA (DANCR) is a promising tumor-associated lncRNA, which is up-regulated in various human cancers (12). Liu et al. (13) found that the high expression of lncRNA-DANCR was involved in the progression of CRC. In addition, it has been confirmed that lncRNA-DANCR could promote cell proliferation and metastasis via miR-577 sponging in CRC (14). However, the exact mechanism of lncRNA-DANCR in CRC remains unclear.

The activation of epithelial-mesenchymal transition (EMT) plays a key role in metastatic cascade by increasing cell migration and invasion. EMT is characterized by up-regulation of mesenchymal markers such as vimentin and down-regulation of epithelial markers such as E-cadherin (15,16). In addition, recent studies have confirmed that EMT is a key factor in the distant metastasis of CRC (17). Several researches have confirmed that lncRNAs mediated the growth and metastasis of tumor by regulating EMT process of tumor cells. LncRNA aquaporin could promote the migration and metastasis of intestinal cancer cells via EMT process (18). Guo et al. (19) have found in their research that lncRNA-DANCR could promote the migration of lung cancer cells by activating the EMT process. Therefore, we investigated whether lncRNA-DANCR promotes the growth and metastasis of CRC by activating the EMT process.

A total of 40 CRC tissues and paired adjacent non-cancerous tissue samples were obtained from patients who underwent surgical resection of CRC in our hospital from 2016 to 2018. All tissue samples were collected and stored at −80 °C. This study was approved by the Ethics Committee of our hospital and was conducted in accordance with the Helsinki Declaration and the guidelines of the International Rehabilitation Council for Torture Victims. All the patients recruited signed informed consent.

Wound healing assays were performed as previously described by (20,21). HT-29 cells were inoculated onto 6-well plates (5×105 cells/well) and cultivated at 37 °C. After 24 h, the wound was scratched with a 20 µL pipette tip and washed three times with PBS. The cells were then cultured in Serum free medium at 37 °C. Subsequently, the wound width was then measured under light microscopy at 0 and 24 h.

Transwell assay was performed as previously described (22,23). HT-29 cells (5×105 cells/well) were inoculated to an upper chamber (Corning, USA) and the inserts were coated with Matrigel (BD Biosciences, USA). Six hundred µL of complete medium was present in that bottom chamber. After incubation in 37 °C incubator for 24 h, the non-migratory cells were removed in the upper chamber. The migrated cells were fixed with 4% paraformaldehyde and then stained with crystal violet. The migrating cells were counted in 5 random fields under an optical microscope.

HT-29 cells were collected and inoculated onto the 12-well plates (5×104 cells/well). After 24 h, the cells were washed with PBS three times and 4% paraformaldehyde was added to fix the cells. After 0.4% Triton X-100 was added, the cells were blocked by adding 5% BSA for 30 min, and then incubated overnight at 4 °C with the primary antibodies (E-cadherin, 1:100, Santa Cruz, China; Vimentin, 1:100, Cell Signal, USA). Afterwards, the cells were incubated with Alexa Fluor 488-conjugated secondary antibody (1:500, Invitrogen, USA) in a dark room for 1 h and then washed three times with PBS. Finally, the cells were stained with 4',6-diamidino-2-phenylindole (DAPI, Sigma, Germany) for 5 min and analyzed by the Carl Zeiss Confocal Imaging System (LSM 780, Carl Zeiss, Germany).

Male nude mice (20–25 g, 4–6 weeks) were provided by the Laboratory Animal Center of our hospital. All animal assays were approved by the Ethics Committee of our hospital. The xenograft tumor mice model was established by intravenous injection of transfected HT-29 cells (1×106 cells, 100 µL). The mice were randomly divided into three groups (n=6 per group): the BLACK group (injected cells cultured with medium only), si-NC group (injected cells transfected with si-NC sequence) and si-DANCR group (injected cells transfected with si-DANCR sequence). Seven weeks after injection, the animals were euthanized and lung lobes were removed. The lung lobes were embedded in paraffin, sectioned, and stained with HE. Visible lung metastatic nodules were then observed under a light microscope.

All statistical analyses were performed using SPSS17.0 Statistical Software (Chicago, IL). The results were presented in the form of mean ± standard deviation. The differences between various groups were analyzed by one-way ANOVA followed by the Tukey’s post hoc test, and the data of the two groups was assessed using the Student’s t-test. P<0.05 was considered to be statistically significant. 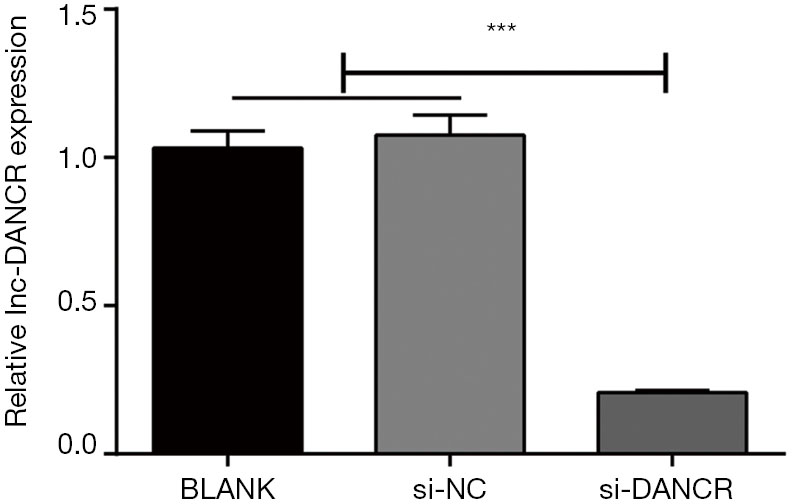 LncRNA-DANCR increased the viability and migration of HT-29 cells

Figure 3 The effects of long non-coding RNA-differentiation antagonizing non-protein coding RNA (lncRNA-DANCR) on HT-29 cell proliferation and migration. (A) Cell proliferation was measured by using the MTT assay. (B) The migration ability of HT-29 cells was determined by wound healing assay. Images were taken after 24 h of incubation. (C) Quantitative data on migration ability. **, P<0.01 and ***, P<0.001.

After 24 hours of transfection, the numbers of HT-29 cells invasions in BLANK, si-NC and si-DANCR group were 85±5, 87±5 and 37±4, respectively. The invasion ability was dramatically inhibited in si-DANCR group compared to BLANK and si-NC group (P<0.001, Figure 4A,B).

Figure 4 The effects of long non-coding RNA-differentiation antagonizing non-protein coding RNA (lncRNA-DANCR) on HT-29 cell invasion ability. (A) Transwell assay was used to detect the invasive ability of HT-29 cells. Images were taken 24 h after incubation and stained with crystal violet (×200). (B) Quantitative data for the invasion ability. ***, P<0.001.

After 72 hours of transfection, the expressions of EMT-related proteins (E-cadherin and Vimentin) were measured by Western blot analysis and immunofluorescence analysis. As seen in Figure 5A,B, the protein expression of vimentin in si-DANCR group was inhibited dramatically, compared with BLANK and si-NC group (P<0.001). On the contrary, E-cadherin protein expression was significantly increased in si-DANCR group compared with BLANK and si-NC group (P<0.001). The same results were observed in the immunofluorescence experiment (Figure 5C). 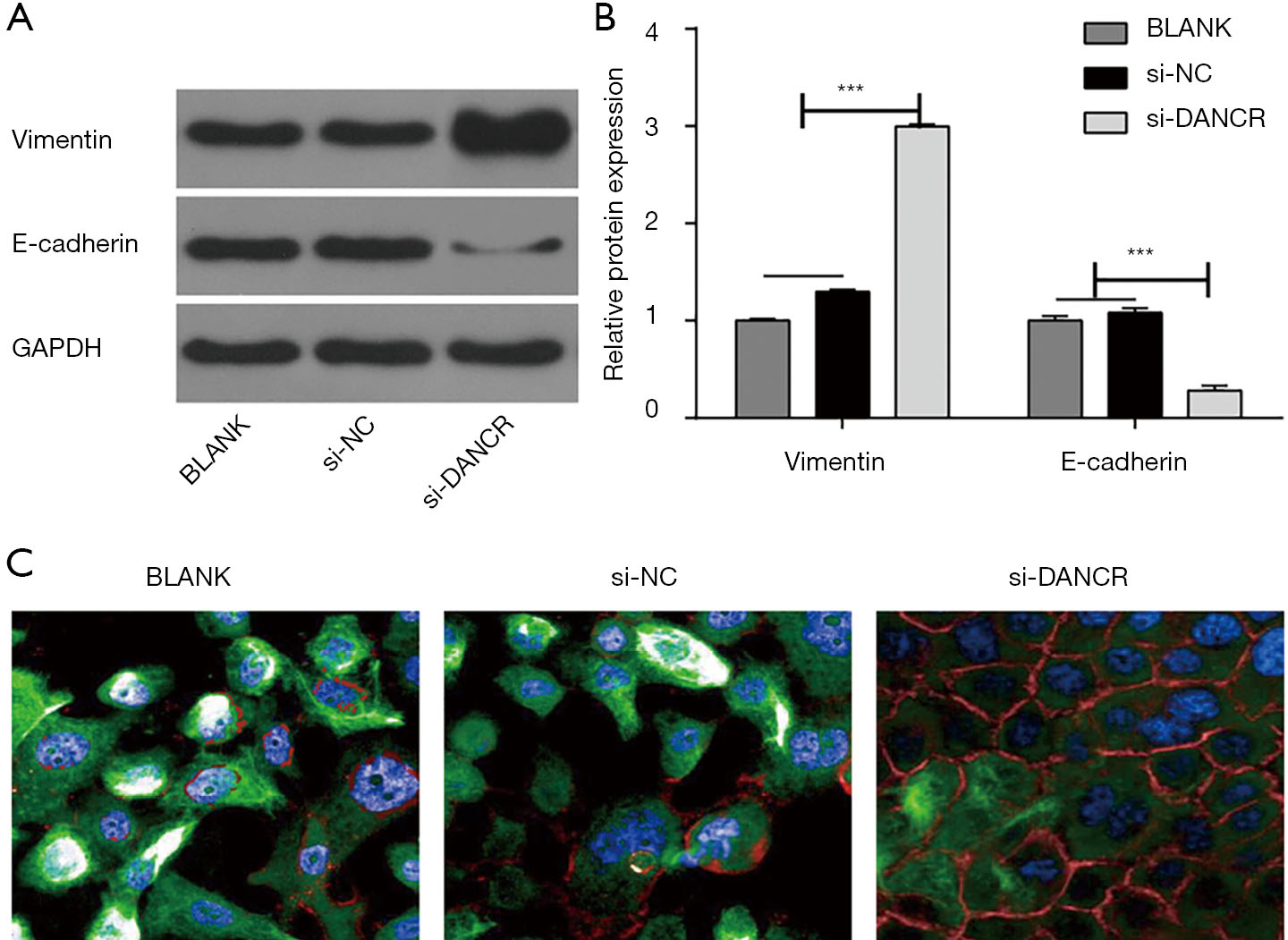 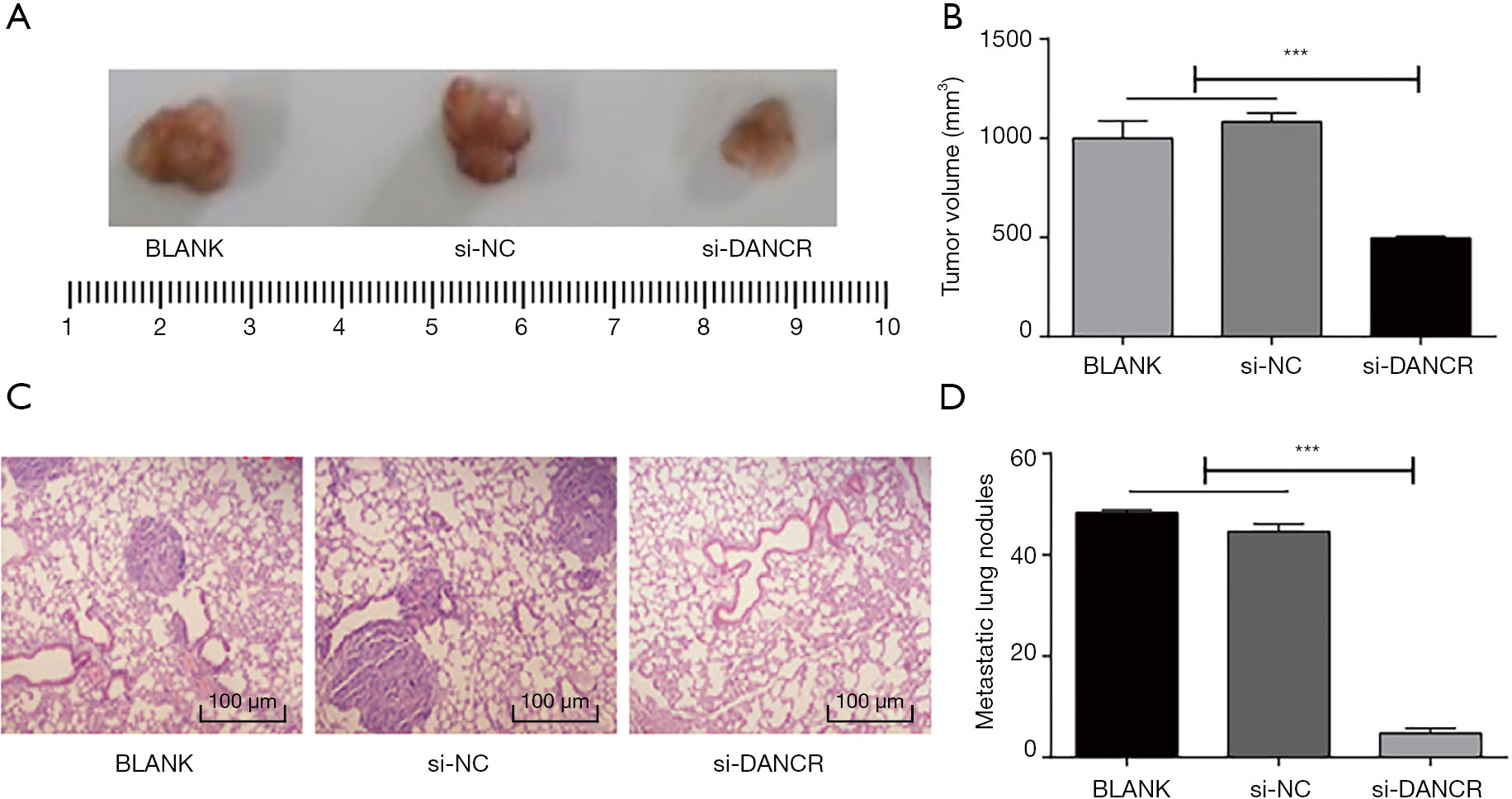 Figure 6 The effects of long non-coding RNA-differentiation antagonizing non-protein coding RNA (lncRNA-DANCR) on lung metastasis of colorectal cancer (CRC) in vivo. (A) Representative image of lung tumors formed in nude mice; (B) the tumor volume growth curves of different groups; (C) representative HE staining results of metastatic nodules in the lung were shown (×400); (D) the number of tumor nodules was counted. ***, P<0.001.

CRC is one of the most common cancers around the world (24). Approximately 1.4 million new cases are identified and almost 694,000 deaths are reported each year (25). Therefore, it is urgent to explore and find new molecular approaches to better understand this disease and identify new therapeutic targets. This study suggests that lncRNA-DANCR may promote the growth and metastasis of CRC by activating the EMT process.

More and more evidences show that lncRNAs are involved in many biological processes and play an important role in the development of diseases (26,27). Abnormal expression of lncRNAs might directly influence the onset and progression of tumors. Recent studies have shown that a variety of lncRNAs play an important role in CRC, thus revealing their potential as novel therapeutic targets. Many researches have suggested that various lncRNAs such as lncRNA SNHG6, lncRNA LOC101927746 and LncRNA SLCO4A1-AS1 are abnormally expressed in CRC (11,28,29). Liu et al. (13) have reported that lncRNA-DANCR is highly expressed in CRC. Our results also confirmed that in human CRC tissues and HT-29 cells, lncRNA-DANCR expression was apparently higher than that in non-CRC tissues and FHC cells. However, it is unclear how lncRNA-DANCR affects the development of CRC. Liu et al. (30) have indicated that lncRNA DLEU1 protects the CRC progression by regulating KPNA3. Gu et al. (31) have reported that long noncoding RNA BCYRN1 promotes the CRC growth by inhibiting NPR3. Lan et al. (32) have proved that the lncRNA OCC-1 inbibits CRC cells proliferation by destabilizing HuR protein. Yu et al. (11) have confirmed that lncRNA SLCO4A1-AS1 promotes the growth of CRC through regulating Wnt/β-catenin pathway. These studies above have suggested that intensive studies of lncRNAs functions are helpful for the diagnostic and therapeutic strategies of CRC. It is reported that lncRNA-DANCR may facilitate CRC cells proliferation and metastasis in CRC (14). Our results showed that silencing lncRNA-DANCR significantly inhibited HT-29 cells proliferation at 1 d, 2 d and 3 d. Moreover, silencing lncRNA-DANCR markedly also suppressed HT-29 cells invasion and metastasis. It was confirmed that lncRNA-DANCR significantly promoted the growth and metastasis of CRC. Interestingly, lung metastasis, being considered as the common target organ, was observed in xenograft tumor mice model. Our study suggests that lncRNA-DANCR could promote lung metastasis and lead to poor disease prognosis.

But how does lncRNA-DANCR exert its functions? That needs to be further explored. It has been preliminarily confirmed by researchers that EMT plays an important role in tumor metastatic by regulating cell migration and invasion D C BramB Geert (33). EMT is a process in which tumor cells differentiate into mesenchymal cells. Tumor cells undergoing EMT process exhibits both morphological and molecular changes, as demonstrated by the low expression of epithelial markers (E-cadherin), and the high expression of mesenchymal markers (Vimentin). Gao et al. (34) have confirmed that lncRNAH19 mediates the chemo-sensitivity of breast cancer cells via the EMT process. Li et al. indicate that long noncoding RNA XLOC 010588 could regulate the progression of CRC via the EMT process (35). It is reported that lncRNA PlncRNA-1 could induce the activation of epithelial mesenchymal transition in CRC cells (36). Moreover, Guo et al. (19) have found that long noncoding RNA DANCR could promote the progression of lung cancer by activating the EMT process. Therefore, we investigated whether lncRNA-DANCR might promote the growth and metastasis of CRC by activating the EMT process. Both western blot and immunofluorescence analysis results showed that silencing lncRNA-DANCR significantly increased the expression of E-cadherin. On the contrary, silencing lncRNA-DANCR markedly inhibited vimentin expression. Those evidence suggested that lncRNA-DANCR could promote the growth and metastasis of by activating the EMT process.

Ethical Statement: The authors are accountable for all aspects of the work in ensuring that questions related to the accuracy or integrity of any part of the work are appropriately investigated and resolved. This study was approved by the Ethics Committee of our hospital and was conducted in accordance with the Helsinki Decla-ration and the guidelines of the International Rehabilitation Council for Torture Victims. All the patients recruited signed informed consent.