Regarding to mucinous adenocarcinoma, there were four disease categories: Retention mucoceles, Cystadenomas, cystadenocarcinomas and Mucinous adenocarcinomas without mucocele (1). Appendiceal mucocele is a rare lesion which represents cystic dilation of appendiceal lumen due to accumulation of mucous (2). Appendiceal mucocele accounted 0.2–0.4% of appendectomies (3,4) and it can be classified into three groups (5,6): (I) focal or diffuse mucosal hyperplasia, with no epithelial atypia and mild distention of the lumen; (II) mucinous cystadenoma, exhibiting some degree of epithelia atypia and marked distention of the lumen; (III) mucinous cystadenocarcinoma, with stromal invasion by glands and/or epithelial cells in peritoneal implants. The clinical manifestation is non-special. It may present with abdominal pain, nausea, vomiting, mass of ovary, intestinal obstruction, ureteral compression and so on (7). Due to the absence of characteristic clinical symptoms and some of which may be manifestations of abdominal internal hernia, it needs comprehensive examinations to diagnose (8). Well, regarding to abdominal internal hernia, there are characteristic signs of CT scan, so generally it can be confirm diagnosed by the CT scan (9). Herein we present a case of appendiceal mucinous cystadenoma presenting as abdominal internal hernia to provide much more information for clinical diagnosis and therapy.

A 70-year-old man was admitted to our emergency room for abdominal pain with nausea and vomiting, accompanied with abdominal distension for 4 days. The patient had been treated conservatively in local hospital, however, without any improvements. He denied family history of colorectal cancer or inflammatory bowel disease. Physical examination showed soft abdomen with tenderness in upper and right lower quadrant, without peritoneal irritation sign, and there was no palpable abdominal bump. No special sign was showed on ultrasound except dilation of intestine. CT scan (Figure 1) was taken when transferred and there were no signs of significantly expanded intestine segments. Tumor markers including CEA (carcinoembryonic antigen, CEA), AFP (alpha fetoprotein), CA199 (cancer antigen 199, CA199), CA125 (cancer antigen 125, CA125), CA242 (cancer antigen 242, CA242) were tested to evaluate whether there was tumor and the results were all in normal range. Full blood count showed normal range of white blood cell and neutrophils, so conservative support care was applied. Unfortunately, the pain aggravated and peritoneal irritation sign came out the next day. Ultrasound was taken and the results showed that expansion of abdominal intestinal canal and enhanced CT (Figure 2) was taken immediately which implied incomplete intestinal obstruction with volvulus of partial small intestine in right lower quadrant, and internal hernia was suspected. 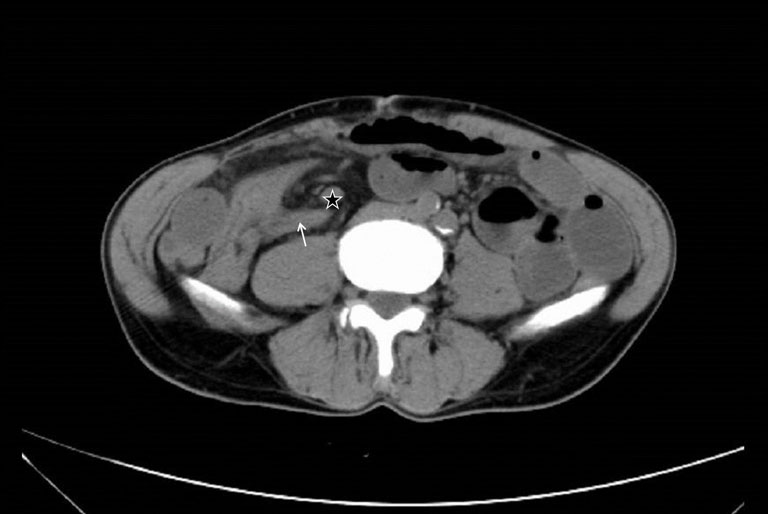 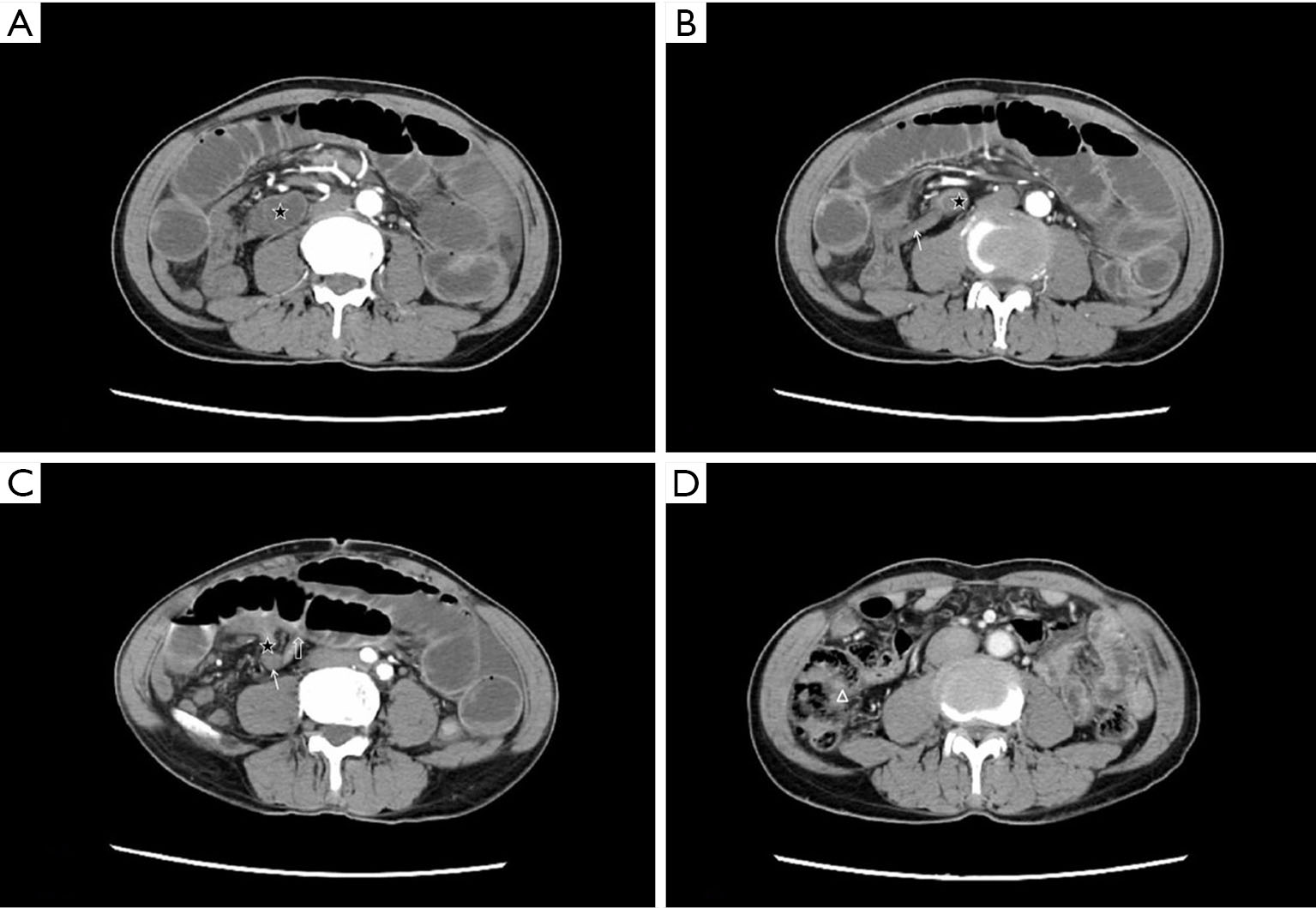 The patient met the indications of operation and an emergency surgery was conducted to relieve these symptoms. A median incision was performed. It was found that the tip of appendix, which was in normal morphology, was adhered to the intestine that about 110 cm to the ileocecum and thus formed a hernia ring. Some segments of intestine and colon fell into the ring as hernia contents. The blood supply of intestine and colon which formed hernia contents was normal. No bumps or ascites was found. The adhesion was dissected, and appendectomy was proceeded routinely. The postoperative pathologic diagnosis was mucinous cystadenoma with negative cutting margin (Figure 3). 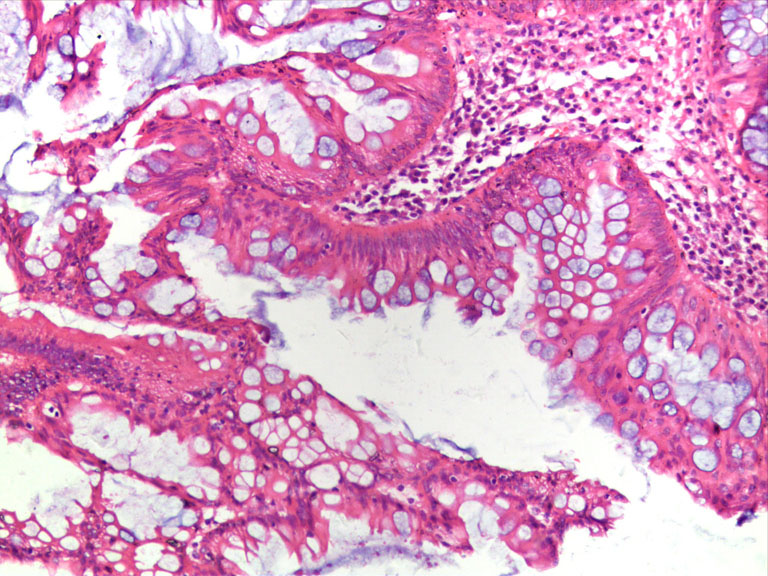 Figure 3 Postoperative pathology of lesion. HE: ×200.

Patient returned to the ward with stable vital signs after surgery. All symptoms and physical signs of mucinous cystadenoma disappeared. The patient was discharged from hospital without any complications after one week. During three-year follow-up, the patient was in good condition and without signs of recurrence. In the 33rd month, CT-scan (Figure 2D) was performed again to evaluate the patients’ condition and the results showed that the morphology of intestine was normal and without cystic dilation.

Appendiceal mucinous cystadenoma is characterized by cystic dilation of appendiceal lumen due to accumulation of mucous. Well, in this case, the pathogenesis and related examination including ultrasound and CT scan of the patient didn’t support the diagnosis of appendiceal mucinous cystadenoma (10-12). Instead, ultrasound was taken to evaluate the patient’s situation and the results showed that expansion of abdominal intestinal canal which support the diagnosis of abdominal internal hernia (13,14) and the CT scan indicated that the patient was diagnosed with suspicion as abdominal internal hernia for the reason that it showed the typical changes include abnormal shape of intestines, translocated position, gathered intestinal loops with different forms and centralized blood vessels and shrinking mesenteries at the entrance of hernia (15,16), so the patient was diagnosed as abdominal internal hernia at first according to the symptoms, signs and imaging examination.

The preoperative imaging diagnosis is very important because it will guide the operation, evaluate the situation and help doctor to make the correct decisions under that condition (17-19). Regarding to this patient, we gave conservative treatment based on the preoperative imaging test and there was no improvements after conservative treatment. Then we conduct an operation for the patient. Although the diagnosis was almost clear, we found it may be another disease during the operation as describes in another case (20,21). As the appendix may be sheltered by inflated bowls which would present an illusion of abdominal internal hernia and US examination would not reveal the actual disease as in our case, so CT scan is very important and necessary.

Clinically, there were many imaging manifestations for appendiceal mucinous cystadenoma, like curvilinear mural calcification and so on (22-30). And usually the benign and malignant could be told with the typical features of CT which is the enhancing nodular lesion in the wall (25,31,32). Regarding to the diagnosis of appendiceal mucinous cystadenoma, ultrasound shows the location of mucocele which usually situated at the proximal appendiceal orifice causing distal lumen obstruction (30) and CT scan, the most helpful imaging examination (5,33), shows the density of contents, complications like inflammation and compression, relationship between peri appendiceal tissue and pseudomyxoma (34). And appendiceal mucinous cystadenoma should be differentially diagnosed from ovary cyst, lymphocele, abscess, enteric duplication cyst, hematoma and hydrosalpinx (25,35). However, there is no typical US or CT sign in our case for the reason that the patient was in early stage of the disease when taken these examinations.

Operation should be proceeded gently in case of iatrogenic rupture of the cystadenoma and spreading of mucin to form pseudomyxoma peritonei. The surgical treatment should be based on the finding of tumor and the suspected pathology (36-38). Simple appendicectomy is advised for small, uncomplicated lesions while the right hemicolectomy and caecum resection is recommended for mucoceles with a diameter greater than 2 cm and positive margin at the appendectomy site (5,37-40). The five-year survival rate is almost 100% for benign pattern while varies from 30% to 80% for malignant forms respectively (5).

To our best knowledge, no case of mucinous cystadenoma of appendix presenting as abdominal internal hernia has been reported. Abdominal internal hernial may cause disorder of blood circulation and result in necrosis of intestine, severe peritonitis, sepsis and so on. Therefore, it is very important to identify the lesion before the following treatment. Although the technology is advanced, physical examination must not be disregarded in emergency case. It can show the change of abdominal disorder dynamically.

Mucinous cystadenoma of the appendix is rarely diagnosed before operation. It can present many nonspecific types of sign. In diagnostic procedure, abdominal sign should be noticed continuously and enhanced CT scanning is helpful to identify the disease. Surgical procedure must be very careful to prevent iatrogenic rupture of the mucocele and avoid spreading mucin to peritoneal cavity.