Liposarcoma is one of the most common primary retroperitoneal malignancies, accounting for approximately 10% of all soft tissue sarcomas. Due to the lack of significant anatomical space in the retroperitoneal cavity, these tumors typically grow to a large size and involve adjacent structures. Pathologically, retroperitoneal liposarcoma (RPLS) is currently classified into four types based on morphological features and cytogenetic aberrations, which are well-differentiated, dedifferentiated, pleomorphic, and mucin-like/round cells. Low-grade liposarcoma (well-differentiated and myxoid) has a high local recurrence rate but a low metastatic rate. Modern imaging techniques are critical for diagnosis, type, stage, and follow-up. At present, the most important treatment for liposarcoma is still complete resection, and the effect of adjuvant therapy is controversial.

A 70-year-old woman was admitted with a complaint of abdominal enlargement after nine months of RPLS resection. She complained of nausea, vomiting, and a weight gain of 5 kg. In the past three years, she had undergone four RPLS resections (September 2014, May 2015, October 2016, December 2016). She did not receive any adjuvant radiotherapy or chemotherapy after each operation. The physical examination revealed a large, soft, amorphous mass that extended down from the xiphoid to the pelvis, with a circumference of 93 cm and severe edema in the lower extremities. Laboratory findings and tumor markers were within the normal range. Computed tomography revealed a large amount of homogeneous retroperitoneal fat density extending down the subhepatic region to the pelvic cavity, moving the intraperitoneal structure to the left side of the abdomen (Figure 1).

Figure 1 Computed tomography scans of the abdomen. A large homogeneous retroperitoneal mass displacing retroperitoneal structures dorsally with the largest diameter being 40×37×26 cm with the internal organs being pushed aside.

In laparotomy, a giant amorphous and jelly mass was found that filled the abdominal cavity. After surgical exploration, the huge mass could be separated from two parts (abdominal part and pelvic part). We resected both masses completely. Meanwhile, another smaller mass was found and resected; all the above masses arose from the retroperitoneal space. Tumors measuring 55×40×20 cm were removed and weighed 28 kg (Figure 2).

Figure 2 Intraoperative picture of the mass after laparotomy. The tumor was capsulated; the excised tumor was 55×40×20 cm and weighed 25 kg. The black bar in the section (B) is 10 cm.

The postoperative pathological report indicated myxoid liposarcoma. Immunohistochemical staining showed that this tumor was negative for STAT60, CD99, MDM2, SMA, and desmin, but positive for CDK4, CD34, Bcl-2, and S-100. The patient was treated without any adjuvant therapy, experienced no postoperative complications, and was discharged 1 week after surgery. The patient presented no evidence of recurrence during follow-up by CT.

Liposarcoma is the most frequent type of adult sarcoma, accounting for approximately 15% of soft-tissue sarcomas. Liposarcoma originates from multipotential mesenchymal cells, which are usually present in the lower extremities, and the retroperitoneum, inguinal, or paratesticular regions (1,2).

For pathology, retroperitoneal liposarcoma is currently classified into four types: well-differentiated, dedifferentiated, myxoid/round cell, and pleomorphic (7). However, a minority of cases (5% to 10%) show a combination of two or three components (so-called mixed-type liposarcoma). Well-differentiated liposarcoma is the most common histological subtype, followed by myxoid liposarcoma (8). Low-grade liposarcoma (well-differentiated and myxoid) is unique and has a high rate of local recurrence but a low rate of distant recurrence. It is typically locally aggressive and has a tendency to recur after surgical excision even if no tumors have been initially resected with free margins. Low-grade liposarcoma also does not metastasize and very rarely dedifferentiates (9,10). In our case, considering the high rate of local recurrence, we advised the patient to take adjuvant radiotherapy or chemotherapy; however, the patient refused. It has been increasingly important to regularly complete the follow-up.

The principle treatment for liposarcoma is complete resection. It is generally agreed that the most important factor influencing survival outcome of RPLS is the surgeon’s skill in resecting the tumor completely (11). In our reviewed cases, just one case did not have complete resection (R2) and was the only death that occurred during the follow-up time. In addition, tumor histology, negative margins after surgery, metastases, and tumor size are independently associated with disease-specific survival, patients with decreased local recurrence rate after adjuvant therapies (12), and patients with local recurrence having lower survival rates (9).

We were also first to review the cases reported in the literature published in PubMed regarding giant RPLS (weight over 20 kg) in the last 10 years. The clinical data are summarized in Table 1 (13-24). We found that only there are only 12 cases reported. There were 7 males (58.3%), 4 females (33.3%) and one case had no available gender data, with a median age of 55.6 years (39–72 years). Among these 12 cases with a median weight of 32.25 years (22–46 years) kilograms, 7 cases (58.3%) are heavier than ours. In our reviewed cases, there are 6 cases (50%) of well-differentiated liposarcoma, 3 cases of (25%) dedifferentiated liposarcoma, 2 (16.7%) cases of mix-type liposarcoma, and 1 case of myxoid liposarcoma. The unique myxoid liposarcoma is a 63-year-old female, who underwent adjuvant chemotherapy after complete surgical resection. We found that there was no evidence of recurrence or death after surgery fir 2 years. Furthermore, in the 12 cases, only Amir’s case did not have complete resection (R2 resection), and this patient died after 6 months. We recommend that surgical resection still be the first choice in the liposarcoma therapy. 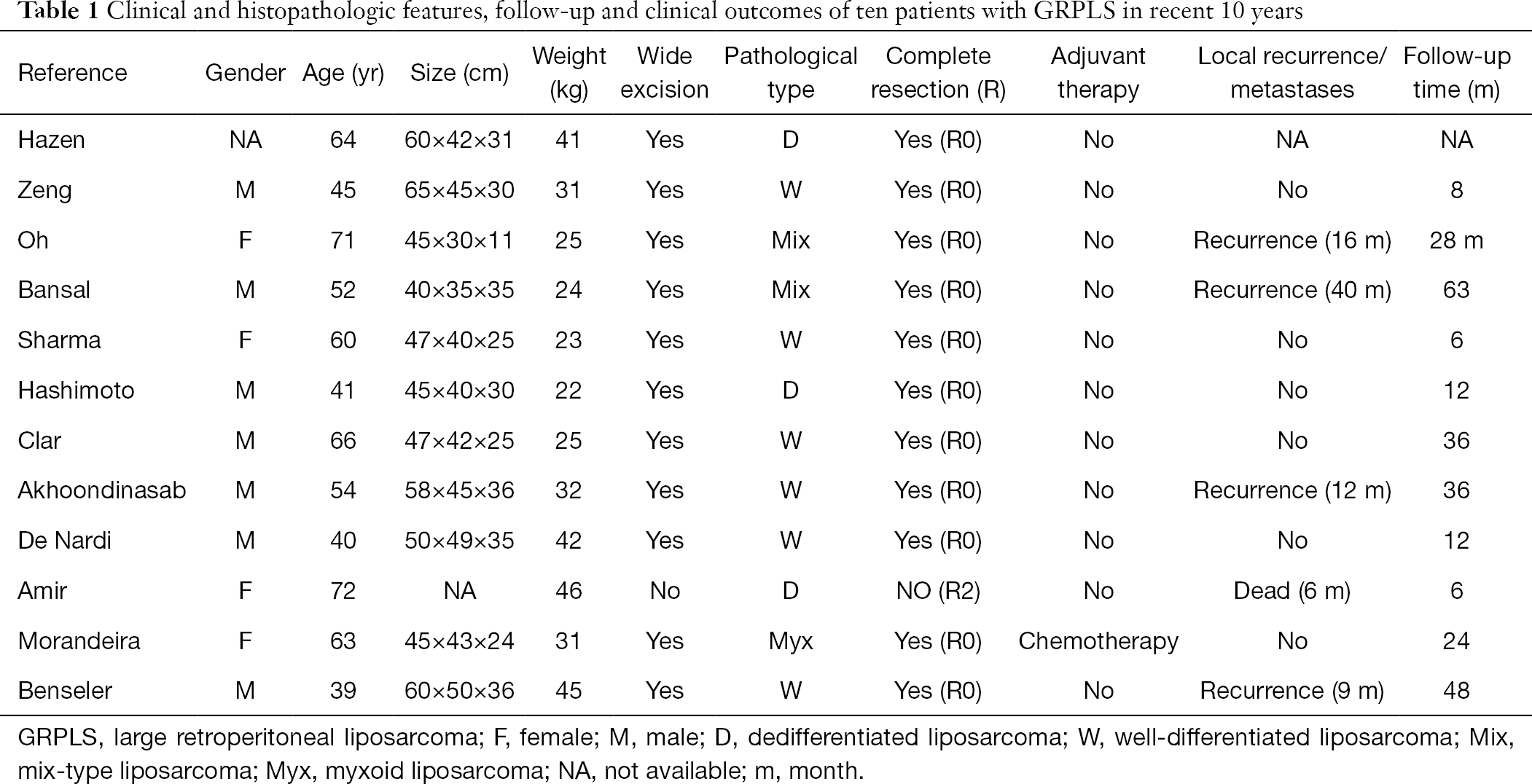 We here report a case of a recurrent giant retroperitoneal myxoid liposarcoma in a 70-year-old female who was admitted with a complaint of an emergent abdominal enlargement. Computed tomography showed a large retroperitoneal mass from the subhepatic area down to the pelvic cavity. After laparotomy, the masses measured 55×40×20 cm and weighed 28 kg. Postoperative pathological report showed myxoid retroperitoneal liposarcoma. Considering myxoid liposarcoma has a high rate of local recurrence but a low rate of distant metastasis, postoperative radiotherapy may improve local control. However, there was no adjuvant therapy in our case, and this may induce a bad prognosis, although we have advised the patient to take adjuvant therapy. A long-term follow-up examination is absolutely necessary as well.