Bone is the most common site for metastasis in breast cancer (BCa) (1). In about 20% of the patients, tumors of the breast metastasize to the bone. Moreover, bone metastasis (BM) occurs in more than half of the cases showing distant metastases (2). Additionally, up to 70% of the patients who succumb to BCa show evidence of metastatic bone disease, post-mortem (3). BCa patients with first BM have a median survival time of about 20 months, and a 10% 5-year survival rate (4). Whereas, the 5-year survival rate for BCa patients with singular or oligometastatic bone disease is in the favorable range of 58.4–83% (5-7).

The treatment of patients with BM includes the systemic administration of antitumor and antiresorptive agents, and/or localized radiation therapy (RT), radiofrequency ablation, and surgery. RT especially plays an important role due to the radiosensitivity of BCa cells (8). Pain, limited movements, risk of fracture, after surgical intervention, and spinal cord compression are the indications for palliative RT (9). While pain relief is generally observed within a few days after the start of RT, radiologically detectable recalcification and stabilization commence at the earliest within 6–12 weeks after termination of RT. Moreover, asymptomatic patients with favorable prognostic factors can be treated using RT (10). Furthermore, high-dose RT may provide long-term localized control from skeletal manifestations and improve the overall survival (OS) of patients with oligometastases.

Here, we have described RT for the treatment of patients with oligometastatic bone disease in other primary sites and in BCa, and the future perspectives.

RT for oligometastatic bone disease in other primary sites

Some studies have opted RT for oligometastatic bone disease in other primary sites (Table 1) (11-20), and 8 of these 10 studies have used stereotactic body radiation therapy (SBRT). Sixty-seven percent of Grade ≥3 toxicities were fractures requiring a surgery. Overall, they resulted in excellent outcomes with mild toxicities. 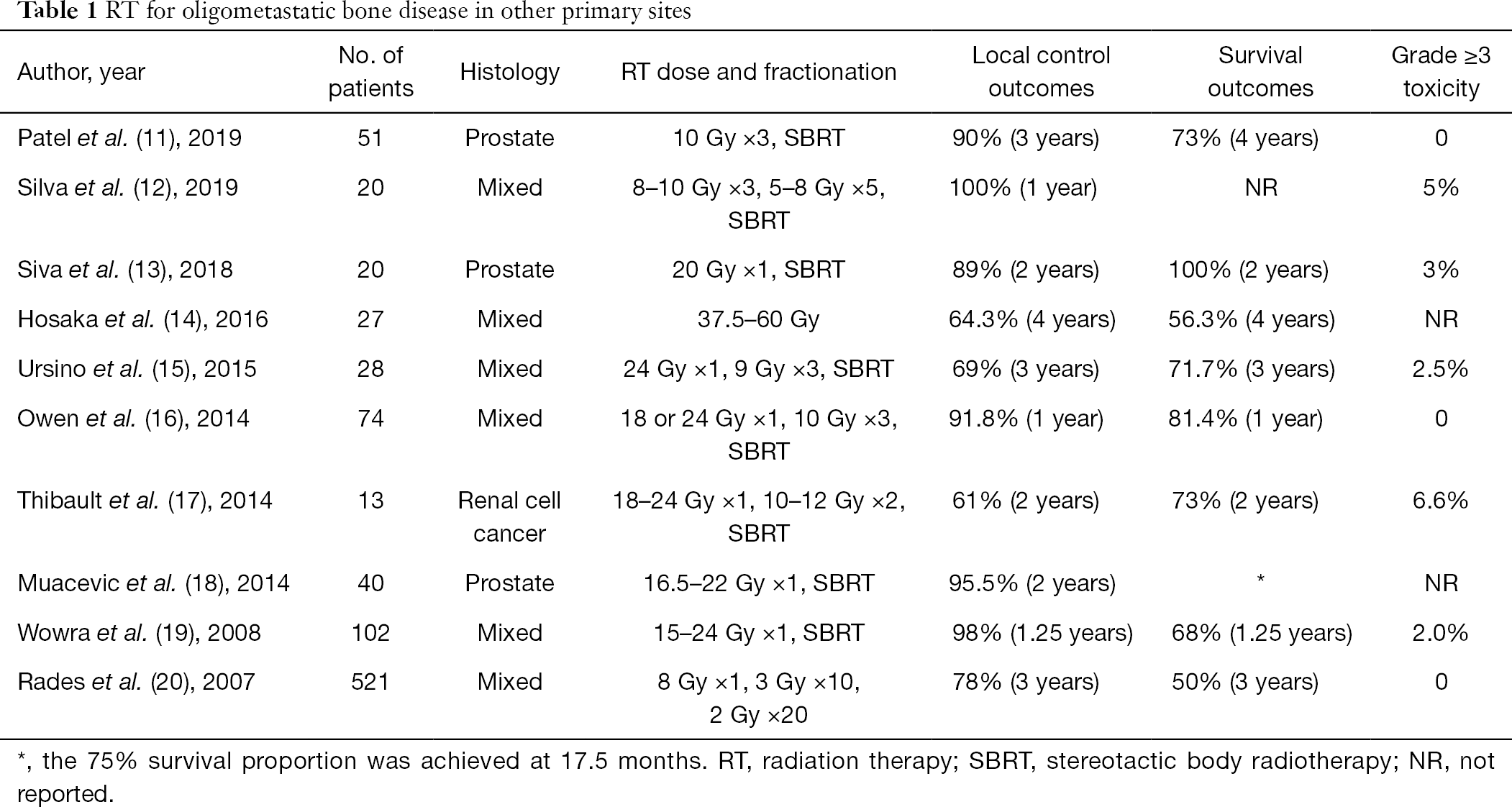 Several studies recommend SBRT for treatment of oligometastatic bone disease (22-31).The American College of Radiology Appropriateness Criteria suggests that aggressive local therapy of oligometastatic spine disease may provide survival benefit to the patients, although additional data would be required to understand the role of highly conformal RT techniques that allow for radiation dose escalation (32). The evidence-based guidelines of The American Society for Radiation Oncology (ASTRO) do not describe the use of curative intent SBRT for treatment of oligometastatic bone disease (33). Instead, the guidelines suggest that eligible patients with metastases to the spine be considered for available SBRT trials to clarify the role of optimal treatment approach.

Few studies suggest RT for treatment of patients with oligometastatic bone disease in BCa (Table 2) (5-7,19,34). In these studies, only a single patient presented grade 3 acute dermatitis with grade ≥3 toxicity. Overall, patients received a high radiation dose that resulted in favorable outcomes, and mild toxicities. Here, Milano et al. (5) reported that the 5- and 10-year OS rates after SBRT were 83% and 75%, respectively, for bone-only patients vs. 31% and 17%, respectively, for other patients (P=0.002). Next, Rades et al. (20) suggest that the outcomes were most favorable in patients with myeloma/lymphoma followed by those with BCa, and that none of the BCa patients showed progression of motor deficits. Additionally, Yoo et al. (34) reported that high-dose RT (≥50 Gy10) and HER2-negative status were significantly associated with improved local control, and Takemoto et al. (7) reported that local recurrence was observed in a patient treated with 3 Gy ×10 irradiation, the lowest dose among the eleven patients.

In a prospective study by Owen et al. (16), 74 patients with non-spine bone oligometastases (inclusive of 8% BCa) treated with SBRT were administered 18 Gy or 24 Gy in a single fraction, or 30 Gy in 3 fractions. Of these, six patients with BCa did not present with local recurrence, although seven of 68 patients with other primary sites did. Also, the number of metastases at simulation (<5 vs. >5 metastases) was associated with reduced median OS post SBRT (10.8 vs. 6.4 months; P<0.0001). Next, in a retrospective study by Kobayashi et al. (35), 35 of 75 patients with oligometastatic BCa (39% bone) were treated with systemic chemotherapy plus metastasis-directed surgery or RT, and 40 patients were treated with systemic chemotherapy only. The 10- and 20-year OS rates were 82% and 53%, respectively in patients with multidisciplinary treatments vs. 42% and 23%, respectively in patients treated with systemic therapy alone (P=0.0063). Jacobson et al. (36) analyzed the number of sites of initial involvement identified in radionuclide bone scans in relation to long-term outcome in 113 BCa patients with bone as the sole initial site of metastatic disease. Median survival from time of recurrence and time of original diagnosis for the three bone scan categories was one lesion (n=47), 53 and 86 months; two lesions (n=22), 38 and 68 months; and ≥3 lesions (n=44), 22 and 58 months (P<0.0001 and P<0.005 for 1 and 2 lesions vs. ≥3).

Technically, the gross tumor volume (GTV) is the tumor visible in the magnetic resonance imaging (MRI) scans. In clinically suspected intradural extension, contrast-enhanced MRI is recommended to delineate the meningeal enhancement and is included in the GTV. The clinical target volume (CTV) includes the GTV with an adequate (e.g., 1–2 cm) margin. Of note, the CTV should always include the complete vertebral body in case of vertebral body involvement. In the case of unaffected compacta, extension of the CTV beyond the compacta is discouraged (8). The planning target volume (PTV) margin differs based on factors such as the use of image-guided radiotherapy (IGRT) or not, the method of IGRT, reproducibility, and respiratory motion. Furthermore, the three-dimensional (3D) treatment planning is essential, especially for lesions of the trunk, because the treatment of oligometastatic bone disease requires high-dose RT and checking the irradiated dose and volume of adjacent normal tissue.

Based on the current scenario, combined use of RT and immune checkpoint inhibitors (ICI) may enhance the antitumor immune response and produce a synergistic effect (38). The randomized double-blind international phase III PACIFIC trial (39) compared the effect of durvalumab as consolidation therapy with placebo in 713 patients with stage III locally advanced unresectable non-small cell lung cancer after treatment with platinum-based definitive chemoradiotherapy. The 24-month OS rate was 66.3% in the durvalumab group, as compared to 55.6% in the placebo group (two-sided P=0.005). Durvalumab significantly prolonged OS, as compared with placebo (stratified hazard ratio for death, 0.68; P=0.0025). Chicas-Sett et al. in their systematic review discussed the effect of combined RT and ipilimumab in patients with metastatic melanoma (40), where a survival benefit of eight months in favor of the RT plus ipilimumab combination was observed in comparison with the median OS of 11.4 months in the pooled analysis of phase II and III trials of ipilimumab without RT.

Furthermore, there are several ongoing and completed clinical trials combining RT and ICI in metastatic BCa patients (41). In future, the combined use of RT and ICI may serve as a promising therapeutic option against oligometastatic bone disease in BCa.

Conflicts of Interest: All authors have completed the ICMJE uniform disclosure form (available at http://dx.doi.org/10.21037/tcr.2020.01.35). The series “Loco-regional therapy for metastatic breast cancer” was commissioned by the editorial office without any funding or sponsorship. The authors have no other conflicts of interest to declare.